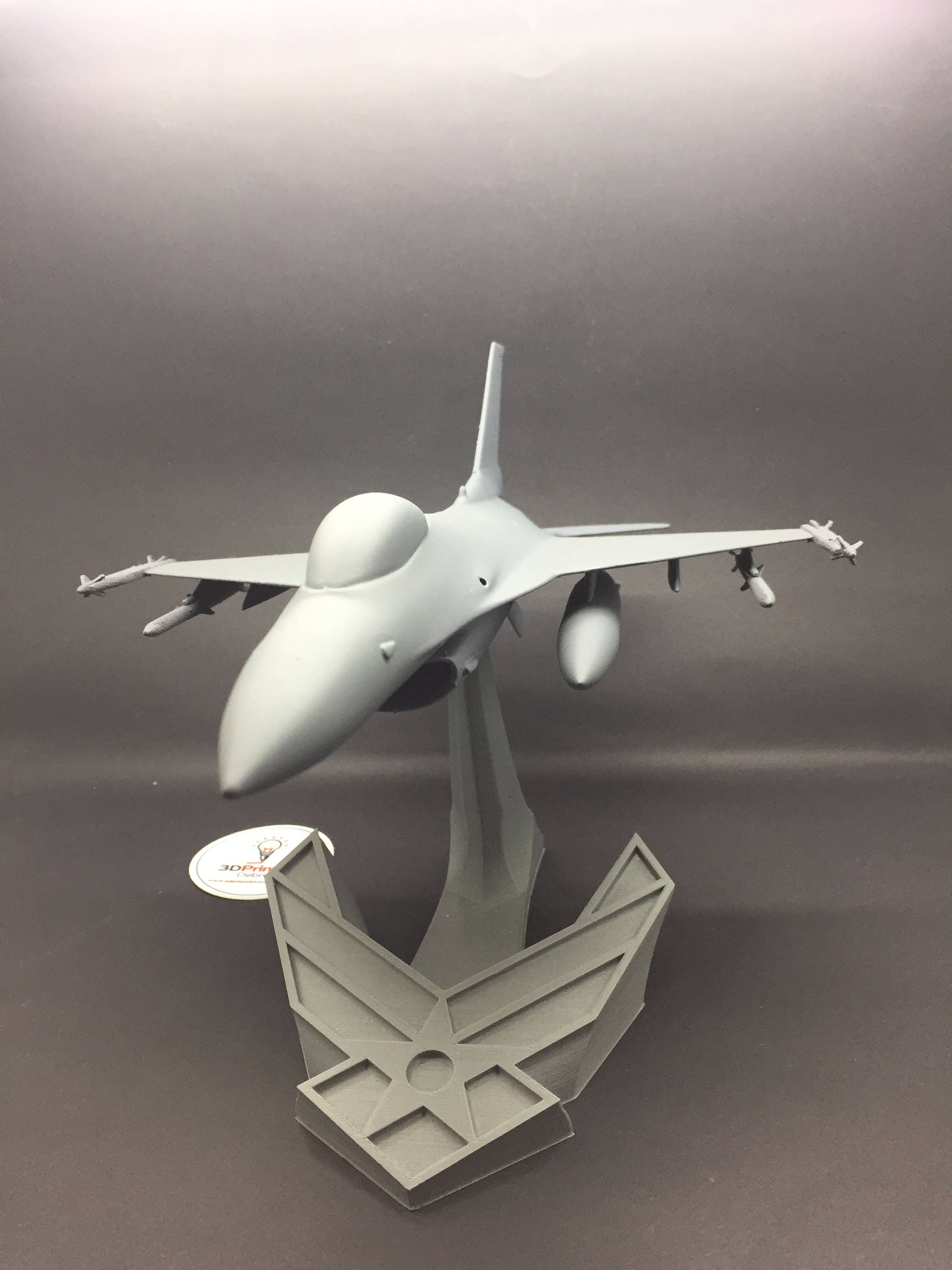 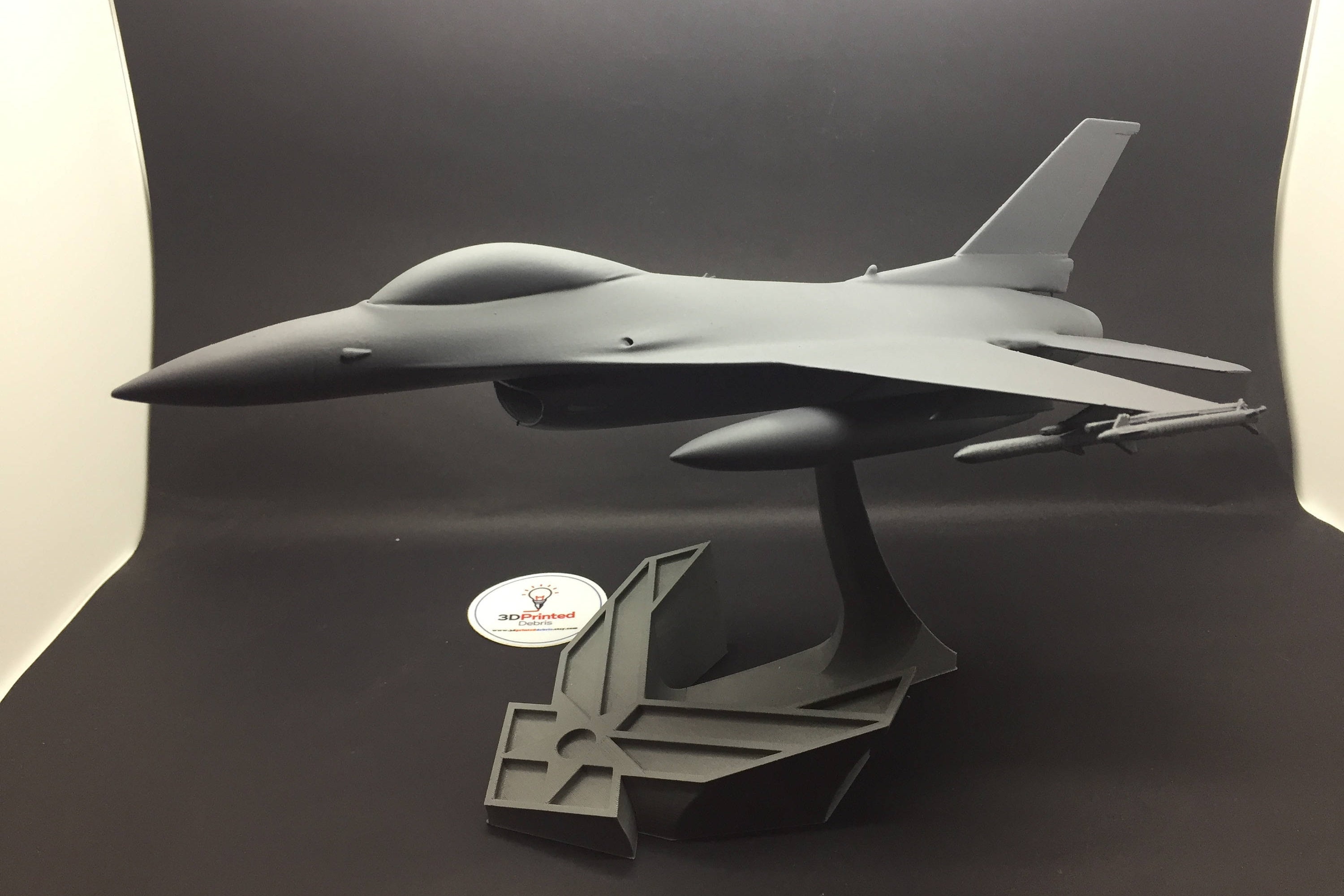 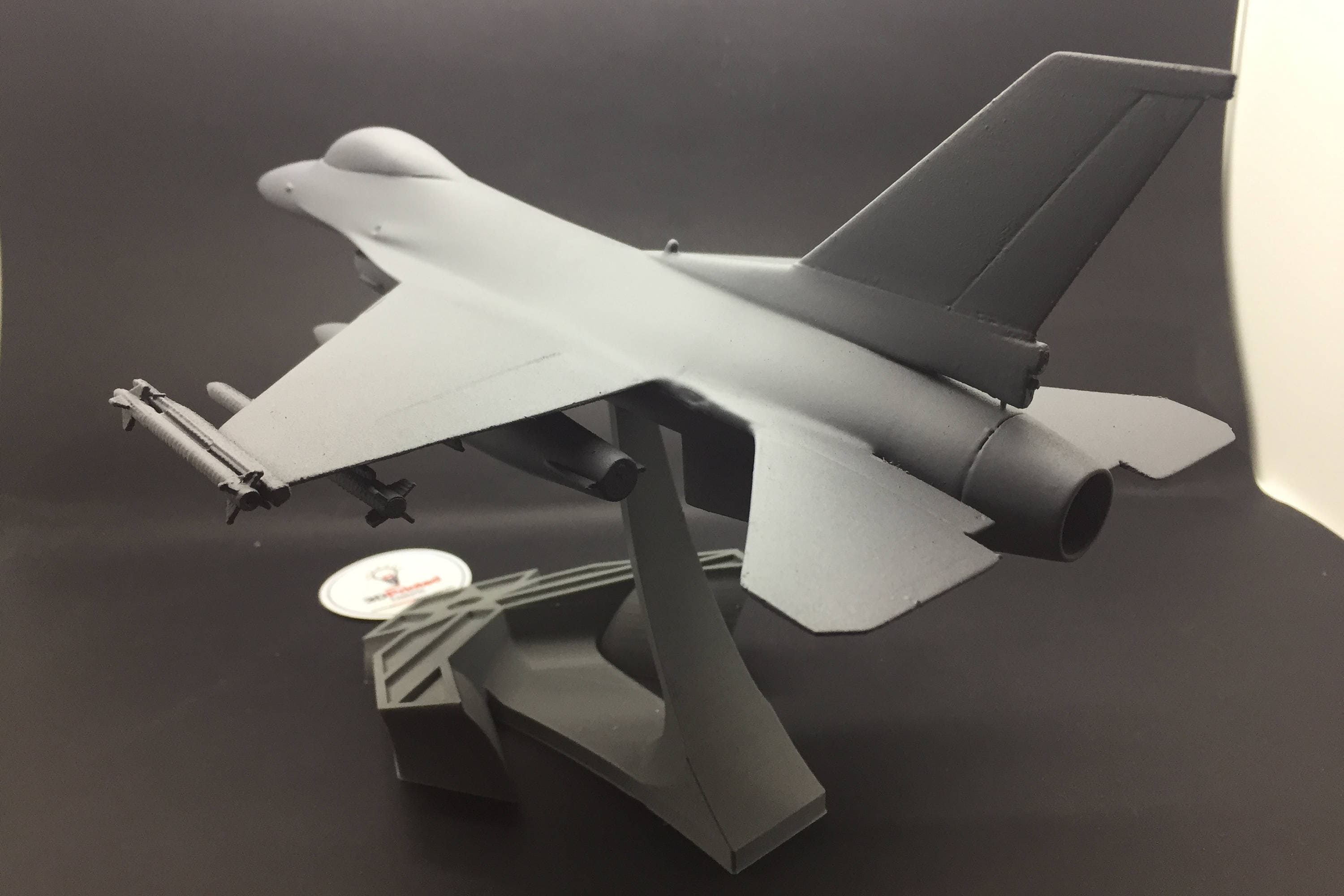 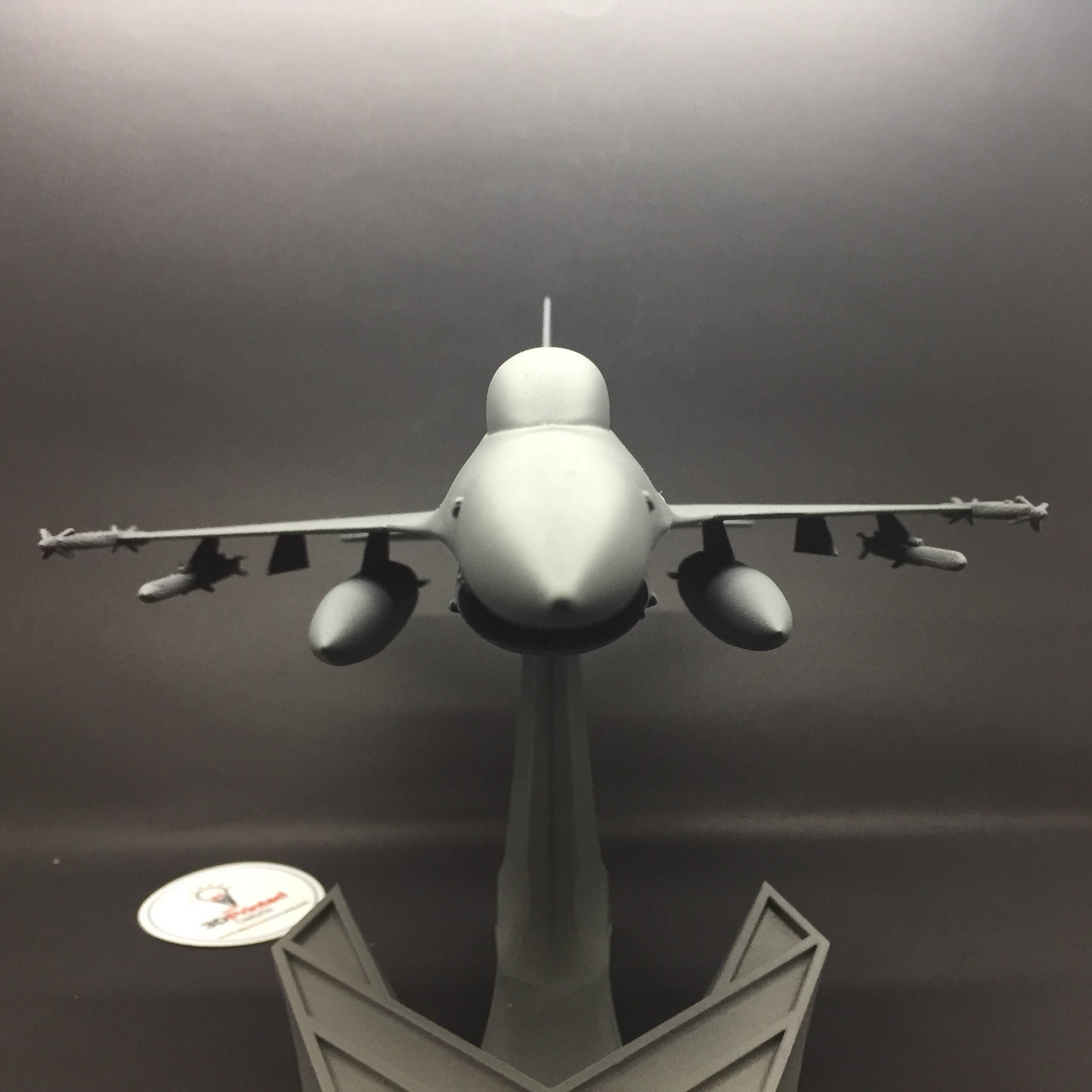 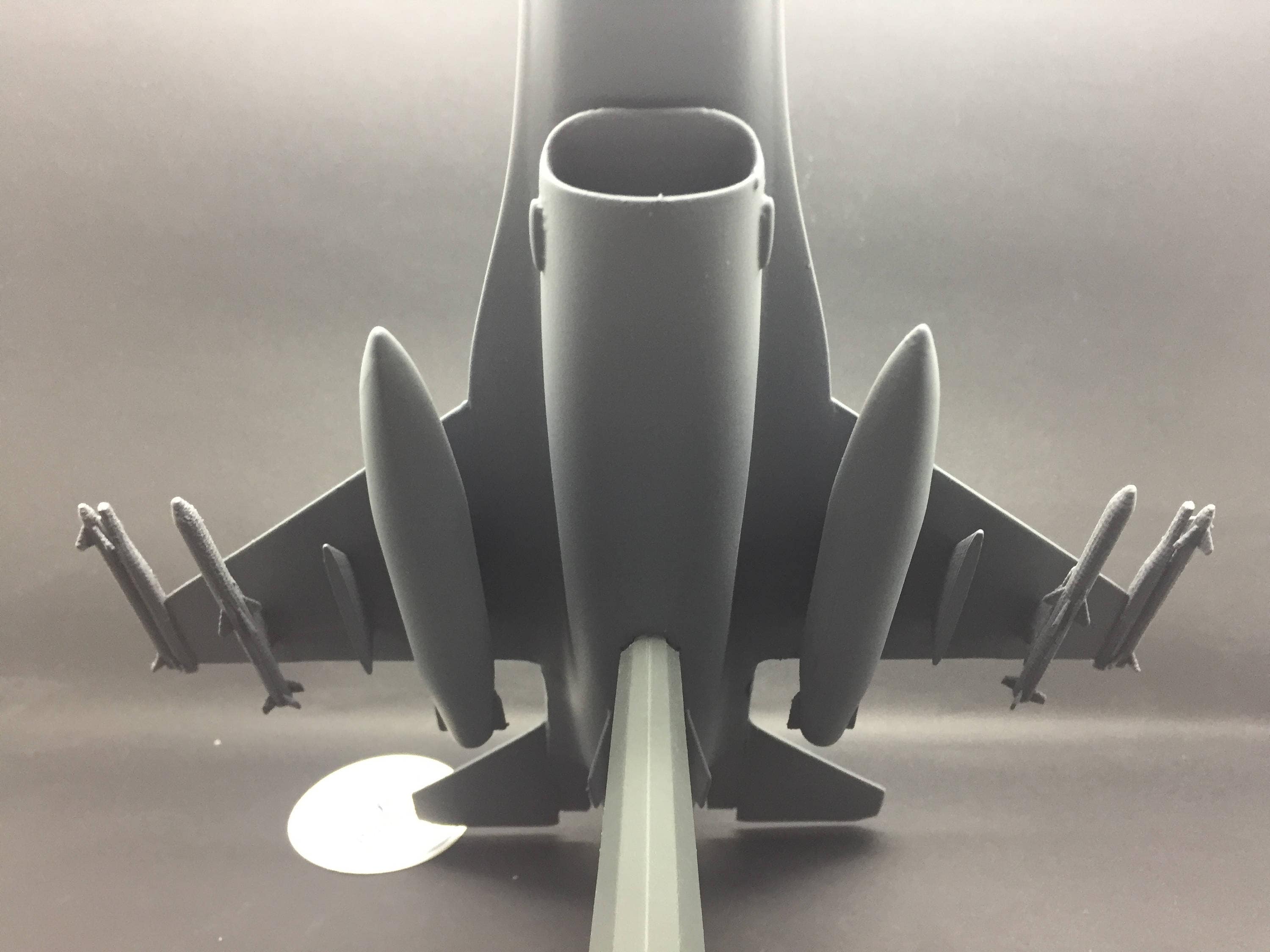 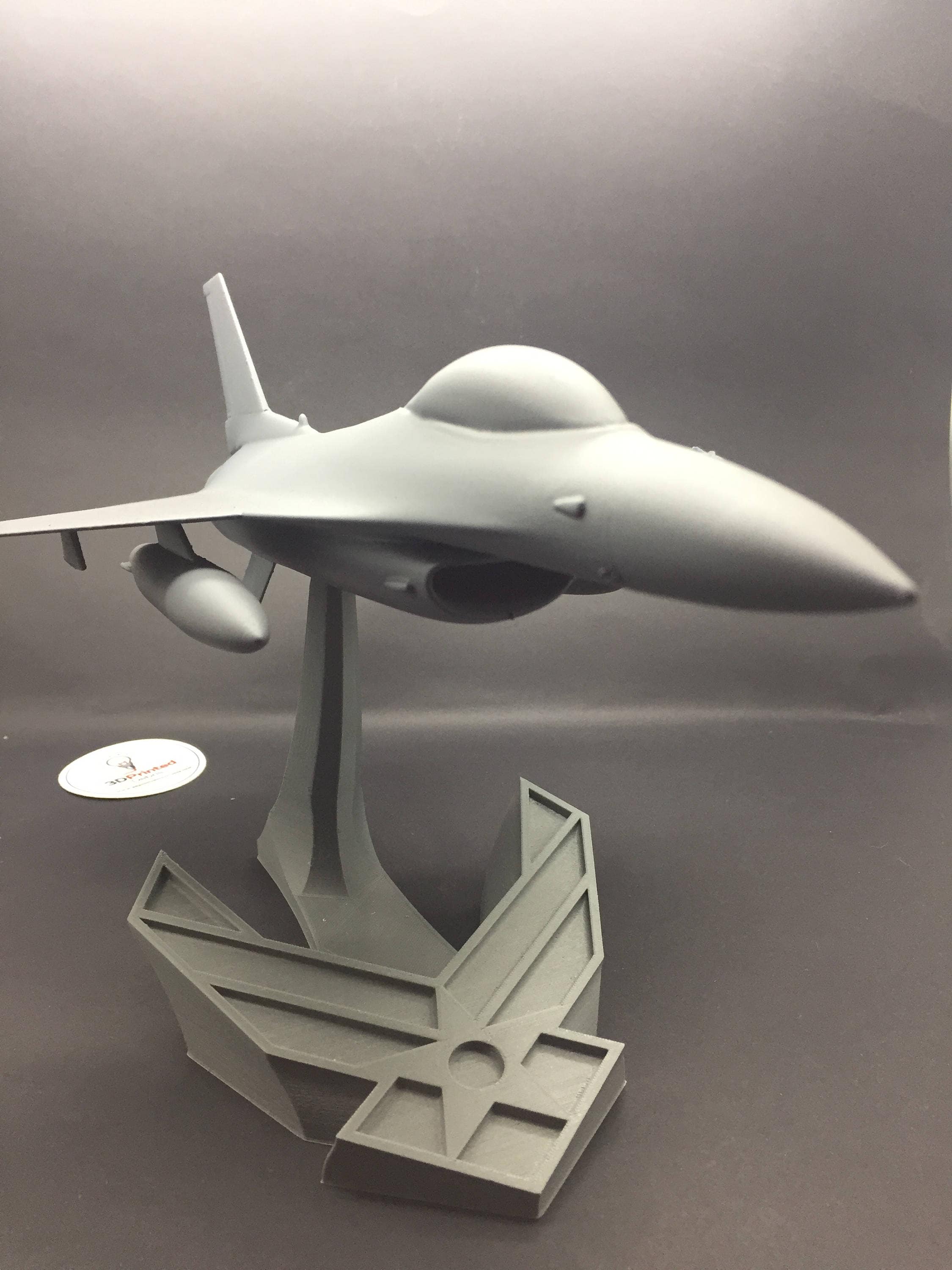 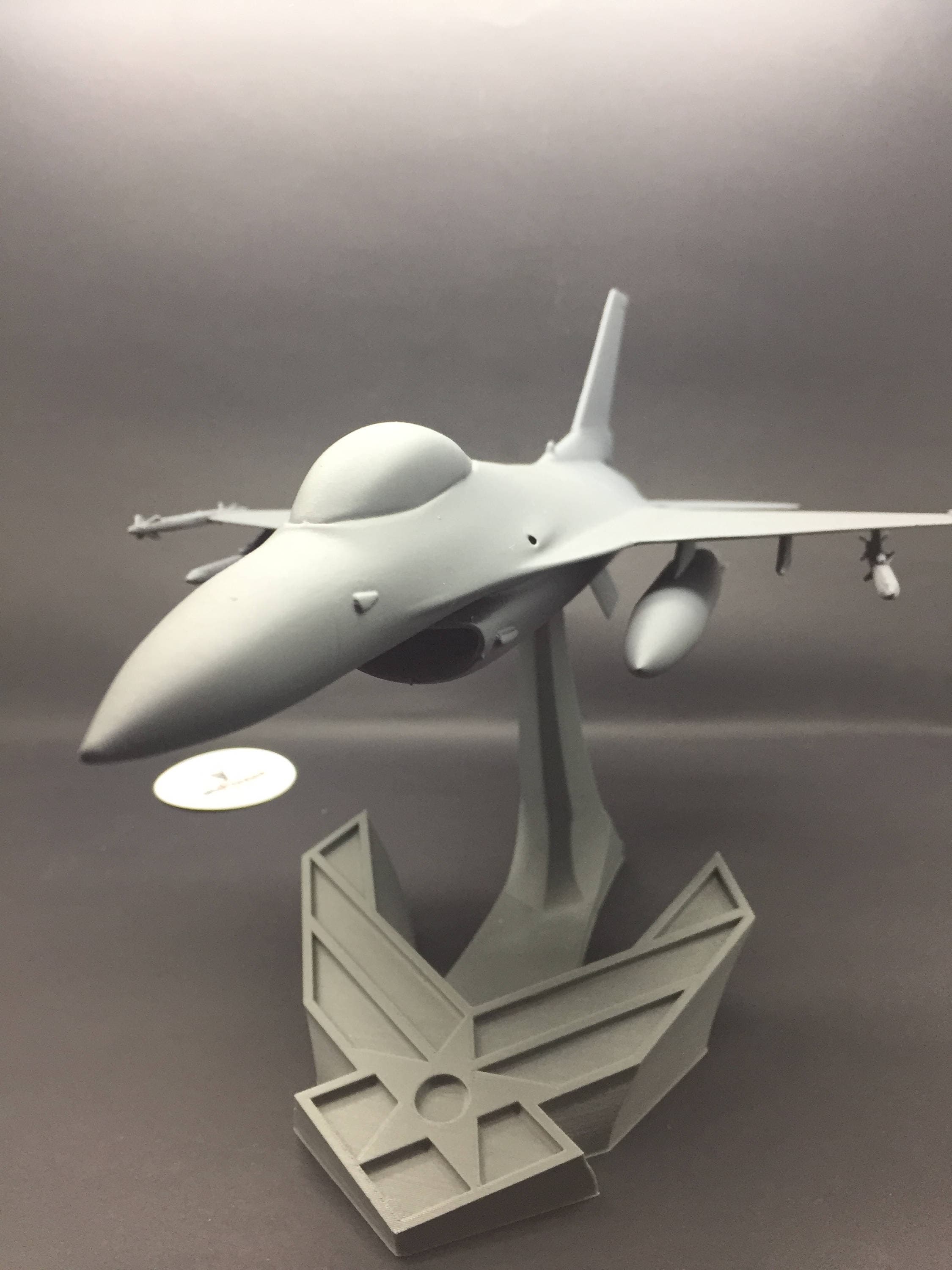 This is a model I designed with help from "Oranhunter" for display inspired by the F16 Fighting Falcon Fighter Aircraft.

It has a 9 inch wingspan and is 8 inches tall when sitting on it's stand. Nose to tail it comes in at a whopping 12.5 inches long!

The wings feature 4 missiles, 2 tanks, and 2 empty stations. The level of detail on this model is impressive as every nook and cranny are captured, down to the naca ducts and pitot static tubes.

The Fighting Falcon's key features include a frameless bubble canopy for better visibility, side-mounted control stick to ease control while maneuvering, a seat reclined 30 degrees to reduce the effect of g-forces on the pilot, and the first use of a relaxed static stability/fly-by-wire flight control system which helps to make it a nimble aircraft. The F-16 has an internal M61 Vulcan cannon and 11 locations for mounting weapons and other mission equipment. The F-16's official name is "Fighting Falcon", but "Viper" is commonly used by its pilots and crews, due to a perceived resemblance to a viper snake as well as the Colonial Viper starfighter on Battlestar Galactica.[7][8]

In addition to active duty for U.S. Air Force, Air Force Reserve Command, and Air National Guard units, the aircraft is also used by the USAF aerial demonstration team, the U.S. Air Force Thunderbirds, and as an adversary/aggressor aircraft by the United States Navy. The F-16 has also been procured to serve in the air forces of 25 other nations.[9] As of 2015, it is the world's second most numerous military aircraft and the most numerous airplane in service.[10]


The F16 is detachable from the stand to make for easier shipping and transport.

This is an excellent conversation piece for your desk or cabinet. It's also a perfect going-away present for someone moving on to another assignment, or just a really neat gift for a trash hauler fan. I can make custom placards or add text to the plaque to personalize the item; please use the "request custom order" button and I'll get to work!

This specific model is printed, hand fitted and assembled, then hand-sanded, painted, and then wet-sanded prior to the finish coat. These take me a while to make, so I'll need a couple of weeks to turn it out.

This is a 3D printed product, so there may be minor defects (rough edges, bumps, etc). As a result, every model will be a unique creation with a character all of it's own.

I have spent months building my own machines to exact specifications for accuracy and surface quality, and I scrutinize every model very closely. I use only the highest quality filament to ensure colors are vibrant and defects are kept to an absolute minimum for both your item and my machine.

Please note, this creation is a work of fan art and is in no way affiliated with General Dynamics.