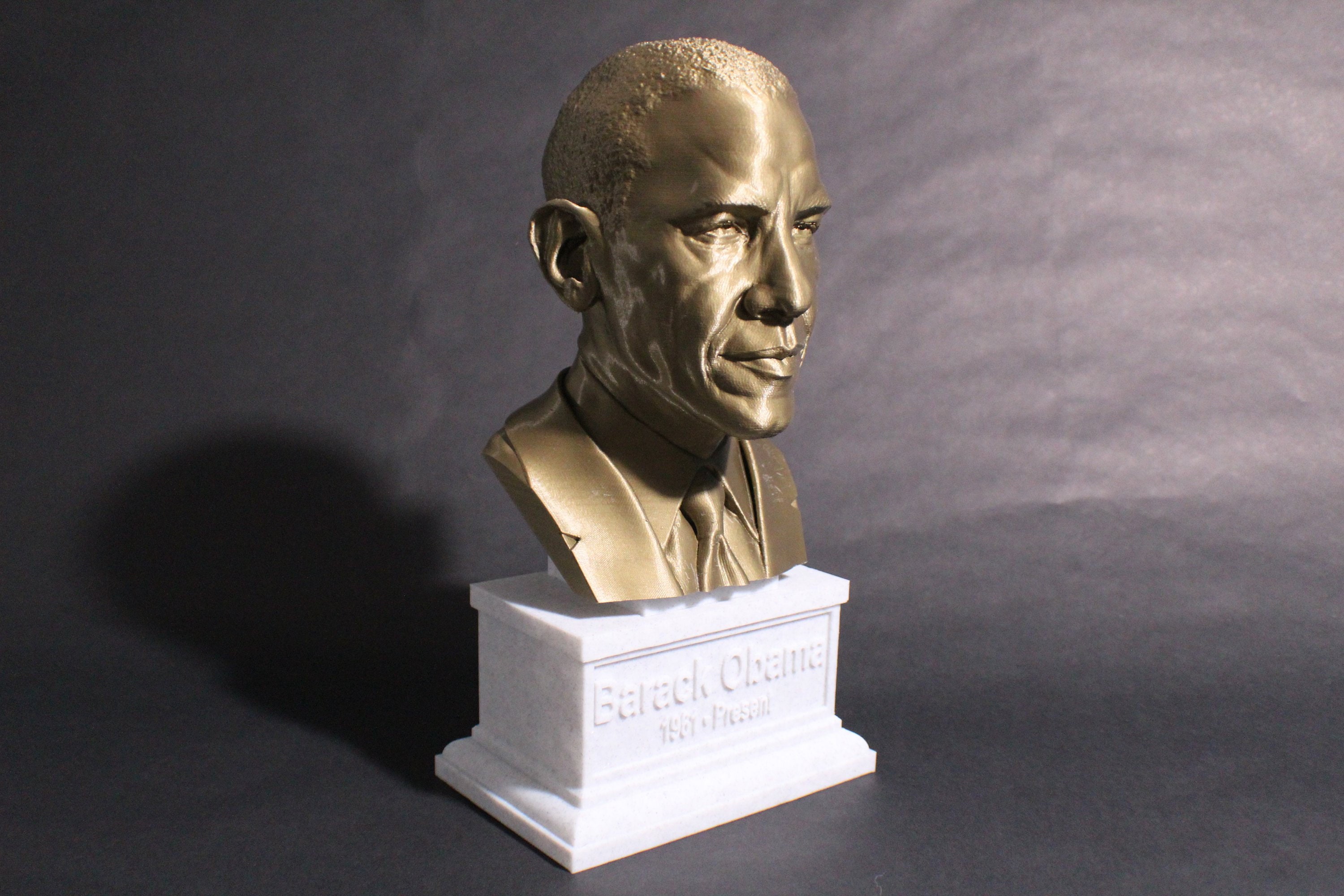 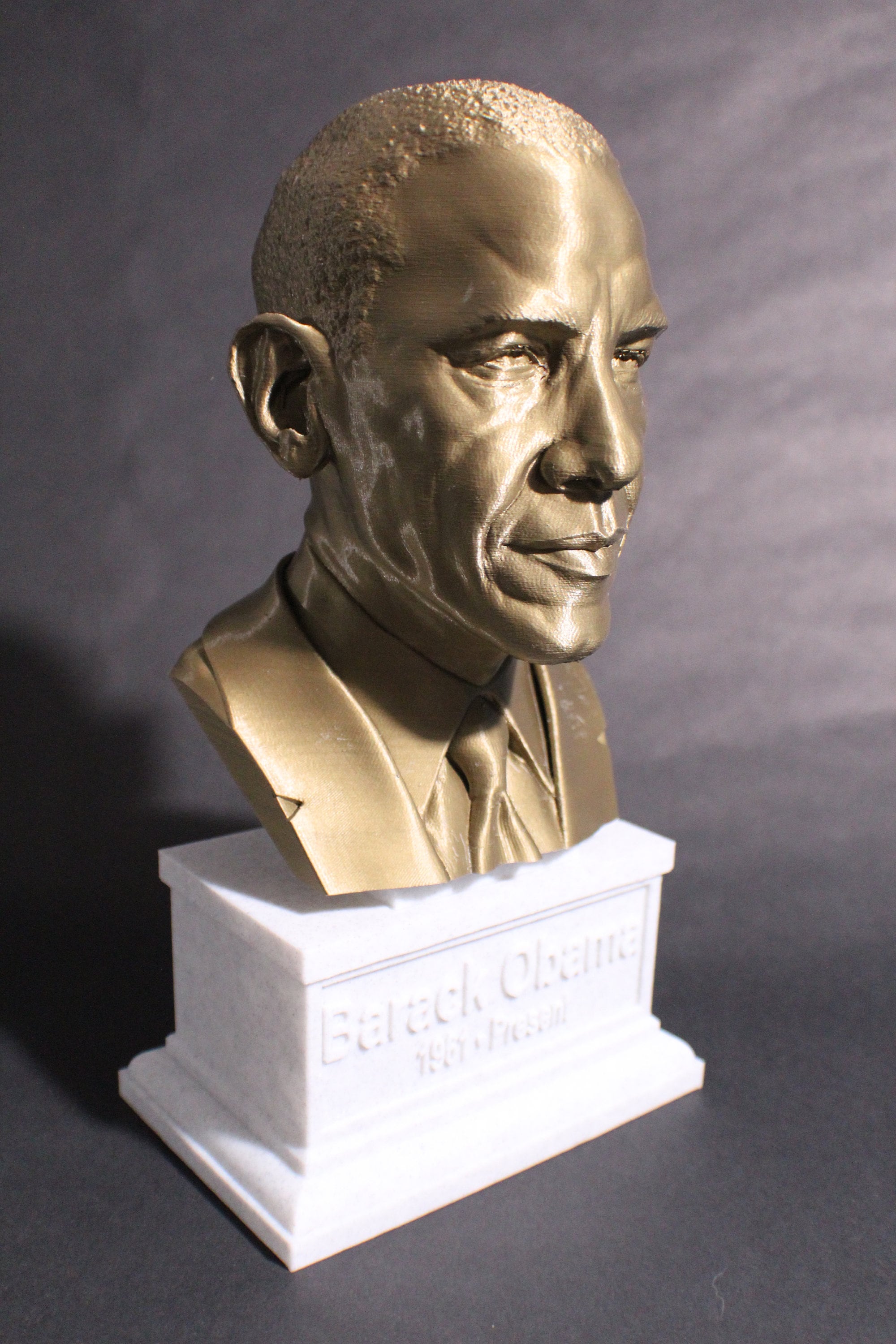 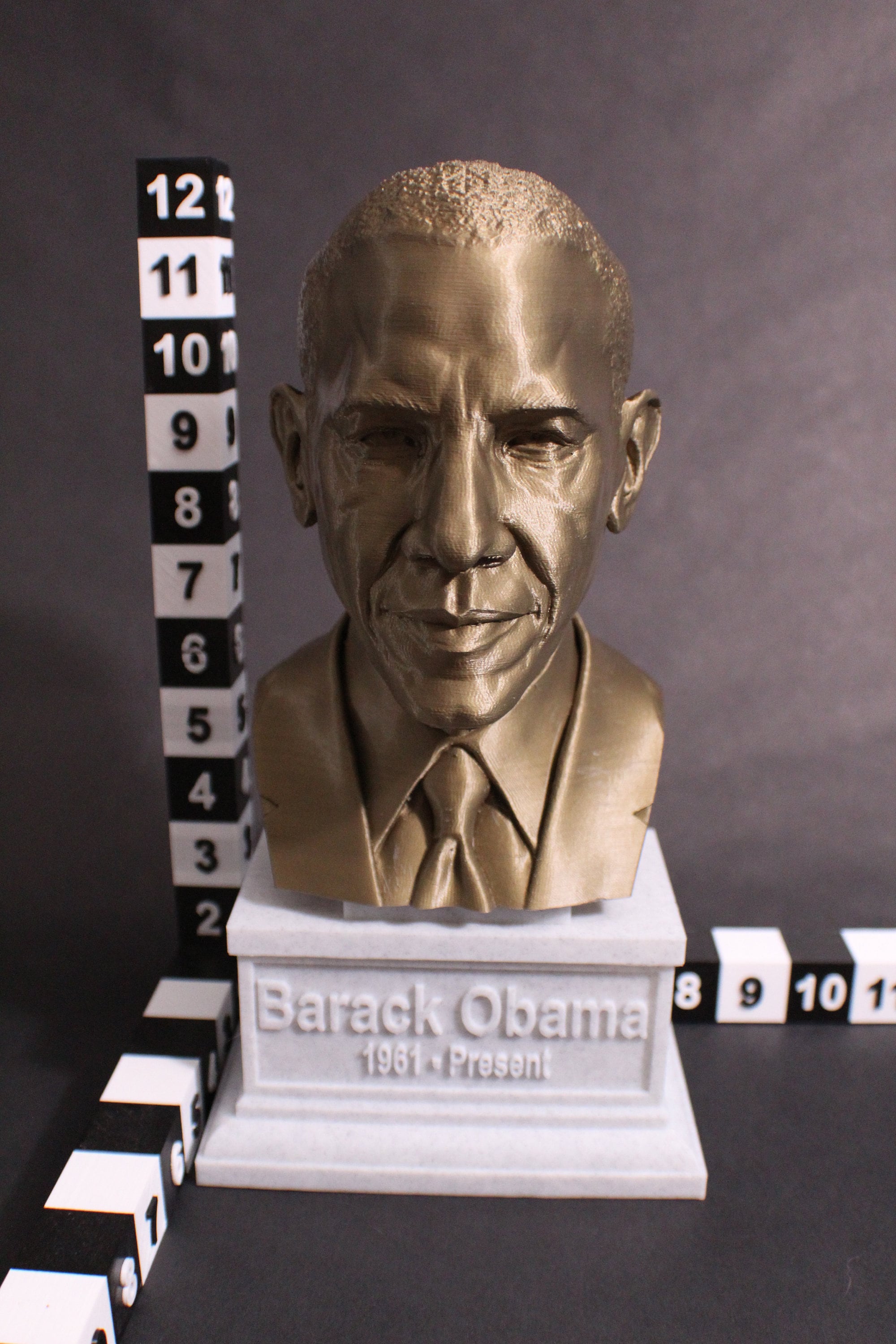 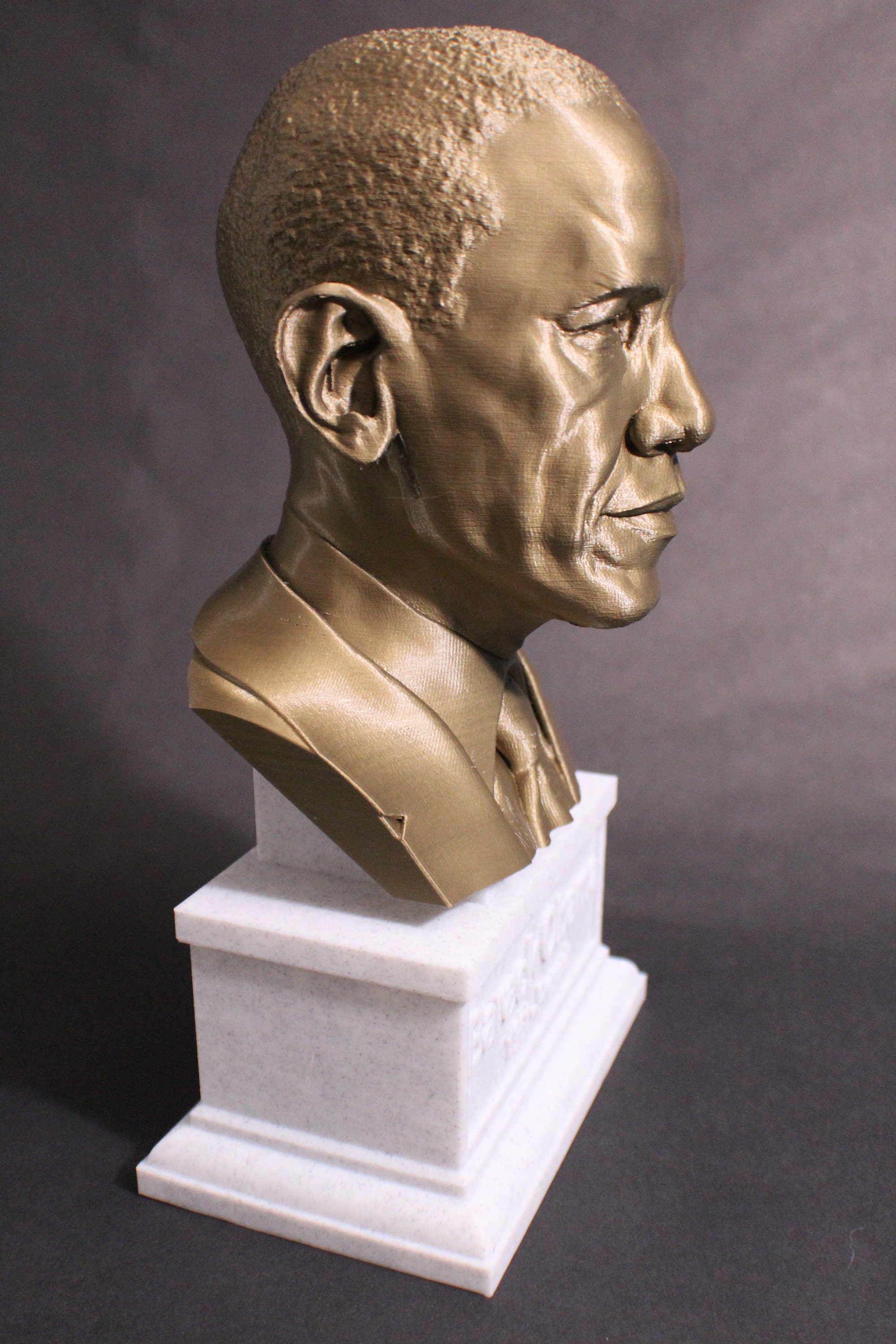 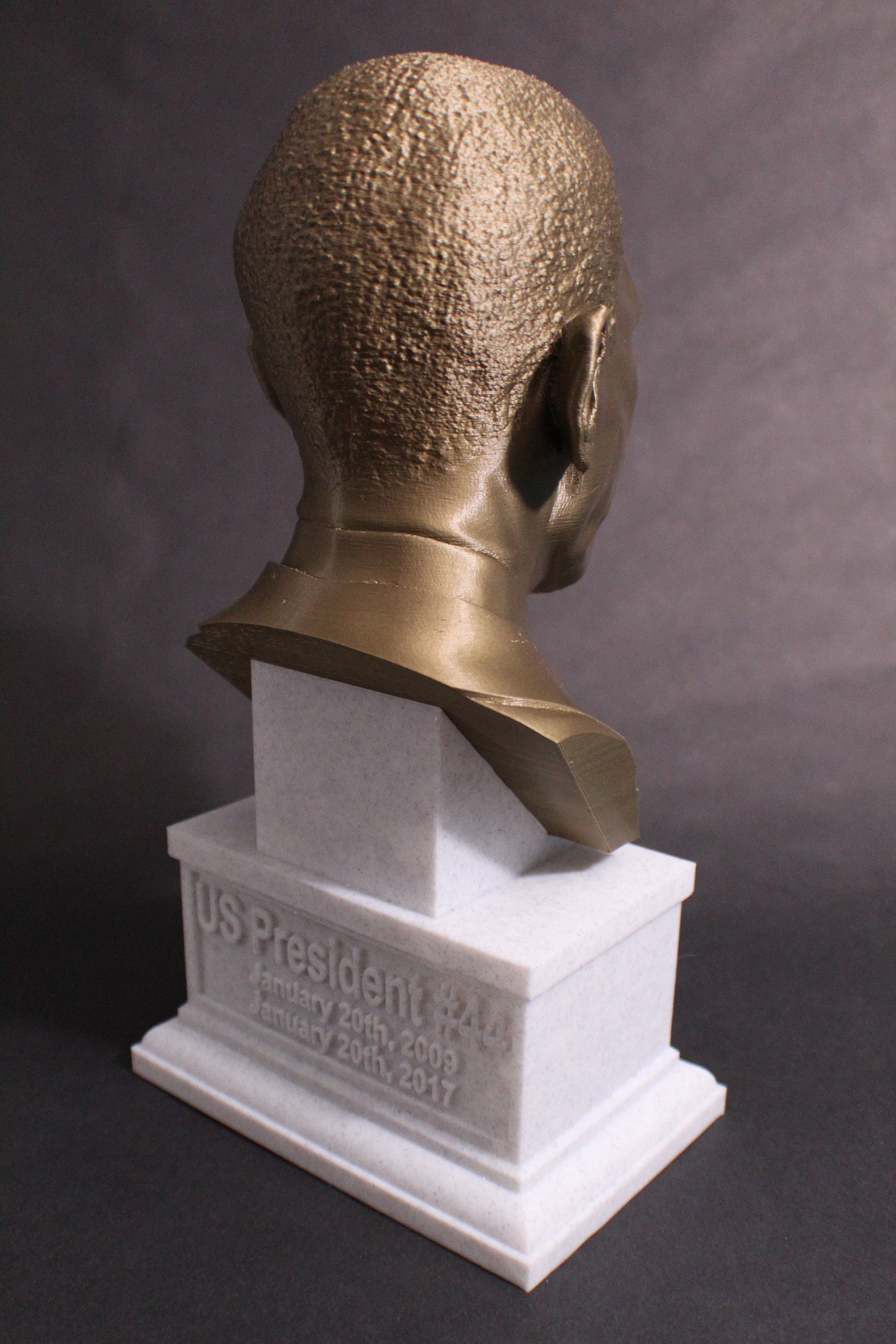 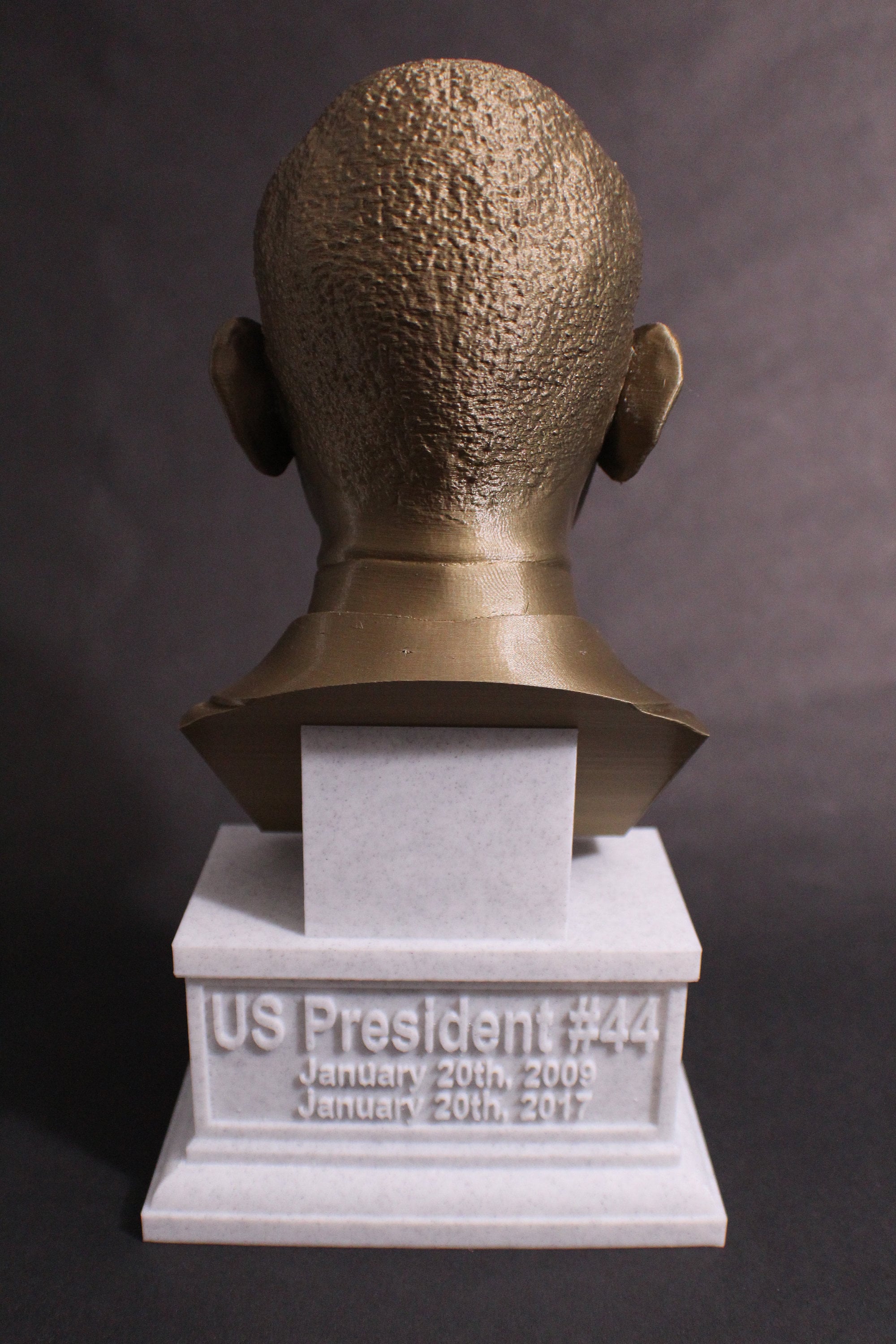 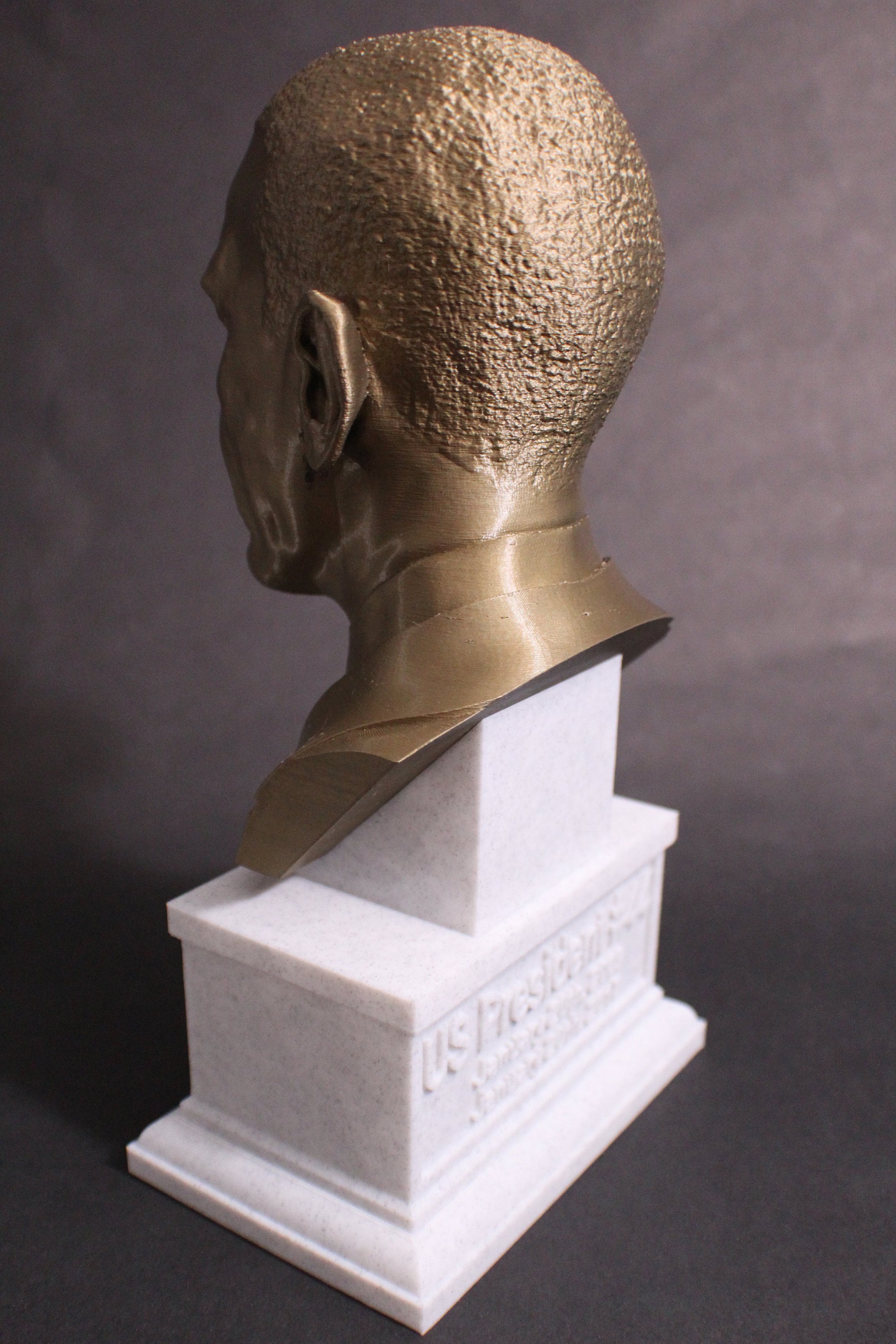 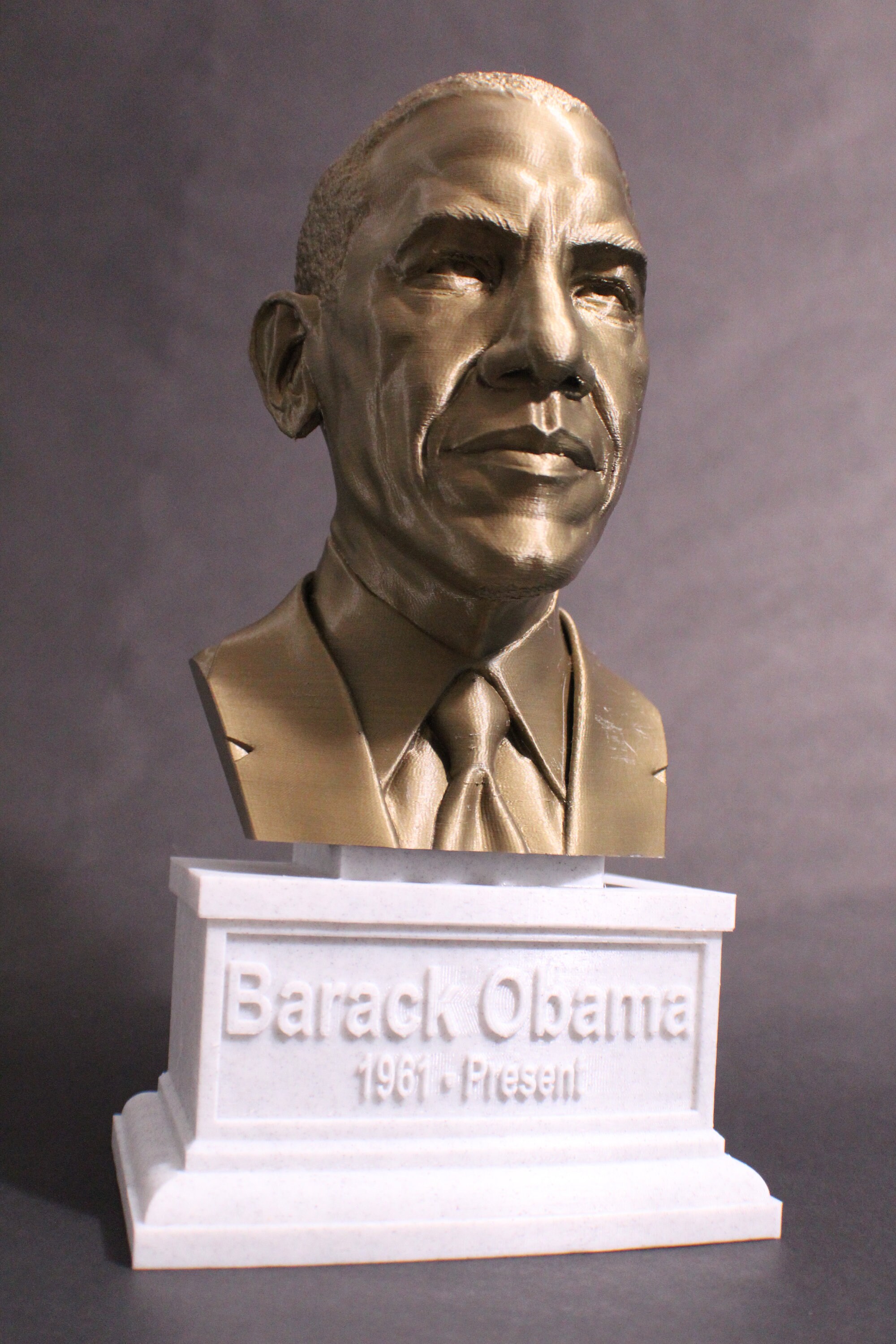 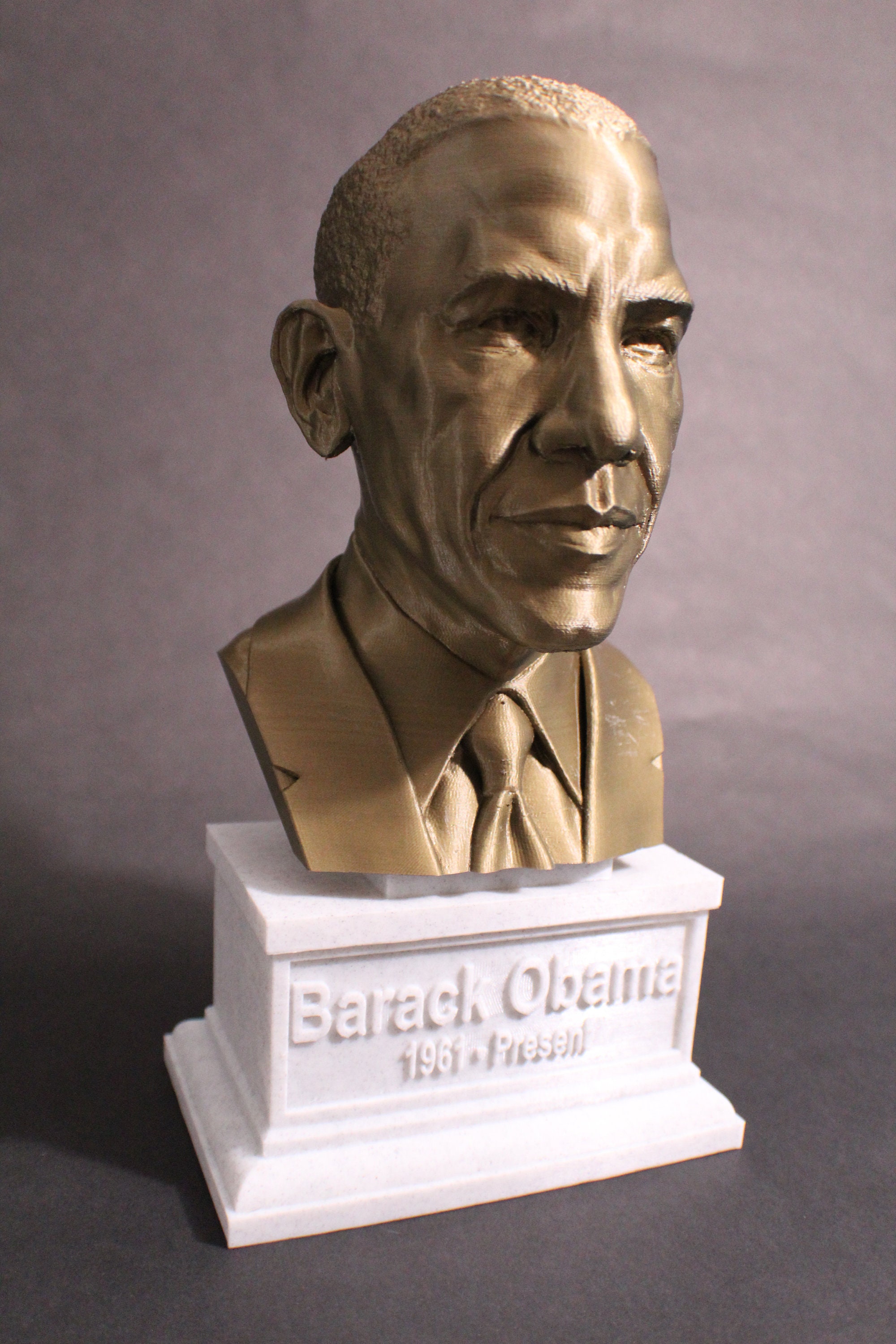 This 3D printed bust of Barack Obama, the forty-fourth United States President. This one is printed in a bronze and marble PLA, giving it a realistic metal/stone look and a surprise whenever someone picks it up to discover it's actual weight. It is more durable than alabaster or plaster, and is washable with lukewarm soapy water for easy spring cleaning. It comes on a custom plinth that has his lifetime on the front, and his dates in office as president on the back.

Obama was born in 1961 in Honolulu, Hawaii, two years after the territory was admitted to the Union as the 50th state. Raised largely in Hawaii, he also lived for a year of his childhood in the State of Washington and four years in Indonesia. After graduating from Columbia University in 1983, he worked as a community organizer in Chicago. In 1988, he enrolled in Harvard Law School, where he was the first black president of the Harvard Law Review. After graduating, he became a civil rights attorney and a professor, teaching constitutional law at the University of Chicago Law School from 1992 to 2004. He represented the 13th district for three terms in the Illinois Senate from 1997 to 2004, when he ran for the U.S. Senate. He received national attention in 2004 with his March primary win, his well-received July Democratic National Convention keynote address, and his landslide November election to the Senate. In 2008, he was nominated for president a year after his campaign began and after a close primary campaign against Hillary Clinton. He was elected over Republican John McCain and was inaugurated on January 20, 2009. Nine months later, he was named the 2009 Nobel Peace Prize laureate.

During his first two years in office, Obama signed many landmark bills into law. The main reforms were the Patient Protection and Affordable Care Act (often referred to as "Obamacare", shortened as the "Affordable Care Act"), the Dodd–Frank Wall Street Reform and Consumer Protection Act, and the Don't Ask, Don't Tell Repeal Act of 2010. The American Recovery and Reinvestment Act of 2009 and Tax Relief, Unemployment Insurance Reauthorization, and Job Creation Act of 2010 served as economic stimulus amidst the Great Recession. After a lengthy debate over the national debt limit, he signed the Budget Control and the American Taxpayer Relief Acts. In foreign policy, he increased U.S. troop levels in Afghanistan, reduced nuclear weapons with the United States–Russia New START treaty, and ended military involvement in the Iraq War. He ordered military involvement in Libya in opposition to Muammar Gaddafi; Gaddafi was killed by NATO-assisted forces. He also ordered the military operations that resulted in the deaths of Osama bin Laden and suspected Yemeni Al-Qaeda operative Anwar al-Awlaki.

The flesh tone was real, but I hate that I wasn't able to see a picture of the flesh tone. Yes, it shipped on time. The shop was professional.