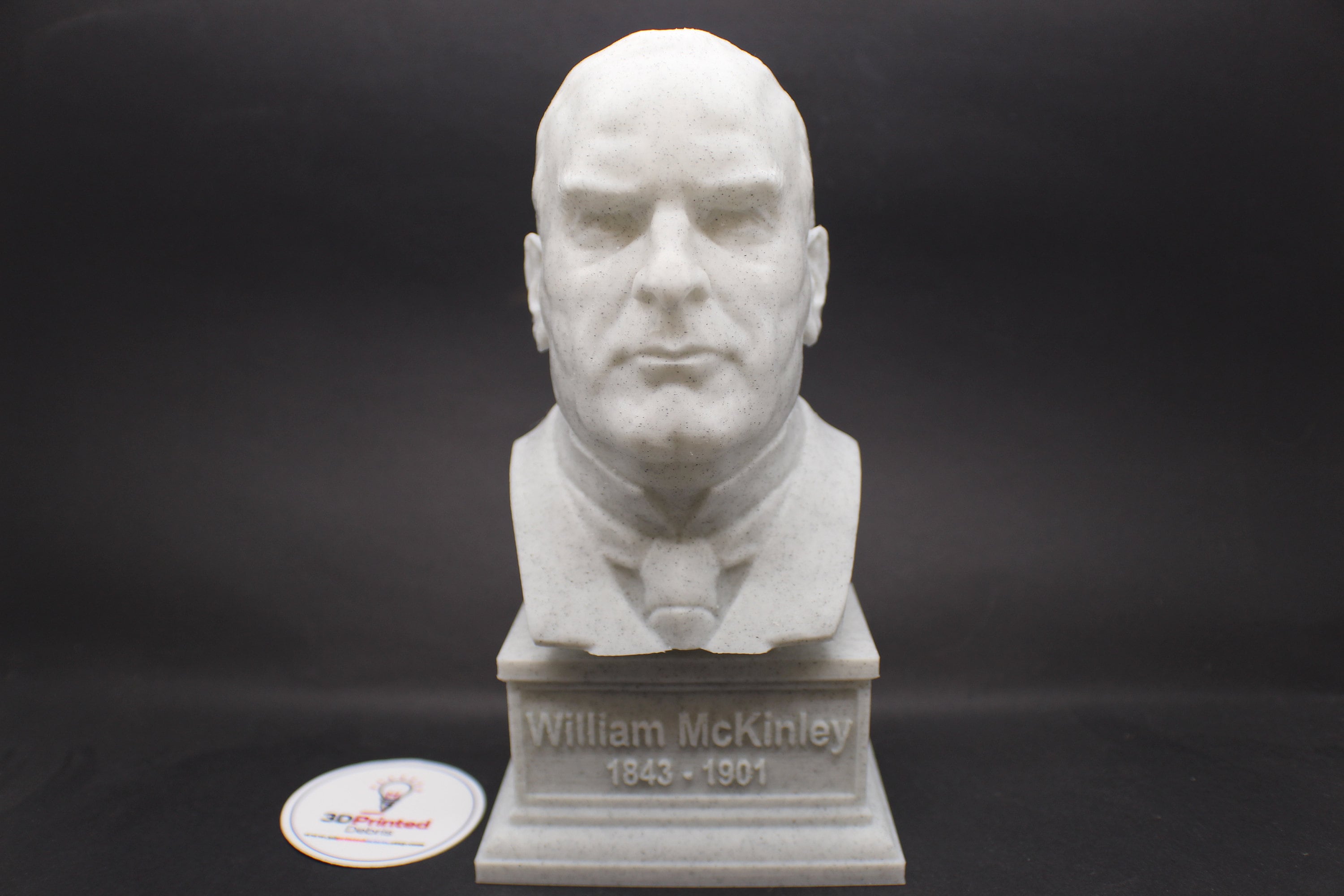 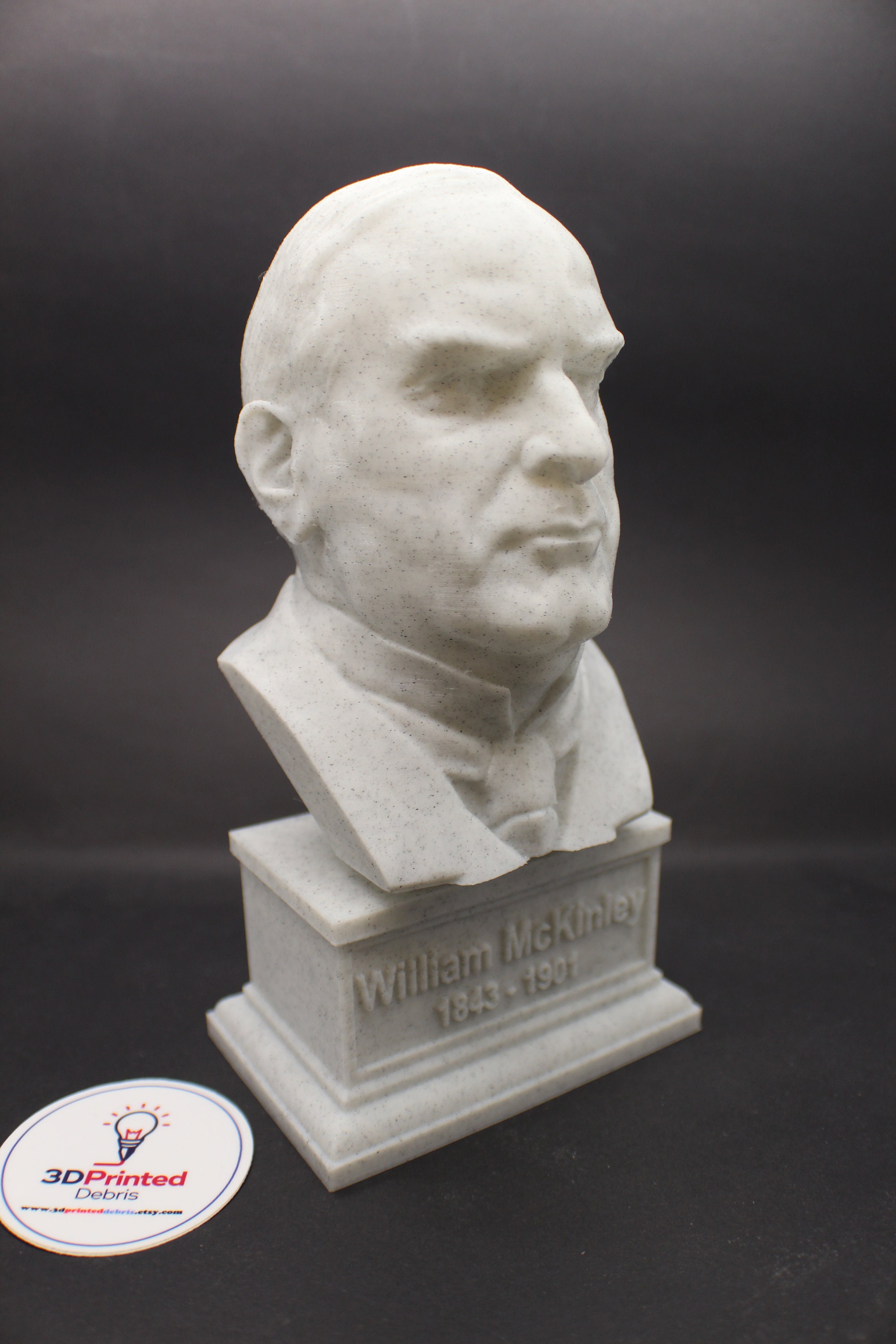 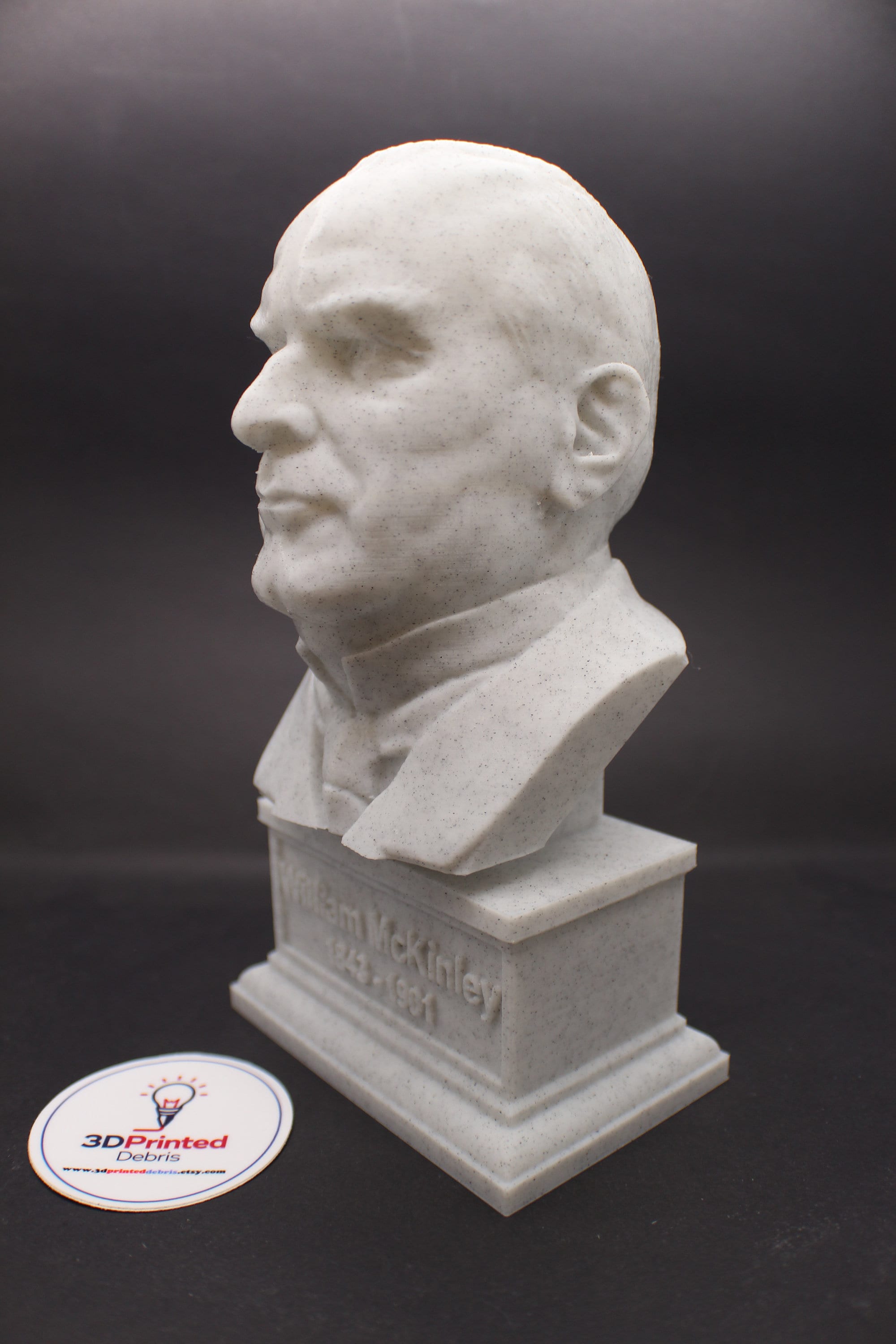 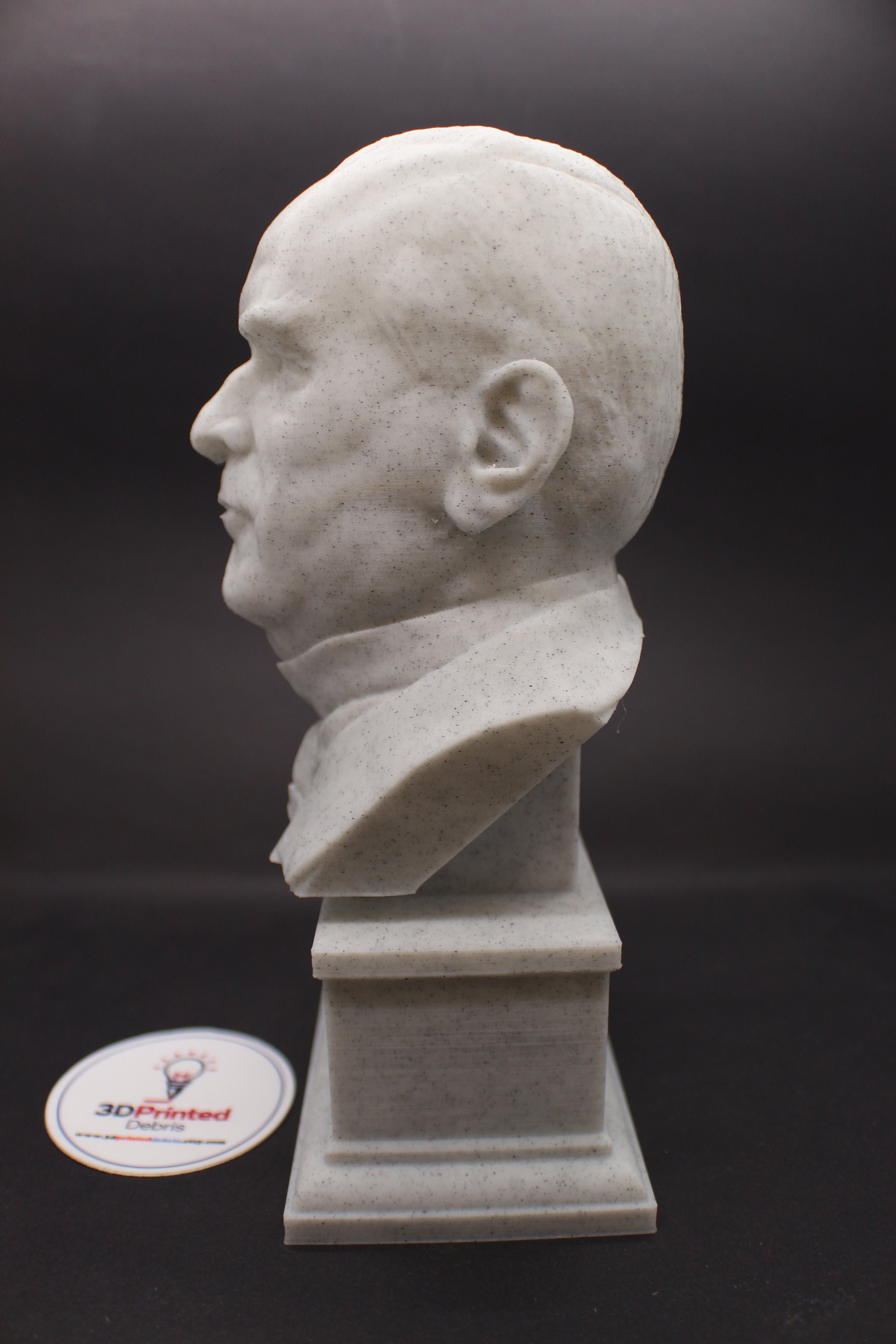 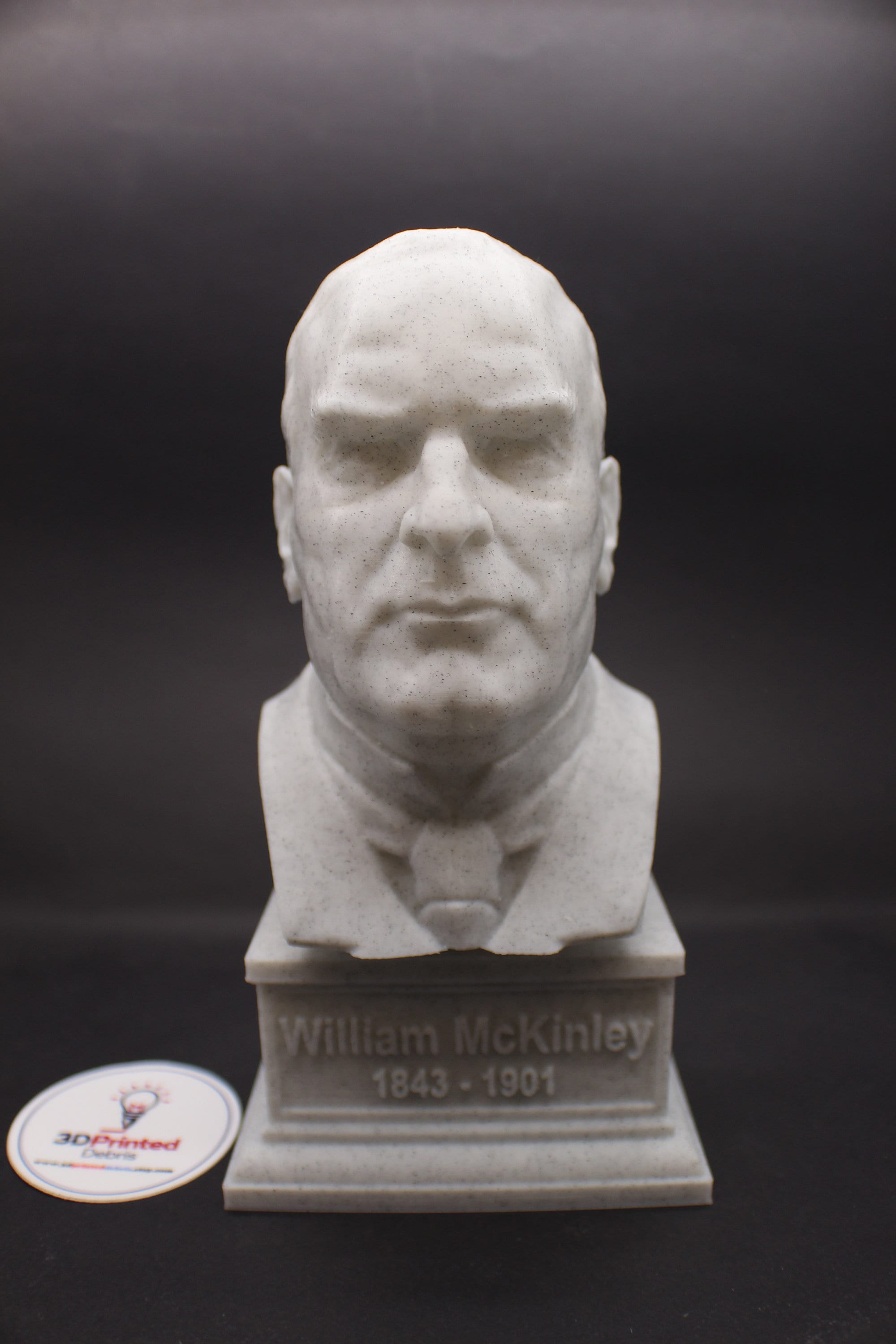 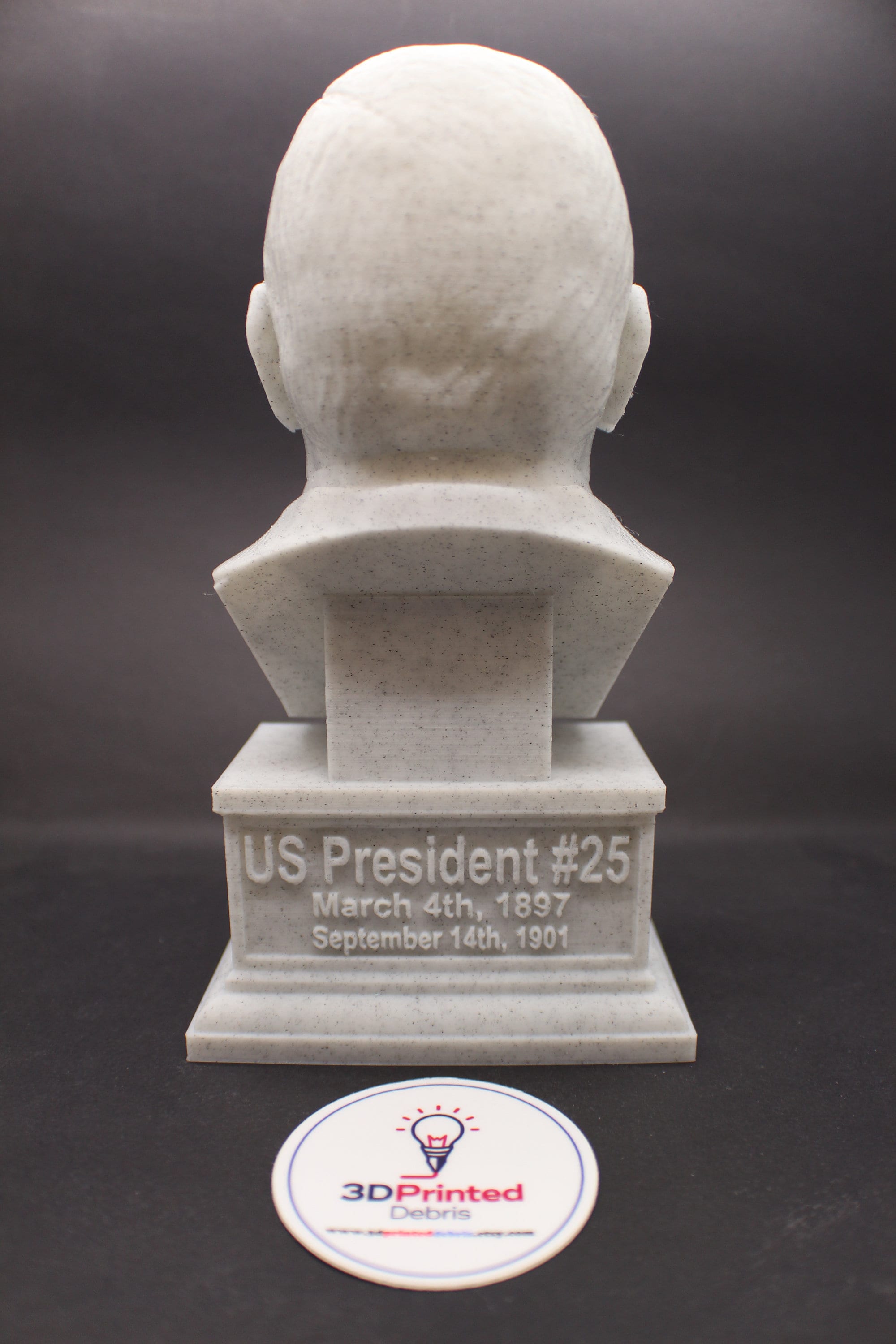 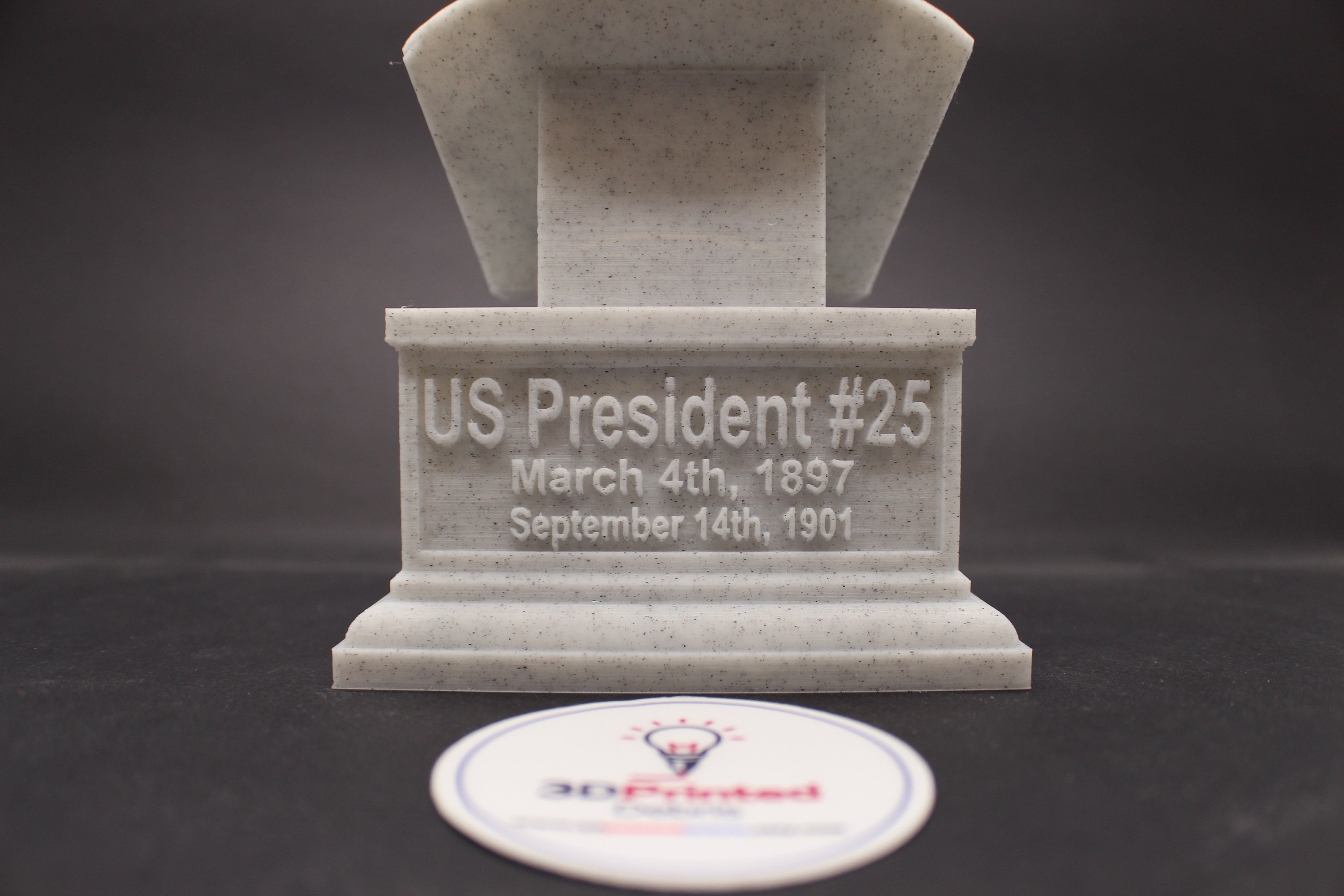 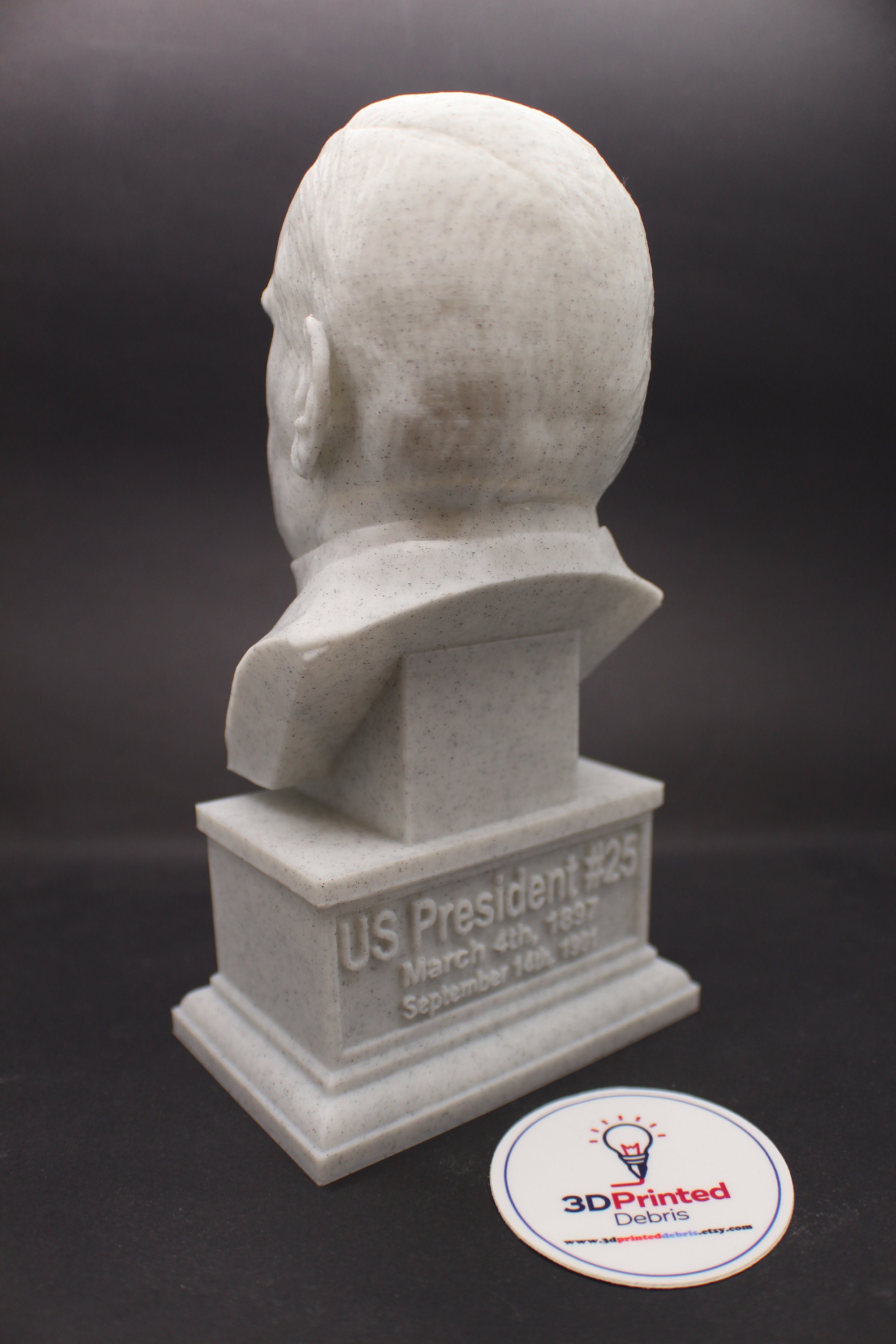 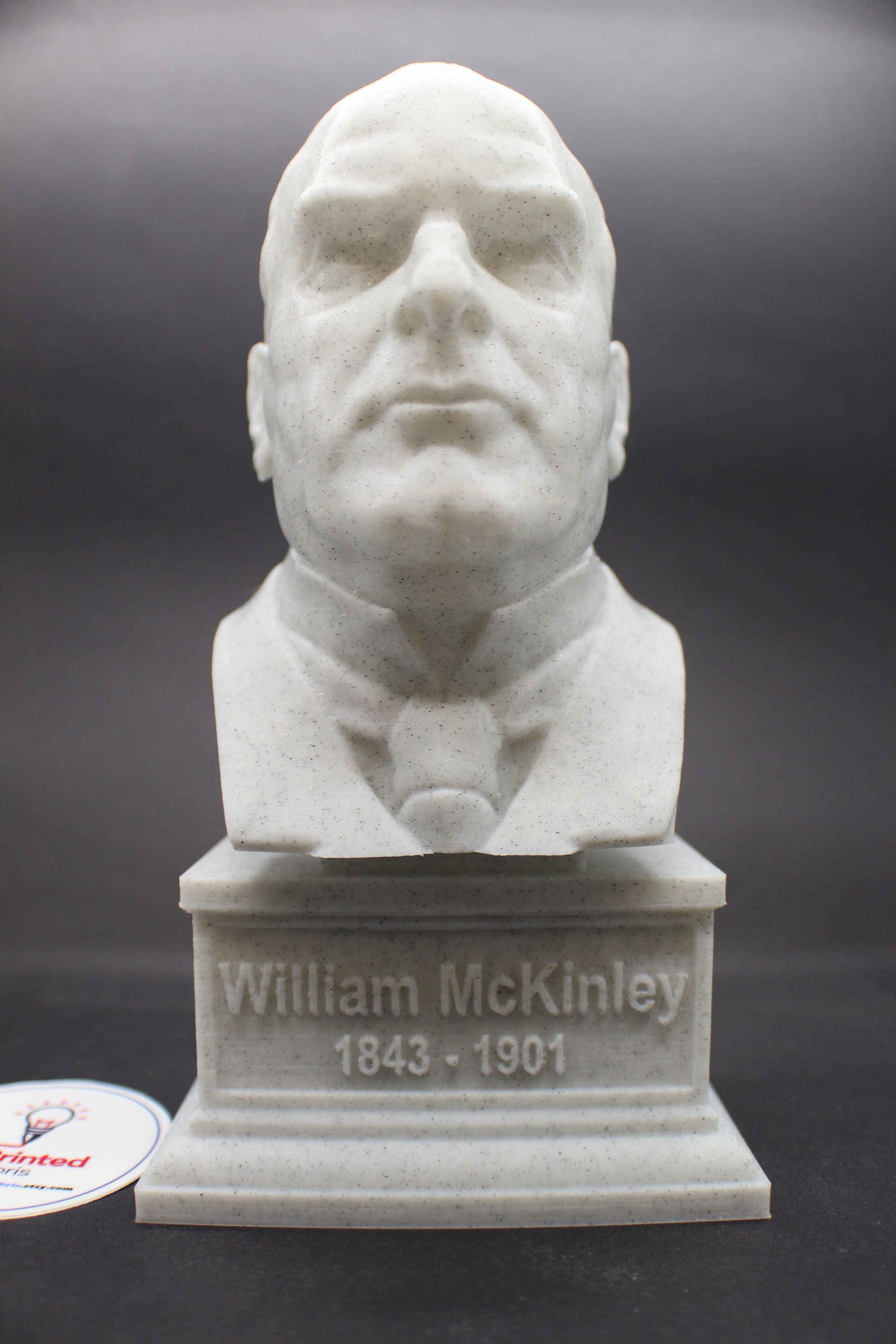 This 3D printed bust of William McKinley, the twenty-fifth United States President. This one is printed in a marble PLA, giving it a realistic stone look and a surprise whenever someone picks it up to discover it's actual weight. It is more durable than alabaster or plaster, and is washable with lukewarm soapy water for easy spring cleaning. It comes on a custom plinth that has his lifetime on the front, and his dates in office as president on the back.

William McKinley (January 29, 1843 – September 14, 1901) was the 25th President of the United States, serving from March 4, 1897, until his assassination six months into his second term. McKinley led the nation to victory in the Spanish–American War, raised protective tariffs to promote American industry and kept the nation on the gold standard in a rejection of free silver (effectively, expansionary monetary policy).

McKinley was the last president to have served in the American Civil War and the only one to have started the war as an enlisted soldier, beginning as a private in the Union Army and ending as a brevet major. After the war, he settled in Canton, Ohio, where he practiced law and married Ida Saxton. In 1876, he was elected to Congress, where he became the Republican Party's expert on the protective tariff, which he promised would bring prosperity. His 1890 McKinley Tariff was highly controversial, which together with a Democratic redistricting aimed at gerrymandering him out of office led to his defeat in the Democratic landslide of 1890. He was elected Governor of Ohio in 1891 and 1893, steering a moderate course between capital and labor interests. With the aid of his close adviser Mark Hanna, he secured the Republican nomination for president in 1896 amid a deep economic depression. He defeated his Democratic rival William Jennings Bryan after a front porch campaign in which he advocated "sound money" (the gold standard unless altered by international agreement) and promised that high tariffs would restore prosperity.

Rapid economic growth marked McKinley's presidency. He promoted the 1897 Dingley Tariff to protect manufacturers and factory workers from foreign competition and in 1900 secured the passage of the Gold Standard Act. McKinley hoped to persuade Spain to grant independence to rebellious Cuba without conflict, but when negotiation failed he led the nation into the Spanish–American War of 1898—the United States victory was quick and decisive. As part of the peace settlement, Spain turned over to the United States its main overseas colonies of Puerto Rico, Guam and the Philippines while Cuba was promised independence, but at that time remained under the control of the United States Army. The United States annexed the independent Republic of Hawaii in 1898 and it became a United States territory.

Historians regard McKinley's 1896 victory as a realigning election in which the political stalemate of the post-Civil War era gave way to the Republican-dominated Fourth Party System, which began with the Progressive Era. McKinley defeated Bryan again in the 1900 presidential election in a campaign focused on imperialism, protectionism and free silver. His legacy was suddenly cut short when he was shot on September 6, 1901 by Leon Czolgosz, a second-generation Polish-American with anarchist leanings. McKinley died eight days later and was succeeded by his Vice President Theodore Roosevelt. As an innovator of American interventionism and pro-business sentiment, McKinley's presidency is generally considered above average, though his highly positive public perception was soon overshadowed by Roosevelt.