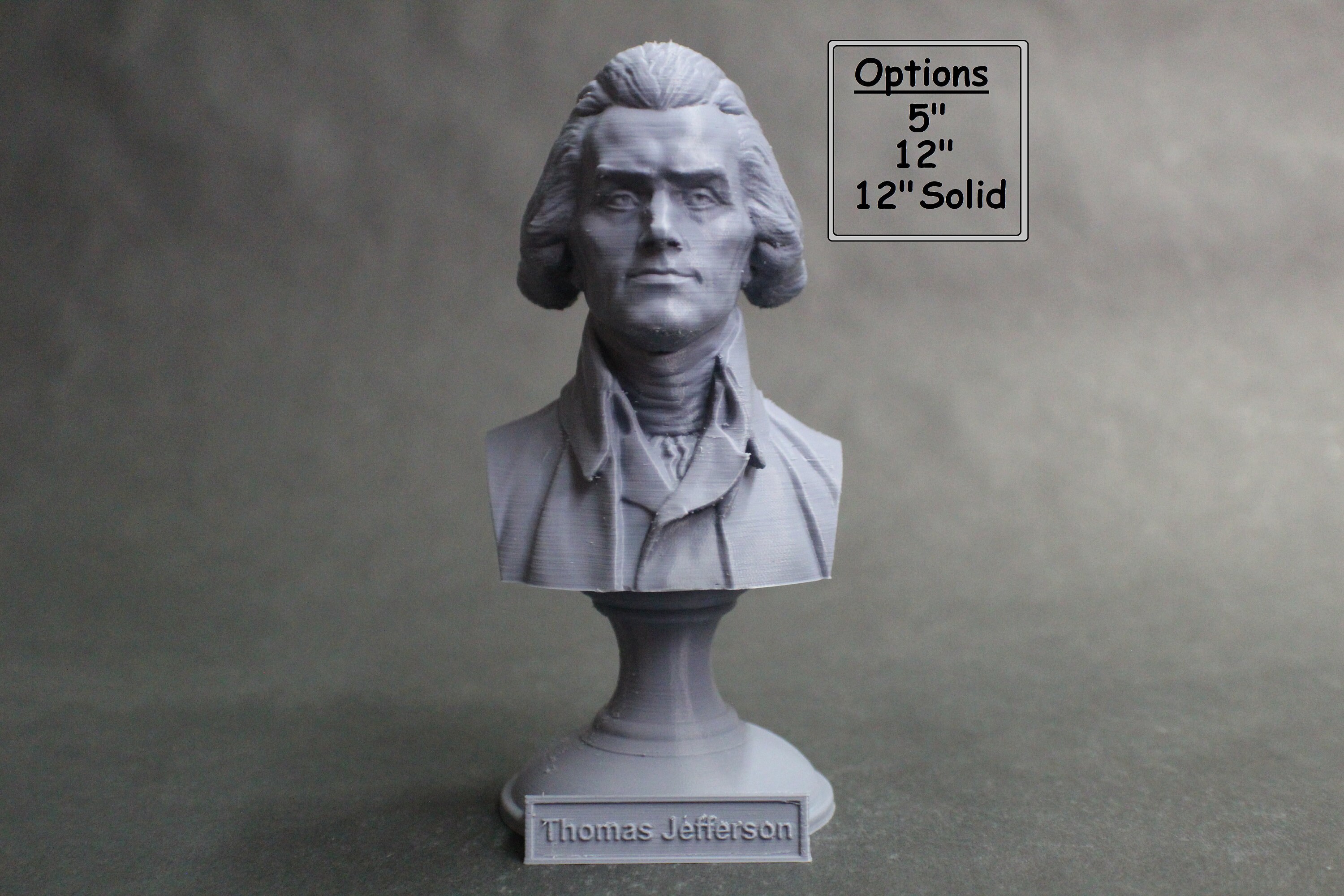 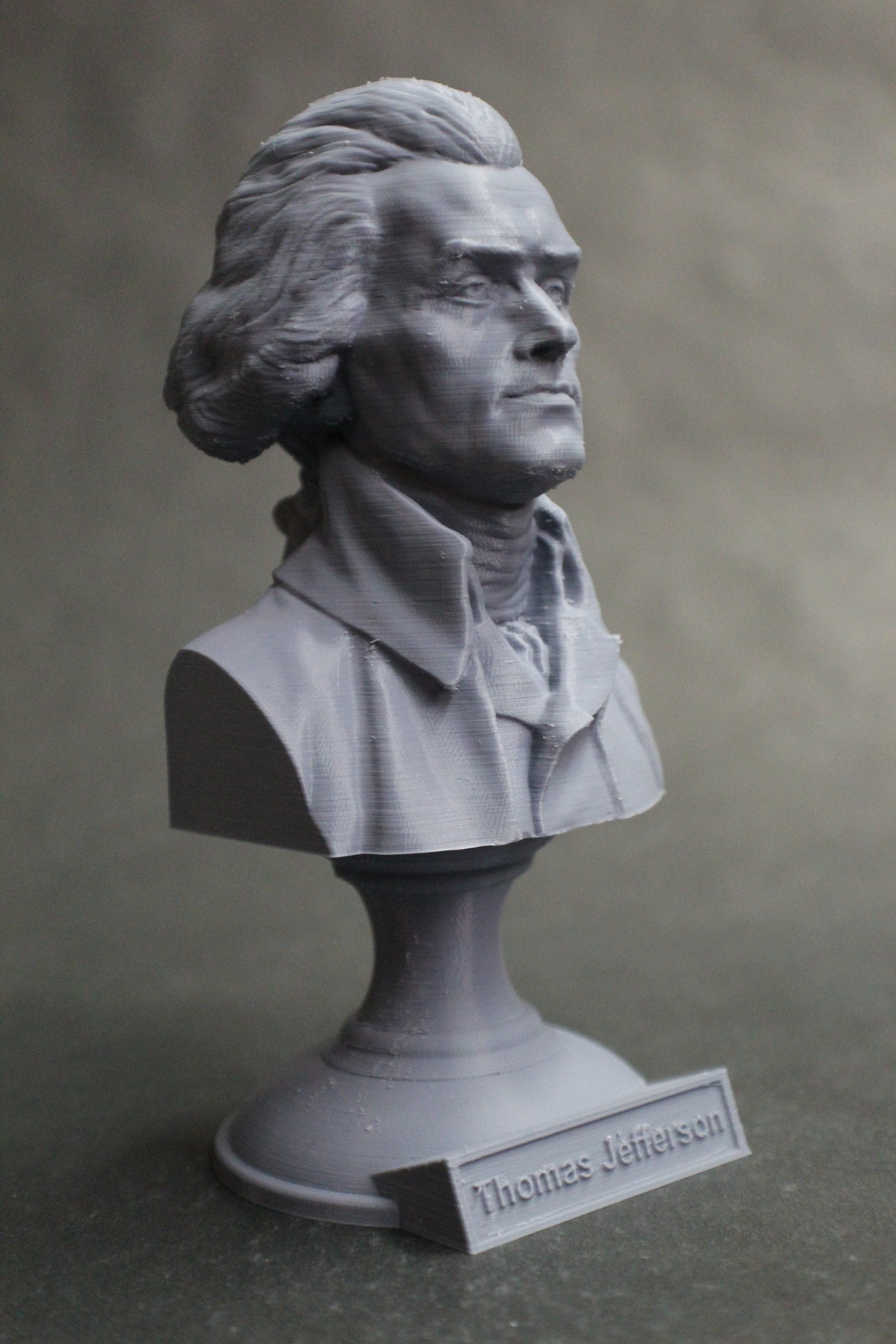 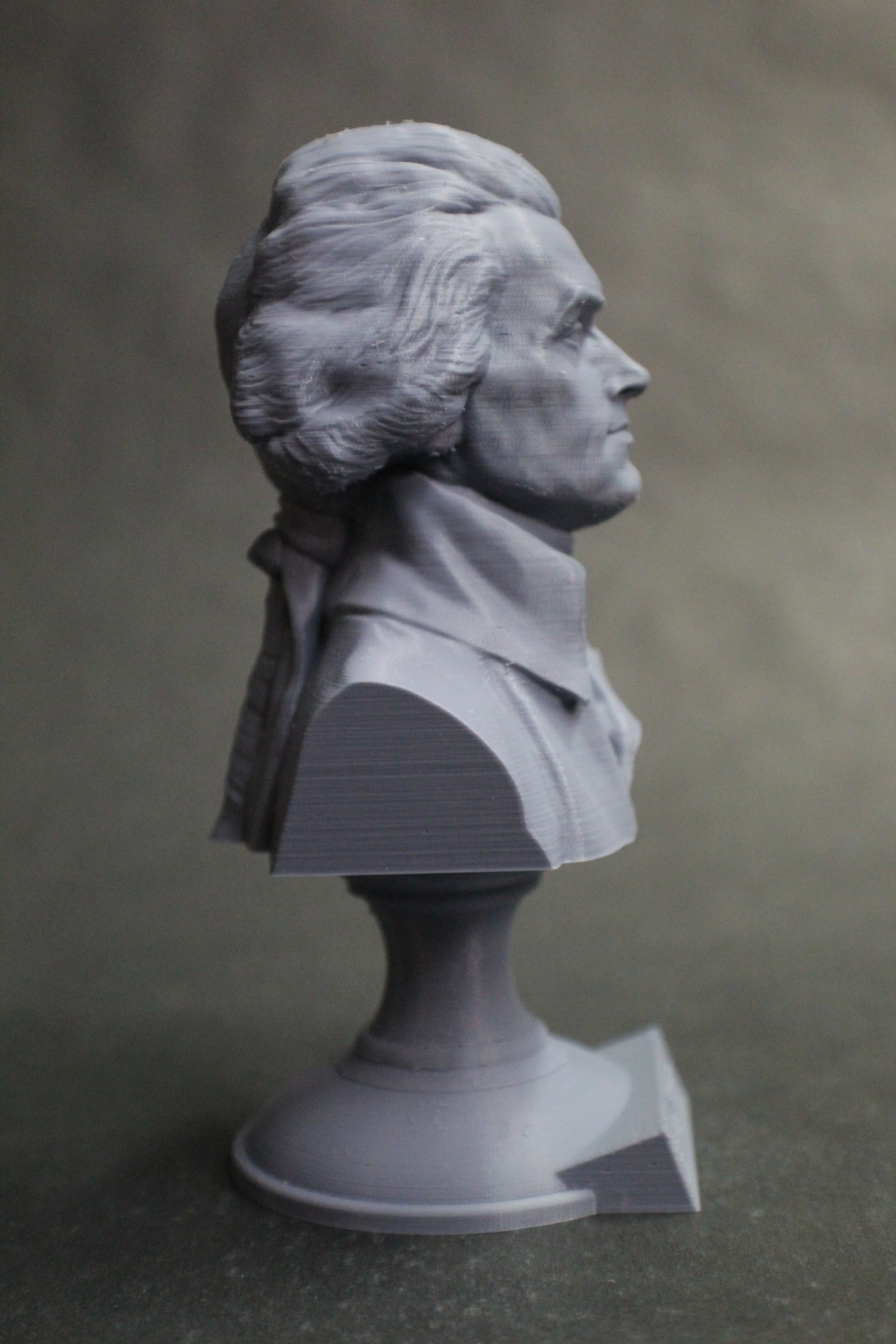 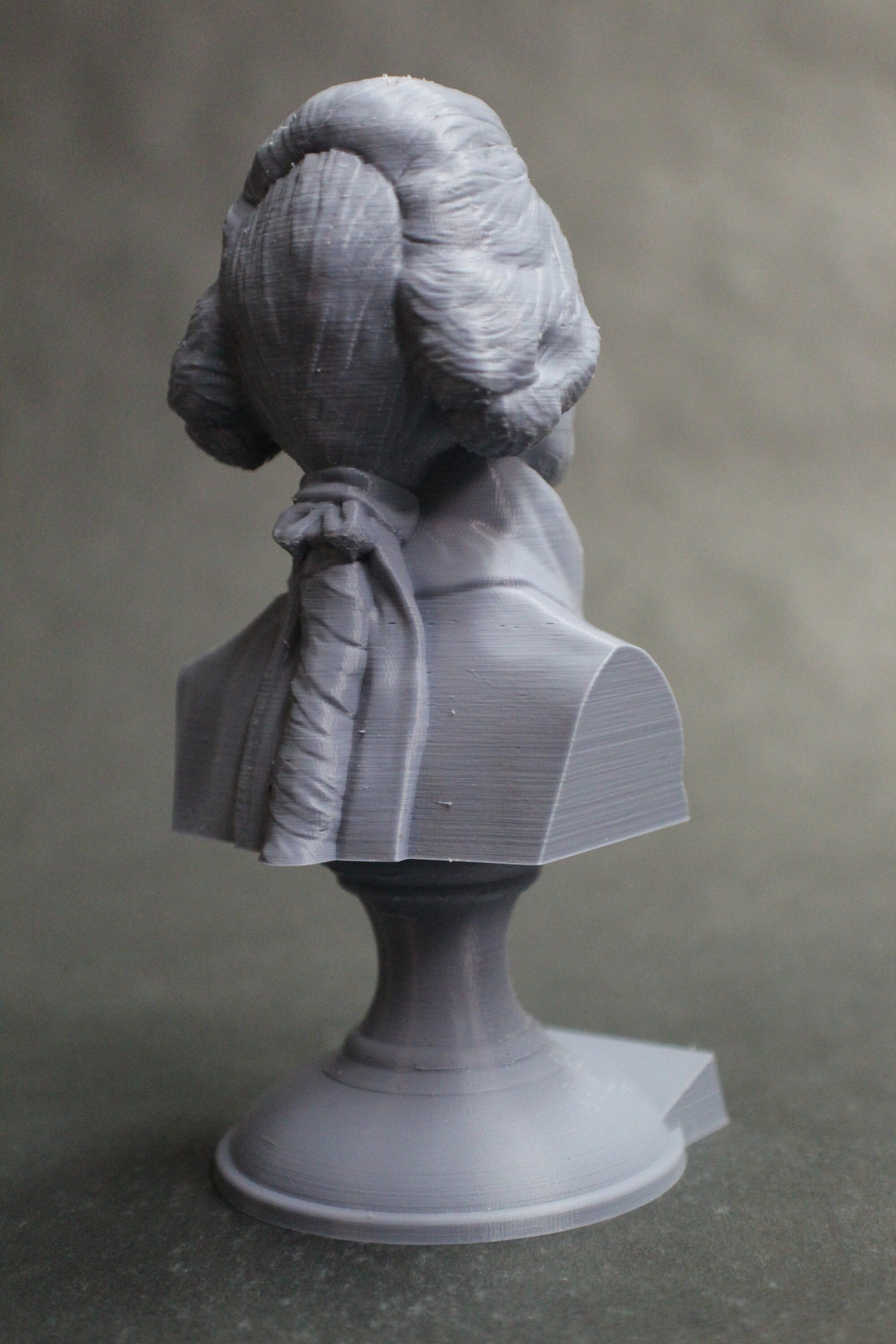 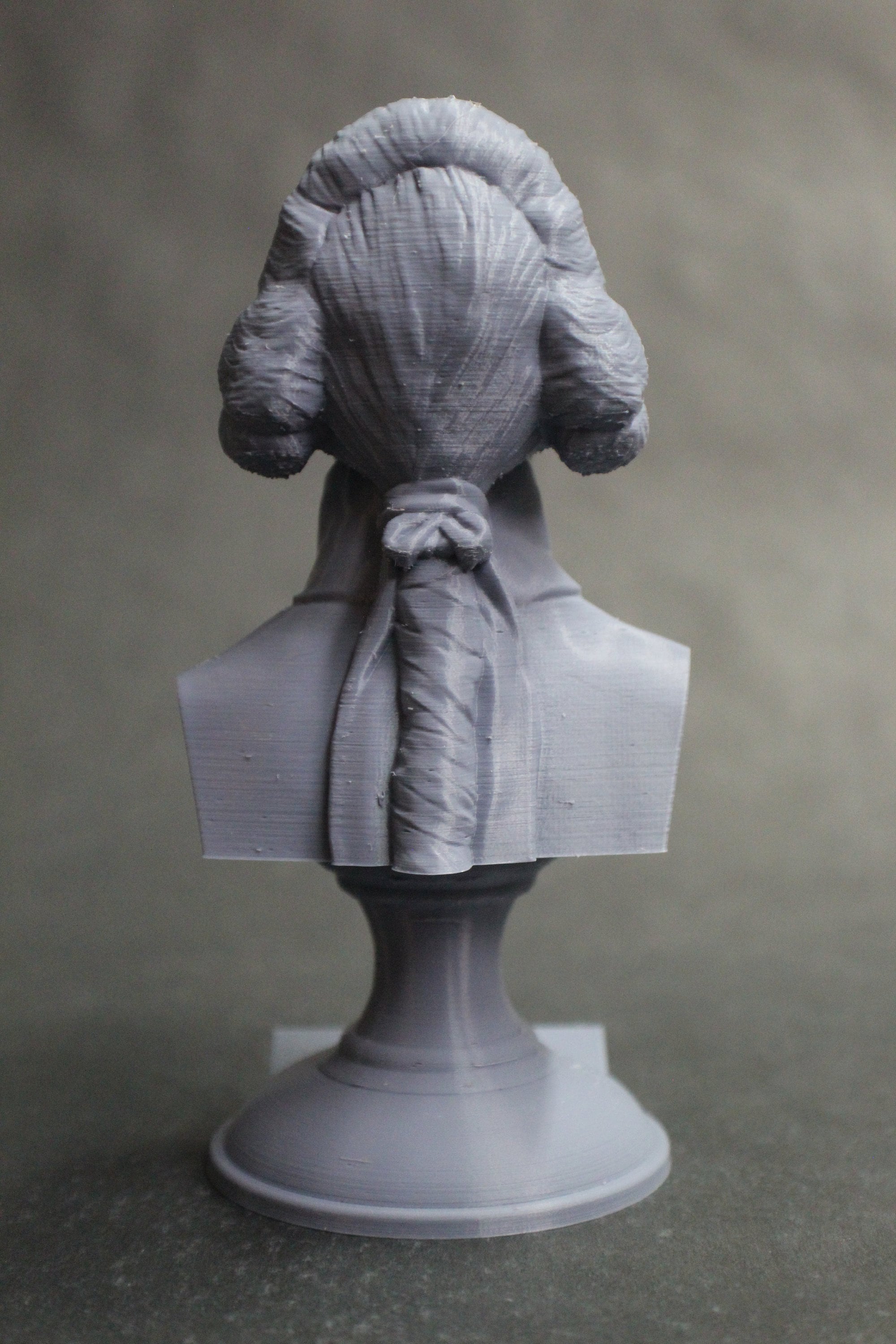 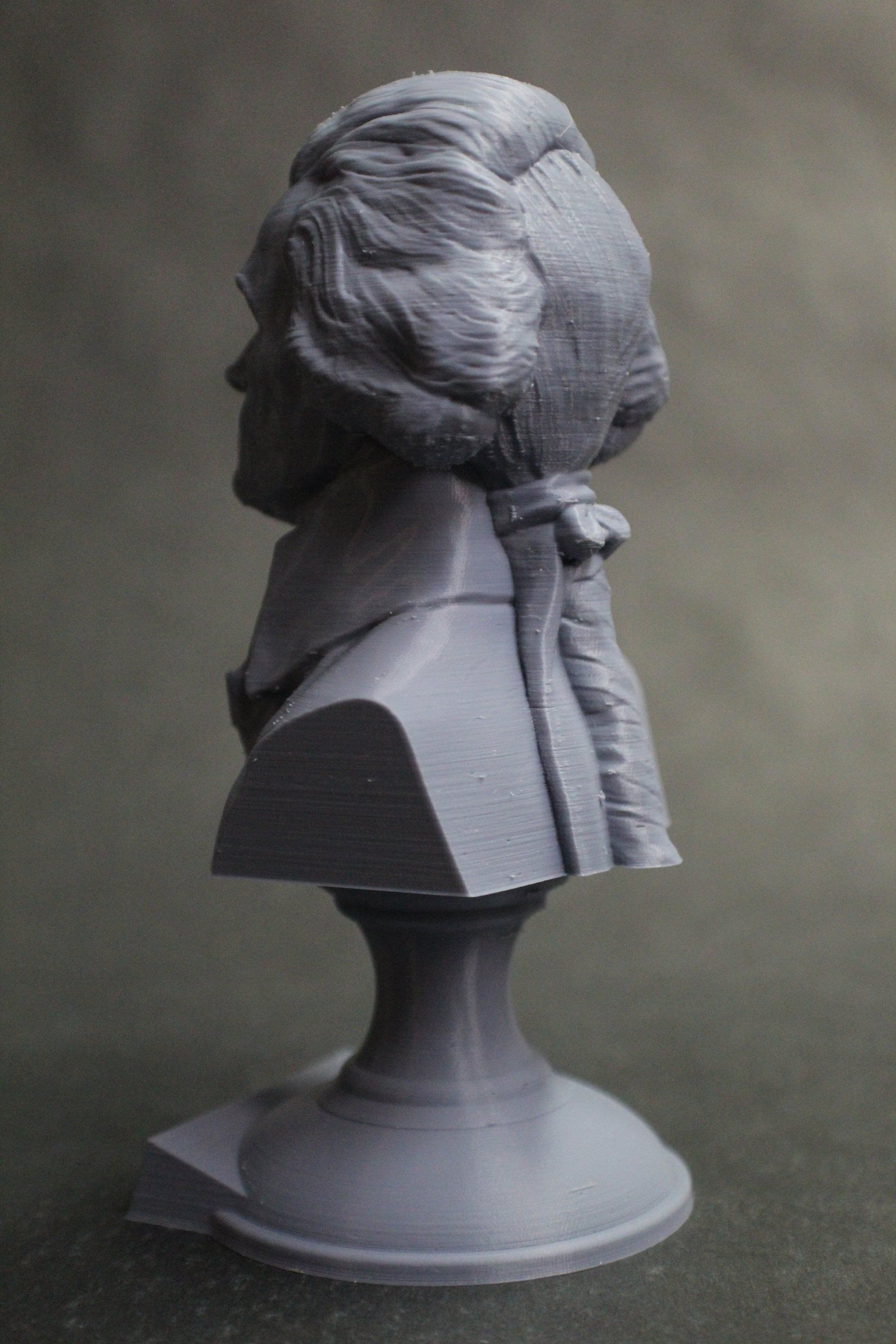 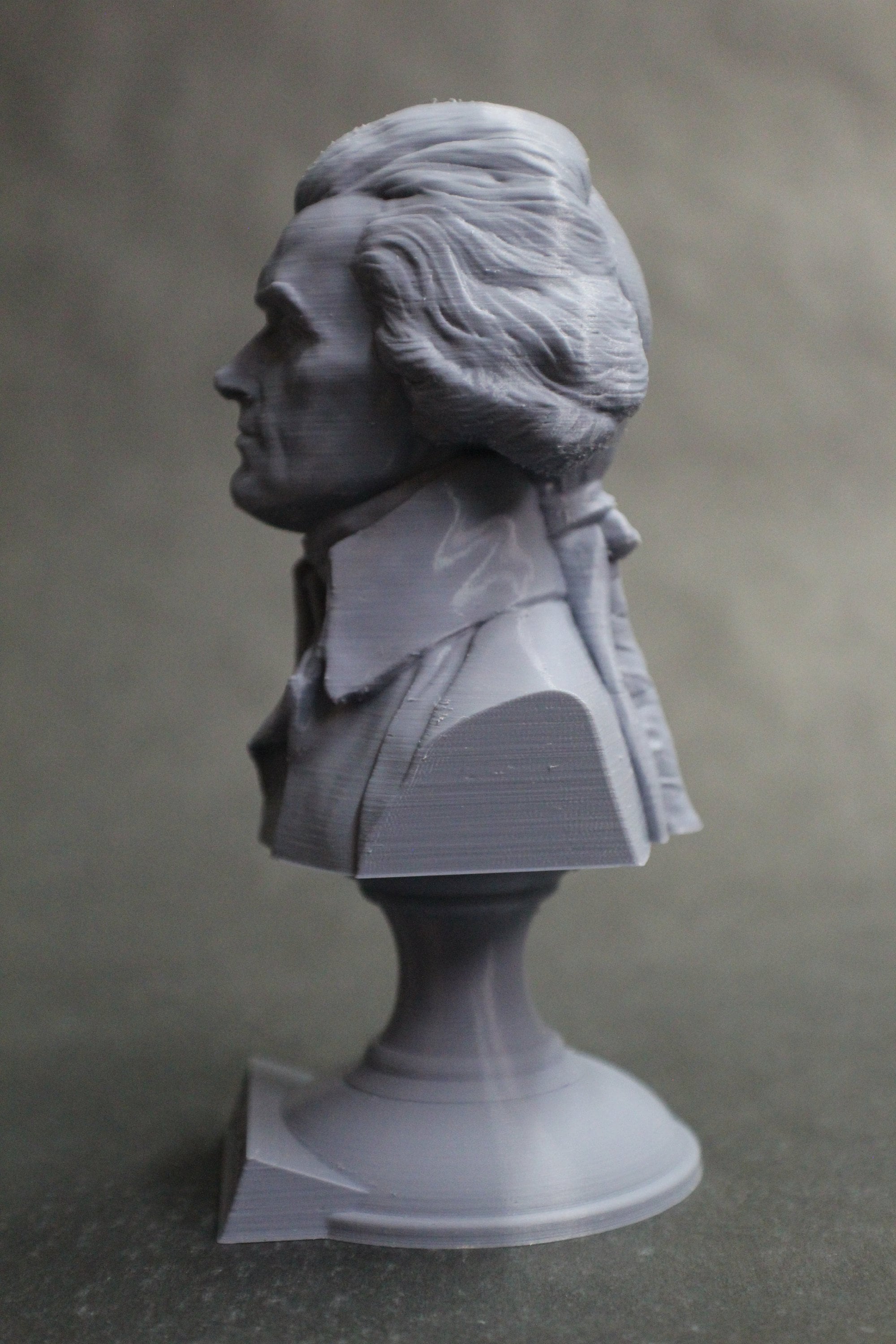 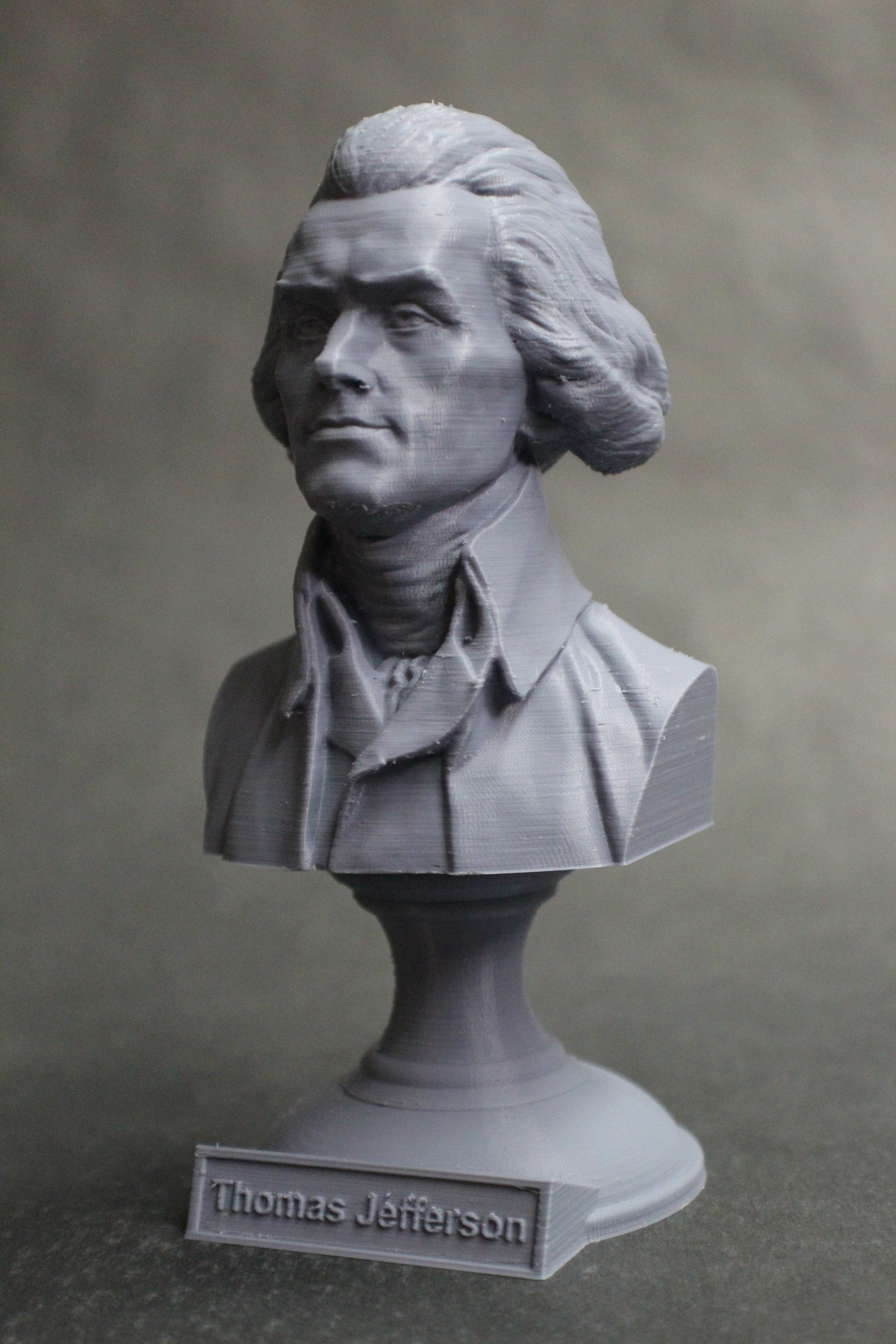 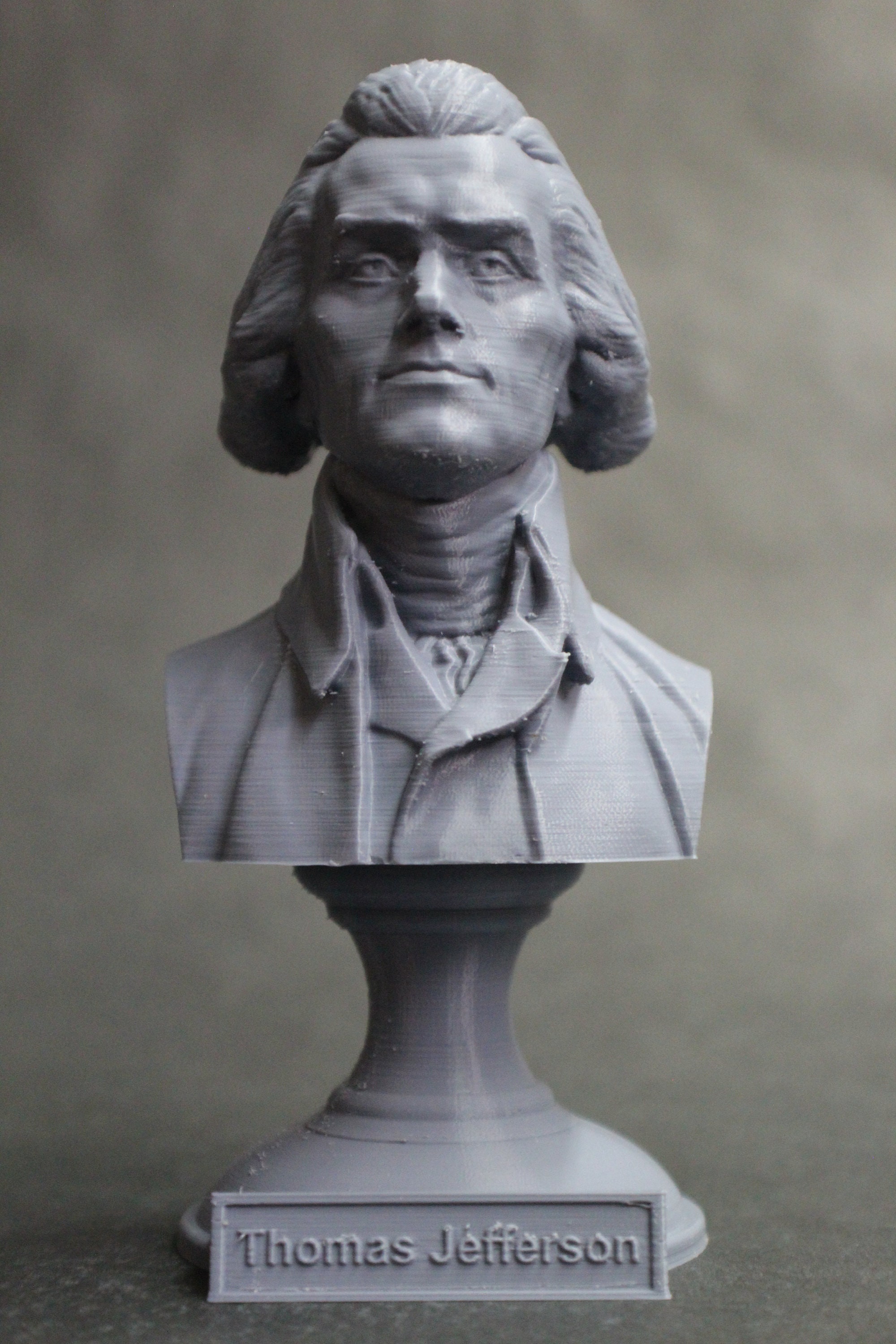 This 3D printed bust of Thomas Jefferson, the third United States President. This one is printed in a gray PLA, giving it a detailed look and a surprise whenever someone picks it up to discover it's actual weight. It is more durable than alabaster or plaster, and is washable with lukewarm soapy water for easy spring cleaning. It comes on a custom plinth that has his name on the front.

Thomas Jefferson (April 13, 1743 – July 4, 1826) was an American Founding Father who was the principal author of the Declaration of Independence and later served as the third President of the United States from 1801 to 1809. Previously, he had been elected the second Vice President of the United States, serving under John Adams from 1797 to 1801. He was a proponent of democracy, republicanism, and individual rights motivating American colonists to break from Great Britain and form a new nation; he produced formative documents and decisions at both the state and national level.

Jefferson was mainly of English ancestry, born and educated in colonial Virginia. He graduated from the College of William & Mary and briefly practiced law, with the largest number of his cases concerning land ownership claims. During the American Revolution, he represented Virginia in the Continental Congress that adopted the Declaration, drafted the law for religious freedom as a Virginia legislator, and served as a wartime governor (1779–1781). He became the United States Minister to France in May 1785, and subsequently the nation's first Secretary of State in 1790–1793 under President George Washington. Jefferson and James Madison organized the Democratic-Republican Party to oppose the Federalist Party during the formation of the First Party System. With Madison, he anonymously wrote the controversial Kentucky and Virginia Resolutions in 1798–1799, which sought to strengthen states' rights by nullifying the federal Alien and Sedition Acts.

As President, Jefferson pursued the nation's shipping and trade interests against Barbary pirates and aggressive British trade policies. He also organized the Louisiana Purchase, almost doubling the country's territory. As a result of peace negotiations with France, his administration reduced military forces. He was reelected in 1804. Jefferson's second term was beset with difficulties at home, including the trial of former Vice President Aaron Burr. American foreign trade was diminished when Jefferson implemented the Embargo Act of 1807, responding to British threats to U.S. shipping. In 1803, Jefferson began a controversial process of Indian tribe removal to the newly organized Louisiana Territory, and he signed the Act Prohibiting Importation of Slaves in 1807.

This is awesome! It looks just like marble, and it's amazingly detailed.

The item looks like marble (I ordered the marble color). Only when you pick it up can you tell it's not stone. The only issue is that the name can't be seen easily because it is made of the same material. But I plan to get paint or a marker to have it stand out. Very impressed by this bust.