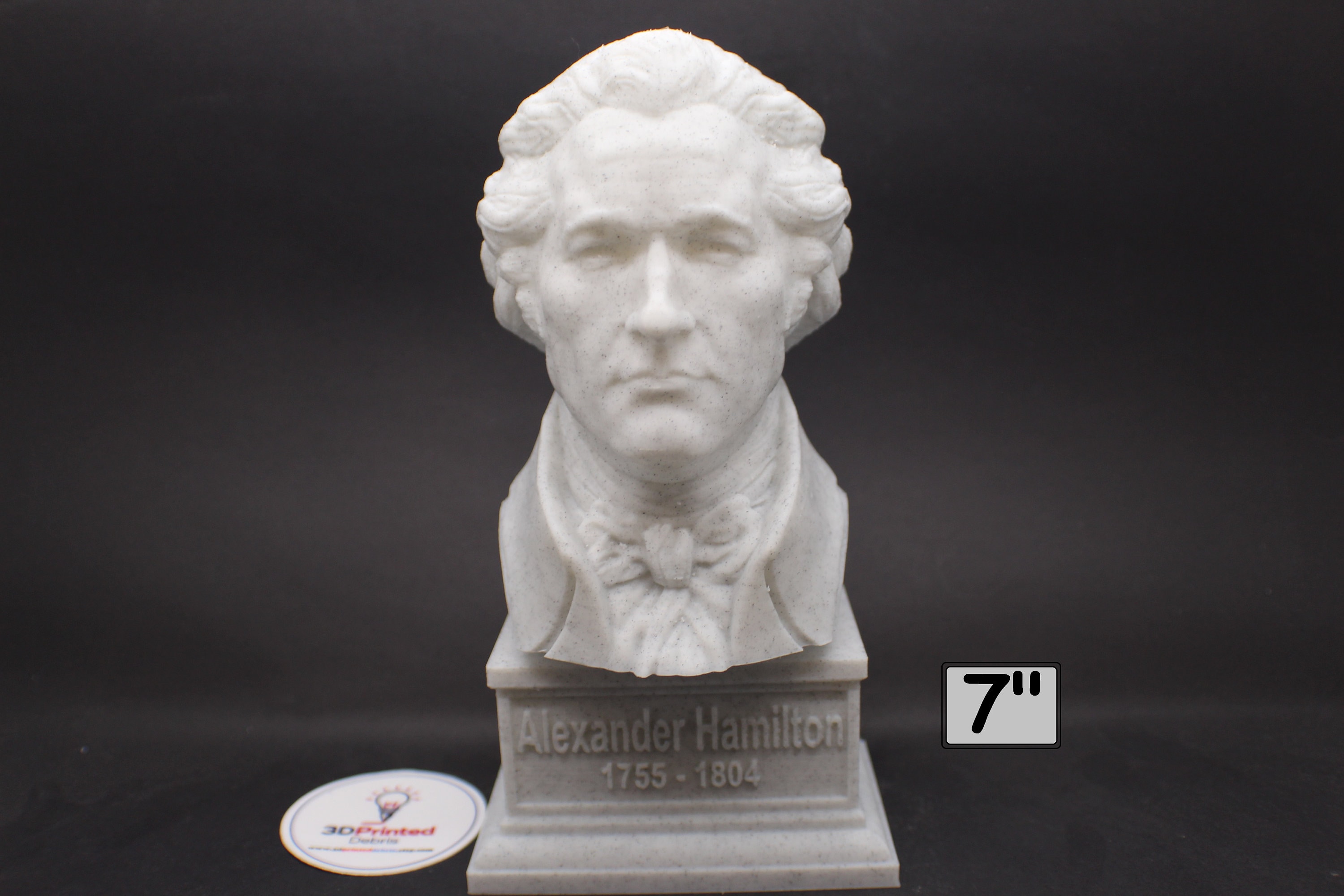 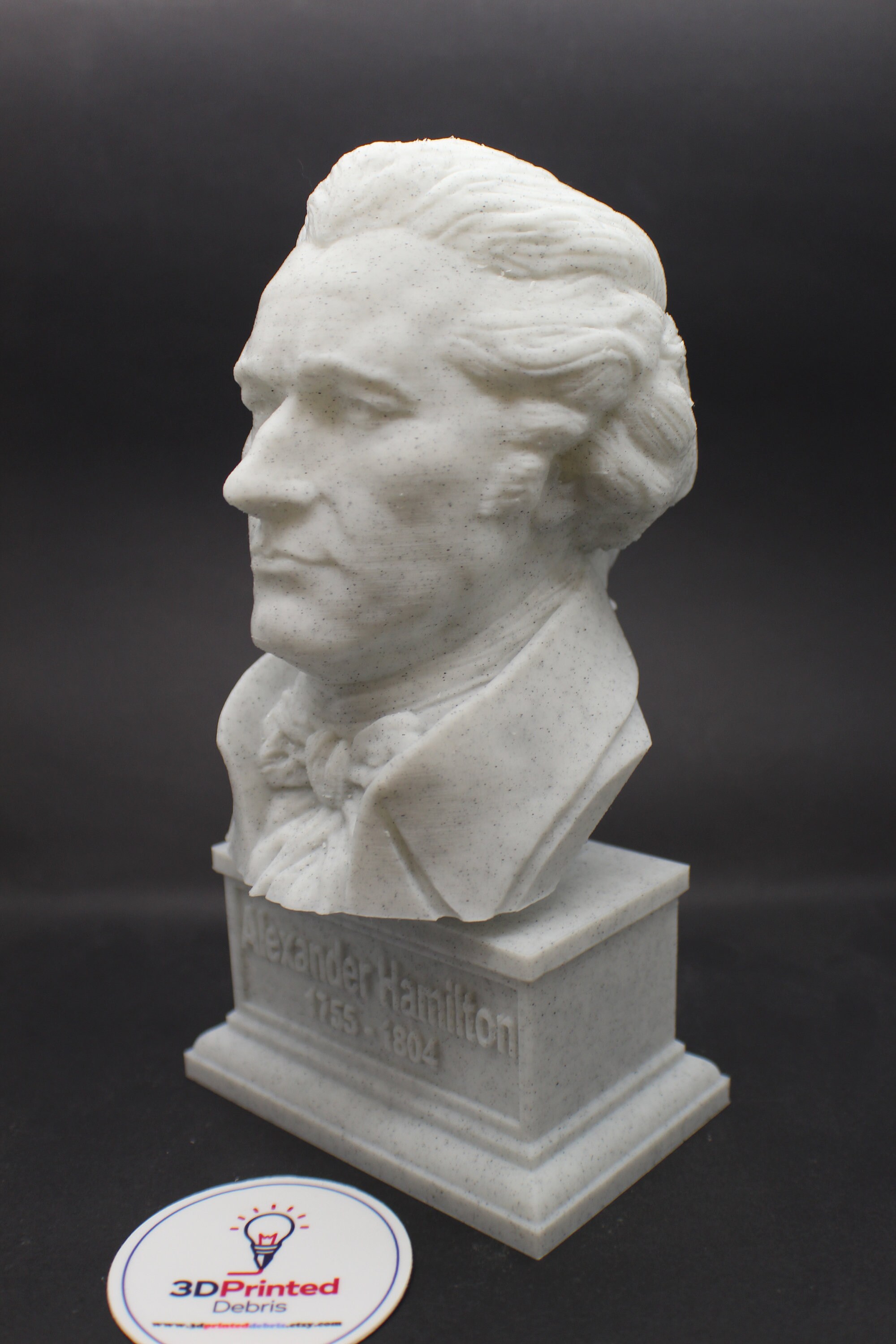 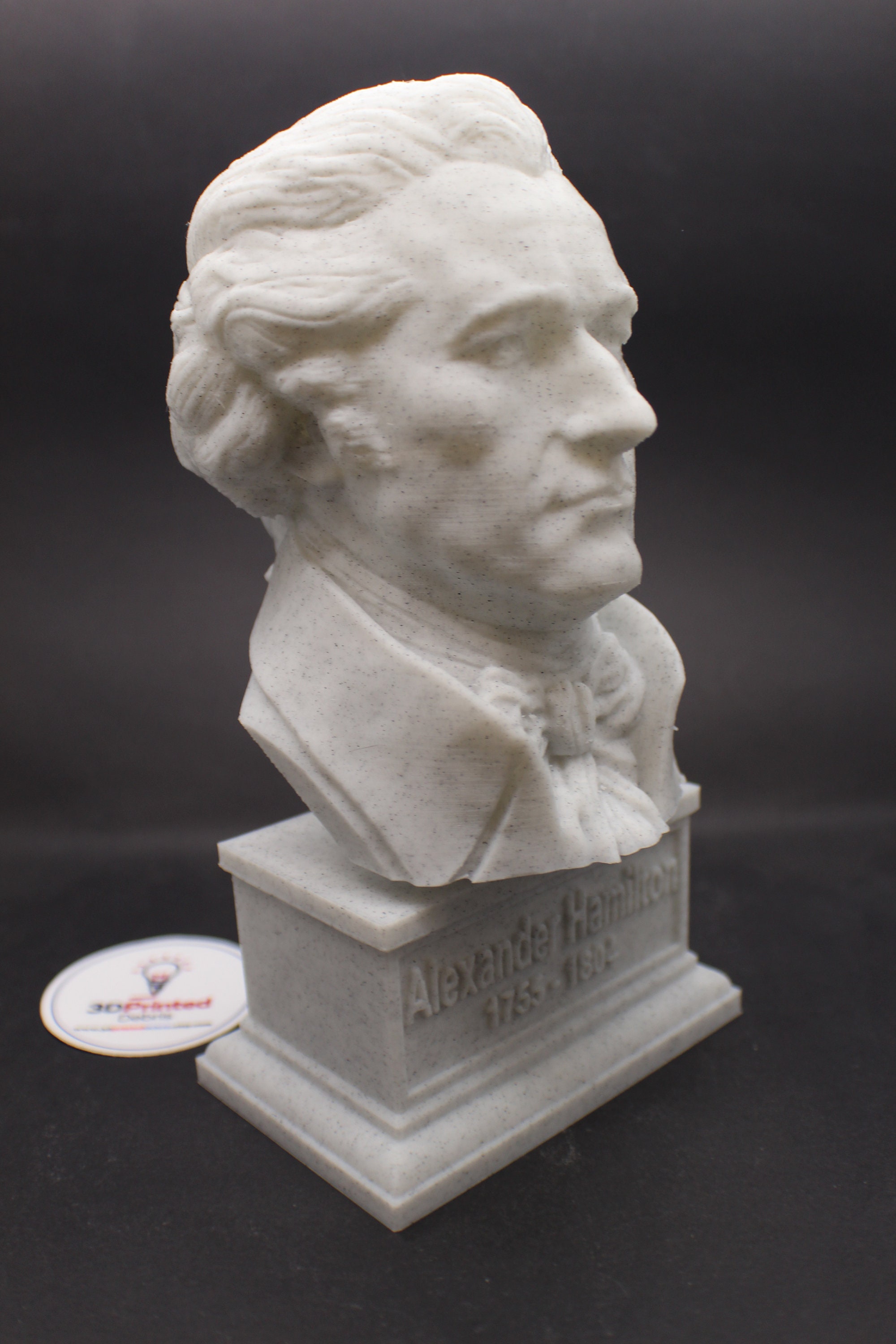 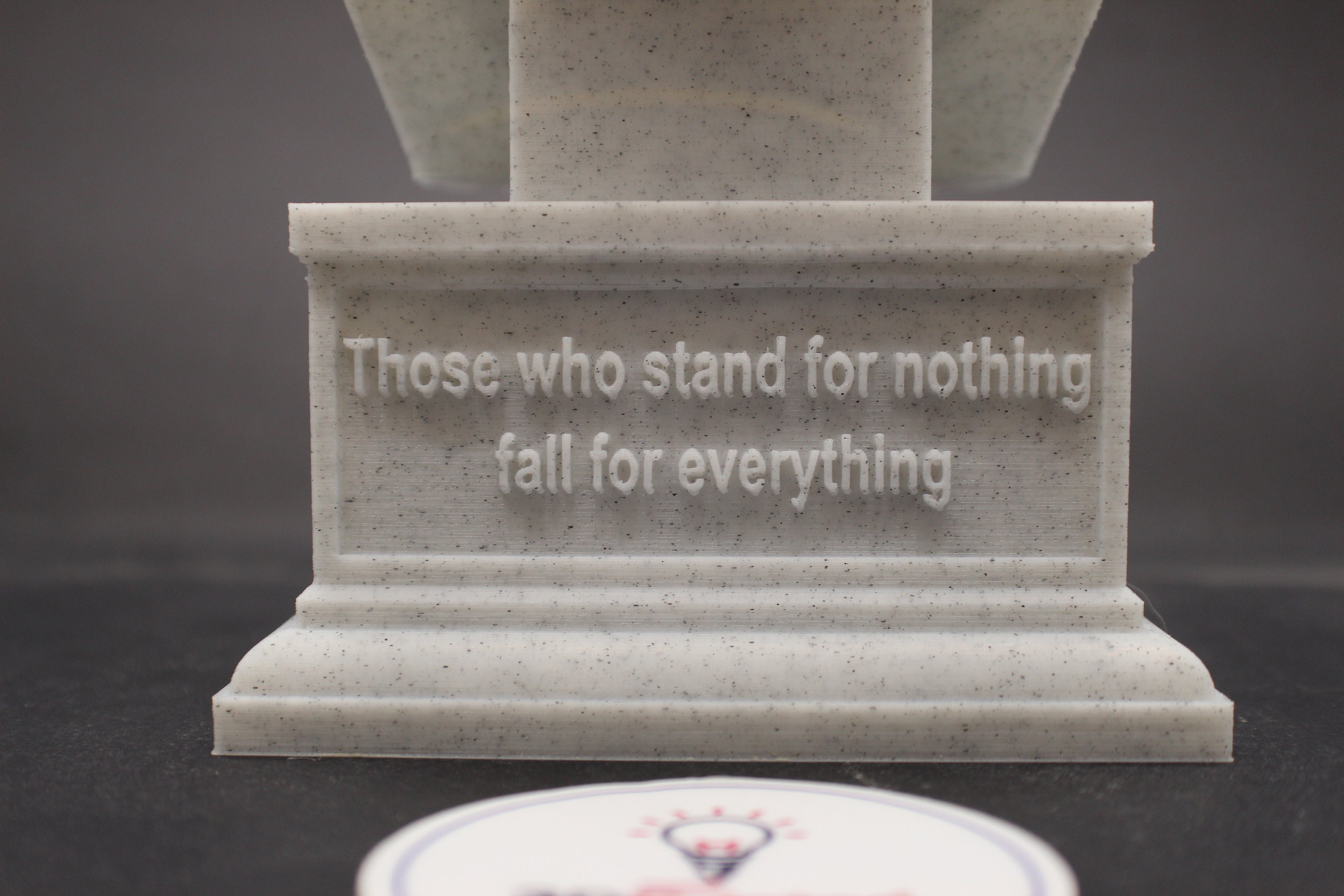 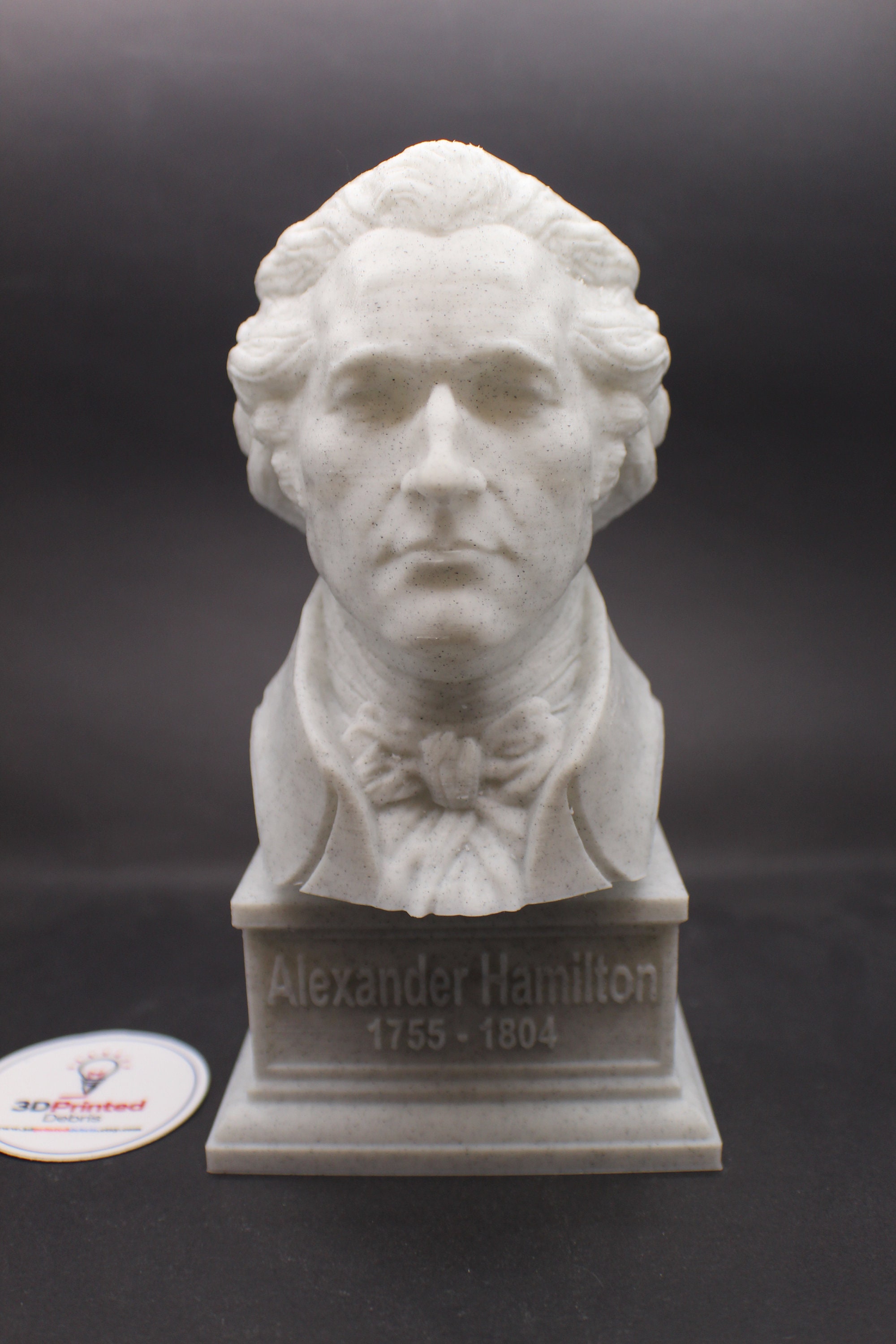 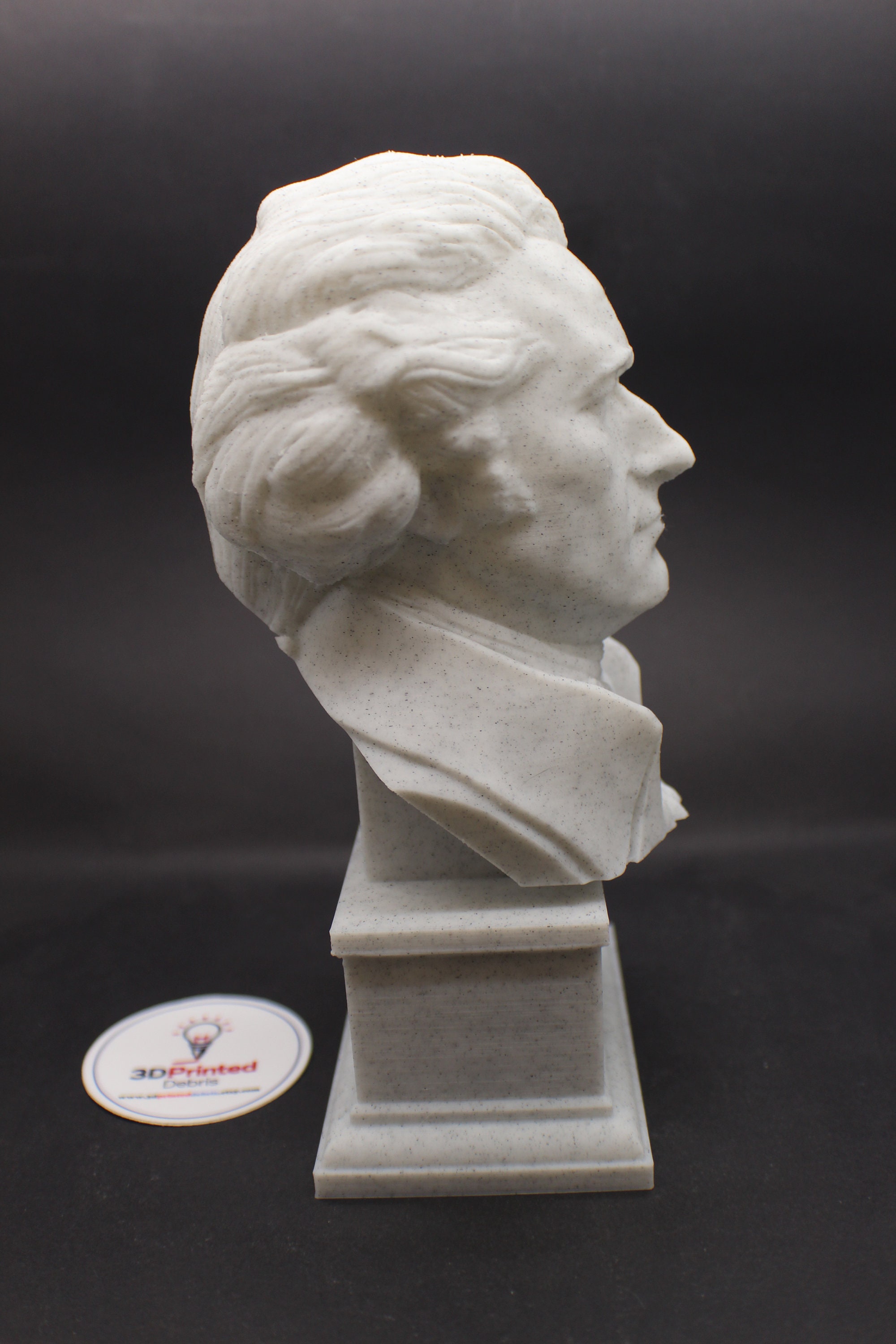 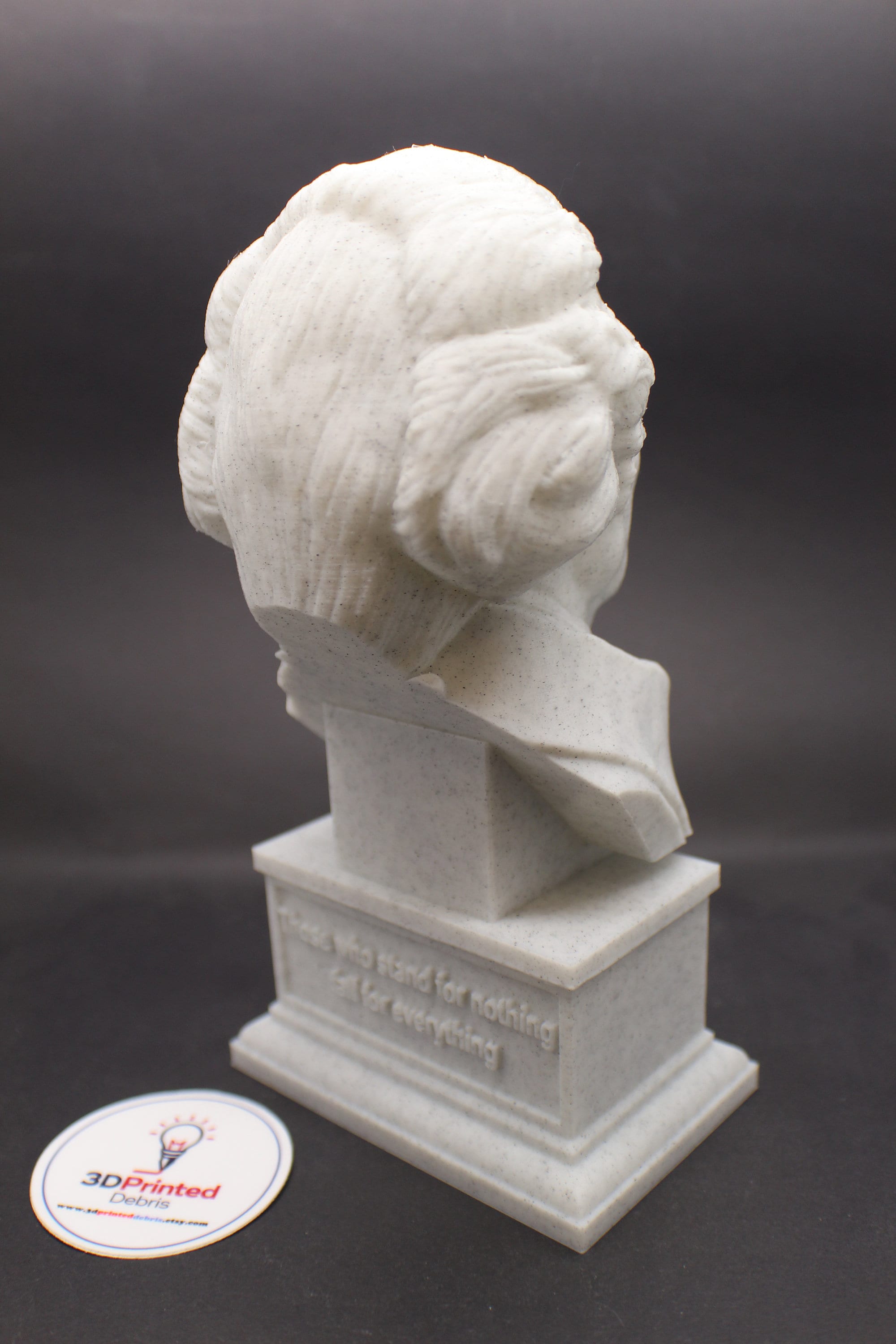 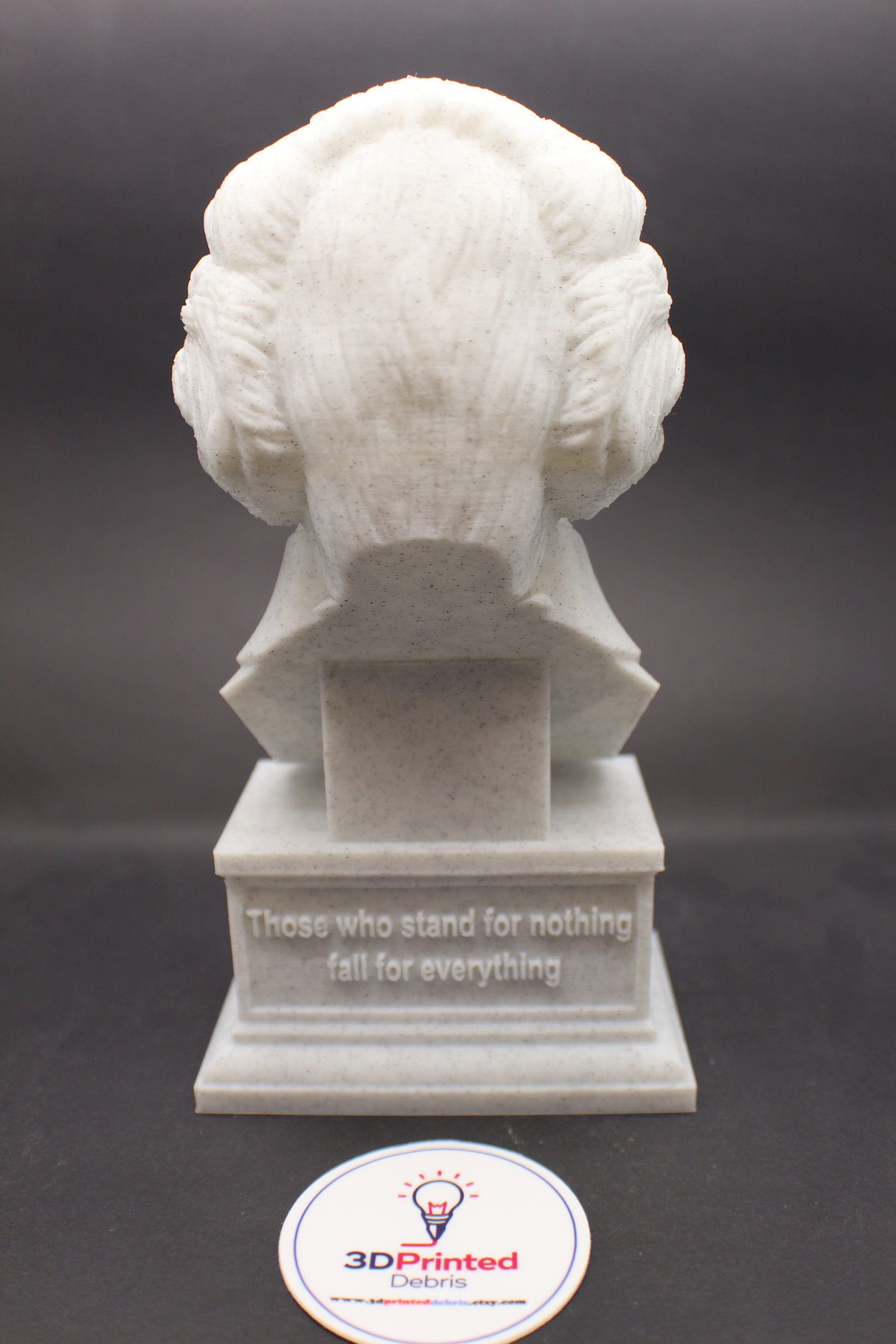 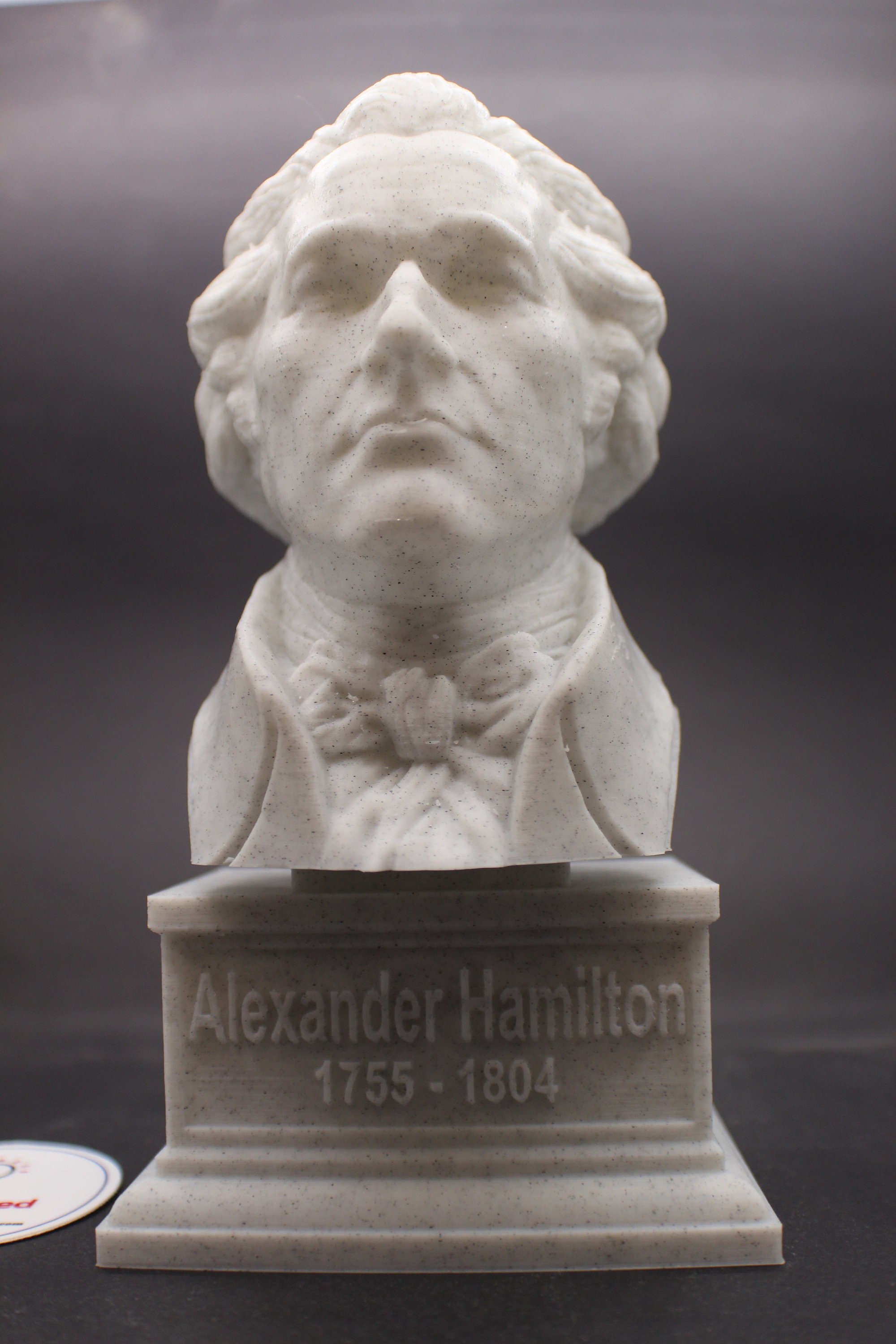 This 3D printed bust of Alexander Hamilton. This one is printed in a marble PLA, giving it a realistic stone look and a surprise whenever someone picks it up to discover it's actual weight. It is more durable than alabaster or plaster, and is washable with lukewarm soapy water for easy spring cleaning. It comes on a custom plinth that has his lifetime on the front, and the quote:

"Those that stand for nothing fall for everything" on the back.

Alexander Hamilton (January 11, 1755 or 1757 – July 12, 1804) was an American statesman and one of the Founding Fathers of the United States. He was an influential interpreter and promoter of the U.S. Constitution, as well as the founder of the nation's financial system, the Federalist Party, the United States Coast Guard, and the New York Post newspaper. As the first Secretary of the Treasury, Hamilton was the main author of the economic policies of George Washington's administration. He took the lead in the Federal government's funding of the states' debts, as well as establishing a national bank, a system of tariffs, and friendly trade relations with Britain. His vision included a strong central government led by a vigorous executive branch, a strong commercial economy, a national bank and support for manufacturing, and a strong military. Thomas Jefferson was his leading opponent, arguing for agrarianism and smaller government.

Hamilton was born out of wedlock in Charlestown, Nevis. He was orphaned as a child and taken in by a prosperous merchant. When he reached his teens, he was sent to New York to pursue his education. He took an early role in the militia as the American Revolutionary War began. In 1777, he became a senior aide to General Washington in running the new Continental Army. After the war, he was elected as a representative from New York to the Congress of the Confederation. He resigned to practice law and founded the Bank of New York.

Hamilton was a leader in seeking to replace the weak national government under the Articles of Confederation; he led the Annapolis Convention of 1786, which spurred Congress to call a Constitutional Convention in Philadelphia. He helped ratify the Constitution by writing 51 of the 85 installments of The Federalist Papers, which are still used as one of the most important references for Constitutional interpretation.

Hamilton led the Treasury Department as a trusted member of President Washington's first Cabinet. Hamilton successfully argued that the implied powers of the Constitution provided the legal authority to fund the national debt, to assume states' debts, and to create the government-backed Bank of the United States. These programs were funded primarily by a tariff on imports, and later by a controversial whiskey tax. He mobilized a nationwide network of friends of the government, especially bankers and businessmen, which became the Federalist Party. A major issue in the emergence of the American two-party system was the Jay Treaty, largely designed by Hamilton in 1794. It established friendly trade relations with Britain, to the chagrin of France and supporters of the French Revolution. Hamilton played a central role in the Federalist party, which dominated national and state politics until it lost the election of 1800 to Jefferson's Democratic-Republican Party.

In 1795, he returned to the practice of law in New York. He called for mobilization against the French First Republic in 1798–99 under President John Adams, and became Commanding General of the previously disbanded U.S. Army, which he reconstituted, modernized, and readied for war. The army did not see combat in the Quasi-War, and Hamilton was outraged by Adams' diplomatic success in resolving the crisis with France. His opposition to Adams' re-election helped cause the Federalist party defeat in 1800. Jefferson and Aaron Burr tied for the presidency in the electoral college in 1801, and Hamilton helped to defeat Burr, whom he found unprincipled, and to elect Jefferson despite philosophical differences.

Hamilton continued his legal and business activities in New York City, and was active in ending the legality of the international slave trade. Vice President Burr ran for governor of New York State in 1804, and Hamilton campaigned against him as unworthy. Taking offense, Burr challenged him to a duel on July 11, 1804, in which Burr shot and mortally wounded Hamilton, who died the following day.