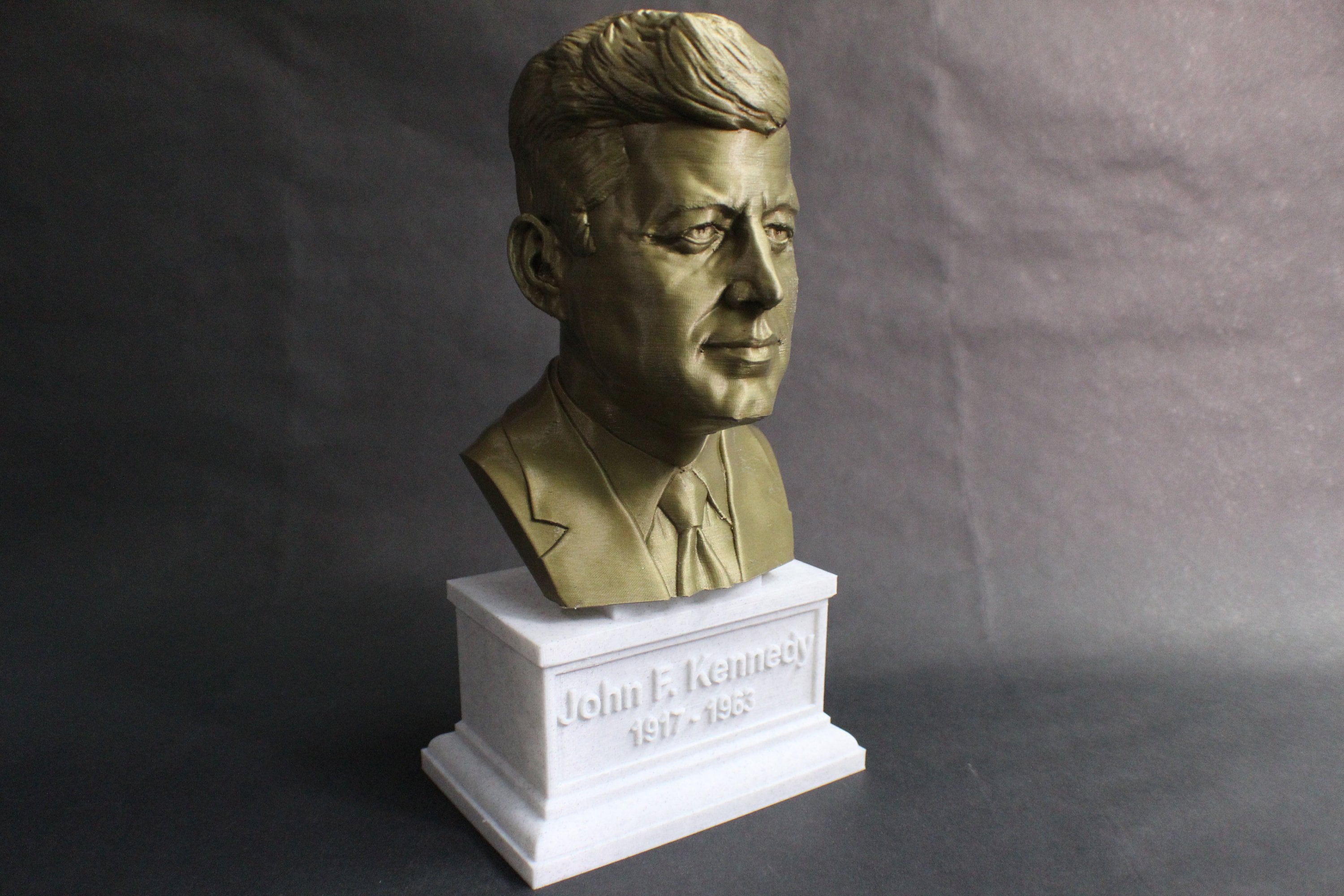 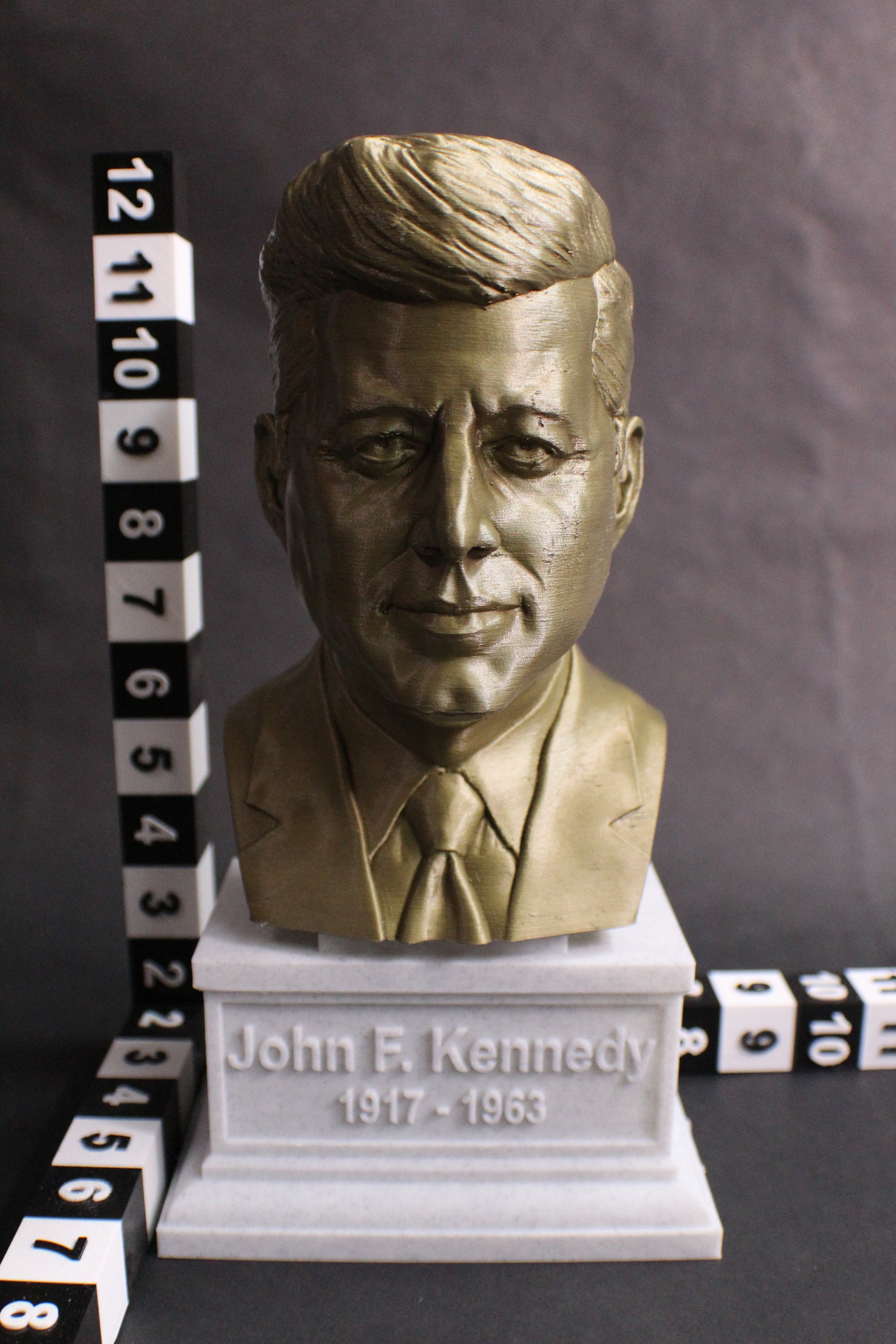 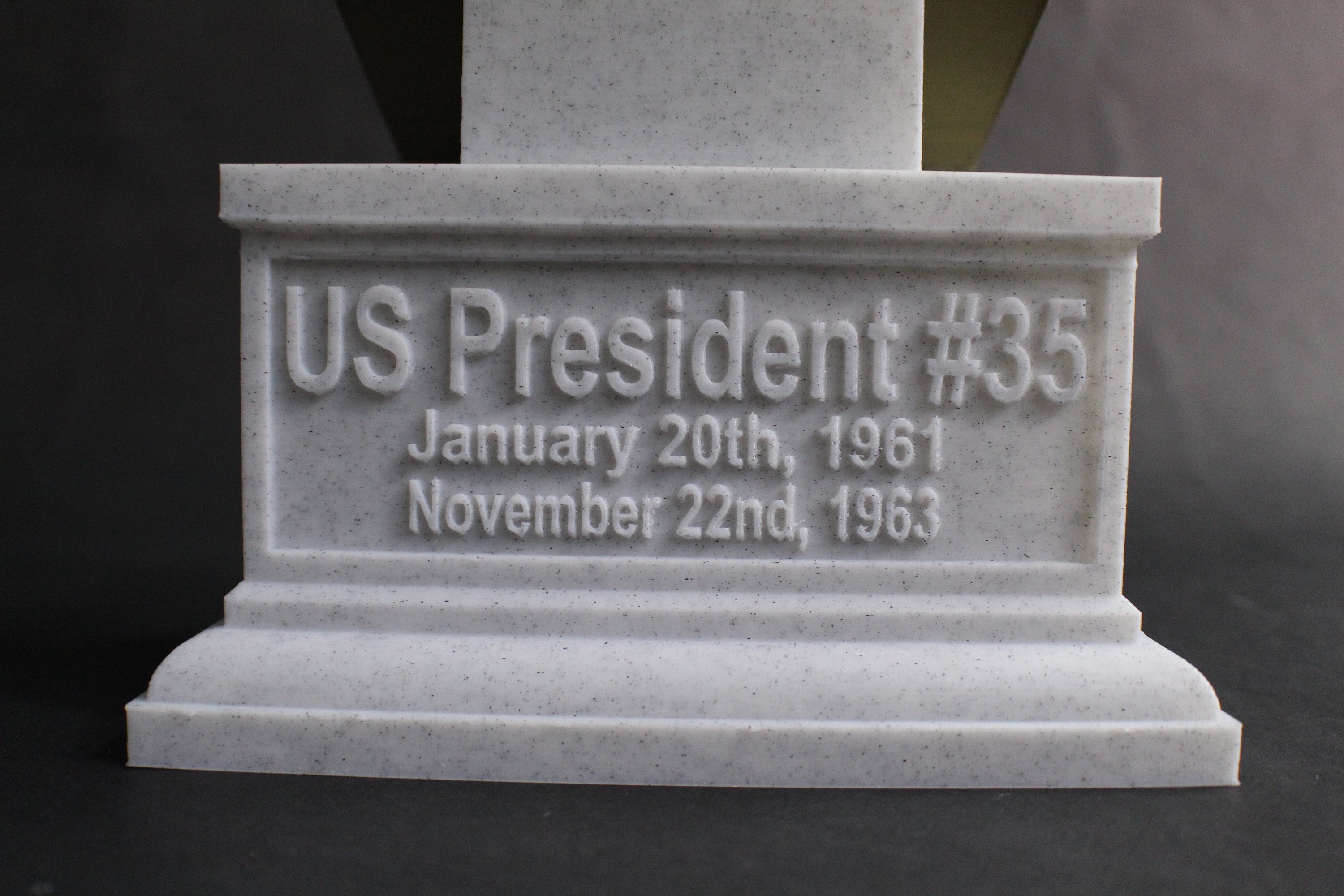 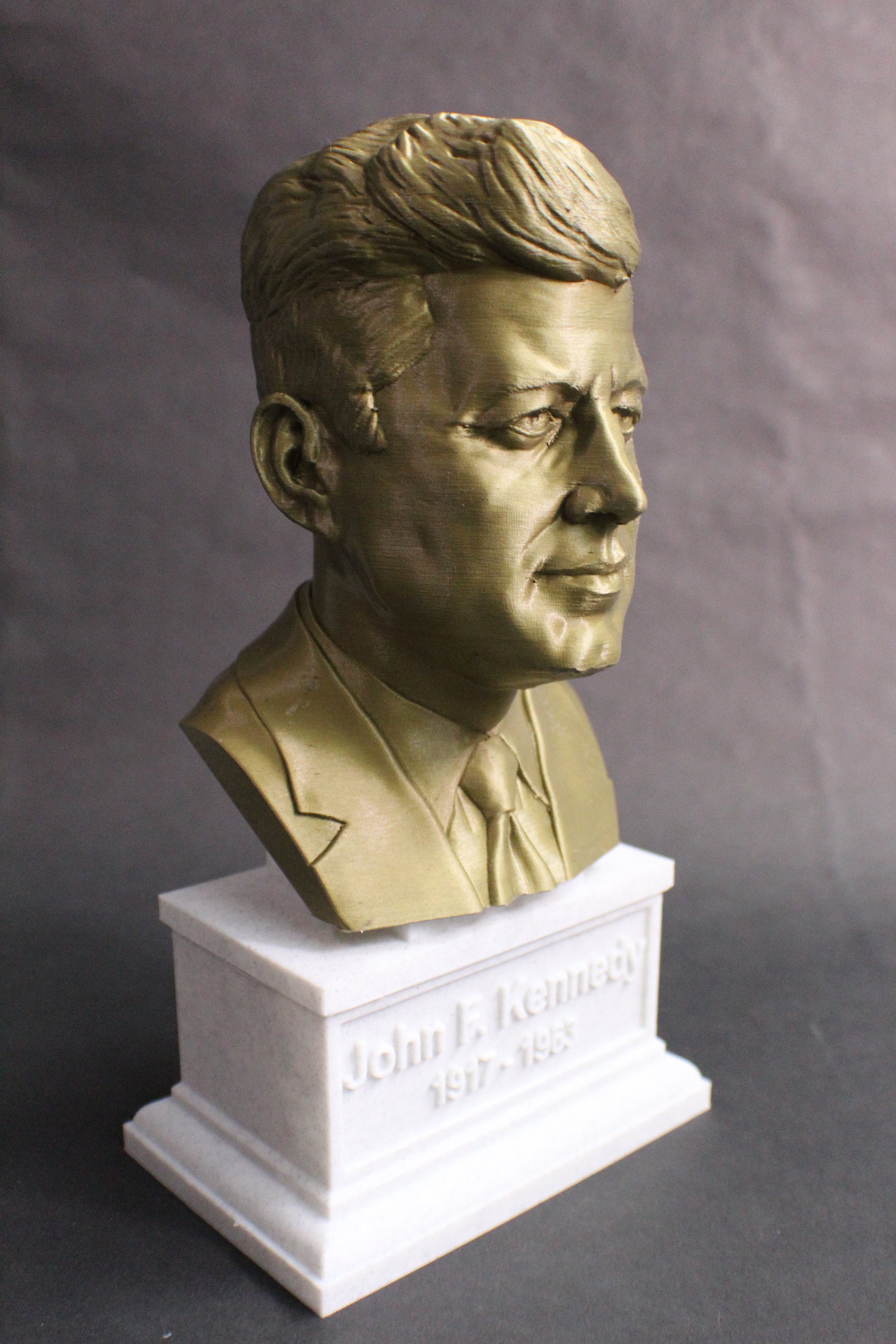 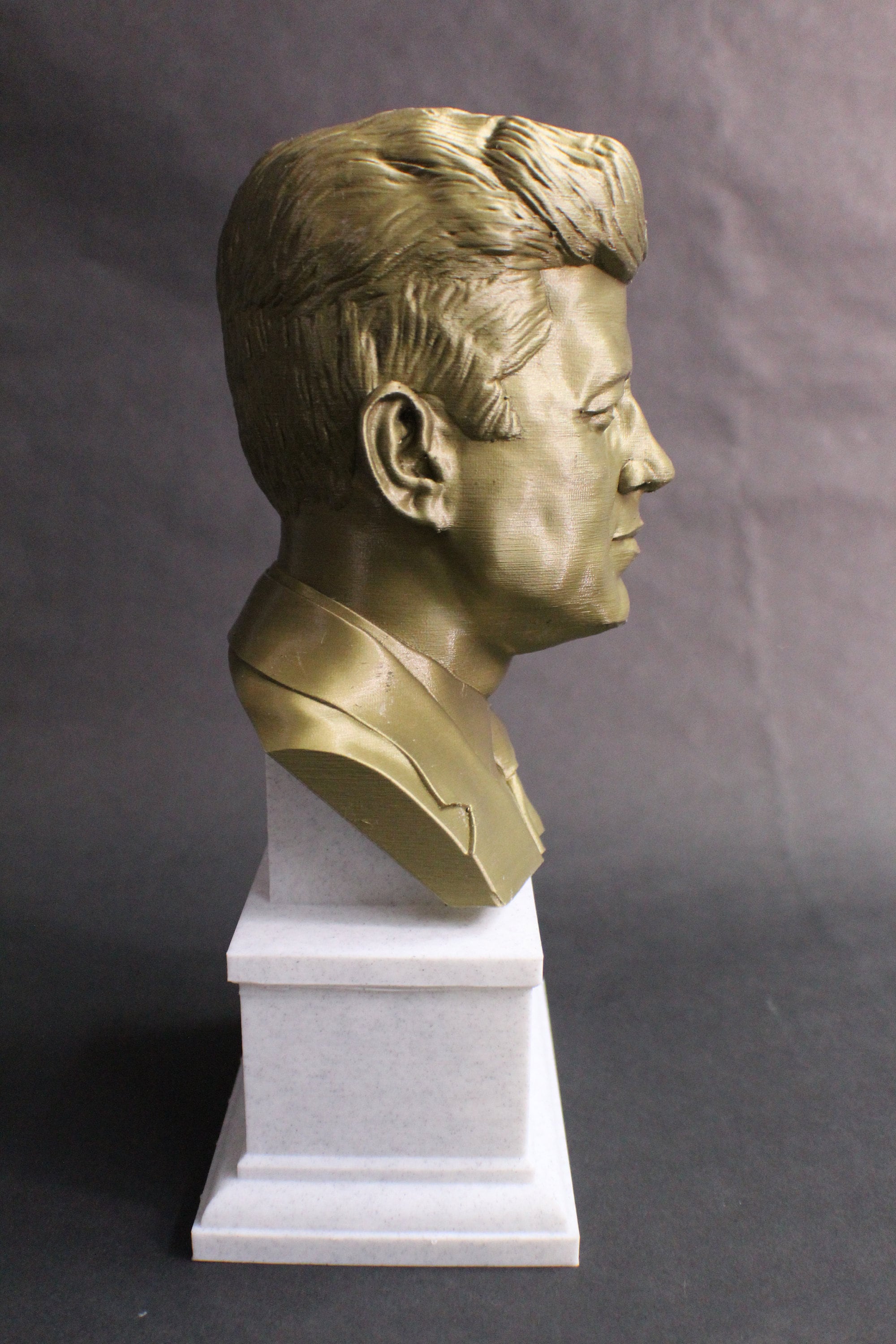 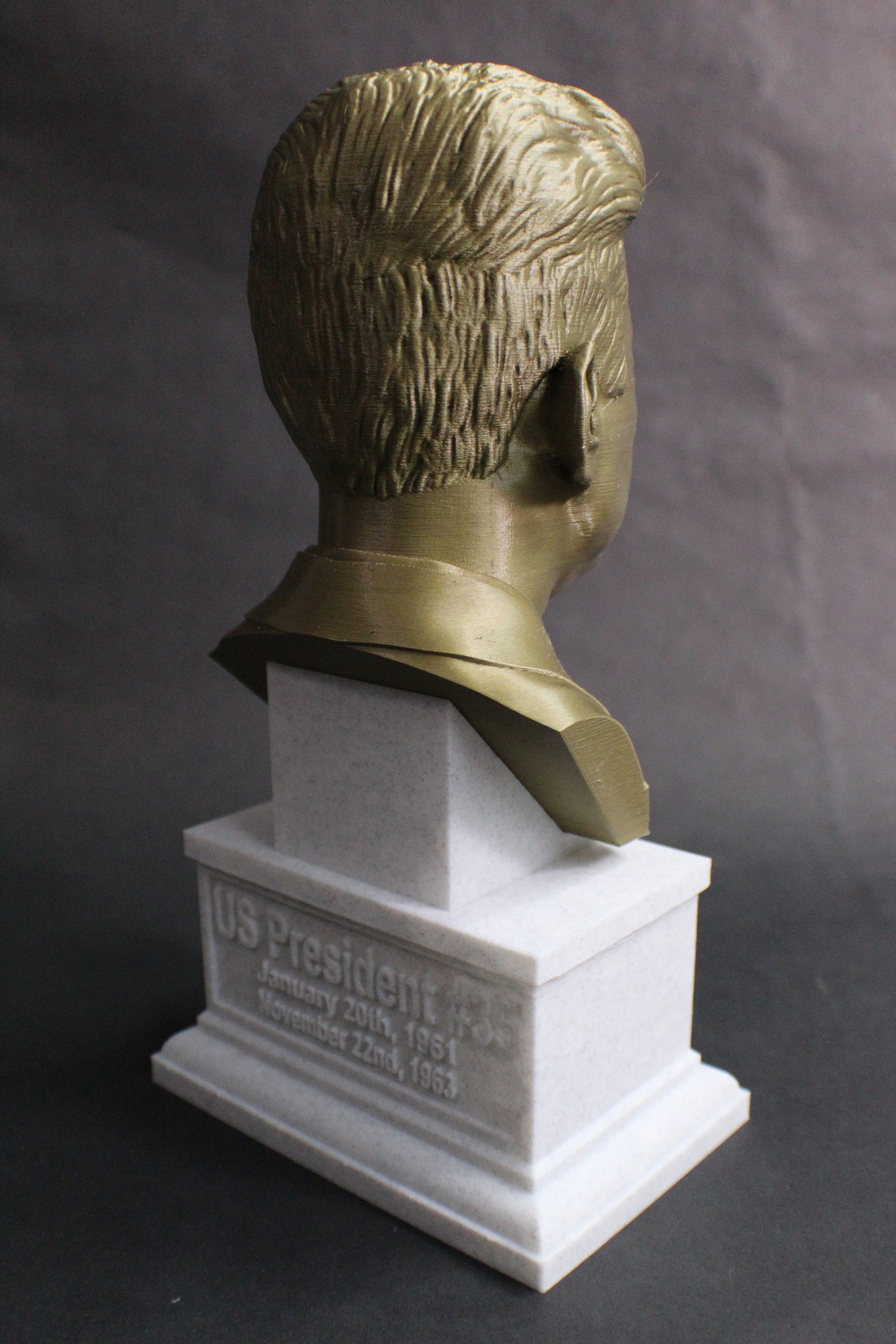 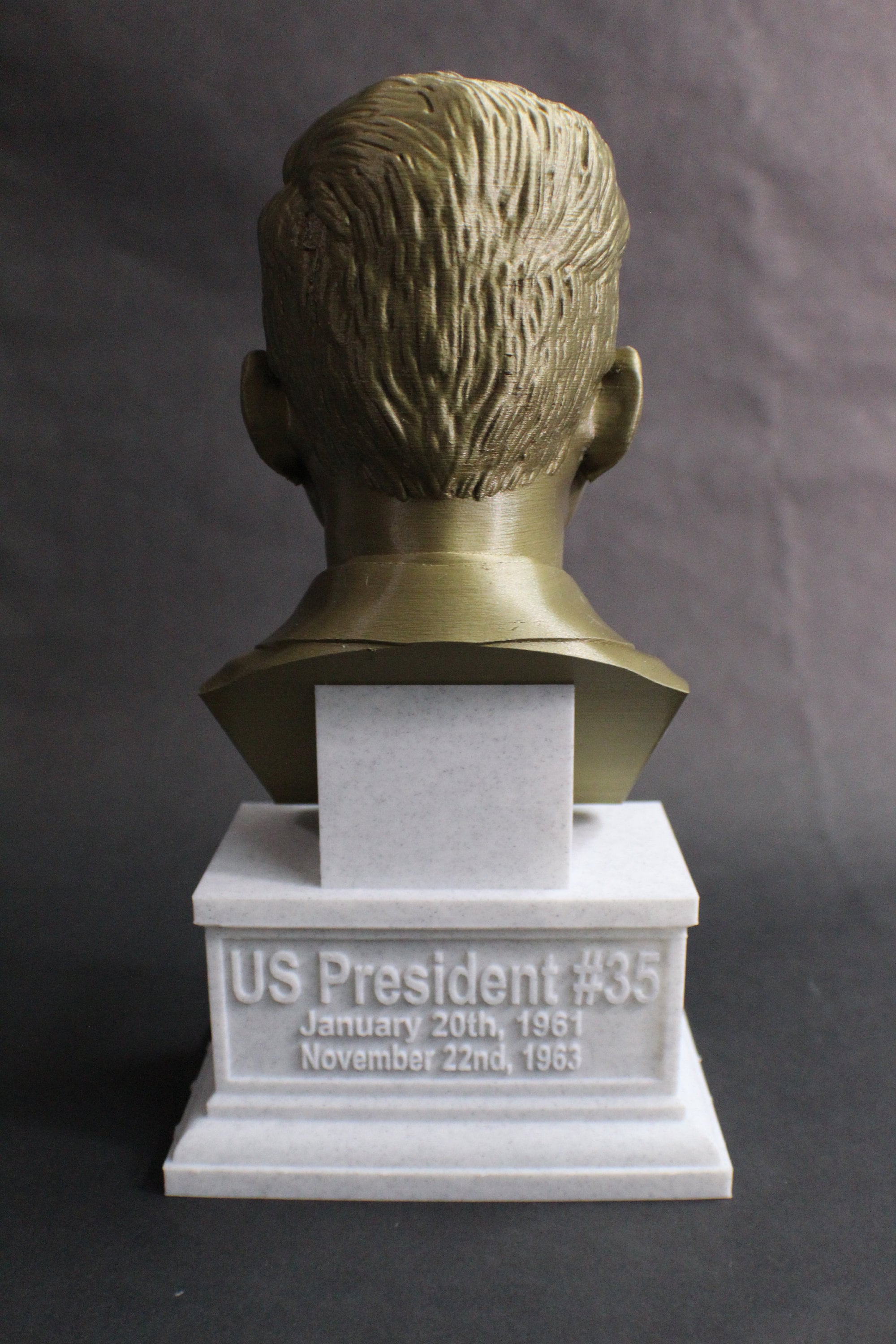 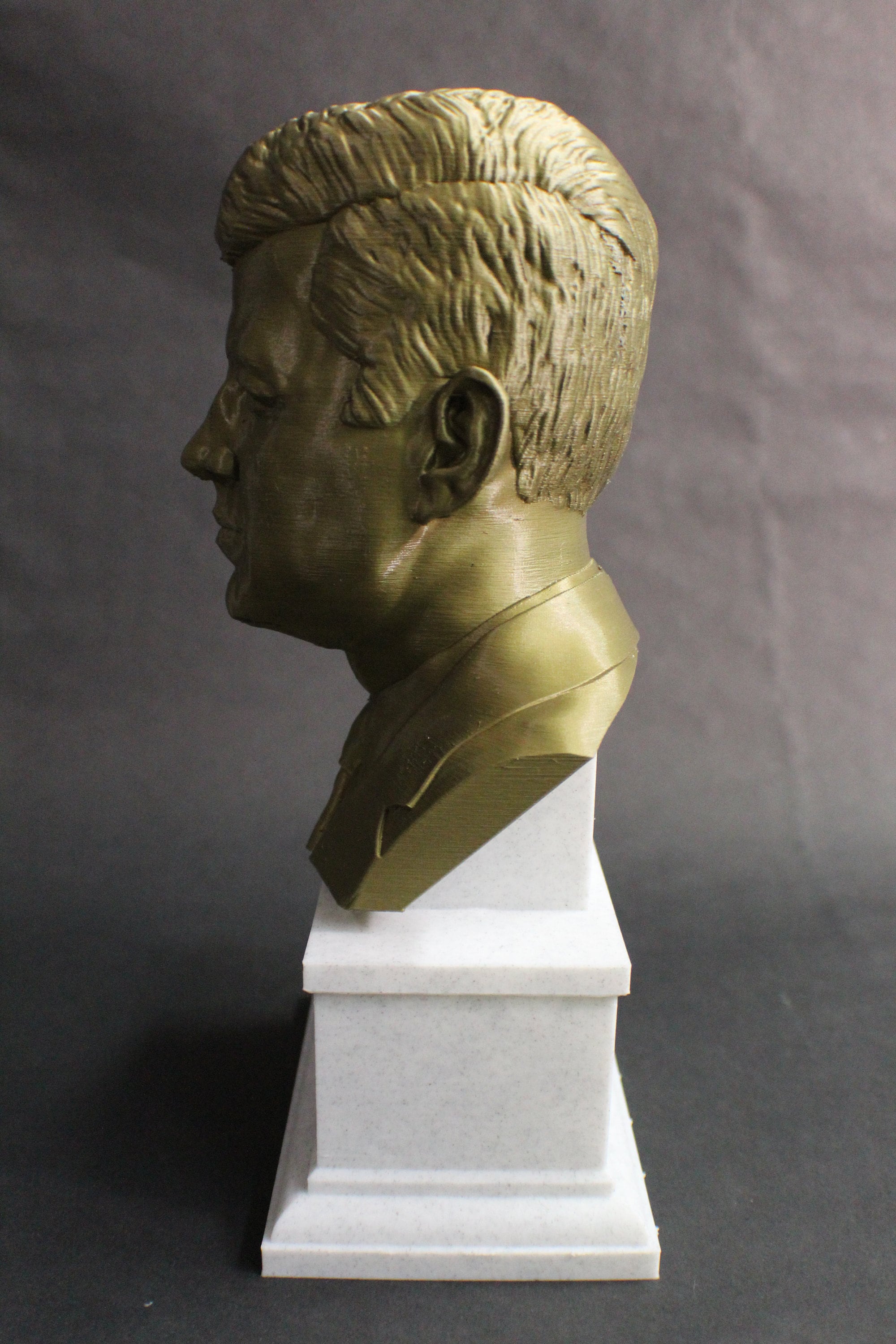 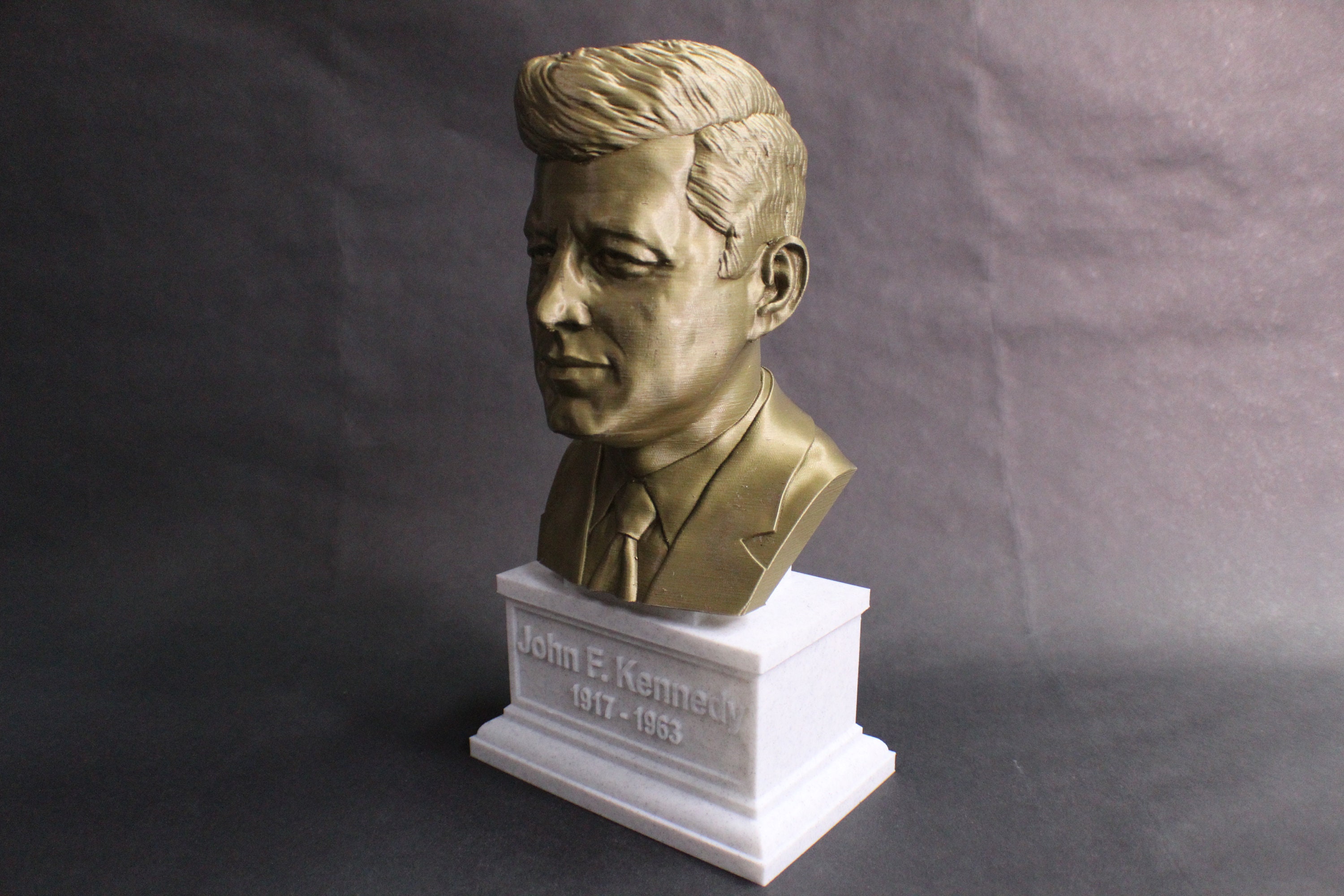 This 3D printed bust of John F. Kennedy, the thirty-fifth United States President. This one is printed in a bronze and marble PLA, giving it a realistic metal/stone look and a surprise whenever someone picks it up to discover it's actual weight. It is more durable than alabaster or plaster, and is washable with lukewarm soapy water for easy spring cleaning. It comes on a custom plinth that has his lifetime on the front, and his dates in office as president on the back.

John Fitzgerald "Jack" Kennedy (May 29, 1917 – November 22, 1963), commonly referred to by his initials JFK, was an American politician who served as the 35th President of the United States from January 1961 until his assassination in November 1963. He served at the height of the Cold War, and the majority of his presidency dealt with managing relations with the Soviet Union. A member of the Democratic Party, Kennedy represented Massachusetts in the U.S. House of Representatives and Senate prior to becoming president.

Kennedy was born in Brookline, Massachusetts, the second child of Joseph P. Kennedy Sr. and Rose Kennedy. He graduated from Harvard University in 1940 and joined the U.S. Naval Reserve the following year. During World War II, he commanded a series of PT boats in the Pacific theater and earned the Navy and Marine Corps Medal for his service. After the war, Kennedy represented the 11th congressional district of Massachusetts in the U.S. House of Representatives from 1947 to 1953. He was subsequently elected to the U.S. Senate and served as the junior Senator from Massachusetts from 1953 to 1960. While in the Senate, he published his book entitled Profiles in Courage, which won a Pulitzer Prize for Biography. In the 1960 presidential election, Kennedy narrowly defeated Republican opponent Richard Nixon, who was the incumbent vice president. At age 43, he became the second-youngest man to serve as president (after Theodore Roosevelt), the youngest man to be elected as U.S. president as well as being the only Roman Catholic to occupy that office.

Kennedy's time in office was marked by high tensions with communist states in the Cold War. He increased the number of American military advisers in South Vietnam by a factor of 18 over President Dwight D. Eisenhower. In April 1961, he authorized a failed joint-CIA attempt to overthrow the Cuban government of Fidel Castro in the Bay of Pigs Invasion.[2] He subsequently rejected Operation Northwoods plans by the Joint Chiefs of Staff to orchestrate false flag attacks on American soil in order to gain public approval for a war against Cuba. In October 1962, U.S. spy planes discovered that Soviet missile bases had been deployed in Cuba; the resulting period of tensions, termed the Cuban Missile Crisis, nearly resulted in the breakout of a global thermonuclear conflict. Domestically, Kennedy presided over the establishment of the Peace Corps and supported the civil rights movement, but he was largely unsuccessful in passing his New Frontier domestic policies.

Although the item never arrived, I was promptly refunded. He does good work, though, and I left positive feedback for a previous purchase from him.

This is a very beautiful bust and compliments my library very well. But I definitely missed reading the small print, as I had no idea it was plastic. I should have known it wasn't stone due to the price. But I still thought it was a stone sculpture. At any rate, I did not return it because it really is a beautiful piece. Thank you.