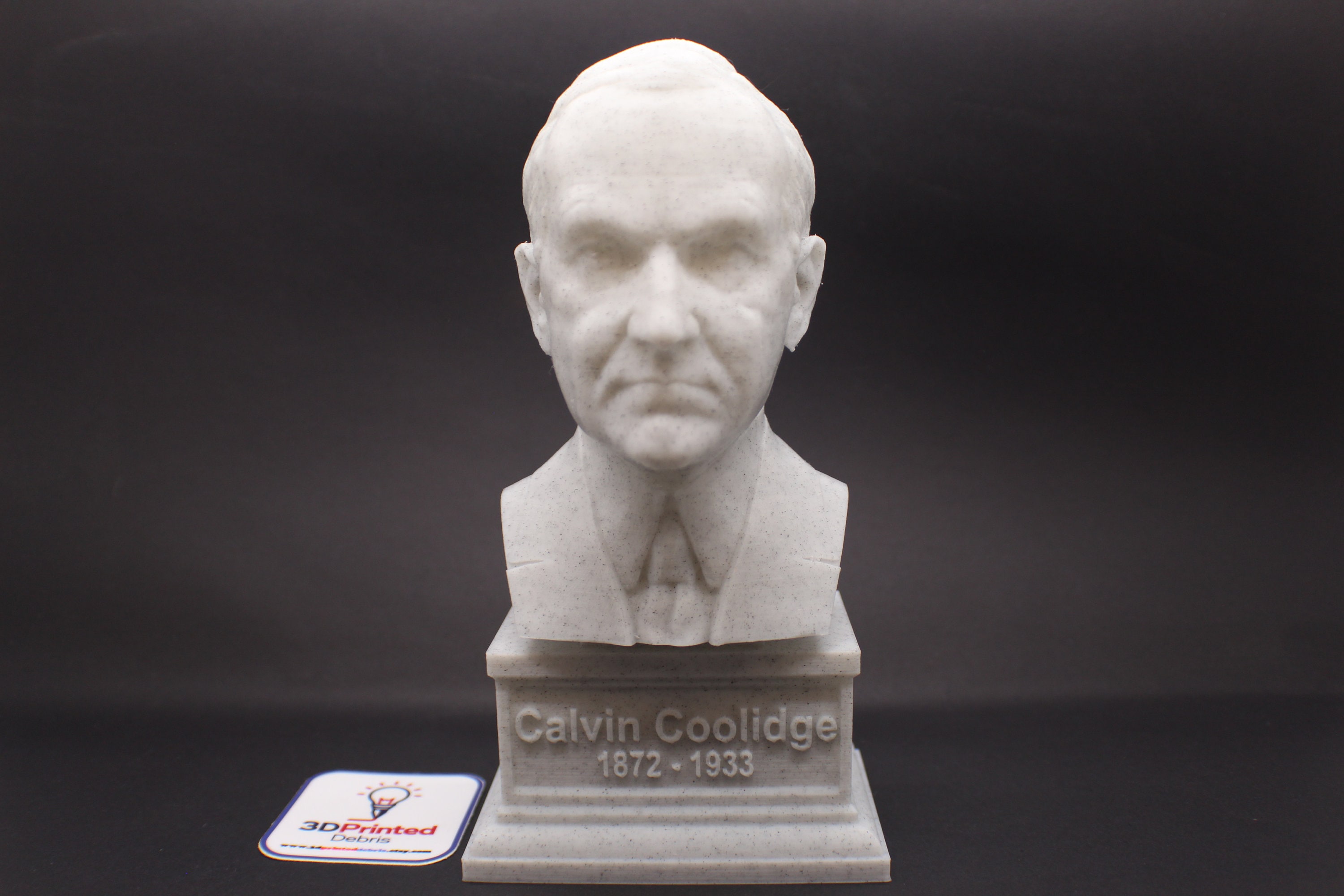 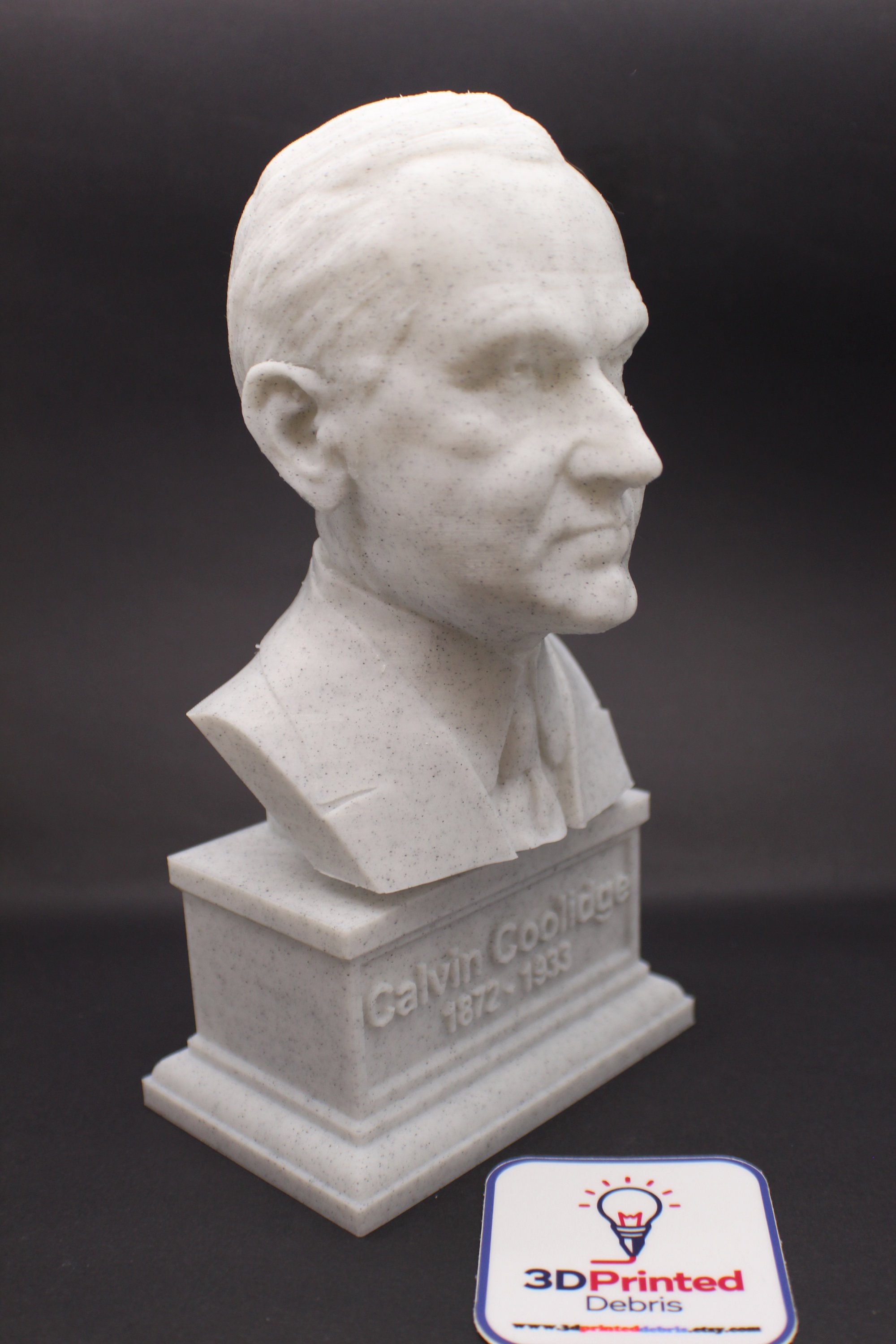 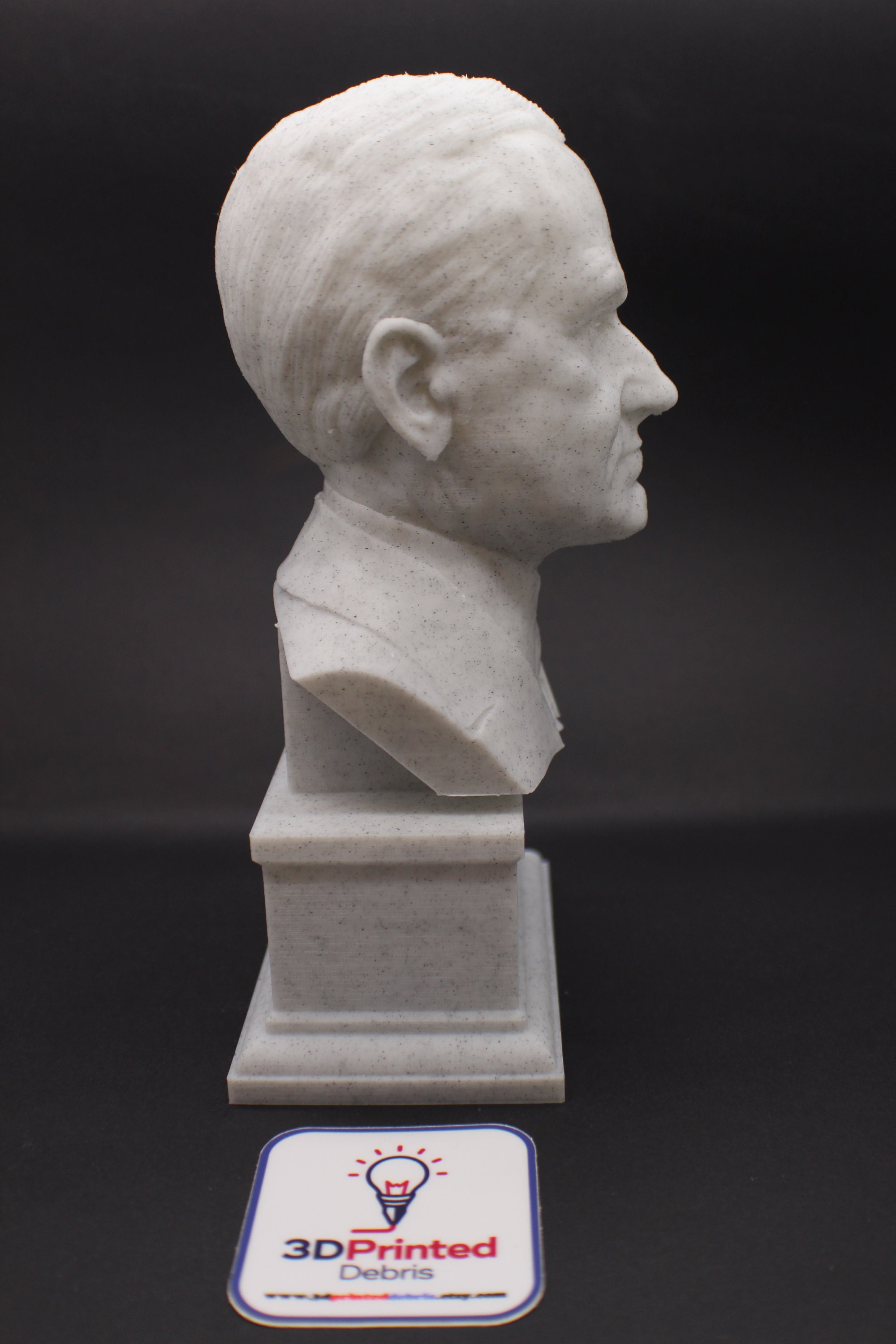 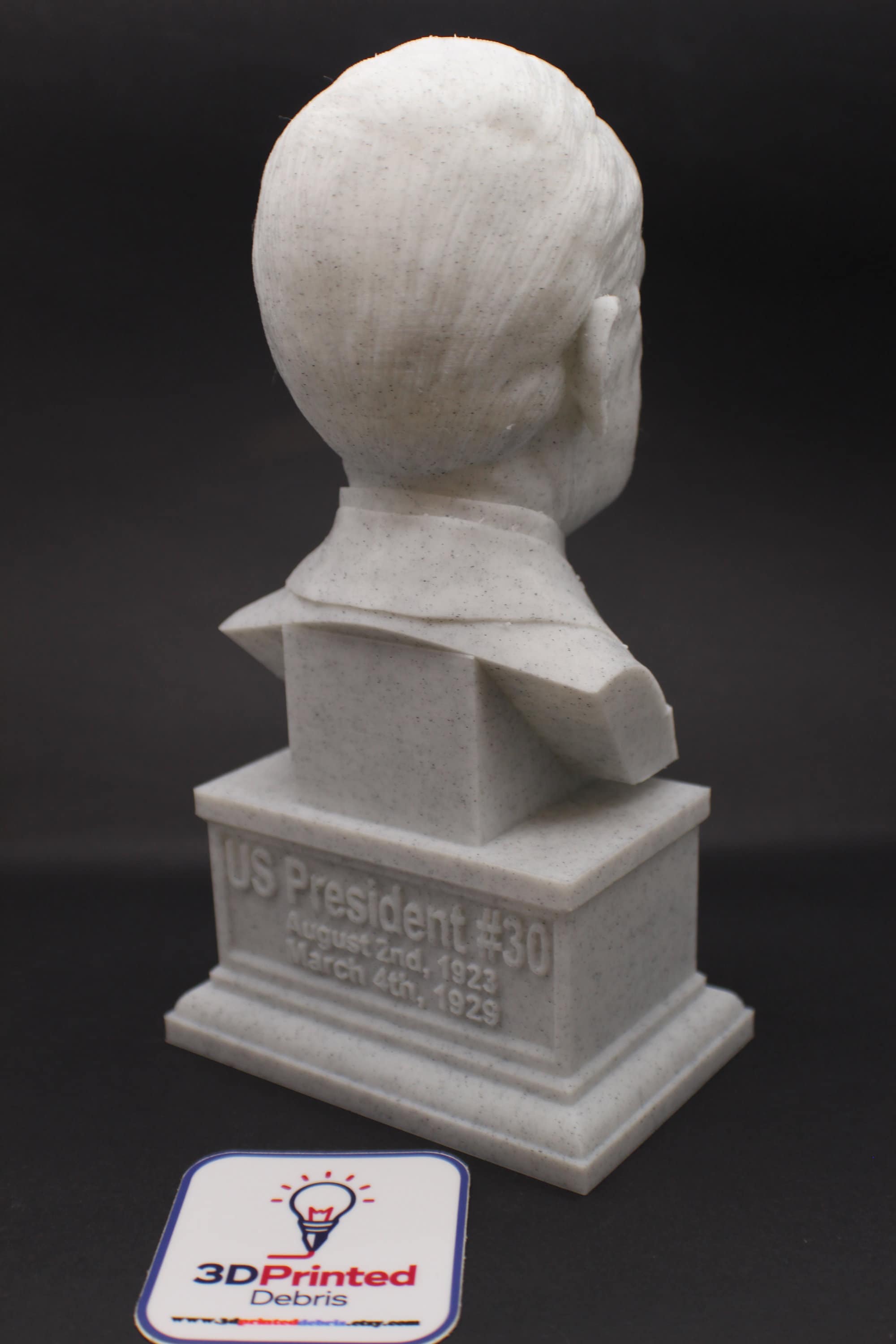 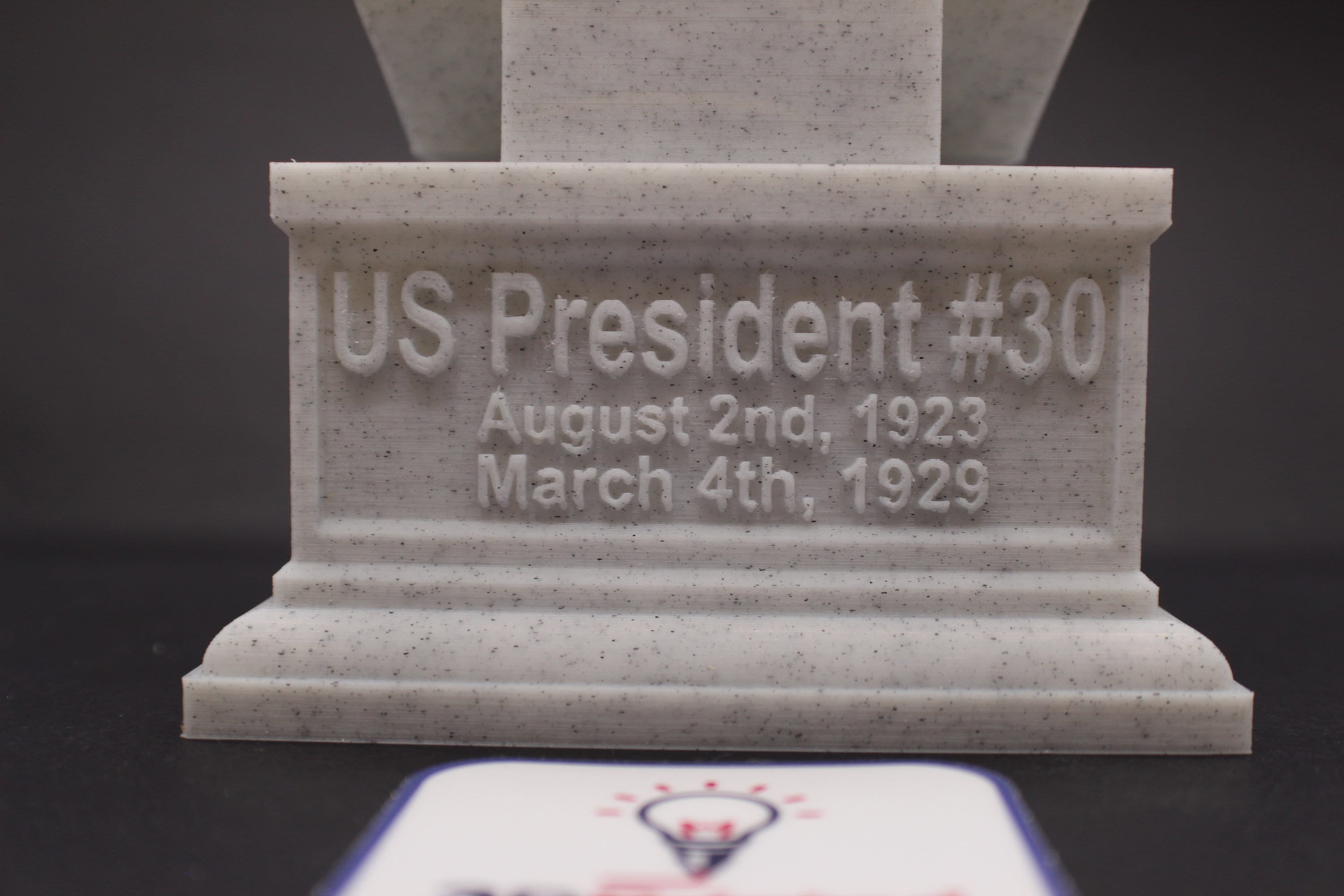 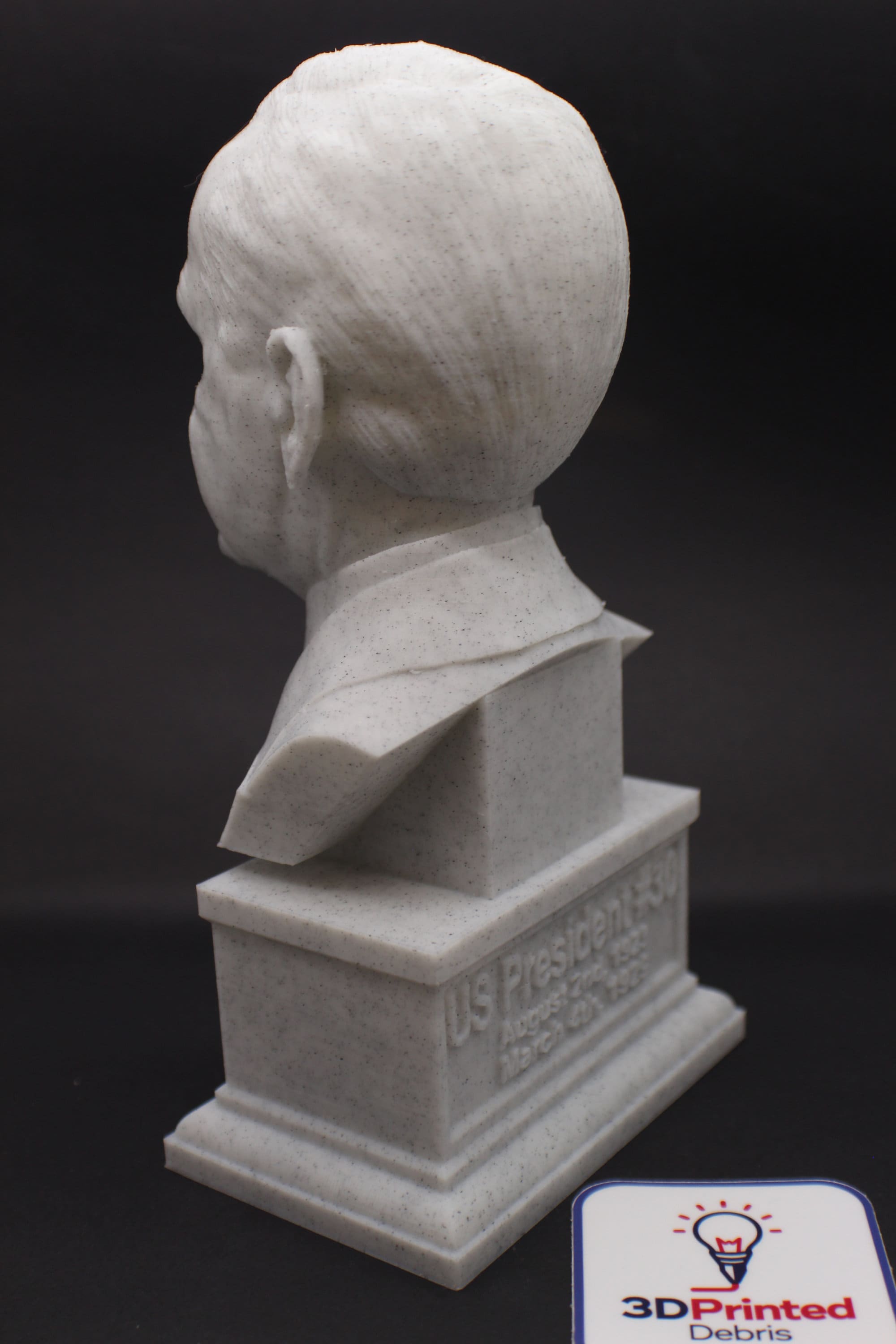 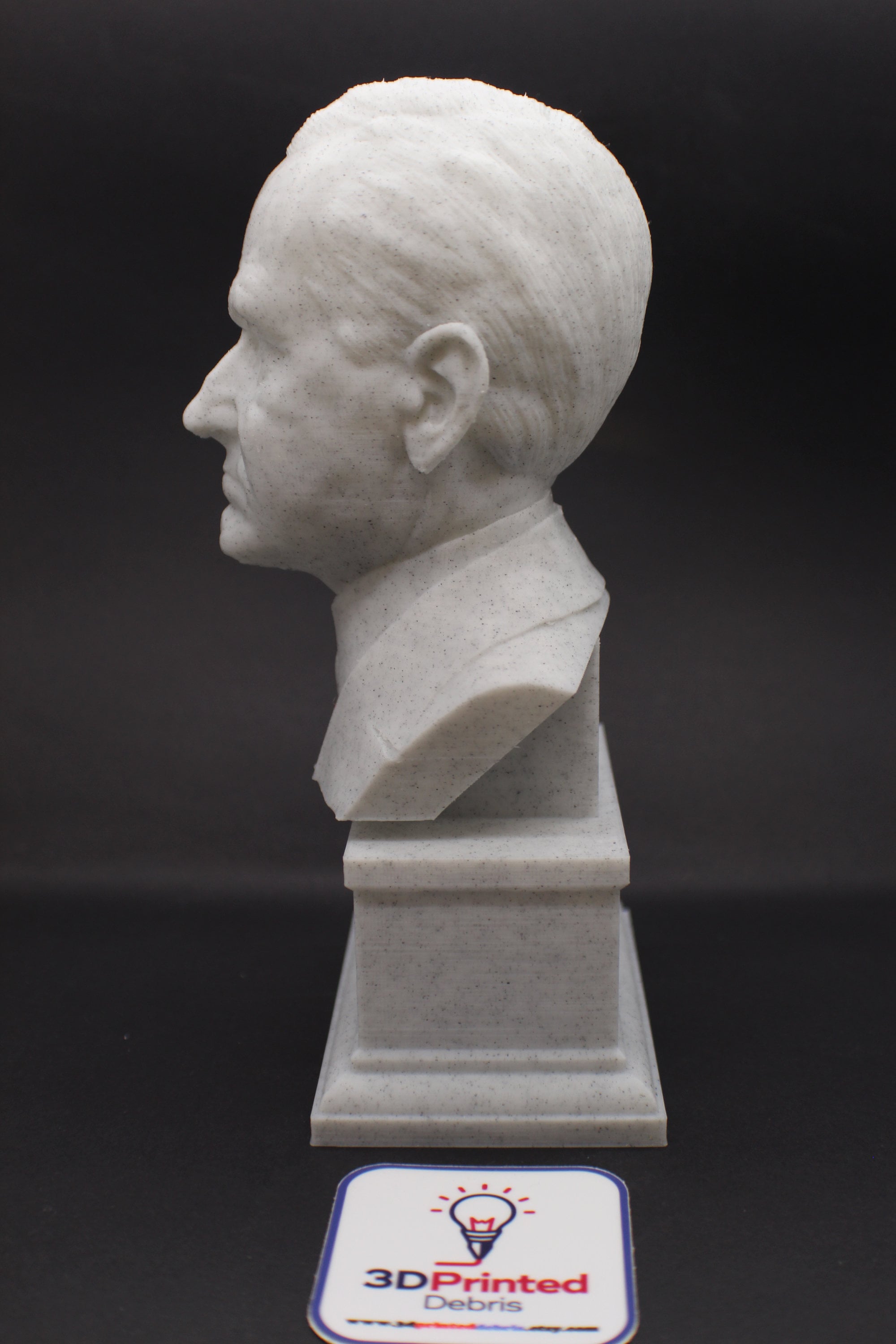 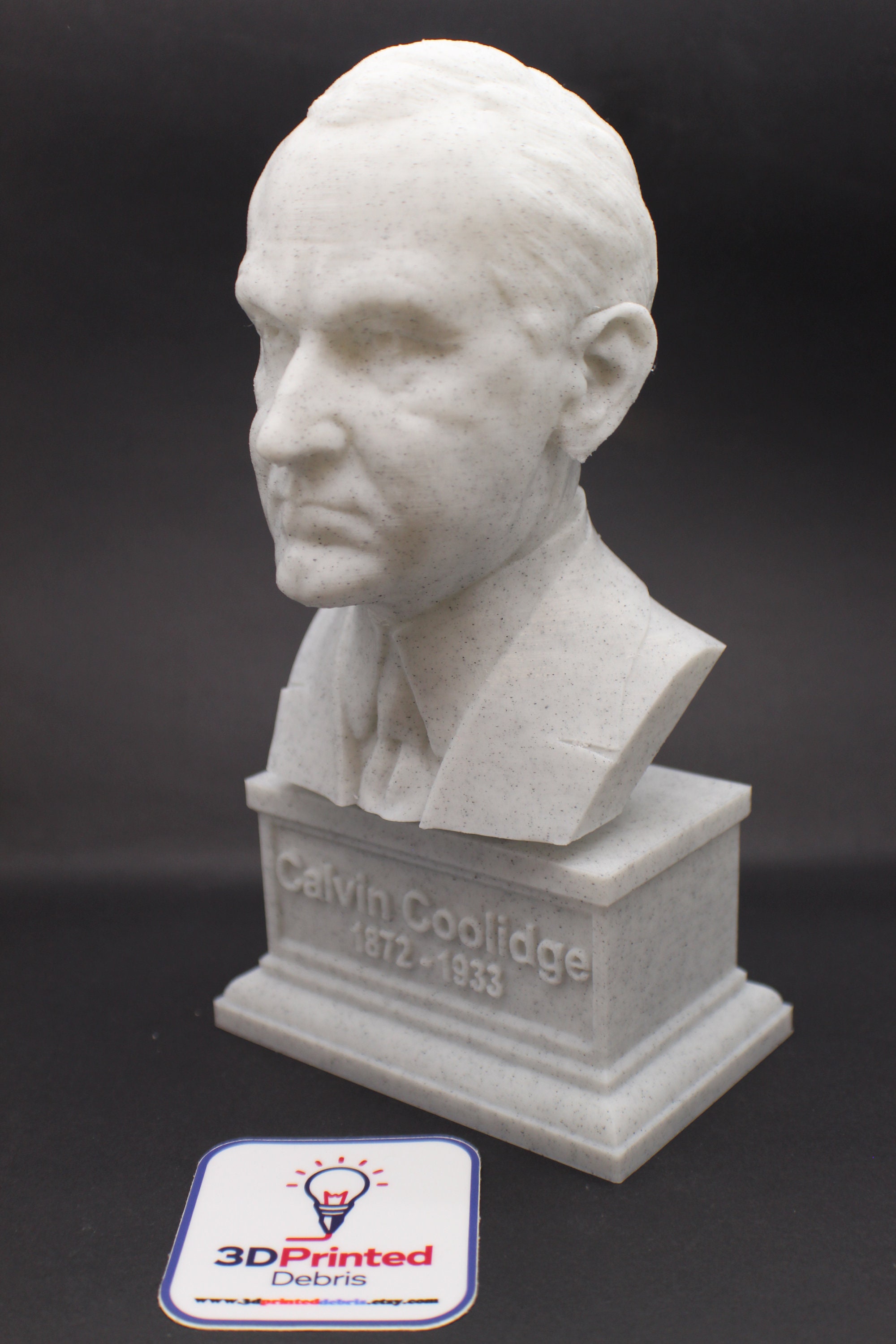 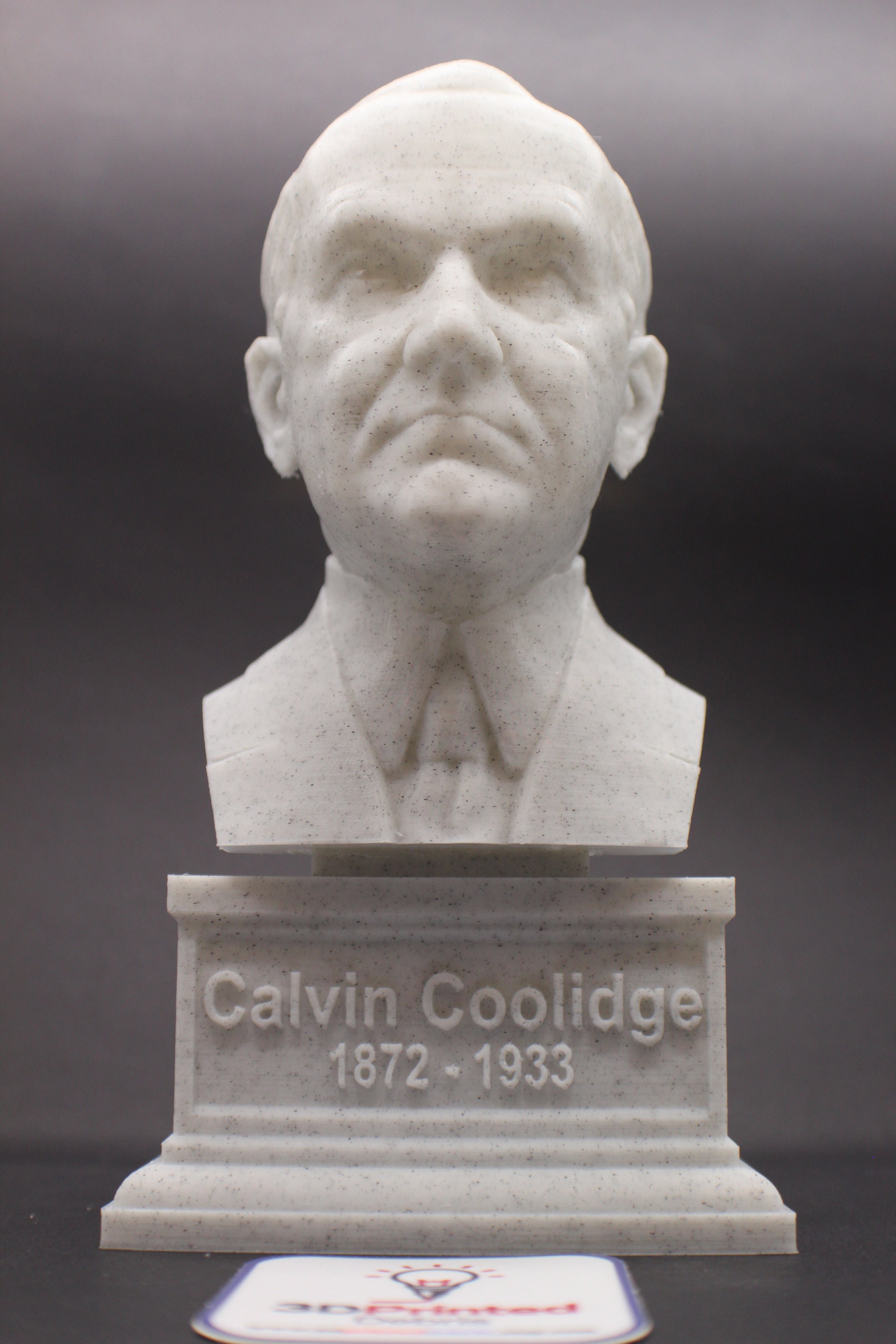 This 3D printed bust of Calvin Coolidge, the thirtieth United States President. This one is printed in a marble PLA, giving it a realistic stone look and a surprise whenever someone picks it up to discover it's actual weight. It is more durable than alabaster or plaster, and is washable with lukewarm soapy water for easy spring cleaning. It comes on a custom plinth that has his lifetime on the front, and his dates in office as president on the back.

On August 2, 1923, President Harding died unexpectedly in San Francisco while on a speaking tour of the western United States. Vice President Coolidge was in Vermont visiting his family home, which had neither electricity nor a telephone, when he received word by messenger of Harding's death. The new president dressed, said a prayer, and came downstairs to greet the reporters who had assembled. His father, a notary public and justice of the peace, administered the oath of office in the family's parlor by the light of a kerosene lamp at 2:47 a.m. on August 3, 1923; President Coolidge then went back to bed.

Coolidge returned to Washington the next day, and was sworn in again by Justice Adolph A. Hoehling Jr. of the Supreme Court of the District of Columbia, to forestall any questions about the authority of a state official to administer a federal oath. This second oath-taking remained a secret until it was revealed by Harry M. Daugherty in 1932, and confirmed by Hoehling. When Hoehling confirmed Daugherty's story, he indicated that Daugherty, then serving as United States Attorney General, asked him to administer the oath without fanfare at the Willard Hotel. According to Hoehling, he did not question Daugherty's reason for requesting a second oath-taking but assumed it was to resolve any doubt about whether the first swearing-in was valid.

President Coolidge signing appropriation bills for the Veterans Bureau on the South Lawn during the garden party for wounded veterans, June 5, 1924. General John J. Pershing is at left. The man at right, looking on, appears to be Veterans Bureau Director Frank T. Hines.
The nation initially did not know what to make of Coolidge, who had maintained a low profile in the Harding administration; many had even expected him to be replaced on the ballot in 1924. Coolidge believed that those of Harding's men under suspicion were entitled to every presumption of innocence, taking a methodical approach to the scandals, principally the Teapot Dome scandal, while others clamored for rapid punishment of those they presumed guilty. Coolidge thought the Senate investigations of the scandals would suffice; this was affirmed by the resulting resignations of those involved. He personally intervened in demanding the resignation of Attorney General Harry M. Daugherty after he refused to cooperate with the congressional probe. He then set about to confirm that no loose ends remained in the administration, arranging for a full briefing on the wrongdoing. Harry A. Slattery reviewed the facts with him, Harlan F. Stone analyzed the legal aspects for him and Senator William E. Borah assessed and presented the political factors.

Coolidge addressed Congress when it reconvened on December 6, 1923, giving a speech that supported many of Harding's policies, including Harding's formal budgeting process, the enforcement of immigration restrictions and arbitration of coal strikes ongoing in Pennsylvania. Coolidge's speech was the first presidential speech to be broadcast over the radio. The Washington Naval Treaty was proclaimed just one month into Coolidge's term, and was generally well received in the country. In May 1924, the World War I veterans' World War Adjusted Compensation Act or "Bonus Bill" was passed over his veto. Coolidge signed the Immigration Act later that year, which was aimed at restricting southern and eastern European immigration, but appended a signing statement expressing his unhappiness with the bill's specific exclusion of Japanese immigrants. Just before the Republican Convention began, Coolidge signed into law the Revenue Act of 1924, which reduced the top marginal tax rate from 58% to 46%, as well as personal income tax rates across the board, increased the estate tax and bolstered it with a new gift tax.