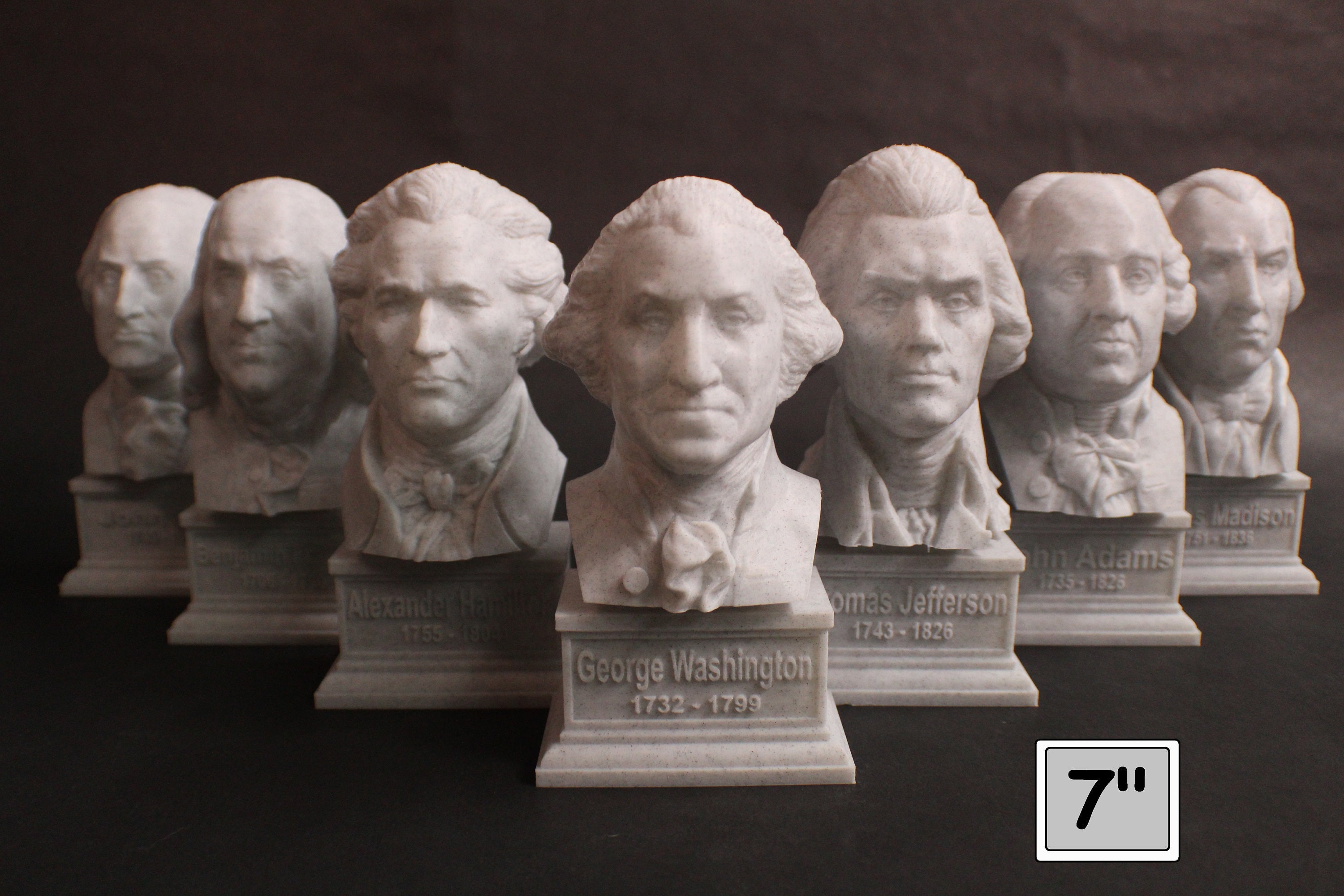 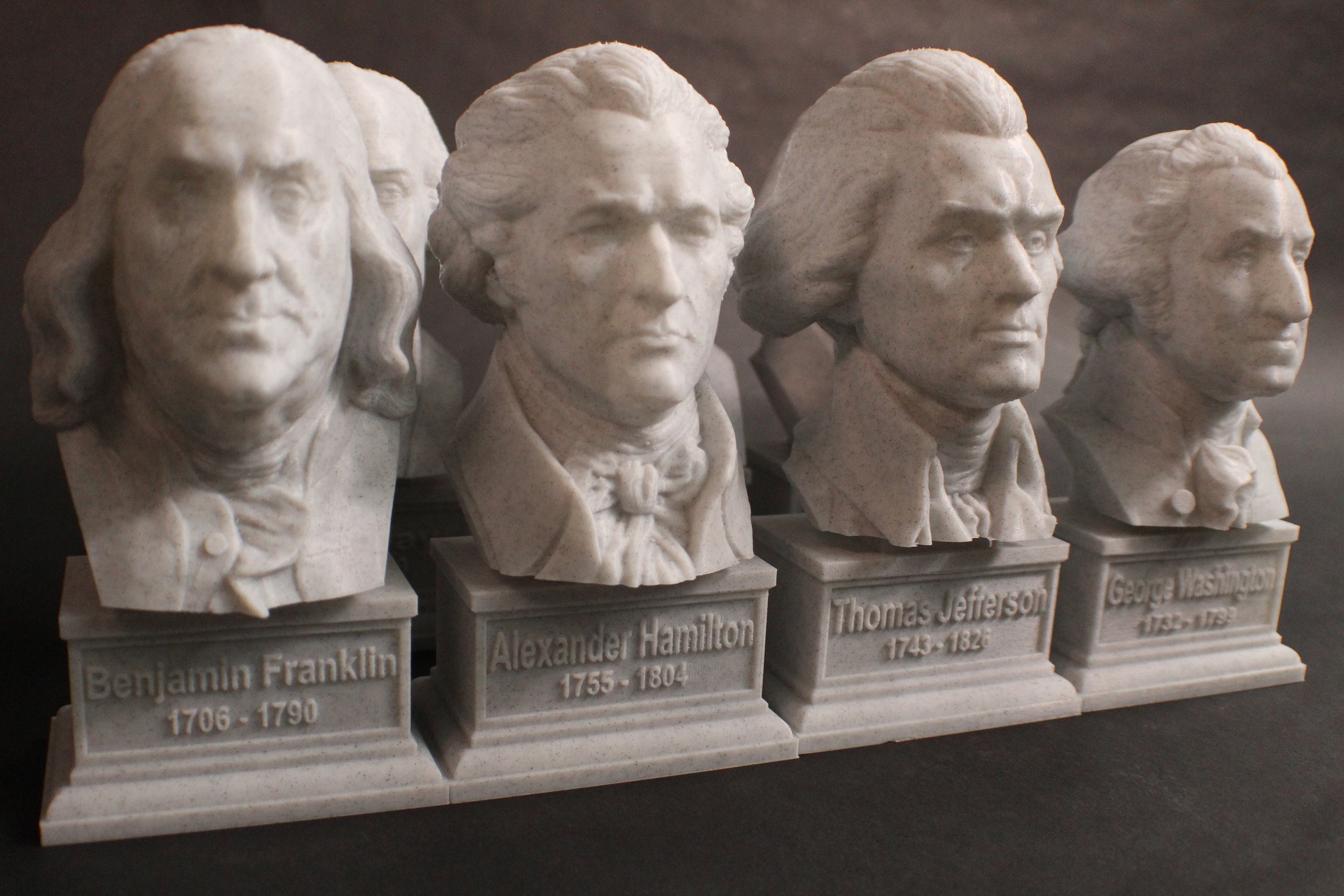 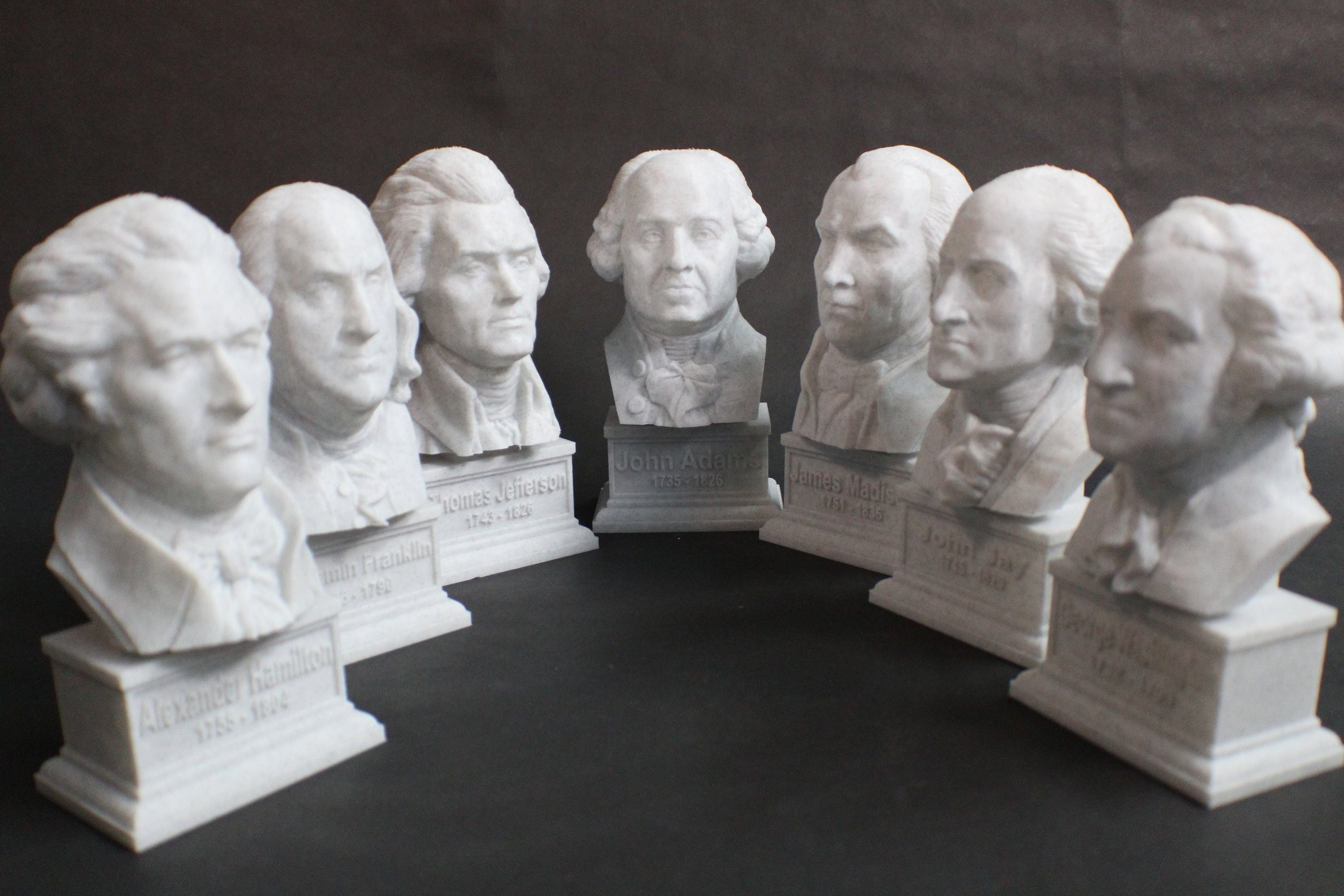 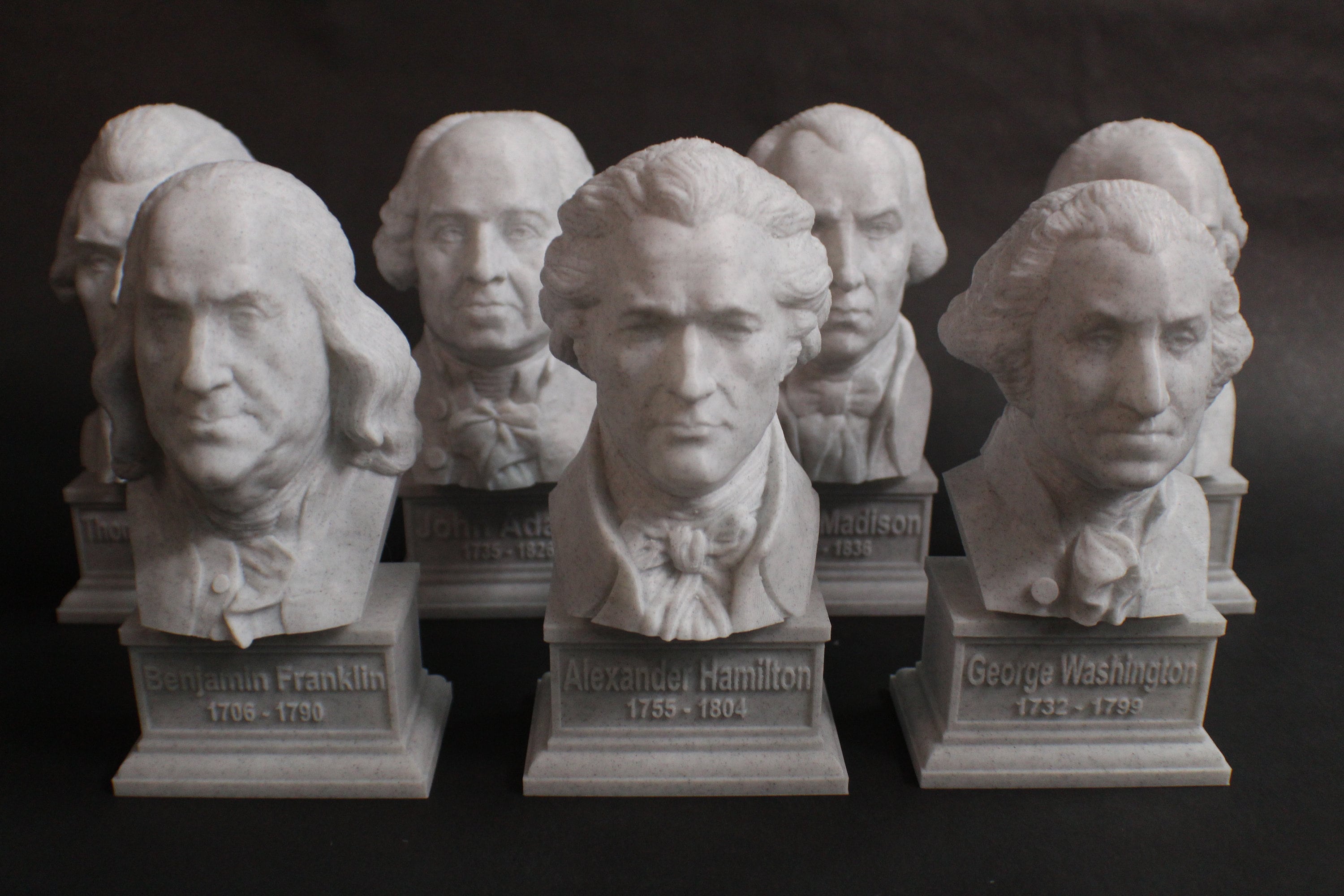 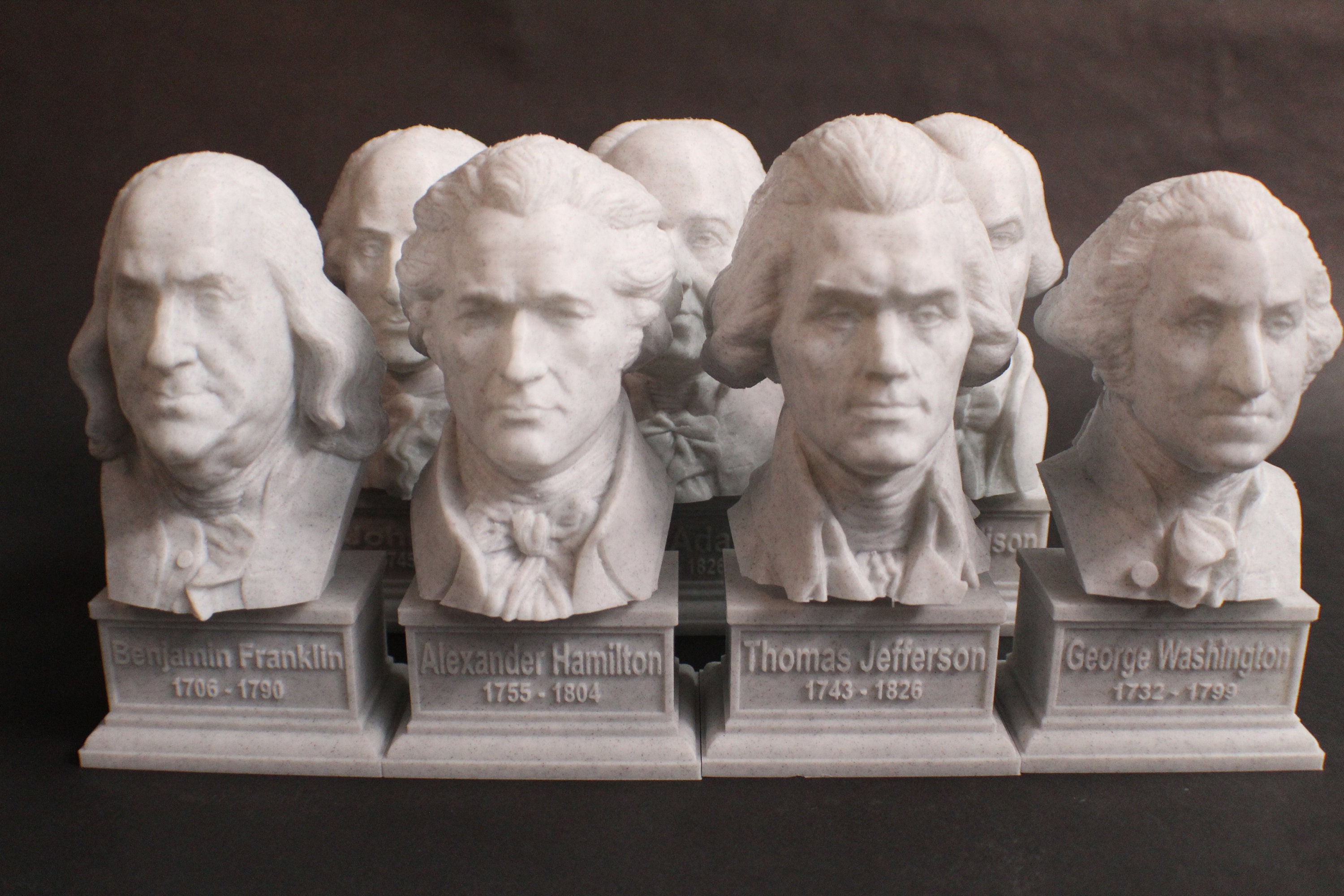 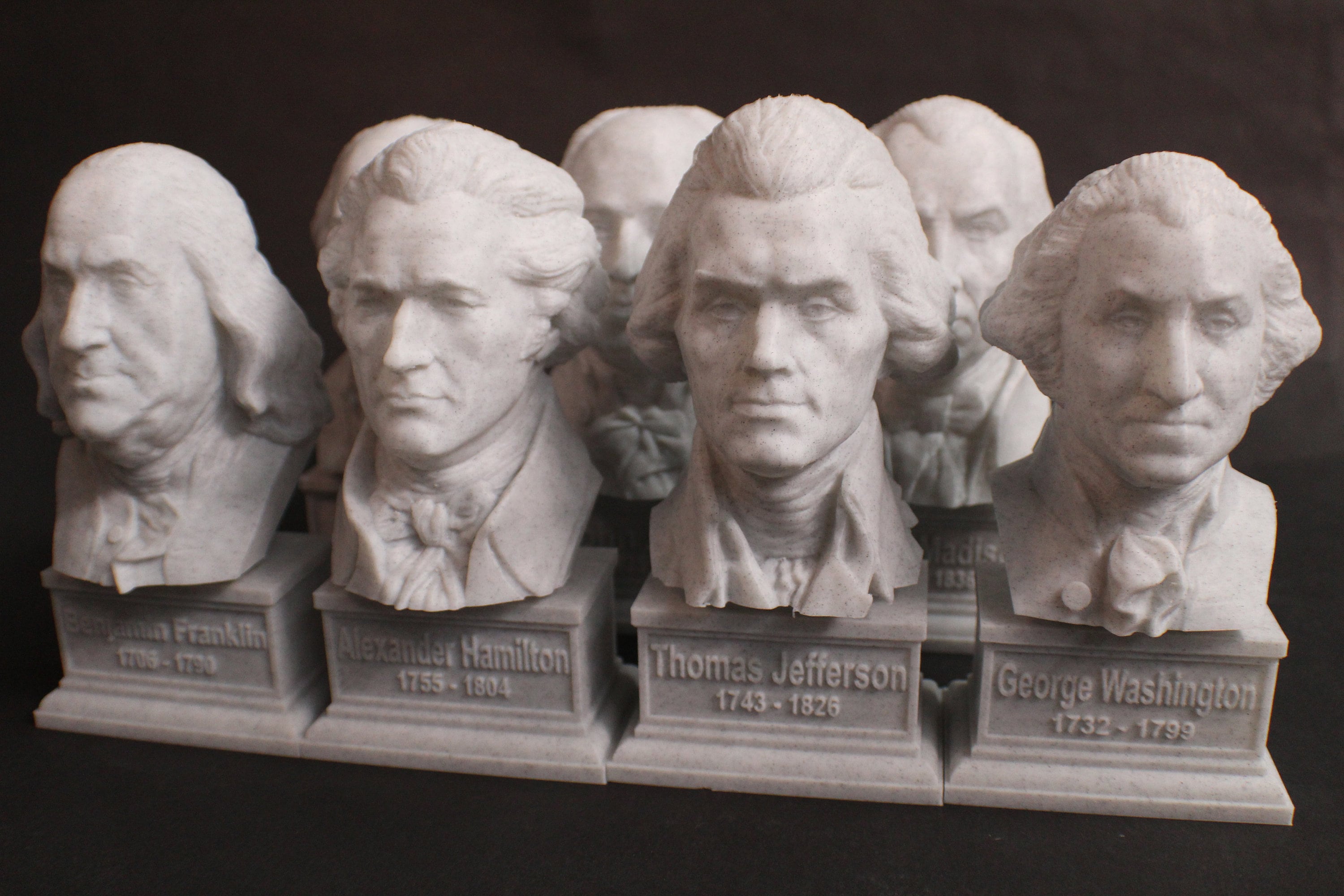 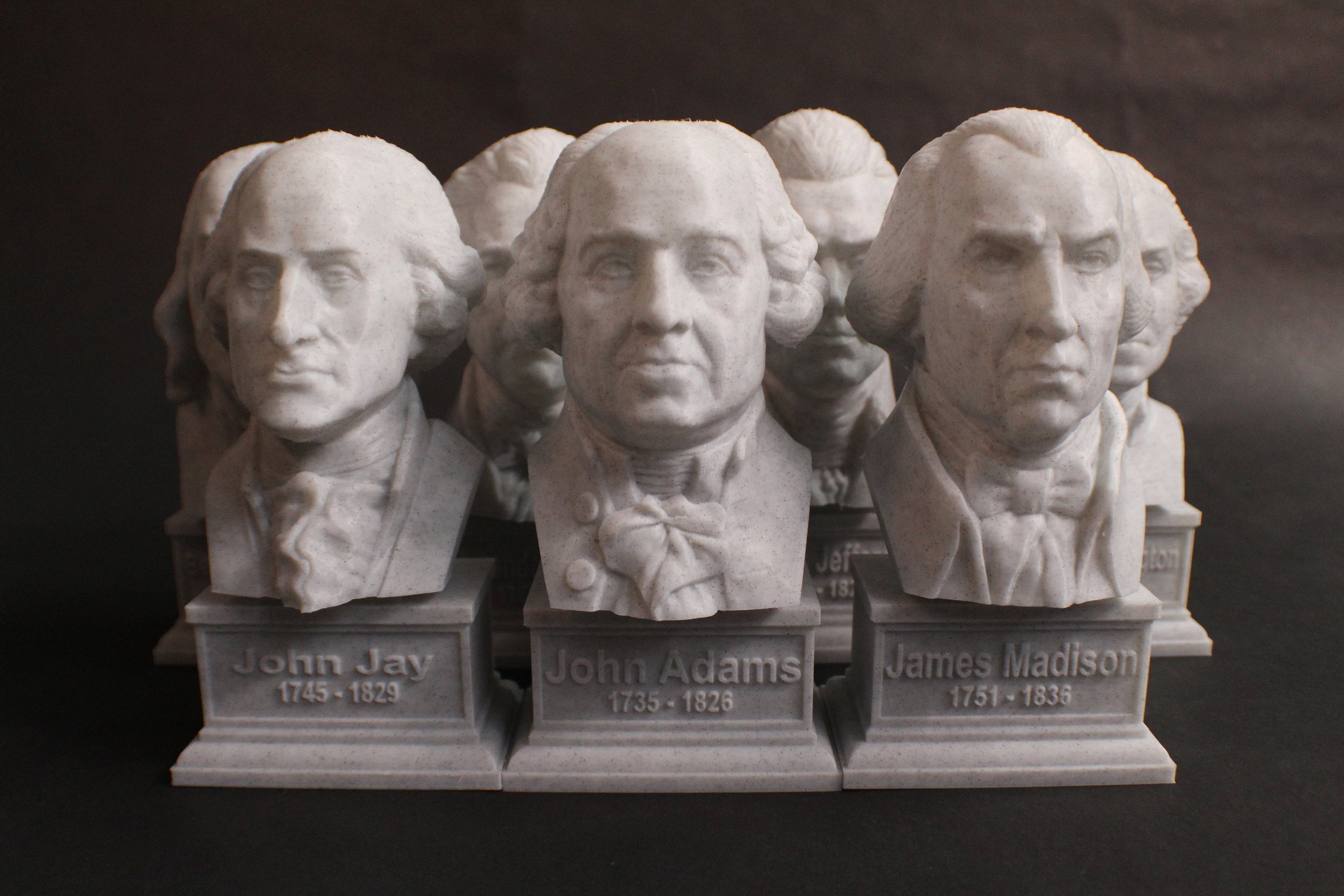 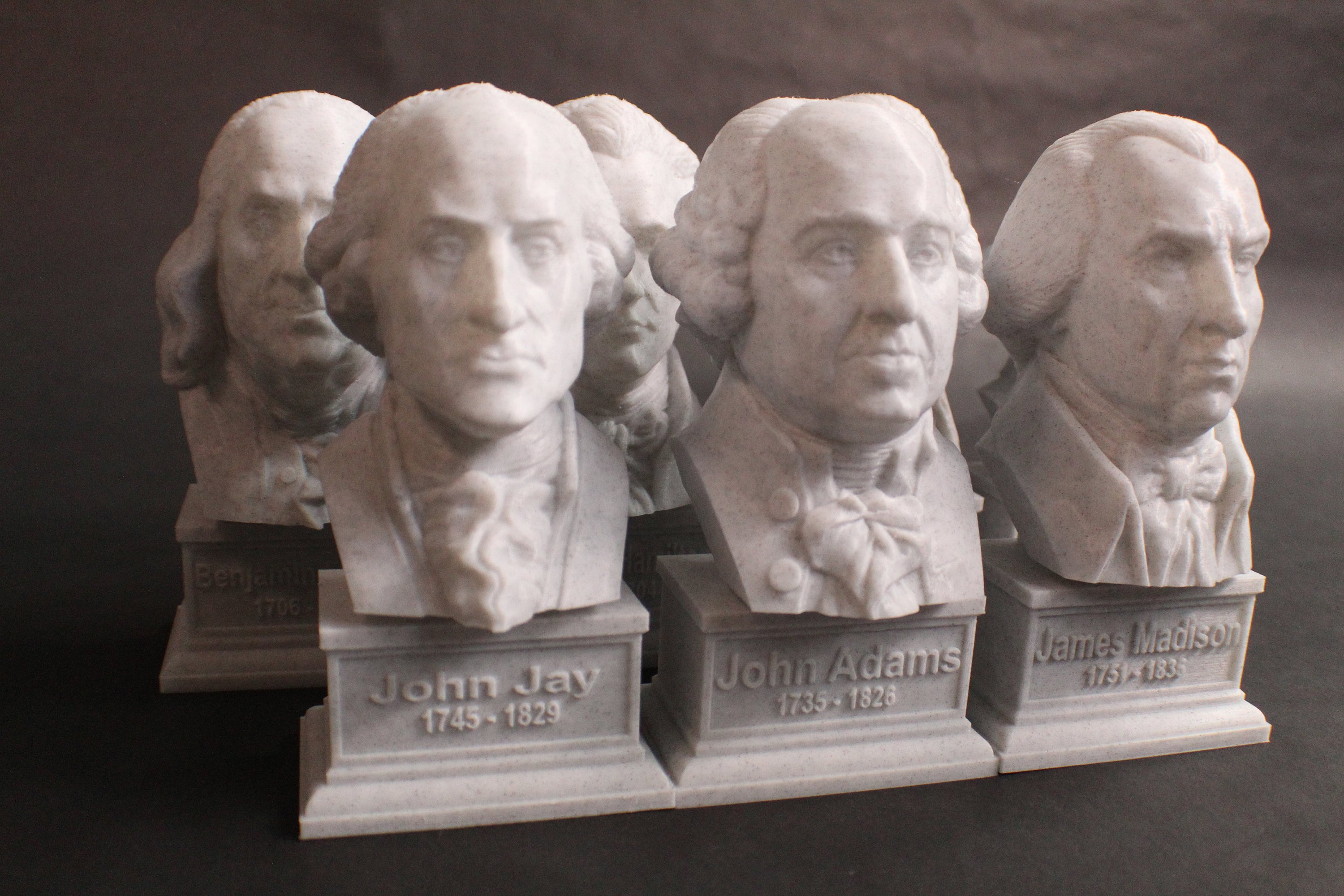 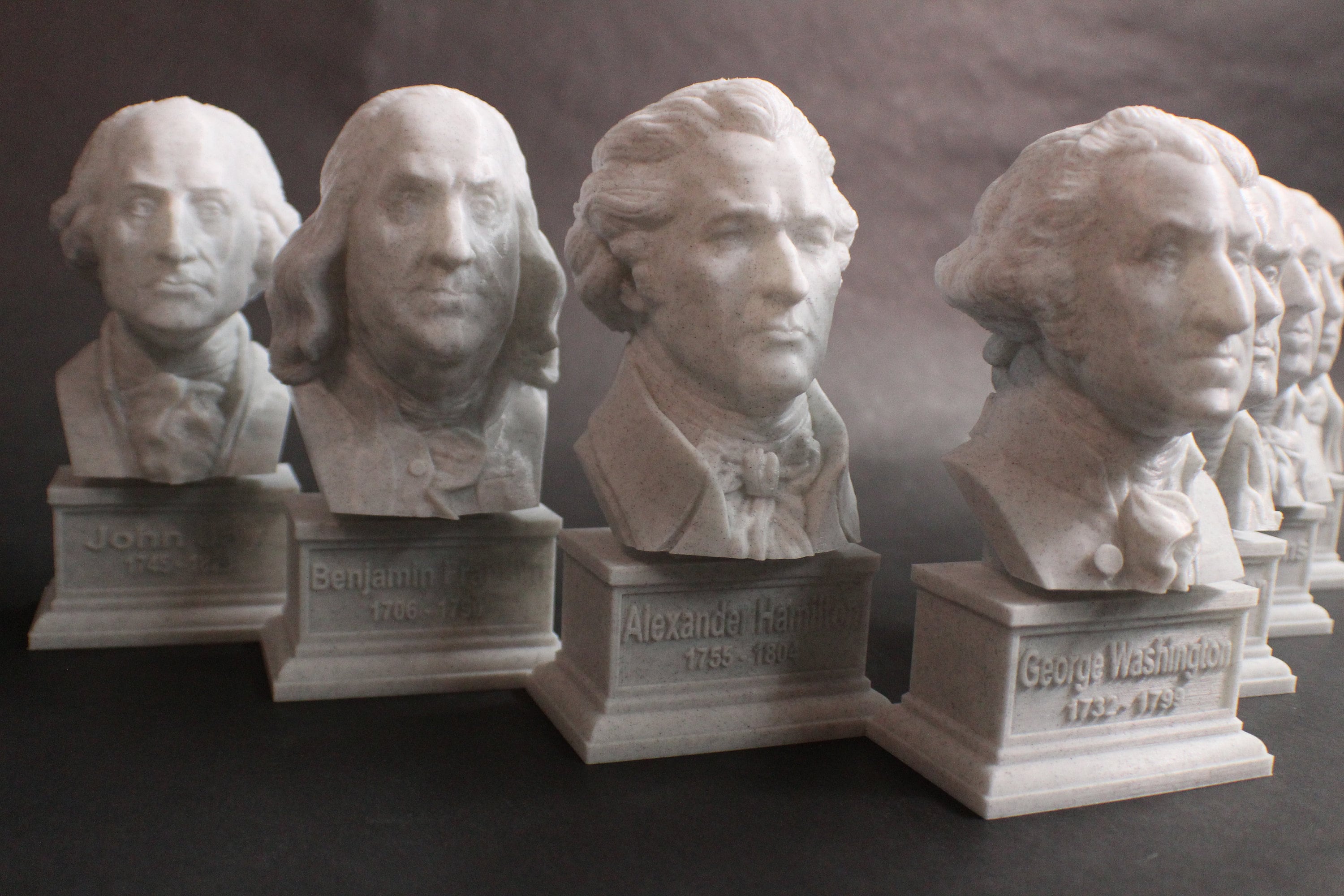 This is collection of 3D printed busts of the Founding Fathers of the United States. These are printed in a marble PLA, giving it a detailed look and a surprise whenever someone picks it up to discover it's actual weight. It is more durable than alabaster or plaster, and is washable with lukewarm soapy water for easy spring cleaning. They come on custom plinths that have their names on the front.

They each stand 7 inches tall, about 3.5 inches wide, and 4 inches deep. You will receive all 7 of the busts in the color of your choosing:

The Founding Fathers of the United States led the American Revolution against the Kingdom of Great Britain. Most were descendants of colonists settled in the Thirteen Colonies in North America.

Historian Richard B. Morris in 1973 identified the following seven figures as the key Founding Fathers: Alexander Hamilton, John Adams, Benjamin Franklin, John Jay, Thomas Jefferson, James Madison, and George Washington. Adams, Jefferson, and Franklin were members of the Committee of Five that drafted the Declaration of Independence. Hamilton, Madison, and Jay were authors of The Federalist Papers, advocating ratification of the Constitution. The constitutions drafted by Jay and Adams for their respective states of New York (1777) and Massachusetts (1780) were heavily relied upon when creating language for the US Constitution. Jay, Adams and Franklin negotiated the Treaty of Paris (1783) that would end the American Revolutionary War. Washington was Commander-in-Chief of the Continental Army and was President of the Constitutional Convention. All held additional important roles in the early government of the United States, with Washington, Adams, Jefferson, and Madison serving as President. Jay was the nation's first Chief Justice, Hamilton was the first Secretary of the Treasury, and Franklin was America's most senior diplomat, and later the governmental leader of Pennsylvania.

The term Founding Fathers is sometimes used to refer to the Signers of the embossed version of the Declaration of Independence in 1776. Signers should not be confused with the term Framers; the Framers are defined by the National Archives as those 55 individuals who were appointed to be delegates to the 1787 Constitutional Convention and took part in drafting the proposed Constitution of the United States. Of the 55 Framers, only 39 were signers of the Constitution. Two further groupings of Founding Fathers include: 1) those who signed the Continental Association, a trade ban and one of the colonists' first collective volleys protesting British control and the Intolerable Acts in 1774 or 2) those who signed the Articles of Confederation, the first U.S. constitutional document.

The phrase "Founding Fathers" is a 20th-century appellation, coined by Warren G. Harding in 1916. Prior to, and during the 19th century, they were referred to as simply the "Fathers". The term has been used to describe the founders and first settlers of the original royal colonies.