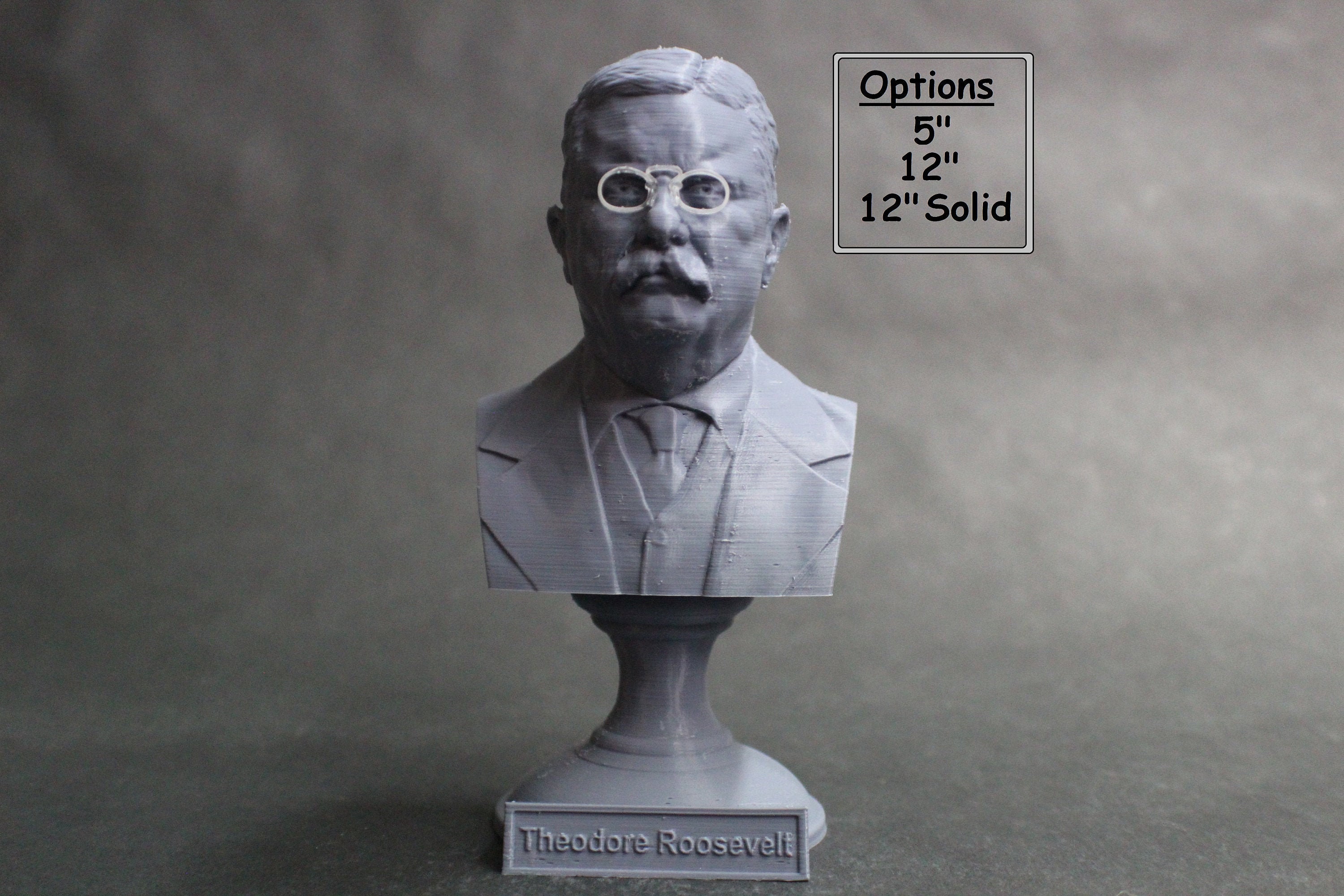 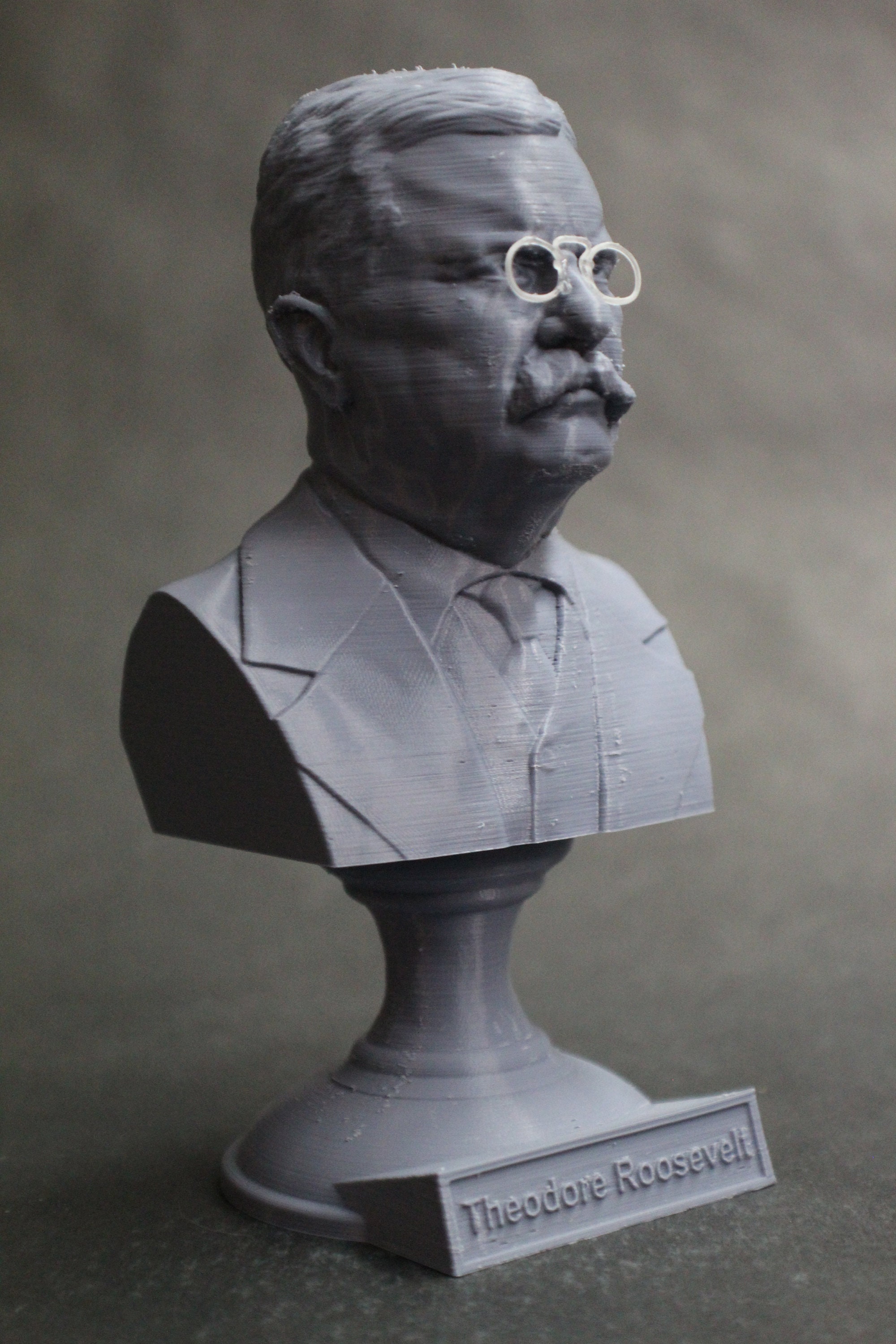 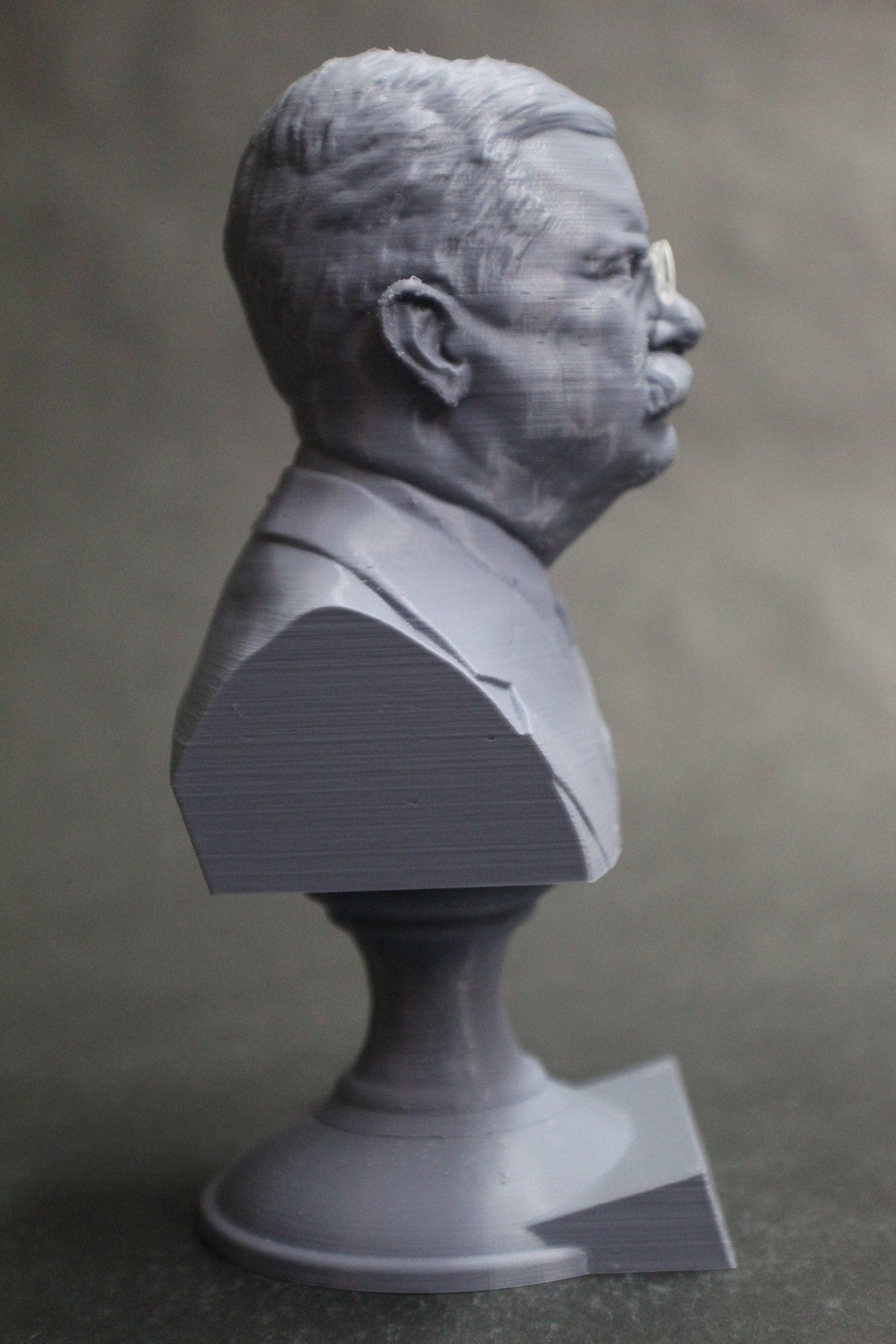 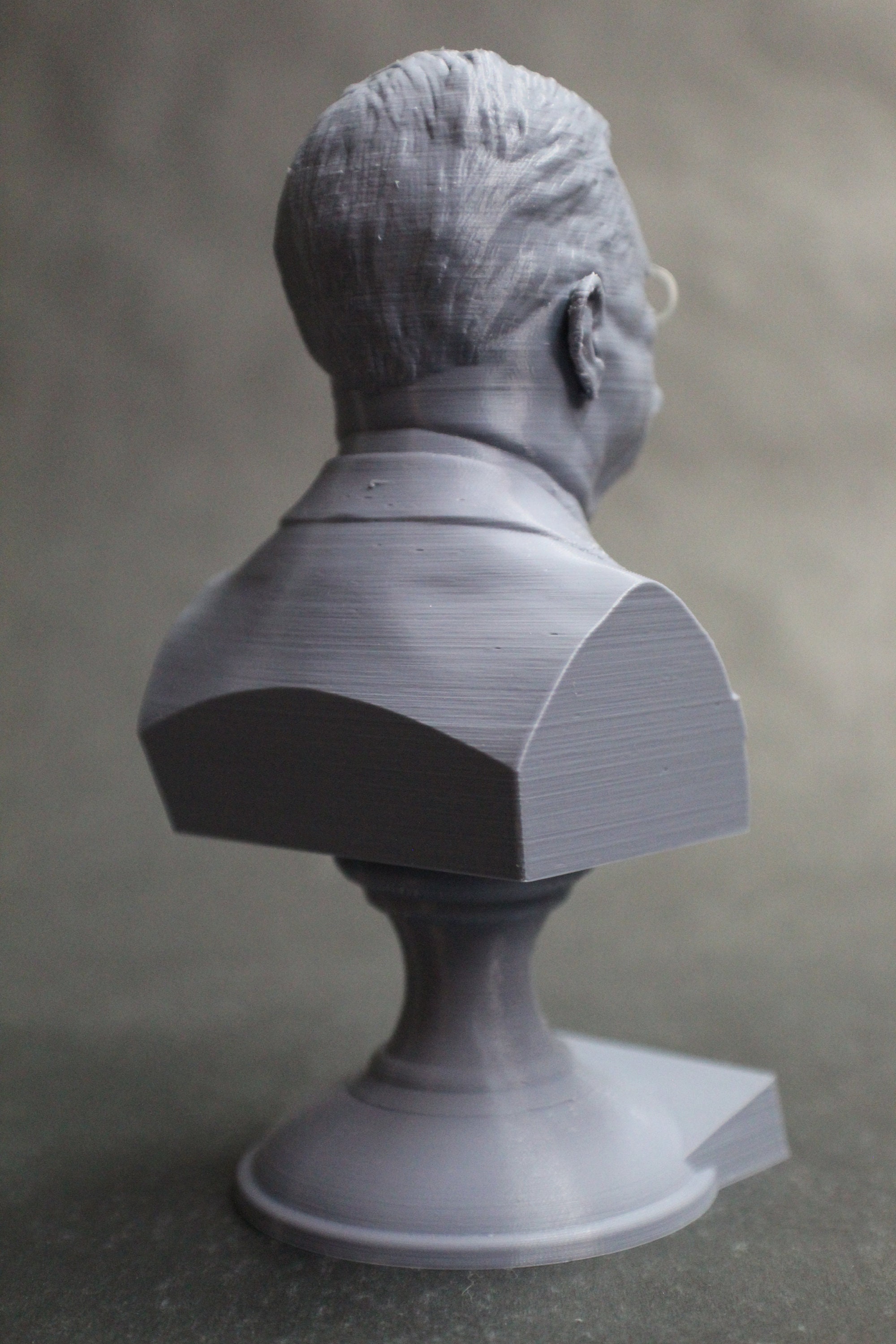 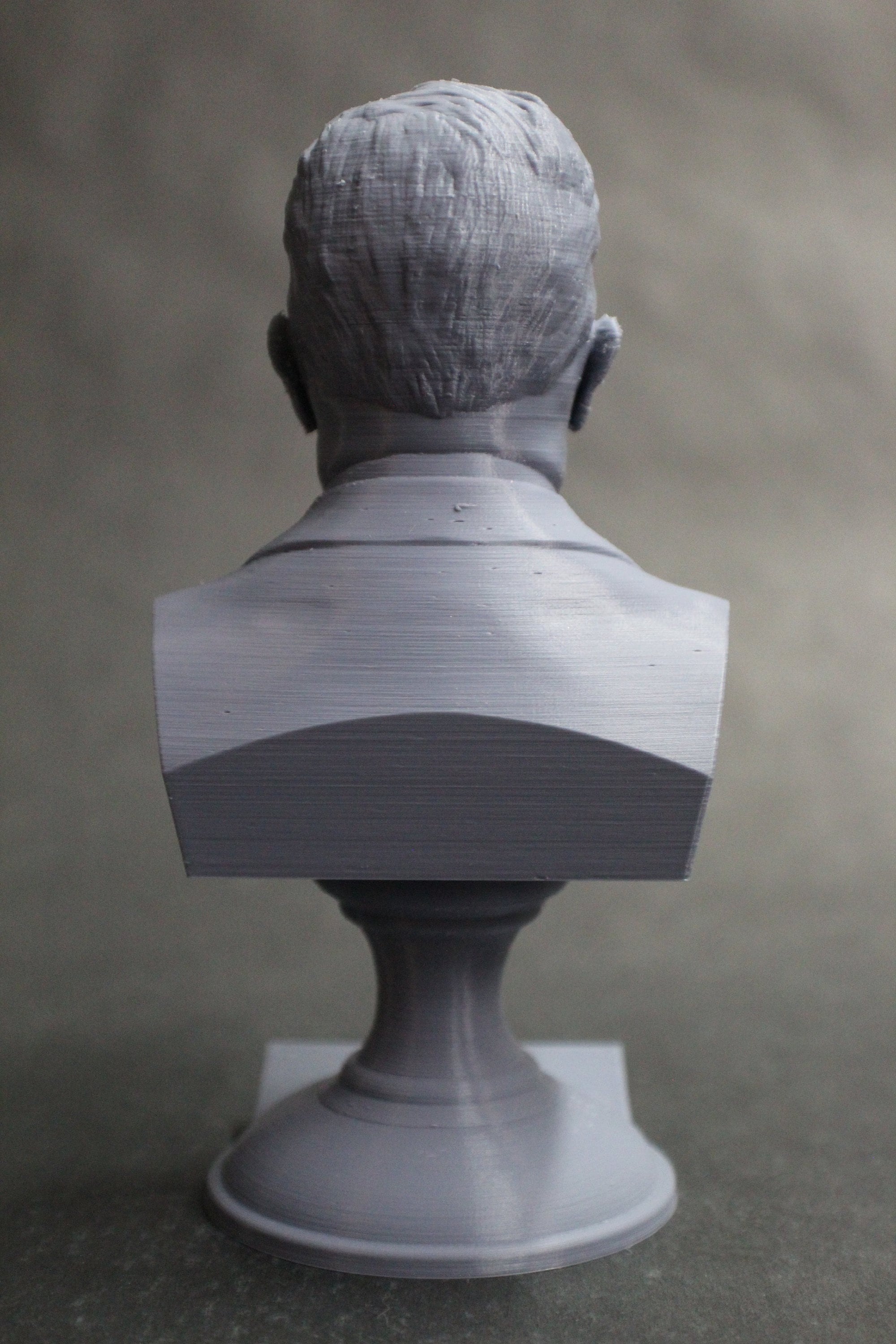 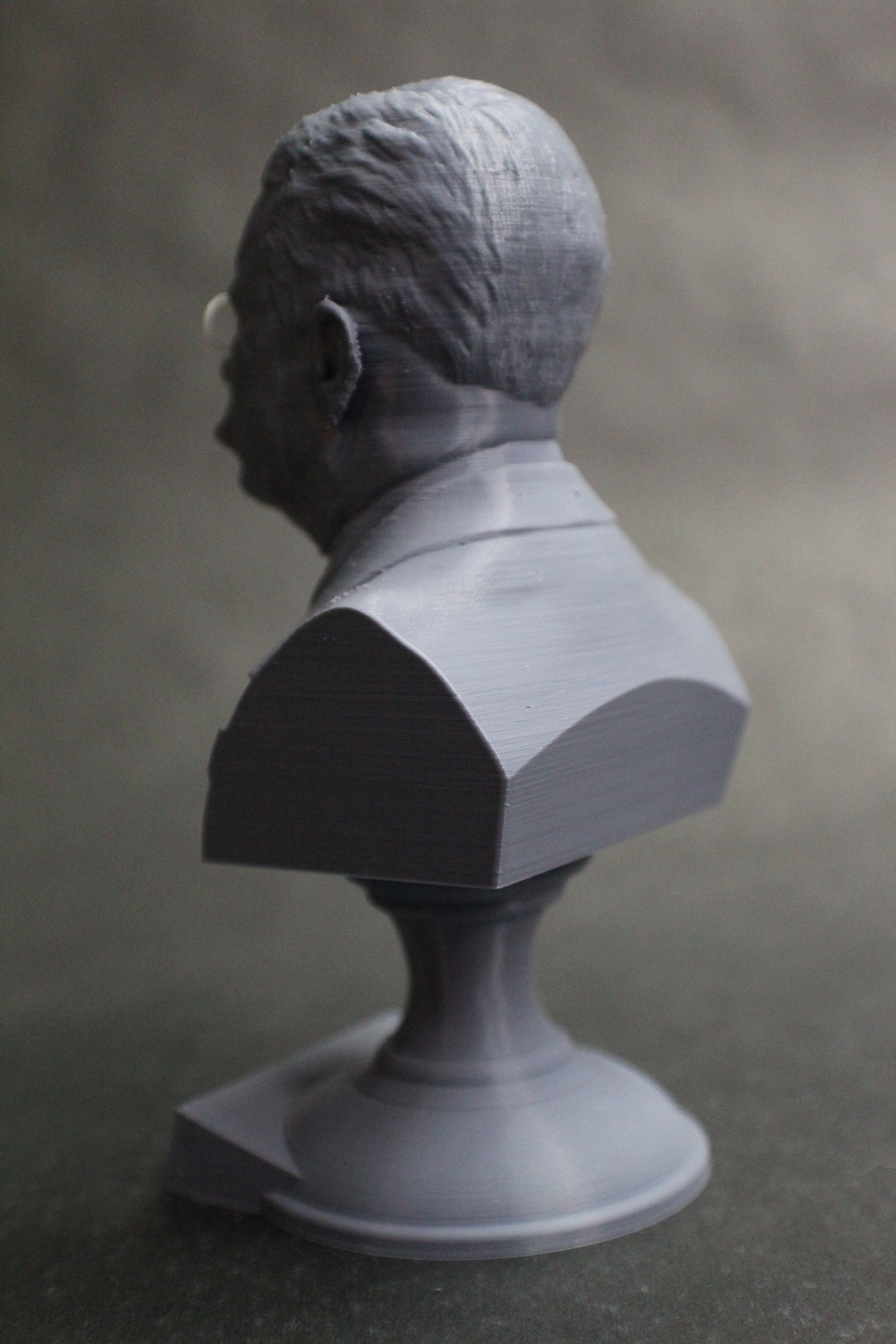 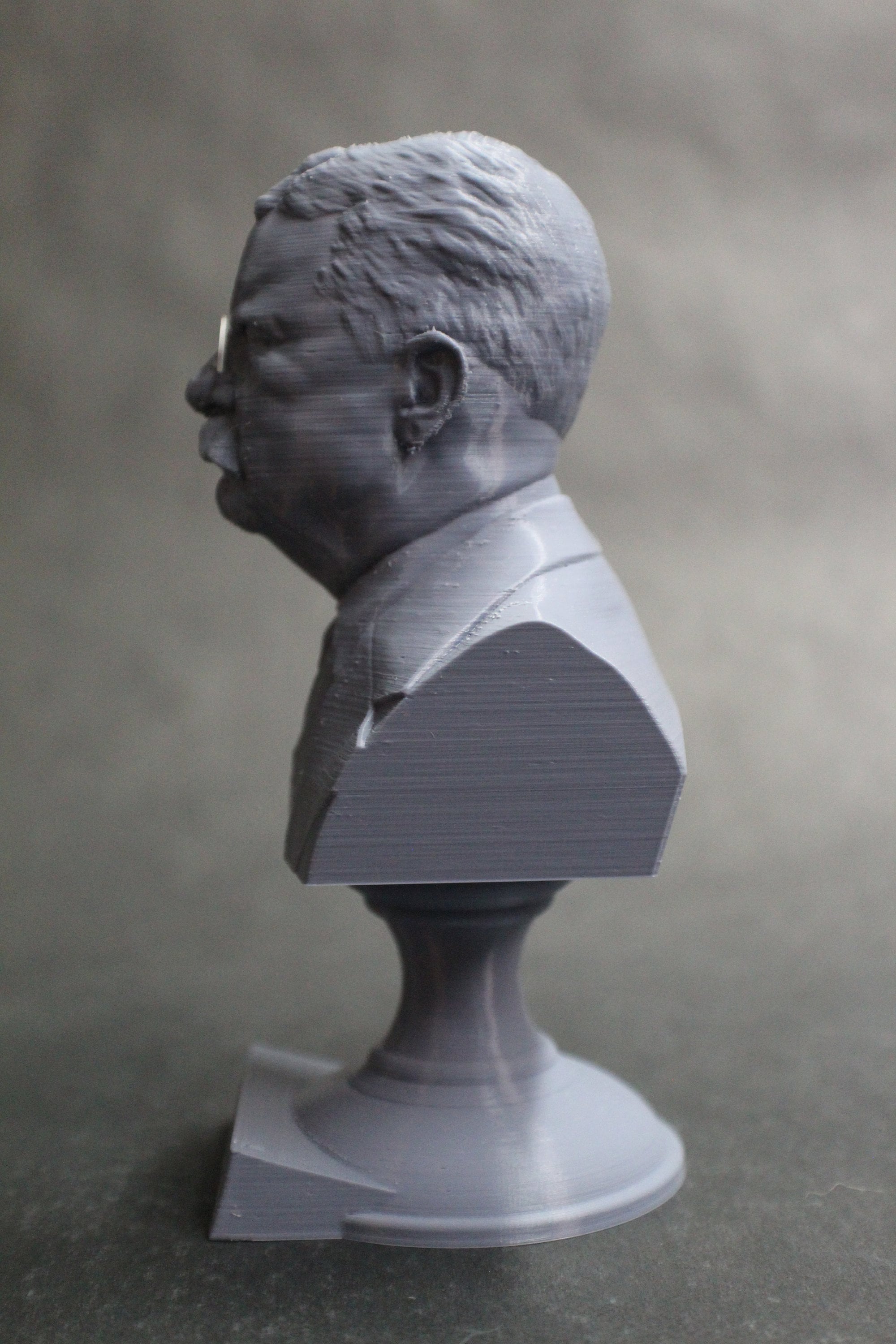 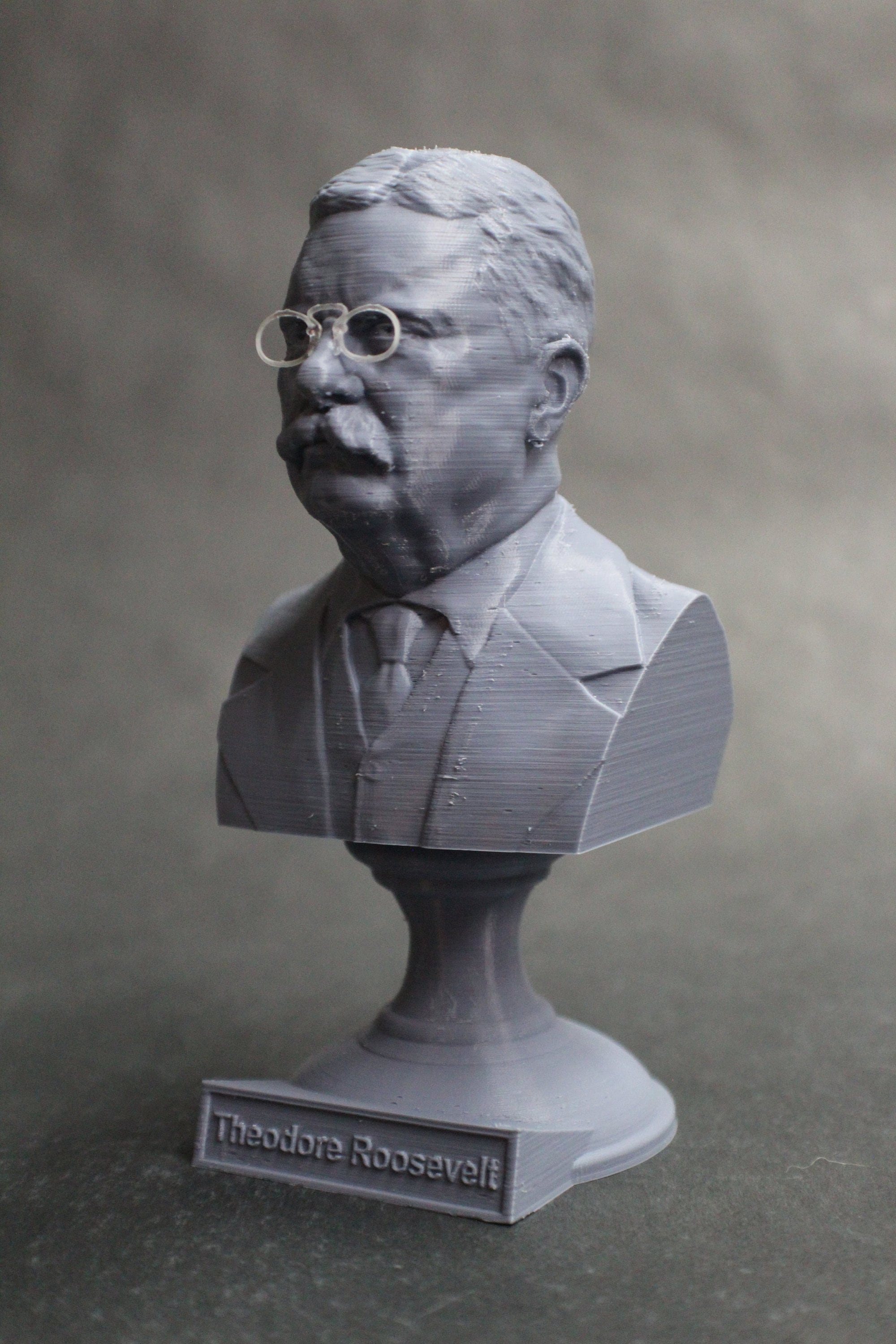 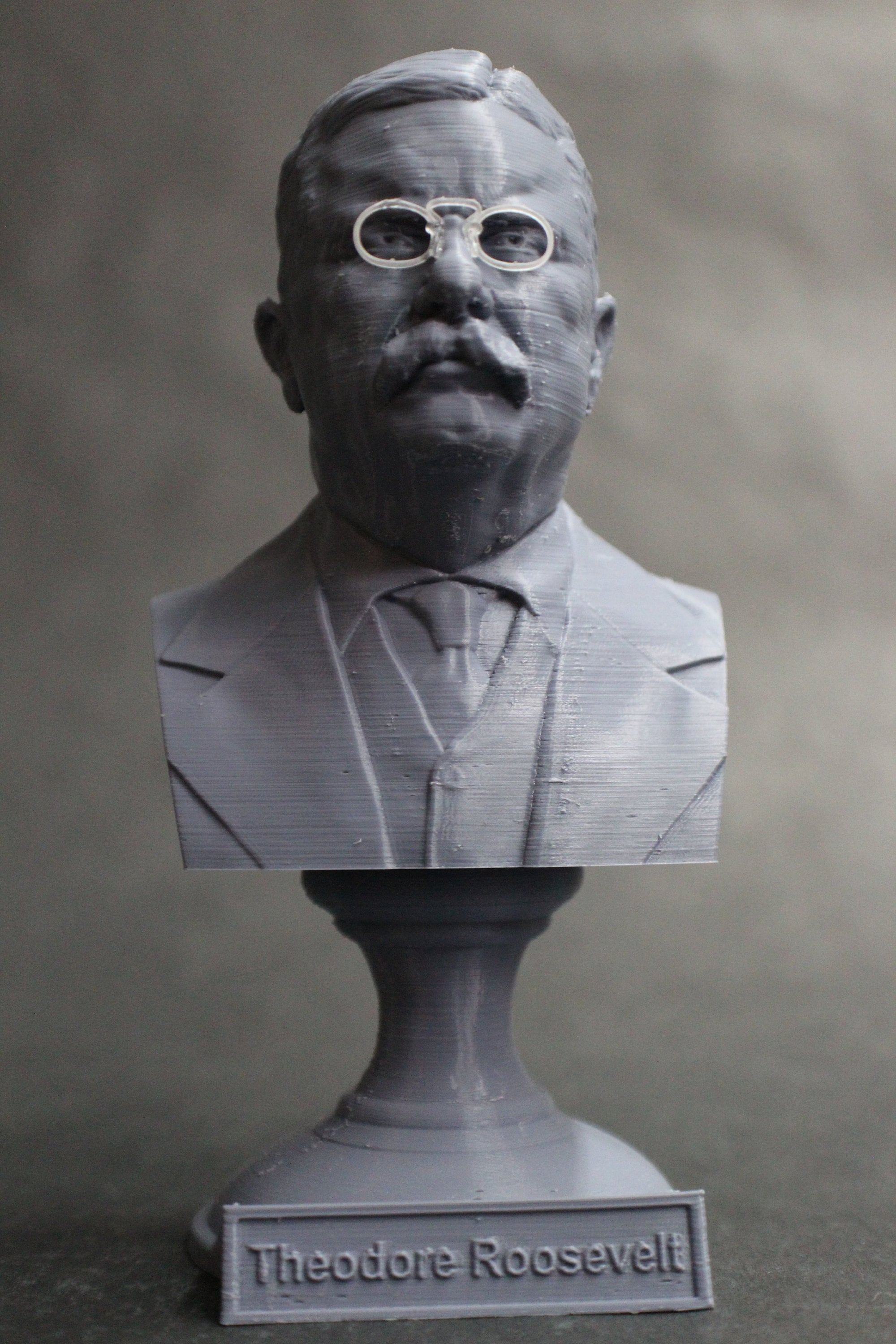 This 3D printed bust of Theodore "Teddy" Roosevelt, the twenty-sixth United States President. This one is printed in a gray PLA, giving it a detailed look and a surprise whenever someone picks it up to discover it's actual weight. His glasses are laser printed in SLA resin. It is more durable than alabaster or plaster, and is washable with lukewarm soapy water for easy spring cleaning. It comes on a custom plinth that has his name on the front.

Theodore Roosevelt Jr. (October 27, 1858 – January 6, 1919) was an American statesman, sportsman, conservationist and writer who served as the 26th president of the United States from 1901 to 1909. He previously served as the 25th vice president of the United States from March to September 1901 and as the 33rd governor of New York from 1899 to 1900. As a leader of the Republican Party during this time, he became a driving force for the Progressive Era in the United States in the early 20th century. His face is depicted on Mount Rushmore, alongside those of George Washington, Thomas Jefferson, and Abraham Lincoln. In polls of historians and political scientists, Roosevelt is generally ranked as one of the five best presidents.

Roosevelt was born a sickly child with debilitating asthma, but he overcame his physical health problems by embracing a strenuous lifestyle. He integrated his exuberant personality, vast range of interests, and world-famous achievements into a "cowboy" persona defined by robust masculinity. Home-schooled, he began a lifelong naturalist avocation before attending Harvard College. His book, The Naval War of 1812 (1882), established his reputation as both a learned historian and as a popular writer. Upon entering politics, he became the leader of the reform faction of Republicans in New York's state legislature. Following the near-simultaneous deaths of his wife and mother, he escaped to a cattle ranch in the Dakotas. Roosevelt served as Assistant Secretary of the Navy under President William McKinley, but resigned from that post to lead the Rough Riders during the Spanish–American War. Returning a war hero, he was elected Governor of New York in 1898. After the death of Vice President Garret Hobart, the New York state party leadership convinced McKinley to accept Roosevelt as his running mate in the 1900 election. Roosevelt campaigned vigorously, and the McKinley-Roosevelt ticket won a landslide victory based on a platform of peace, prosperity, and conservation.

After taking office as Vice President in March 1901, he became President at age 42 following McKinley's assassination that September, and remains the youngest person to become President of the United States. As a leader of the Progressive movement, he championed his "Square Deal" domestic policies, promising the average citizen fairness, breaking of trusts, regulation of railroads, and pure food and drugs. Making conservation a top priority, he established many new national parks, forests, and monuments intended to preserve the nation's natural resources. In foreign policy, he focused on Central America, where he began construction of the Panama Canal. He expanded the Navy and sent the Great White Fleet on a world tour to project the United States' naval power around the globe. His successful efforts to broker the end of the Russo-Japanese War won him the 1906 Nobel Peace Prize. He avoided controversial tariff and money issues. Elected in 1904 to a full term, Roosevelt continued to promote progressive policies, many of which were passed in Congress. Roosevelt successfully groomed his close friend, William Howard Taft, and Taft won the 1908 presidential election to succeed him.

I’ve been wanting a T. Roosevelt bust for so long and when I found this I had to go for it. Great price for amazing quality! This is in the marble color.