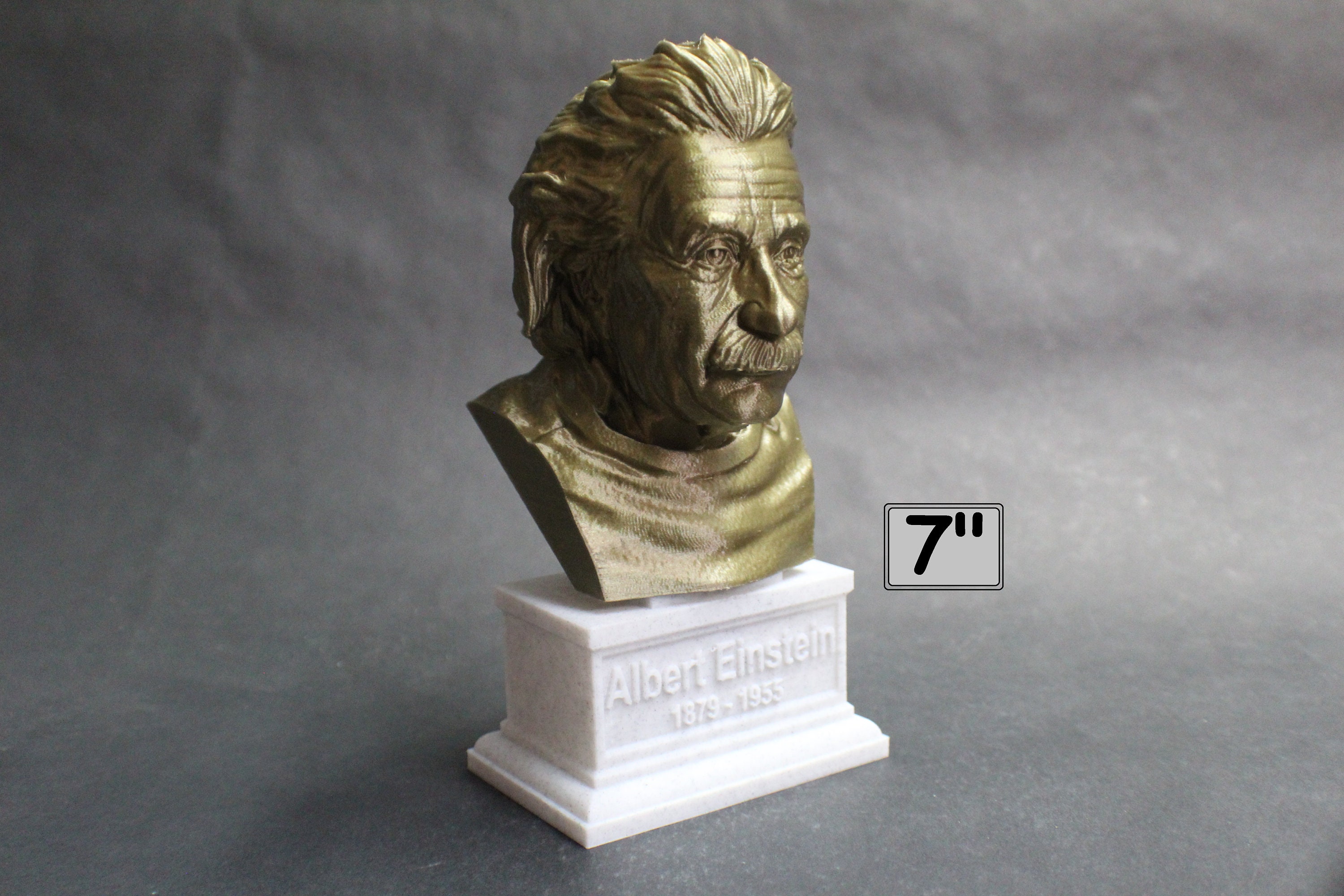 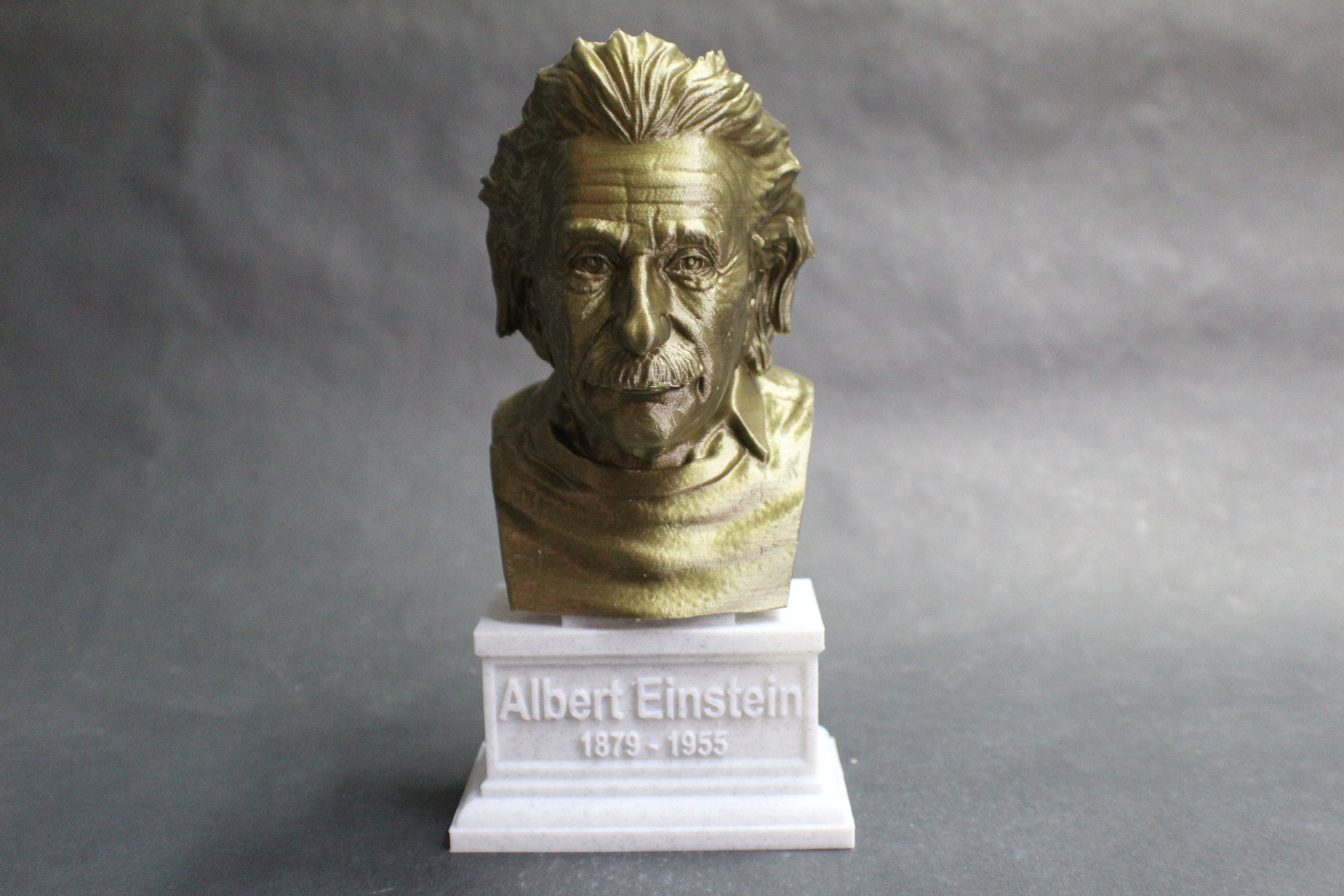 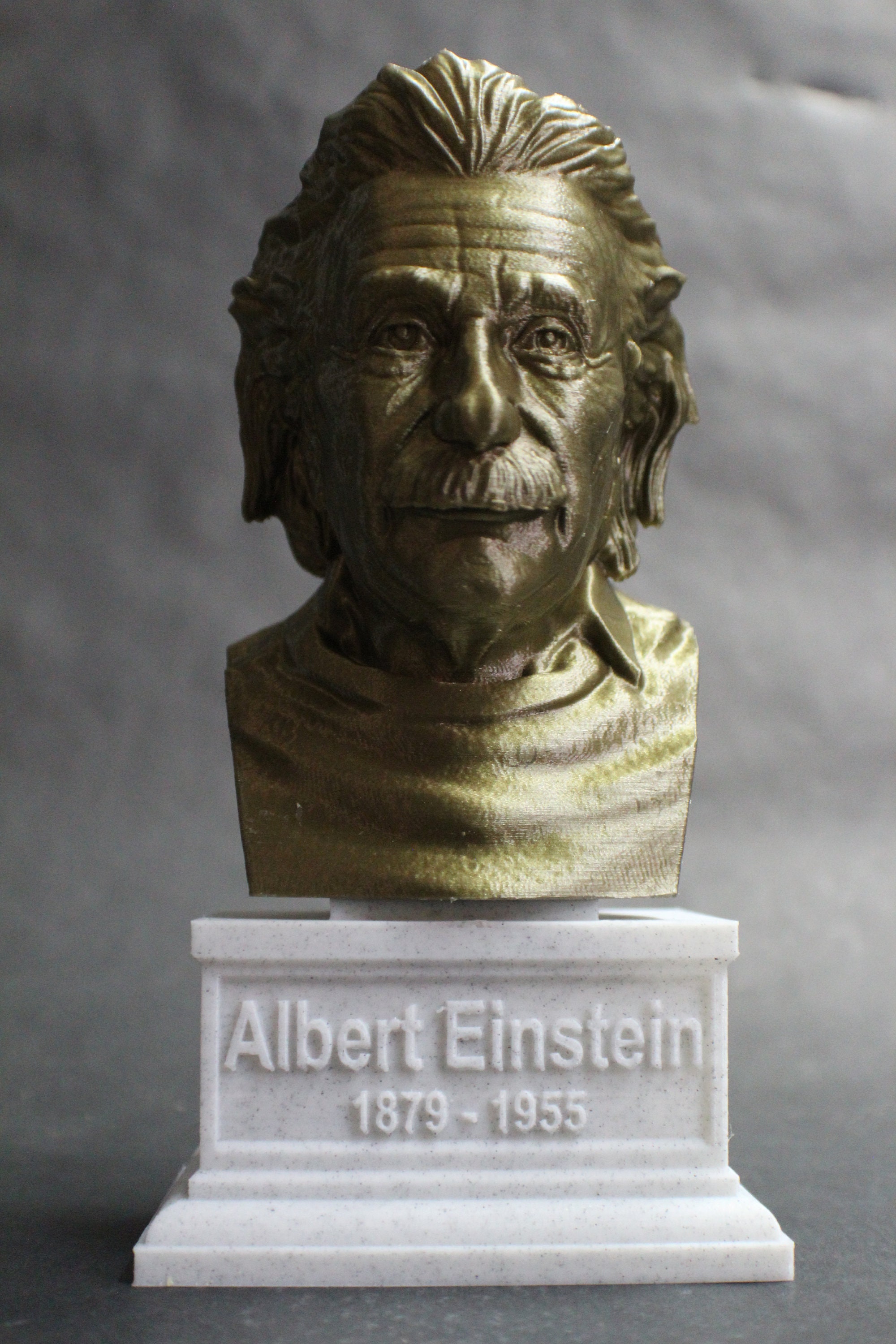 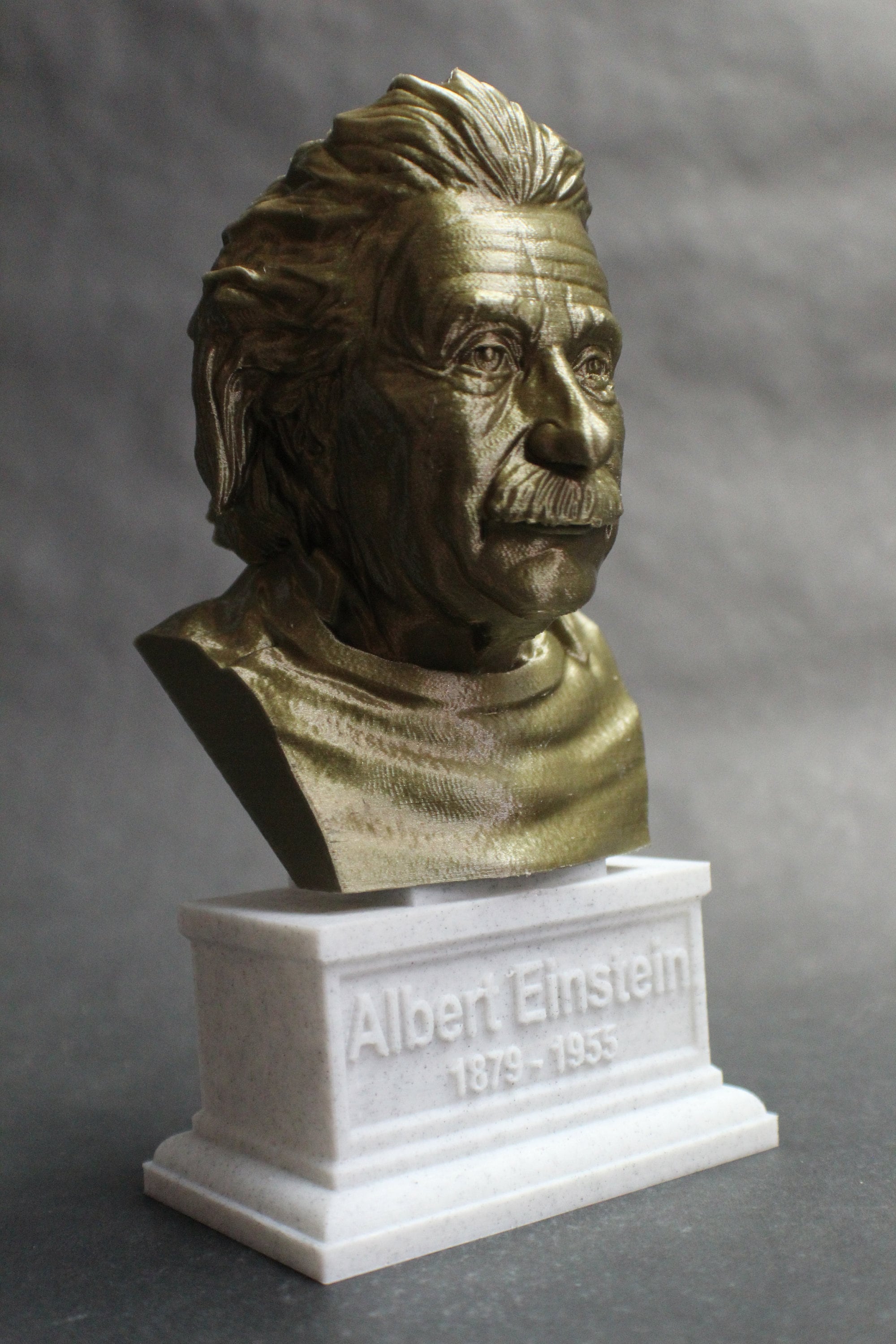 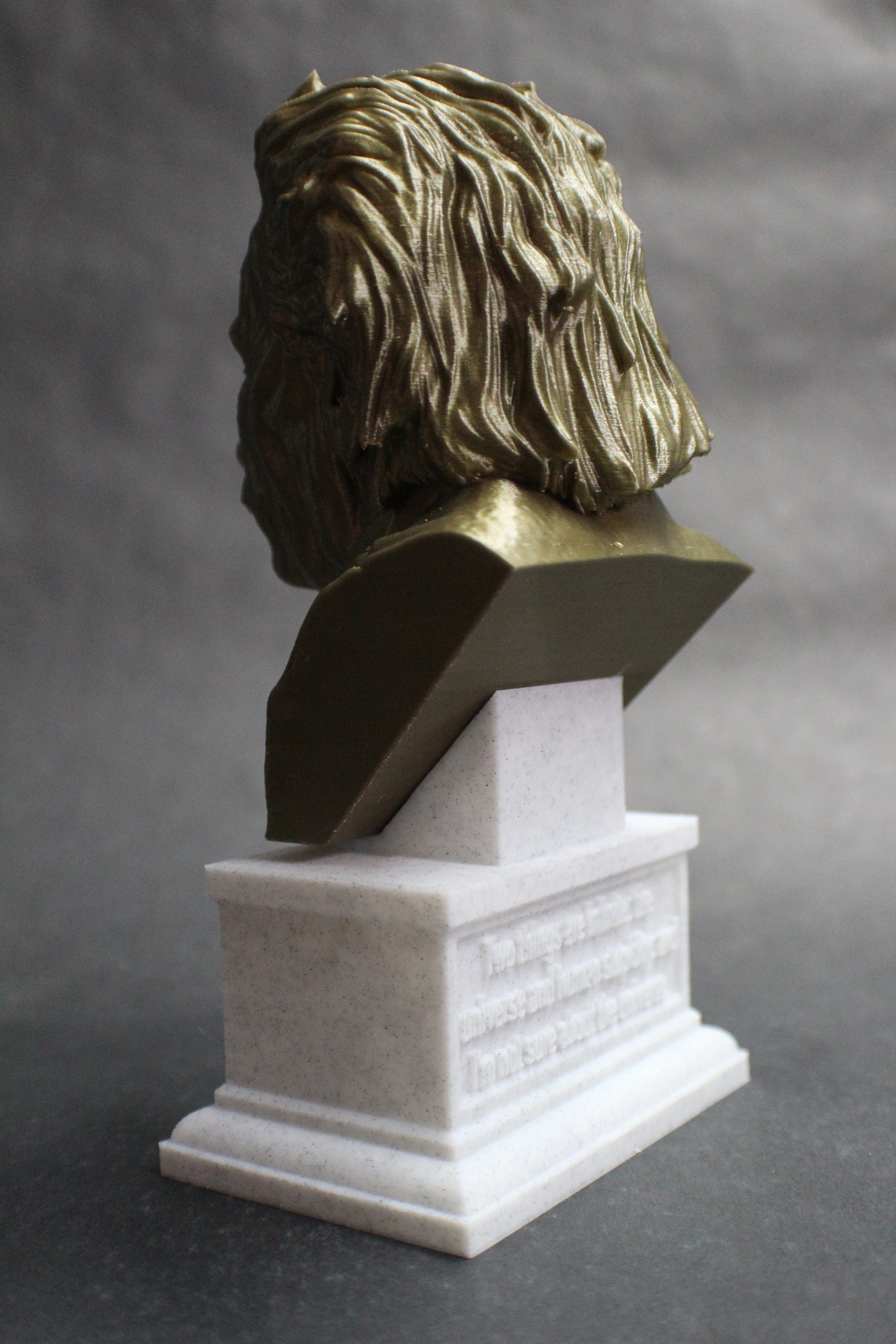 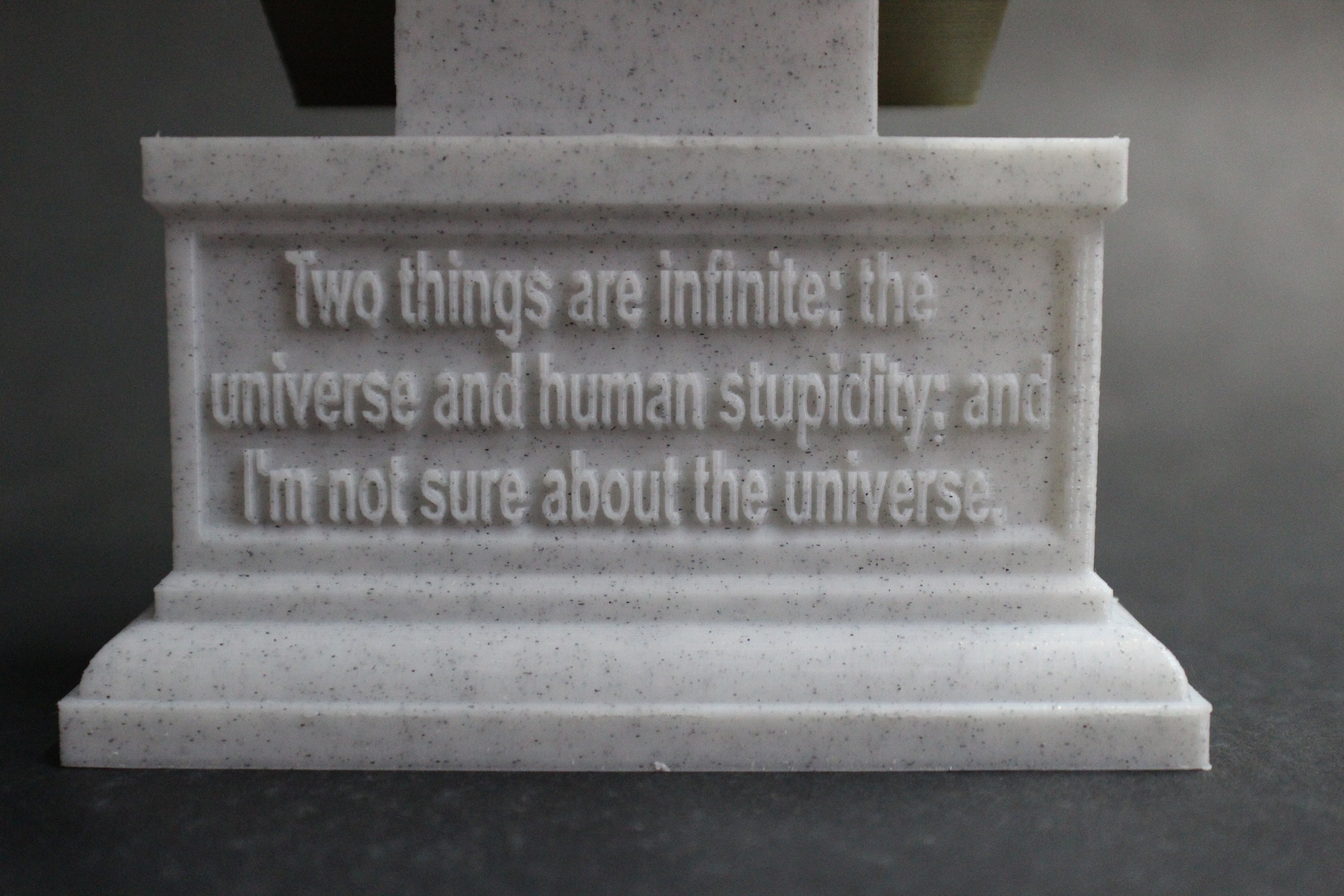 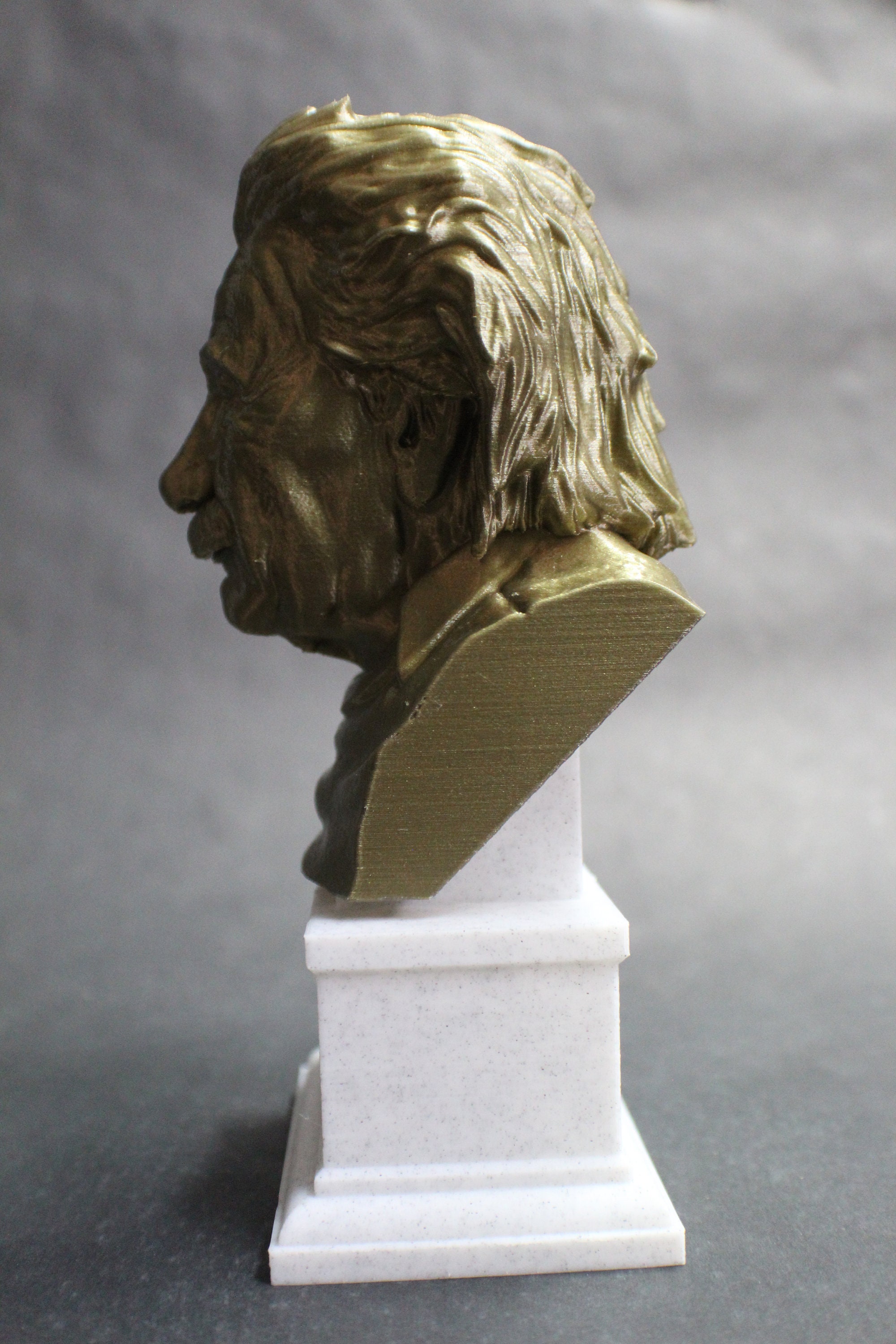 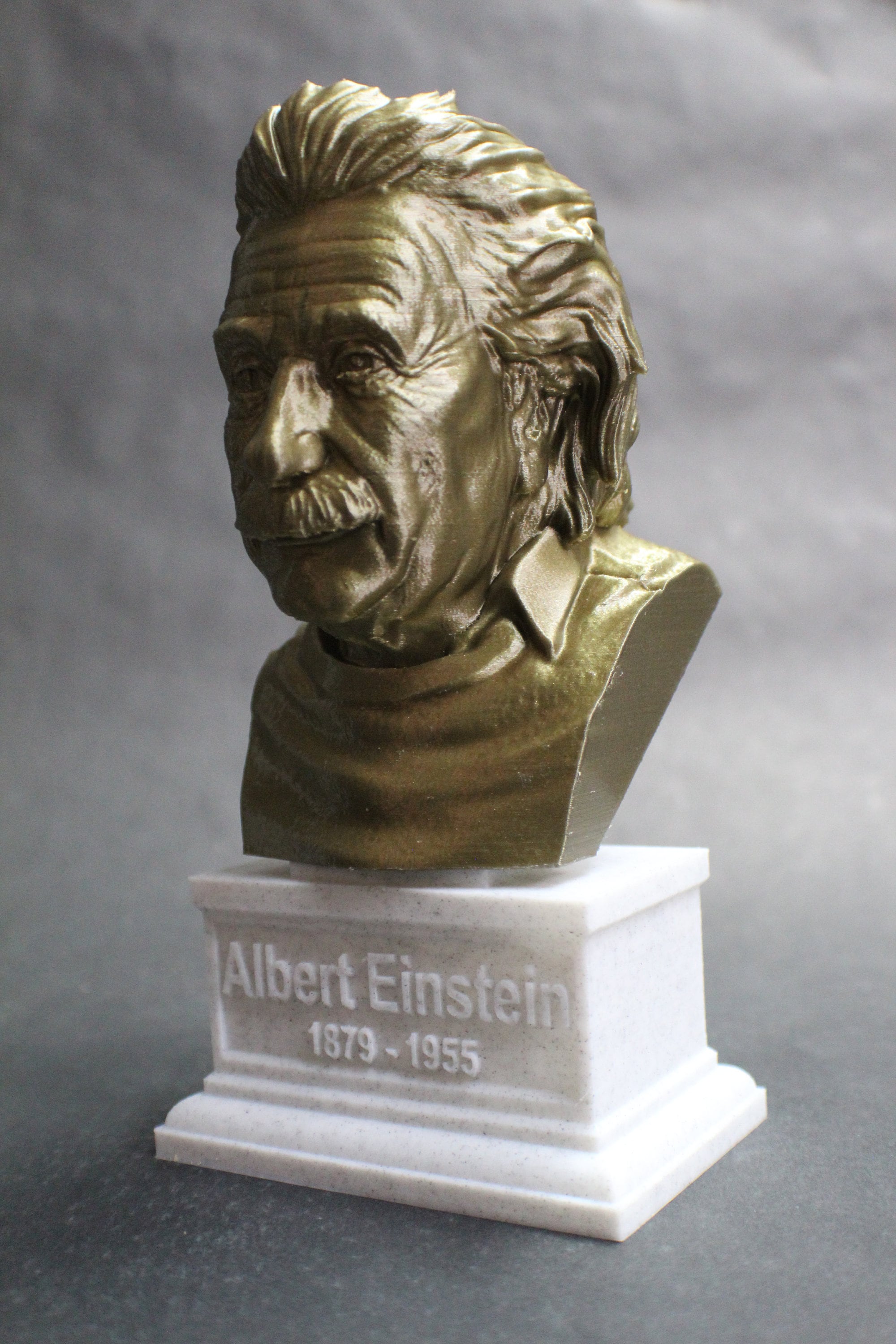 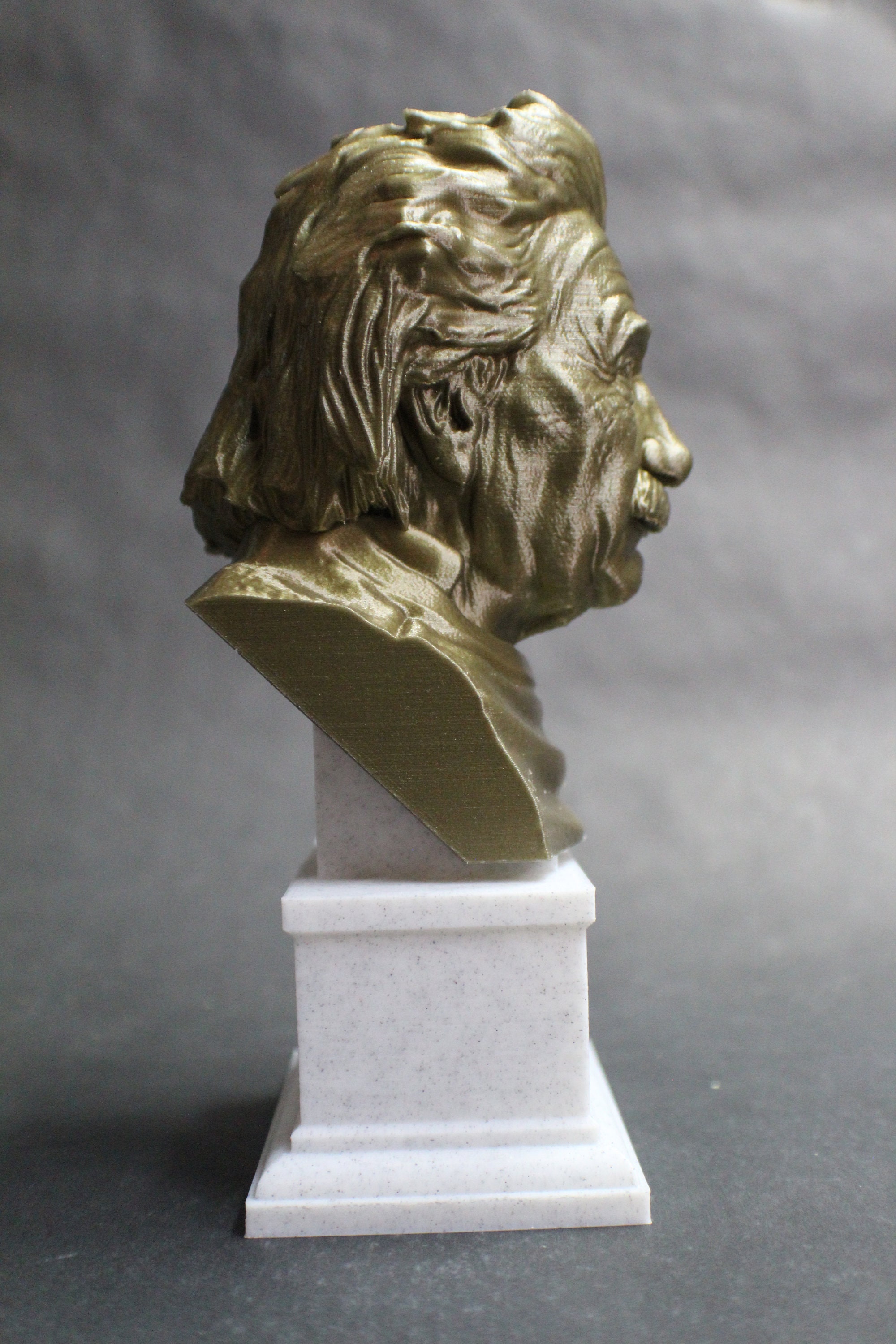 This is a 3D printed bust of Albert Einstein, famous German mathematician and physicist. This one is printed in a marble and bronze PLA, giving it a realistic stone look and a surprise whenever someone picks it up to discover it's actual weight. It is more durable than alabaster or plaster, and is washable with lukewarm soapy water for easy spring cleaning. It comes on a custom plinth that has his lifetime on the front, and the quote:

Quotes:
Default - "Two things are infinite: the universe and human stupidity; and I'm not so sure about the universe" on the back.
"Life is like riding a bicycle. To keep your balance, you must keep moving."
"The only reason for time is so that everything doesn't happen at once."
Custom, place quote in comment

It stands 7 inches tall, about 3.5 inches wide, and 4 inches deep. If you'd like a different Einstein quote on the back, please let me know in your comment when you check out.

Albert Einstein (14 March 1879 – 18 April 1955) was a German-born theoretical physicist who developed the theory of relativity, one of the two pillars of modern physics (alongside quantum mechanics). His work is also known for its influence on the philosophy of science. He is best known to the general public for his mass–energy equivalence formula E = mc2, which has been dubbed "the world's most famous equation". He received the 1921 Nobel Prize in Physics "for his services to theoretical physics, and especially for his discovery of the law of the photoelectric effect", a pivotal step in the development of quantum theory.

Near the beginning of his career, Einstein thought that Newtonian mechanics was no longer enough to reconcile the laws of classical mechanics with the laws of the electromagnetic field. This led him to develop his special theory of relativity during his time at the Swiss Patent Office in Bern (1902–1909), Switzerland. However, he realized that the principle of relativity could also be extended to gravitational fields, and he published a paper on general relativity in 1916 with his theory of gravitation. He continued to deal with problems of statistical mechanics and quantum theory, which led to his explanations of particle theory and the motion of molecules. He also investigated the thermal properties of light which laid the foundation of the photon theory of light. In 1917, he applied the general theory of relativity to model the structure of the universe.

Einstein lived in Switzerland between 1895 and 1914, except for one year in Prague, and he received his academic diploma from the Swiss federal polytechnic school (later the Eidgenössische Technische Hochschule, ETH) in Zürich in 1900. He acquired Swiss citizenship in 1901, which he kept for the rest of his life after being stateless for more than five years. In 1905, he was awarded a PhD by the University of Zurich. The same year, he published four groundbreaking papers during his renowned annus mirabilis (miracle year) which brought him to the notice of the academic world at the age of 26. Einstein taught theoretical physics at Zurich between 1912 and 1914 before he left for Berlin, where he was elected to the Prussian Academy of Sciences.

Excellent likeness of Einstein... nice finish, no rough spots at all... I asked for a specific quote on the front of the plinth, and the maker was happy to oblige... the bust arrived quickly after I placed the order... great experience!