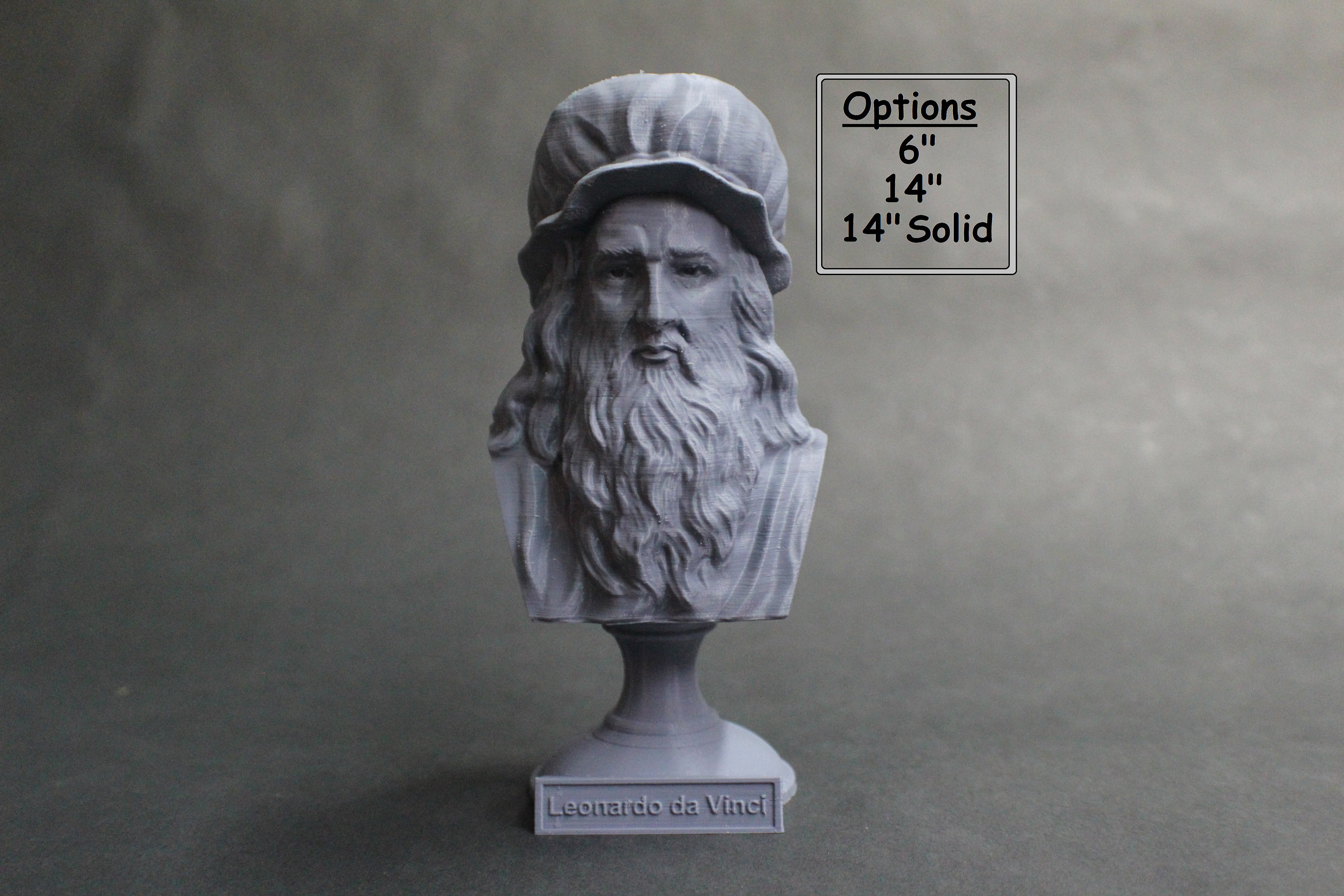 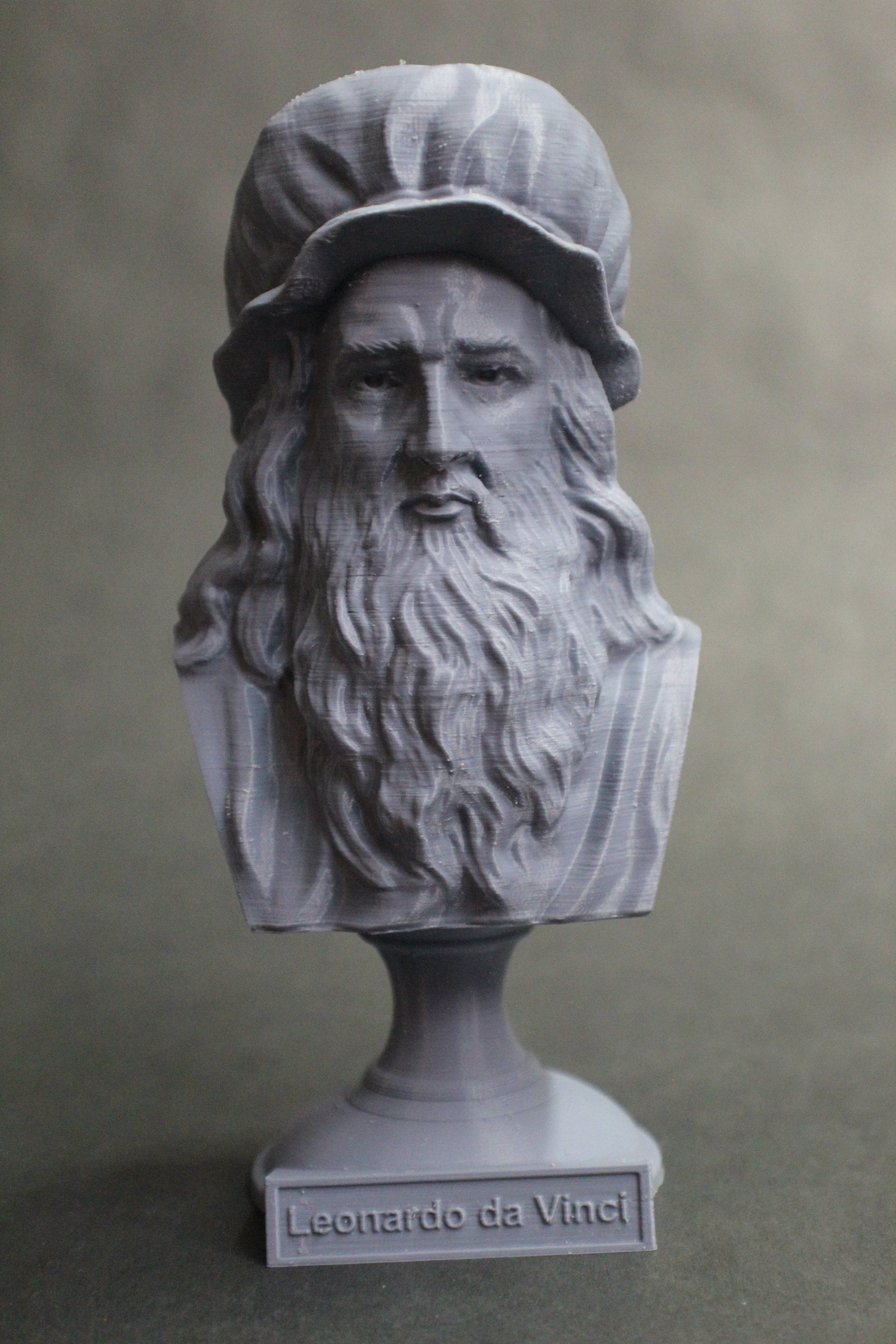 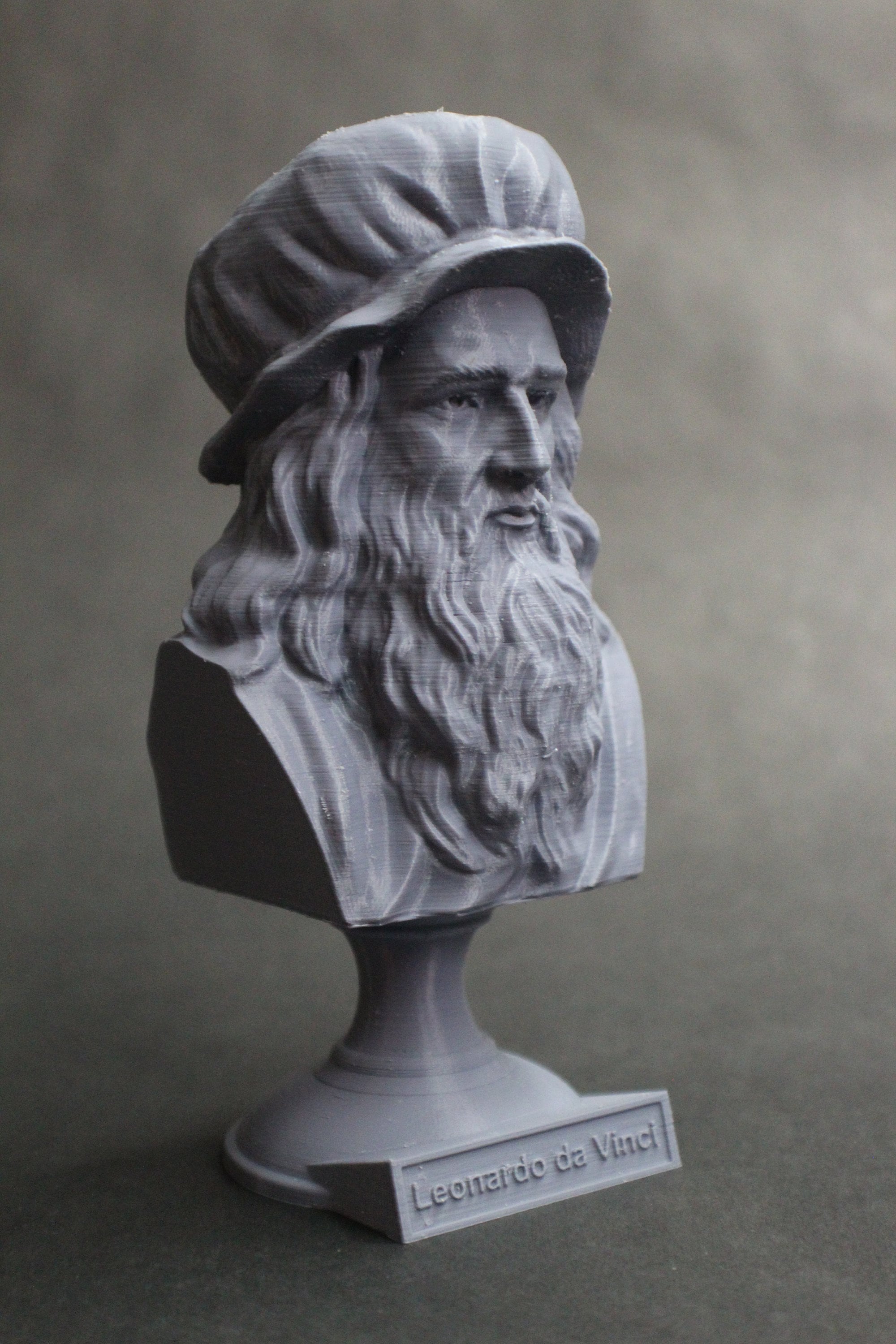 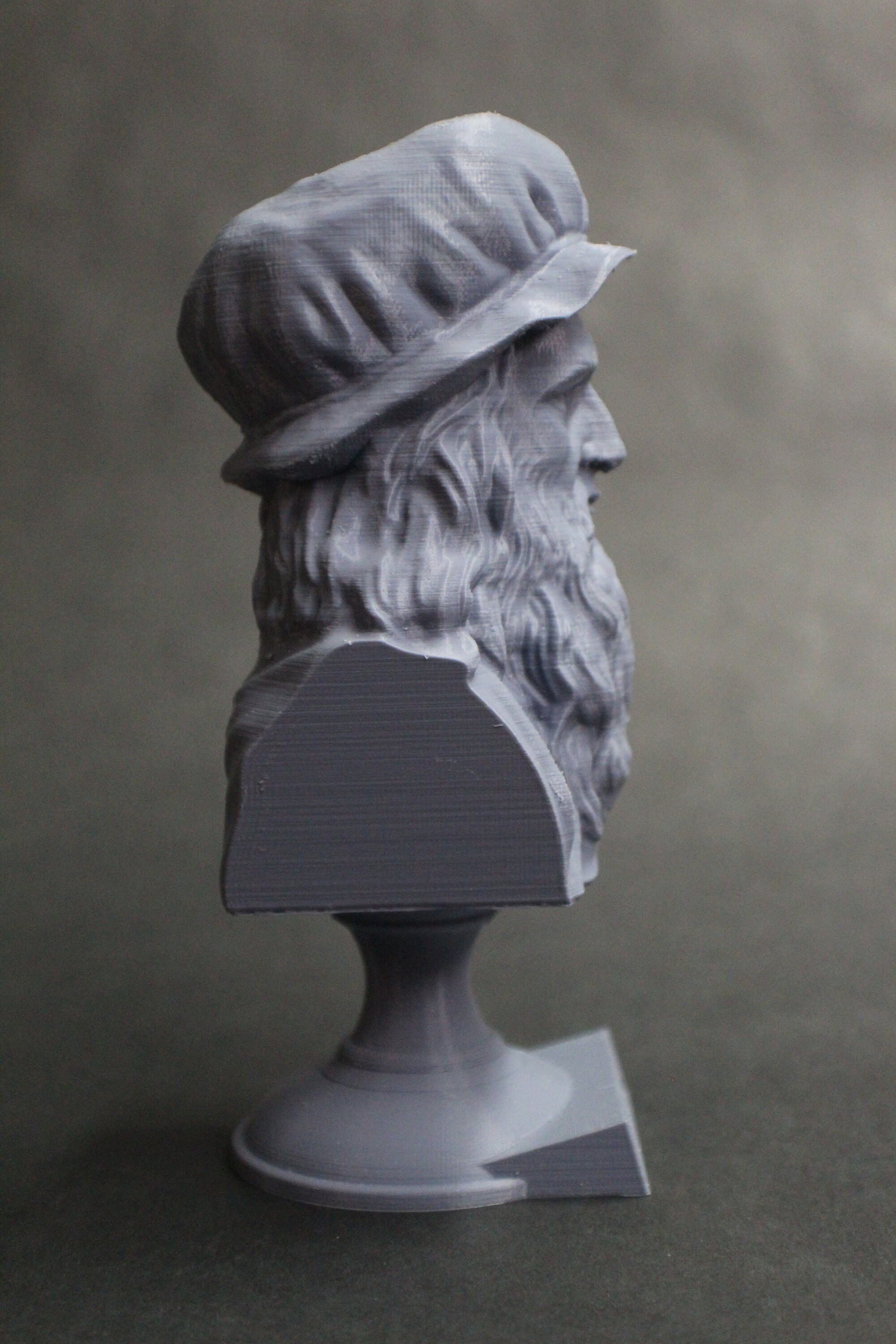 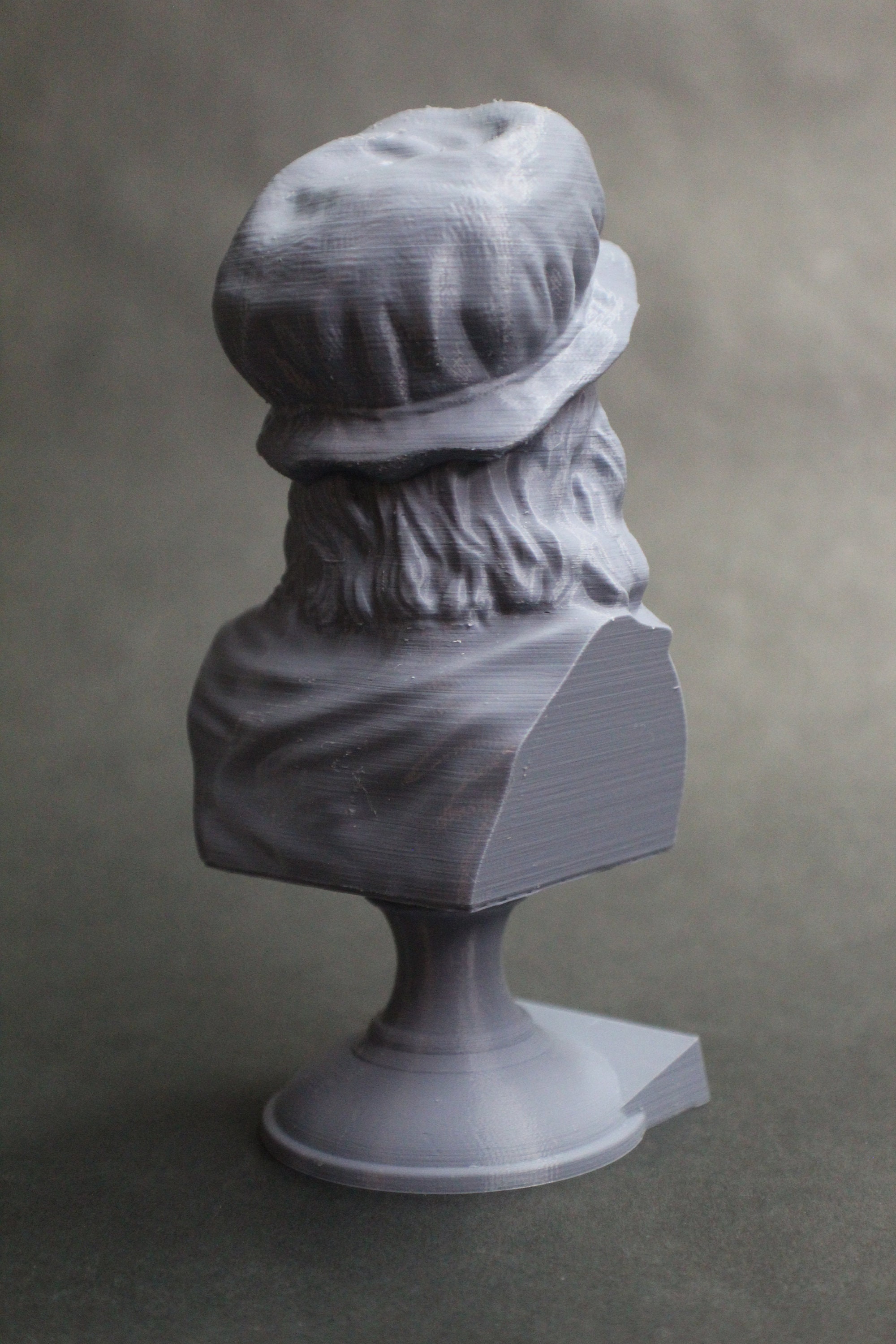 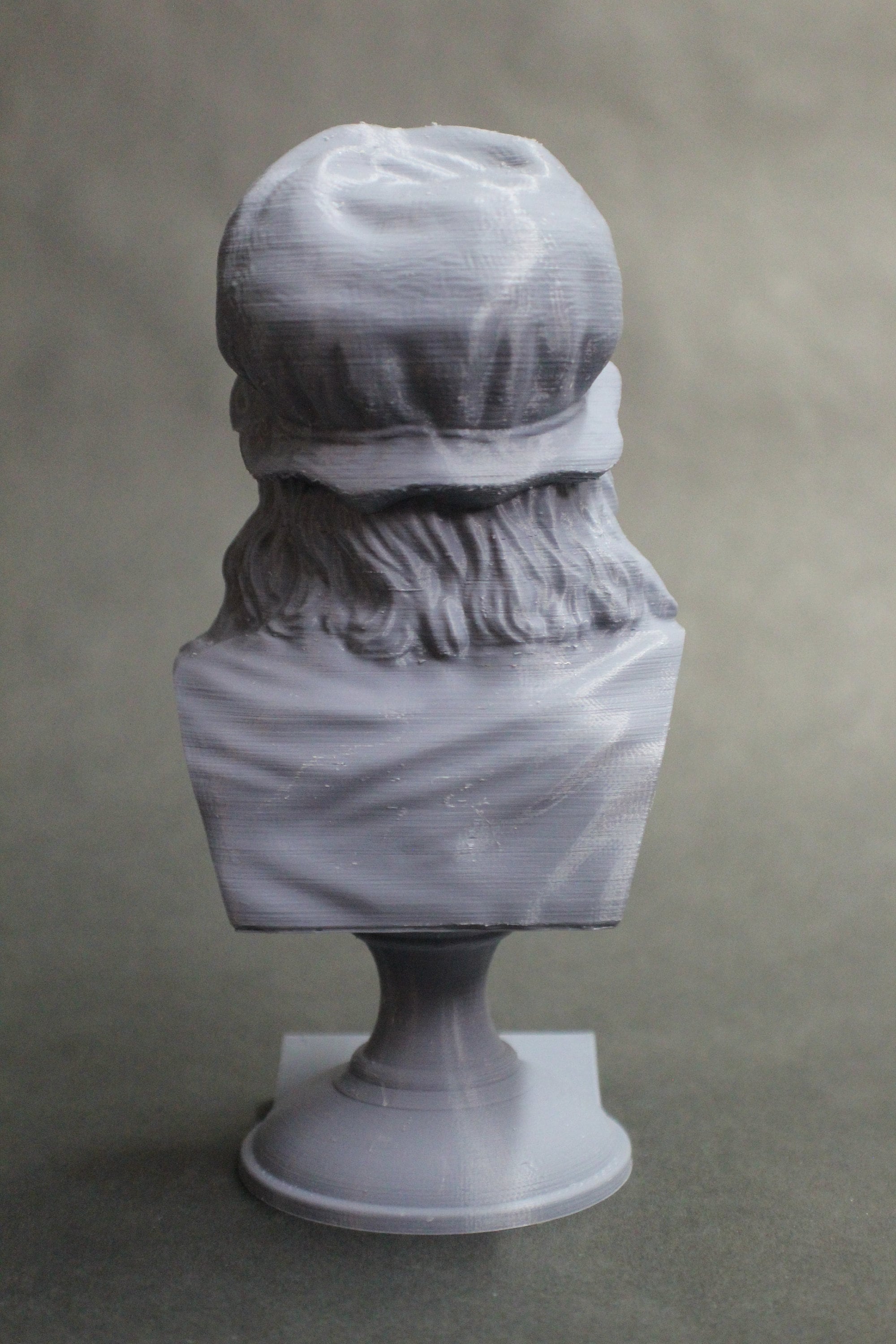 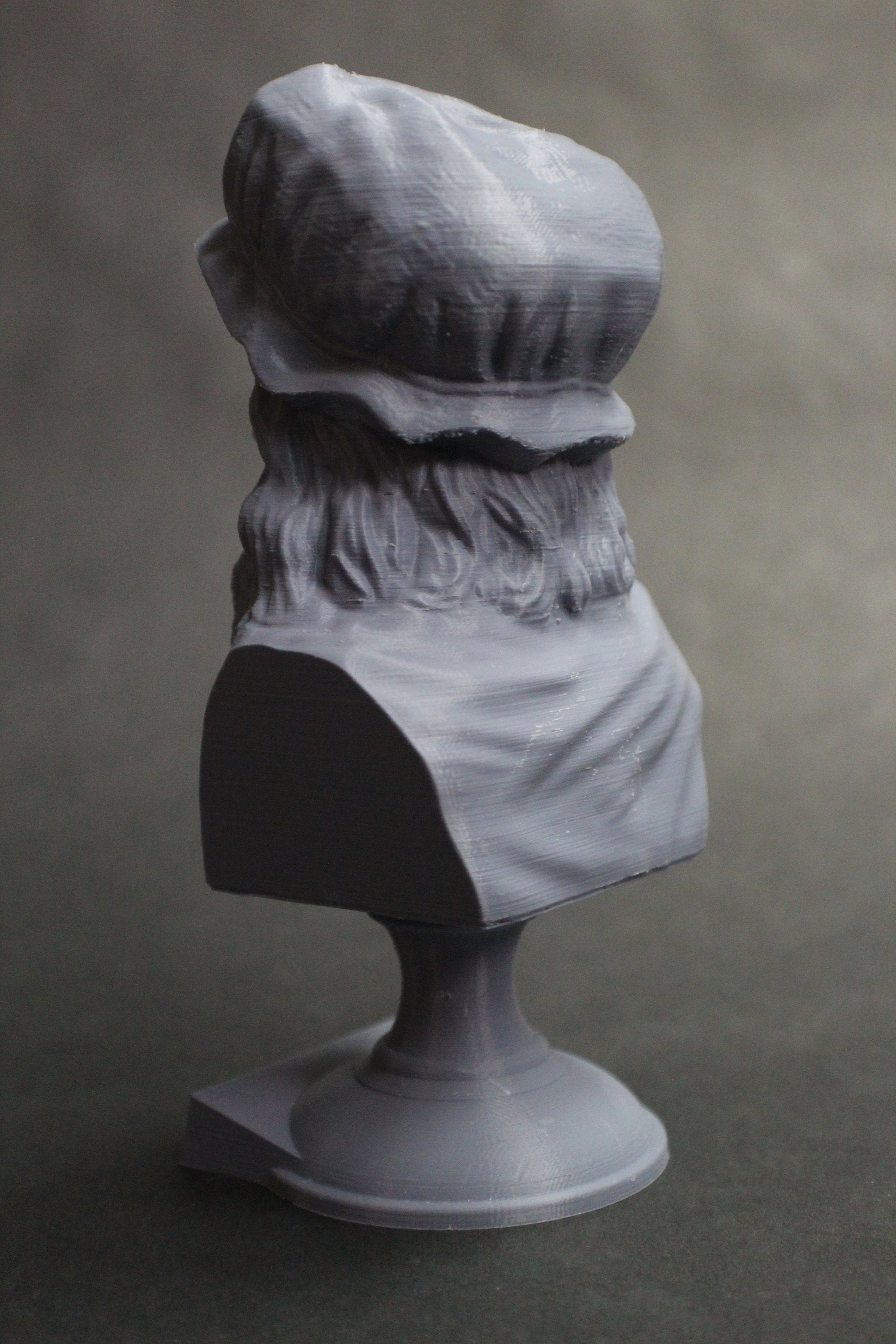 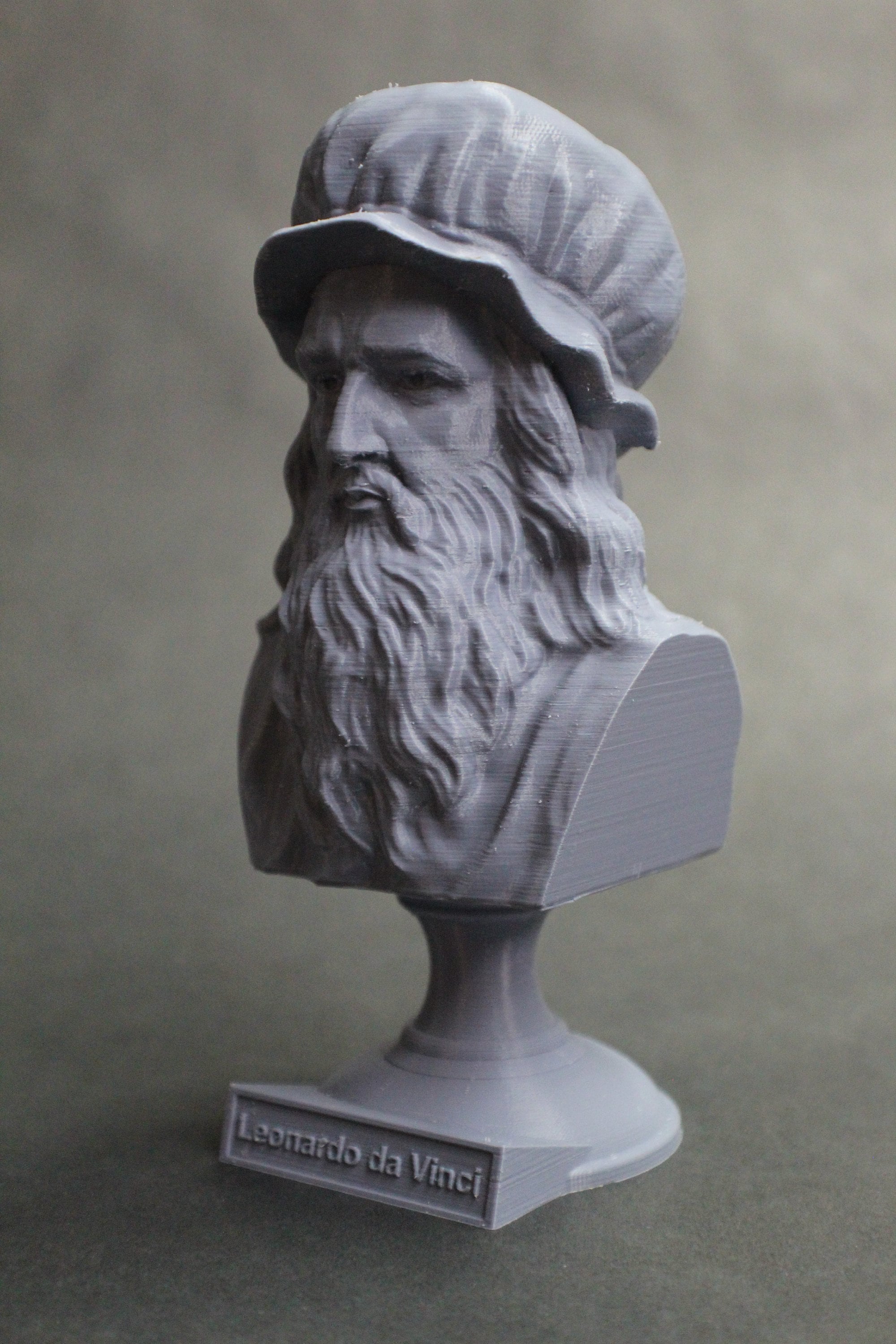 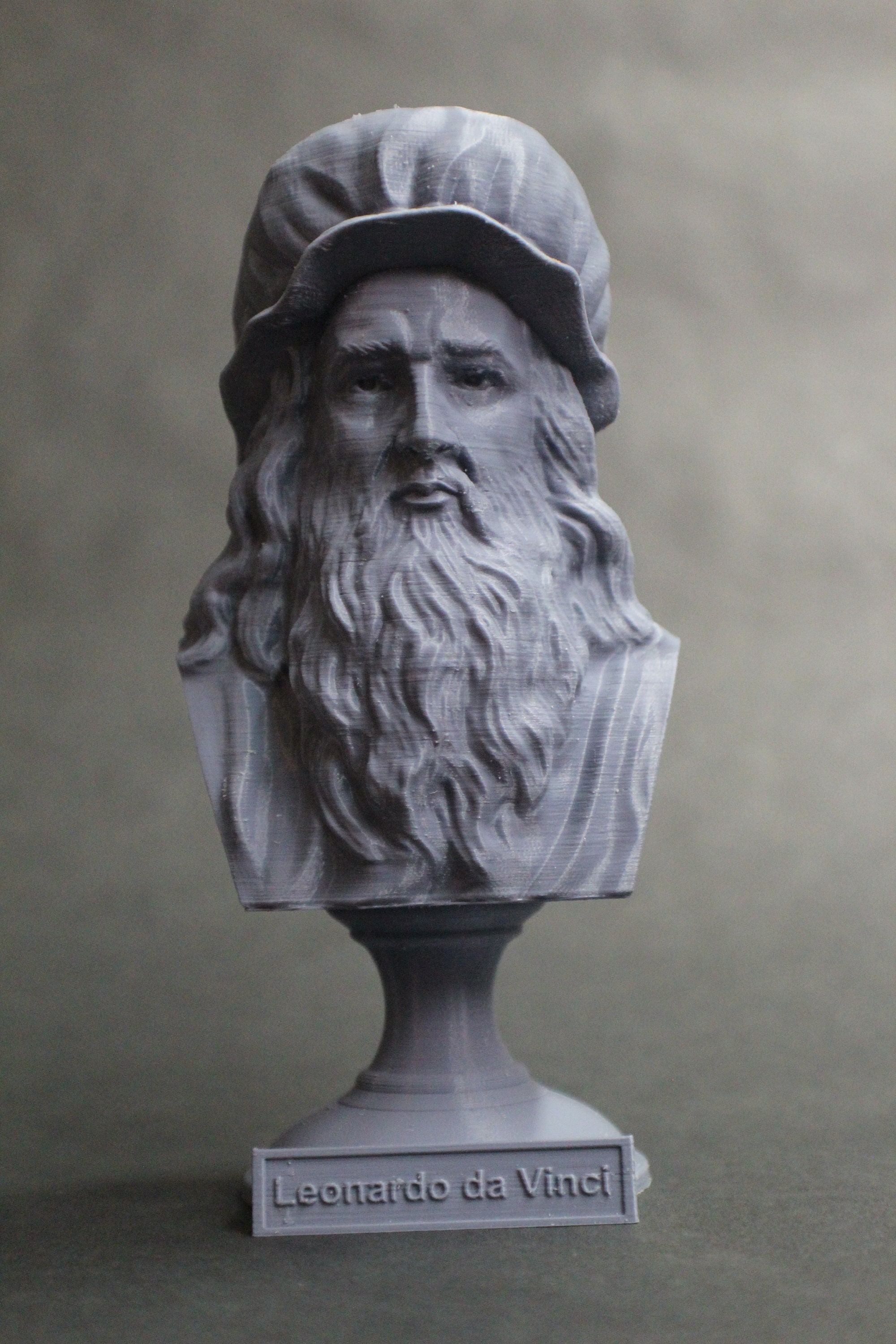 This is a 3D printed bust of Leonardo da Vinci, Italian Polymath, inventor, painter, and Renaissance man. This one is printed in a gray PLA, giving it a detailed look and a surprise whenever someone picks it up to discover it's actual weight. It is more durable than alabaster or plaster, and is washable with lukewarm soapy water for easy spring cleaning. It comes on a custom plinth that has his name on the front.

Leonardo di ser Piero da Vinci more commonly Leonardo da Vinci or simply Leonardo, was an Italian polymath of the Renaissance whose areas of interest included invention, drawing, painting, sculpting, architecture, science, music, mathematics, engineering, literature, anatomy, geology, astronomy, botany, writing, history, and cartography. He has been variously called the father of paleontology, ichthyology, and architecture, and he is widely considered one of the greatest painters of all time. The Mona Lisa is the most famous of his works and the most popular portrait ever made.[5] The Last Supper is the most reproduced religious painting of all time and his Vitruvian Man drawing is regarded as a cultural icon as well. Perhaps 15 of his paintings have survived. Nevertheless, these few works—together with his notebooks, which contain drawings, scientific diagrams, and his thoughts on the nature of painting—compose a contribution to later generations of artists rivaled only by that of Leonardo's contemporary Michelangelo.

Although he had no formal academic training, many historians and scholars regard Leonardo as the prime exemplar of the 'Universal Genius' or 'Renaissance Man', an individual of "unquenchable curiosity" and "feverishly inventive imagination", and he is widely considered one of the most diversely talented individuals ever to have lived. According to art historian Helen Gardner, the scope and depth of his interests were without precedent in recorded history, and "his mind and personality seem to us superhuman, while the man himself mysterious and remote."[6] Scholars interpret his view of the world as being based in logic, though the empirical methods he used were unorthodox for his time.

Leonardo is revered for his technological ingenuity. He conceptualized flying machines, a type of armored fighting vehicle, concentrated solar power, an adding machine, and the double hull. Relatively few of his designs were constructed or even feasible during his lifetime, as the modern scientific approaches to metallurgy and engineering were only in their infancy during the Renaissance. Some of his smaller inventions, however, entered the world of manufacturing unheralded, such as an automated bobbin winder and a machine for testing the tensile strength of wire. He is also sometimes credited with the inventions of the parachute, helicopter, and tank. He made substantial discoveries in anatomy, civil engineering, geology, optics, and hydrodynamics, but he did not publish his findings and they had no direct influence on subsequent science.