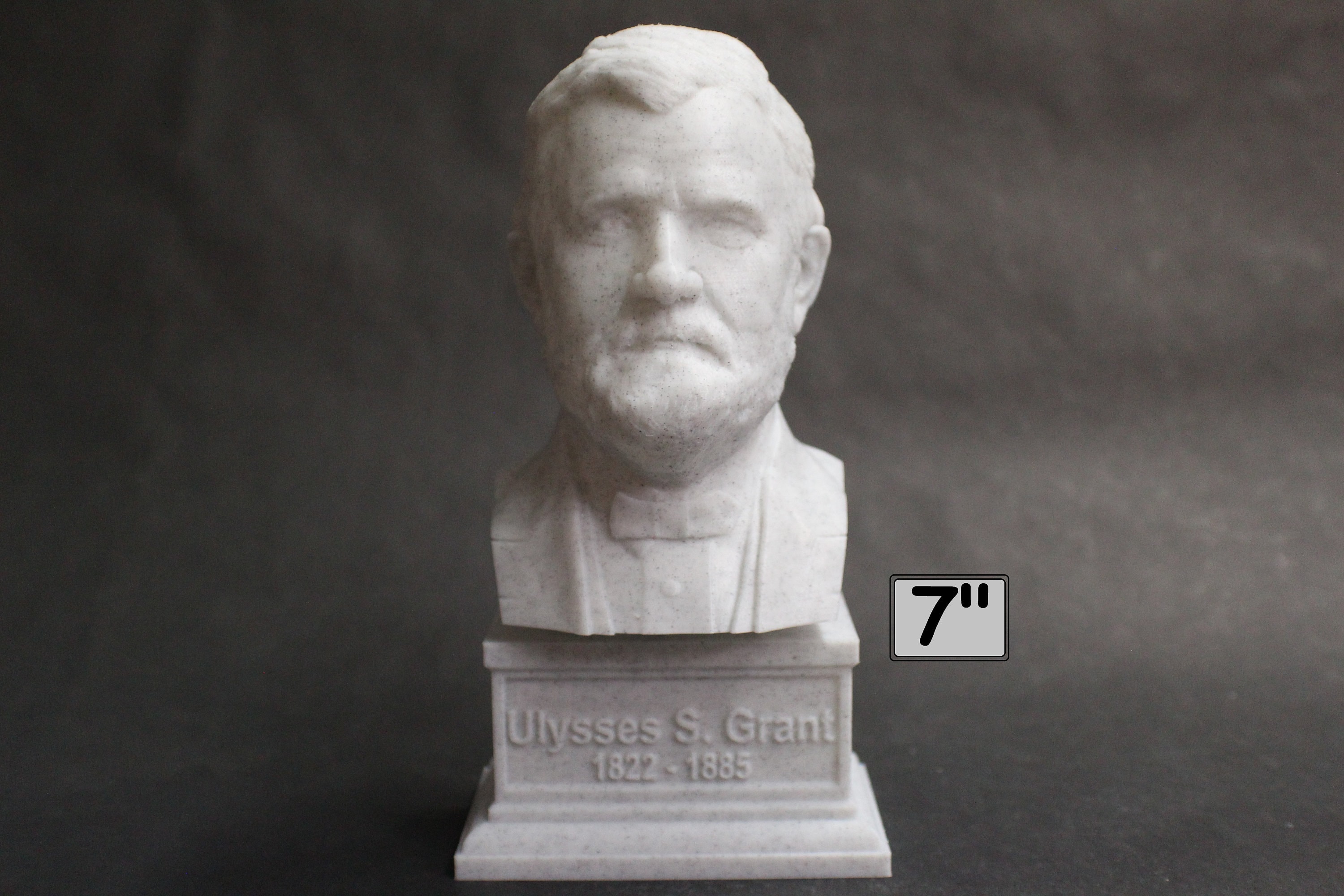 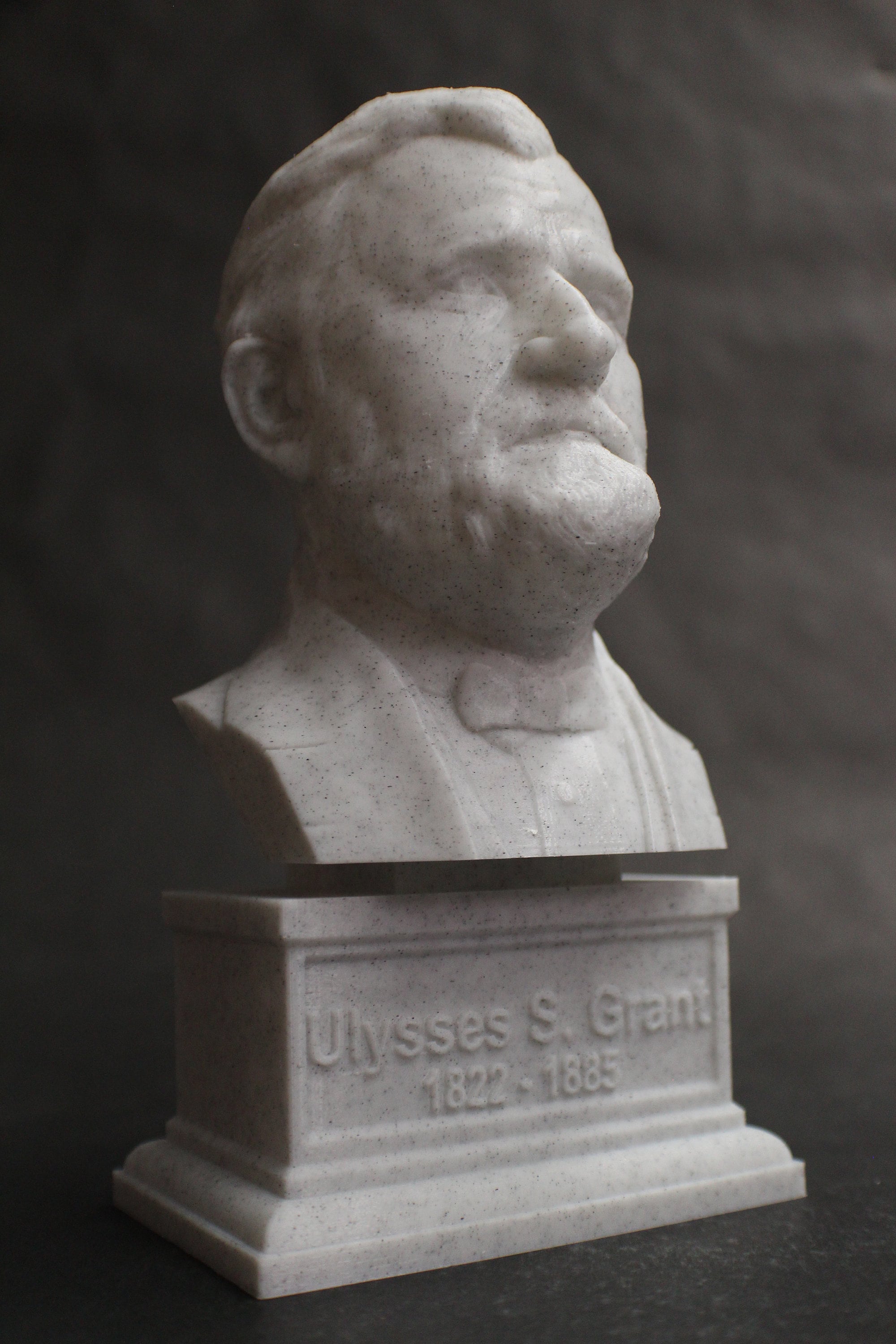 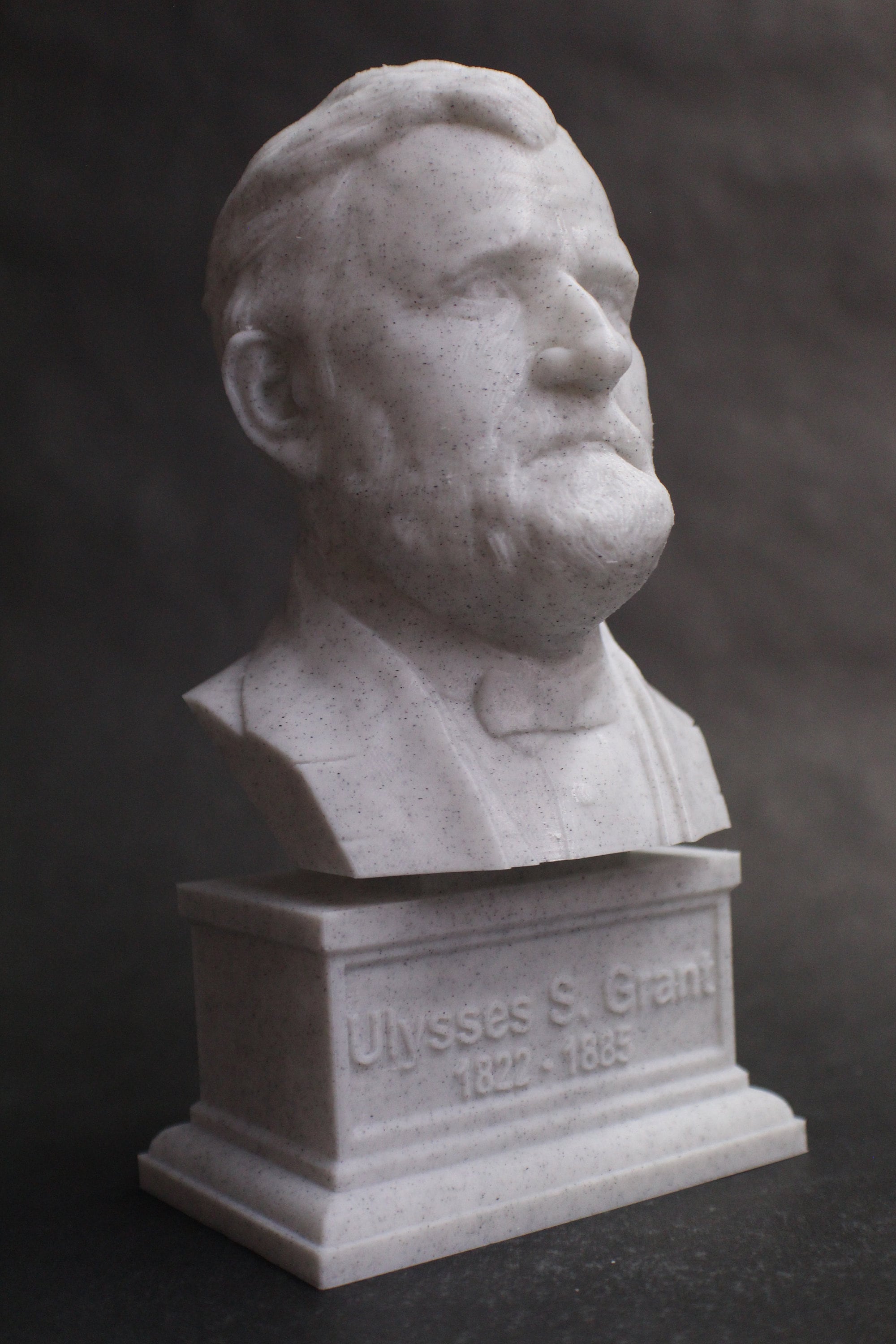 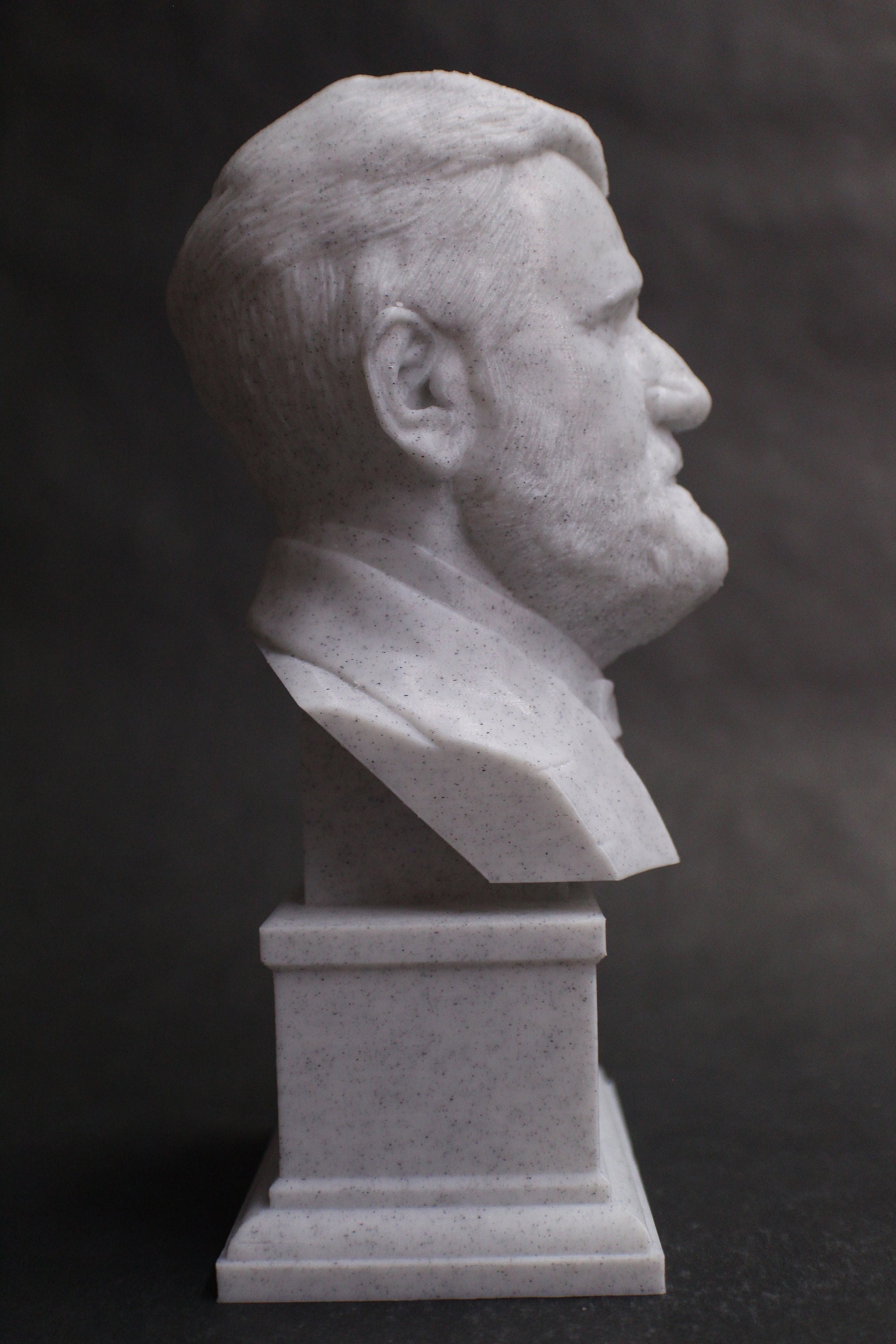 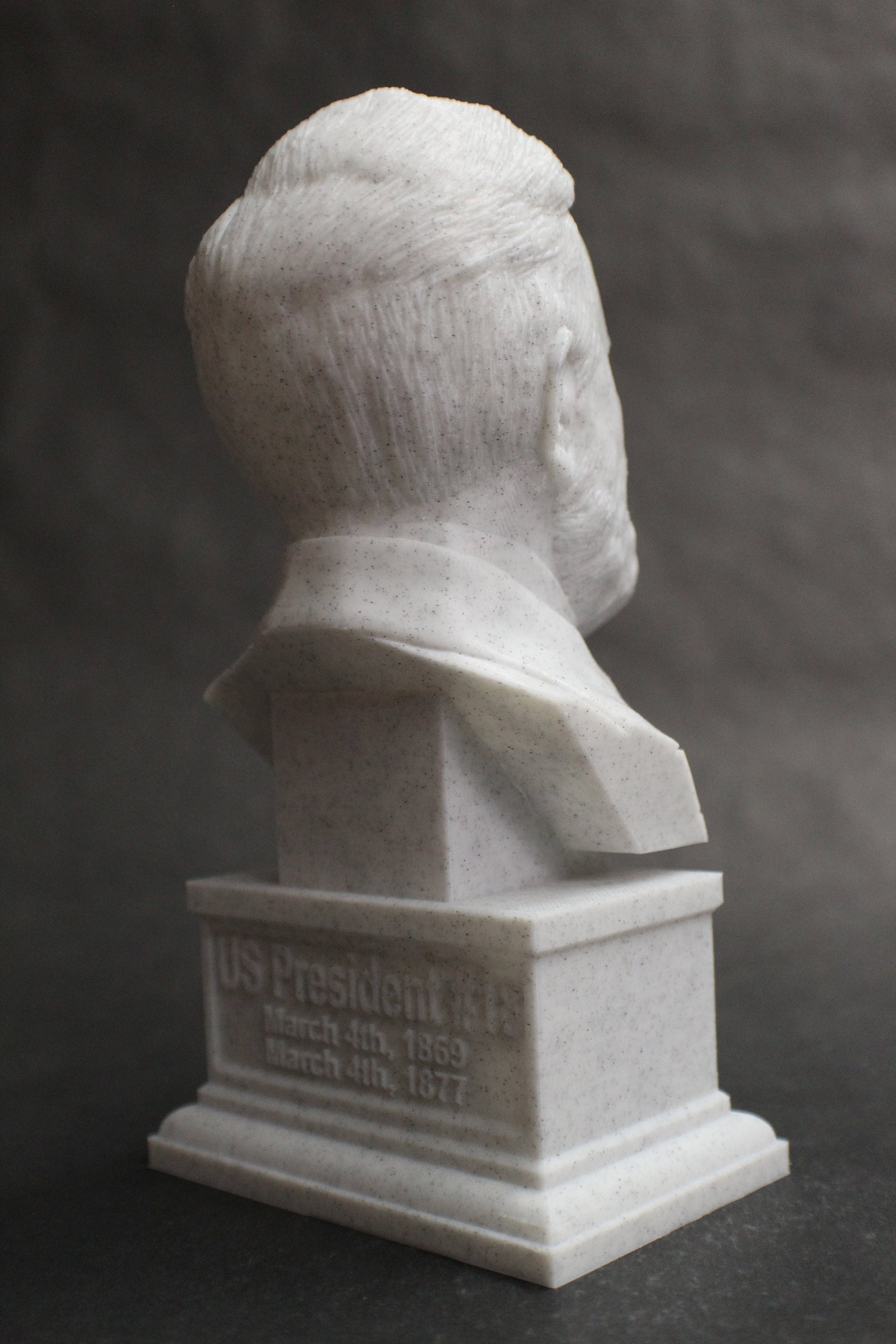 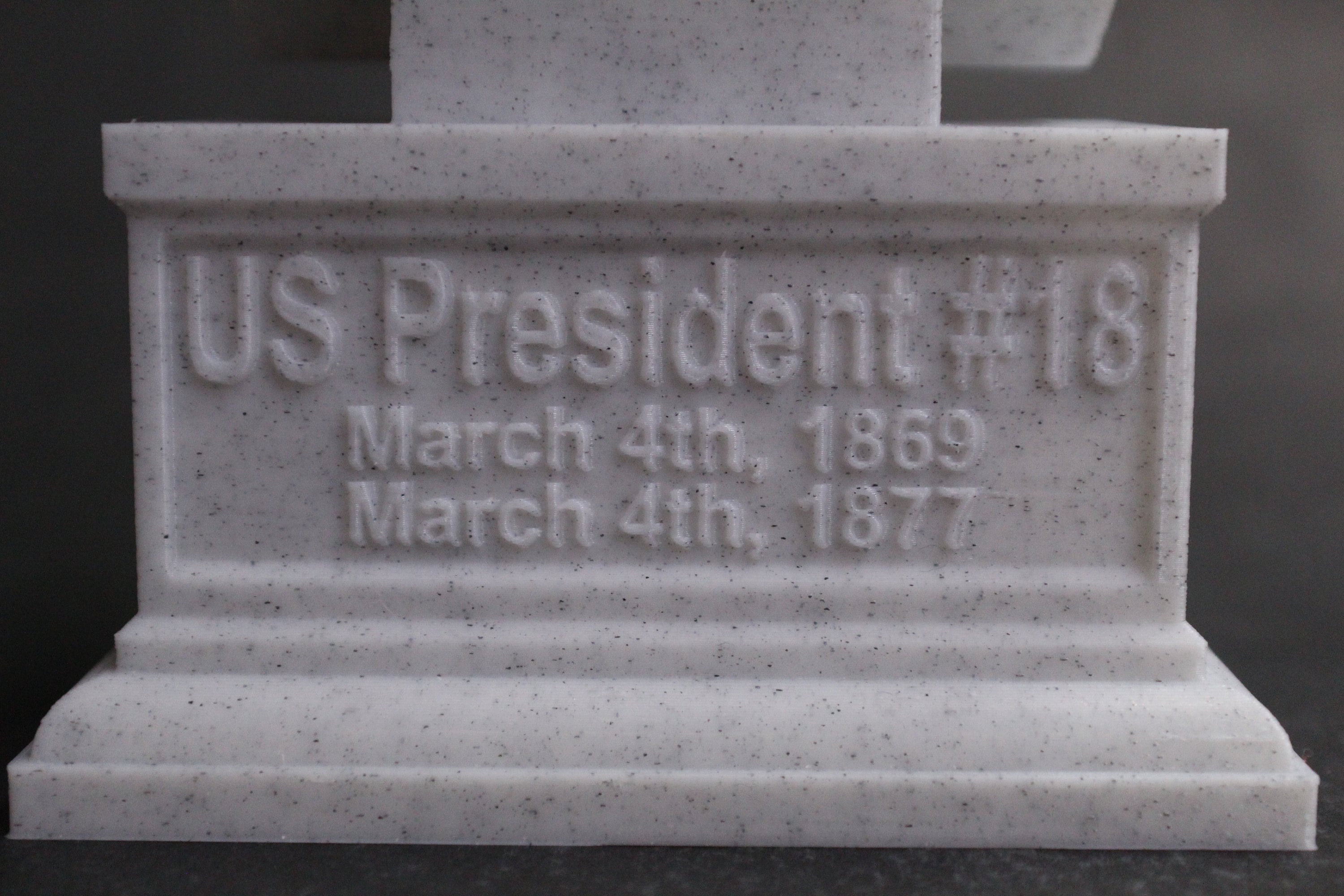 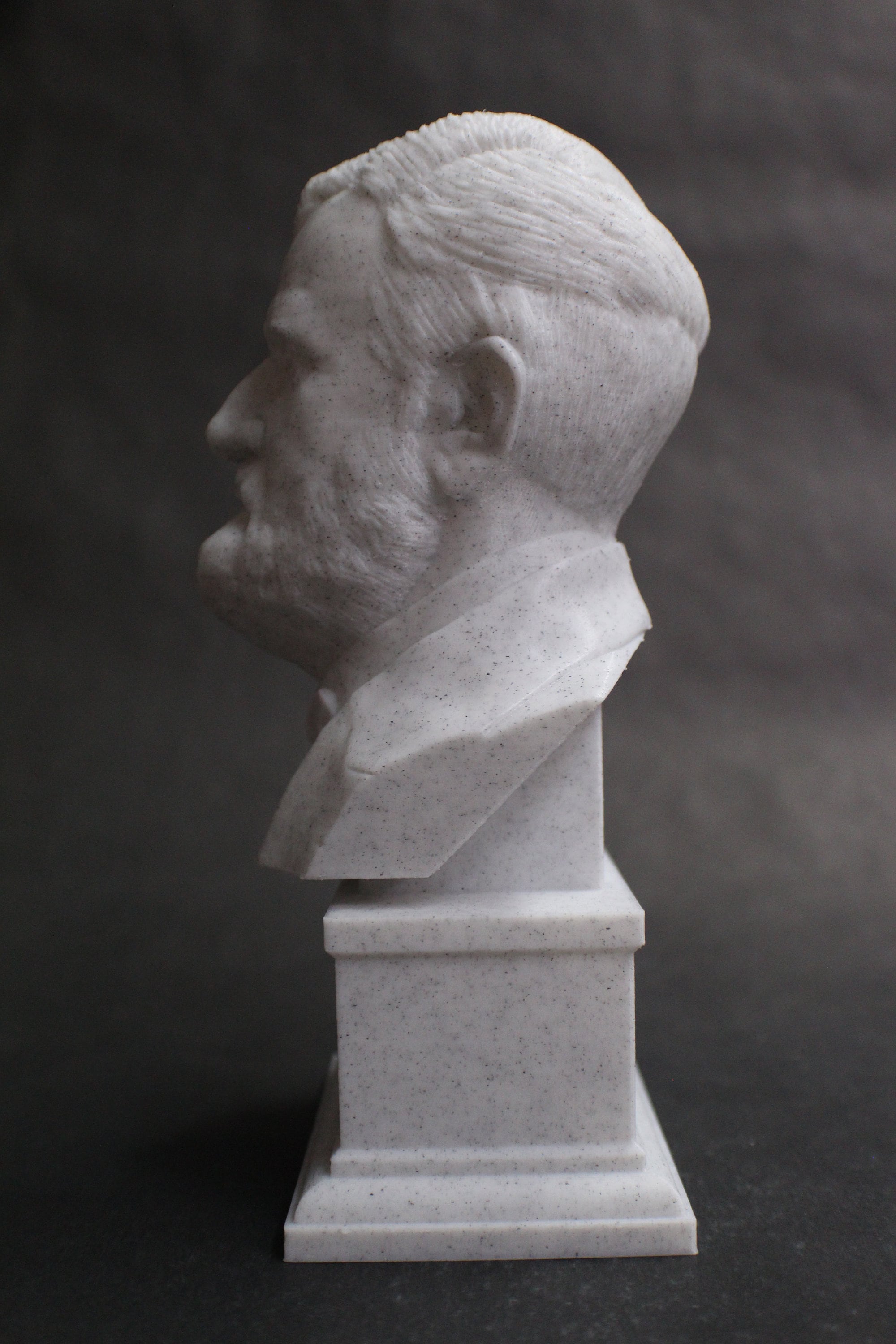 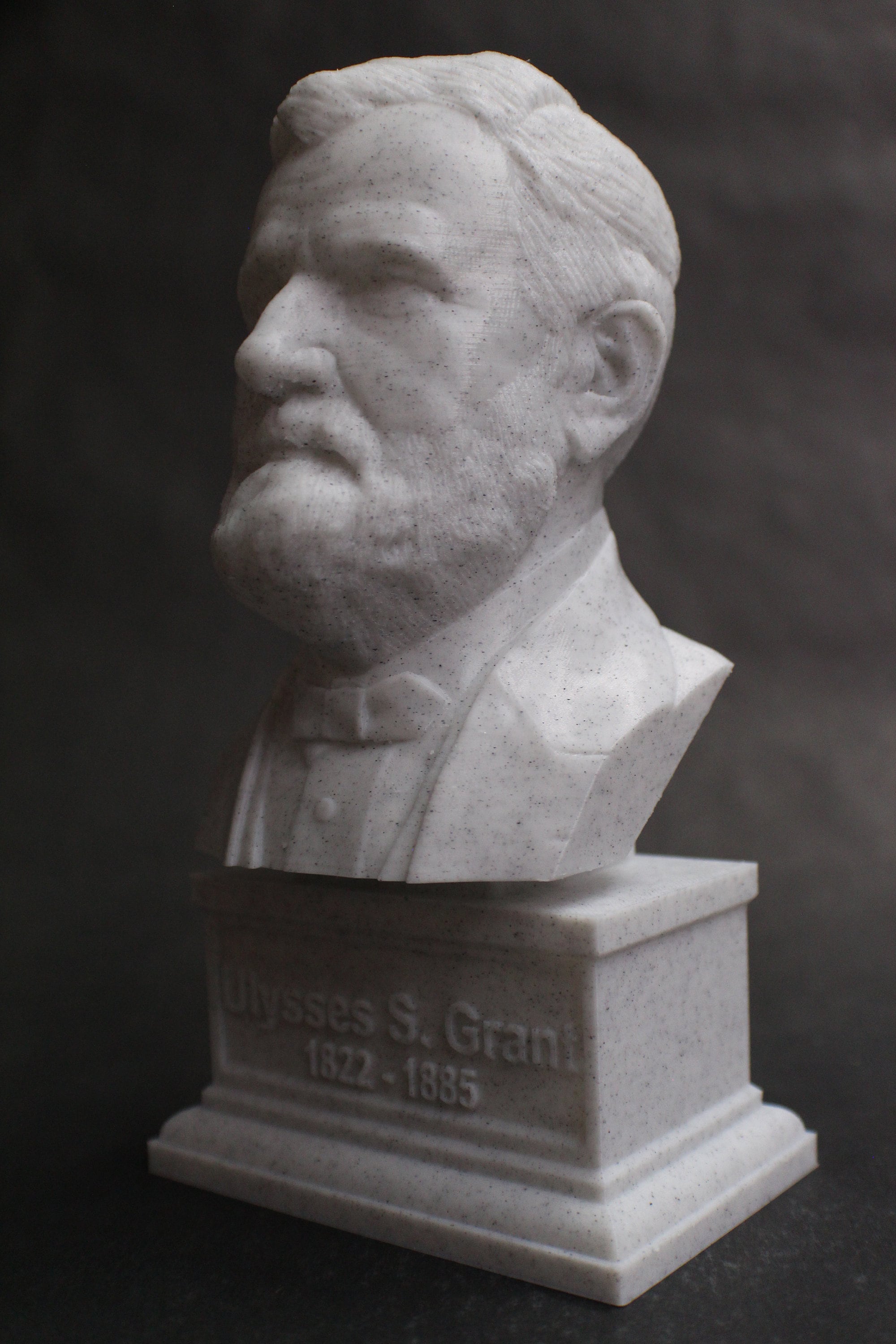 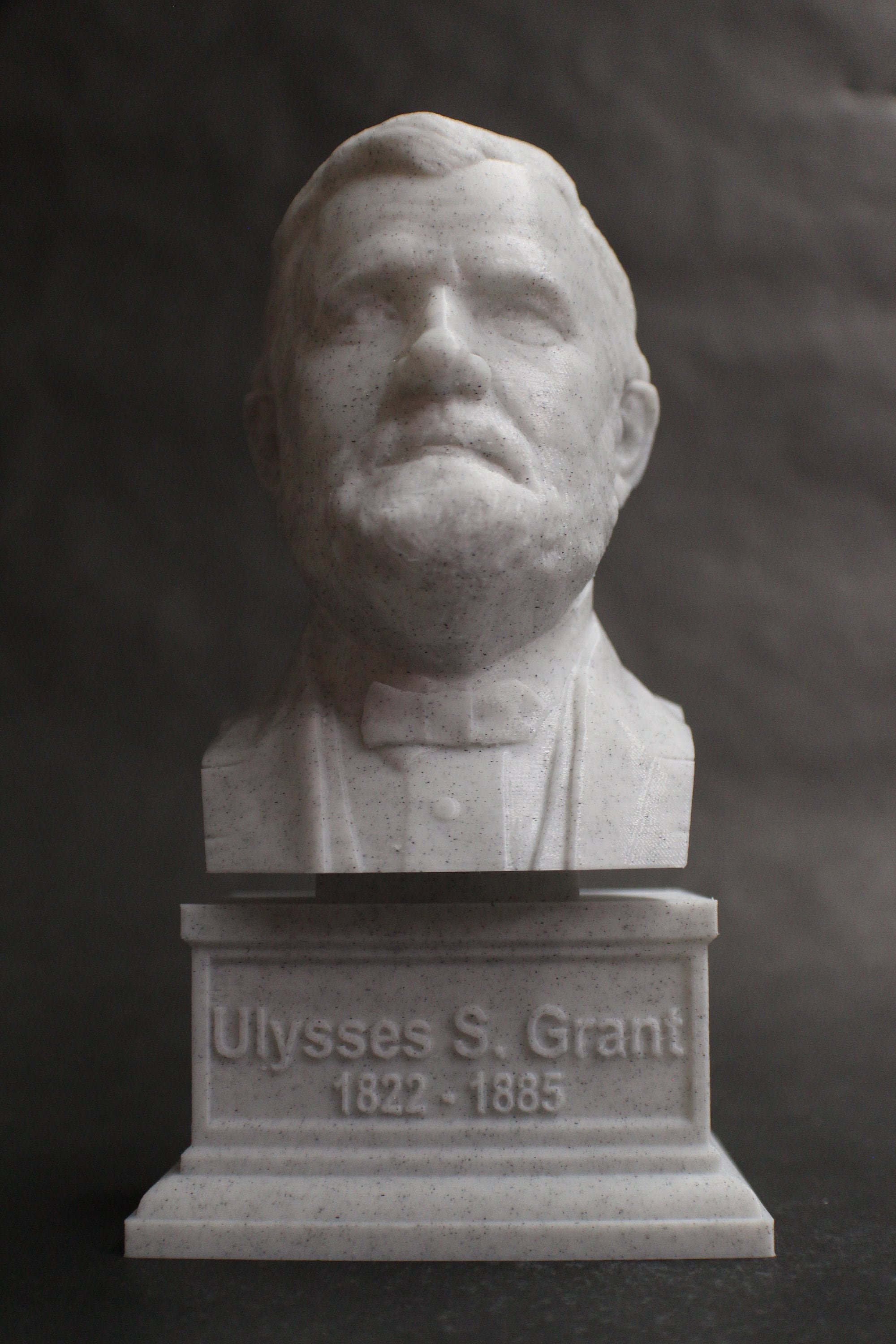 This 3D printed bust of Ulysses S. Grant, the eighteenth United States President. This one is printed in a marble PLA, giving it a realistic stone look and a surprise whenever someone picks it up to discover it's actual weight. It is more durable than alabaster or plaster, and is washable with lukewarm soapy water for easy spring cleaning. It comes on a custom plinth that has his lifetime on the front, and his dates in office as president on the back.

Ulysses S. Grant (April 27, 1822 – July 23, 1885) was an American soldier, politician, and international statesman who served as the 18th president of the United States from 1869 to 1877. During the American Civil War, General Grant, with President Abraham Lincoln, led the Union Army to victory over the Confederacy. During the Reconstruction Era, President Grant led the Republicans in their efforts to remove the vestiges of Confederate nationalism, racism, and slavery.

From early childhood in Ohio, Grant was a skilled equestrian who had a talent for taming horses. He graduated from West Point in 1843 and served with distinction in the Mexican–American War. Upon his return, Grant married Julia Dent, and together they had four children. In 1854, Grant abruptly resigned from the army. He and his family struggled financially in civilian life for seven years. When the Civil War broke out in 1861, Grant joined the Union Army and rapidly rose in rank to general. Grant was persistent in his pursuit of the Confederate enemy, winning major battles and gaining Union control of the Mississippi River. In March 1864, President Lincoln promoted Grant to Lieutenant General, a rank previously reserved for George Washington. For over a year Grant's Army of the Potomac fought the Army of Northern Virginia led by Robert E. Lee in the Overland Campaign and at Petersburg. On April 9, 1865, Lee surrendered to Grant at Appomattox, and the war ended.

On April 14, 1865, Lincoln was assassinated. Grant continued his service under Lincoln's successor President Andrew Johnson and was promoted General of the Army in 1866. Disillusioned by Johnson's conservative approach to Reconstruction, Grant drifted toward the "Radical" Republicans. Elected the youngest 19th Century president in 1868, Grant stabilized the post-war national economy, created the Department of Justice, and prosecuted the Ku Klux Klan. He appointed African-Americans and Jewish-Americans to prominent federal offices. In 1871, Grant created the first Civil Service Commission. The Democrats and Liberal Republicans united behind Grant's opponent in the presidential election of 1872, but Grant was handily re-elected. Grant's new Peace Policy for Native Americans had both successes and failures. Grant's administration successfully resolved the Alabama claims and the Virginius Affair, but Congress rejected his Dominican annexation initiative. Grant's presidency was plagued by numerous public scandals, while the Panic of 1873 plunged the nation into a severe economic depression.