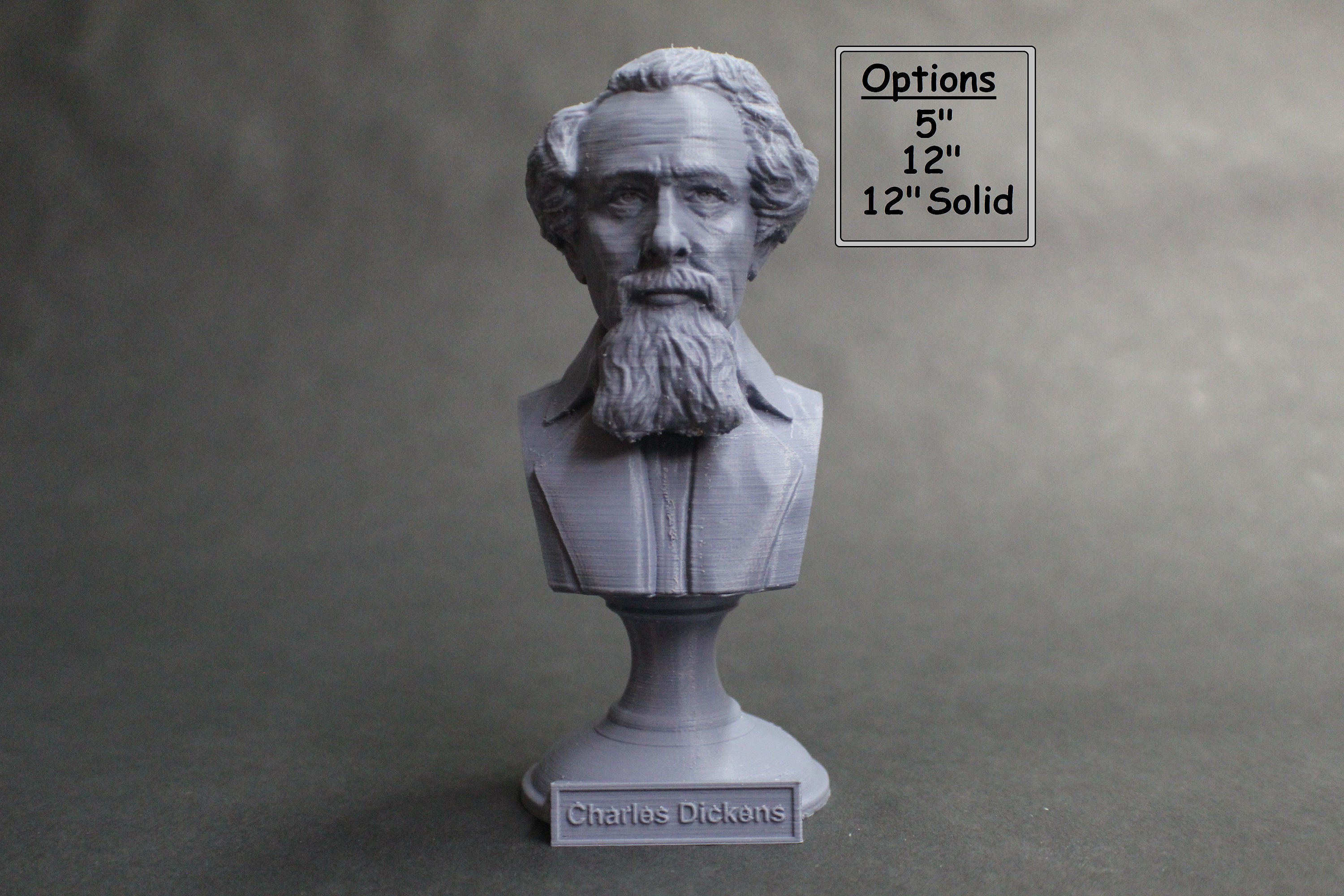 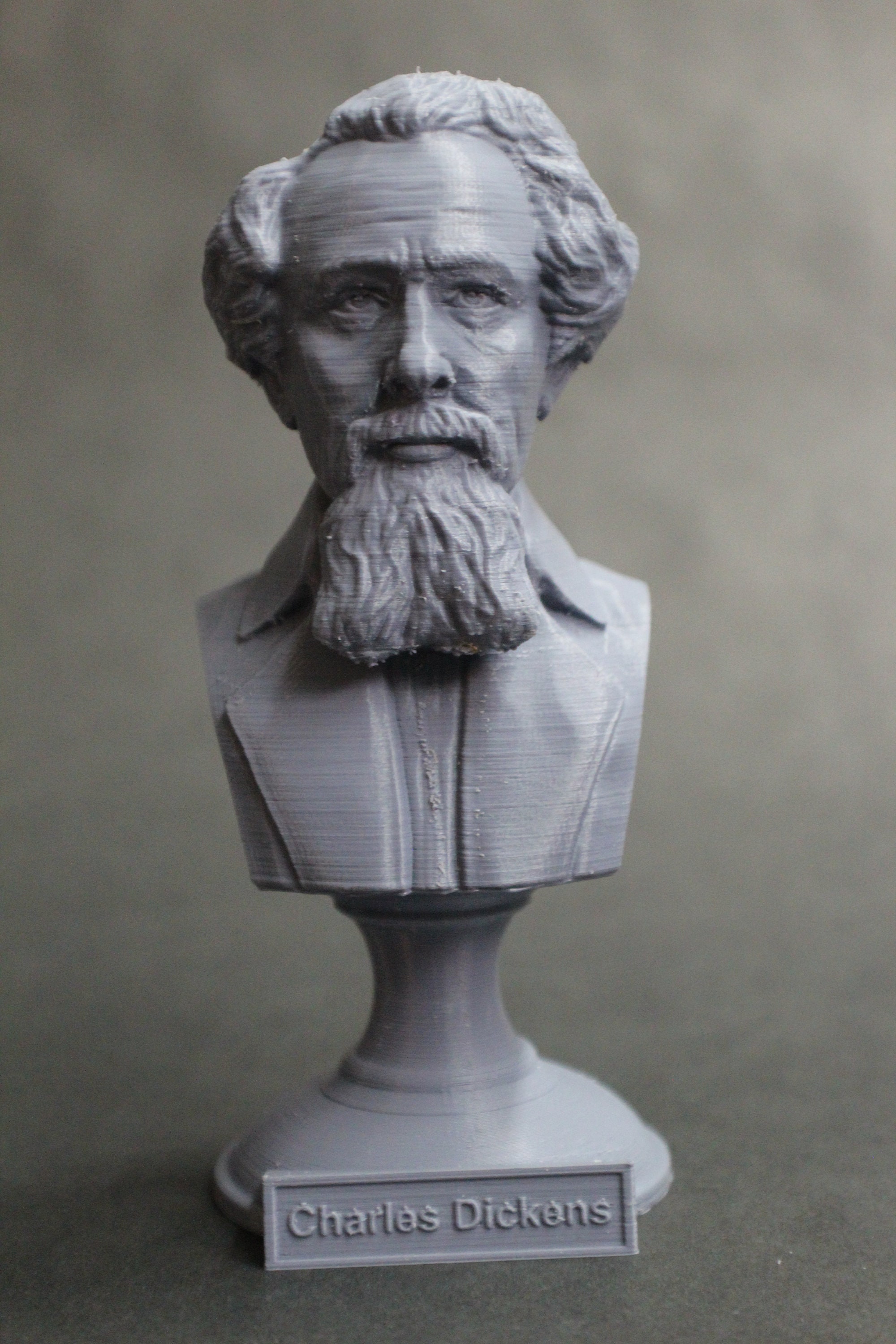 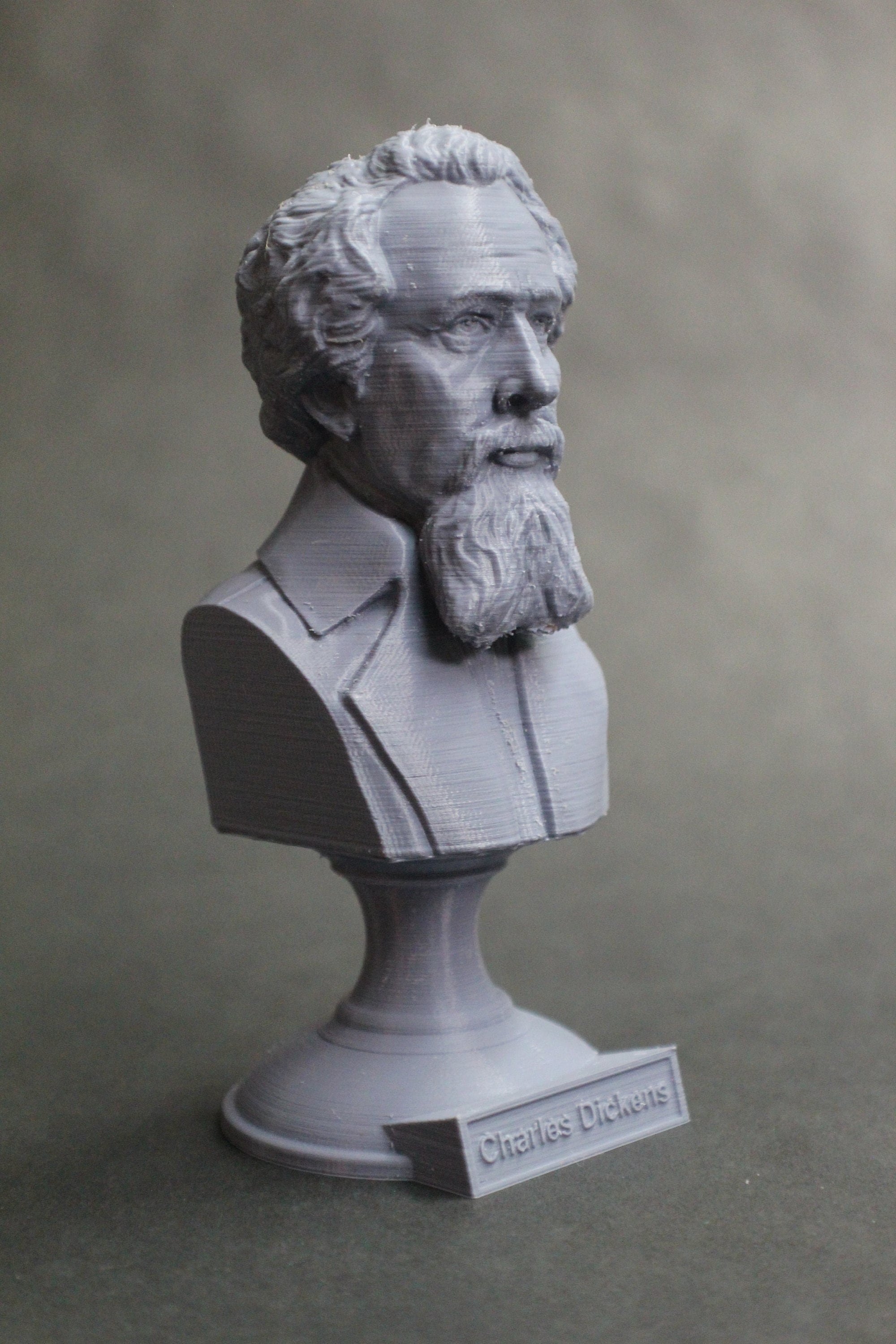 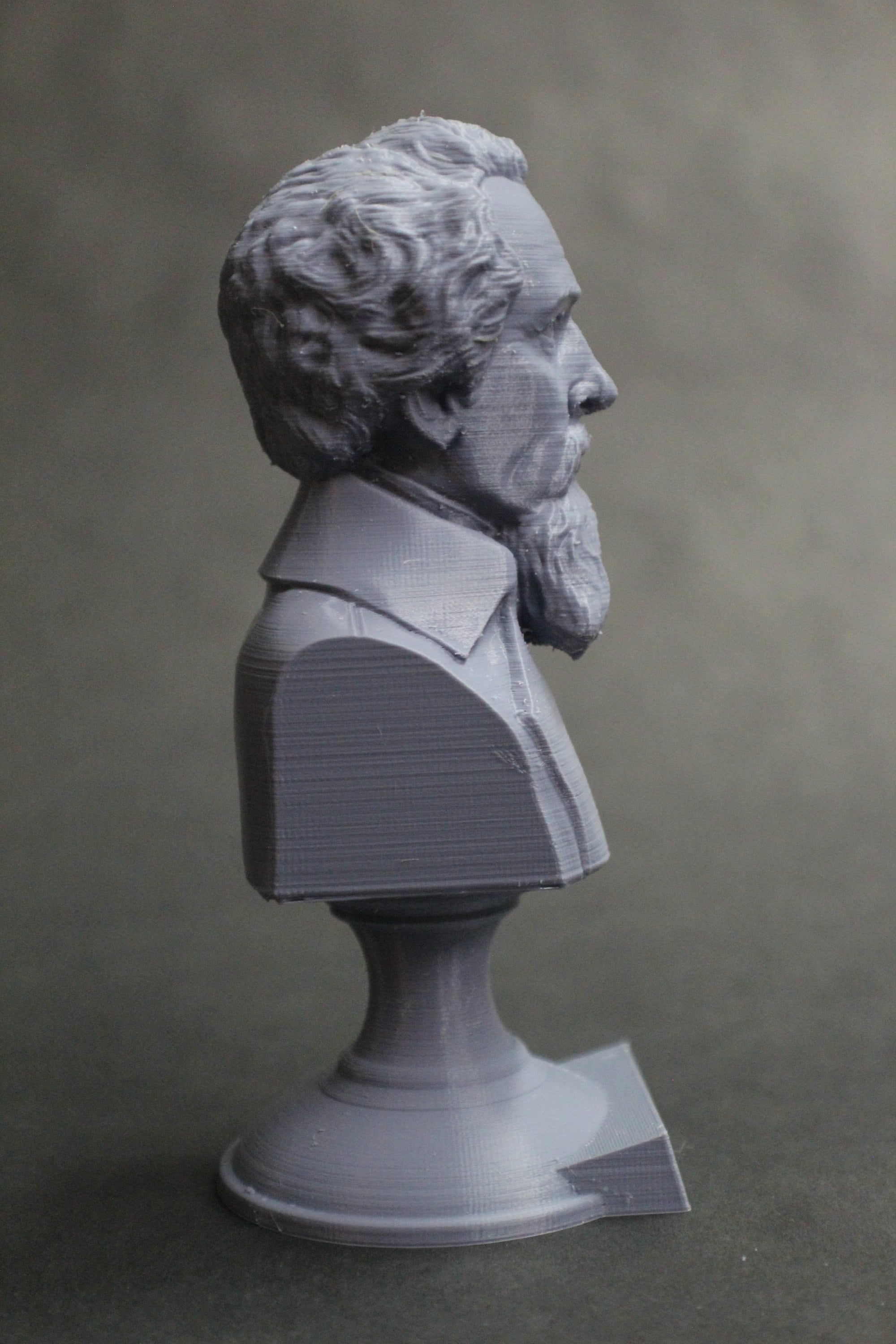 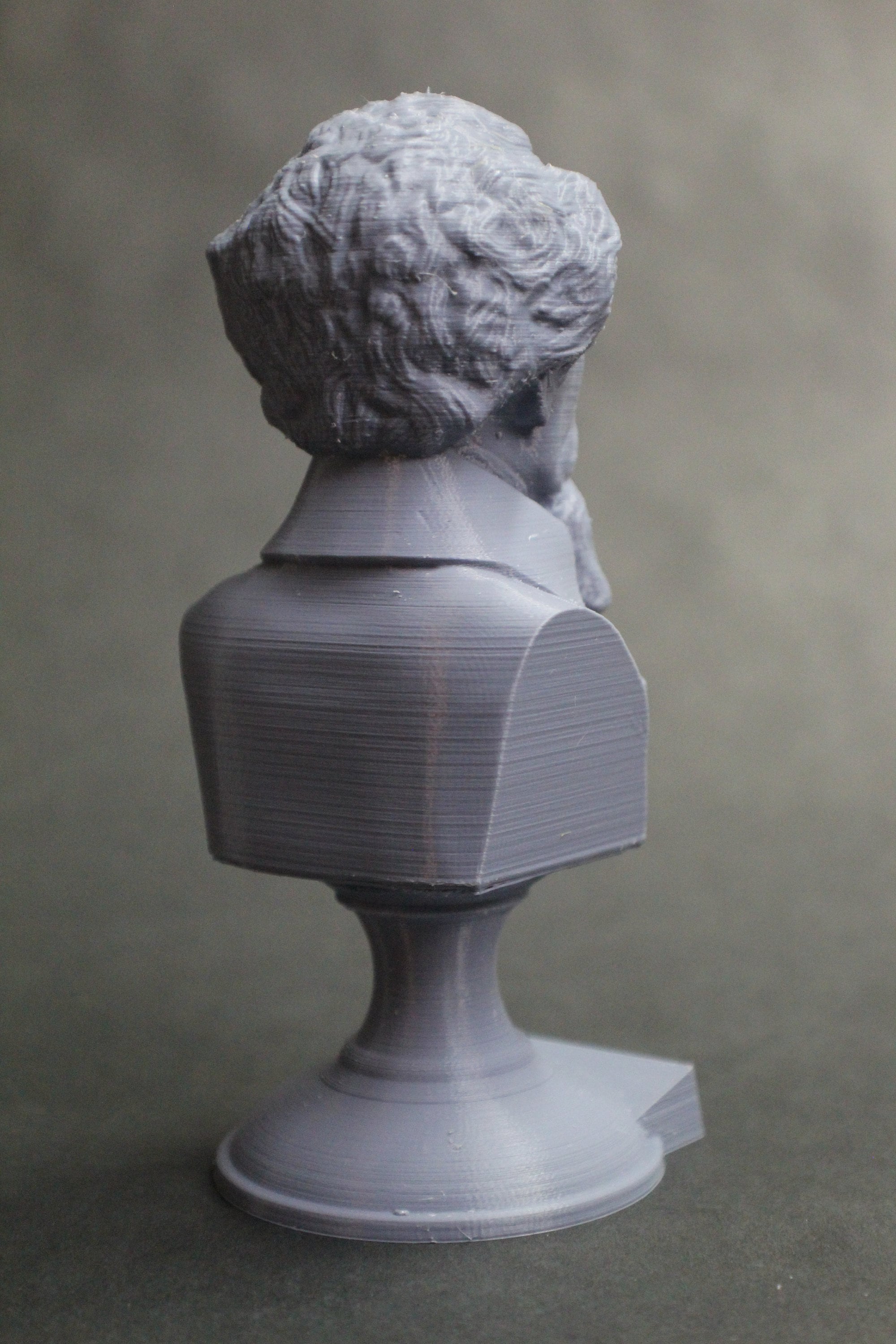 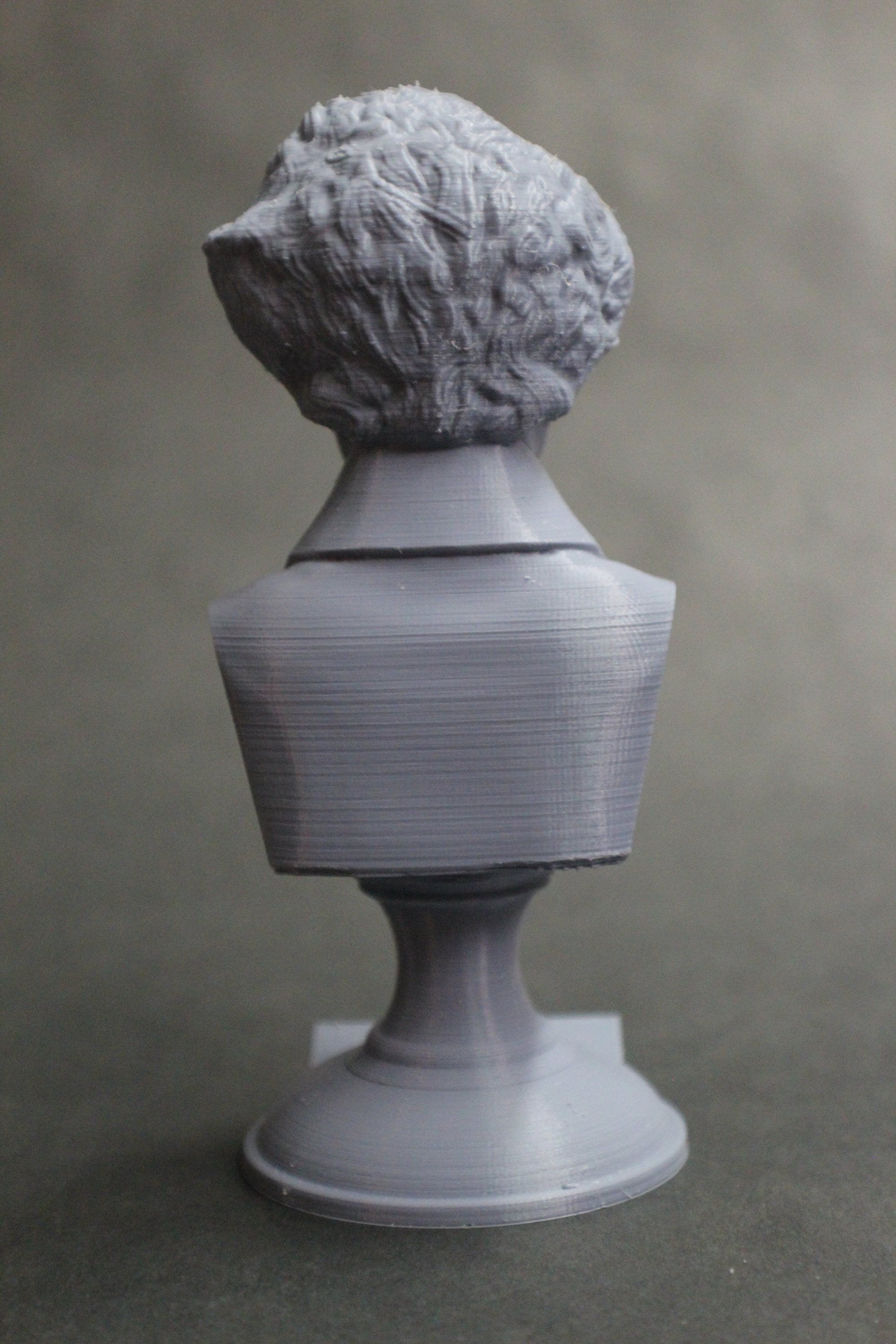 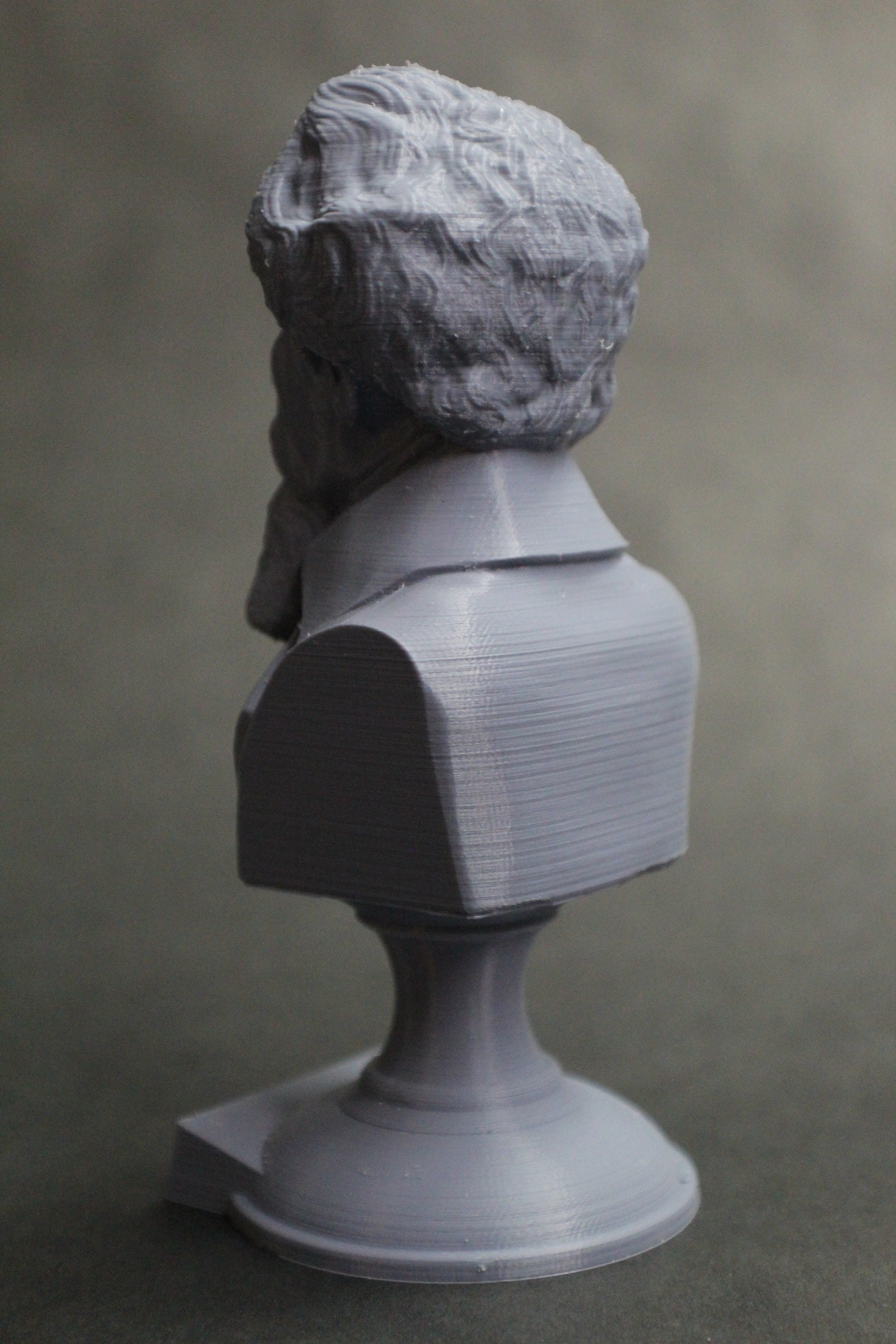 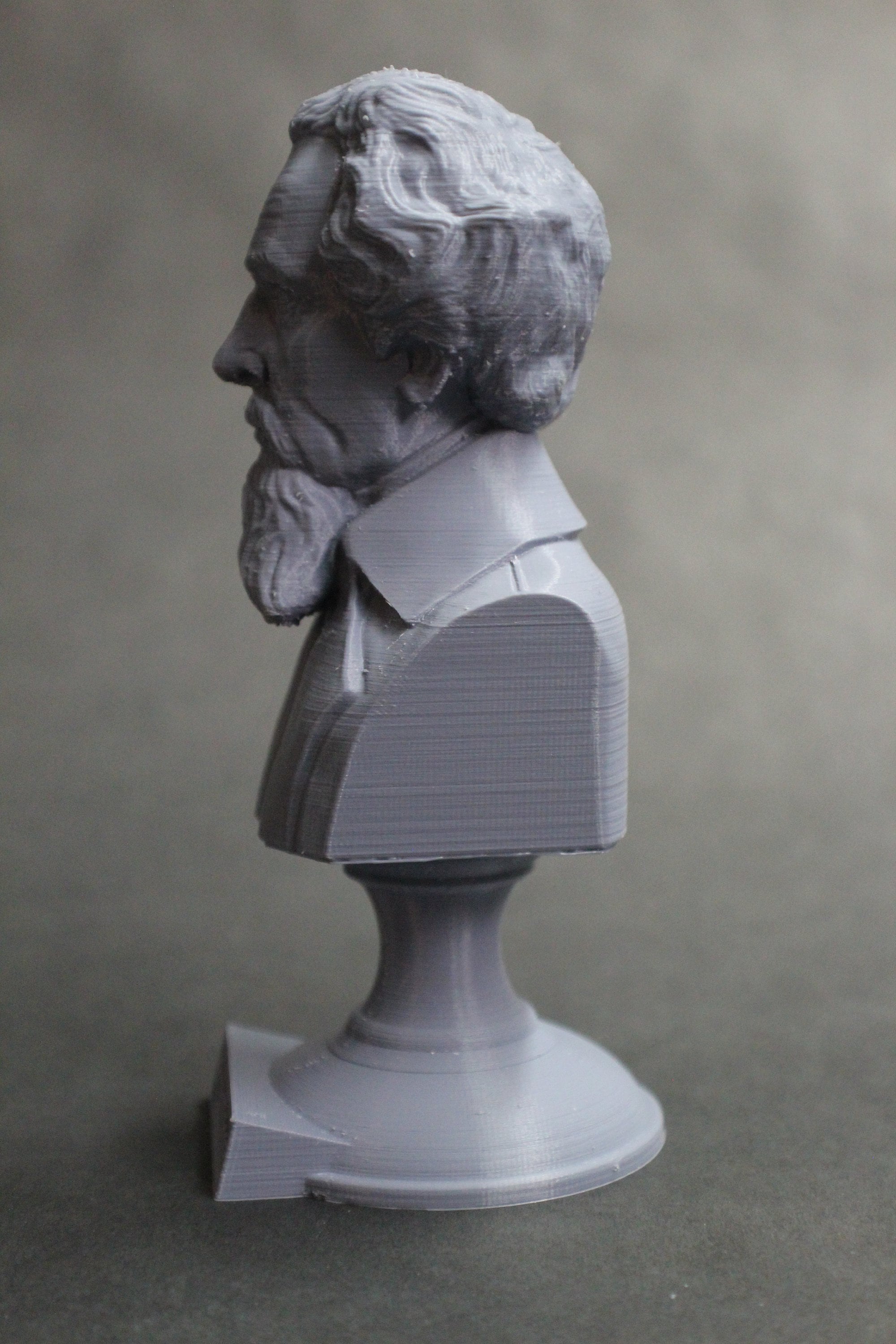 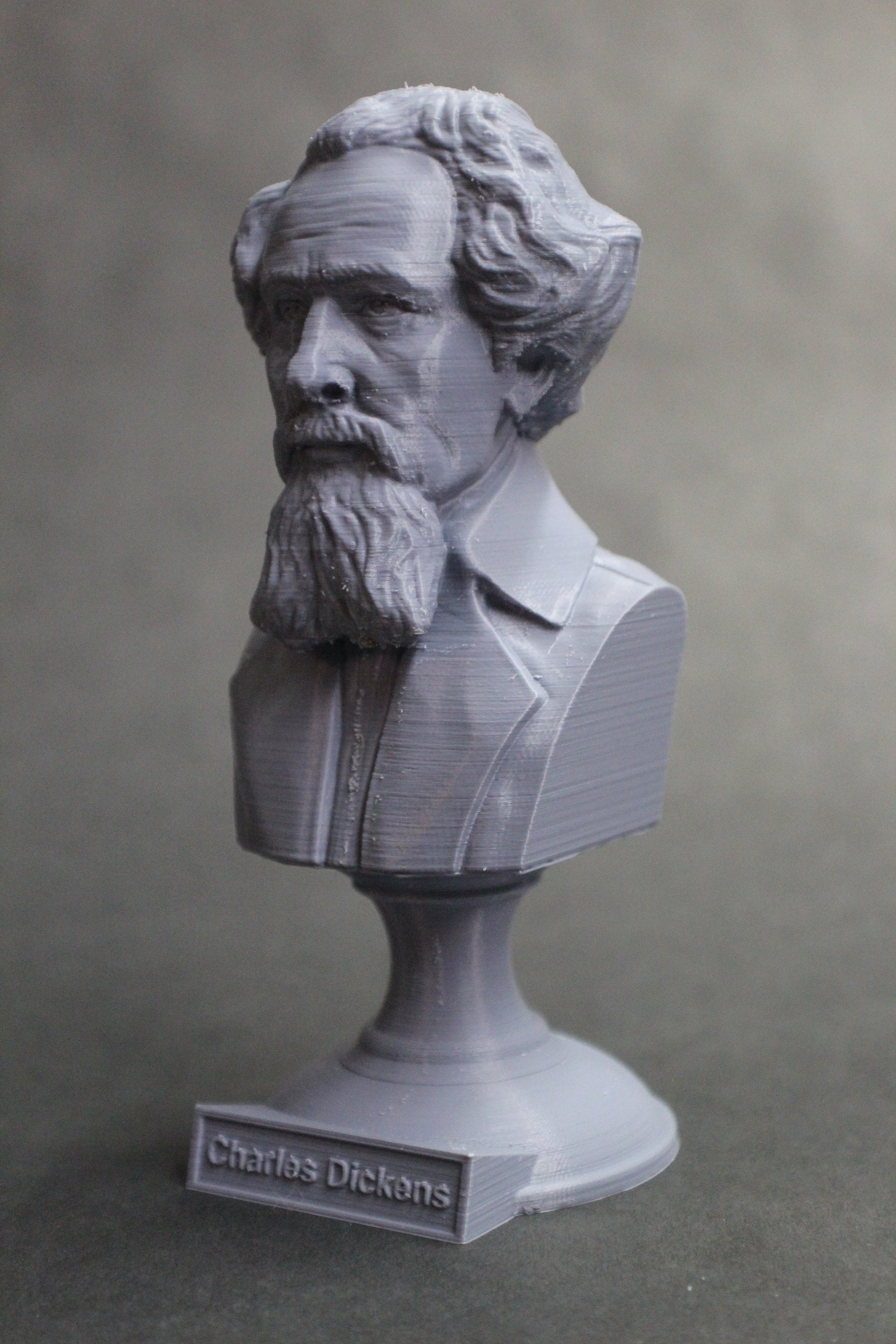 This is a 3D printed bust of Charles Dickens, English Writer and Social Critic. This one is printed in a gray PLA, giving it a detailed look and a surprise whenever someone picks it up to discover it's actual weight. It is more durable than alabaster or plaster, and is washable with lukewarm soapy water for easy spring cleaning. It comes on a custom plinth that has his name on the front.

Charles John Huffam Dickens was an English writer and social critic. He created some of the world's best-known fictional characters and is regarded by many as the greatest novelist of the Victorian era. His works enjoyed unprecedented popularity during his lifetime, and by the 20th century critics and scholars had recognized him as a literary genius. His novels and short stories are still widely read today.

Born in Portsmouth, Dickens left school to work in a factory when his father was incarcerated in a debtors' prison. Despite his lack of formal education, he edited a weekly journal for 20 years, wrote 15 novels, five novellas, hundreds of short stories and non-fiction articles, lectured and performed readings extensively, was an indefatigable letter writer, and campaigned vigorously for children's rights, education, and other social reforms.

Dickens's literary success began with the 1836 serial publication of The Pickwick Papers. Within a few years he had become an international literary celebrity, famous for his humor, satire, and keen observation of character and society. His novels, most published in monthly or weekly installments, pioneered the serial publication of narrative fiction, which became the dominant Victorian mode for novel publication. Cliffhanger endings in his serial publications kept readers in suspense. The installment format allowed Dickens to evaluate his audience's reaction, and he often modified his plot and character development based on such feedback. For example, when his wife's chiropodist expressed distress at the way Miss Mowcher in David Copperfield seemed to reflect her disabilities, Dickens improved the character with positive features. His plots were carefully constructed, and he often wove elements from topical events into his narratives. Masses of the illiterate poor chipped in ha'pennies to have each new monthly episode read to them, opening up and inspiring a new class of readers.

His 1843 novella A Christmas Carol remains especially popular and continues to inspire adaptations in every artistic genre. Oliver Twist and Great Expectations are also frequently adapted and, like many of his novels, evoke images of early Victorian London. His 1859 novel A Tale of Two Cities (set in London and Paris) is his best-known work of historical fiction. Dickens has been praised by many of his fellow writers—from Leo Tolstoy to George Orwell, G. K. Chesterton, and Tom Wolfe—for his realism, comedy, prose style, unique characterizations, and social criticism. However, Oscar Wilde, Henry James, and Virginia Woolf complained of a lack of psychological depth, loose writing, and a vein of sentimentalism.

The term Dickensian is used to describe something that is reminiscent of Dickens and his writings, such as poor social conditions or comically repulsive characters.

As with my other review here, I will be receiving this as a gift, so I can't really review it. But it shipped really fast and my husband says it looks great and was very well packed. Thank you for having Dickens as one of the figures in your shop! I was so pleased to see him there and can't wait to add this figure to my collection.