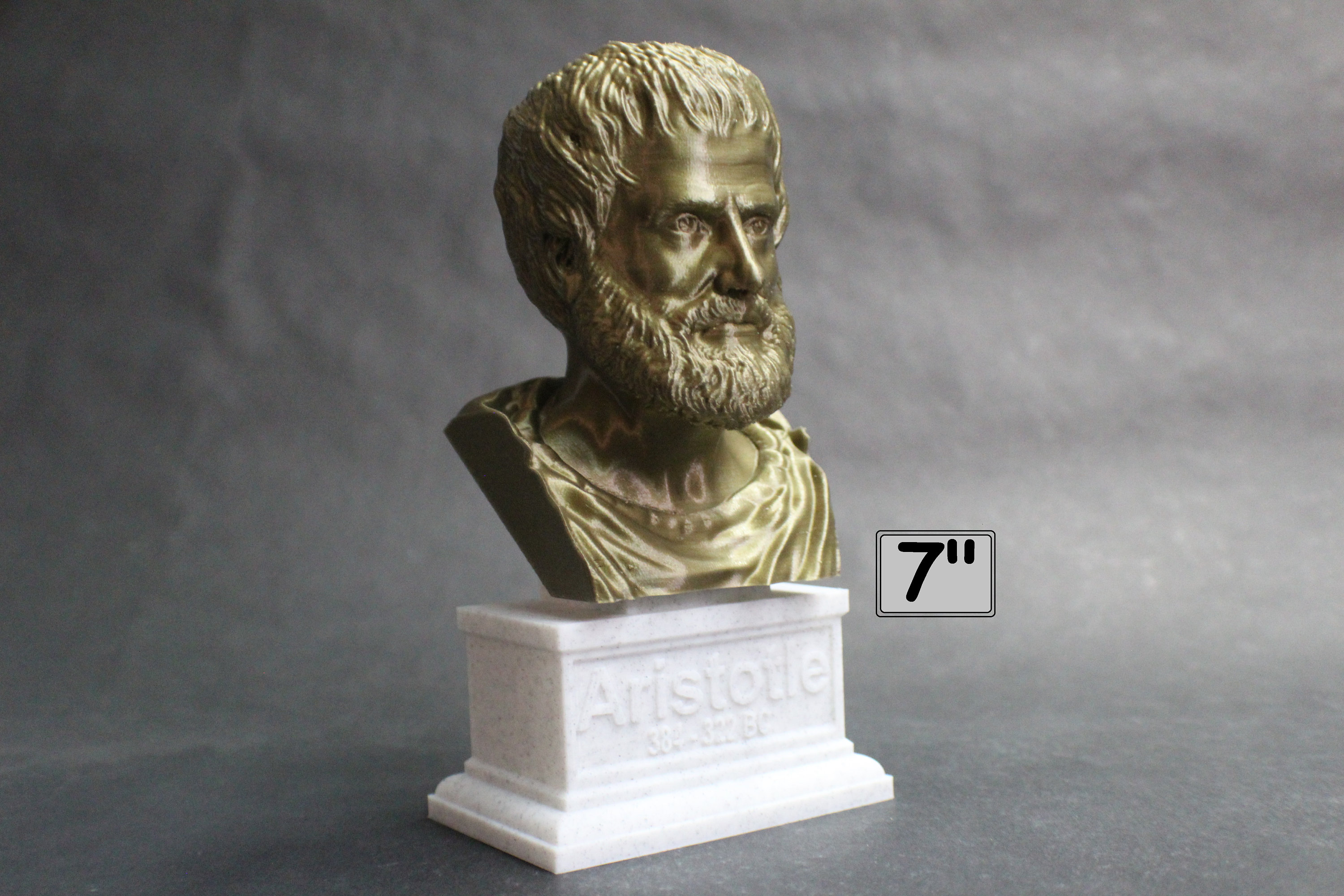 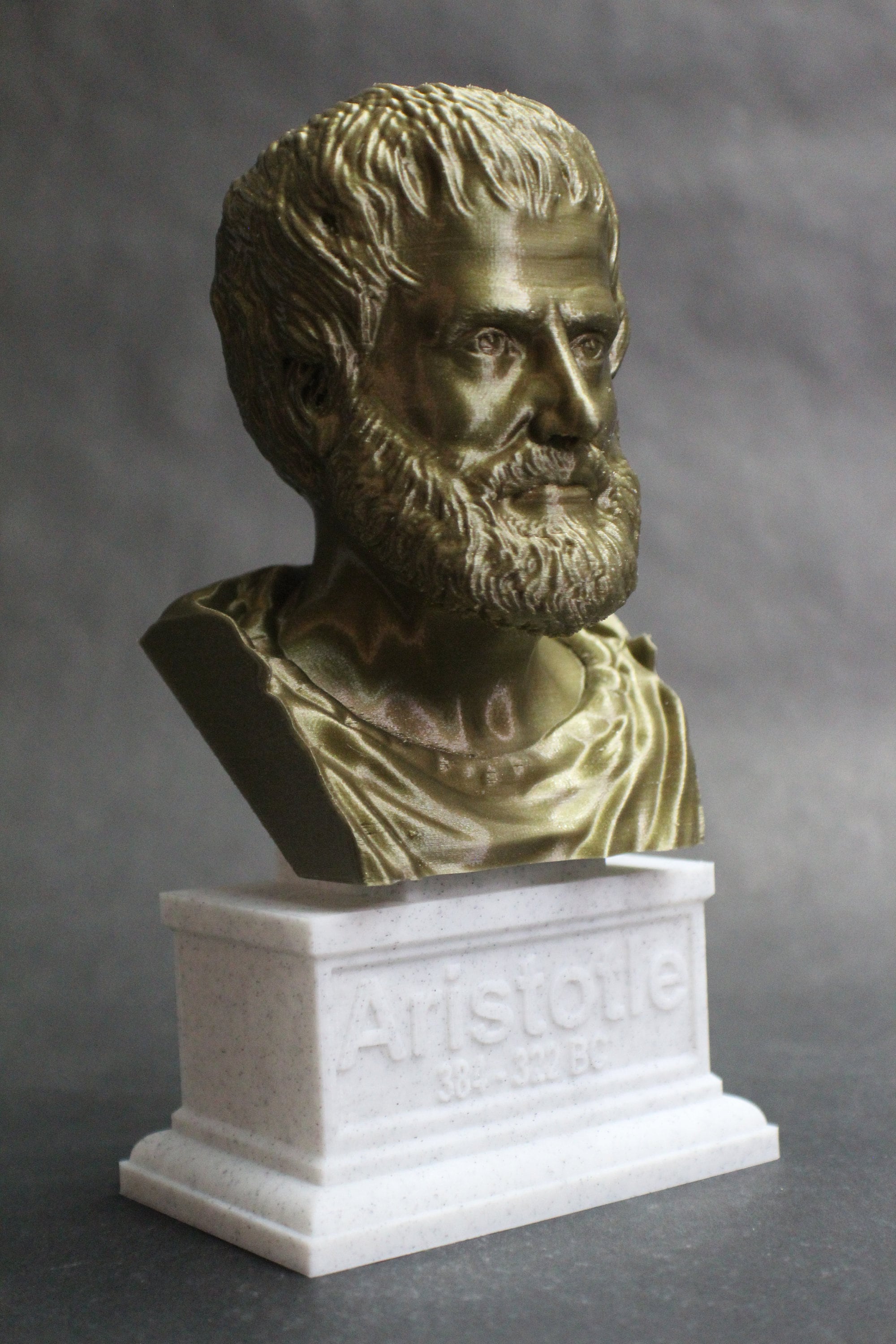 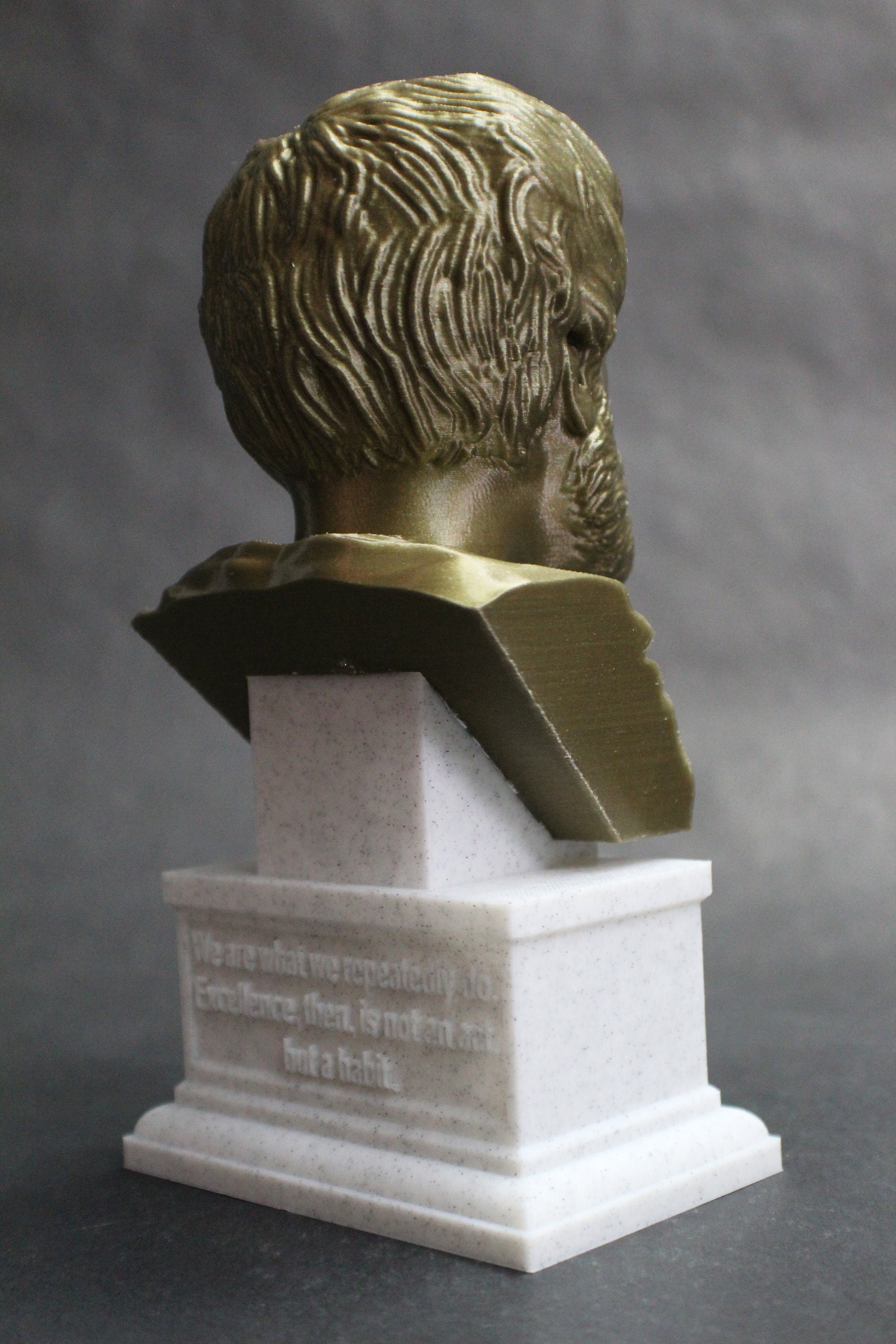 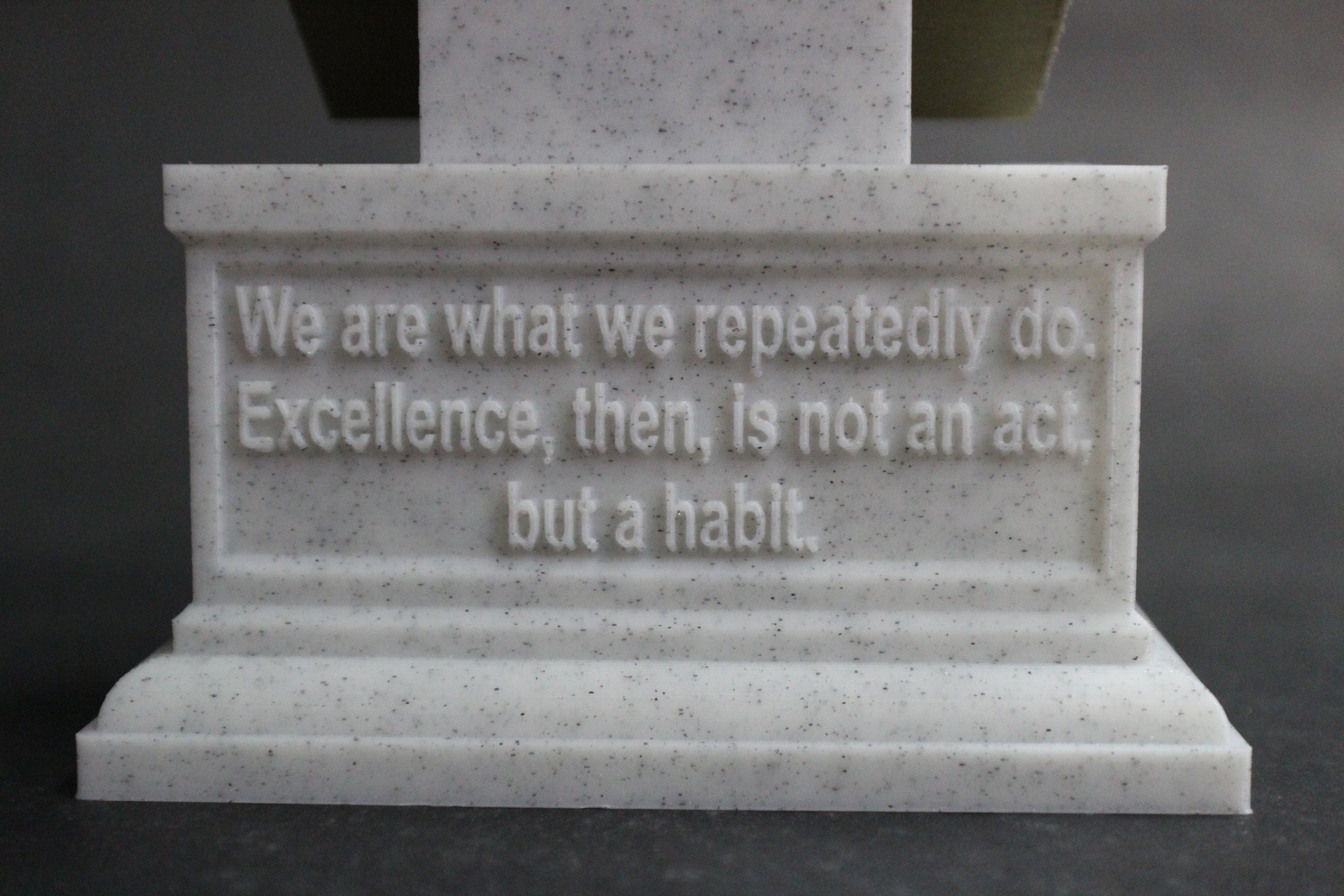 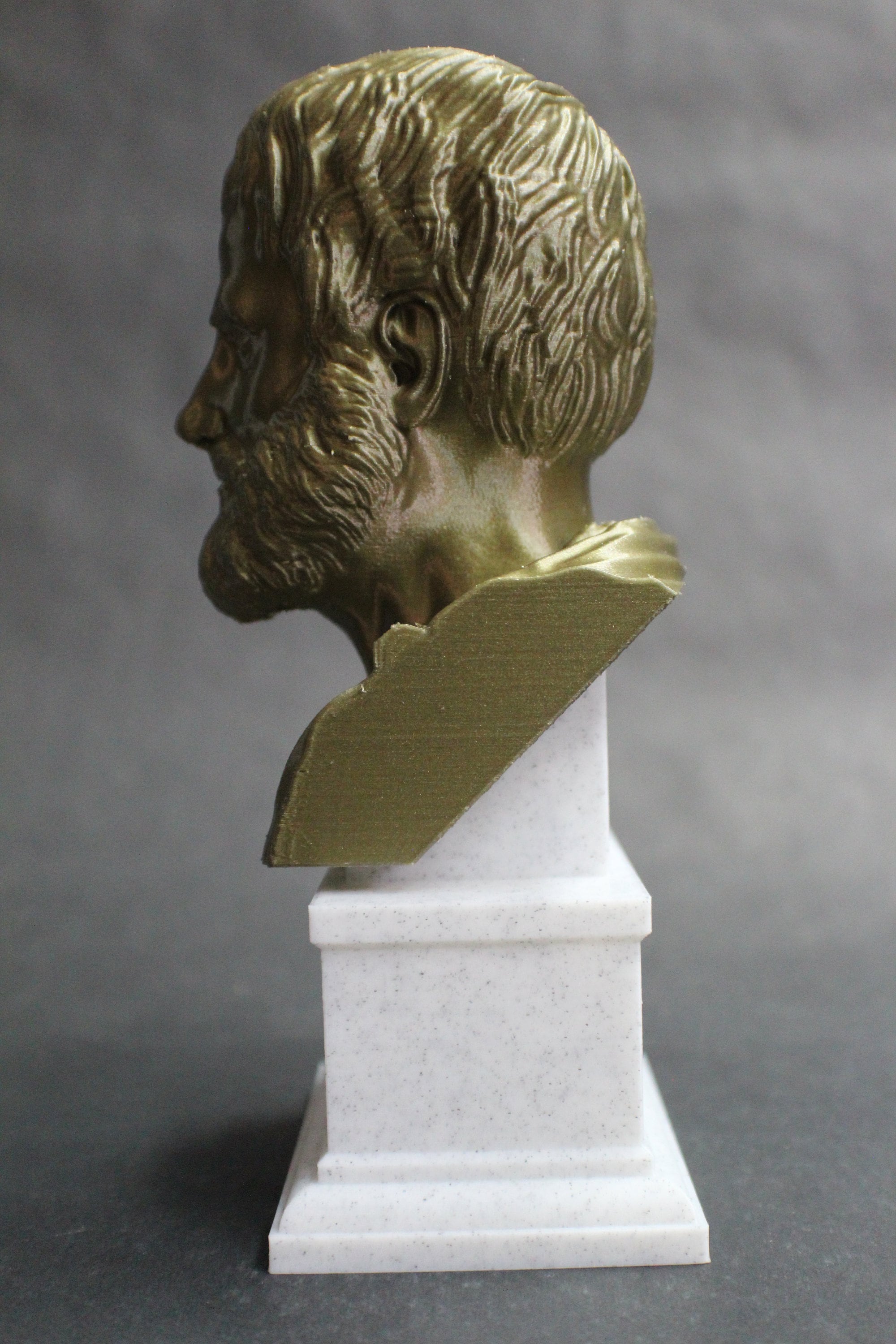 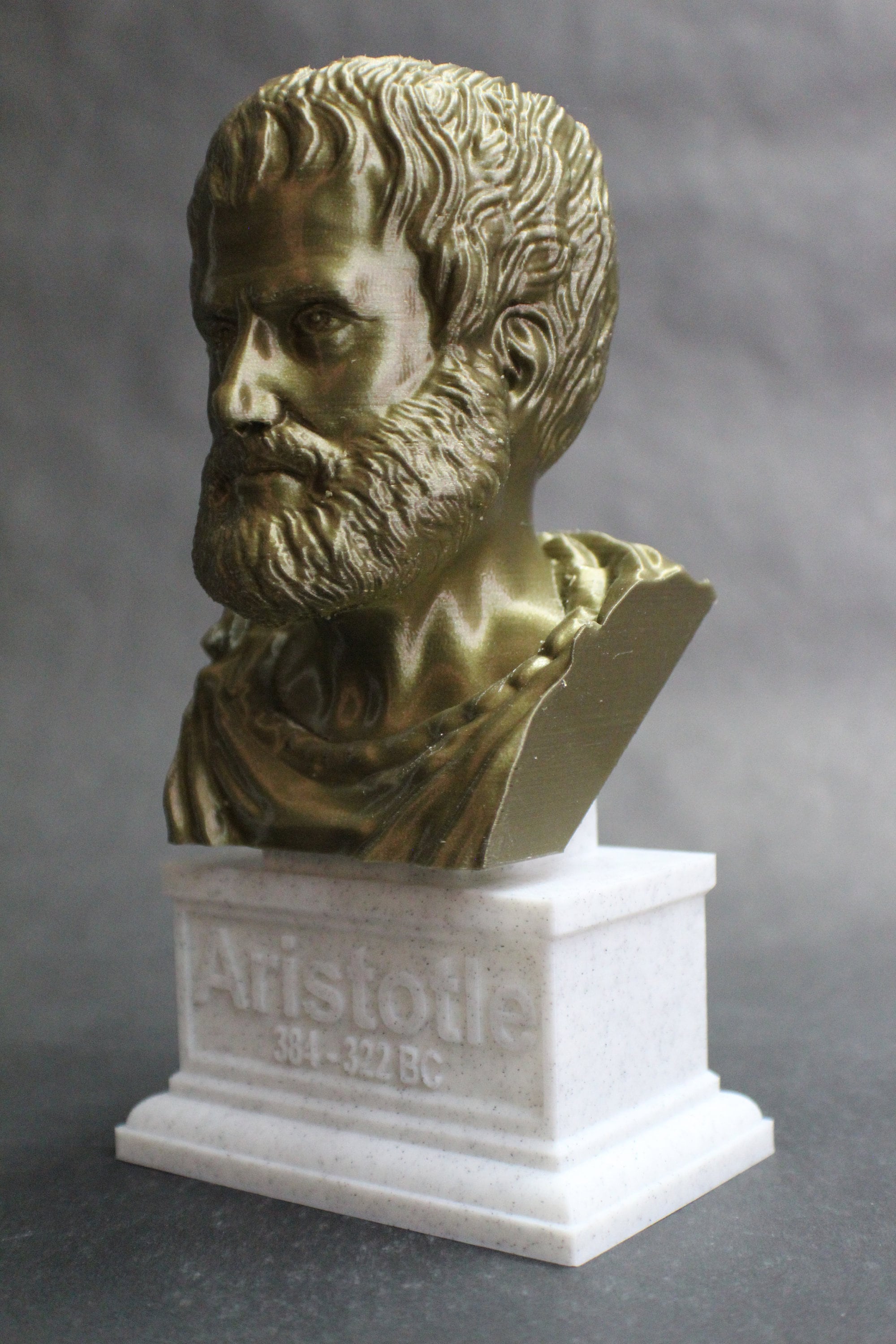 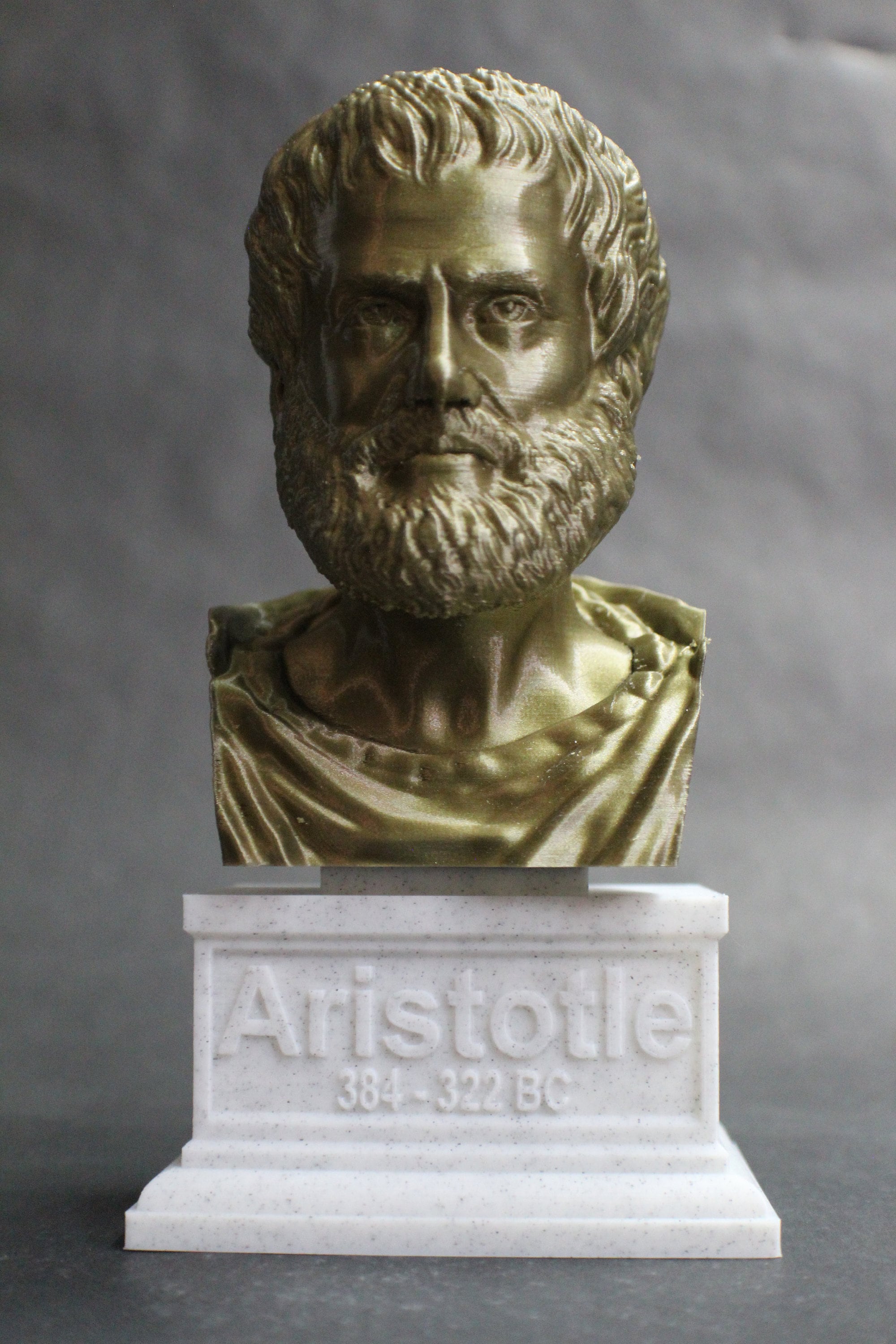 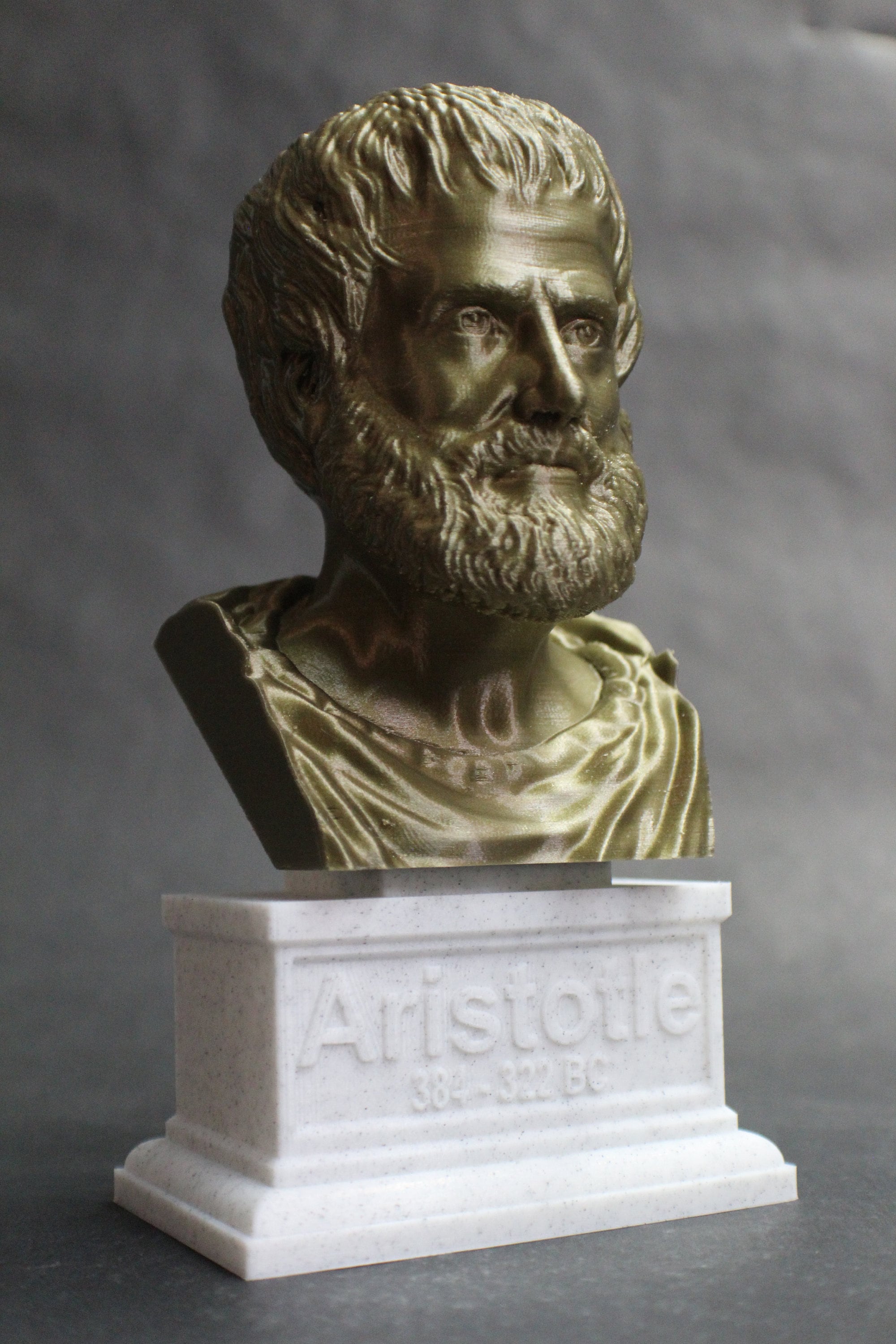 This 3D printed bust of Aristotle Greek Philosopher. This one is printed in a marble and bronze PLA, giving it a realistic stone look and a surprise whenever someone picks it up to discover it's actual weight. It is more durable than alabaster or plaster, and is washable with lukewarm soapy water for easy spring cleaning. It comes on a custom plinth that has his lifetime on the front, and the quote:

"We are what we repeatedly do. Excellence, then, is not an act, but a habit."

Aristotle (384–322 BC) was a Greek philosopher during the Classical period in Ancient Greece, the founder of the Lyceum and the Peripatetic school of philosophy and Aristotelian tradition. Along with his teacher Plato, he has been called the "Father of Western Philosophy". His writings cover many subjects – including physics, biology, zoology, metaphysics, logic, ethics, aesthetics, poetry, theatre, music, rhetoric, psychology, linguistics, economics, politics and government. Aristotle provided a complex synthesis of the various philosophies existing prior to him, and it was above all from his teachings that the West inherited its intellectual lexicon, as well as problems and methods of inquiry. As a result, his philosophy has exerted a unique influence on almost every form of knowledge in the West and it continues to be a subject of contemporary philosophical discussion.

Little is known about his life. Aristotle was born in the city of Stagira in Northern Greece. His father, Nicomachus, died when Aristotle was a child, and he was brought up by a guardian. At seventeen or eighteen years of age, he joined Plato's Academy in Athens and remained there until the age of thirty-seven (c. 347 BC).[4] Shortly after Plato died, Aristotle left Athens and, at the request of Philip II of Macedon, tutored Alexander the Great beginning in 343 BC. He established a library in the Lyceum which helped him to produce many of his hundreds of books on papyrus scrolls. Though Aristotle wrote many elegant treatises and dialogues for publication, only around a third of his original output has survived, none of it intended for publication.

Aristotle's views on physical science profoundly shaped medieval scholarship. Their influence extended from Late Antiquity and the Early Middle Ages into the Renaissance, and were not replaced systematically until the Enlightenment and theories such as classical mechanics. Some of Aristotle's zoological observations found in his biology, such as on the hectocotyl (reproductive) arm of the octopus, were disbelieved until the 19th century. His works contain the earliest known formal study of logic, studied by medieval scholars such as Peter Abelard and John Buridan. Aristotle's influence on logic also continued well into the 19th century.

He influenced Islamic thought during the Middle Ages, as well as Christian theology, especially the Neoplatonism of the Early Church and the scholastic tradition of the Catholic Church. Aristotle was revered among medieval Muslim scholars as "The First Teacher" and among medieval Christians like Thomas Aquinas as simply "The Philosopher". His ethics, though always influential, gained renewed interest with the modern advent of virtue ethics, such as in the thinking of Alasdair MacIntyre and Philippa Foot.