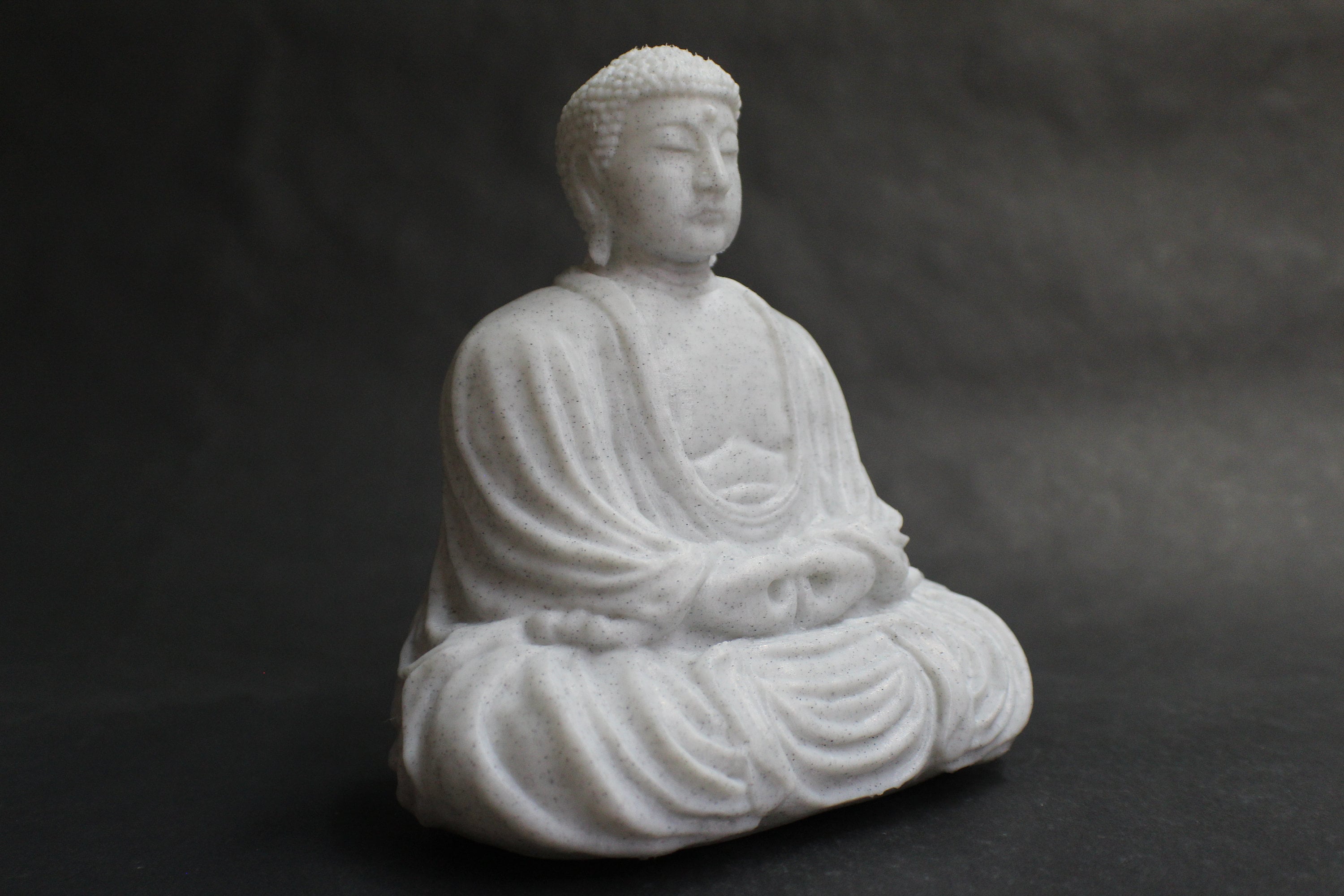 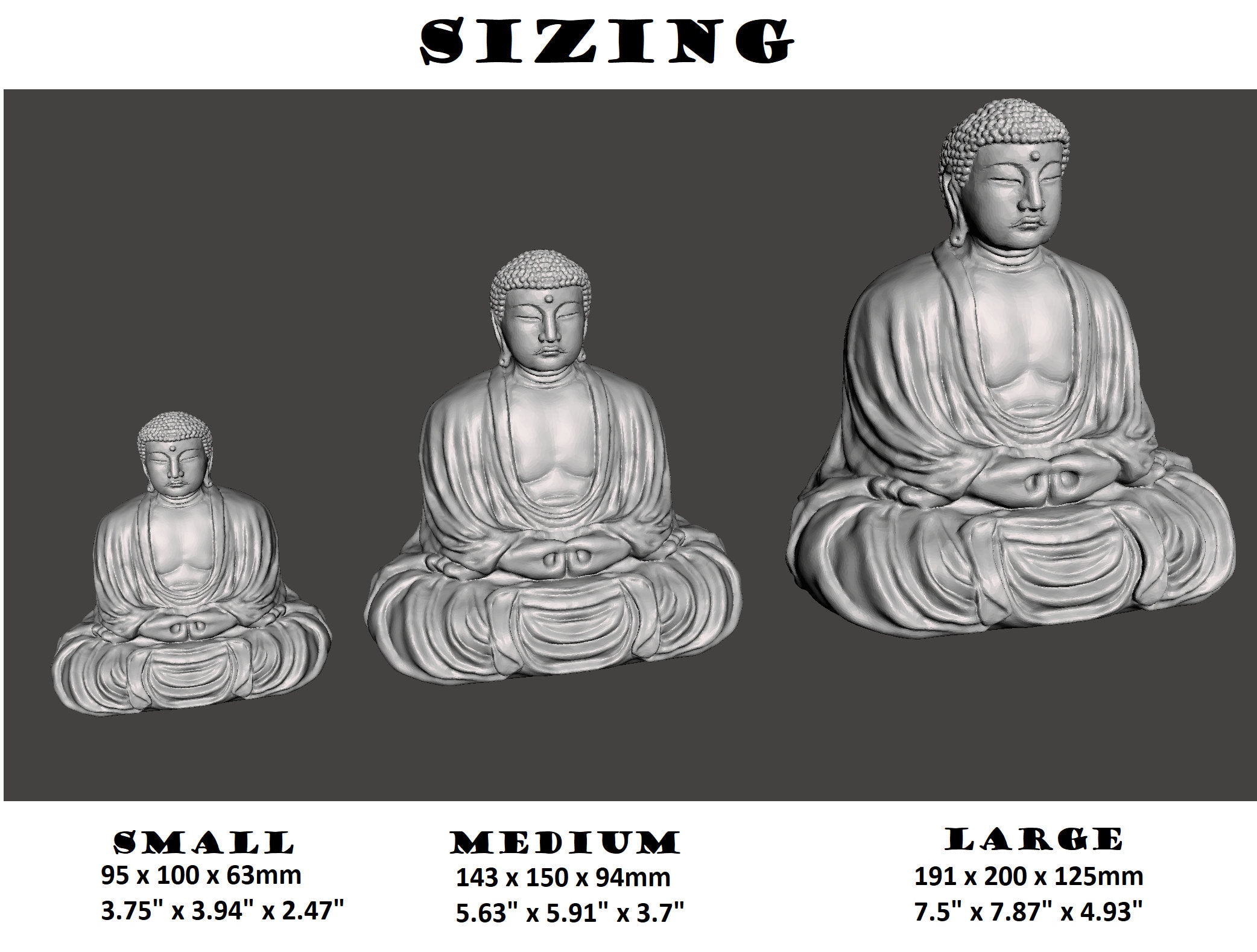 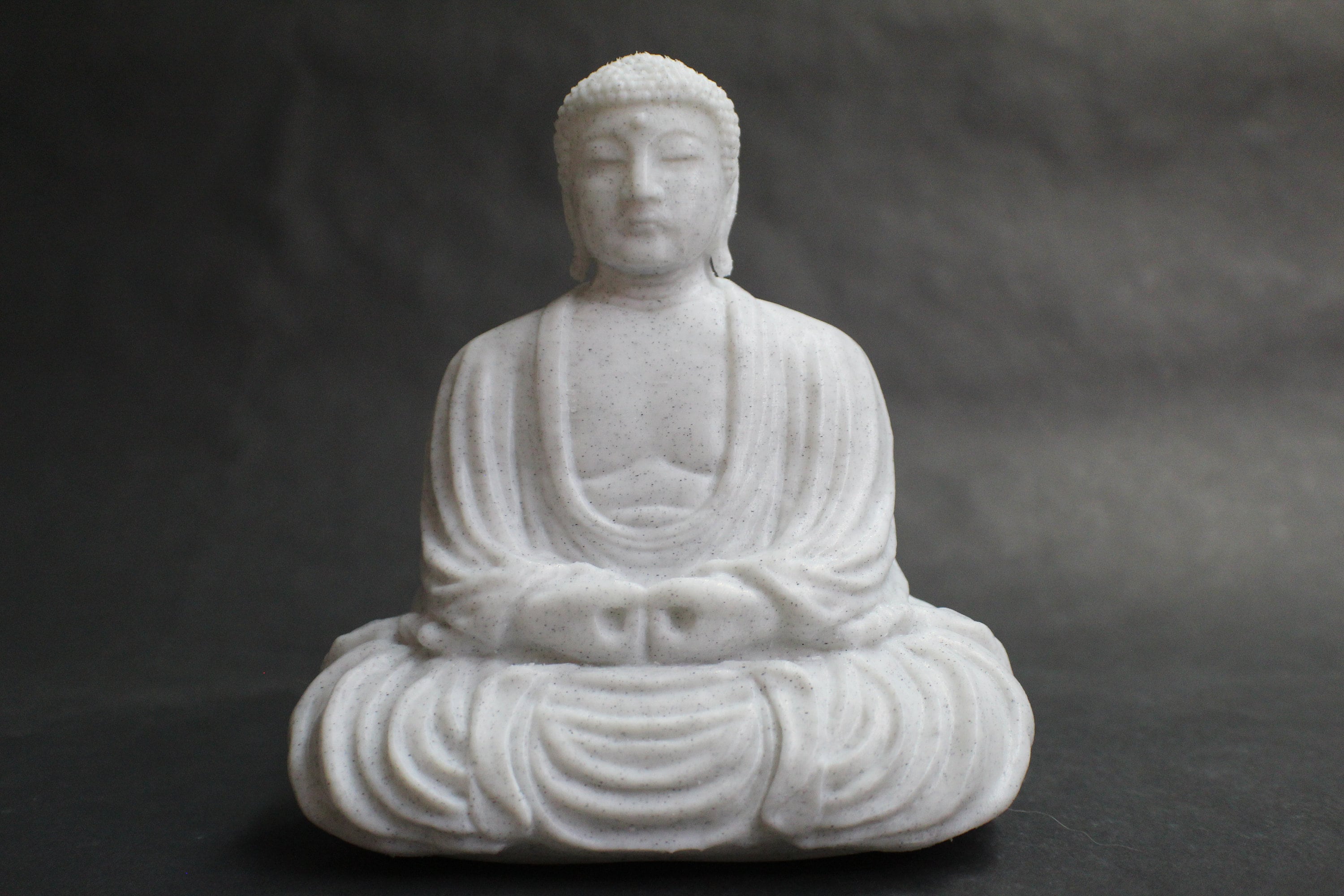 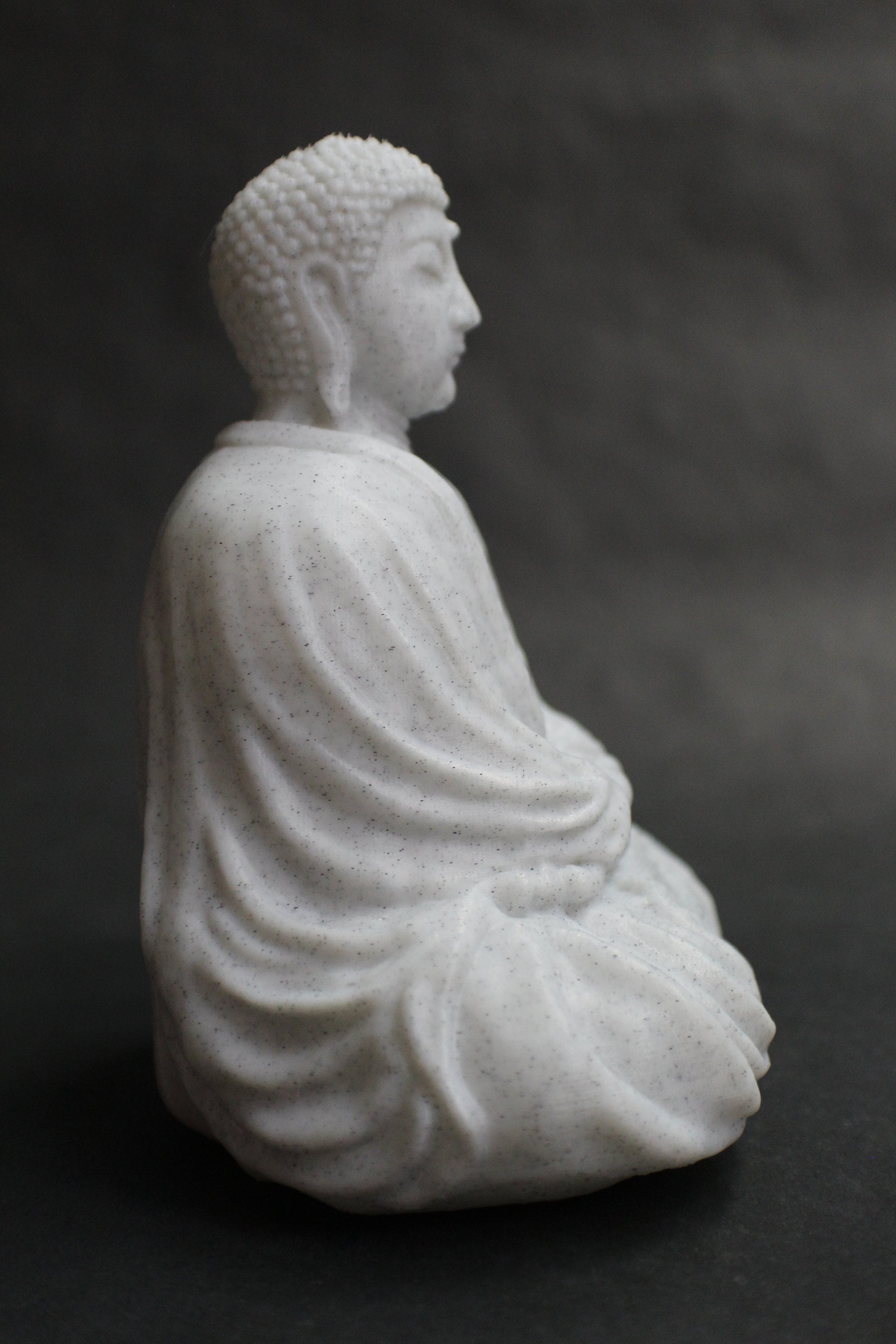 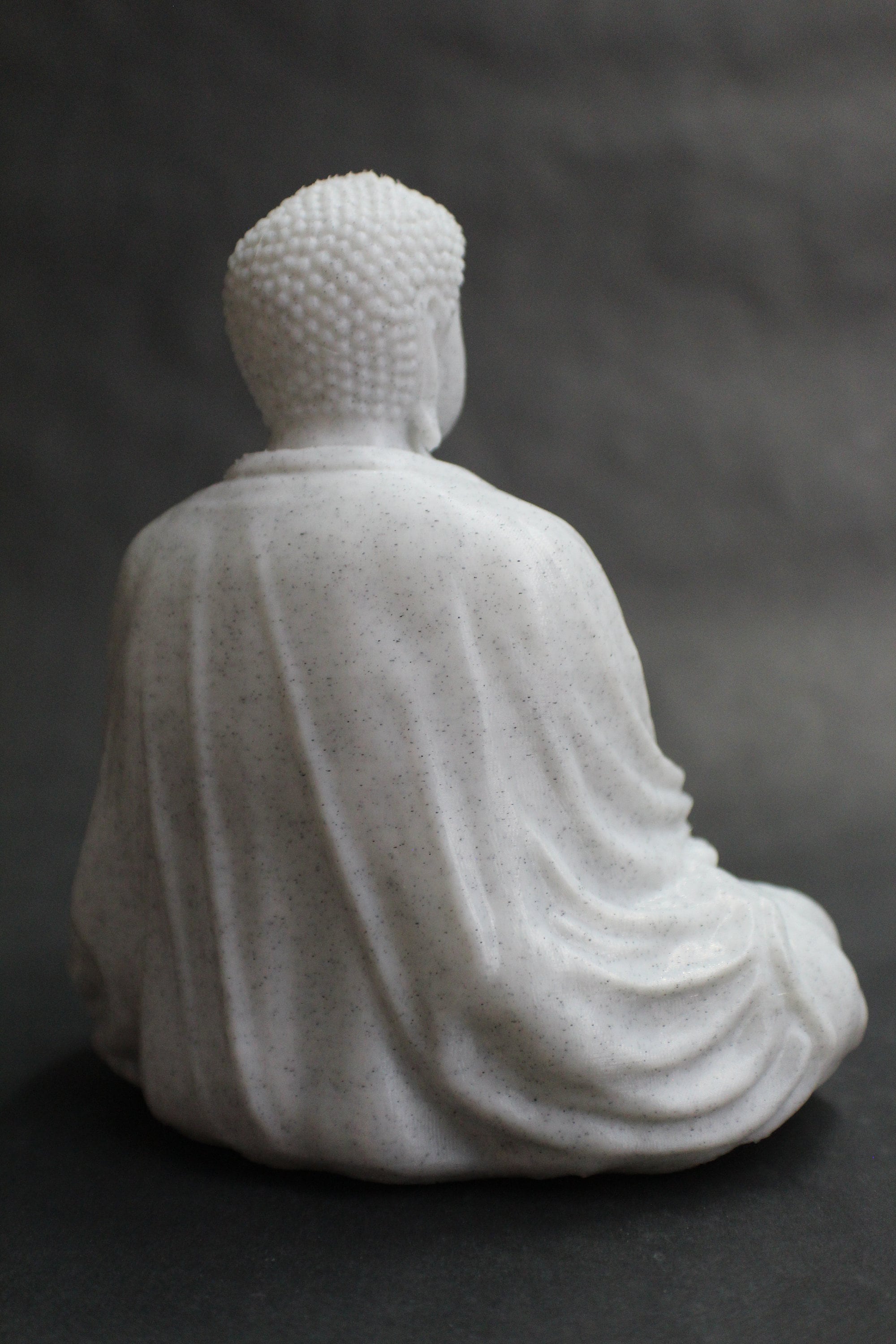 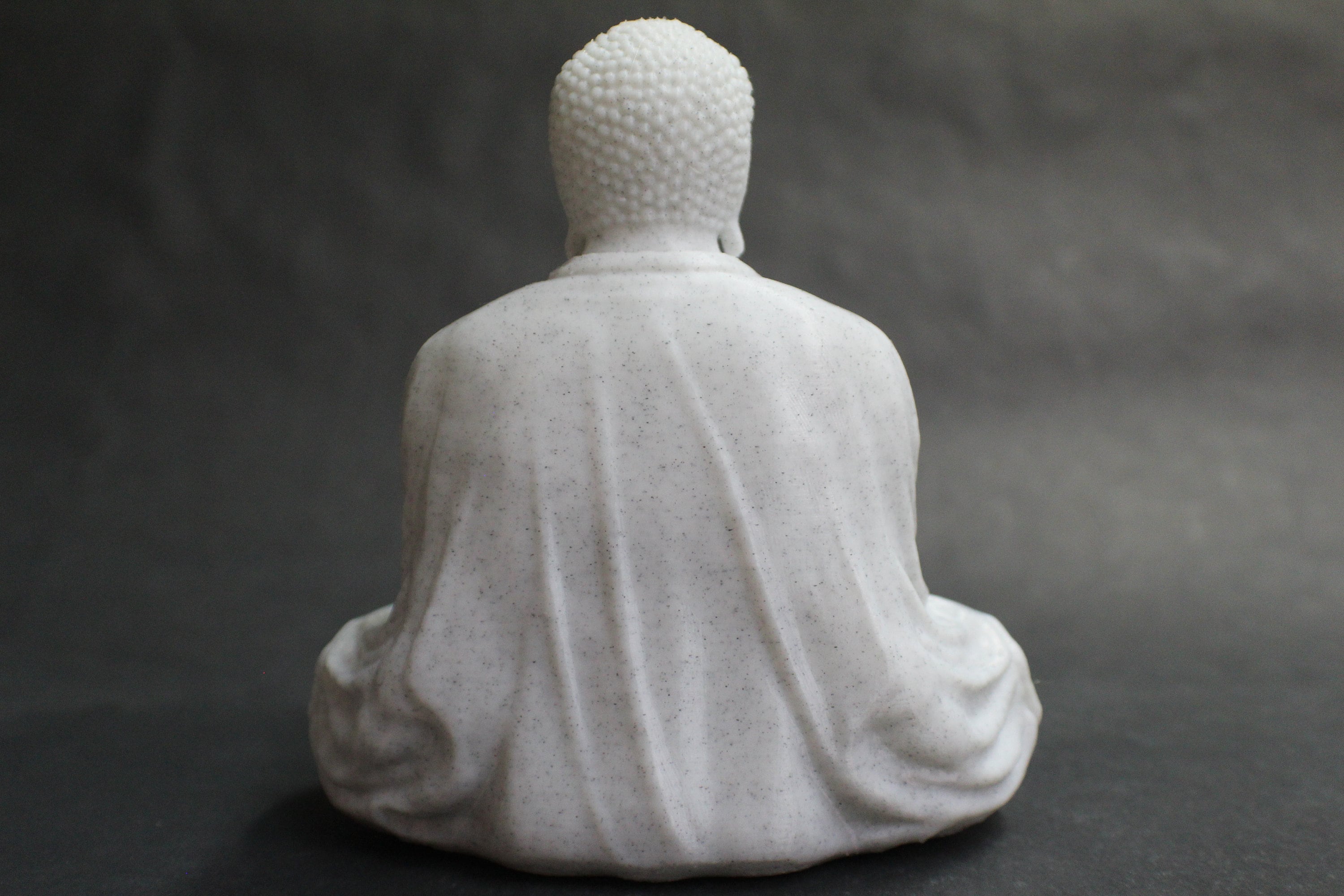 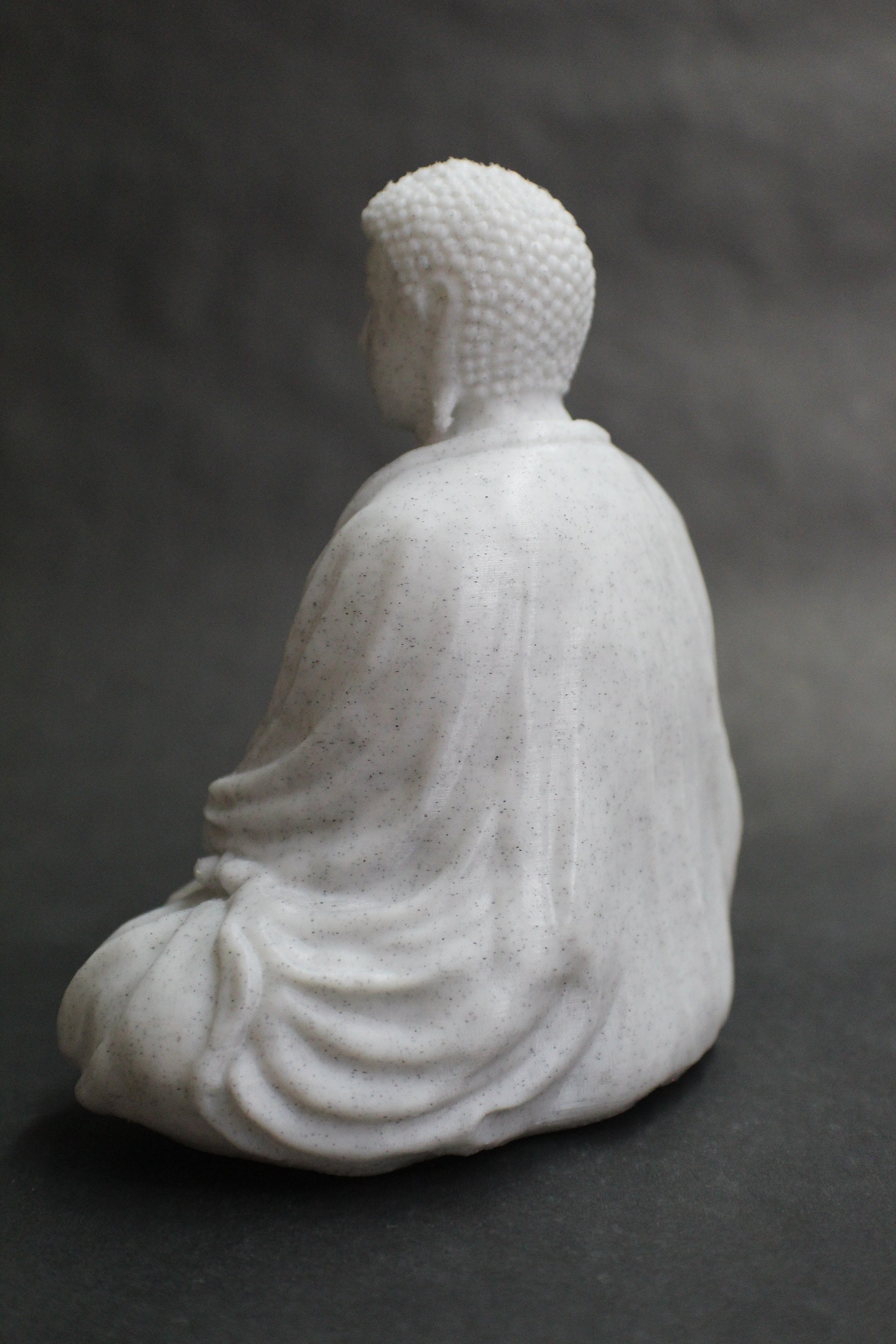 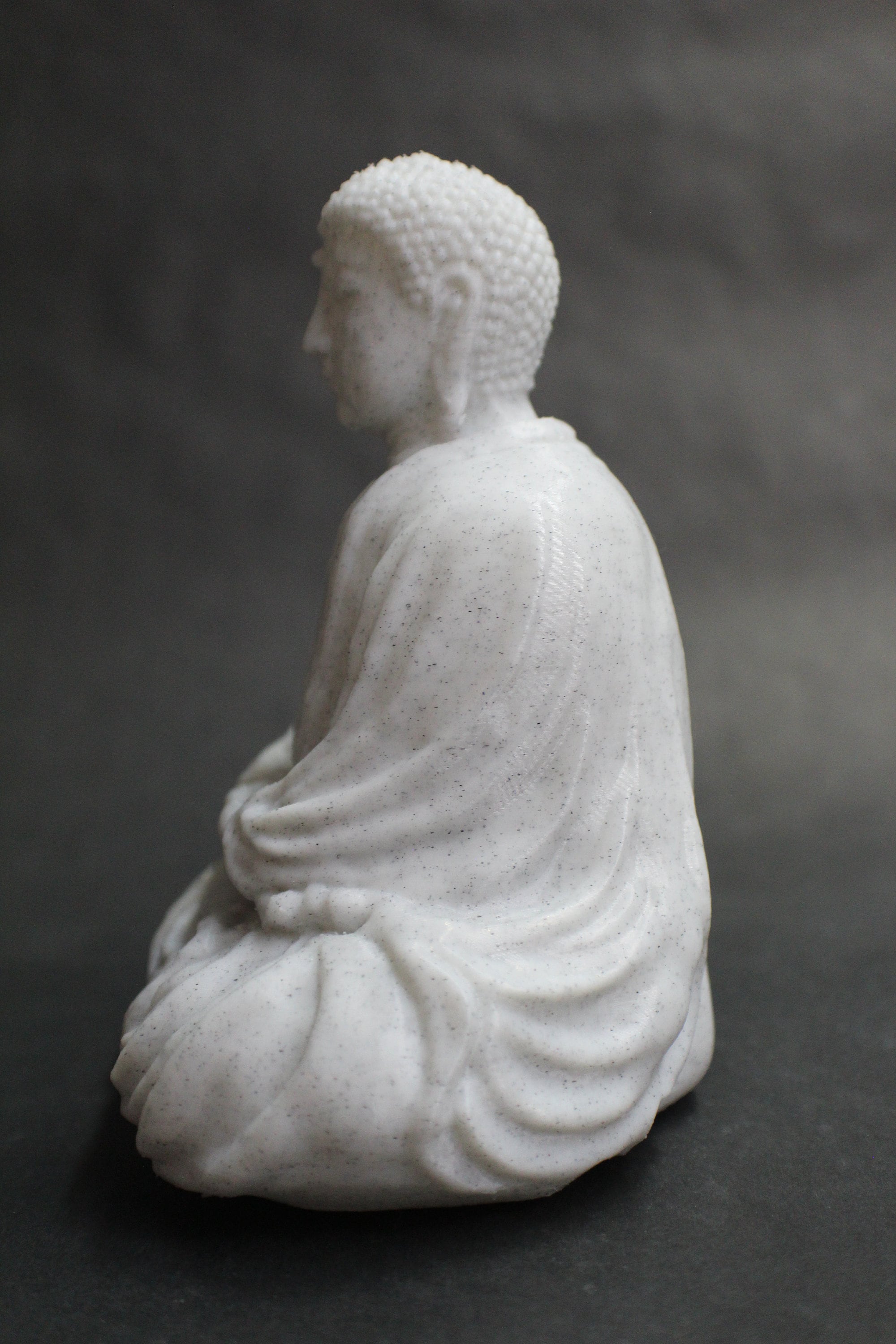 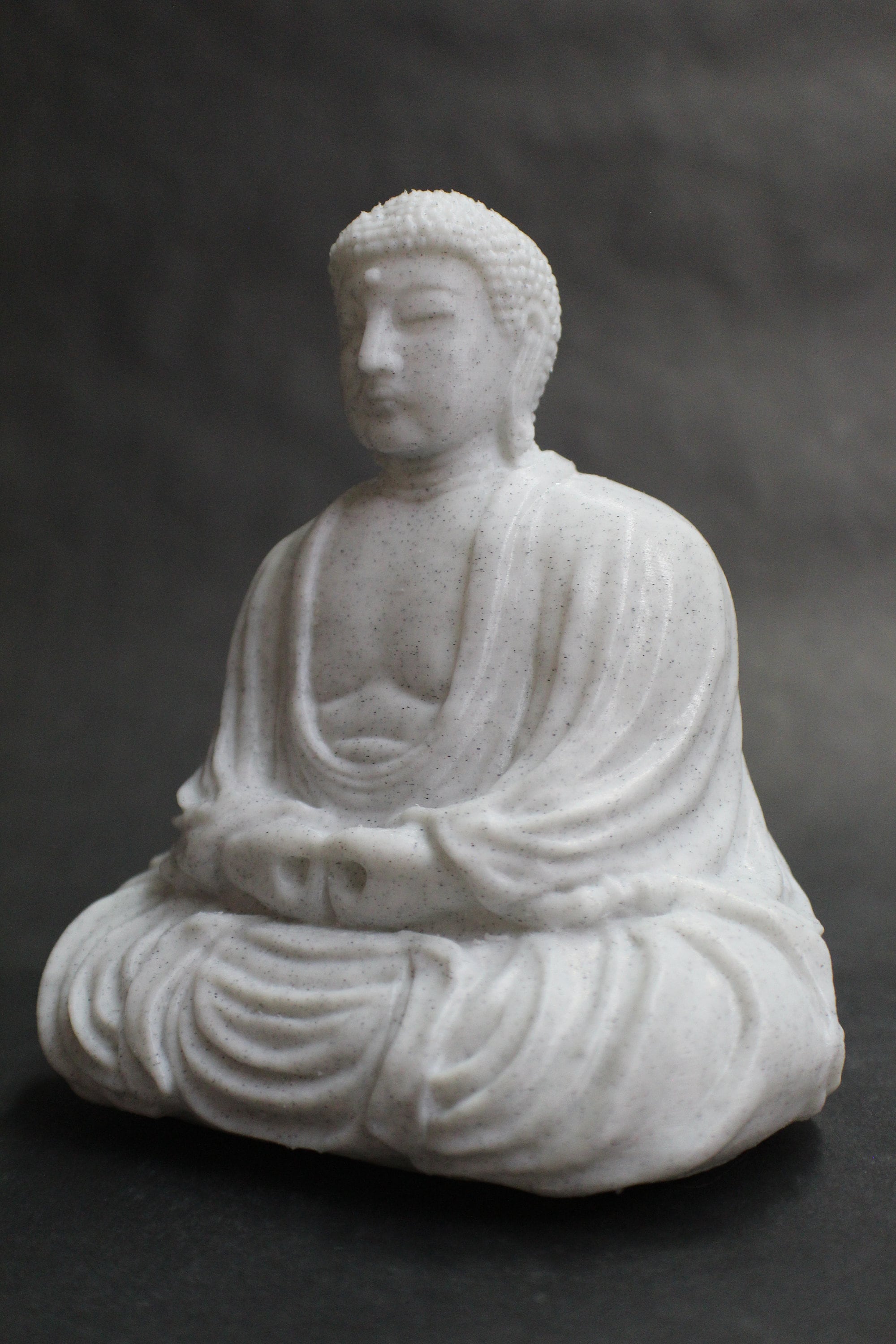 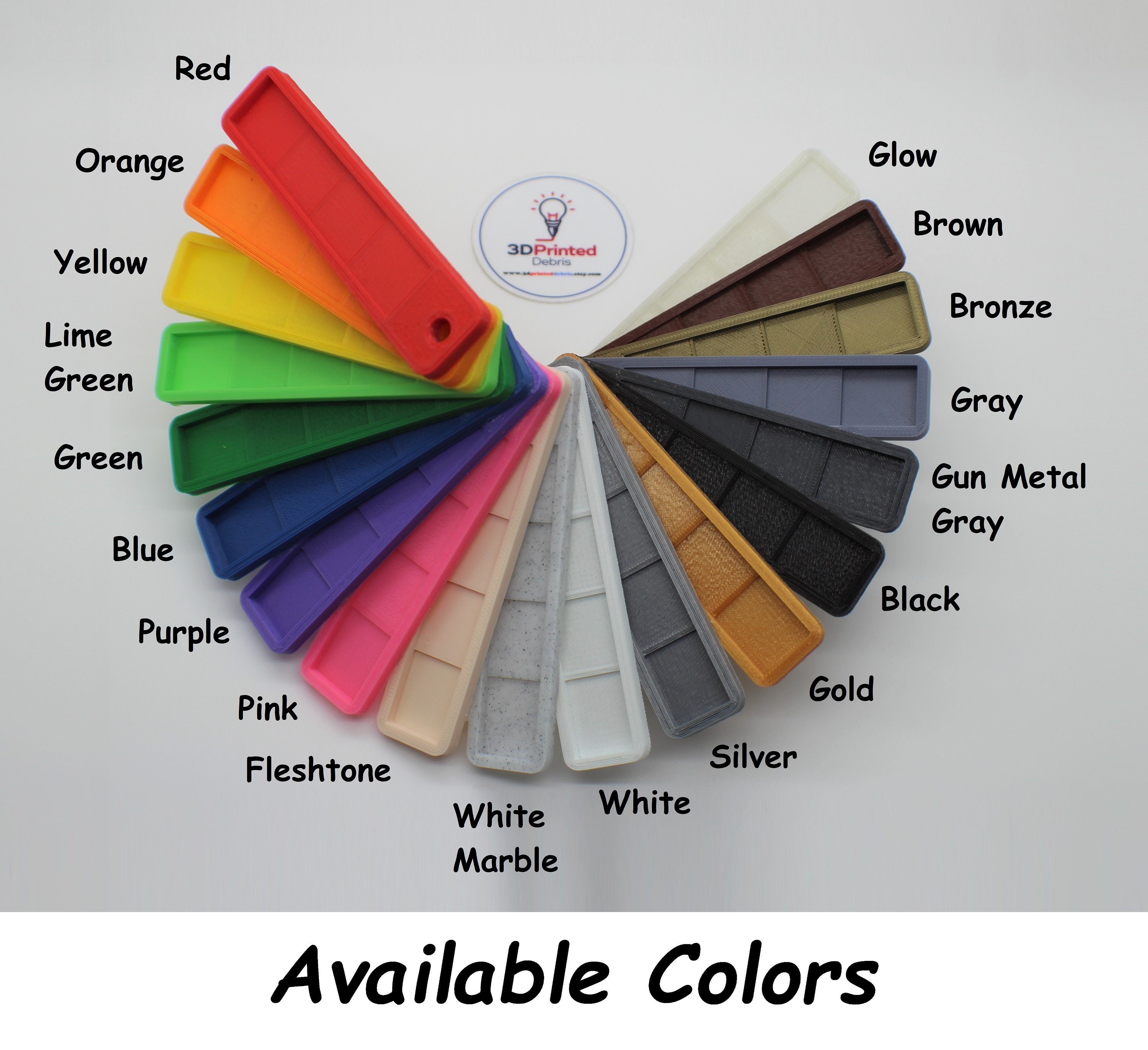 This is a 3D printed replica of the Buddha monument located in Kamakura, Japan (AKA Taiizan Kotokuin Shojosenji, or Kōtoku-in) . It is printed in high resolution, capturing his expression, hair, and the creases in his clothing. It's amazing how the model does such an effective job of recreating the stone texture, and this is captured in the print exceptionally well.

I have 3 different sizes available, see 2nd picture for details

The Great Buddha of Kamakura is a monumental outdoor bronze statue of Amitābha Buddha at the Kōtoku-in Temple in Kamakura, Kanagawa Prefecture, Japan. The bronze statue probably dates from 1252, in the Kamakura period, according to temple records. It was preceded by a giant wooden Buddha, which was completed in 1243 after ten years of continuous labor, the funds having been raised by Lady Inada (Inada-no-Tsubone) and the Buddhist priest Jōkō of Tōtōmi. That wooden statue was damaged by a storm in 1248, and the hall containing it was destroyed, so Jōkō suggested making another statue of bronze, and the huge amount of money necessary for this and for a new hall was raised for the project. The bronze image was probably cast by Ōno Gorōemon or Tanji Hisatomo, both leading casters of the time. At one time, the statue was gilded. There are still traces of gold leaf near the statue's ears.

The hall was destroyed by a storm in 1334, was rebuilt, was damaged by yet another storm in 1369, and was rebuilt yet again. The last building housing the statue was washed away in the tsunami resulting from the 1498 Meiō Nankaidō earthquake, during the Muromachi period. Since then, the Great Buddha has stood in the open air.

The statue is approximately 13.35 metres (43.8 ft) tall including the base and weighs approximately 93 tonnes (103 tons). The statue is hollow, and visitors can view the interior. Many visitors have left graffiti on the inside of the statue. At one time, there were thirty-two bronze lotus petals at the base of the statue, but only four remain, and they are no longer in place. A notice at the entrance to the grounds reads, "Stranger, whosoever thou art and whatsoever be thy creed, when thou enterest this sanctuary remember thou treadest upon ground hallowed by the worship of ages. This is the Temple of Buddha and the gate of the eternal, and should therefore be entered with reverence."

The 1923 Great Kanto earthquake destroyed the base the statue sits upon, but the base was repaired in 1925. Repairs to the statue were carried out in 1960–61, when the neck was strengthened and measures were taken to protect it from earthquakes.

In early 2016, further research, restoration, and preservation work was performed on the statue.

Not your thing? Well, check out my other designs