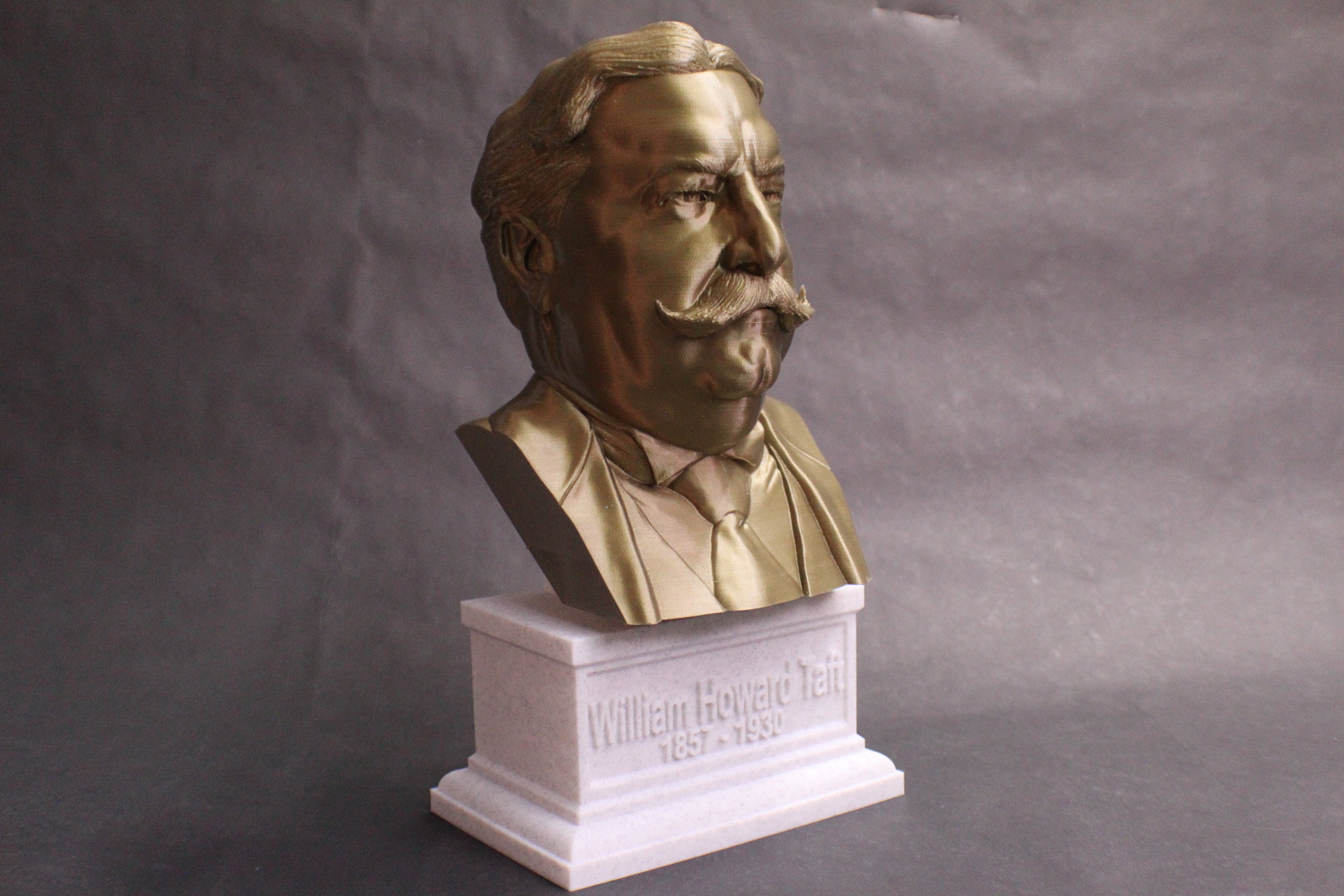 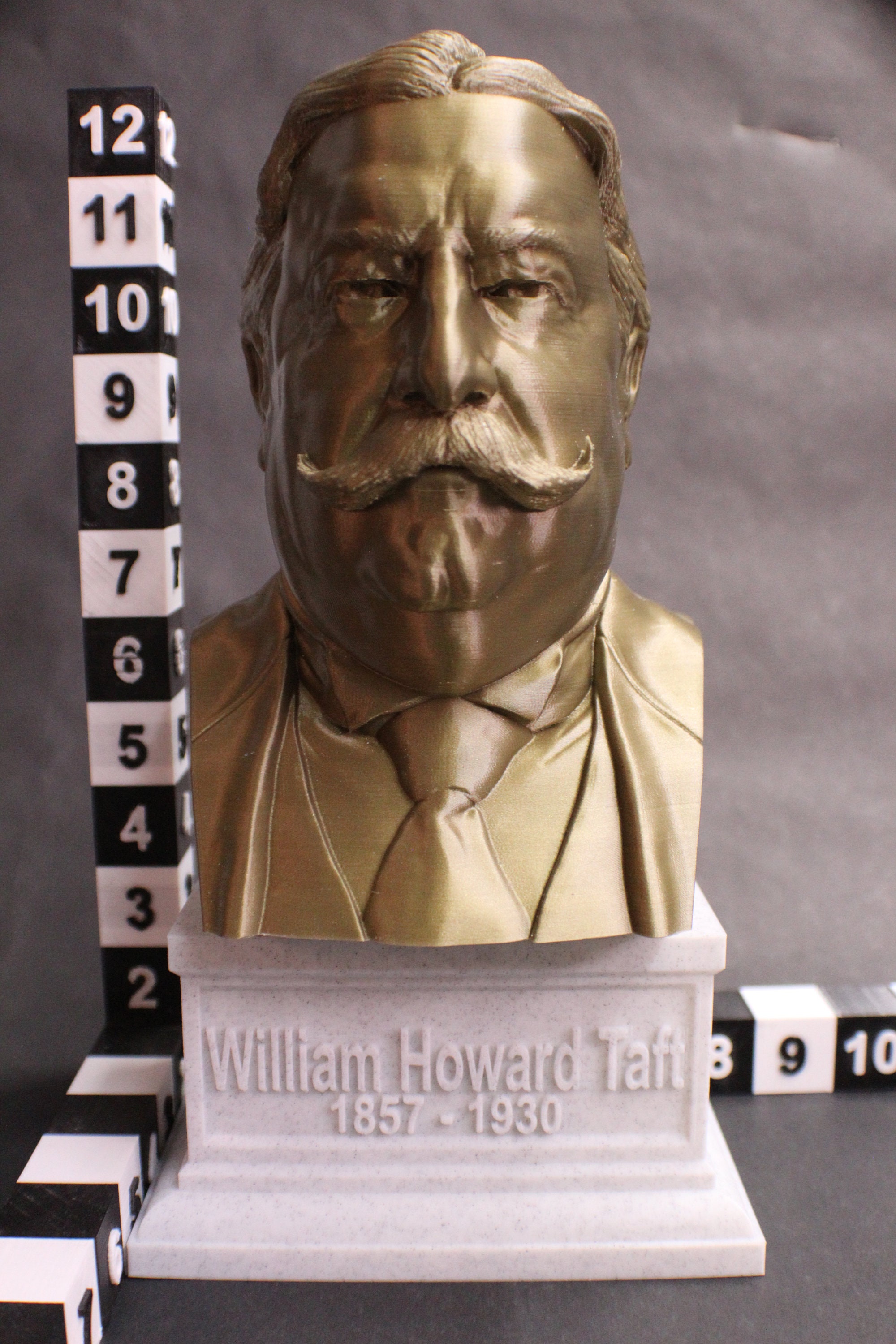 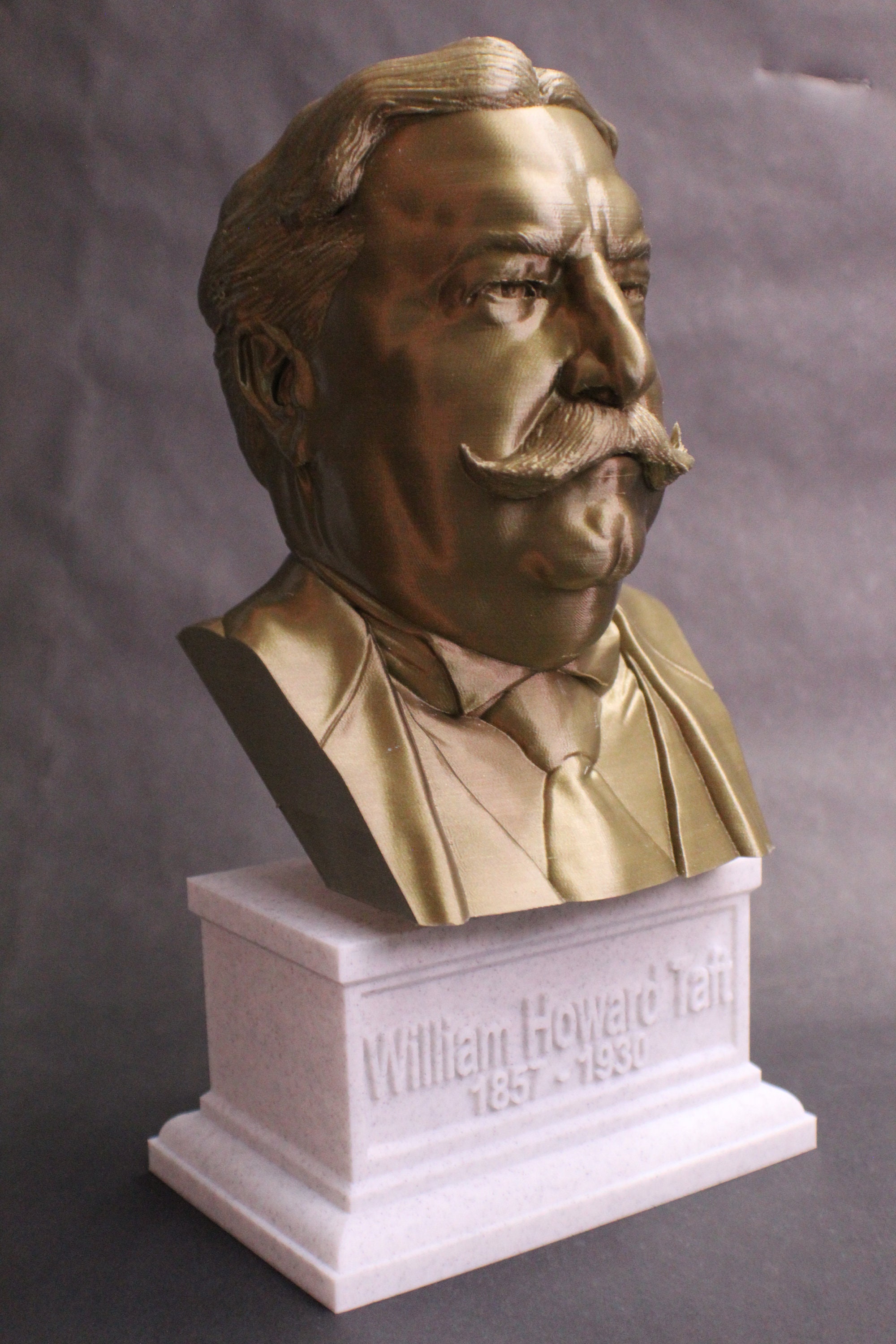 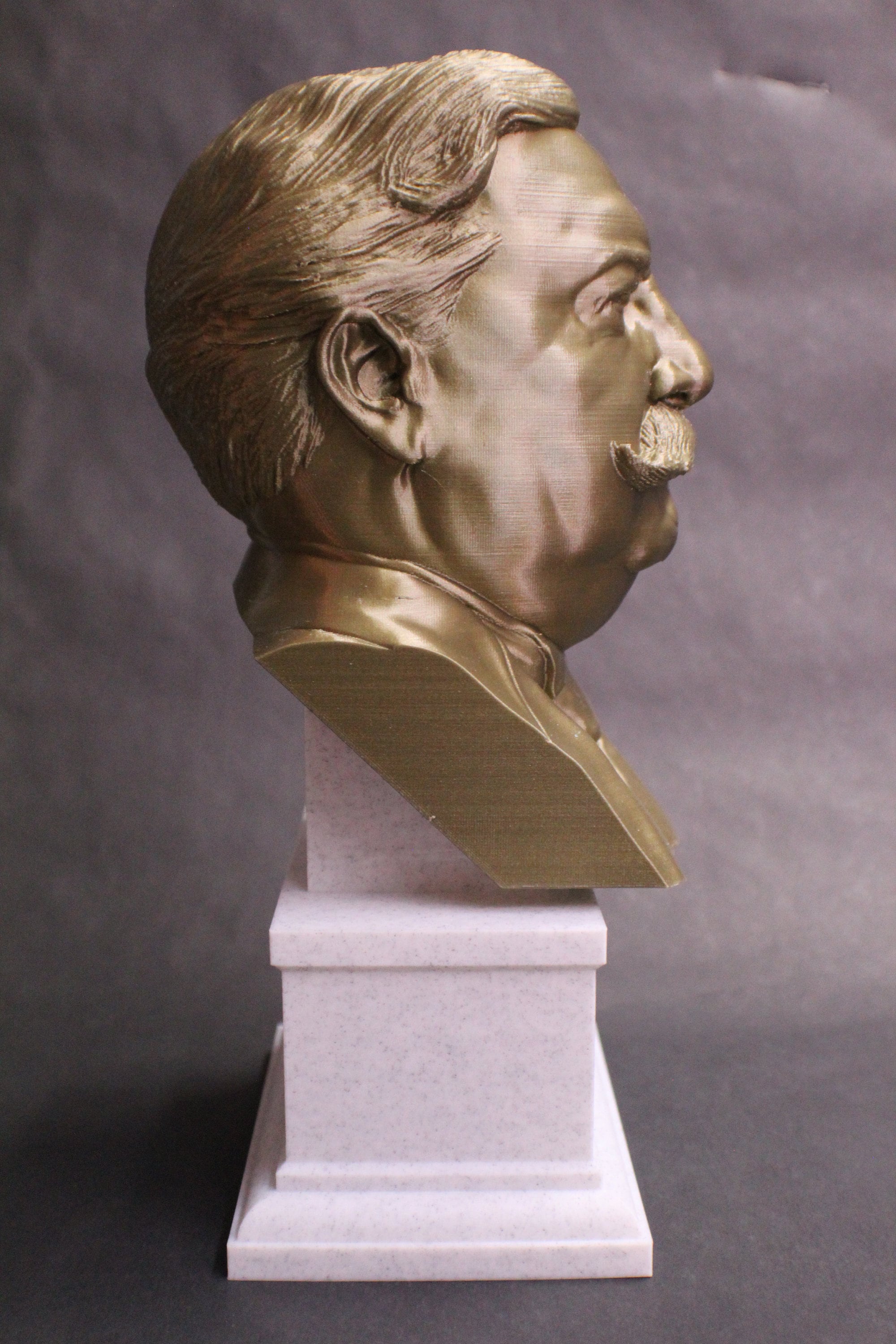 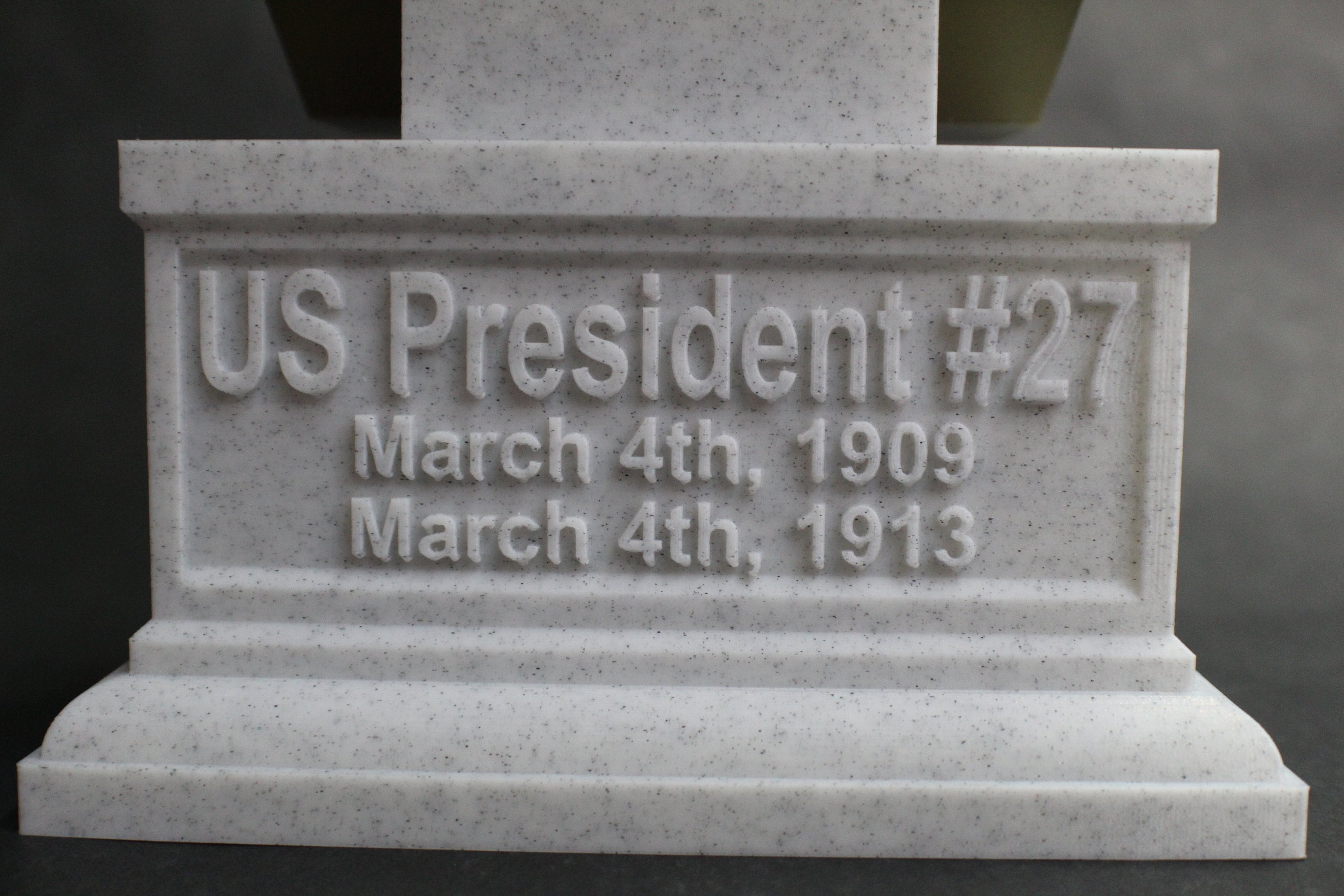 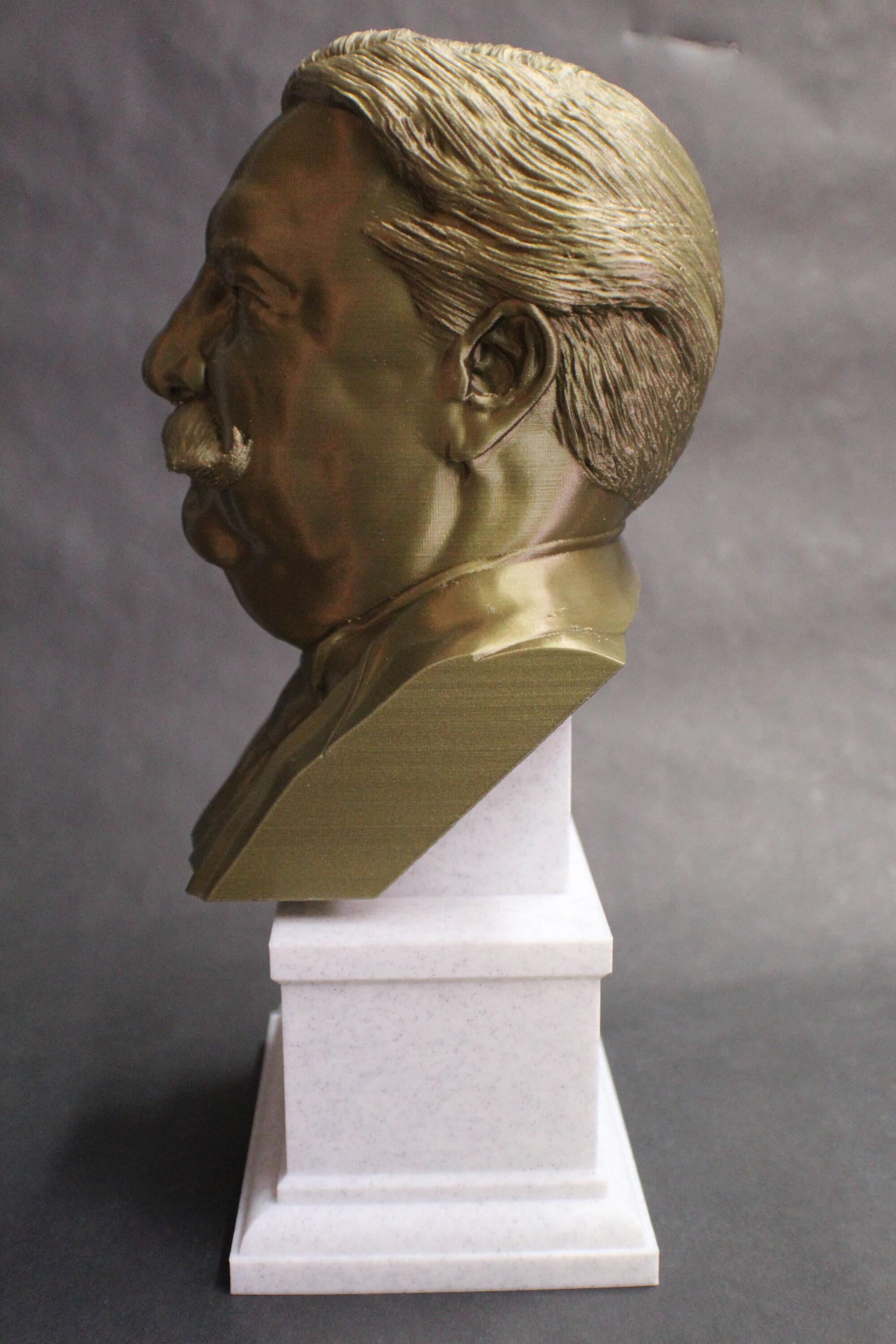 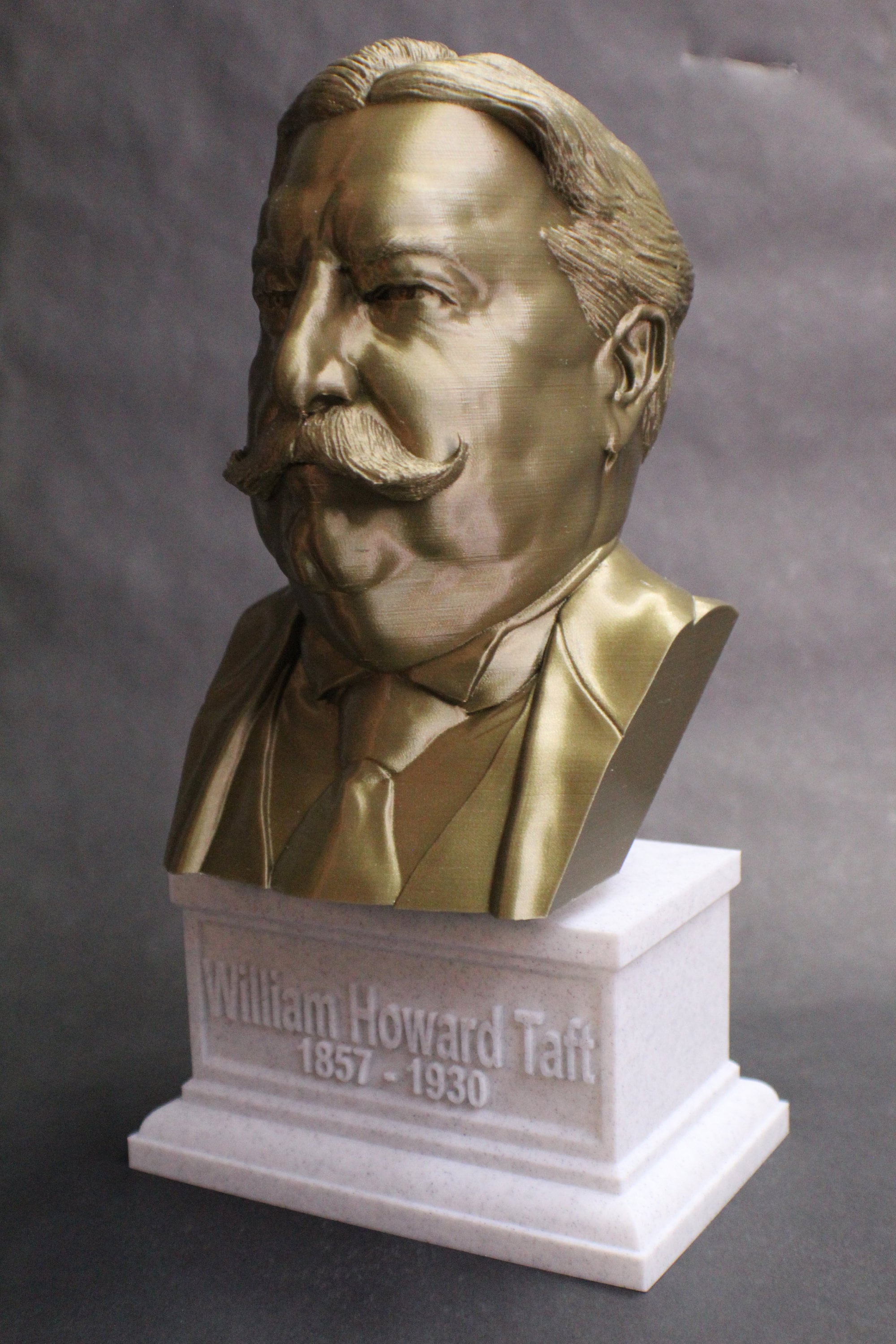 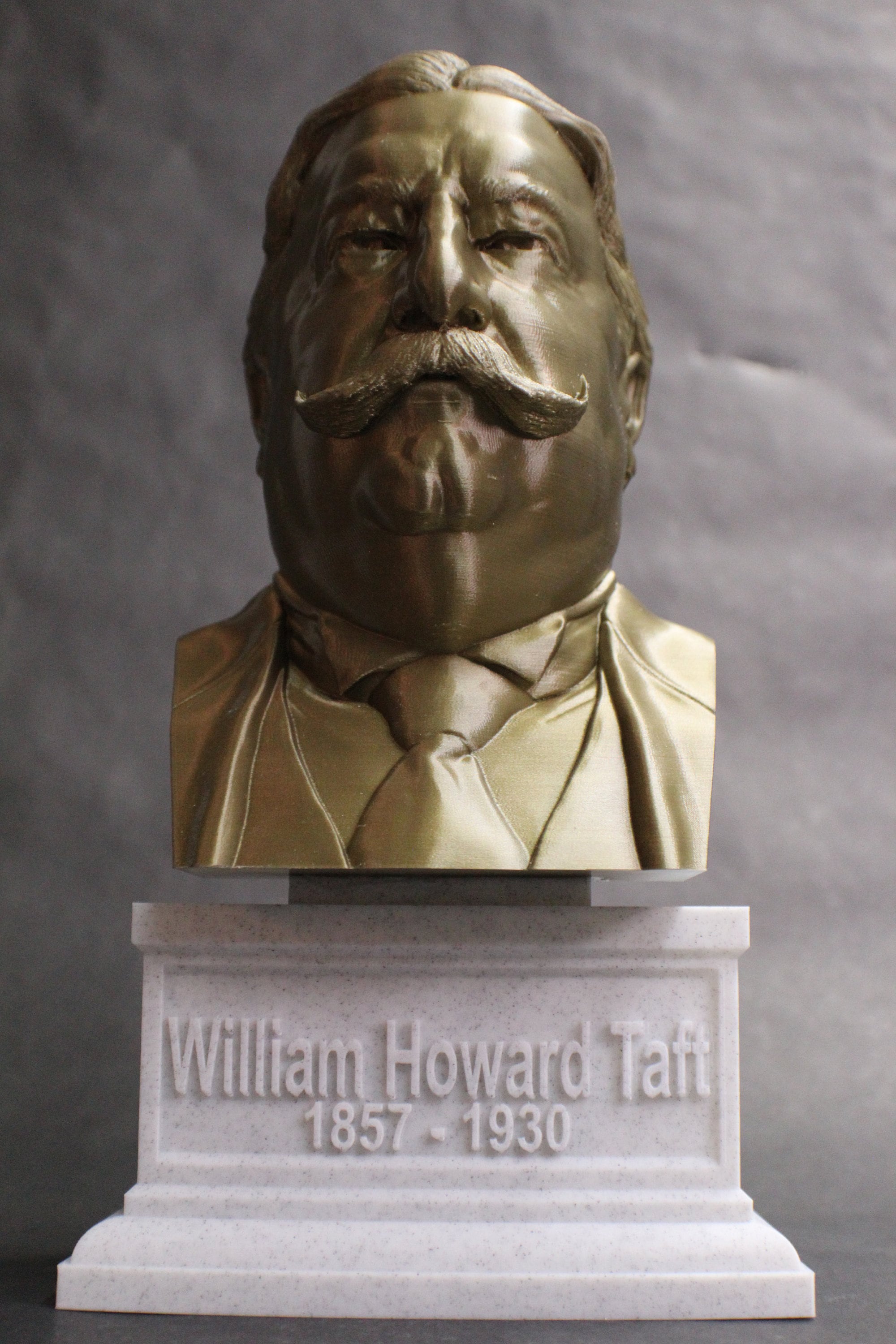 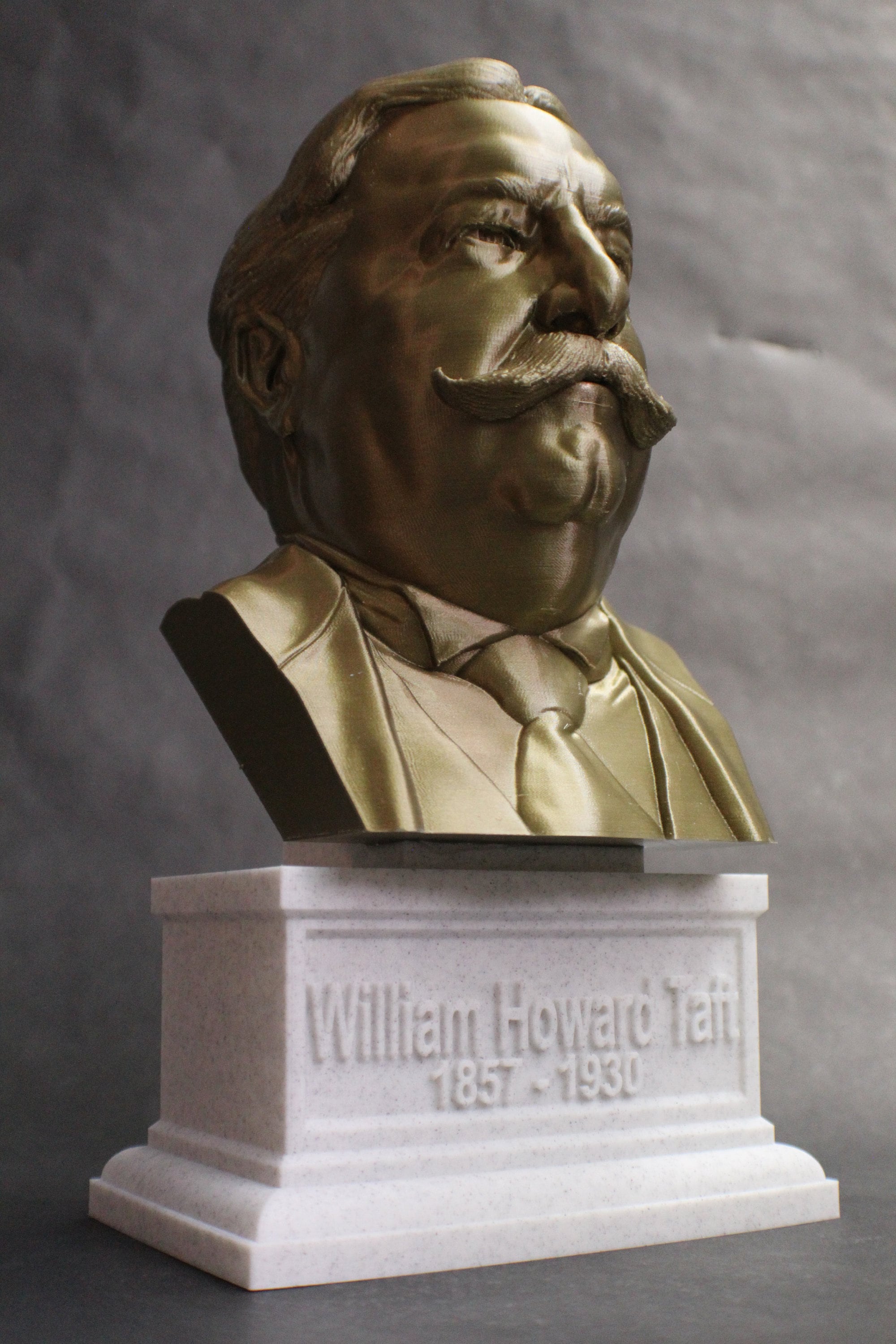 This 3D printed bust of William Howard Taft, the twenty-seventh United States President. This one is printed in a bronze and marble PLA, giving it a realistic metal/stone look and a surprise whenever someone picks it up to discover it's actual weight. It is more durable than alabaster or plaster, and is washable with lukewarm soapy water for easy spring cleaning. It comes on a custom plinth that has his lifetime on the front, and his dates in office as president on the back.

William Howard Taft was the 27th president of the United States (1909–1913) and the tenth chief justice of the United States (1921–1930), the only person to have held both offices. Taft was elected president in 1908, the chosen successor of Theodore Roosevelt, but was defeated for re-election by Woodrow Wilson in 1912 after Roosevelt split the Republican vote by running as a third-party candidate. In 1921, President Warren G. Harding appointed Taft to be chief justice, a position in which he served until a month before his death.

Taft was born in Cincinnati, Ohio in 1857. His father, Alphonso Taft, was a U.S. Attorney General and Secretary of War. Taft attended Yale and, like his father, was a member of Skull and Bones. After becoming a lawyer, Taft was appointed a judge while still in his twenties. He continued a rapid rise, being named Solicitor General and as a judge of the Sixth Circuit Court of Appeals. In 1901, President William McKinley appointed Taft civilian governor of the Philippines. In 1904, Roosevelt made him Secretary of War, and he became Roosevelt's hand-picked successor. Despite his personal ambition to become chief justice, Taft declined repeated offers of appointment to the Supreme Court of the United States, believing his political work to be more important.

With Roosevelt's help, Taft had little opposition for the Republican nomination for president in 1908 and easily defeated William Jennings Bryan for the presidency that November. In the White House, he focused on East Asia more than European affairs and repeatedly intervened to prop up or remove Latin American governments. Taft sought reductions to trade tariffs, then a major source of governmental income, but the resulting bill was heavily influenced by special interests. His administration was filled with conflict between the conservative wing of the Republican Party, with which Taft often sympathized, and the progressive wing, toward which Roosevelt moved more and more. Controversies over conservation and antitrust cases filed by the Taft administration served to further separate the two men. Roosevelt challenged Taft for renomination in 1912. Taft used his control of the party machinery to gain a bare majority of delegates and Roosevelt bolted the party. The split left Taft with little chance of re-election and he took only Utah and Vermont in Wilson's victory.

Why does this thing exist?! Who wants a bust of Taft? Me. I do. Thanks for having such an odd piece! The boyfriend will love this Christmas present! Higher quality than some other 3-D printed items I've seen. Love the selection of colors.