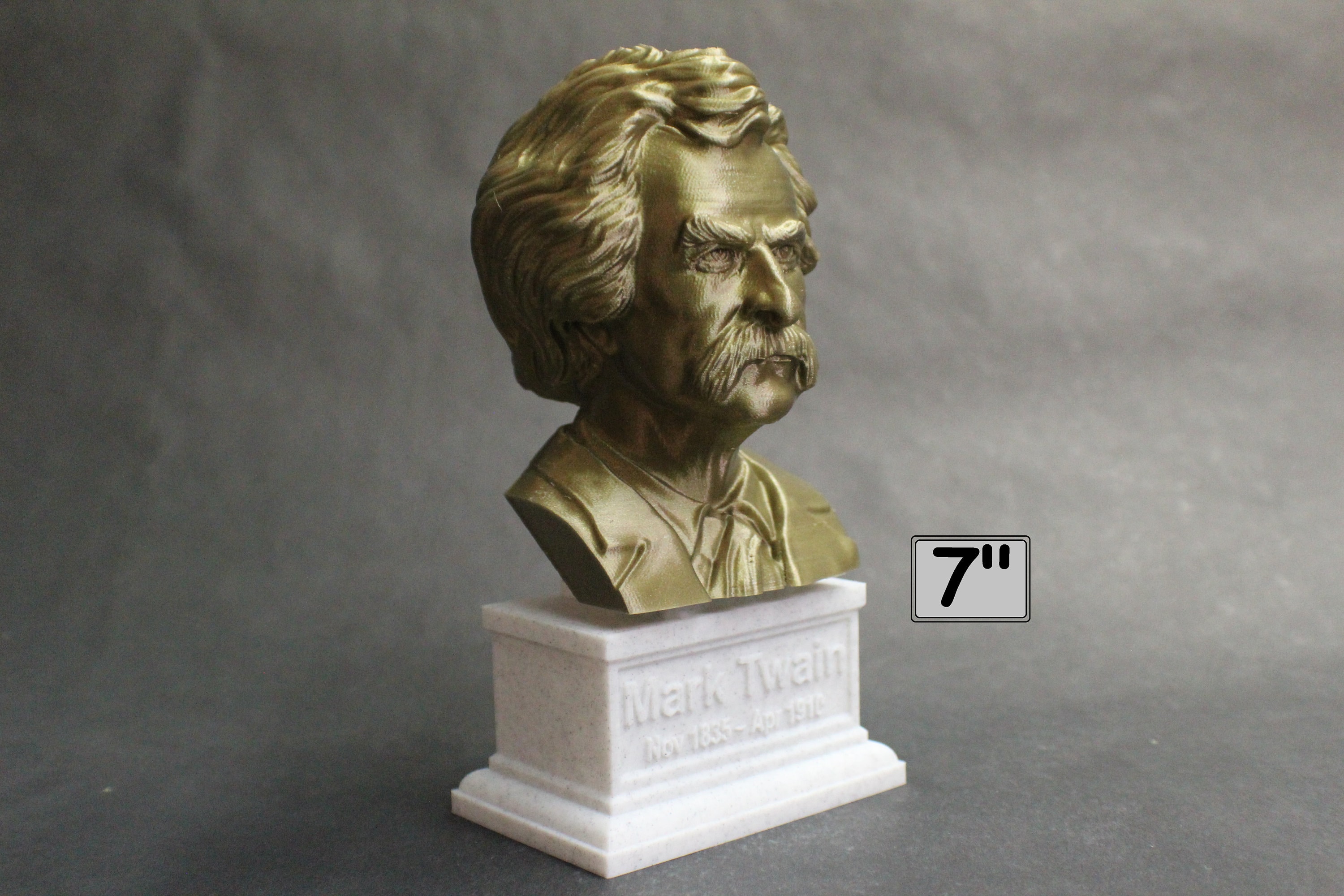 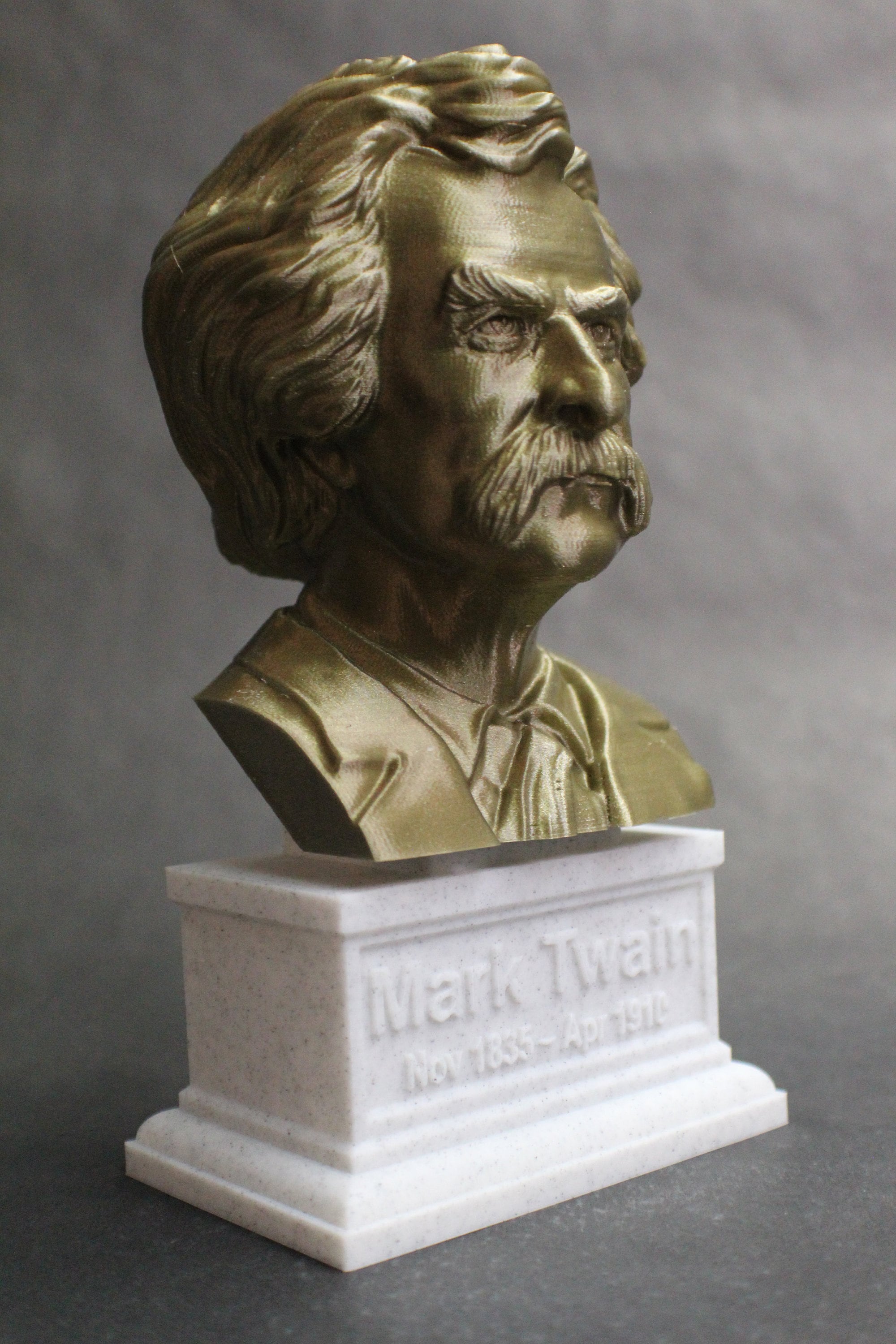 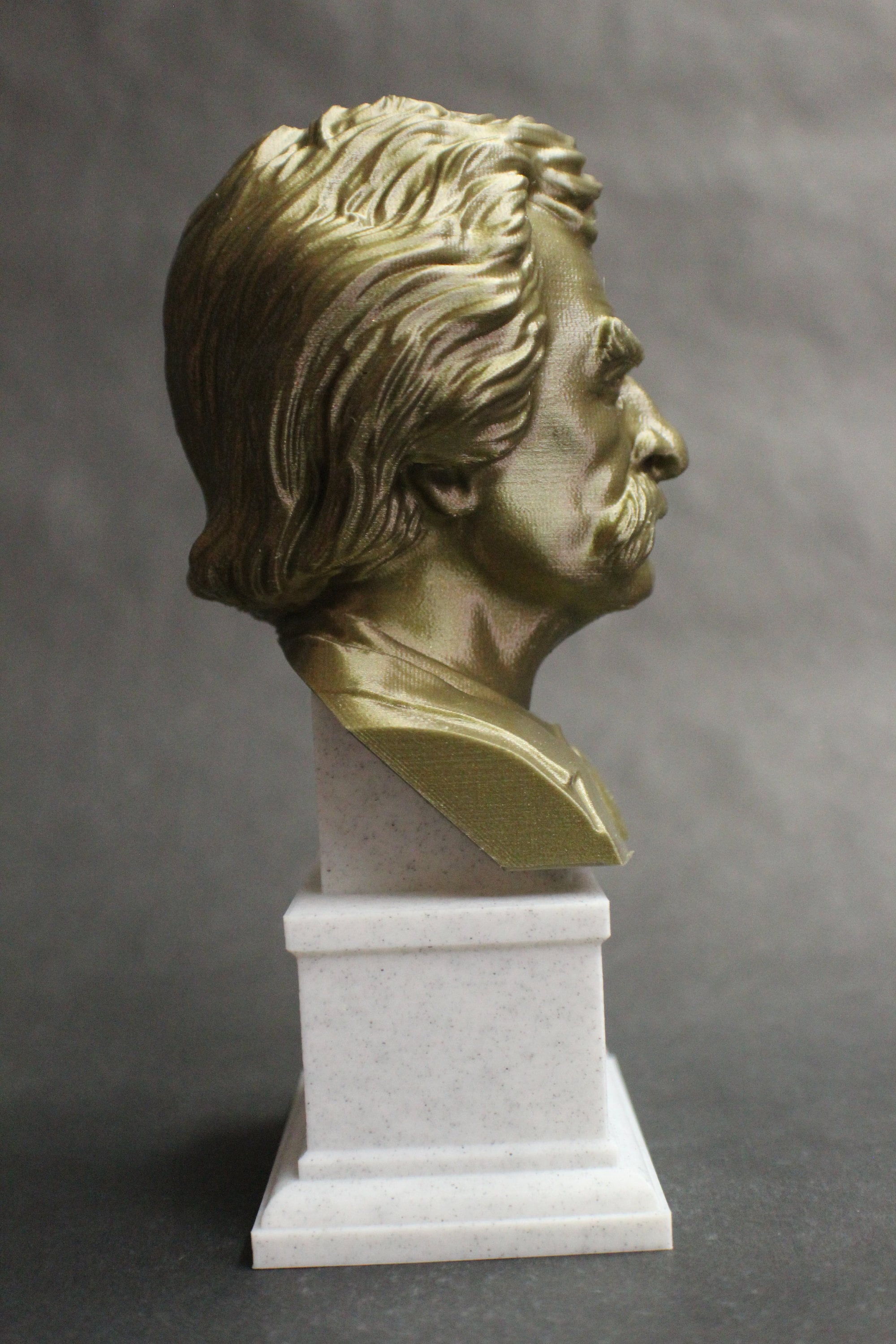 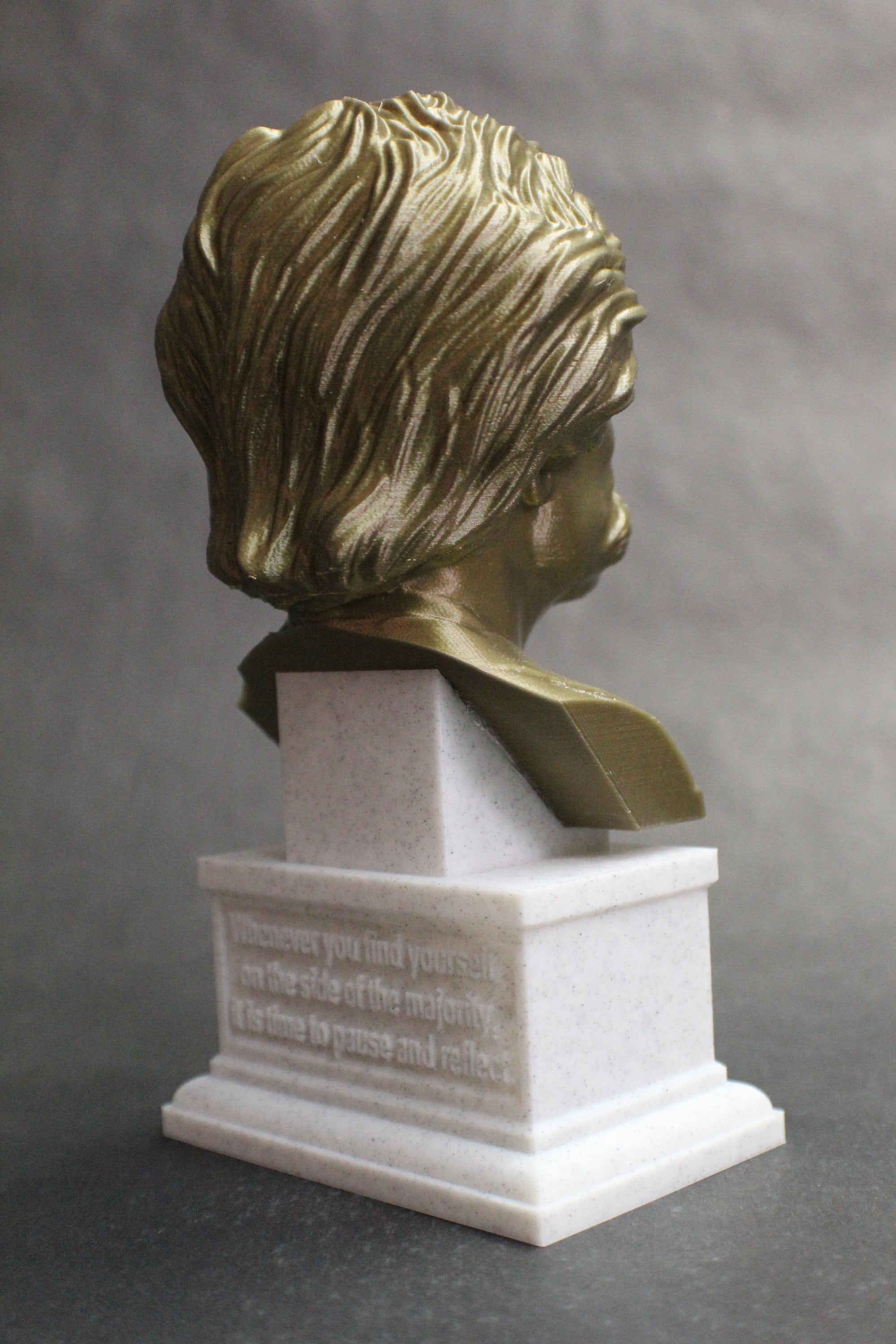 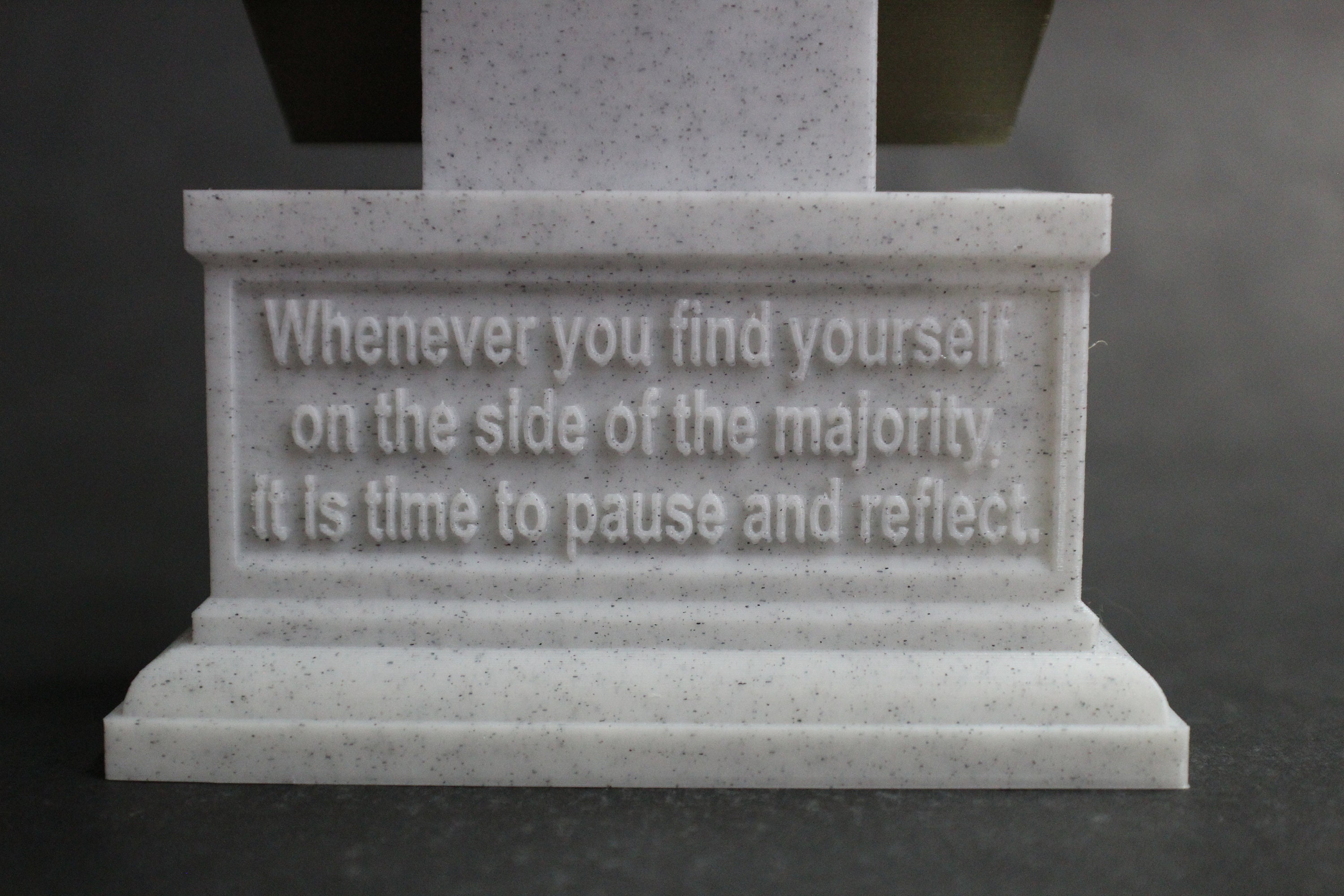 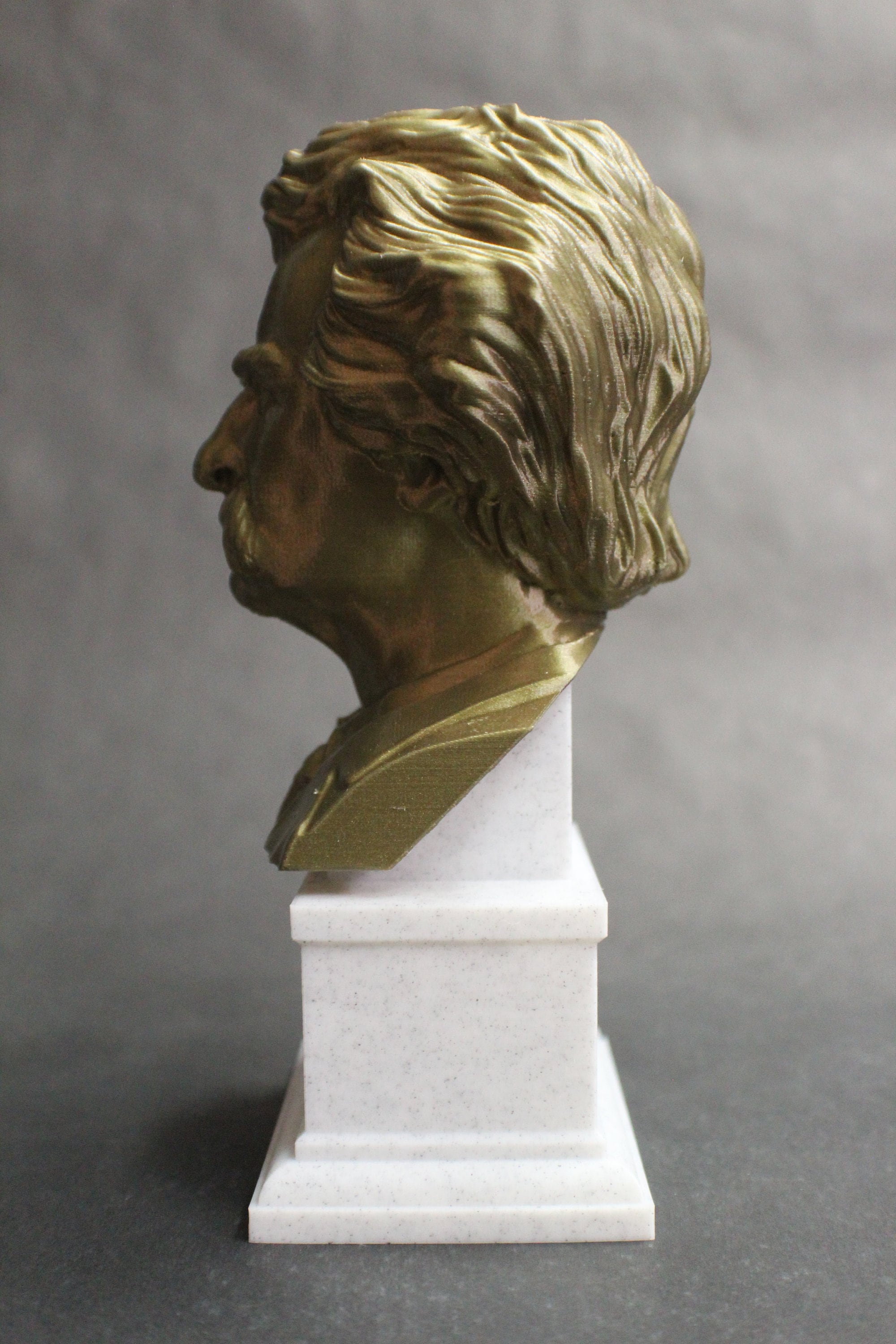 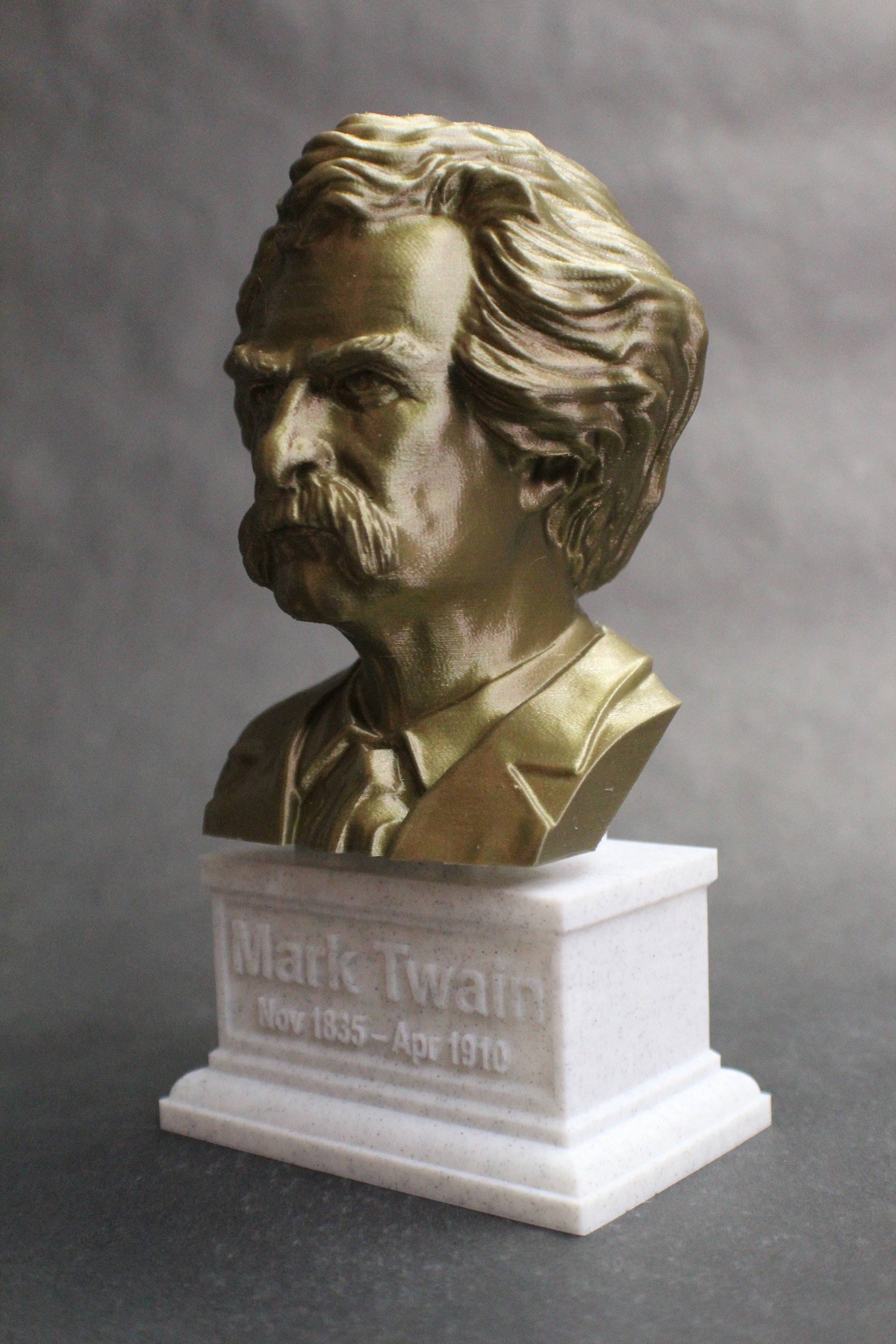 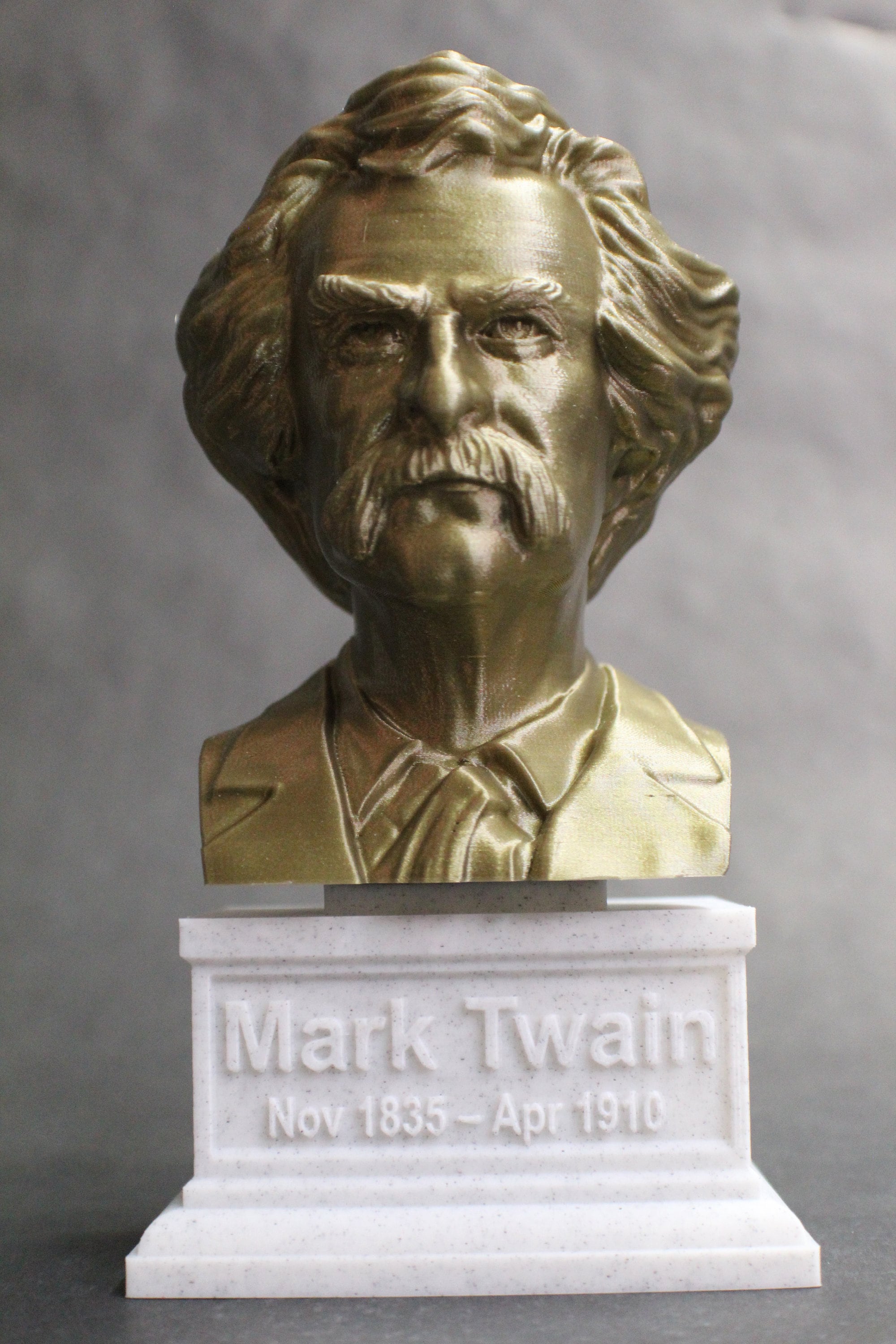 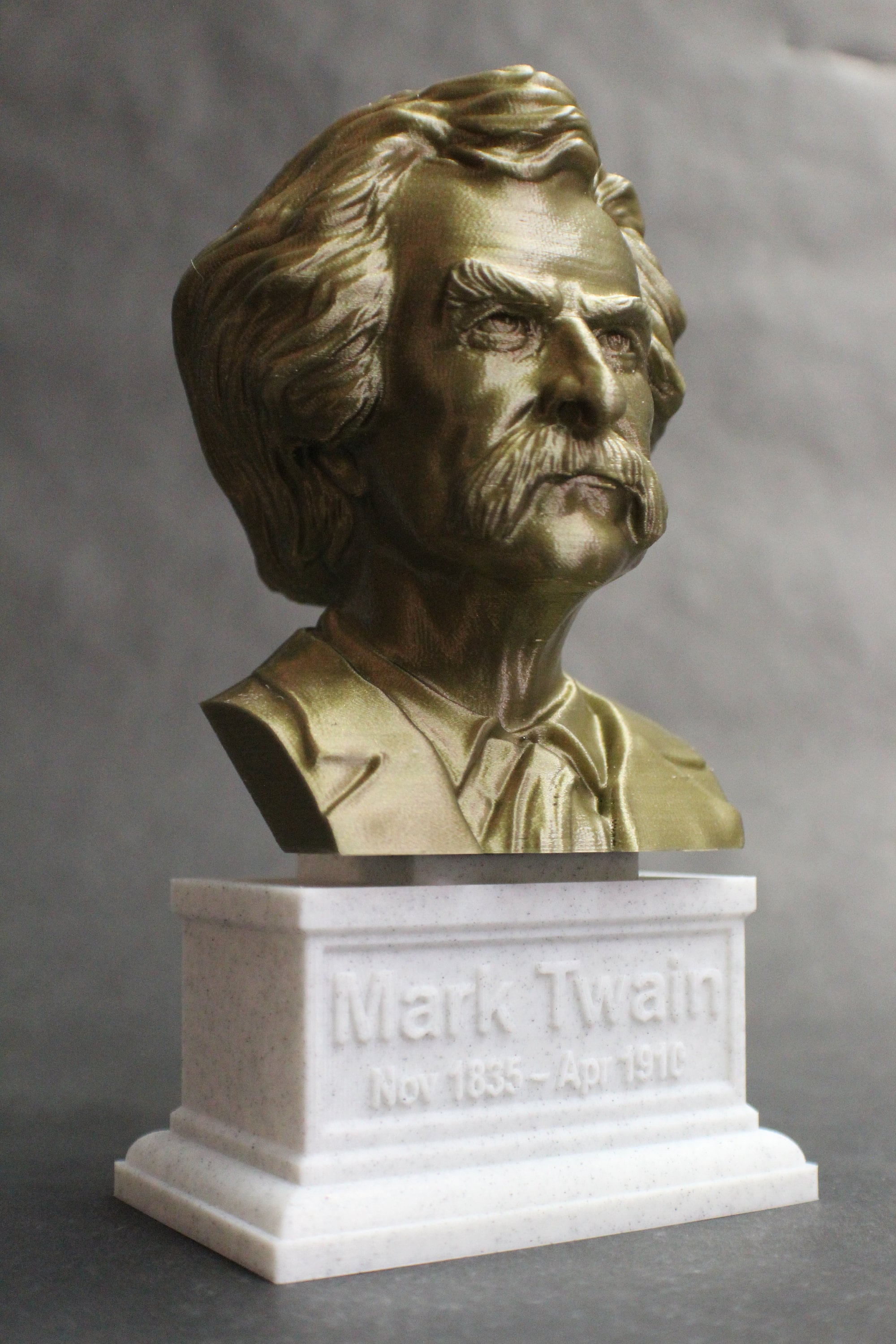 This is a 3D printed bust of Mark Twain (AKA Samuel Clemens), American Writer, Humorist, Entrepreneur, and Lecturer. This one is printed in a marble and bronze PLA, giving it a realistic stone look and a surprise whenever someone picks it up to discover it's actual weight. It is more durable than alabaster or plaster, and is washable with lukewarm soapy water for easy spring cleaning. It comes on a custom plinth that has his lifetime on the front, and the quote:

"Whenever you find yourself on the side of the majority, it is time to pause and reflect" on the back.

Mark Twain (November 30, 1835 – April 21, 1910), real name Samuel Langhorne Clemens, was an American writer, humorist, entrepreneur, publisher, and lecturer. Among his novels are The Adventures of Tom Sawyer (1876) and its sequel, the Adventures of Huckleberry Finn (1885), the latter often called "The Great American Novel".

Twain was raised in Hannibal, Missouri, which later provided the setting for Tom Sawyer and Huckleberry Finn. He served an apprenticeship with a printer and then worked as a typesetter, contributing articles to the newspaper of his older brother Orion Clemens. He later became a riverboat pilot on the Mississippi River before heading west to join Orion in Nevada. He referred humorously to his lack of success at mining, turning to journalism for the Virginia City Territorial Enterprise. His humorous story, "The Celebrated Jumping Frog of Calaveras County", was published in 1865, based on a story that he heard at Angels Hotel in Angels Camp, California, where he had spent some time as a miner. The short story brought international attention and was even translated into French. His wit and satire, in prose and in speech, earned praise from critics and peers, and he was a friend to presidents, artists, industrialists, and European royalty.

Twain earned a great deal of money from his writings and lectures, but he invested in ventures that lost most of it—notably the Paige Compositor, a mechanical typesetter that failed because of its complexity and imprecision. He filed for bankruptcy in the wake of these financial setbacks, but he eventually overcame his financial troubles with the help of Henry Huttleston Rogers. He chose to pay all his pre-bankruptcy creditors in full, even after he had no legal responsibility to do so.

Twain was born shortly after an appearance of Halley's Comet, and he predicted that he would "go out with it" as well; he died the day after the comet returned. He was lauded as the "greatest humorist this country has produced", and William Faulkner called him "the father of American literature".

Fast shipping. They look great, very detailed, great quality. I’ve never had anything 3D printed, so I wasn’t sure what to expect. These are lighter than I was hoping for, but overall I’m happy with them.