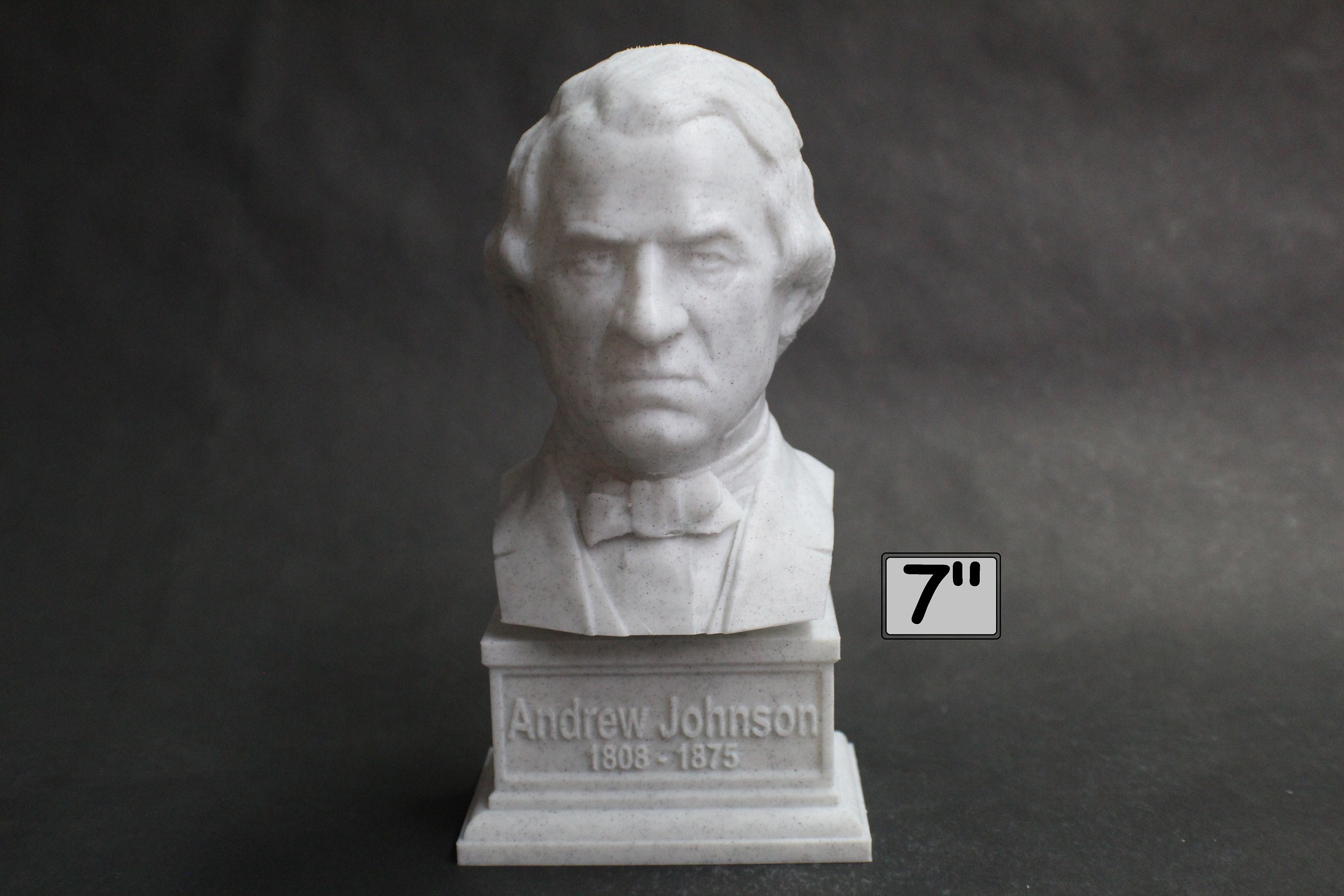 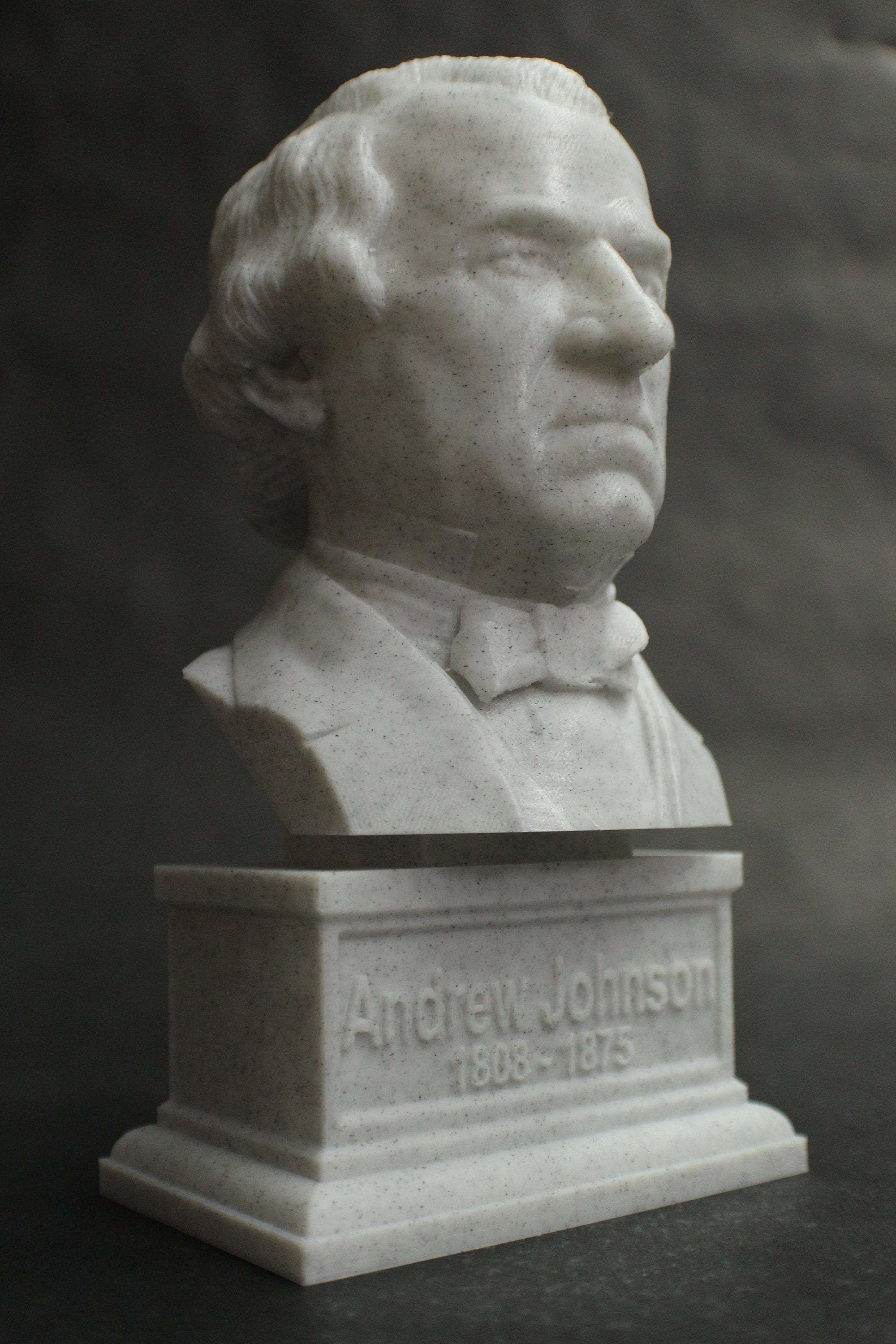 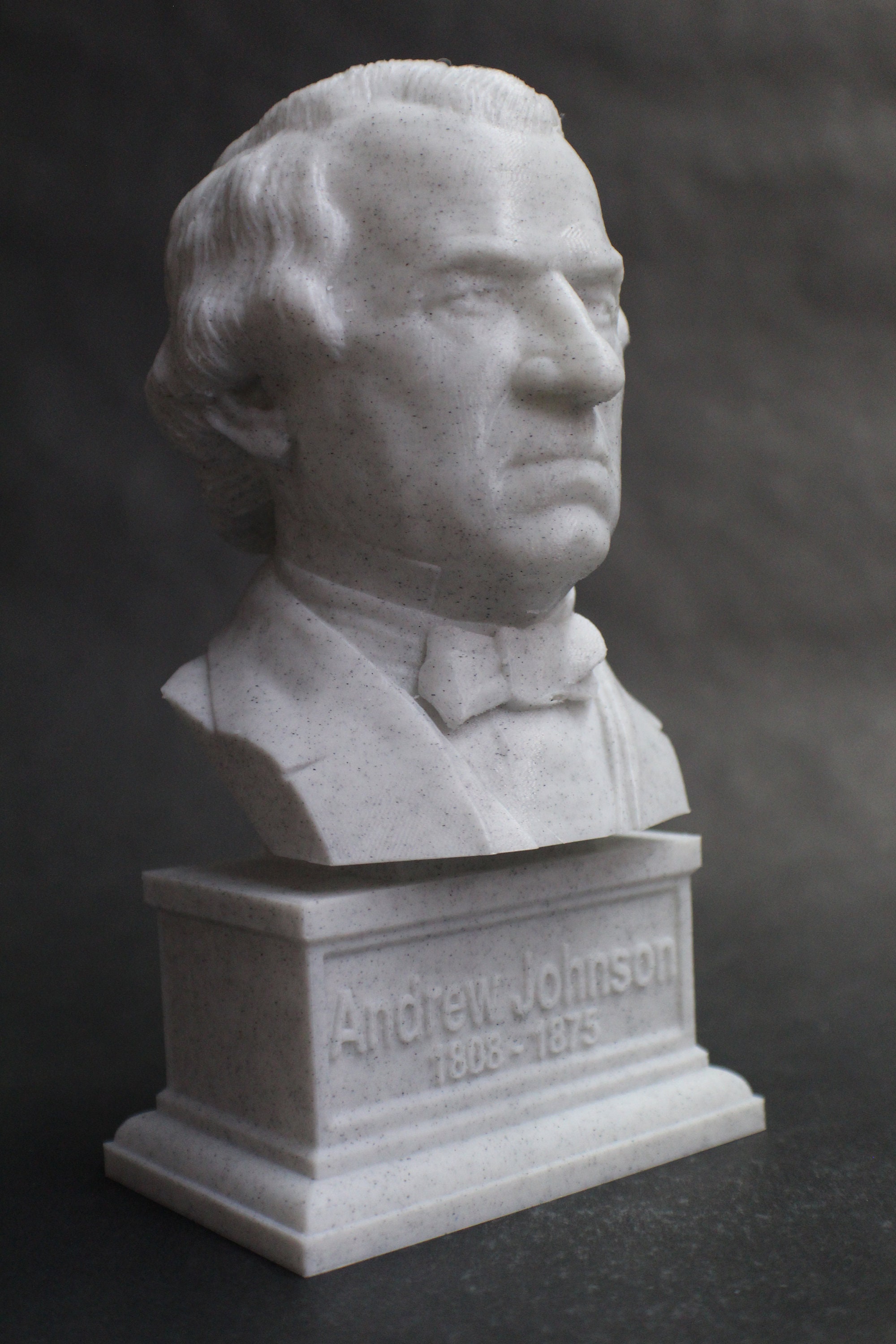 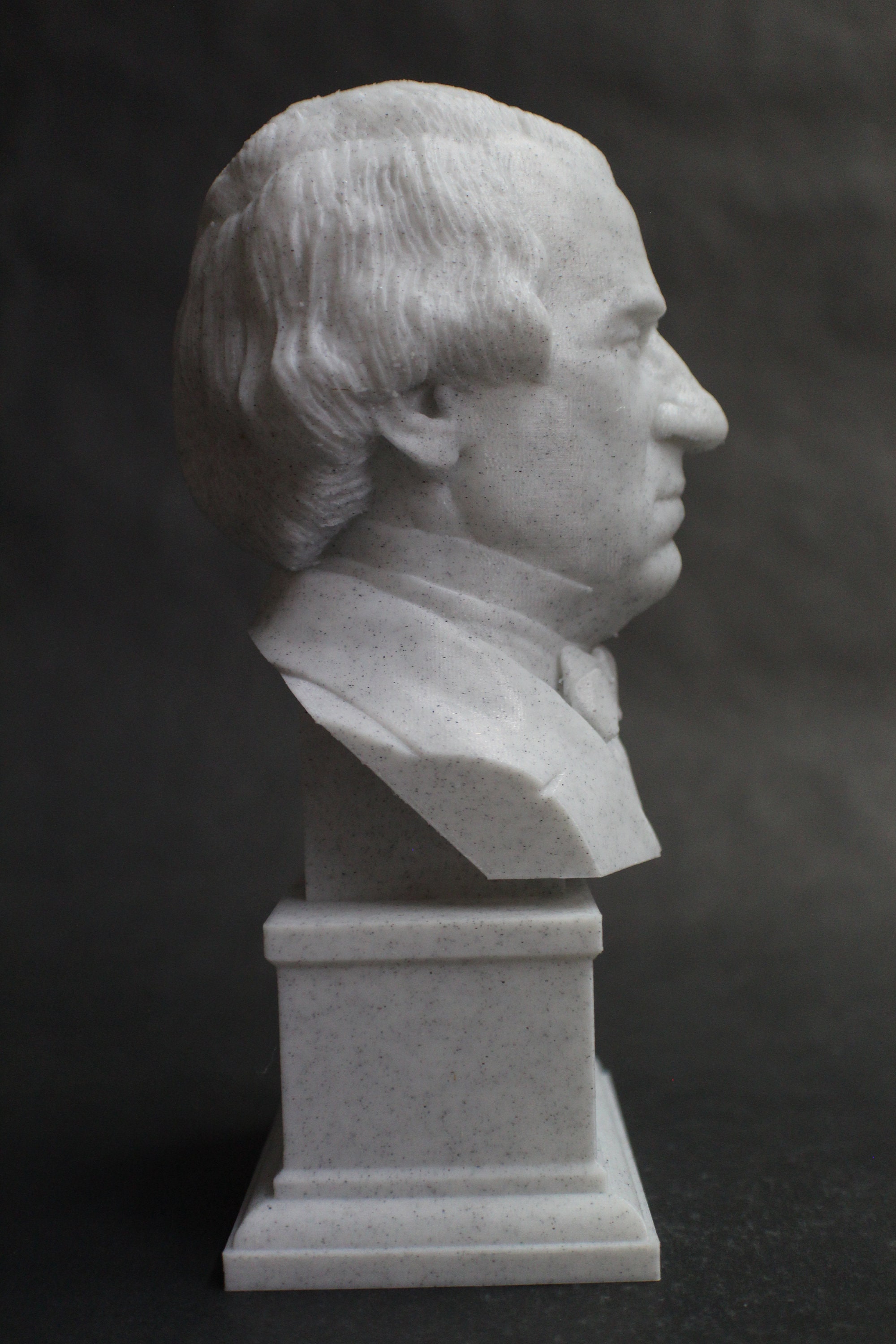 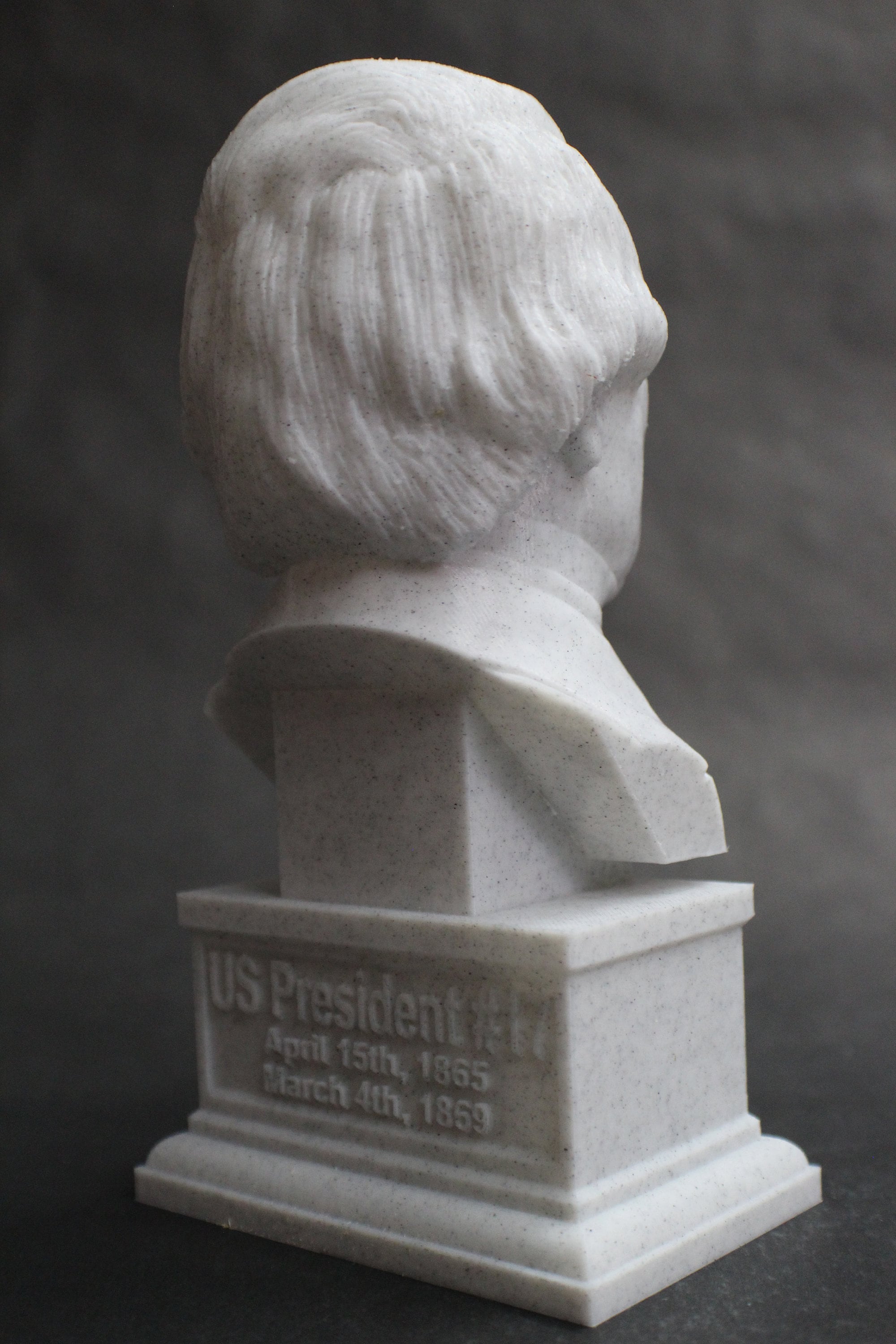 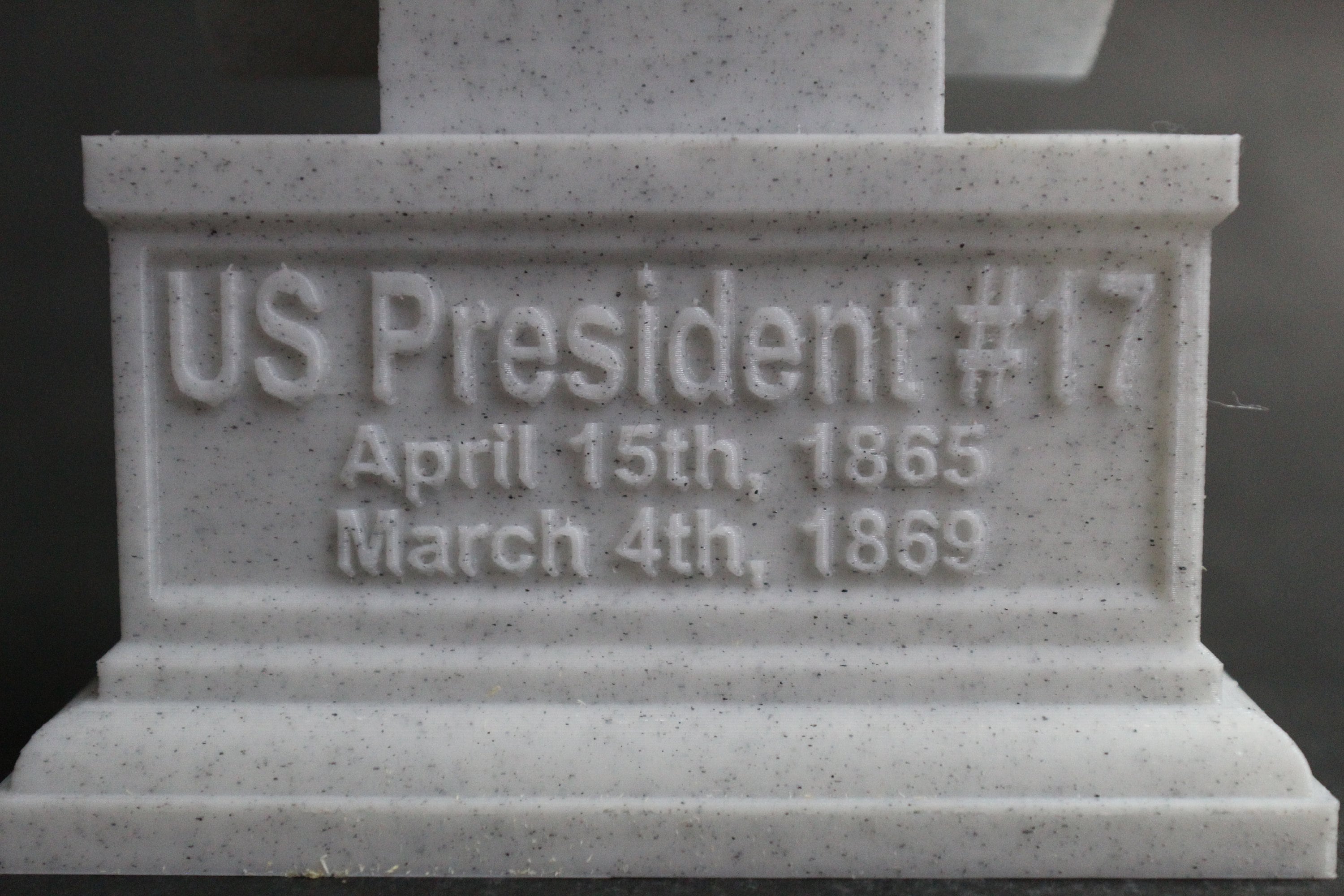 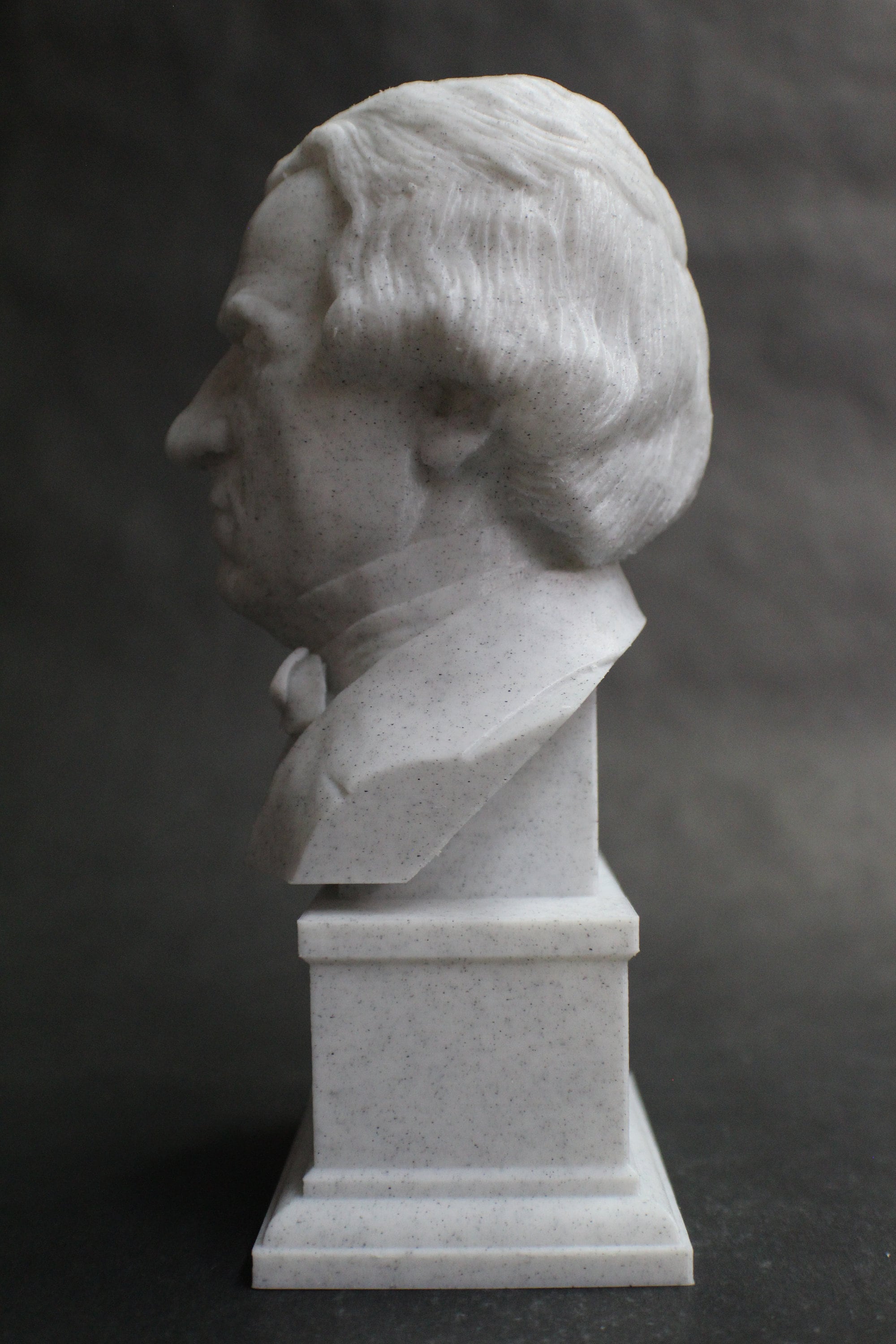 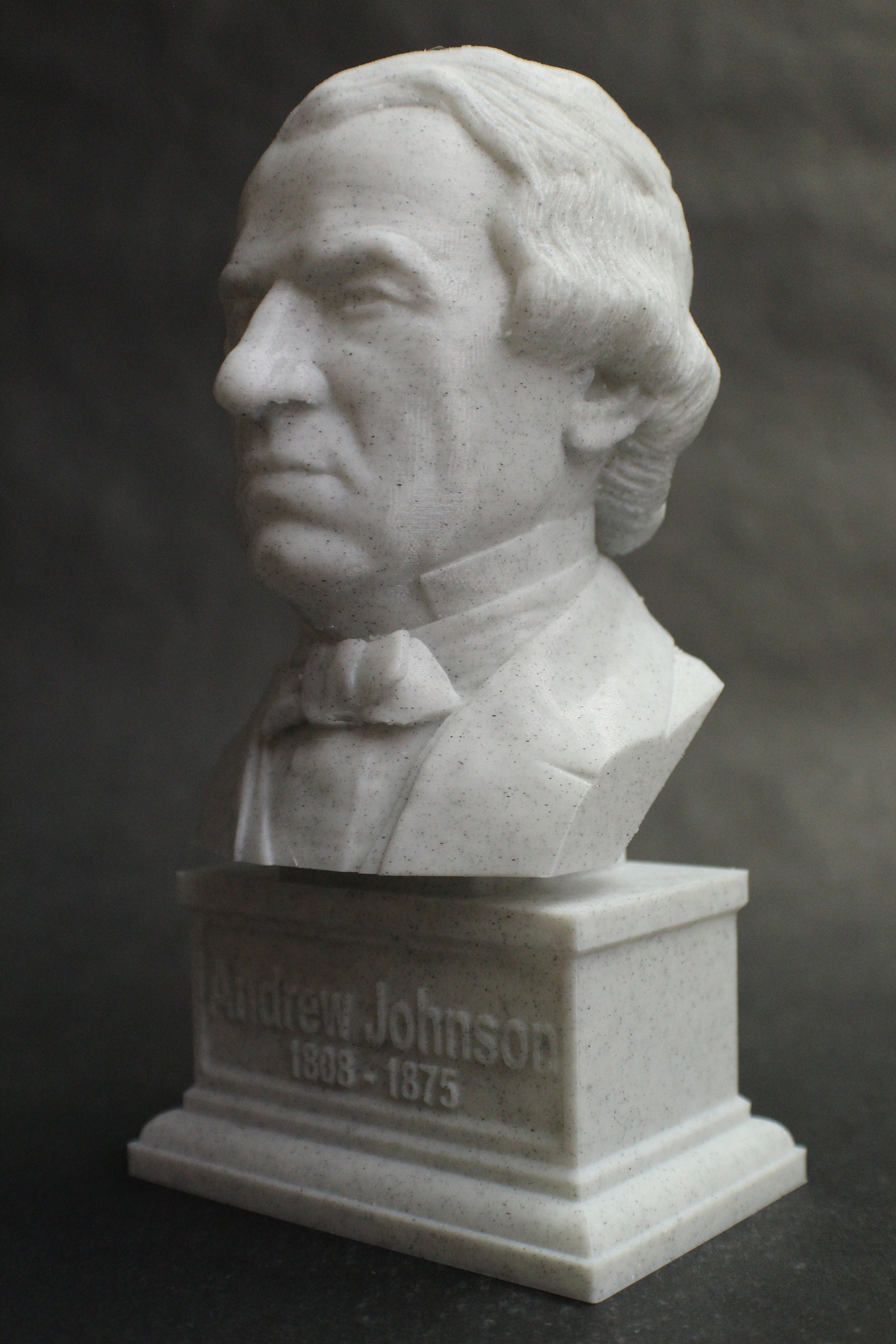 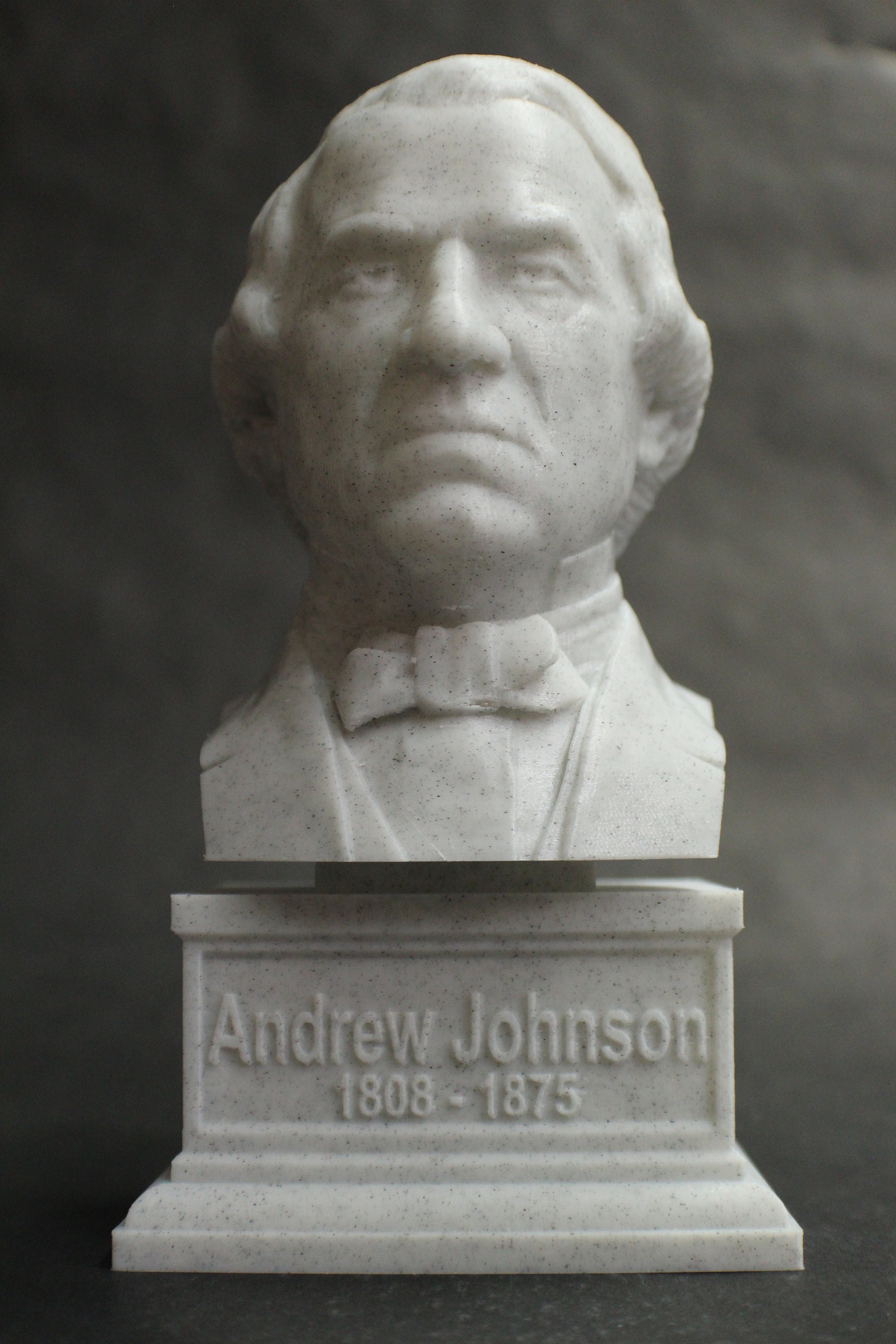 This 3D printed bust of Andrew Johnson, the seventeenth United States President. This one is printed in a marble PLA, giving it a realistic stone look and a surprise whenever someone picks it up to discover it's actual weight. It is more durable than alabaster or plaster, and is washable with lukewarm soapy water for easy spring cleaning. It comes on a custom plinth that has his lifetime on the front, and his dates in office as president on the back.

Andrew Johnson (December 29, 1808 – July 31, 1875) was the 17th president of the United States, serving from 1865 to 1869. Johnson assumed the presidency as he was vice president of the United States at the time of the assassination of Abraham Lincoln. A Democrat who ran with Lincoln on the National Union ticket, Johnson came to office as the Civil War concluded. He favored quick restoration of the seceded states to the Union. His plans did not give protection to the former slaves; he came into conflict with the Republican-dominated Congress, culminating in his impeachment by the House of Representatives. He was acquitted in the Senate by one vote. Johnson's main accomplishment as president is the Alaska purchase.

Johnson was born in poverty in Raleigh, North Carolina, and never attended school. Apprenticed as a tailor, he worked in several frontier towns before settling in Greeneville, Tennessee. He served as alderman and mayor there before being elected to the Tennessee House of Representatives in 1835. After brief service in the Tennessee Senate, Johnson was elected to the U.S. House of Representatives in 1843, where he served five two-year terms. He became Governor of Tennessee for four years, and was elected by the legislature to the U.S. Senate in 1857. In his congressional service, he sought passage of the Homestead Bill, which was enacted soon after he left his Senate seat in 1862. As Southern slave states, including Tennessee, seceded to form the Confederate States of America, Johnson remained firmly with the Union. He was the only sitting senator from a Confederate state who did not resign his seat upon learning of his state's secession. In 1862, Lincoln appointed him as military governor of Tennessee after most of it had been retaken. In 1864, Johnson, as a War Democrat and Southern Unionist, was a logical choice as running mate for Lincoln, who wished to send a message of national unity in his reelection campaign; their ticket easily won. When Johnson was sworn in as vice president in March 1865, he gave a rambling speech, after which he secluded himself to avoid public ridicule. Six weeks later, the assassination of Lincoln made him president.

Johnson implemented his own form of Presidential Reconstruction – a series of proclamations directing the seceded states to hold conventions and elections to reform their civil governments. When Southern states returned many of their old leaders, and passed Black Codes to deprive the freedmen of many civil liberties, Congressional Republicans refused to seat legislators from those states and advanced legislation to overrule the Southern actions. Johnson vetoed their bills, and Congressional Republicans overrode him, setting a pattern for the remainder of his presidency. Johnson opposed the Fourteenth Amendment, which gave citizenship to former slaves. In 1866, Johnson went on an unprecedented national tour promoting his executive policies, seeking to destroy his Republican opponents. As the conflict between the branches of government grew, Congress passed the Tenure of Office Act, restricting Johnson's ability to fire Cabinet officials. When he persisted in trying to dismiss Secretary of War Edwin Stanton, he was impeached by the House of Representatives, and narrowly avoided conviction in the Senate and removal from office. After failing to win the 1868 Democratic presidential nomination, Johnson left office in 1869.

Returning to Tennessee after his presidency, Johnson sought political vindication, and gained it in his eyes when he was elected to the Senate again in 1875, making Johnson the only former president to serve in the Senate. He died months into his term. Johnson's strong opposition to federally guaranteed rights for African Americans is widely criticized. He is regarded by many historians as one of the worst presidents in American history.