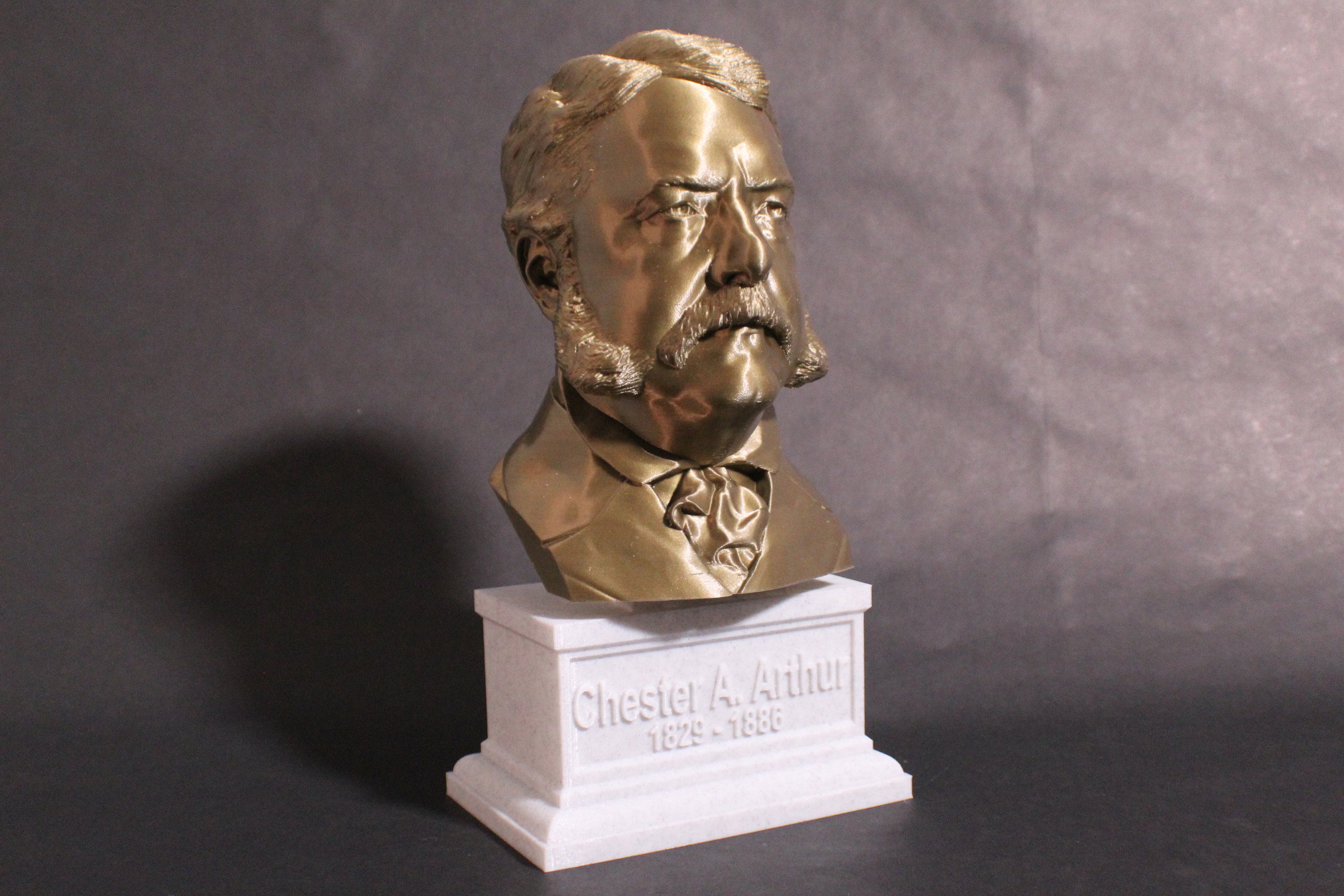 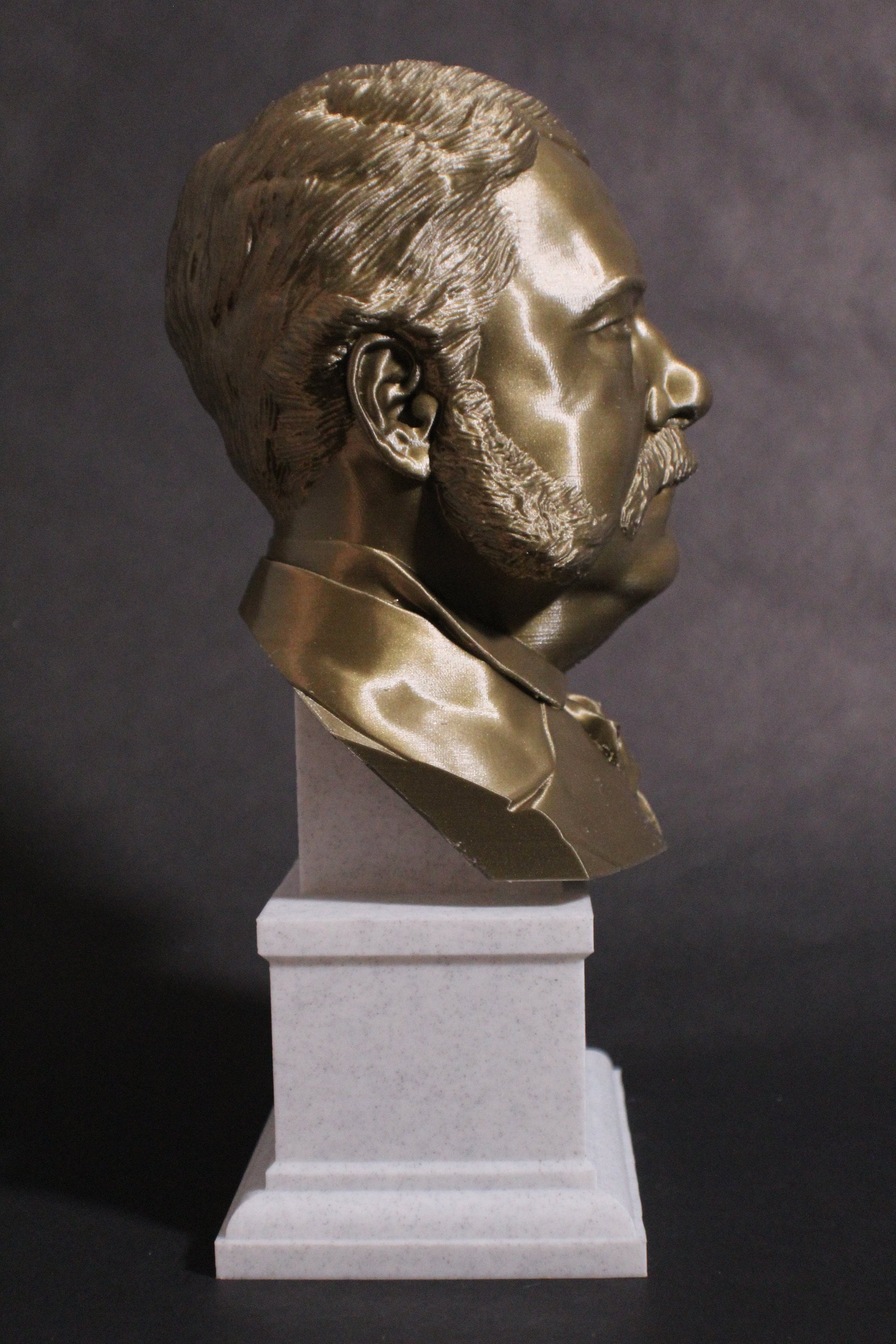 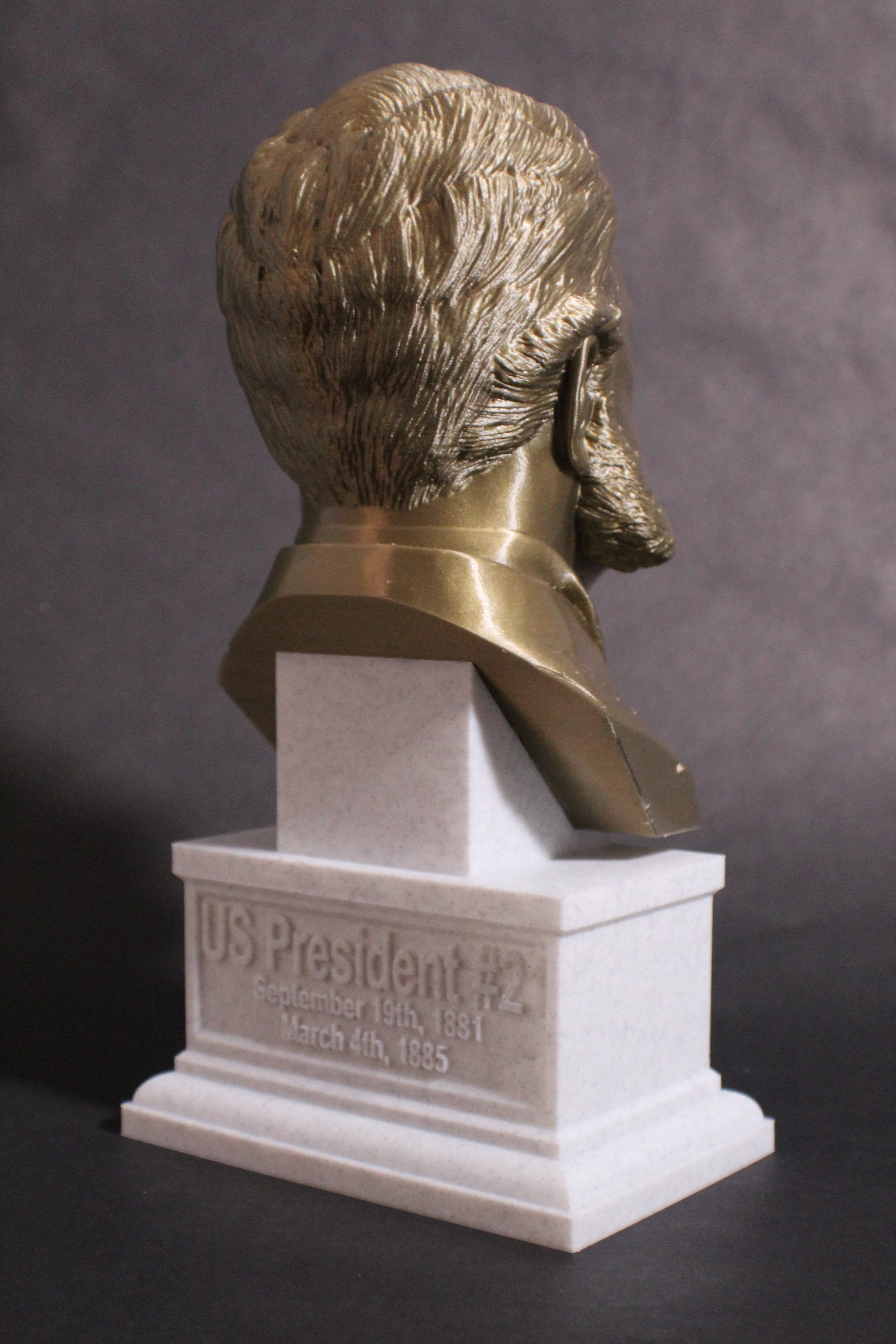 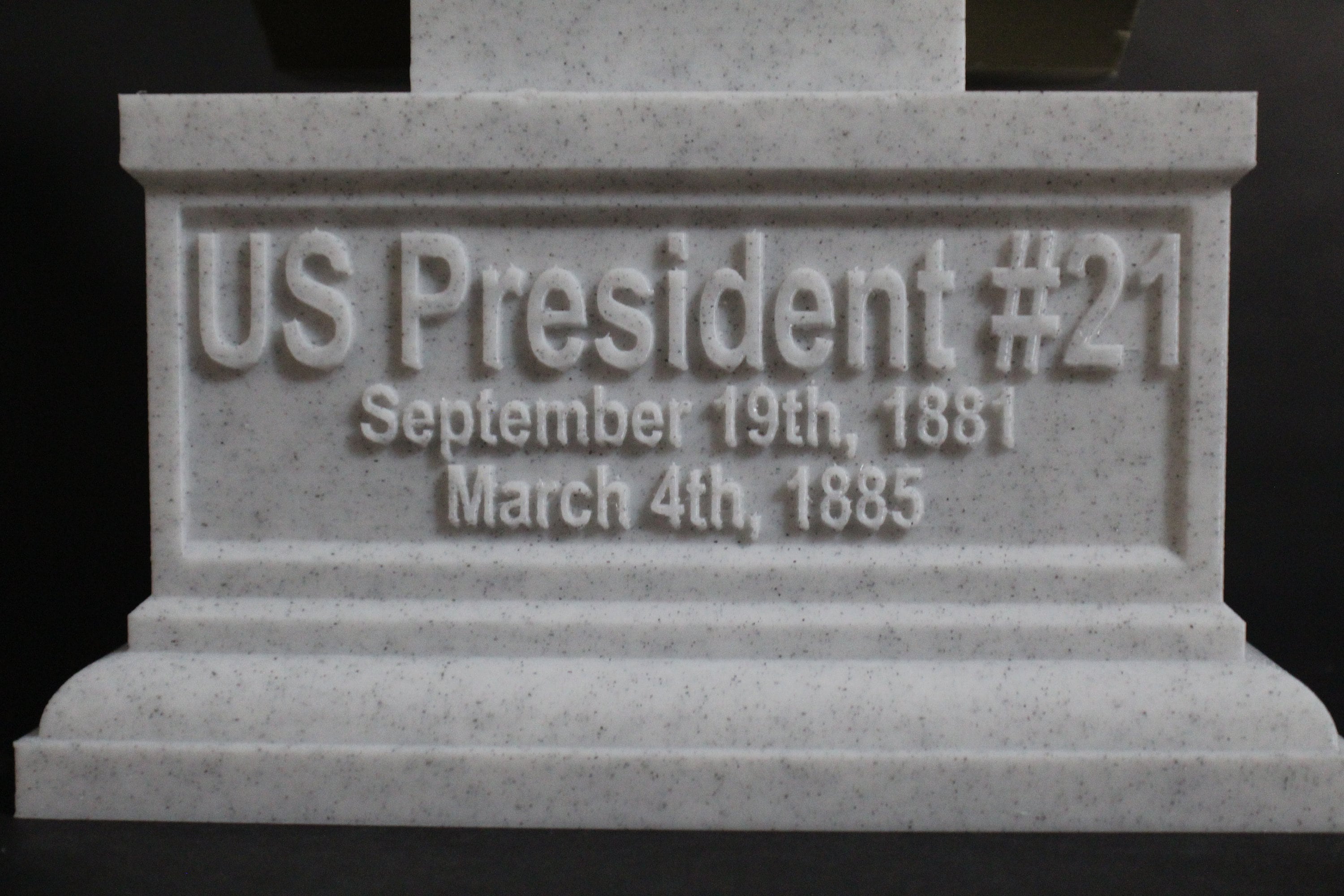 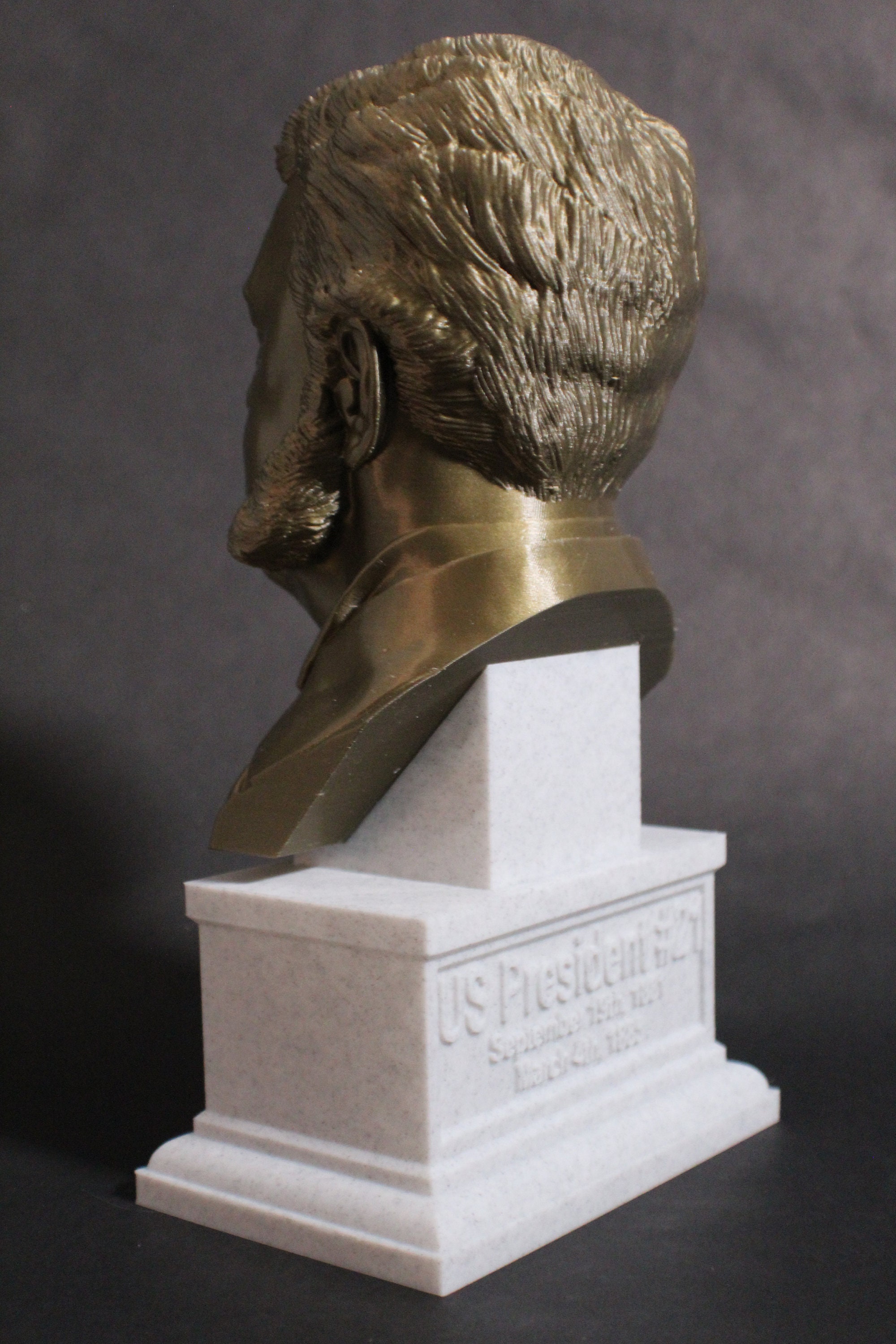 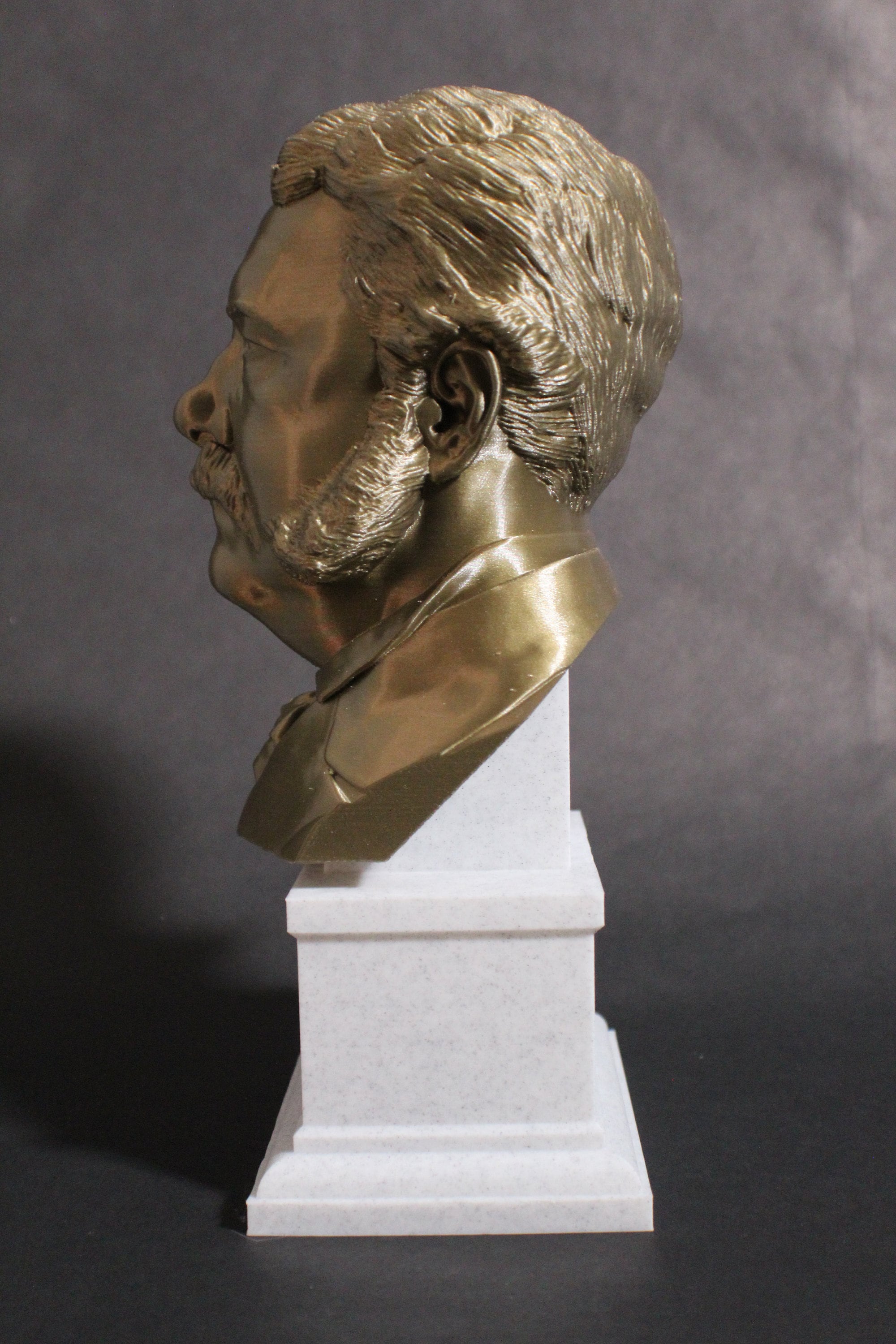 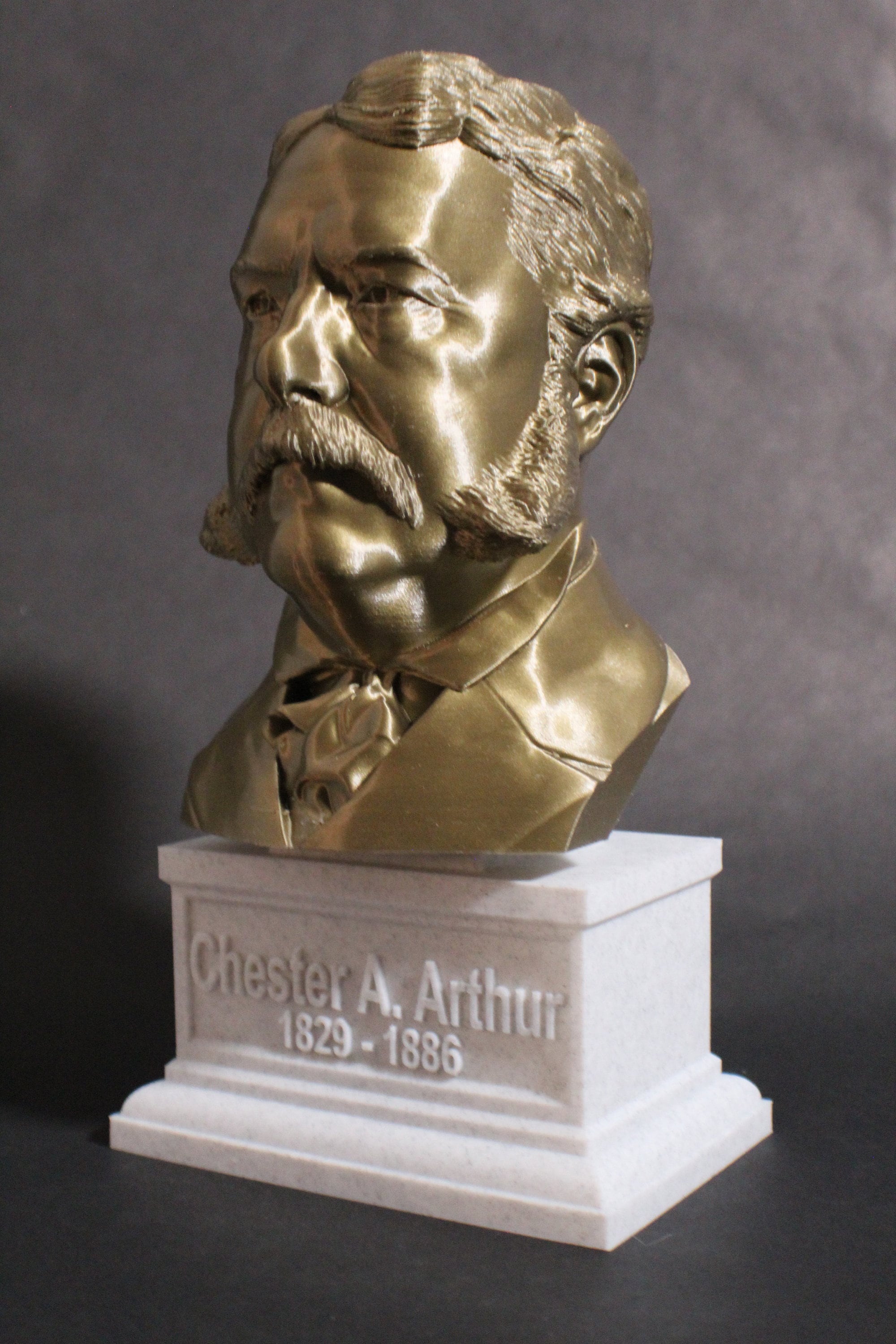 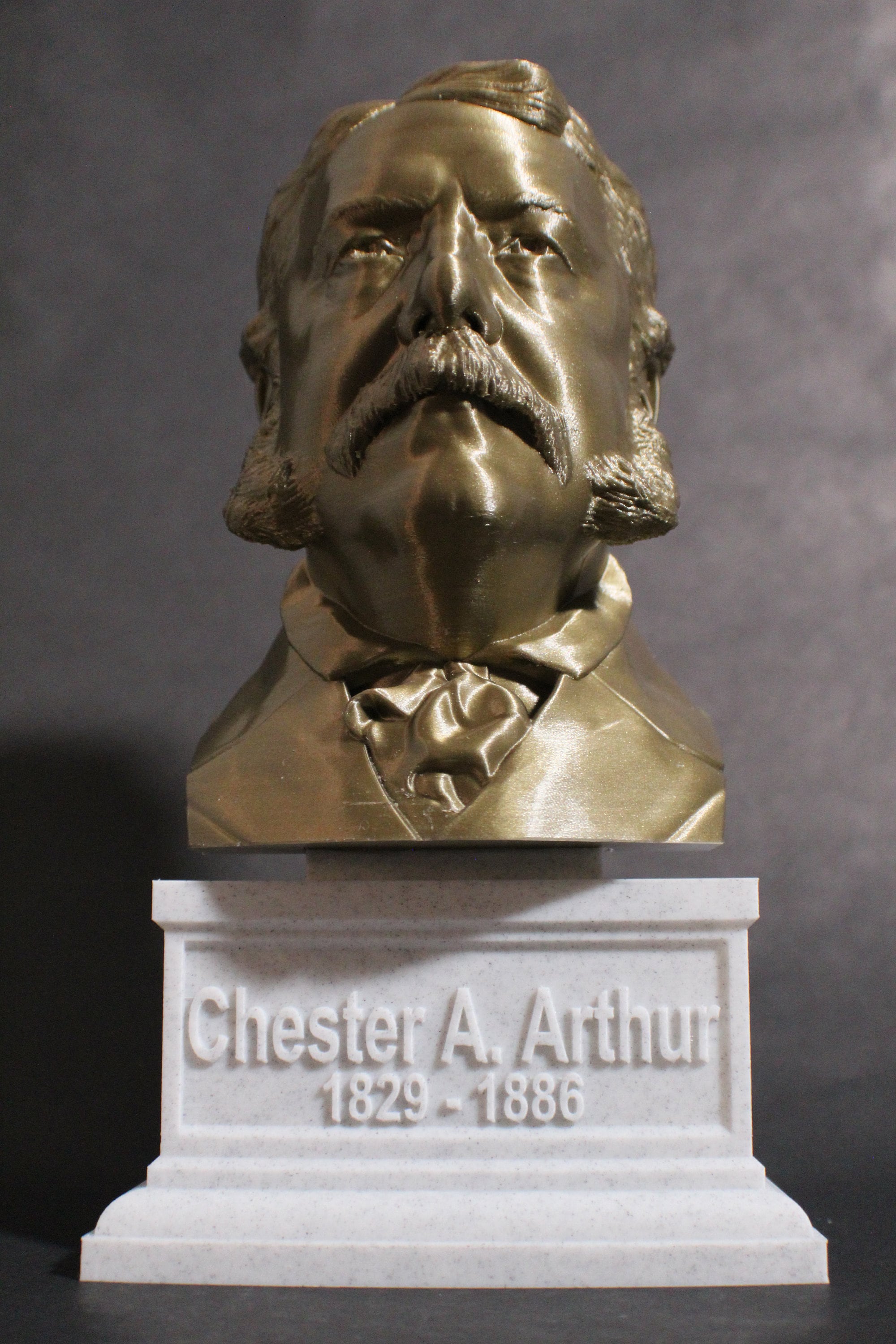 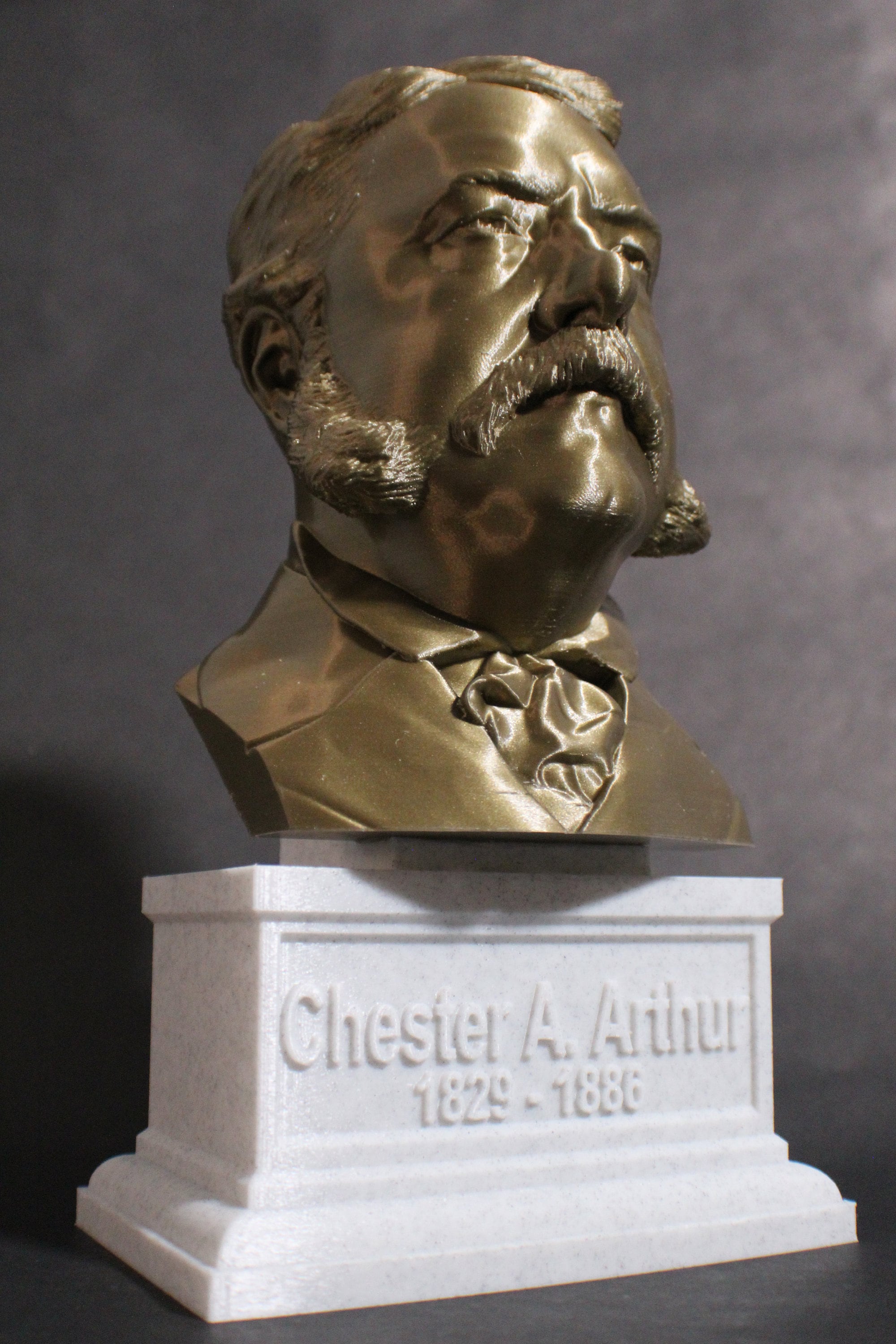 This 3D printed bust of Chester A. Arthur, the twenty-first United States President. This one is printed in a bronze and marble PLA, giving it a realistic metal/stone look and a surprise whenever someone picks it up to discover it's actual weight. It is more durable than alabaster or plaster, and is washable with lukewarm soapy water for easy spring cleaning. It comes on a custom plinth that has his lifetime on the front, and his dates in office as president on the back.

Chester Alan Arthur (October 5, 1829 – November 18, 1886) was an American attorney and politician who served as the 21st president of the United States from 1881 to 1885. He previously was the 20th vice president of the United States, and he succeeded to the presidency upon the death of President James A. Garfield in September 1881, two months after Garfield was shot by an assassin.

Arthur was born in Fairfield, Vermont, grew up in upstate New York, and practiced law in New York City. He served as quartermaster general of the New York Militia during the American Civil War. Following the war, he devoted more time to Republican politics and quickly rose in New York Senator Roscoe Conkling's political machine. Appointed by President Ulysses S. Grant to the lucrative and politically powerful post of Collector of the Port of New York in 1871, Arthur was an important supporter of Conkling and the Stalwart faction of the Republican Party. In 1878, the new president, Rutherford B. Hayes, fired Arthur as part of a plan to reform the federal patronage system in New York. When Garfield won the Republican nomination for president in 1880, Arthur, an eastern Stalwart, was nominated for vice president to balance the ticket. Four months into his term, Garfield was shot by an assassin; he died 11 weeks later, and Arthur assumed the presidency.

At the outset, Arthur struggled to overcome a negative reputation as a Stalwart and product of Conkling's machine. To the surprise of reformers, he took up the cause of civil service reform. Arthur advocated and enforced the Pendleton Civil Service Reform Act. He presided over the rebirth of the United States Navy, but was criticized for failing to alleviate the federal budget surplus, which had been accumulating since the end of the Civil War. Arthur signed the Chinese Exclusion Act, which resulted in denying citizenship to Chinese Americans until 1898 and barring Chinese immigration until 1943. Building on the 1875 Page Act, which barred Chinese women from entering the country, it was the first total ban on a nation or ethnic group from immigrating to the country.

Suffering from poor health, Arthur made only a limited effort to secure the Republican Party's nomination in 1884; he retired at the close of his term. Journalist Alexander McClure later wrote, "No man ever entered the Presidency so profoundly and widely distrusted as Chester Alan Arthur, and no one ever retired ... more generally respected, alike by political friend and foe."[2] Although his failing health and political temperament combined to make his administration less active than a modern presidency, he earned praise among contemporaries for his solid performance in office. The New York World summed up Arthur's presidency at his death in 1886: "No duty was neglected in his administration, and no adventurous project alarmed the nation."[3] Mark Twain wrote of him, "[I]t would be hard indeed to better President Arthur's administration."[4] Over the 20th and 21st centuries, however, Arthur's reputation mostly faded among the public.