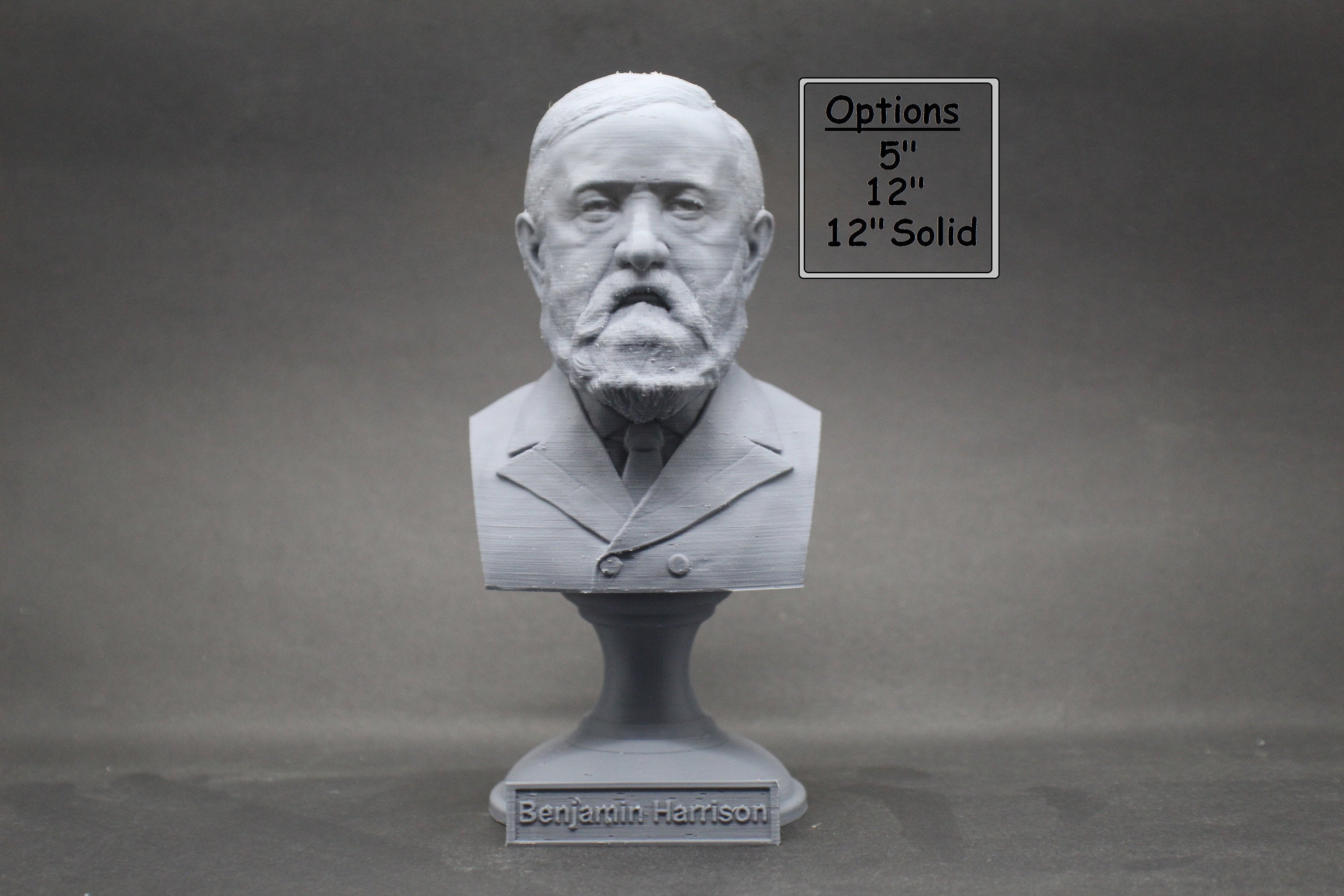 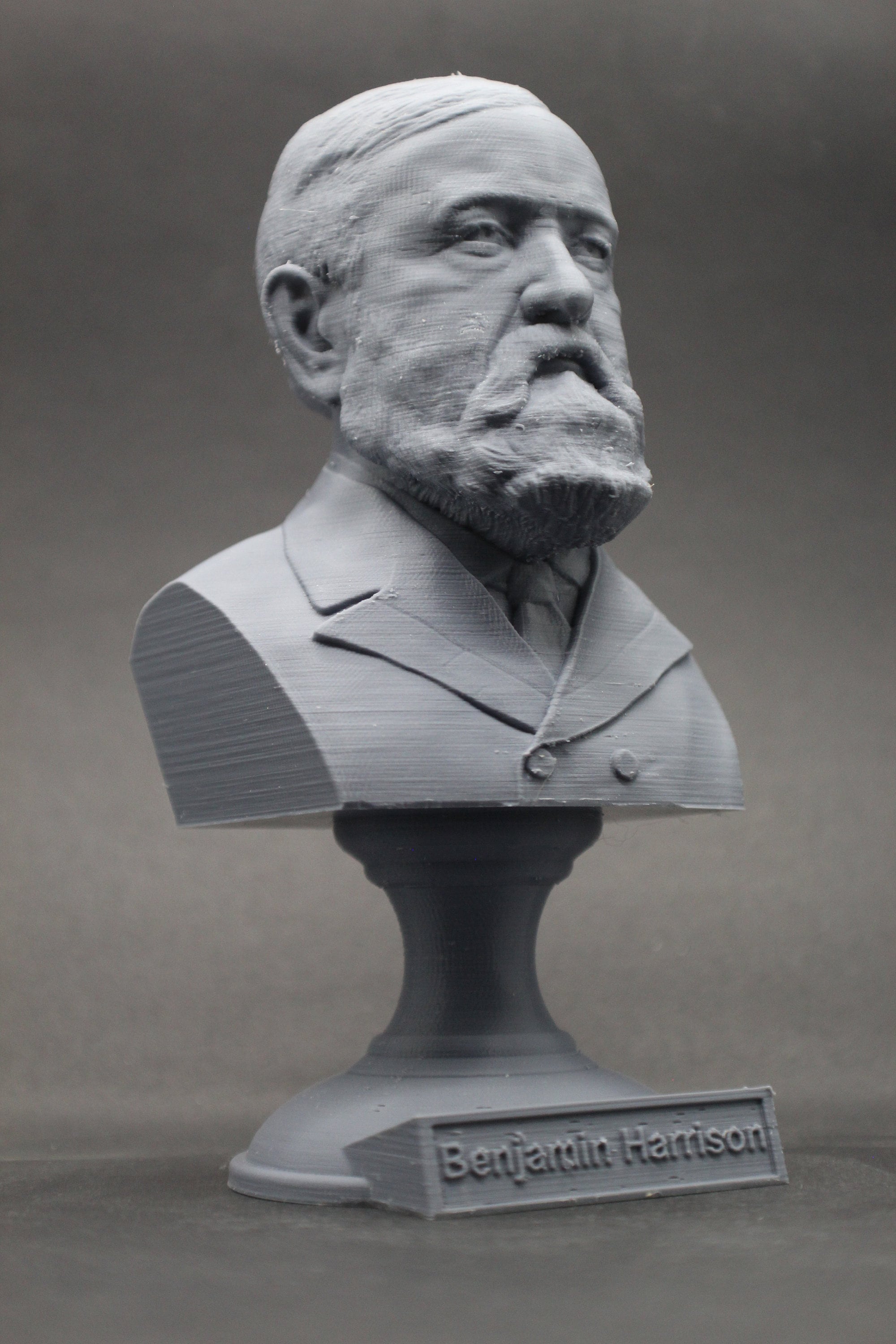 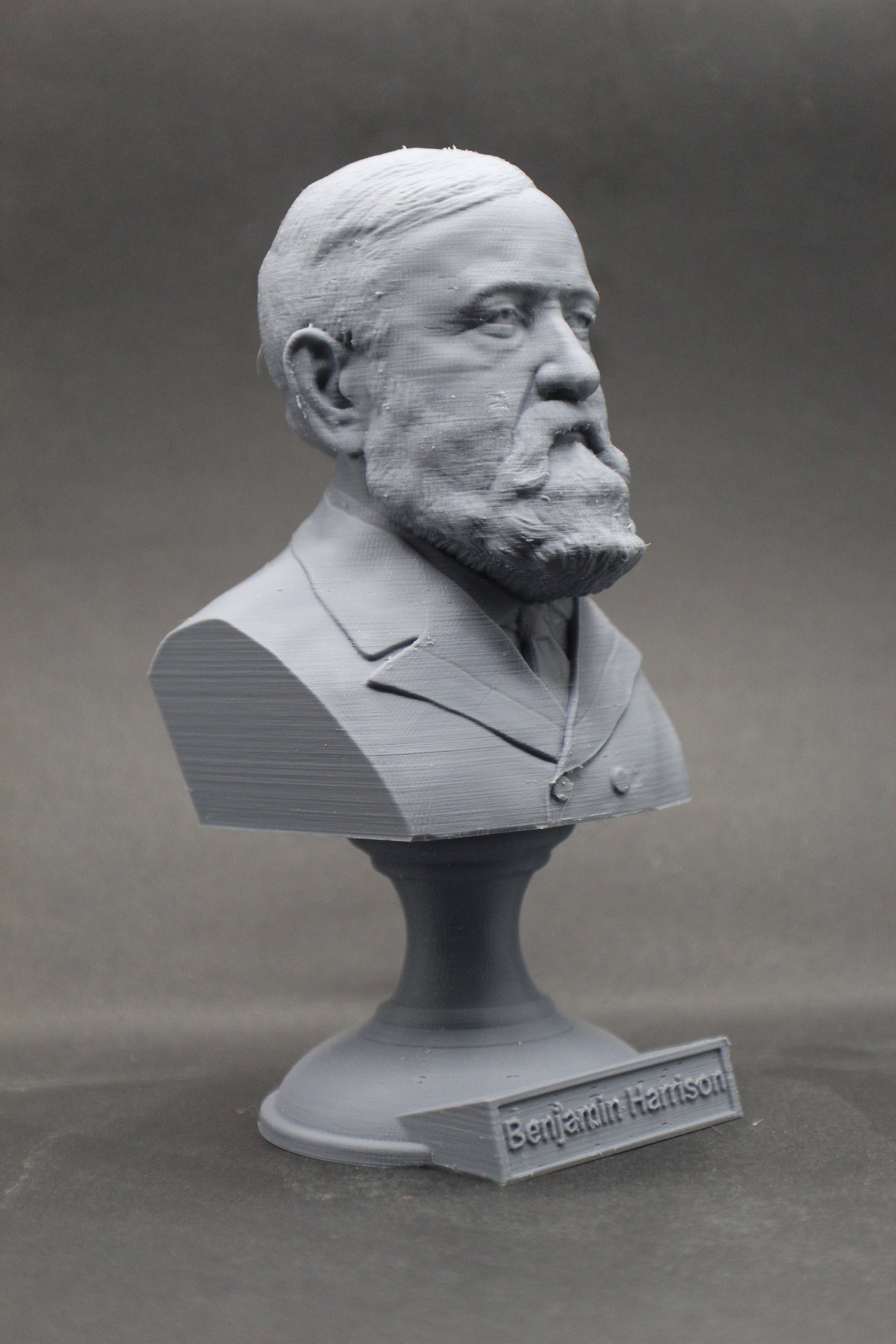 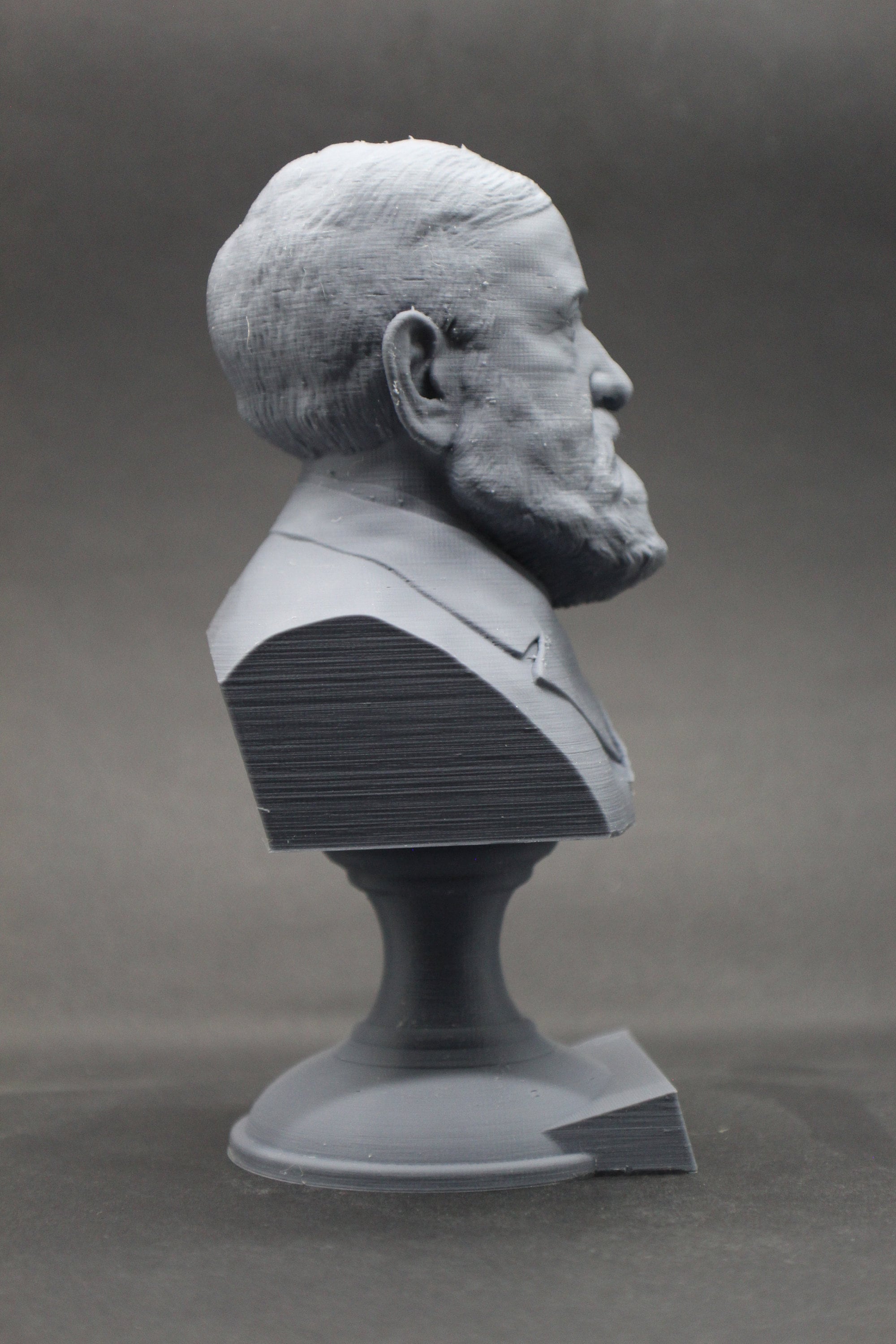 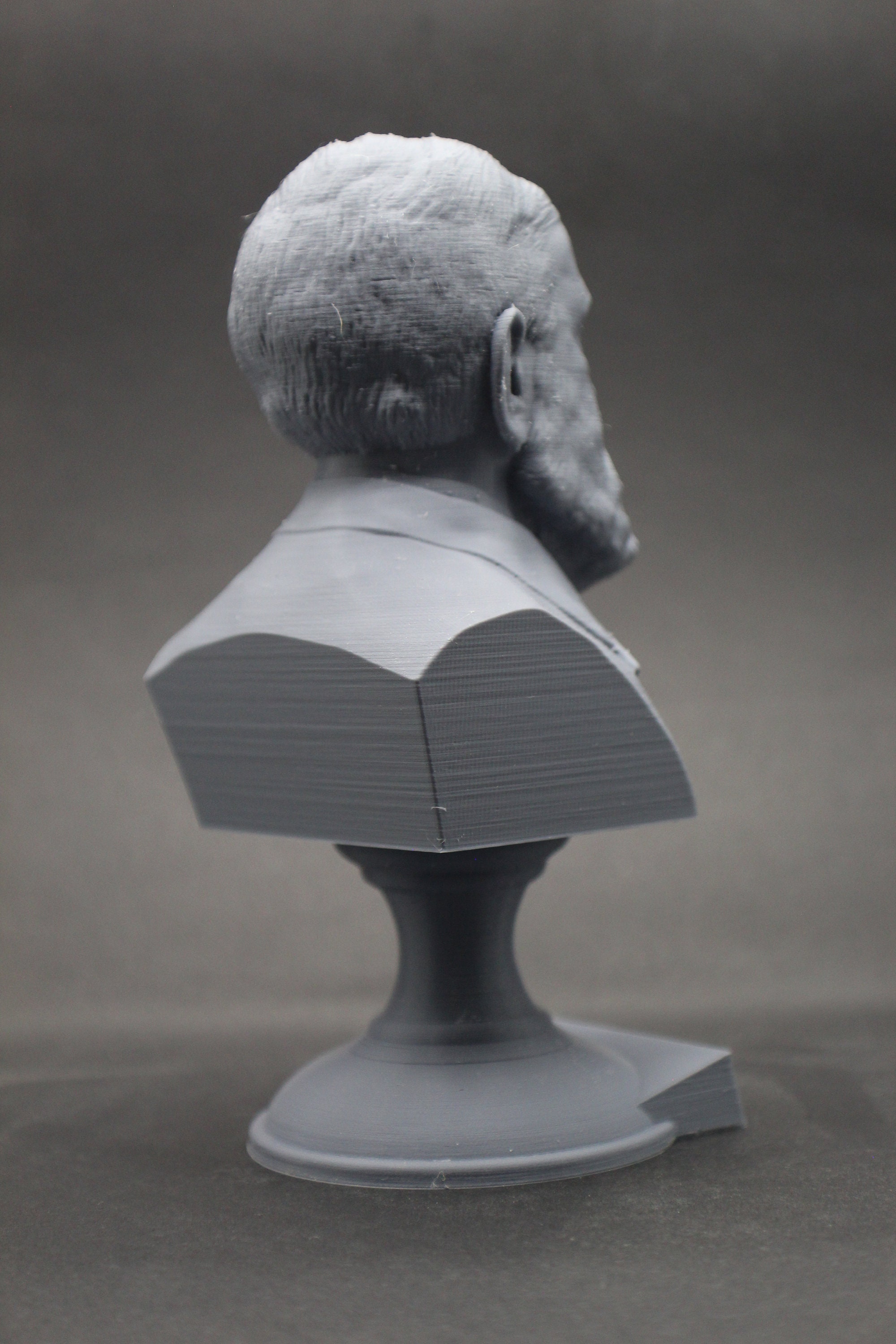 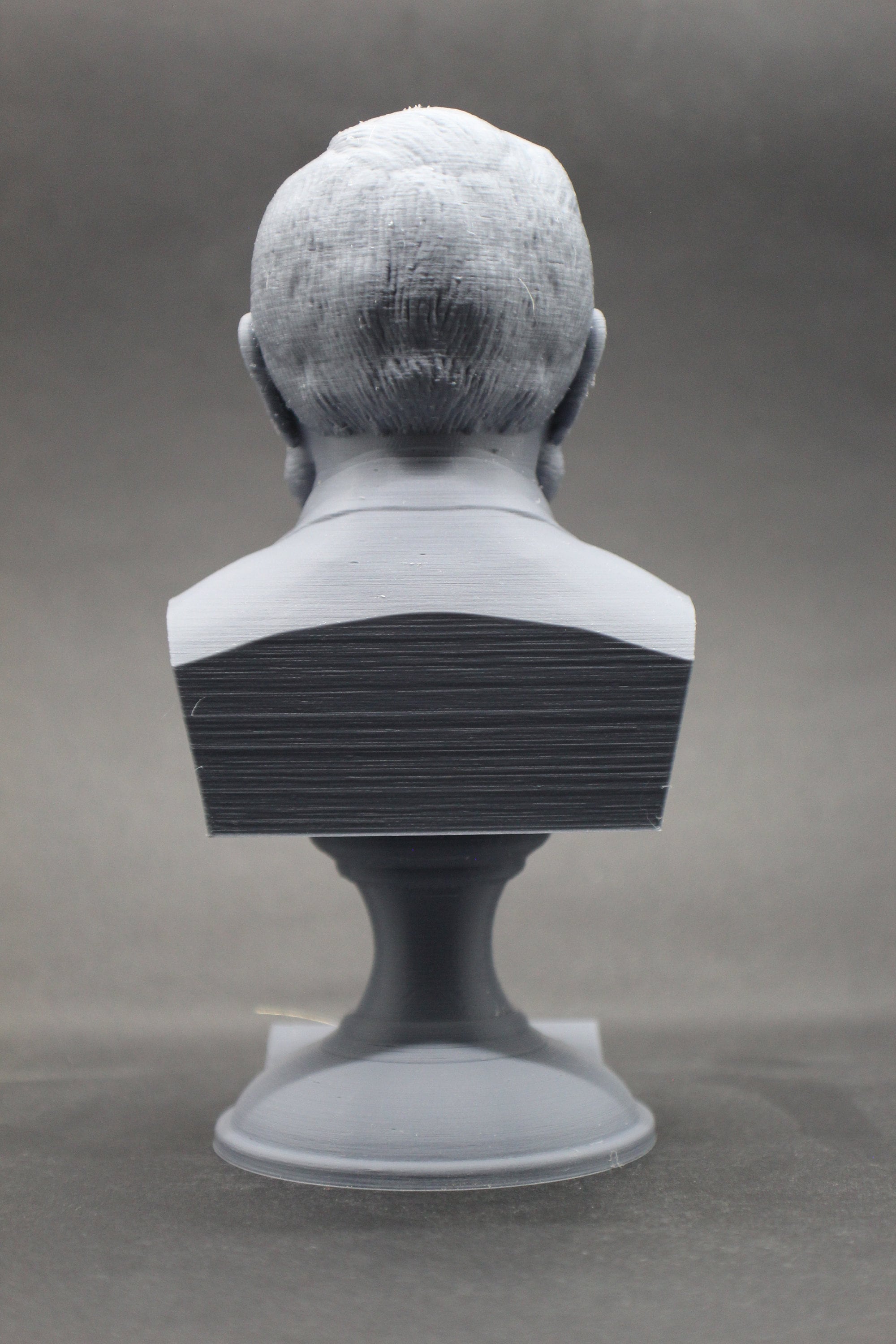 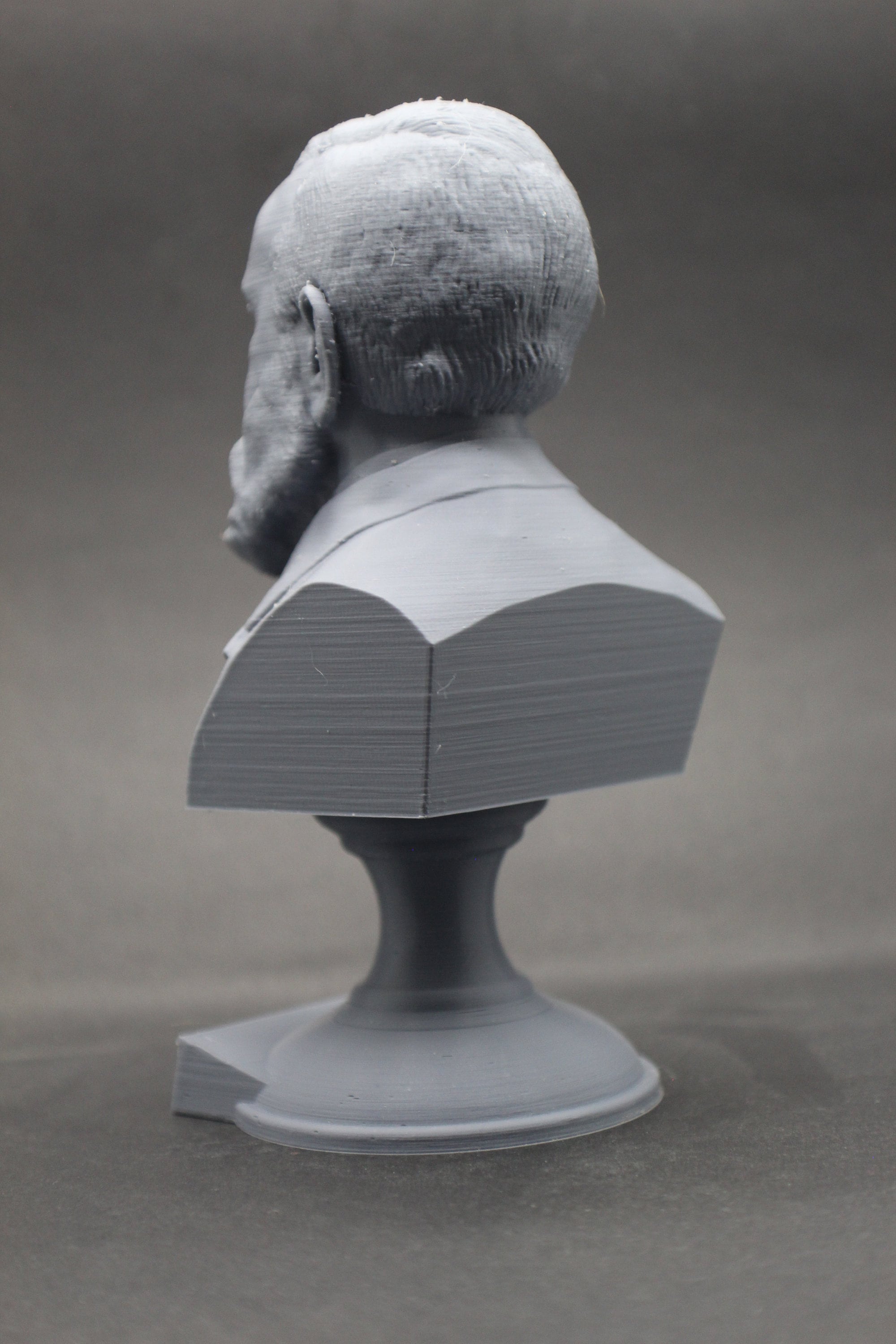 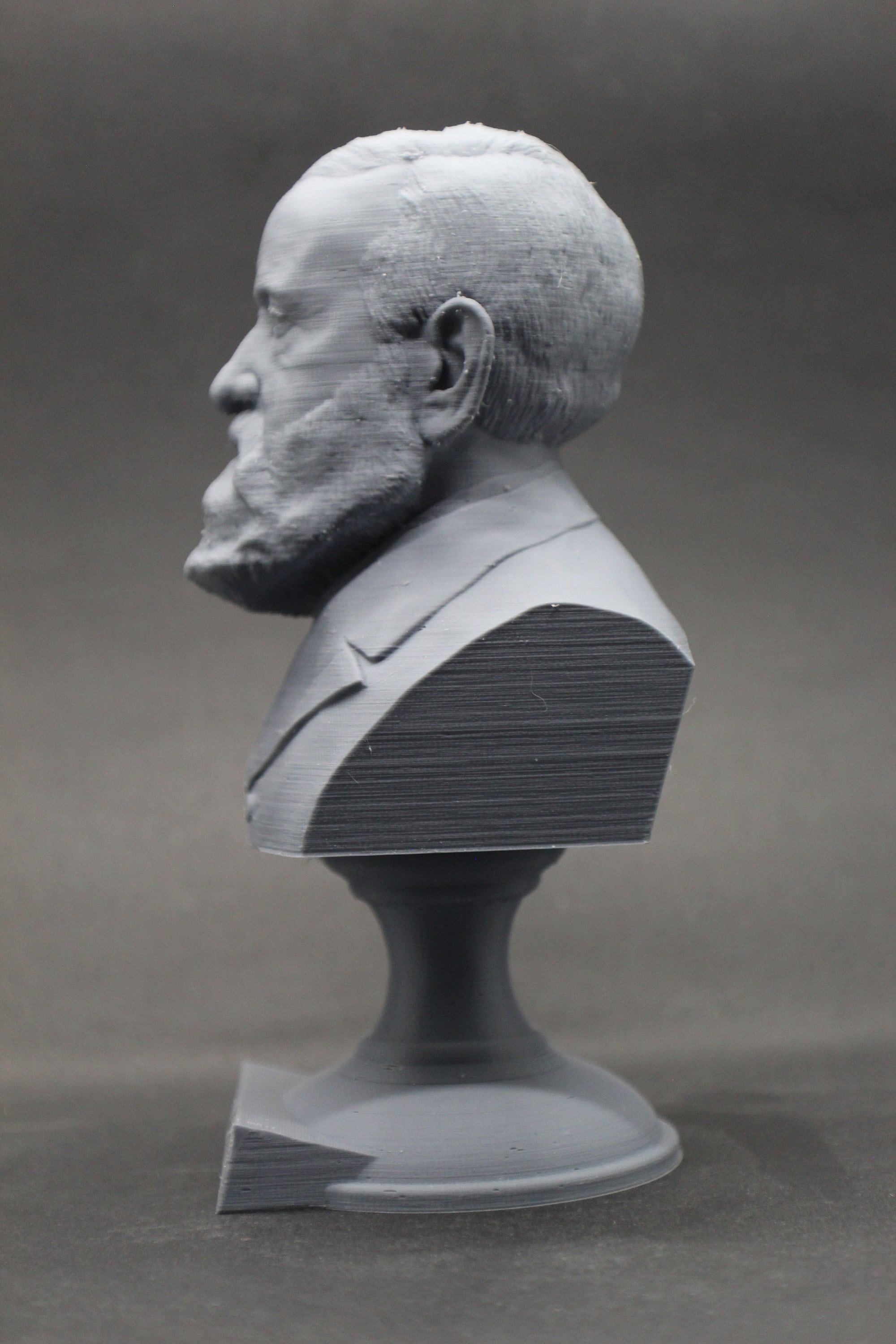 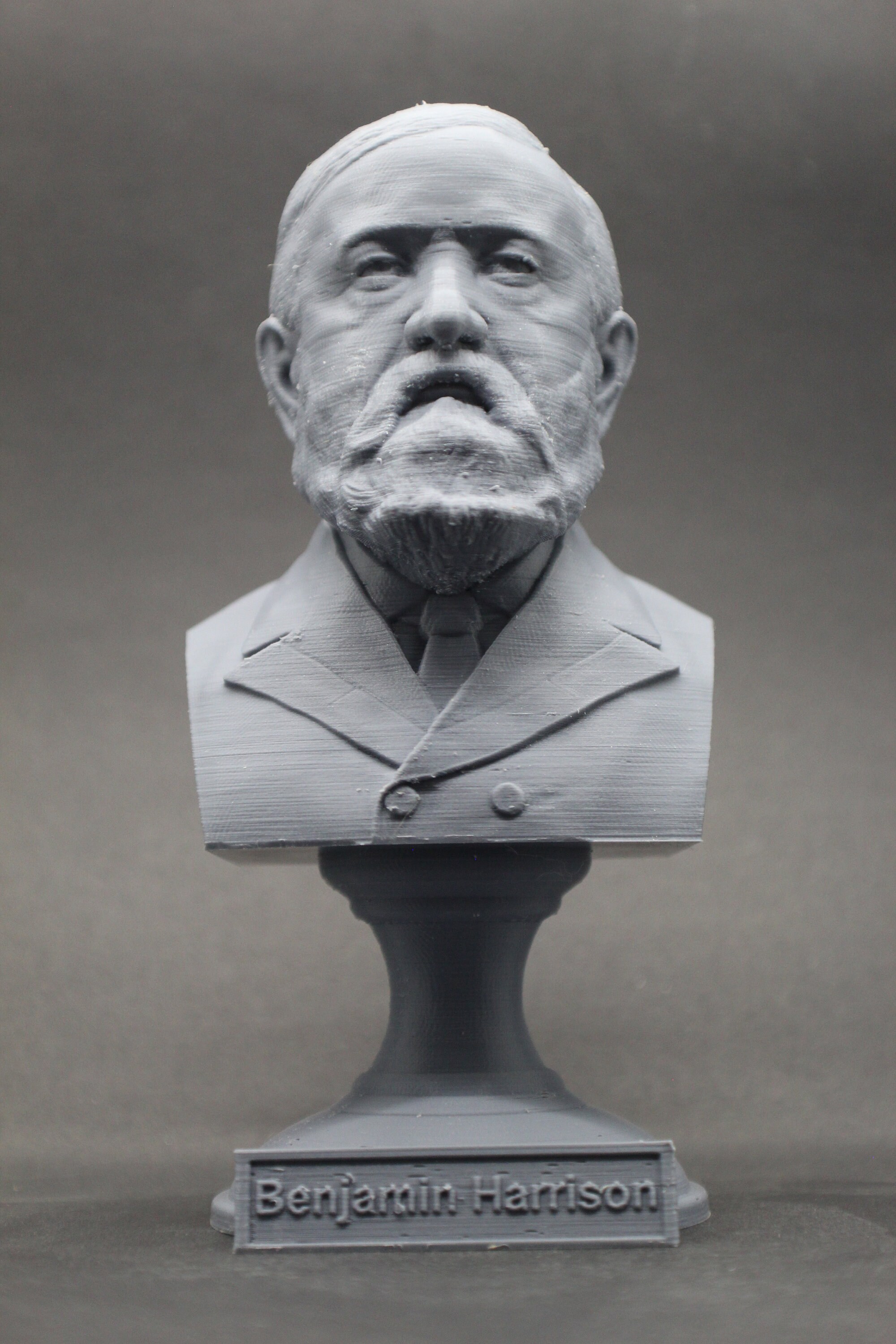 This 3D printed bust of Benjamin Harrison, the twenty-third United States President. This one is printed in a gray PLA, giving it a detailed look and a surprise whenever someone picks it up to discover it's actual weight. It is more durable than alabaster or plaster, and is washable with lukewarm soapy water for easy spring cleaning. It comes on a custom plinth that has his name on the front.

Benjamin Harrison (August 20, 1833 – March 13, 1901) was an American politician and lawyer who served as the 23rd president of the United States from 1889 to 1893. He was a grandson of the ninth president, William Henry Harrison, creating the only grandfather–grandson duo to have held the office. He was also a great-grandson of Benjamin Harrison V, a founding father who signed the United States Declaration of Independence. Before ascending to the presidency, Harrison had established himself as a prominent local attorney, Presbyterian church leader, and politician in Indianapolis, Indiana. During the American Civil War, he served in the Union Army as a colonel, and was confirmed by the U.S. Senate as a brevet brigadier general of volunteers in 1865. Harrison unsuccessfully ran for governor of Indiana in 1876. The Indiana General Assembly elected Harrison to a six-year term in the U.S. Senate, where he served from 1881 to 1887.

A Republican, Harrison was elected to the presidency in 1888, defeating the Democratic incumbent, Grover Cleveland. Hallmarks of Harrison's administration included unprecedented economic legislation, including the McKinley Tariff, which imposed historic protective trade rates, and the Sherman Antitrust Act. Harrison also facilitated the creation of the national forest reserves through an amendment to the Land Revision Act of 1891. During his administration six western states were admitted to the Union. In addition, Harrison substantially strengthened and modernized the U.S. Navy and conducted an active foreign policy, but his proposals to secure federal education funding as well as voting rights enforcement for African Americans were unsuccessful.

Due in large part to surplus revenues from the tariffs, federal spending reached one billion dollars for the first time during his term. The spending issue in part led to the defeat of the Republicans in the 1890 mid-term elections. Cleveland defeated Harrison for re-election in 1892, due to the growing unpopularity of the high tariff and high federal spending. Harrison returned to private life and his law practice in Indianapolis. In 1899 Harrison represented the Republic of Venezuela in their British Guiana boundary dispute against the United Kingdom. Harrison traveled to the court of Paris as part of the case and after a brief stay returned to Indianapolis. He died at his home in Indianapolis in 1901 of complications from influenza. Although many have praised Harrison's commitment to African Americans' voting rights, scholars and historians generally regard his administration as below-average, and rank him in the bottom half among U.S. presidents. Historians, however, have not questioned Harrison's commitment to personal and official integrity.

My grandson and I are visiting all the presidential libraries and he is collecting the respective Royal Bobbleheads. We also take the opportunity to visit other nearby presidential sites which normally don't have bobbleheads. These 3D printed busts are the perfect companion pieces. Their features are detailed making them readily recognizable. The $13 price is reasonable. And they are an enduring souvenir of our travels. The shop responded quickly to my order and I received it within five days. We plan on adding many more to his collection.