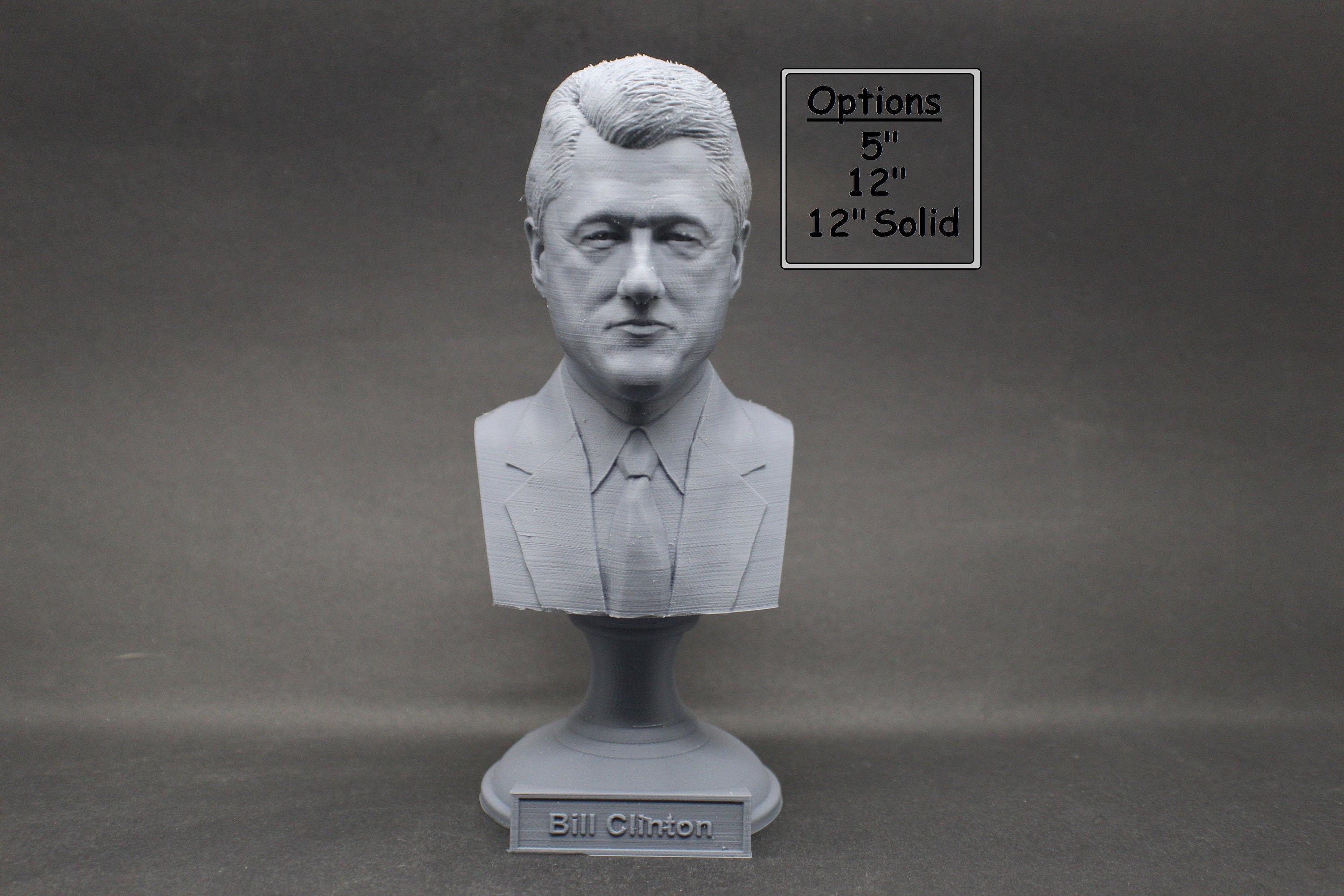 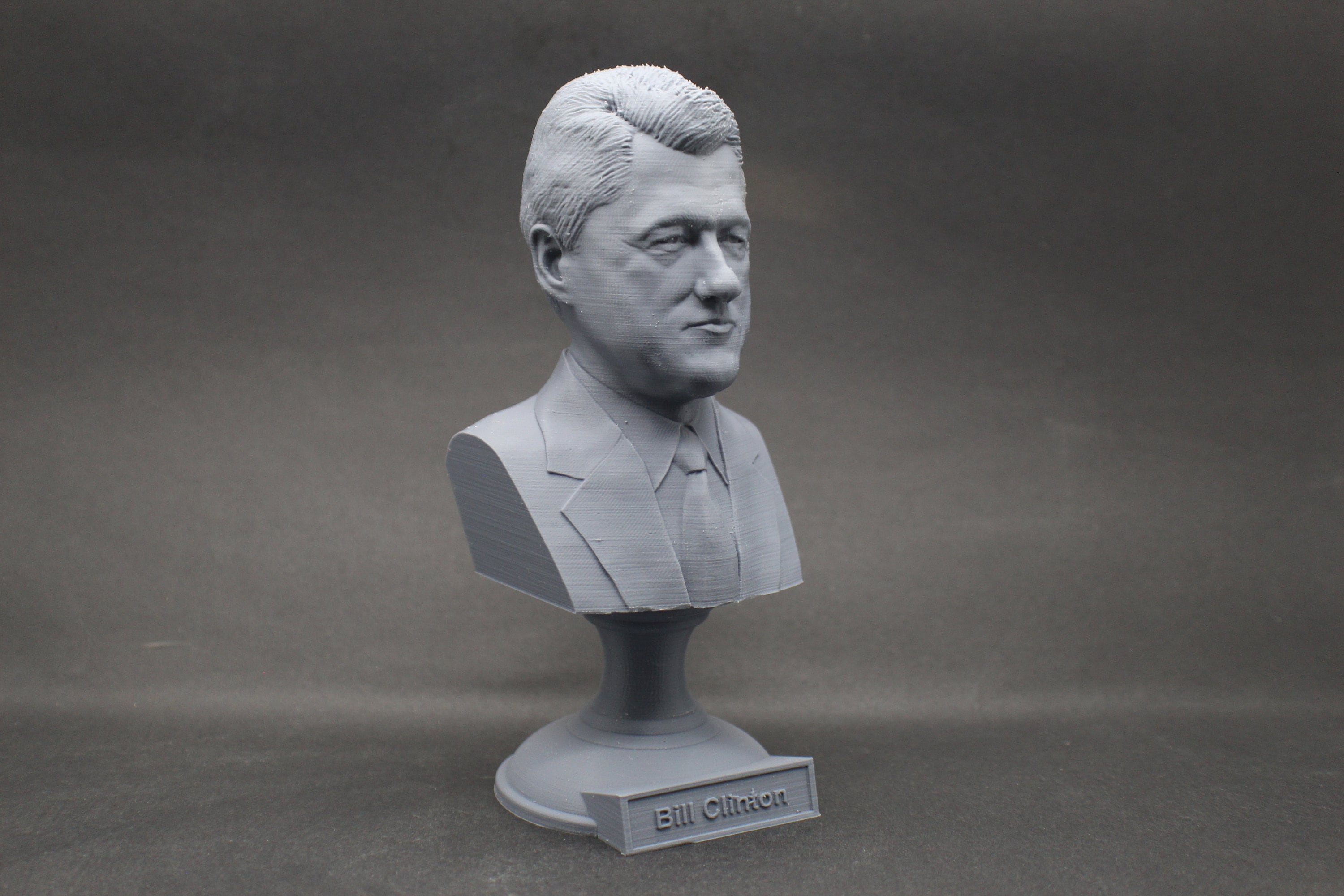 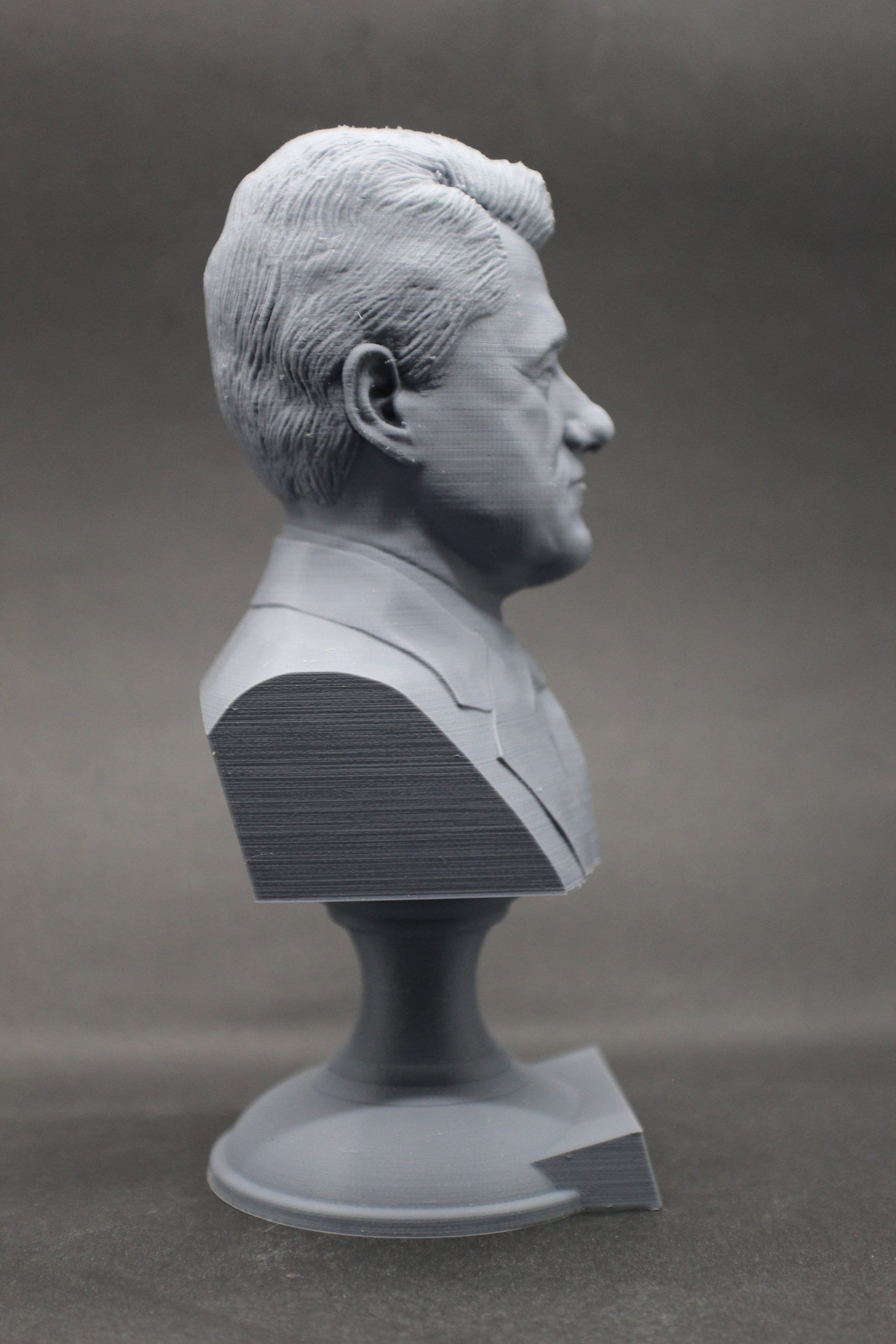 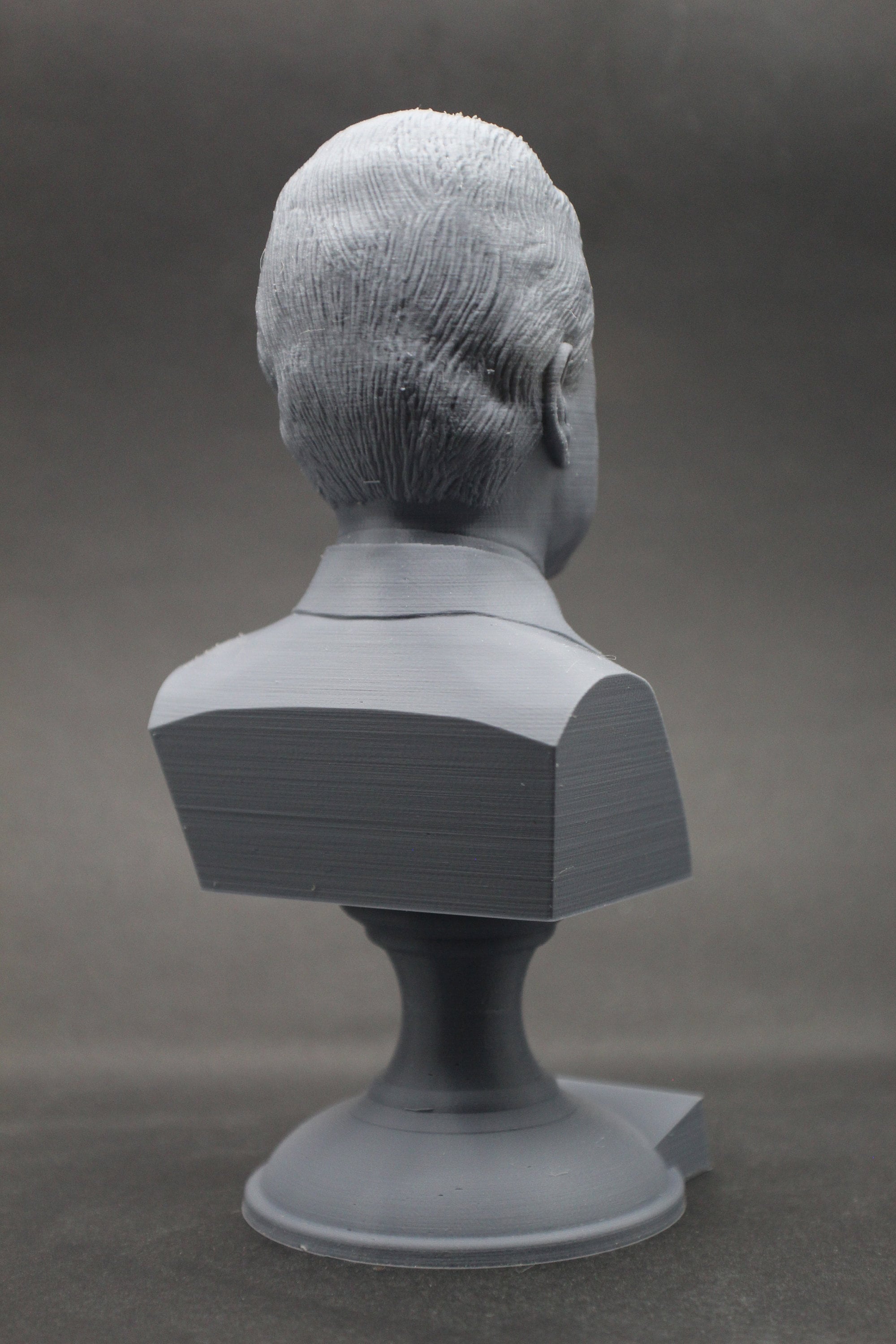 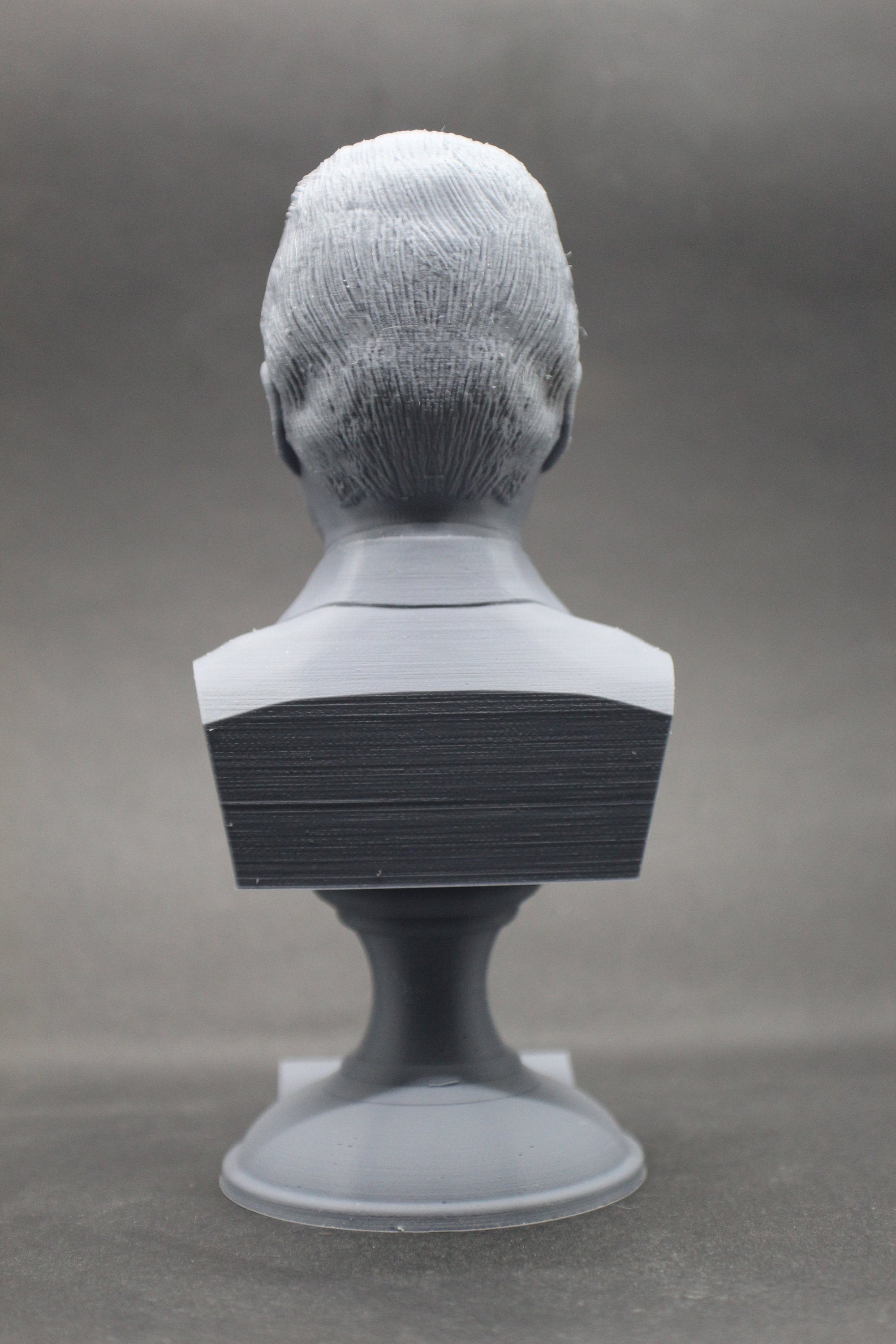 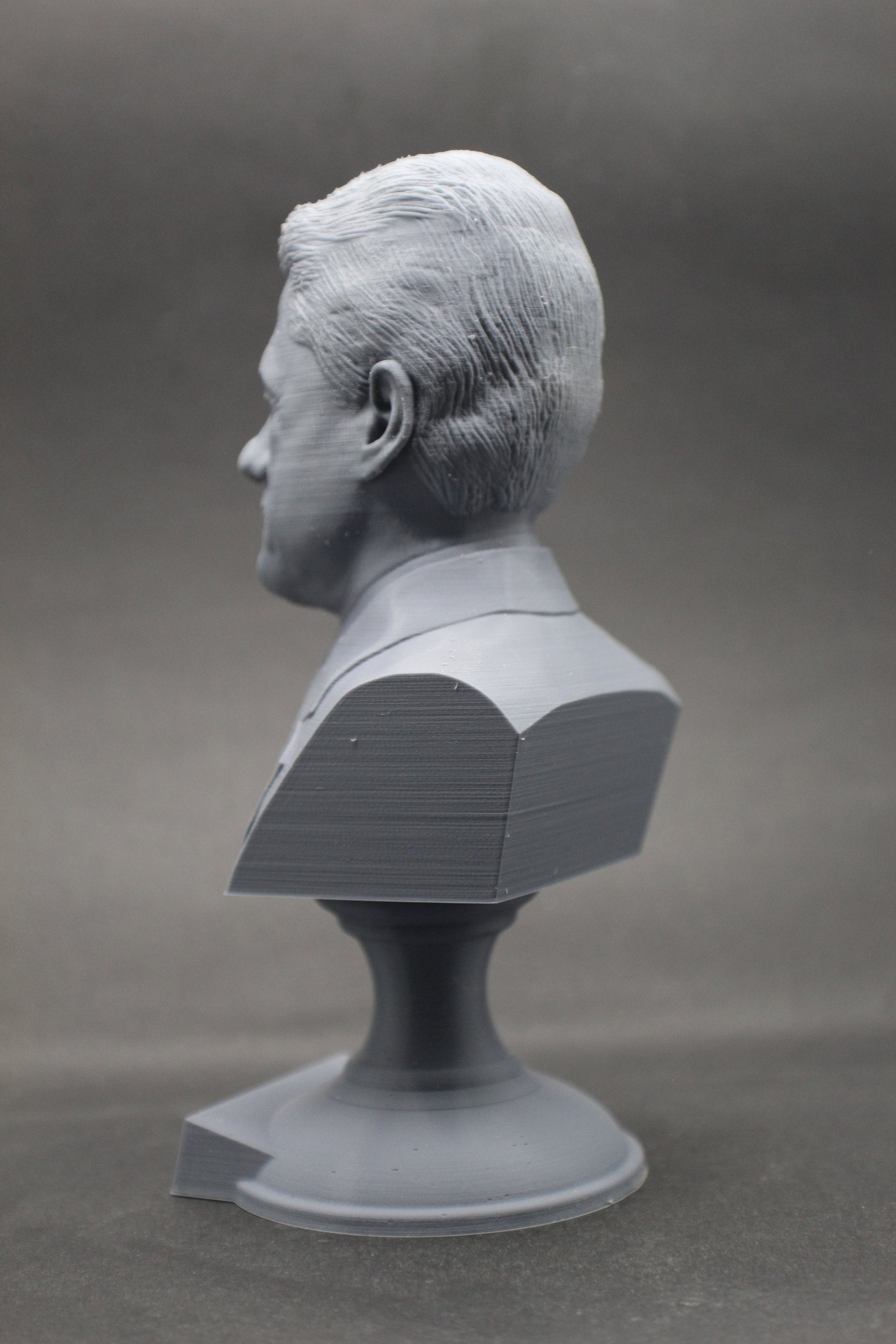 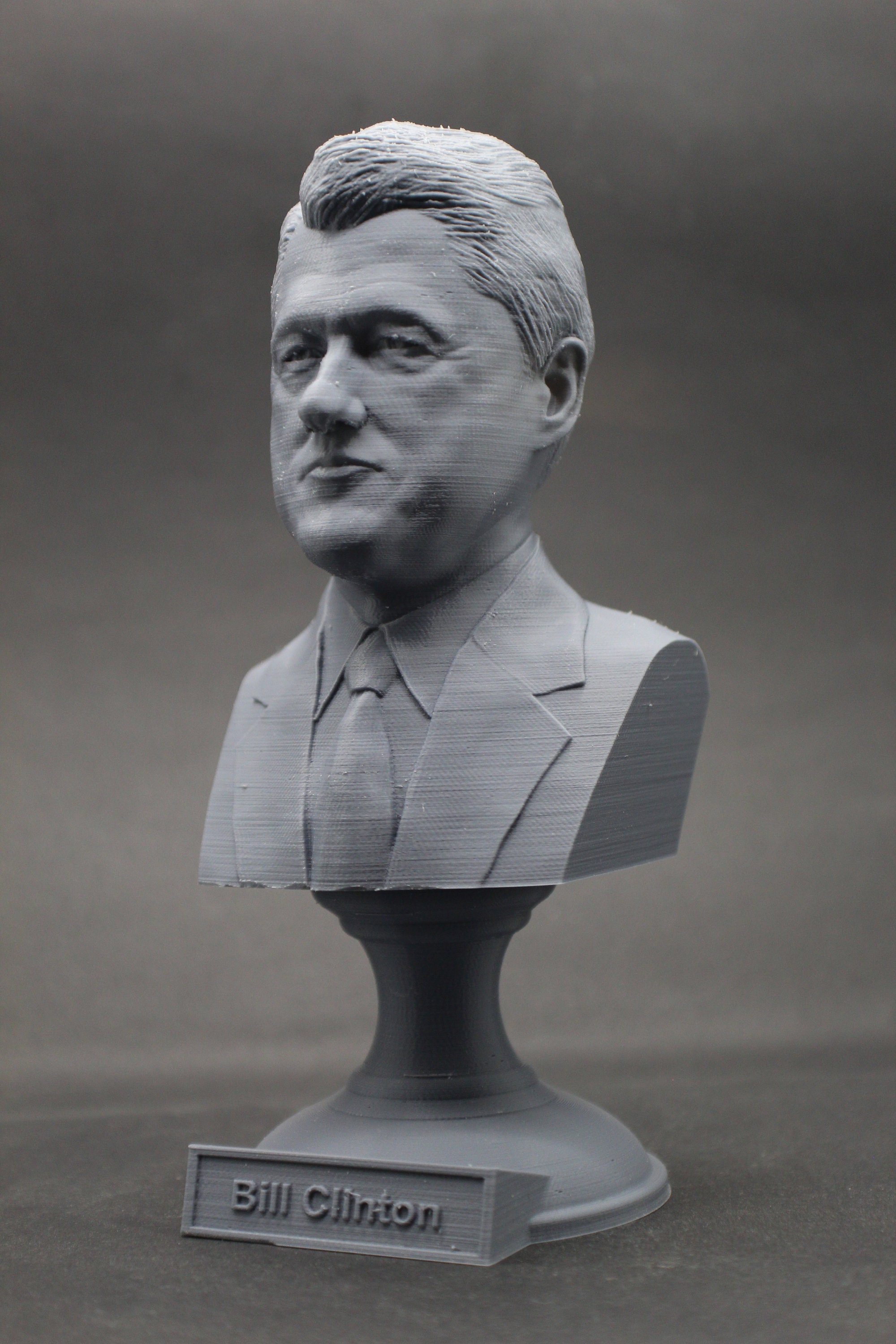 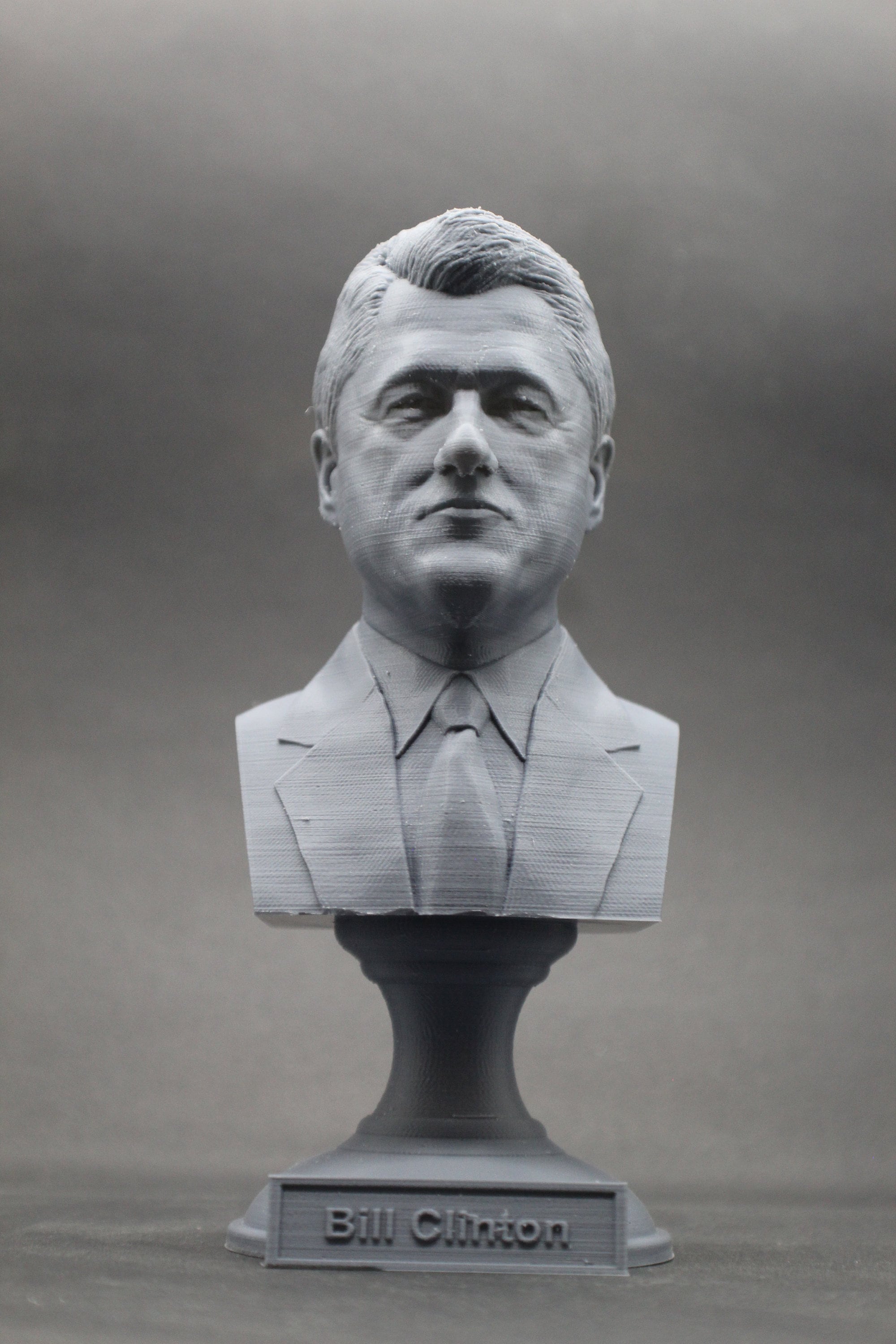 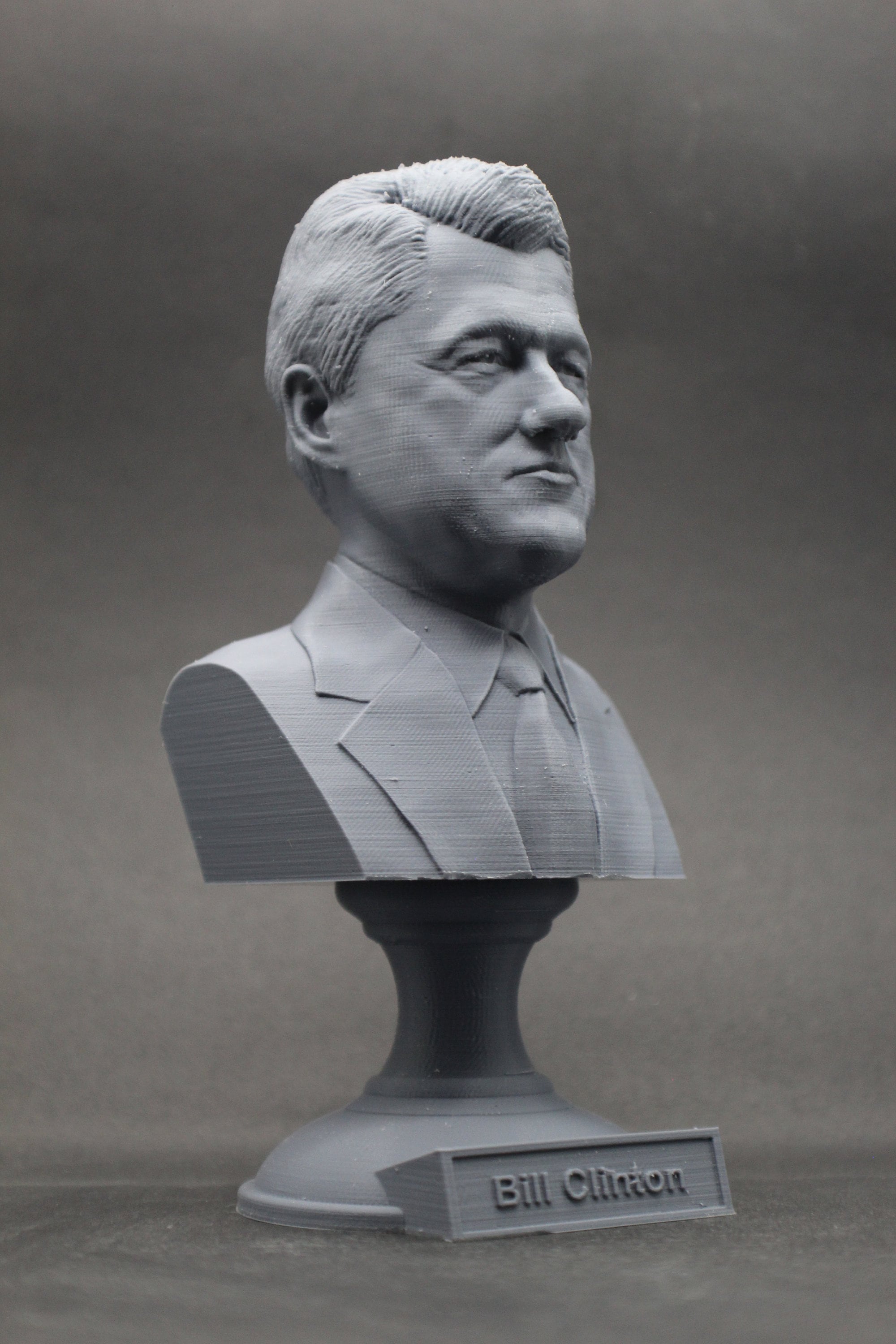 This 3D printed bust of Bill Clinton, the forty-second United States President. This one is printed in a gray PLA, giving it a detailed look and a surprise whenever someone picks it up to discover it's actual weight. It is more durable than alabaster or plaster, and is washable with lukewarm soapy water for easy spring cleaning. It comes on a custom plinth that has his name on the front.

William Jefferson Clinton (born William Jefferson Blythe III; August 19, 1946) is an American politician who served as the 42nd president of the United States from 1993 to 2001. Prior to his presidency, he served as governor of Arkansas (1979–1981 and 1983–1992) and as attorney general of Arkansas (1977–1979). A member of the Democratic Party, Clinton was known as a New Democrat, and many of his policies reflected a centrist "Third Way" political philosophy. He is the husband of former Secretary of State and former U.S. Senator Hillary Clinton. In 1998, Clinton was impeached by the House of Representatives. The impeachment was based on accusations that Clinton committed perjury and obstruction of justice for the purpose of concealing his affair with Monica Lewinsky, a 22-year-old White House intern. He was acquitted by the Senate and completed his term in office. Clinton is notable as one of only two U.S. presidents (following Andrew Johnson 130 years earlier) to have been impeached.

Clinton was born and raised in Arkansas and attended Georgetown University, University College, Oxford, and Yale Law School. He met Hillary Rodham at Yale and married her in 1975. After graduating from law school, Clinton returned to Arkansas and won election as the Attorney General of Arkansas, serving from 1977 to 1979. He later served as governor of Arkansas. As governor, he overhauled the state's education system and served as chairman of the National Governors Association. Clinton was elected president in 1992, defeating incumbent Republican opponent George H. W. Bush. At age 46, he became the third-youngest president in history.

Clinton presided over the longest period of peacetime economic expansion in American history. He signed into law the North American Free Trade Agreement, but failed to pass his plan for national health care reform. In the 1994 elections, the Republican Party won unified control of the Congress for the first time in 40 years. In 1996, Clinton became the first Democrat since Franklin D. Roosevelt to be elected to a second full term. He passed welfare reform and the State Children's Health Insurance Program, as well as financial deregulation measures. During the last three years of Clinton's presidency, the Congressional Budget Office reported a budget surplus—the first such surplus since 1969. In foreign policy, Clinton ordered U.S. military intervention in the Bosnian and Kosovo wars, signed the Iraq Liberation Act in opposition to Saddam Hussein, participated in the 2000 Camp David Summit to advance the Israeli–Palestinian peace process, and assisted the Northern Ireland peace process.

Clinton left office with the highest end-of-office approval rating of any U.S. president since World War II, and has continually received high scores in the historical rankings of U.S. presidents. Since leaving office, he has been involved in public speaking and humanitarian work. He created the William J. Clinton Foundation to address international causes such as the prevention of AIDS and global warming. In 2004, Clinton published his autobiography, My Life. In 2009, he was named the United Nations Special Envoy to Haiti and after the 2010 Haiti earthquake, he teamed with George W. Bush to form the Clinton Bush Haiti Fund. In addition, he secured the release of two American journalists imprisoned by North Korea, visiting the capital Pyongyang in 2009 and negotiating their release with then-North Korean leader Kim Jong-il.