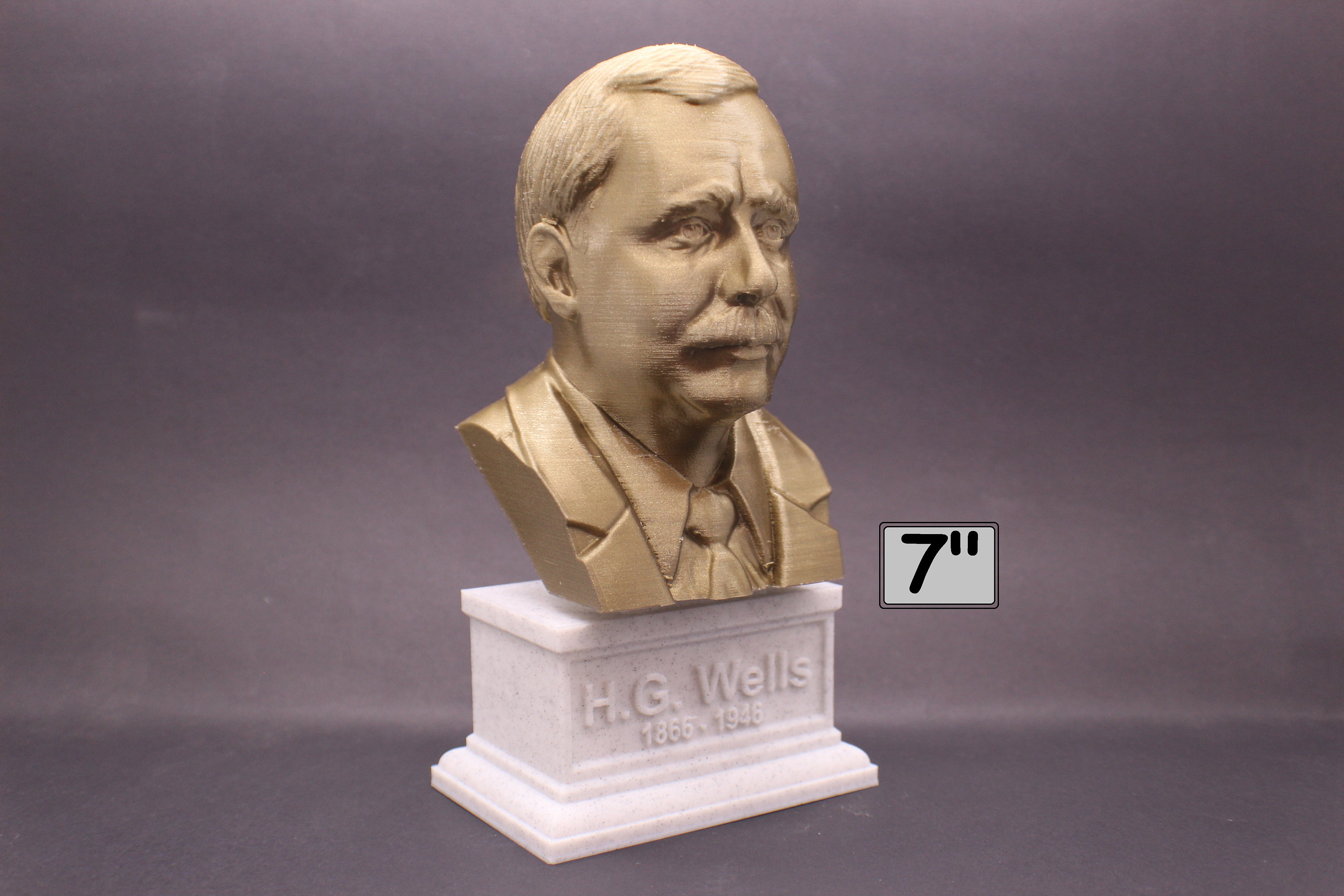 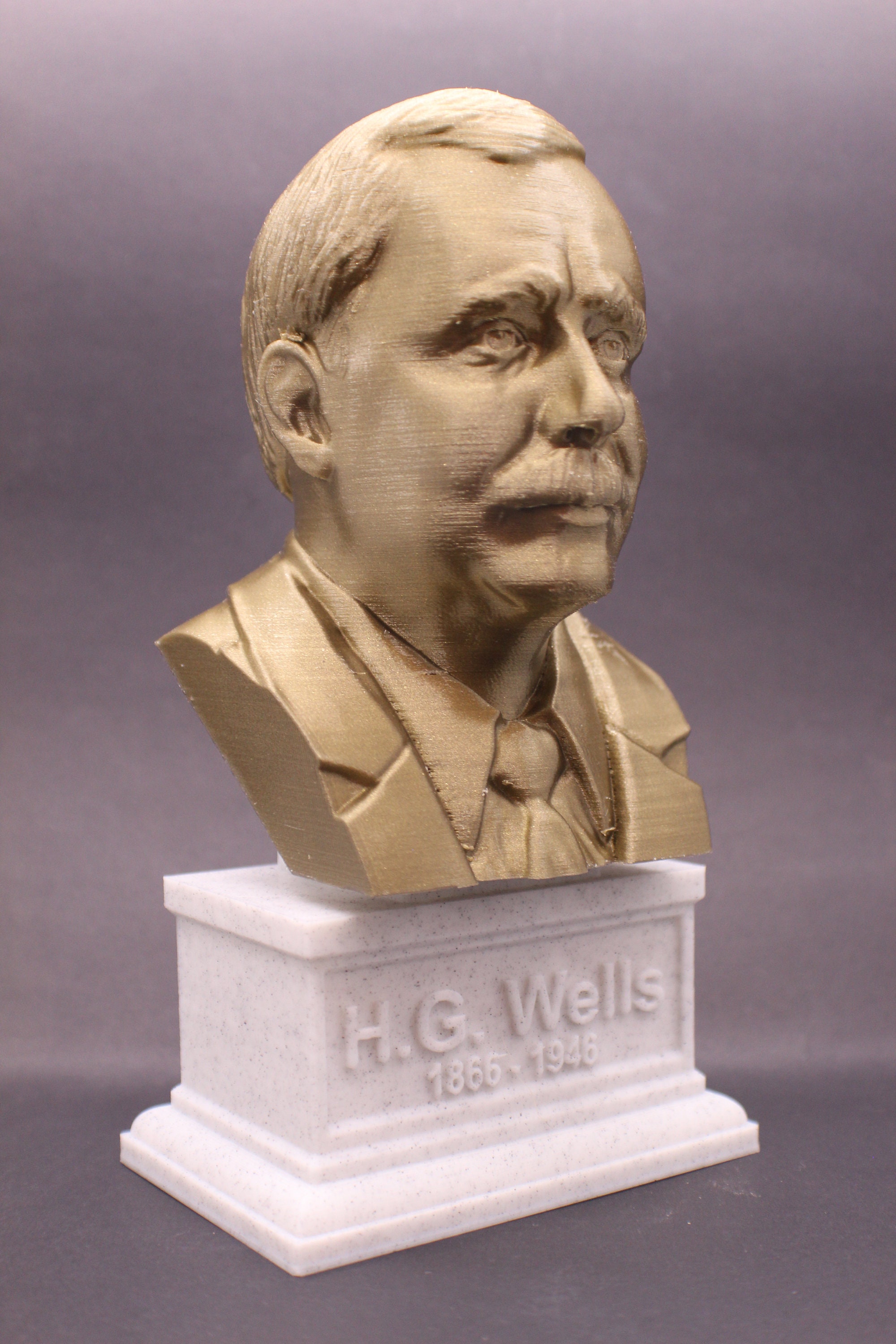 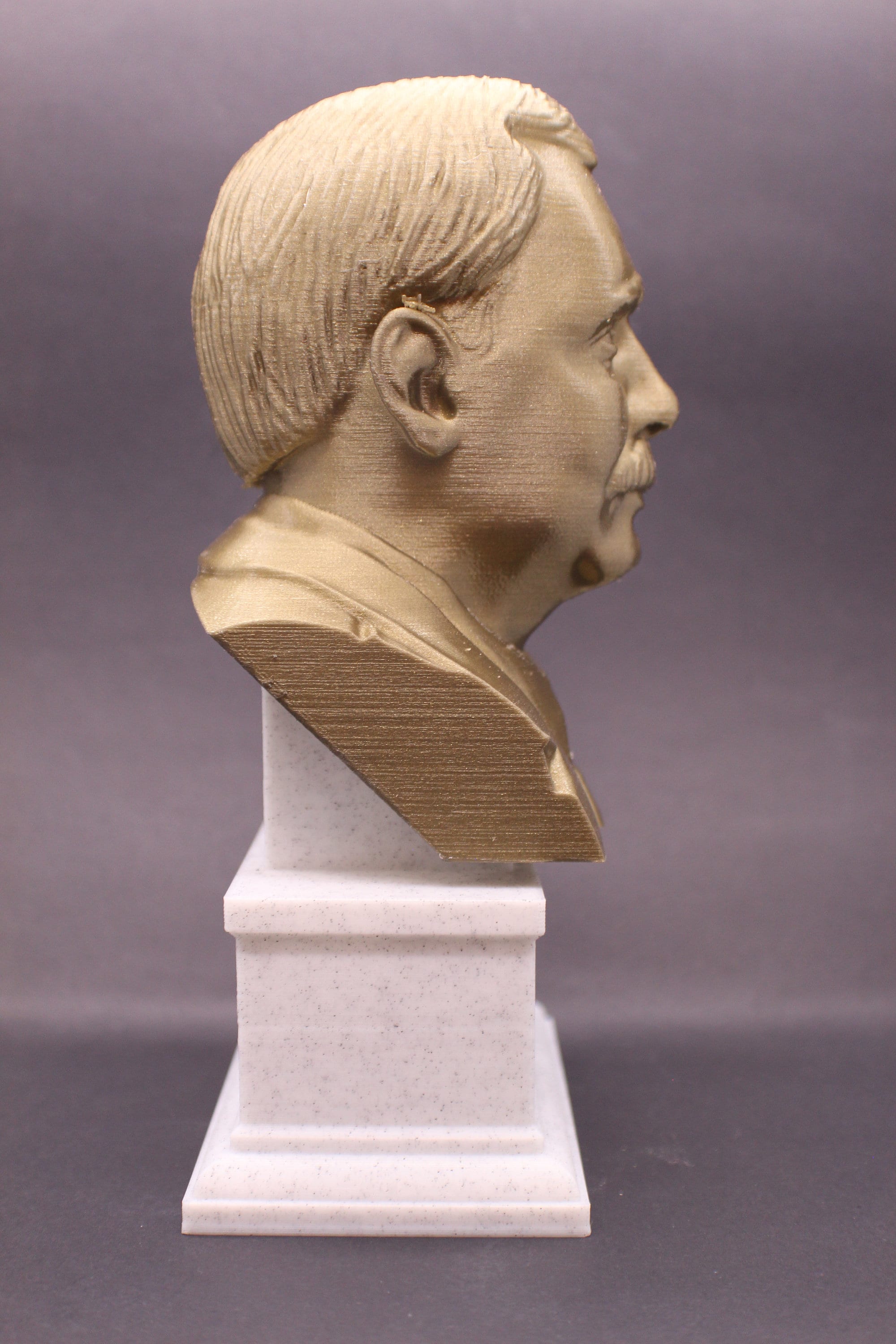 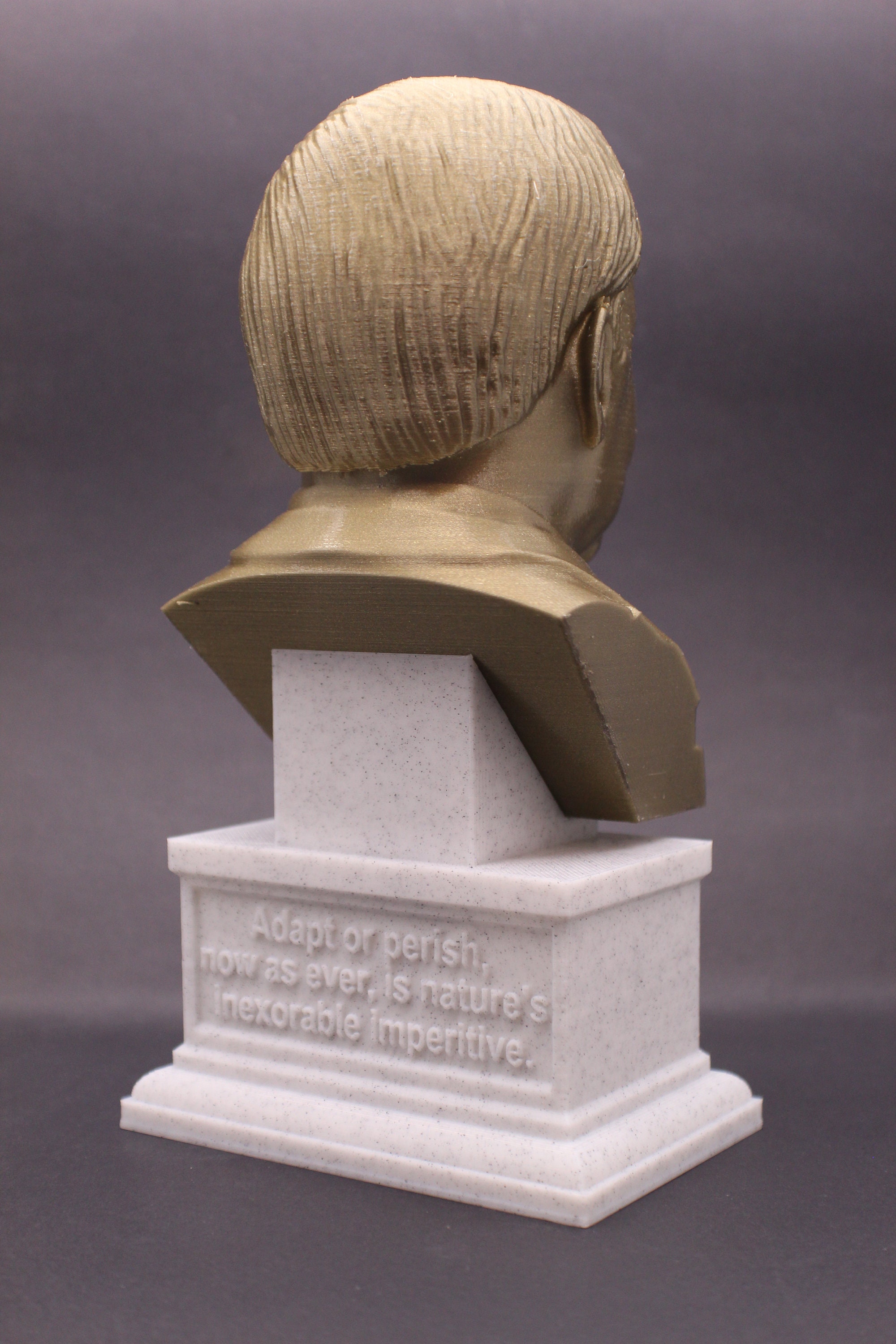 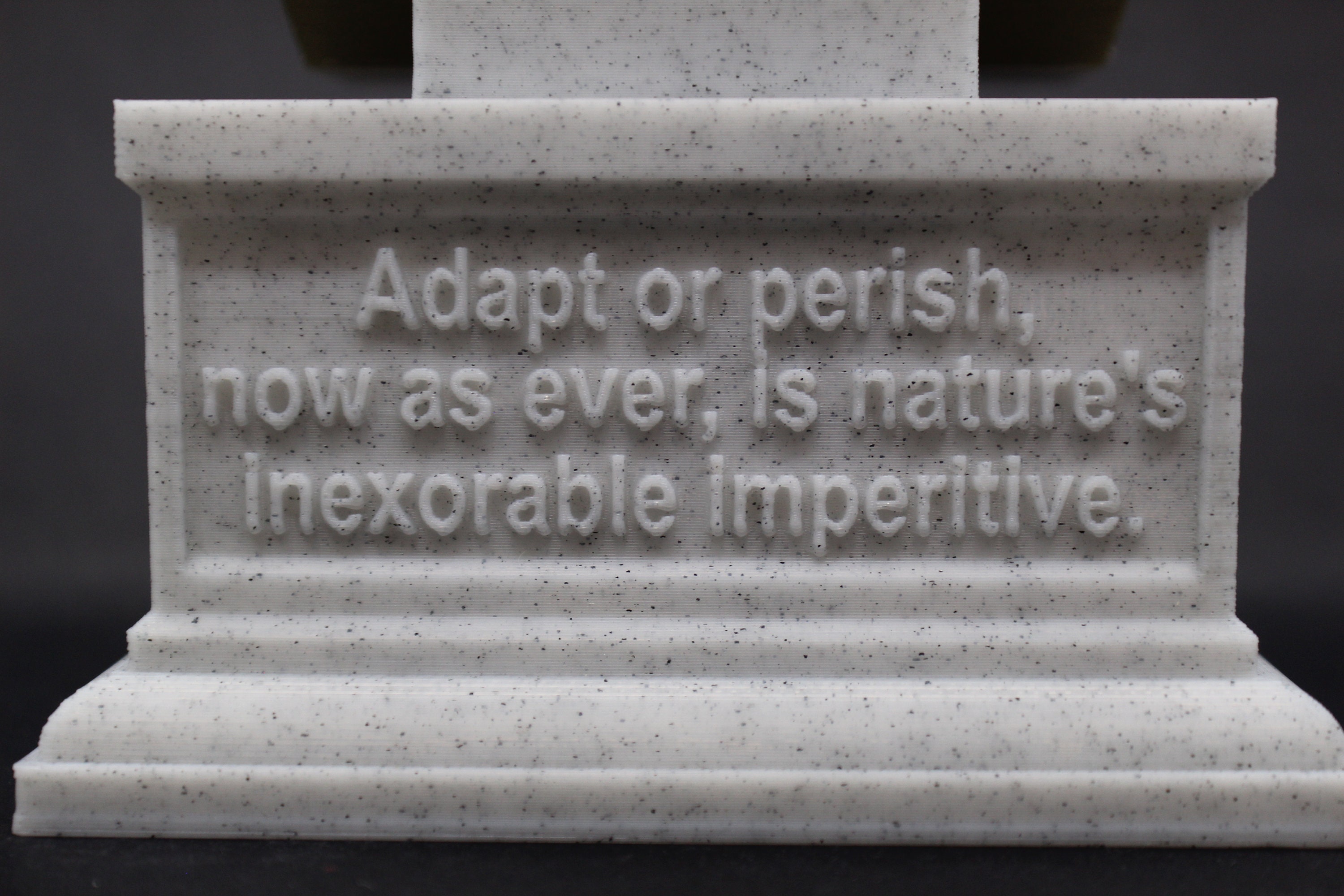 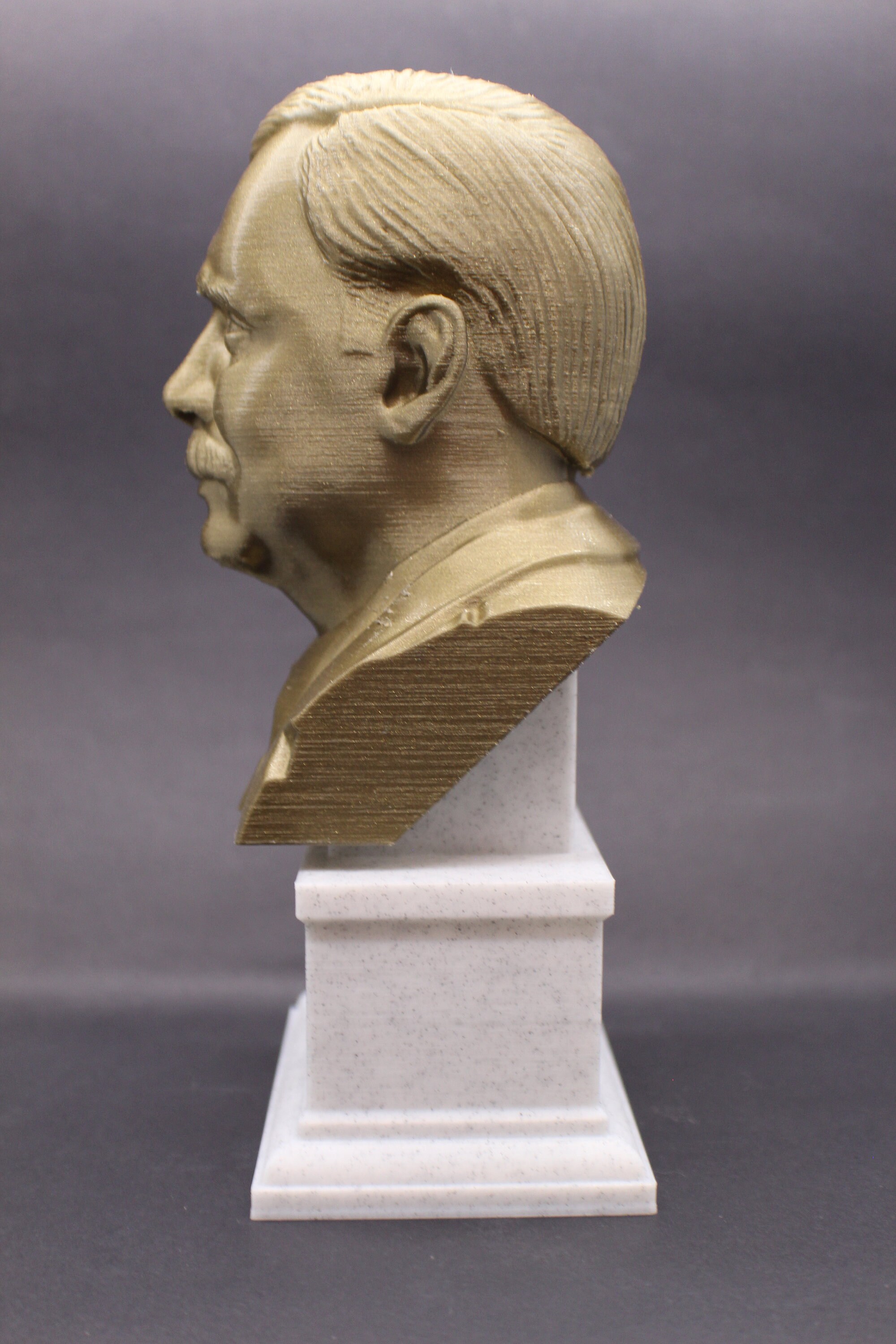 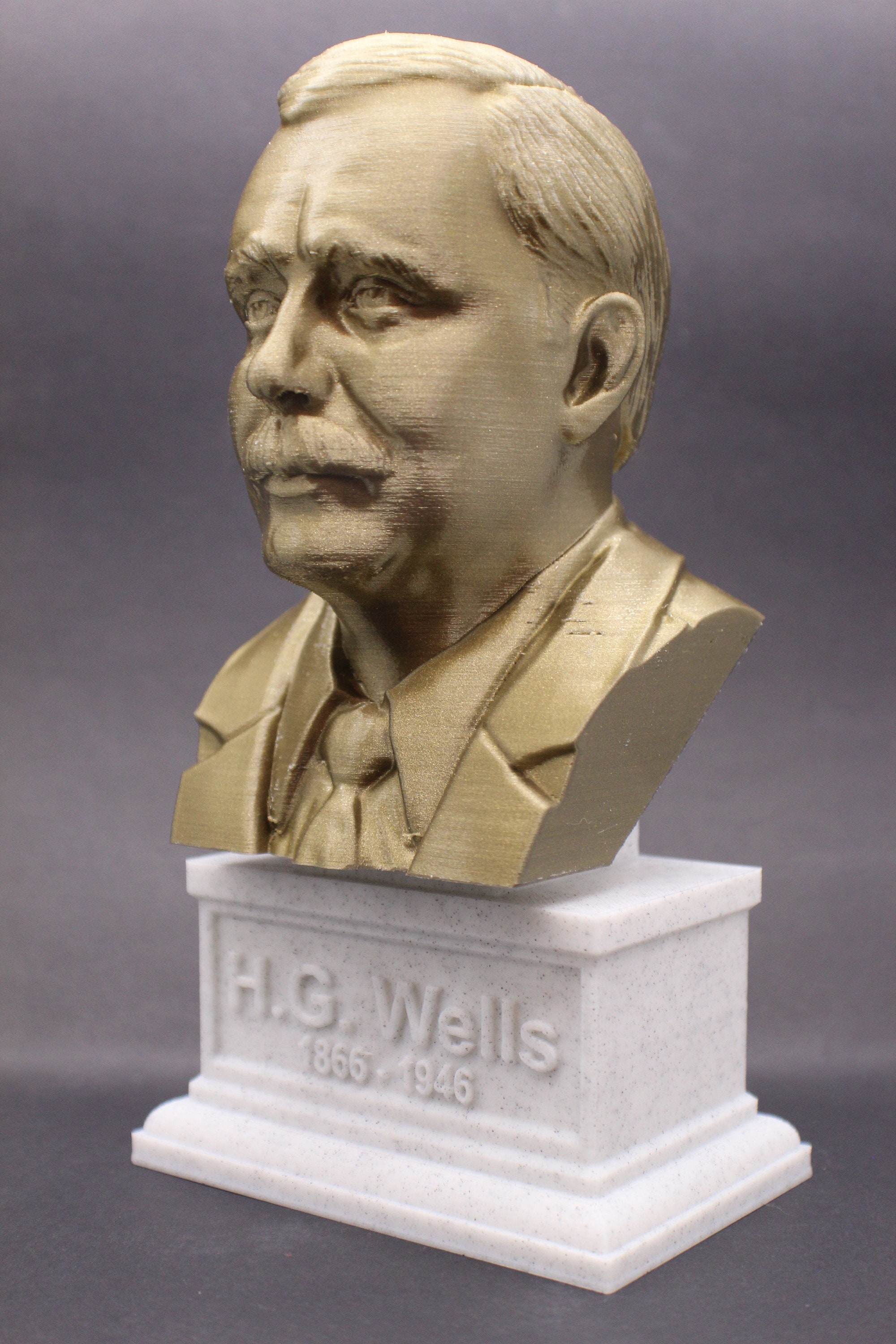 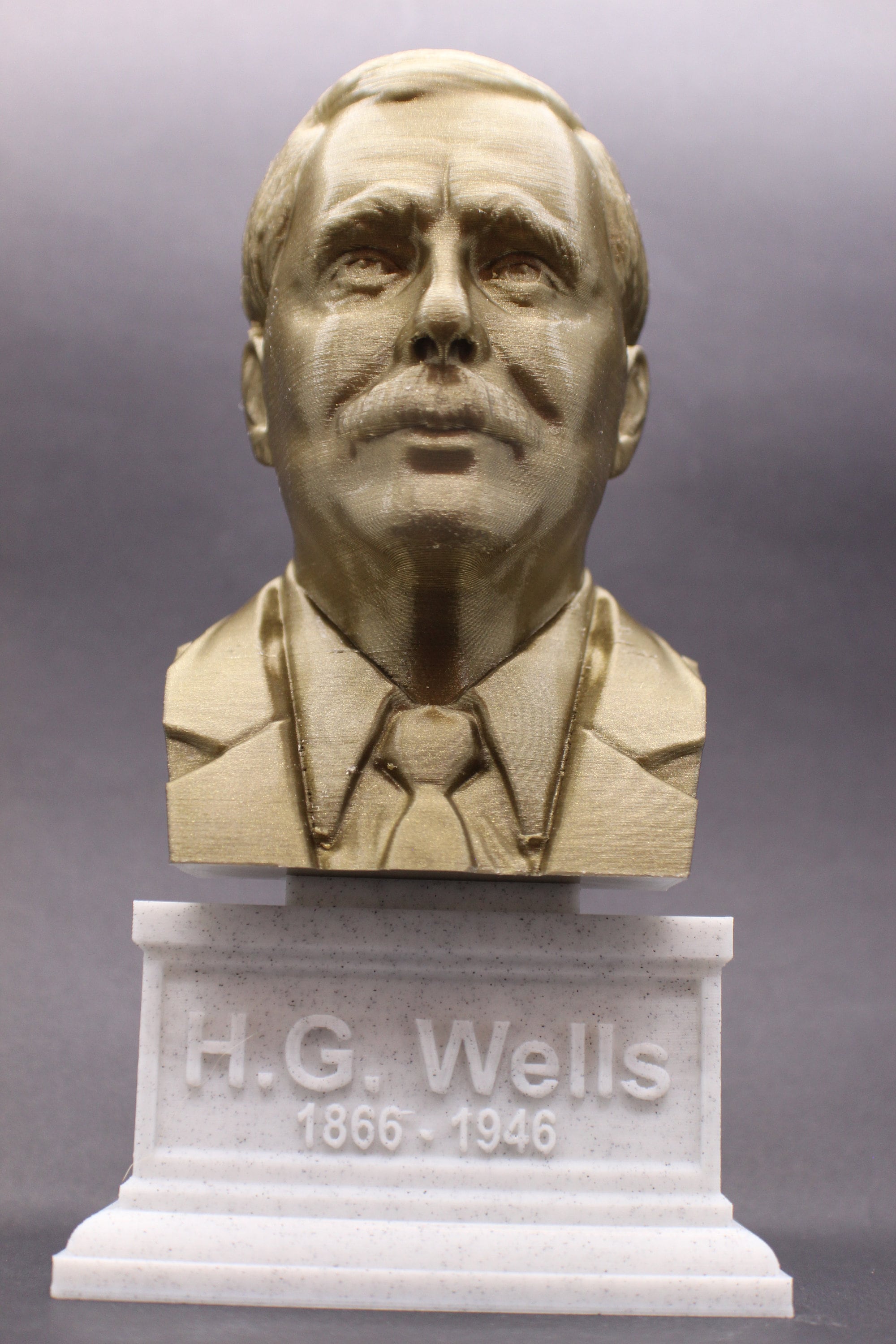 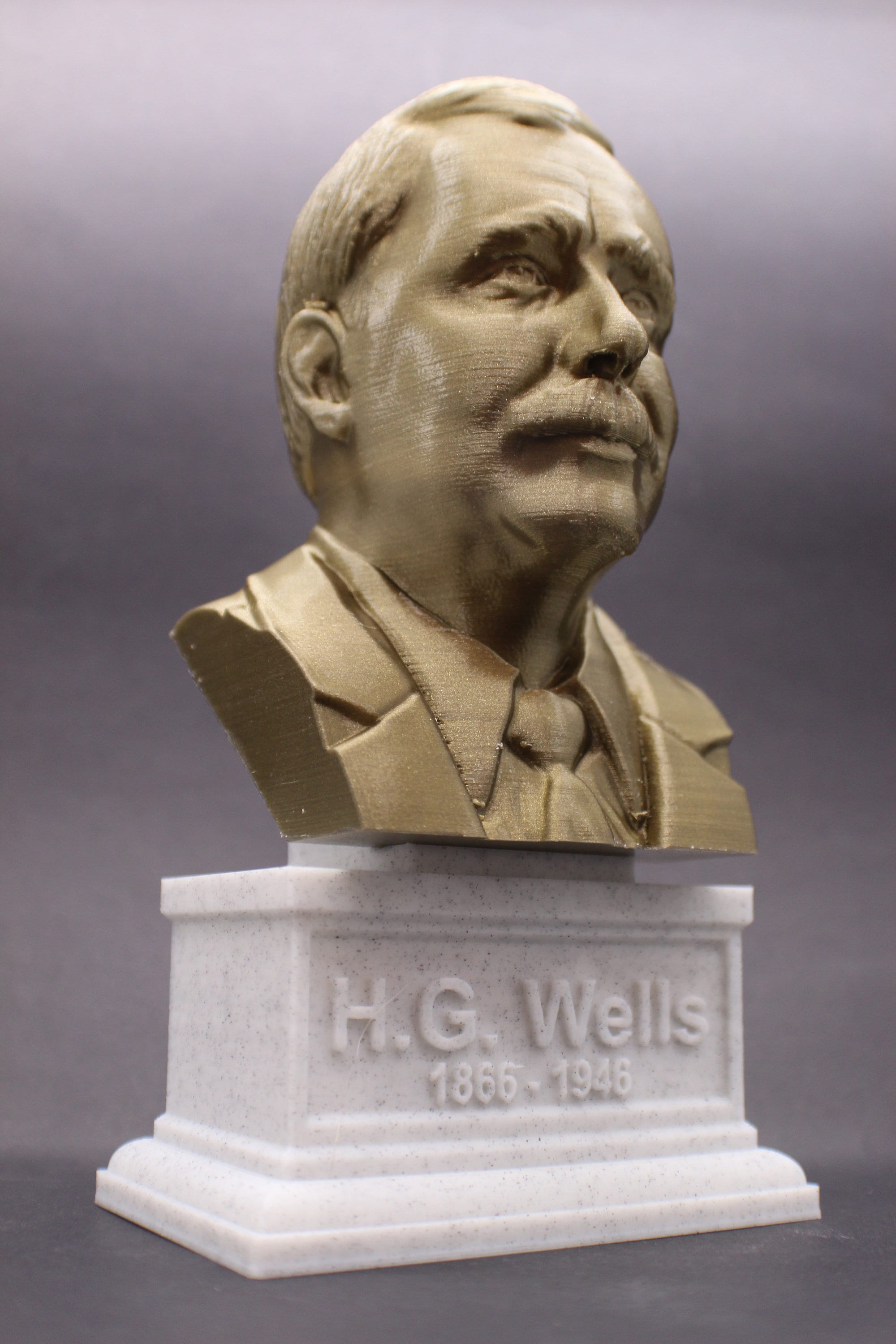 This is a 3D printed bust of H.G. Wells, English Writer. This one is printed in a marble and bronze PLA, giving it a realistic stone look and a surprise whenever someone picks it up to discover it's actual weight. It is more durable than alabaster or plaster, and is washable with lukewarm soapy water for easy spring cleaning. It comes on a custom plinth that has his lifetime on the front, and the quote:

"Adapt or perish, now as ever, is nature's inexorable imperative."

Herbert George Wells (21 September 1866 – 13 August 1946) was an English writer. He was prolific in many genres, writing dozens of novels, short stories, and works of social commentary, history, satire, biography, and autobiography, and even including two books on recreational war games. He is now best remembered for his science fiction novels and is often called the "father of science fiction", along with Jules Verne and the publisher Hugo Gernsback.

During his own lifetime, however, he was most prominent as a forward-looking, even prophetic social critic who devoted his literary talents to the development of a progressive vision on a global scale. A futurist, he wrote a number of utopian works and foresaw the advent of aircraft, tanks, space travel, nuclear weapons, satellite television and something resembling the World Wide Web. His science fiction imagined time travel, alien invasion, invisibility, and biological engineering. Brian Aldiss referred to Wells as the "Shakespeare of science fiction". Wells rendered his works convincing by instilling commonplace detail alongside a single extraordinary assumption – dubbed “Wells’s law” – leading Joseph Conrad to hail him in 1898 as "O Realist of the Fantastic!". His most notable science fiction works include The Time Machine (1895), The Island of Doctor Moreau (1896), The Invisible Man (1897), The War of the Worlds (1898) and the military science fiction The War in the Air (1907). Wells was nominated for the Nobel Prize in Literature four times.

Wells's earliest specialized training was in biology, and his thinking on ethical matters took place in a specifically and fundamentally Darwinian context. He was also from an early date an outspoken socialist, often (but not always, as at the beginning of the First World War) sympathizing with pacifist views. His later works became increasingly political and didactic, and he wrote little science fiction, while he sometimes indicated on official documents that his profession was that of journalist. Novels such as Kipps and The History of Mr Polly, which describe lower-middle-class life, led to the suggestion that he was a worthy successor to Charles Dickens, but Wells described a range of social strata and even attempted, in Tono-Bungay (1909), a diagnosis of English society as a whole. Wells was a diabetic and co-founded the charity The Diabetic Association (known today as Diabetes UK) in 1934.