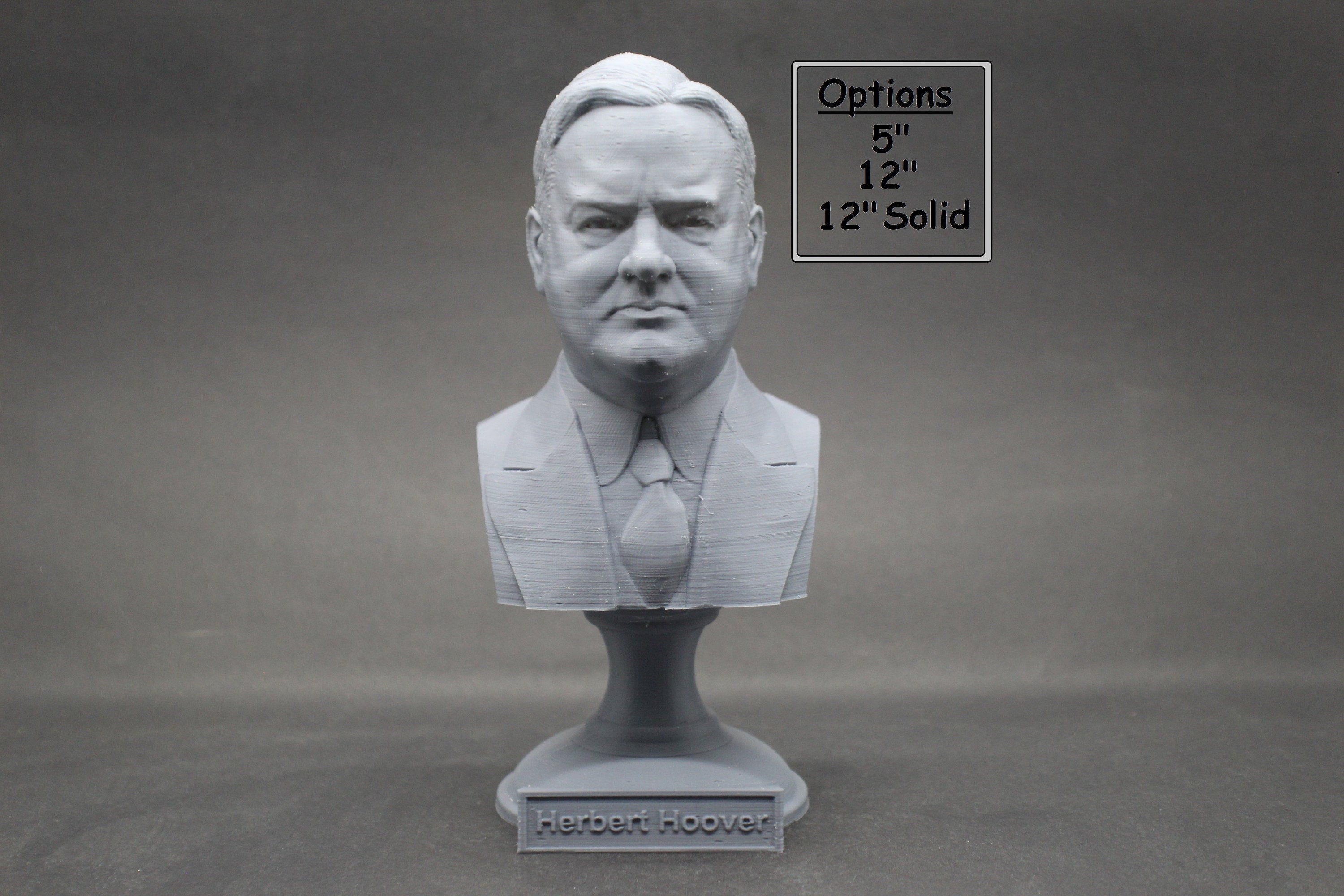 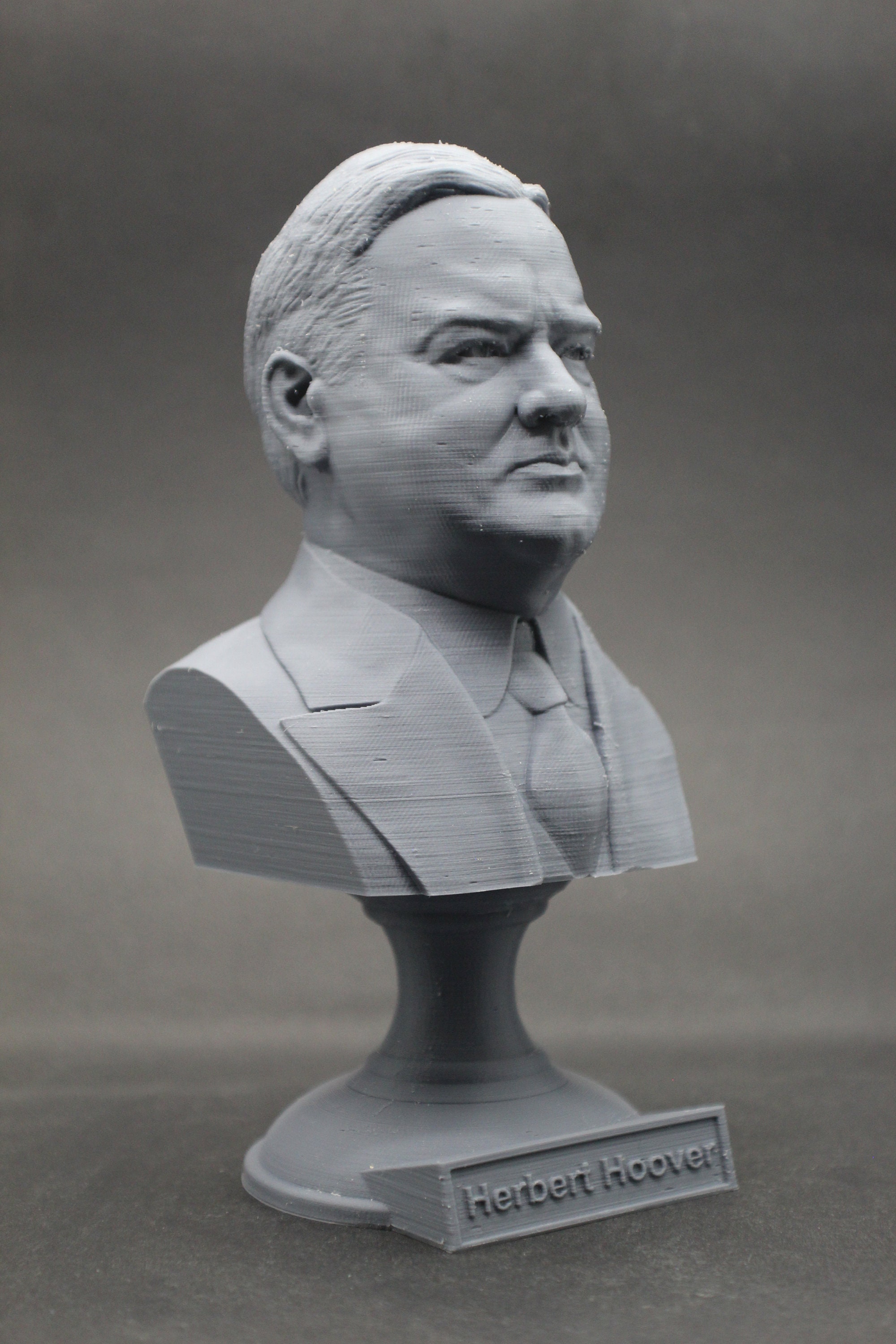 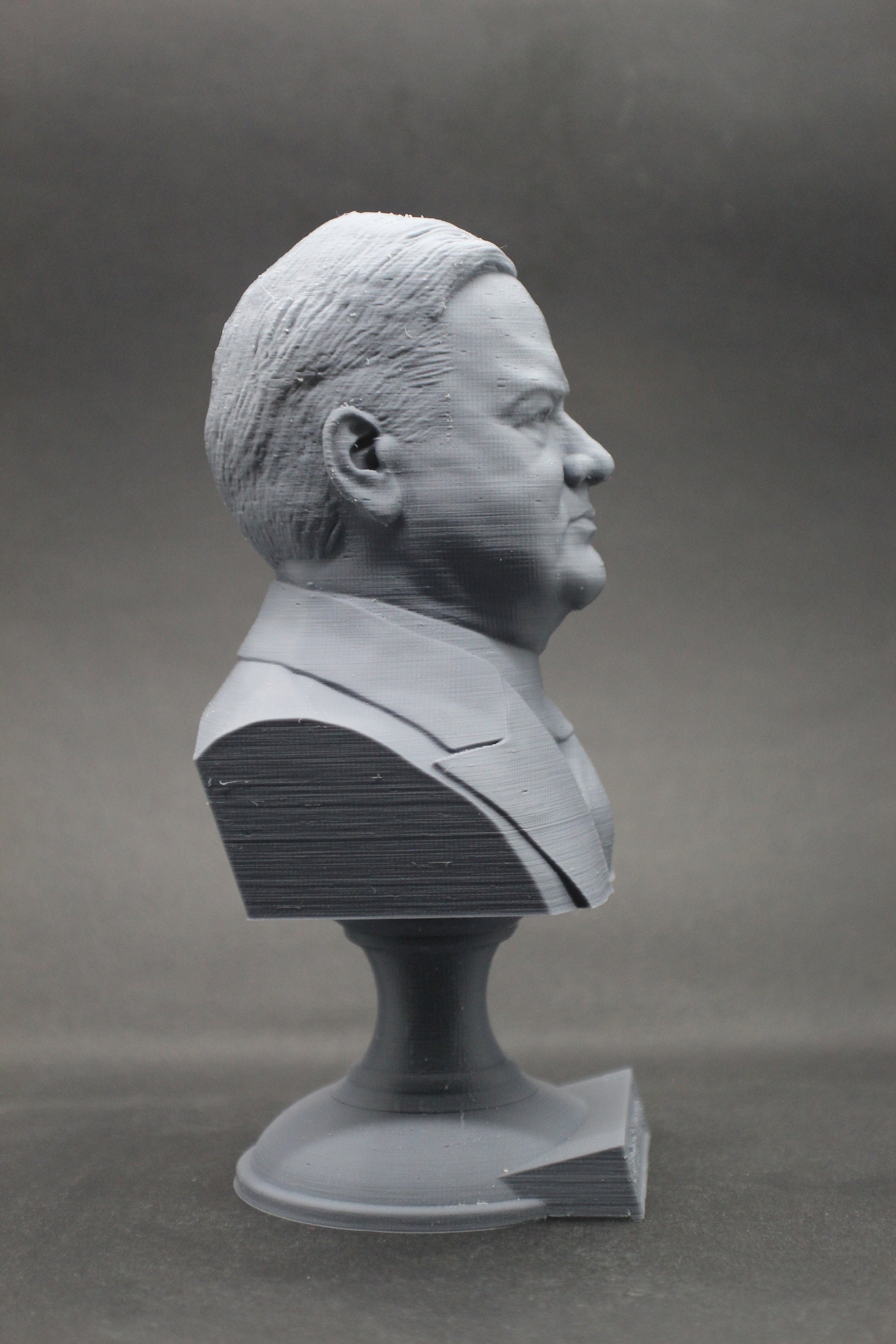 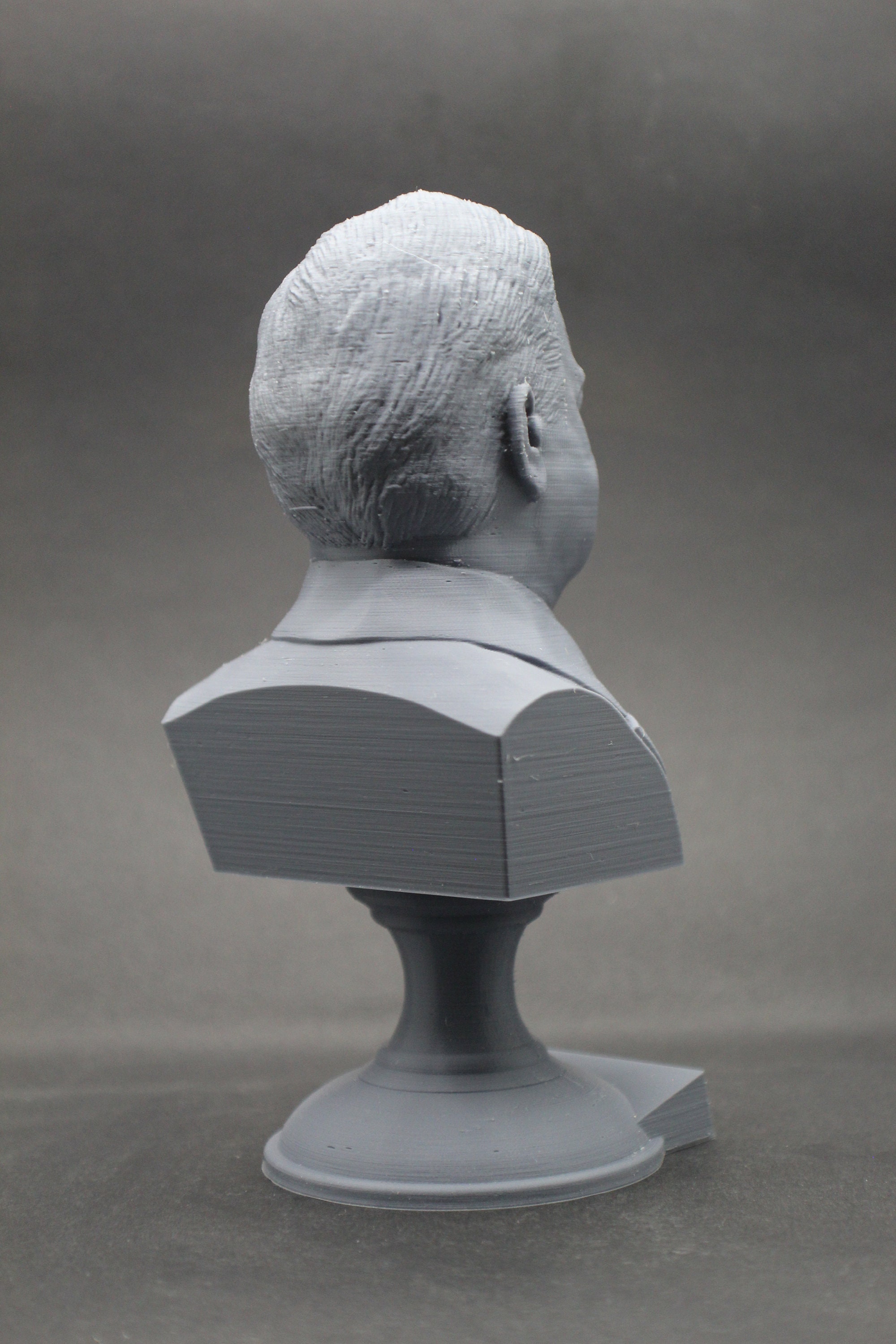 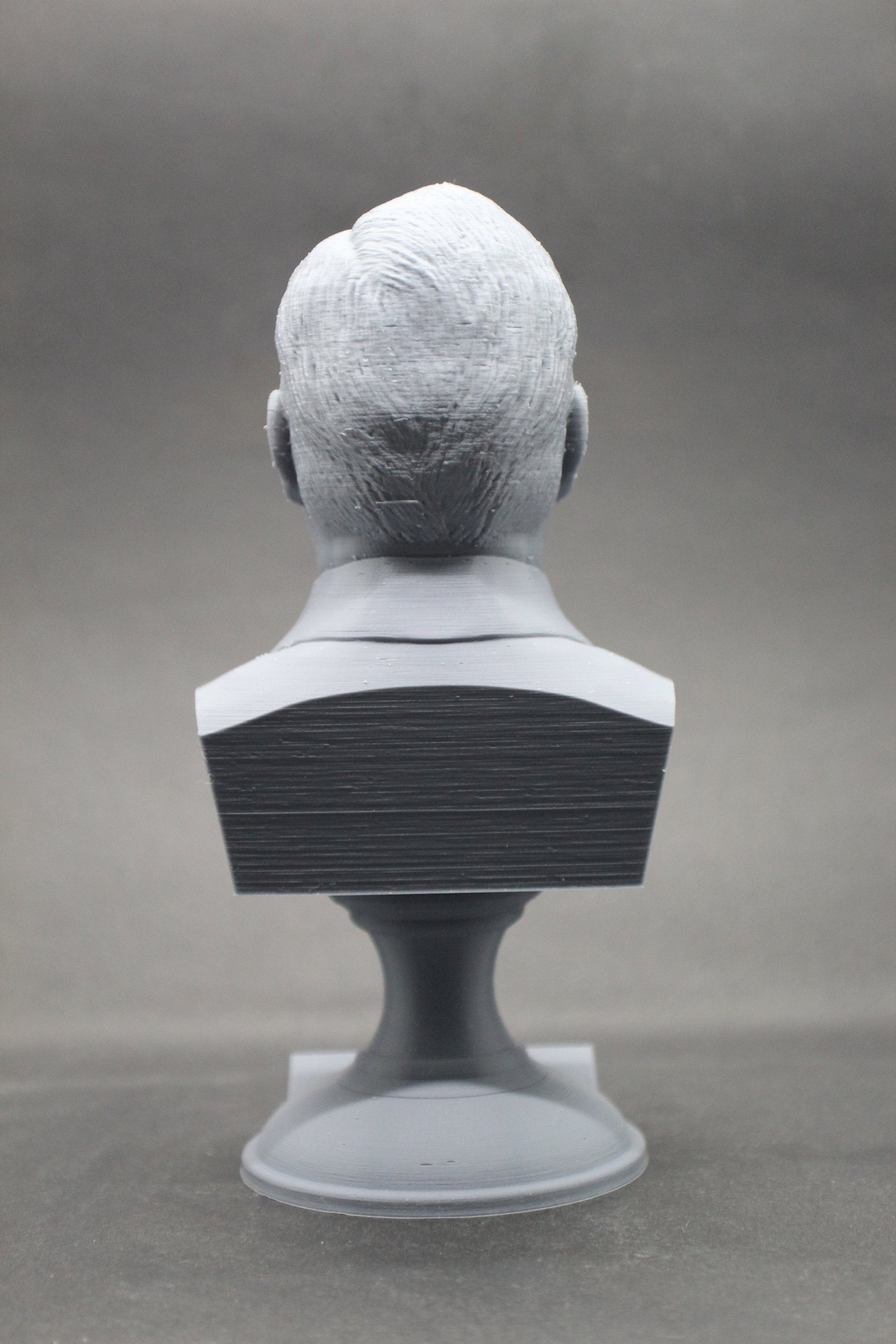 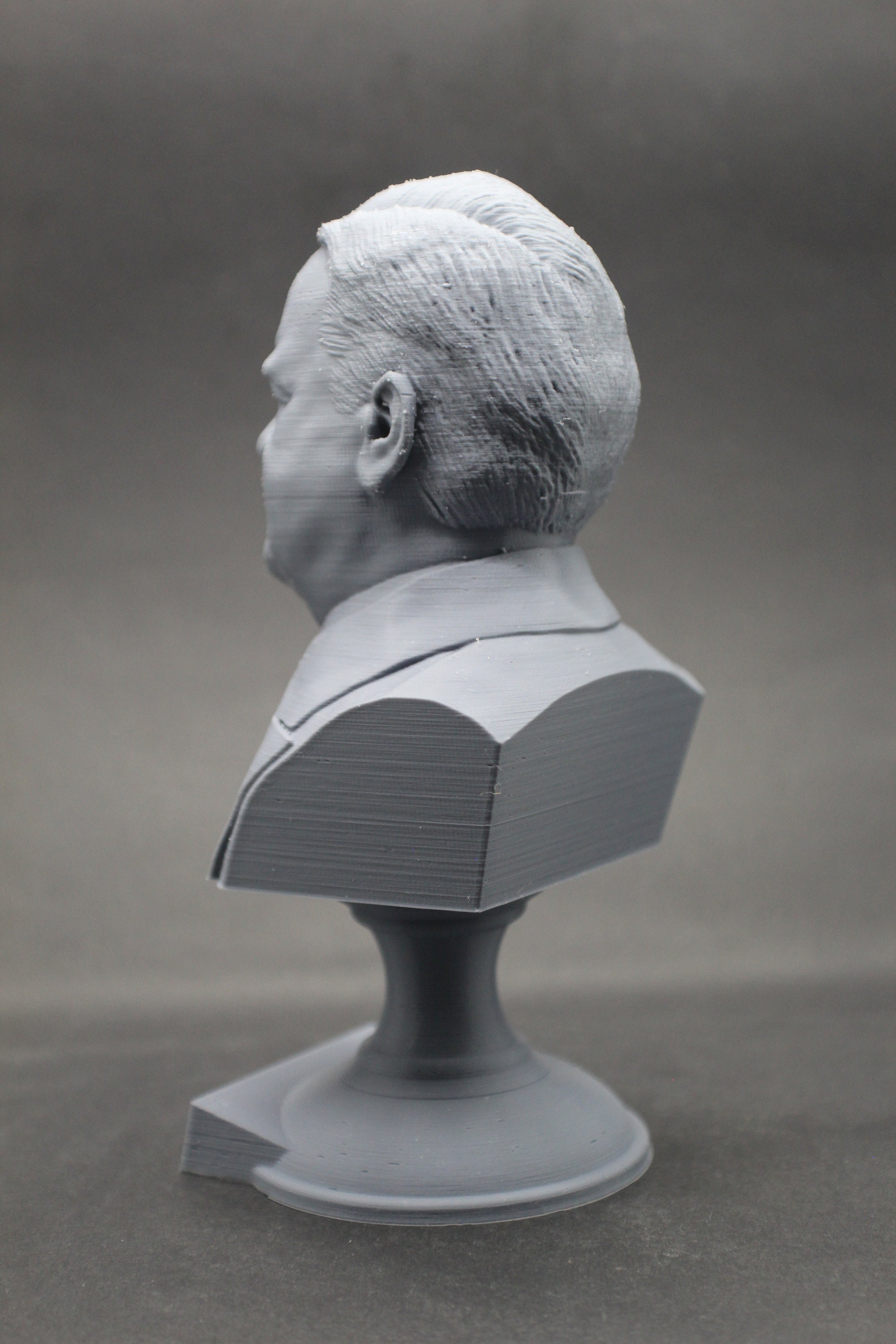 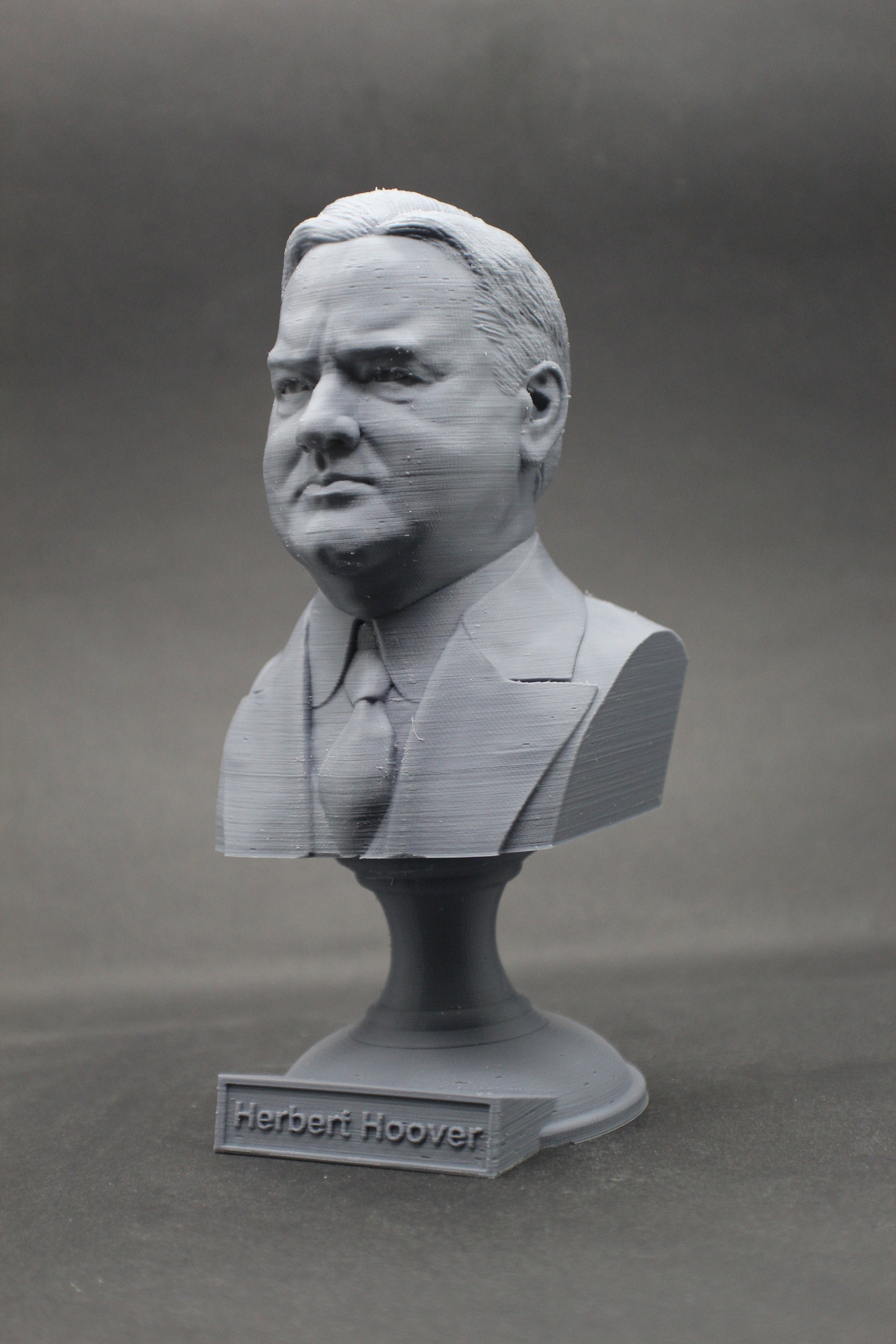 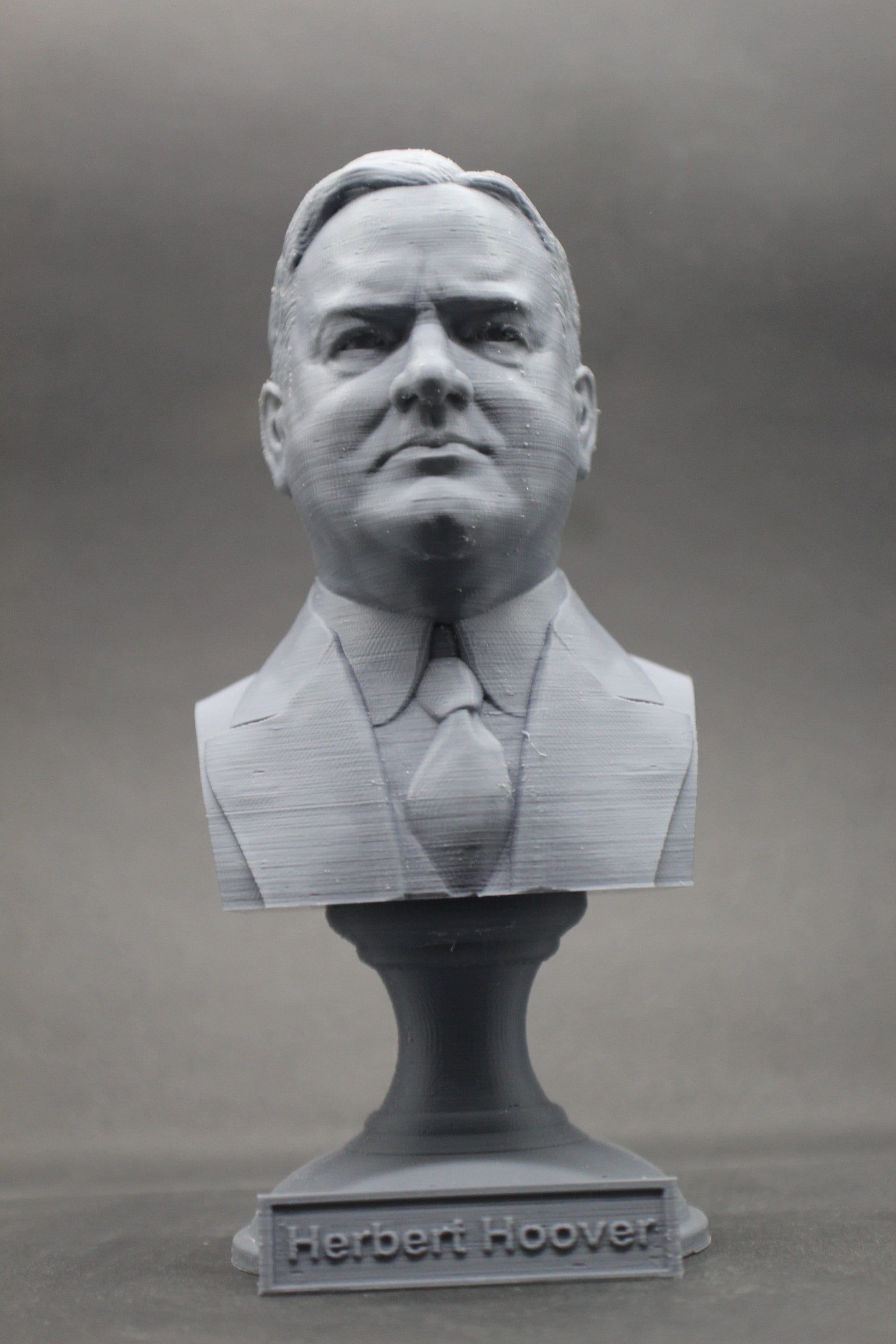 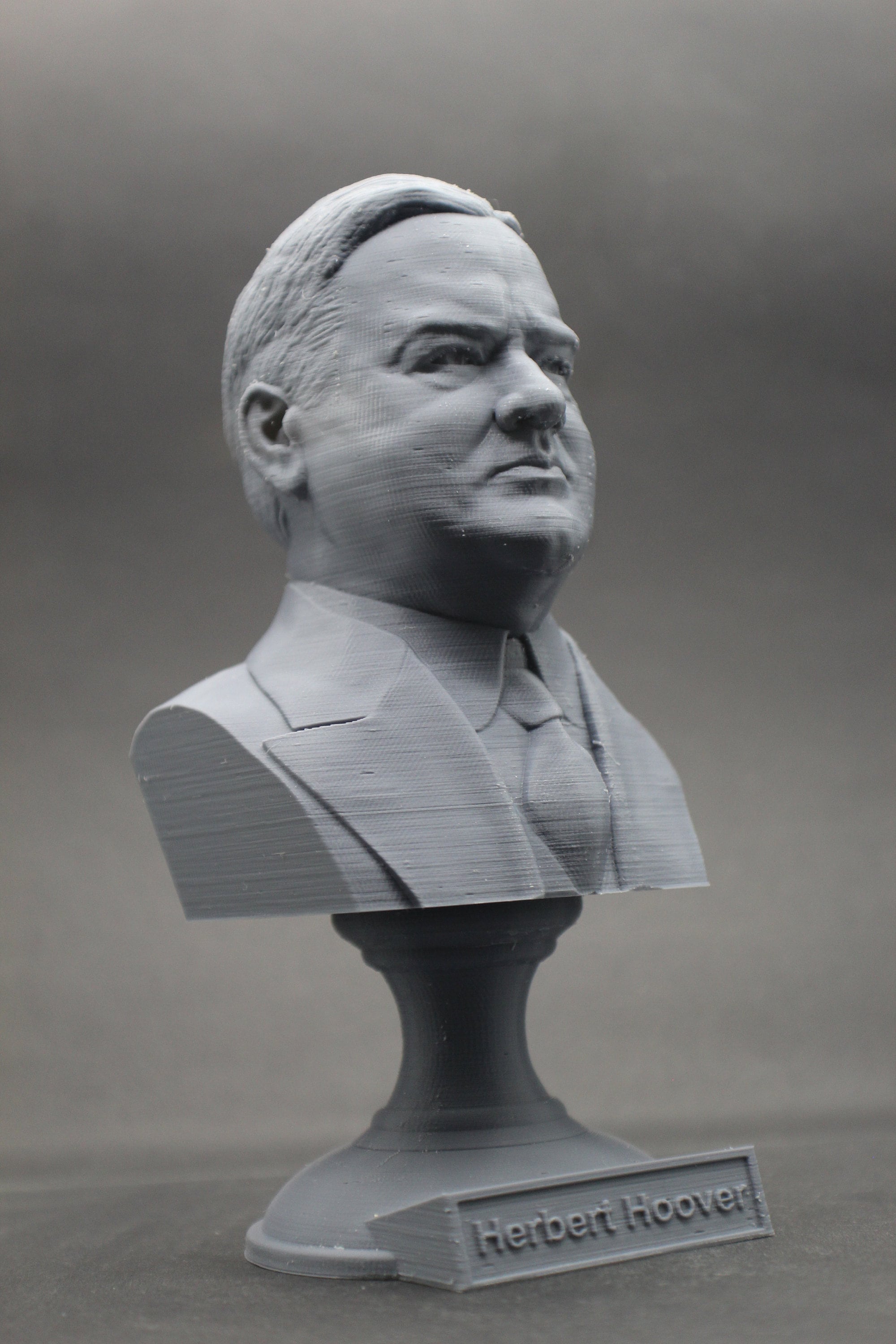 This 3D printed bust of Herbert Hoover, the thirty-first United States President. This one is printed in a gray PLA, giving it a detailed look and a surprise whenever someone picks it up to discover it's actual weight. It is more durable than alabaster or plaster, and is washable with lukewarm soapy water for easy spring cleaning. It comes on a custom plinth that has his name on the front.

Herbert Clark Hoover (August 10, 1874 – October 20, 1964) was an American engineer, businessman, and politician who served as the 31st president of the United States from 1929 to 1933. A member of the Republican Party, he held office during the onset of the Great Depression. Prior to serving as president, Hoover led the Commission for Relief in Belgium, served as the director of the U.S. Food Administration, and served as the 3rd U.S. Secretary of Commerce.

Born to a Quaker family in West Branch, Iowa, Hoover took a position with a London-based mining company after graduating from Stanford University in 1895. After the outbreak of World War I, he became the head of the Commission for Relief in Belgium, an international relief organization that provided food to occupied Belgium. When the U.S. entered the war, President Woodrow Wilson appointed Hoover to lead the Food Administration, and Hoover became known as the country's "food czar". After the war, Hoover led the American Relief Administration, which provided food to the inhabitants of Central Europe and Eastern Europe. Hoover's war-time service made him a favorite of many progressives, and he unsuccessfully sought the Republican nomination in the 1920 presidential election.

After the 1920 election, newly-elected Republican President Warren G. Harding appointed Hoover as Secretary of Commerce; Hoover continued to serve under President Calvin Coolidge after Harding died in 1923. Hoover was an unusually active and visible cabinet member, becoming known as "Secretary of Commerce and Under-Secretary of all other departments". He was influential in the development of radio and air travel and led the federal response to the Great Mississippi Flood of 1927. Hoover won the Republican nomination in the 1928 presidential election, and decisively defeated the Democratic candidate, Al Smith. The stock market crashed shortly after Hoover took office, and the Great Depression became the central issue of his presidency. Hoover pursued a variety of policies in an attempt to lift the economy, but opposed directly involving the federal government in relief efforts.

In the midst of an ongoing economic crisis, Hoover was decisively defeated by Democratic nominee Franklin D. Roosevelt in the 1932 presidential election. Hoover enjoyed one of the longest retirements of any former president, and he authored numerous works. After leaving office, Hoover became increasingly conservative, and he strongly criticized Roosevelt's foreign policy and New Deal domestic agenda. In the 1940s and 1950s, Hoover's public reputation was rehabilitated as he served for Presidents Harry S. Truman and Dwight D. Eisenhower in various assignments, including as chairman of the Hoover Commission. Nevertheless, Hoover is generally not ranked highly in historical rankings of presidents of the United States.