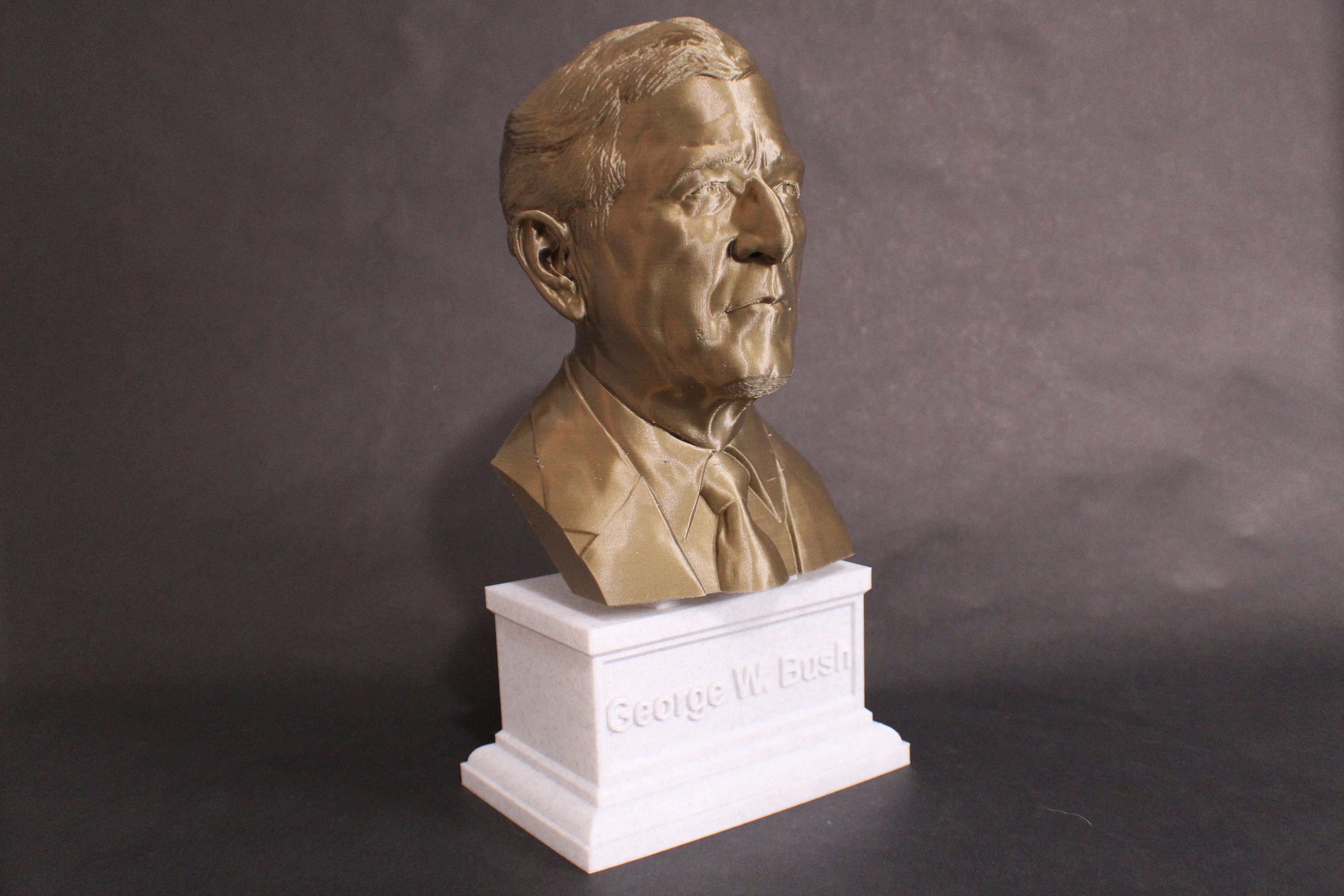 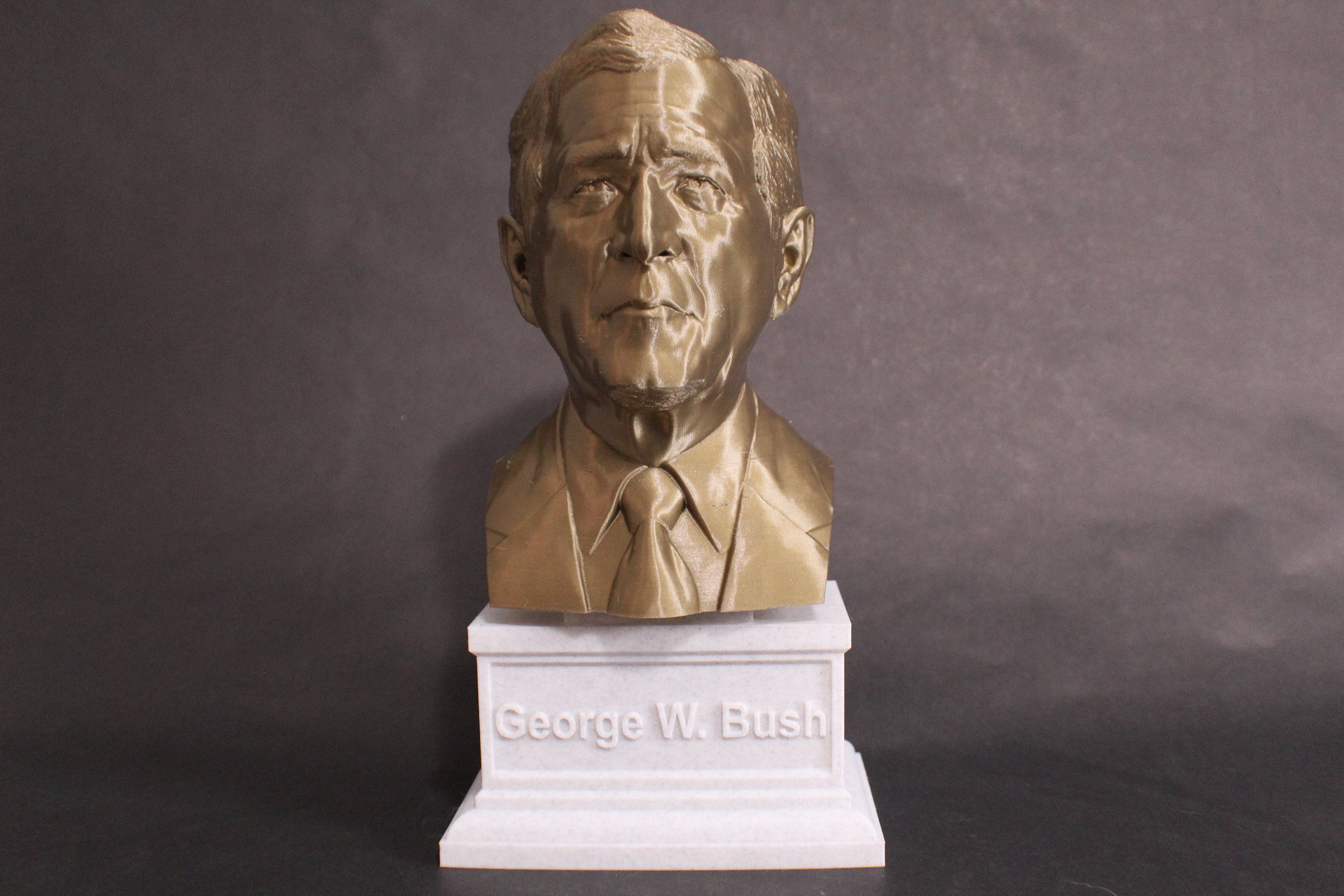 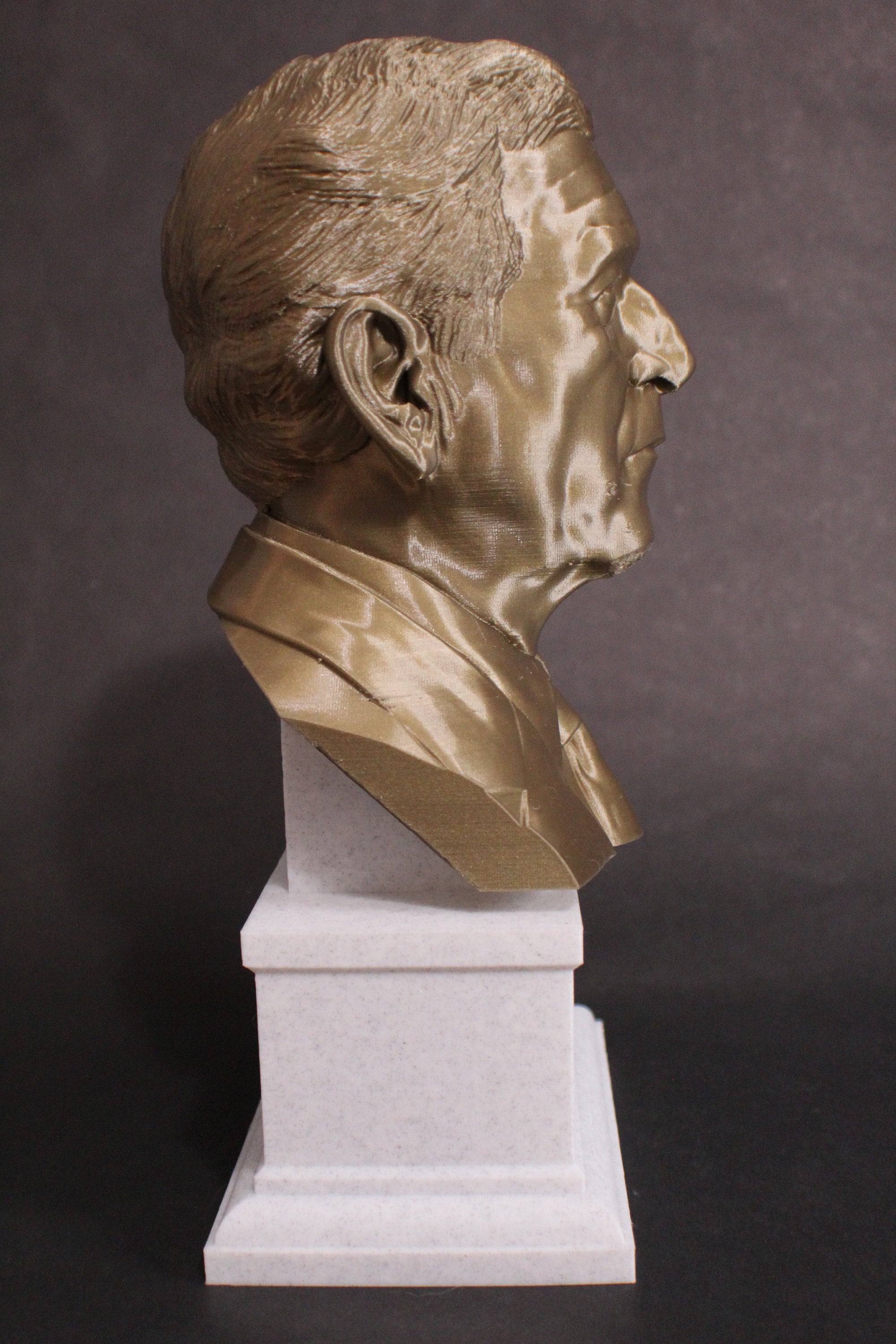 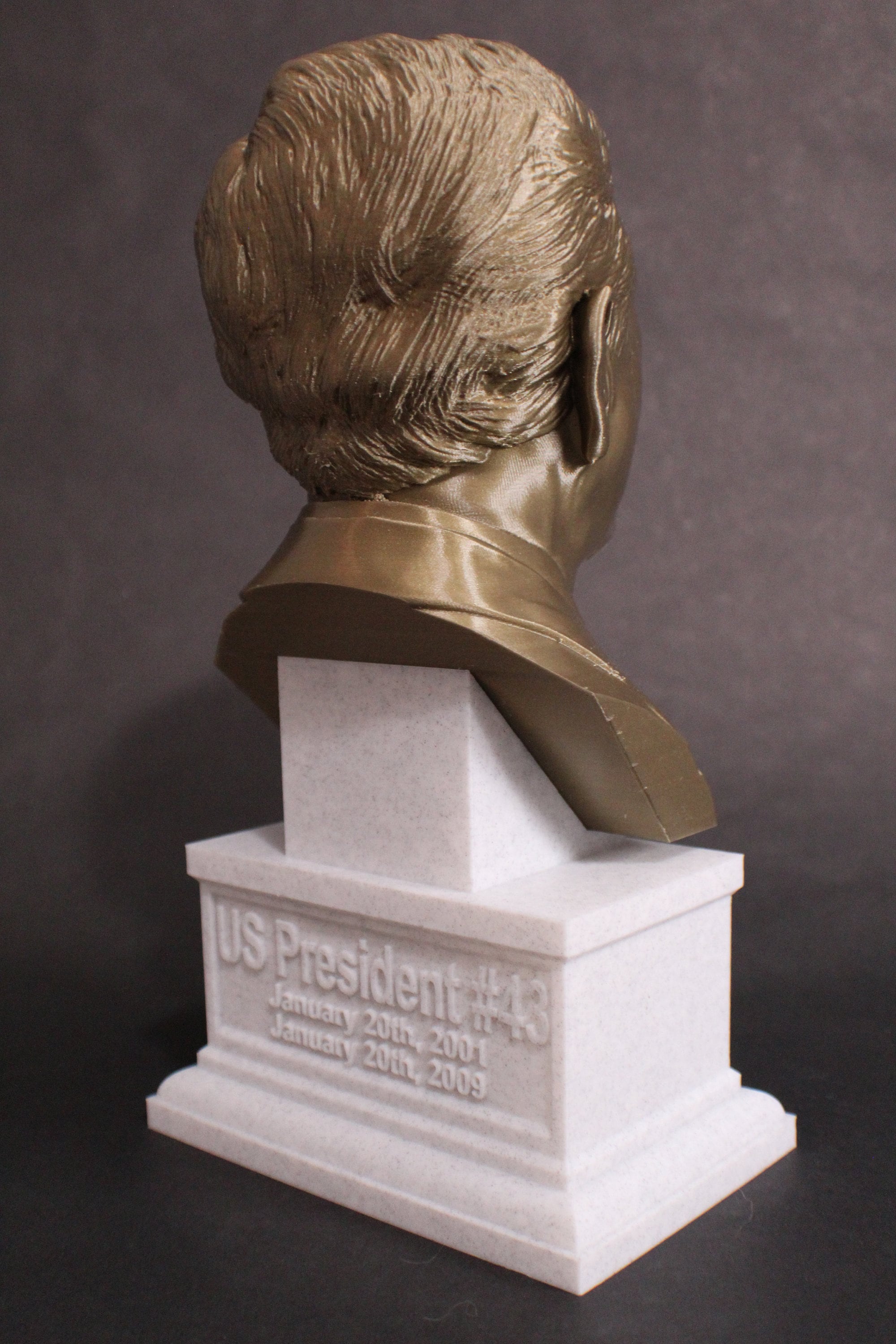 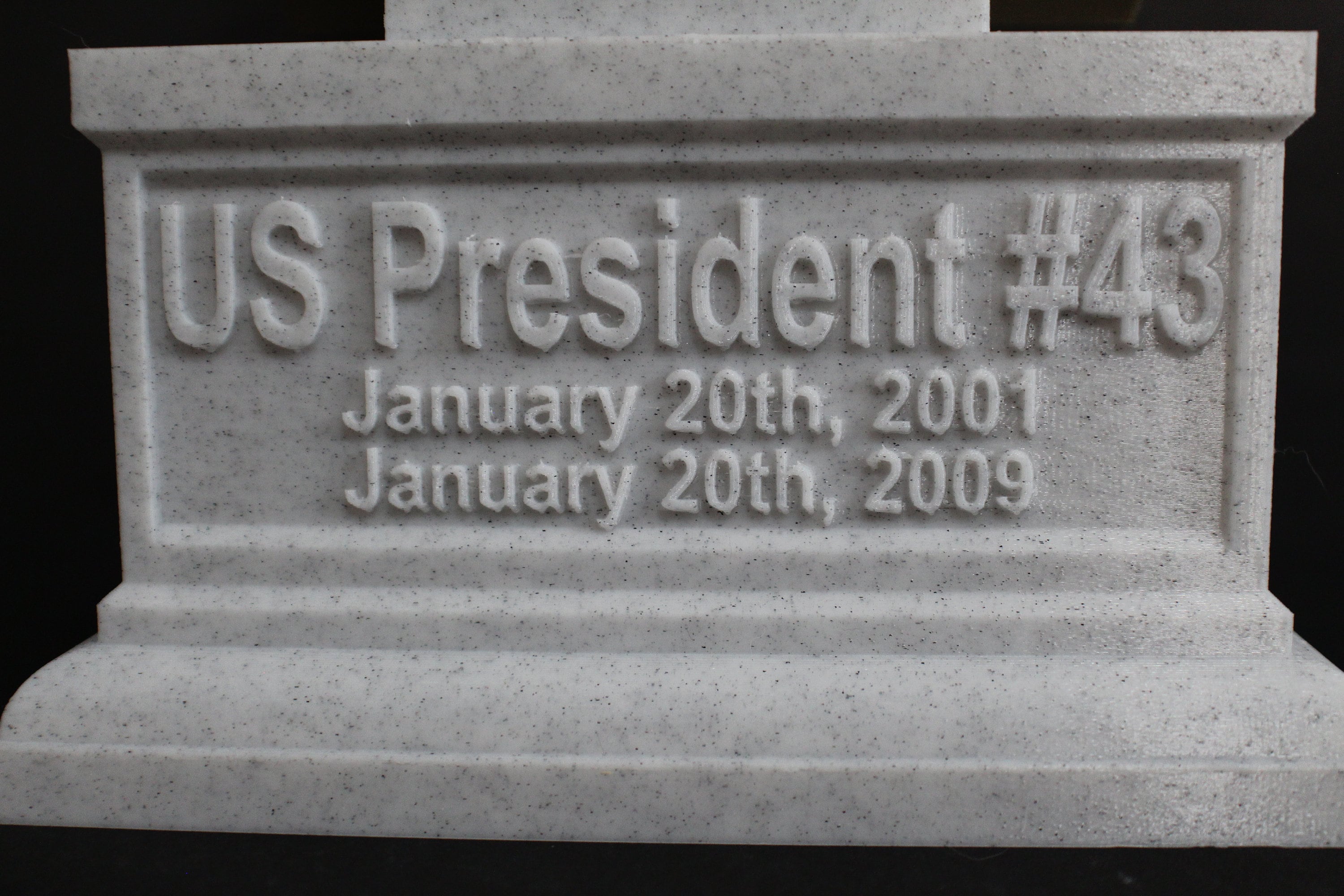 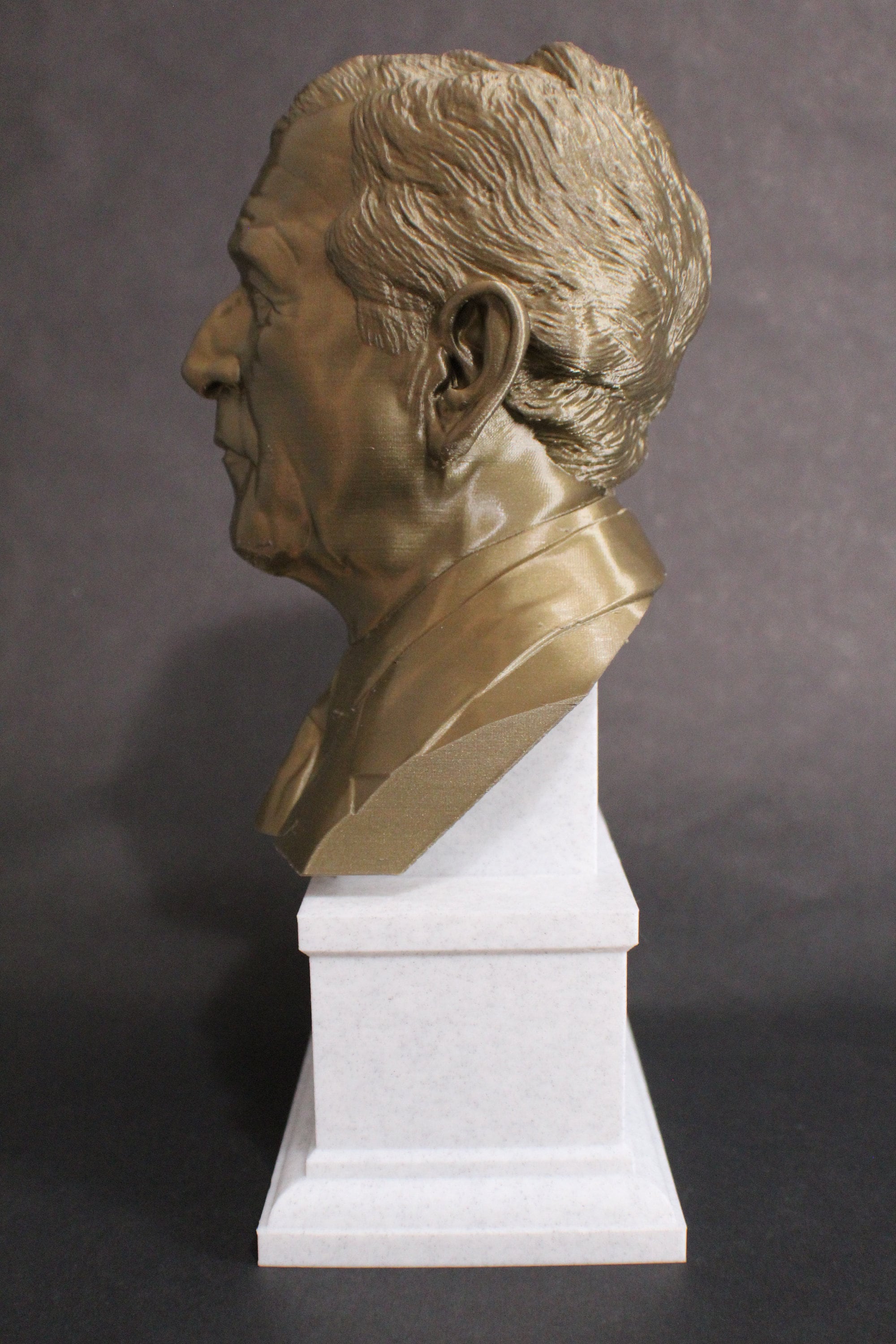 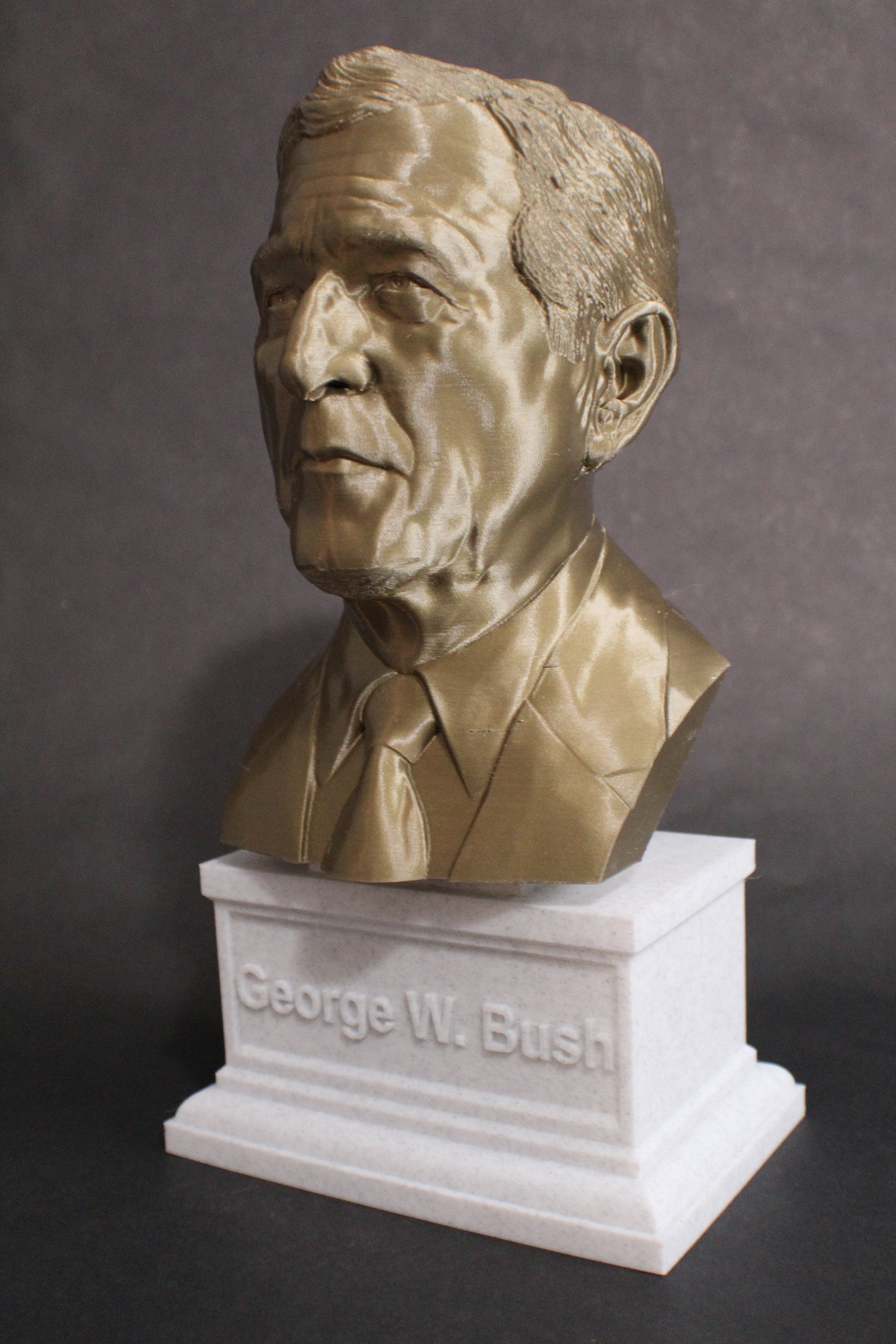 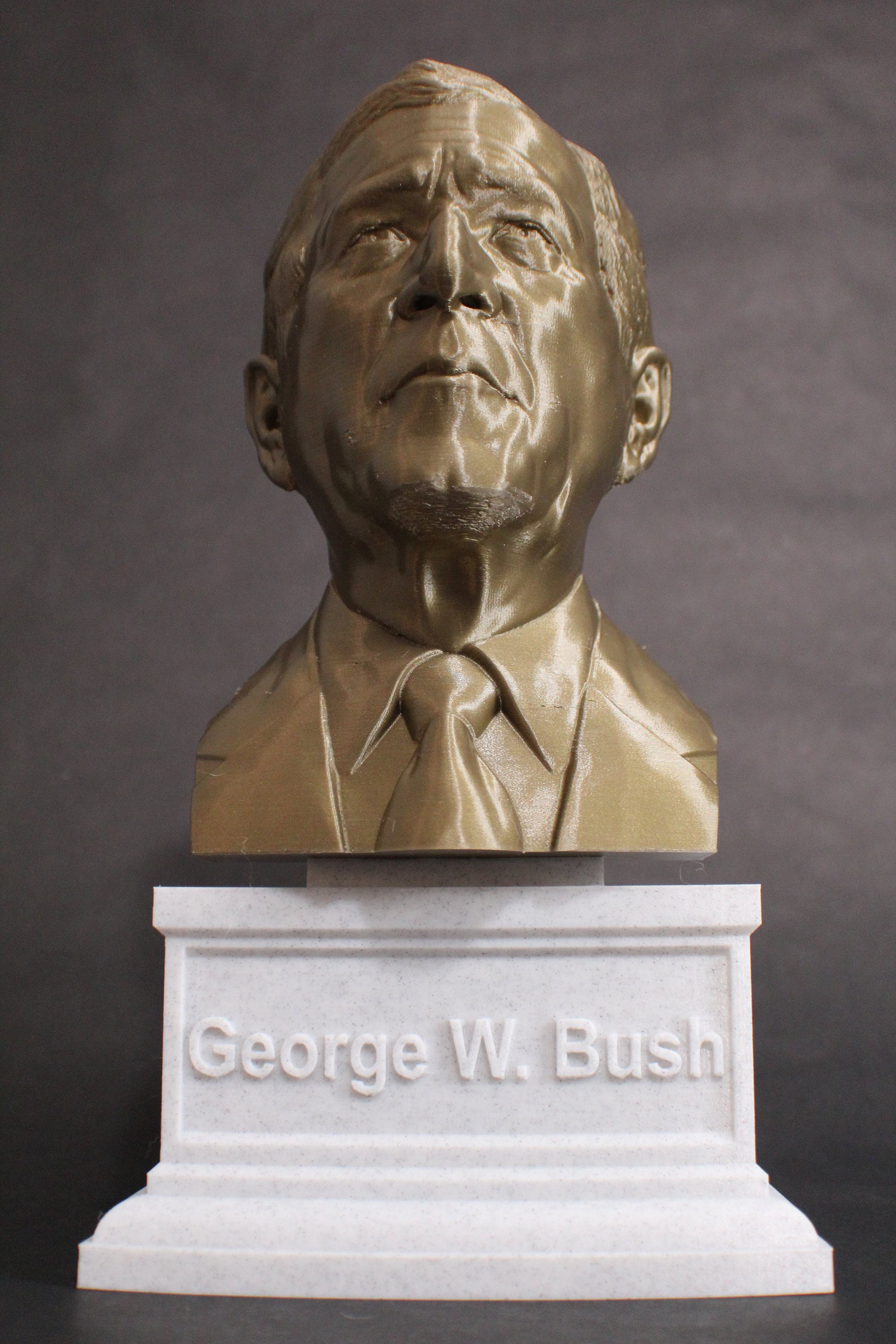 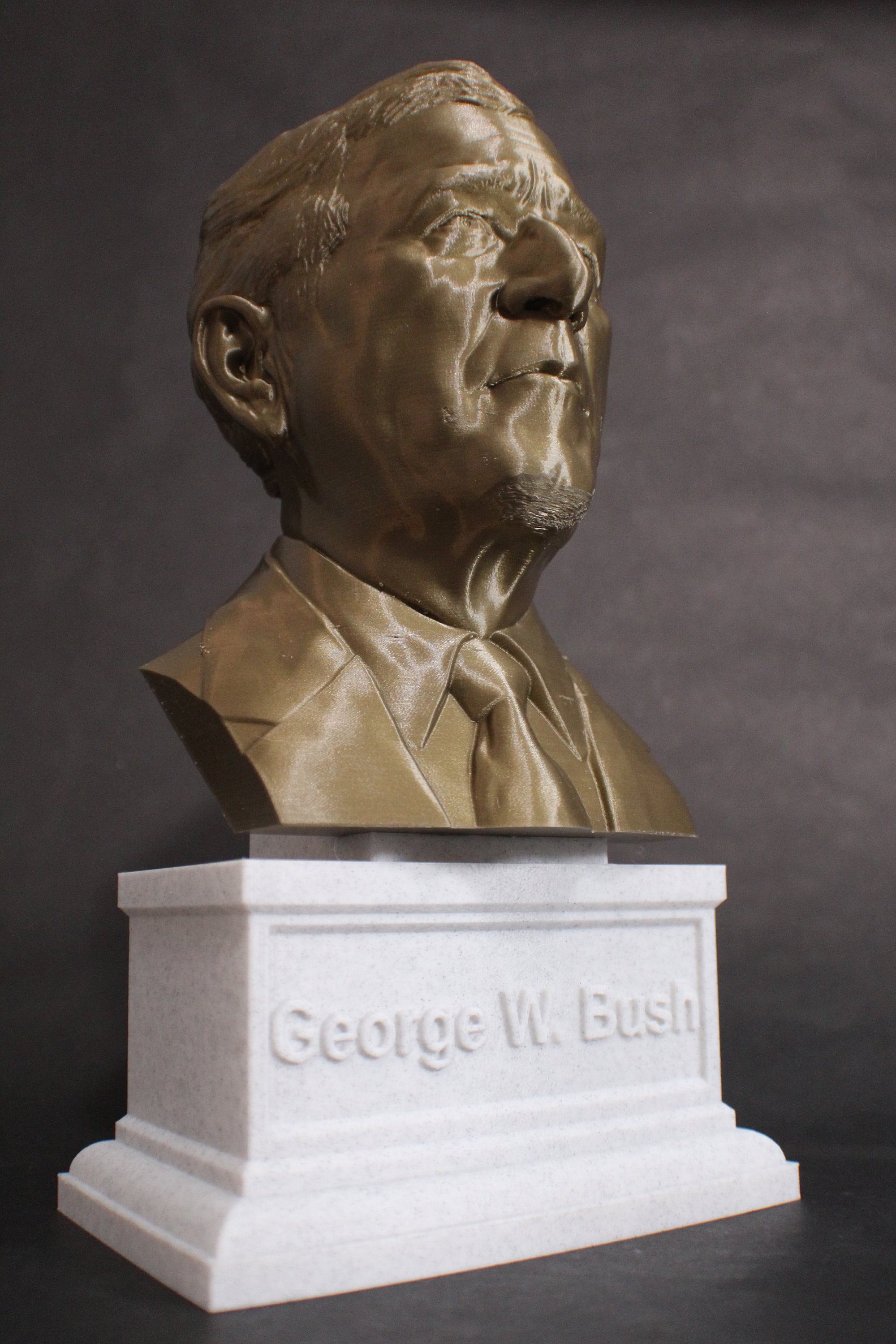 This is a 3D printed bust of George W. Bush, the forty-third United States President. This one is printed in a bronze and marble PLA, giving it a realistic metal/stone look and a surprise whenever someone picks it up to discover it's actual weight. It is more durable than alabaster or plaster, and is washable with lukewarm soapy water for easy spring cleaning. It comes on a custom plinth that has his lifetime on the front, and his dates in office as president on the back.

Bush is the eldest son of Barbara and George H. W. Bush, the 41st president of the United States, and is the second president to so follow in his father's footsteps, the first being John Quincy Adams. After graduating from Yale University in 1968 and Harvard Business School in 1975, he worked in the oil industry. Bush married Laura Welch in 1977 and unsuccessfully ran for the U.S. House of Representatives shortly thereafter. He later co-owned the Texas Rangers baseball team before defeating Ann Richards in the 1994 Texas gubernatorial election. Bush was elected President of the United States in 2000 when he defeated Democratic incumbent Vice President Al Gore after a narrow and contested win that involved a stopped recount in Florida. He became the fourth person to be elected president while receiving fewer popular votes than his opponent.

In response to the September 11 terrorist attacks, Bush launched a "War on Terror" that initially included the war in Afghanistan in 2001 and the Iraq War in 2003. He signed into law broad tax cuts, the Patriot Act, the No Child Left Behind Act, the Partial-Birth Abortion Ban Act, Medicare prescription drug benefits for seniors, and funding for the AIDS relief program known as PEPFAR. In the 2004 presidential race, Bush defeated Democratic Senator John Kerry in a close election. After his re-election, Bush received criticism from across the political spectrum for his handling of the Iraq War, Hurricane Katrina, and other challenges. Amid this criticism, the Democratic Party regained control of Congress in the 2006 elections. In December 2007, the United States entered its longest post-World War II recession, often referred to as the "Great Recession", prompting the Bush administration to obtain congressional passage of multiple economic programs intended to preserve the country's financial system.

Bush was among the most popular, as well as unpopular, U.S. presidents in history; he received the highest recorded approval ratings in the wake of the 9/11 attacks, but one of the lowest such ratings during the 2008 financial crisis. Bush finished his term in office in 2009 and returned to Texas. In 2010, he published his memoir, Decision Points. His presidential library opened in 2013. His presidency has been rated below average in historians' polls, although his favorability ratings have improved since leaving office.