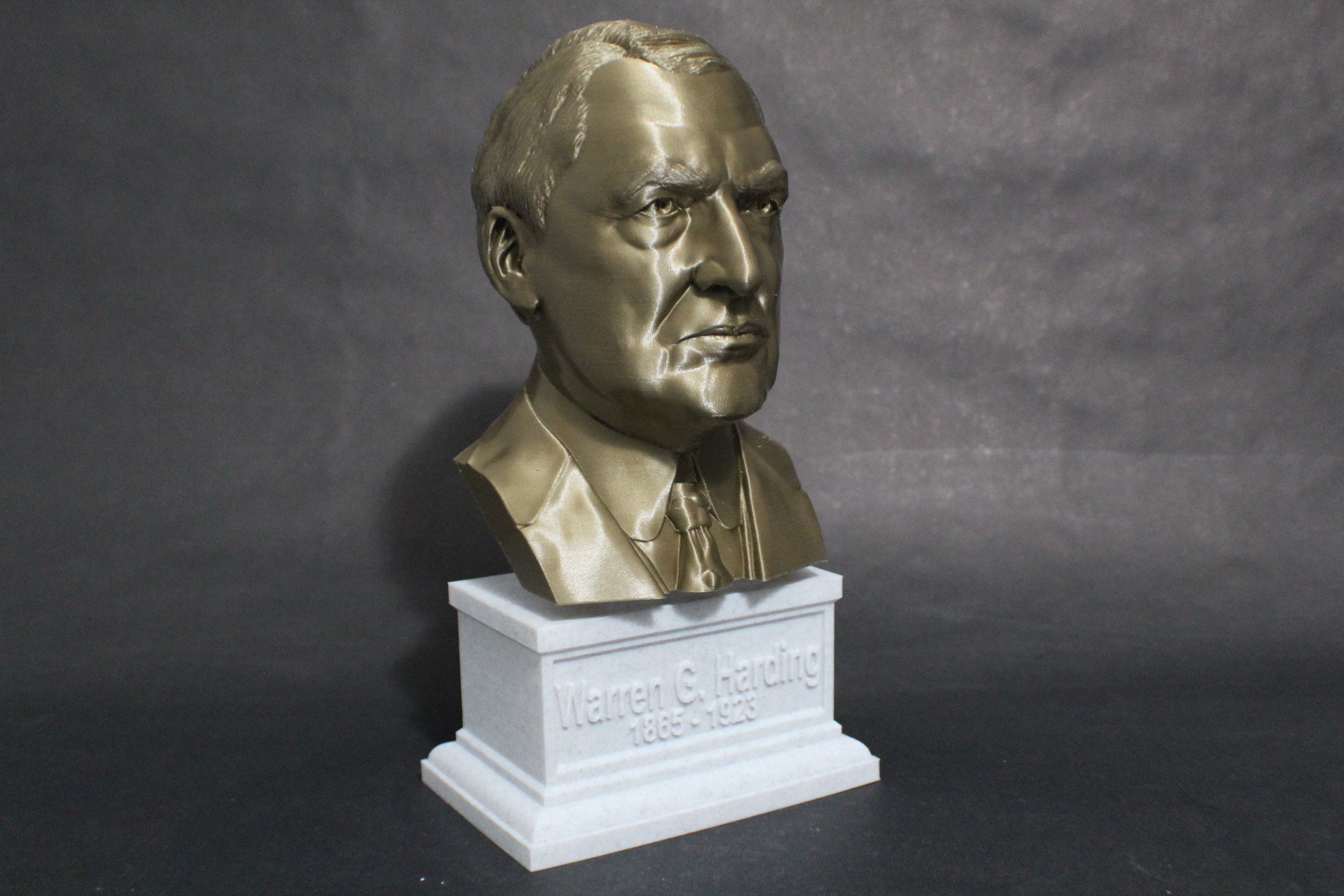 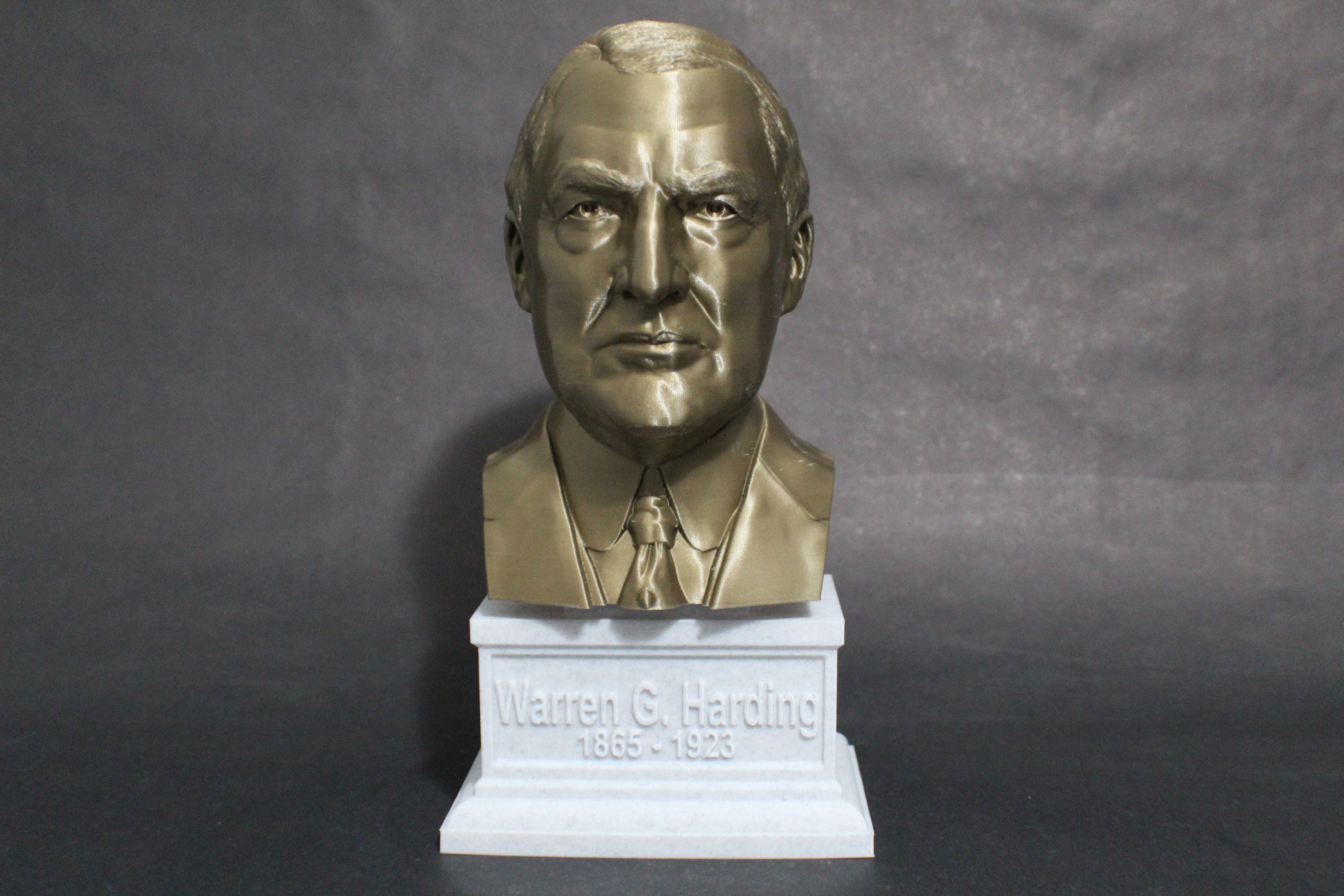 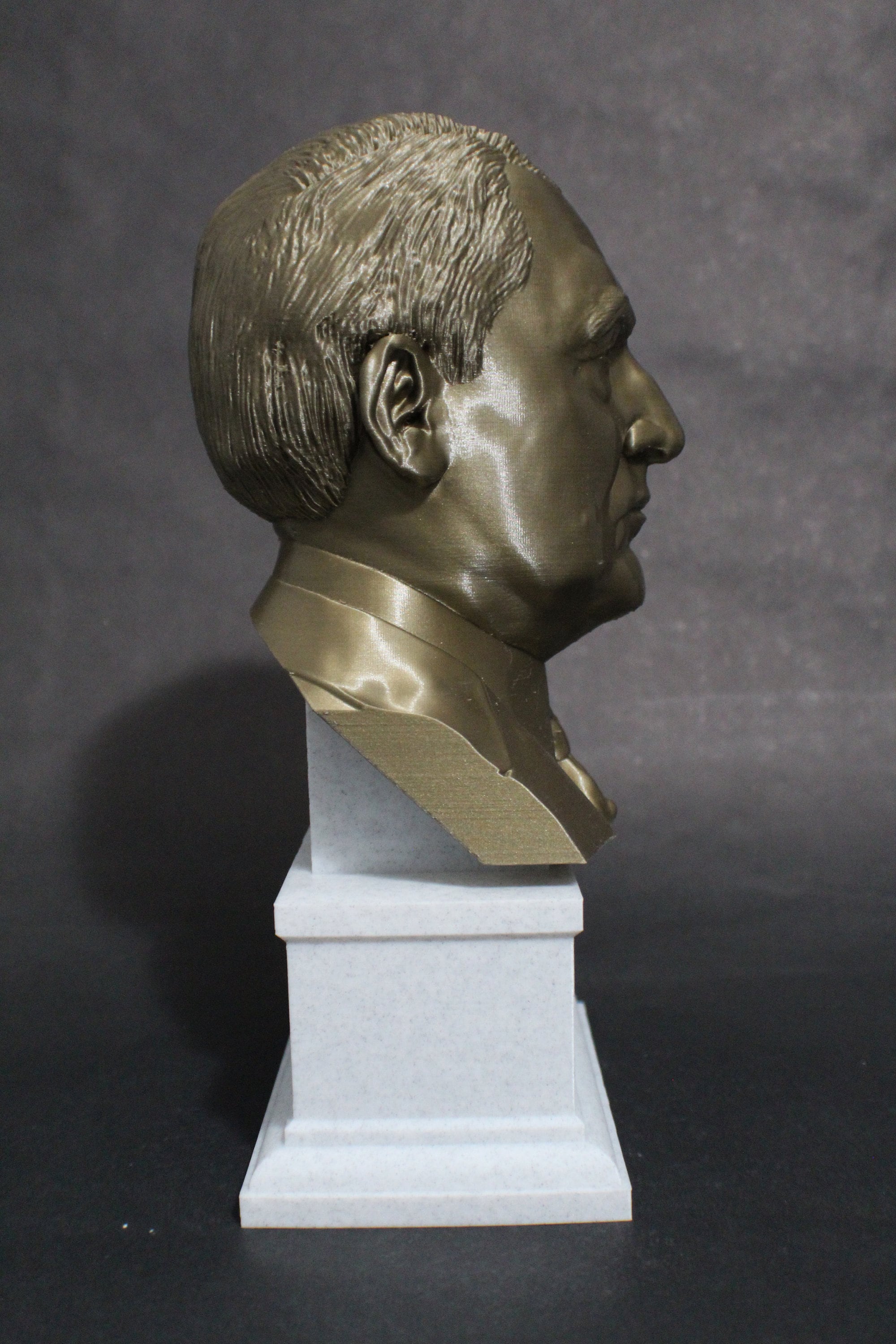 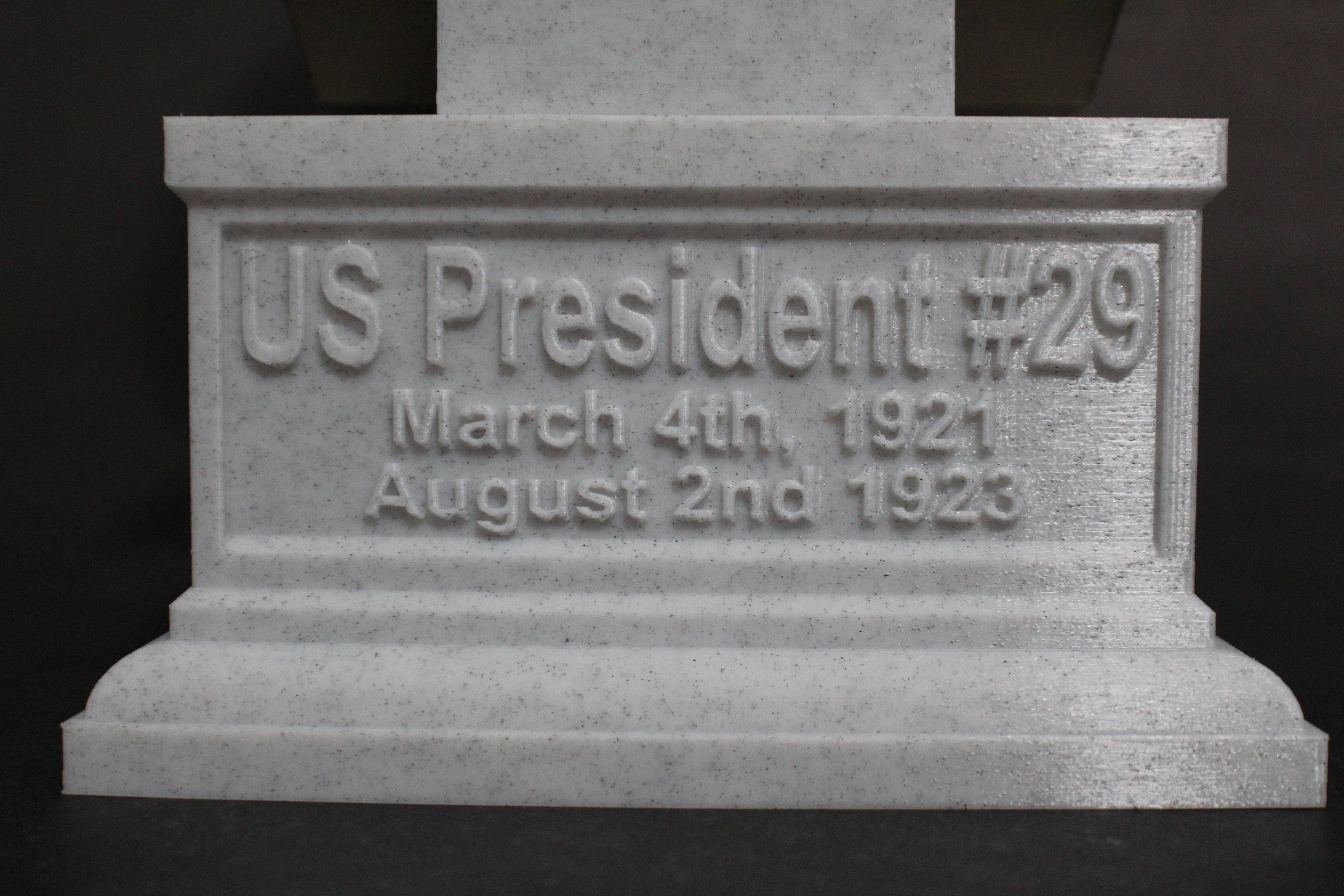 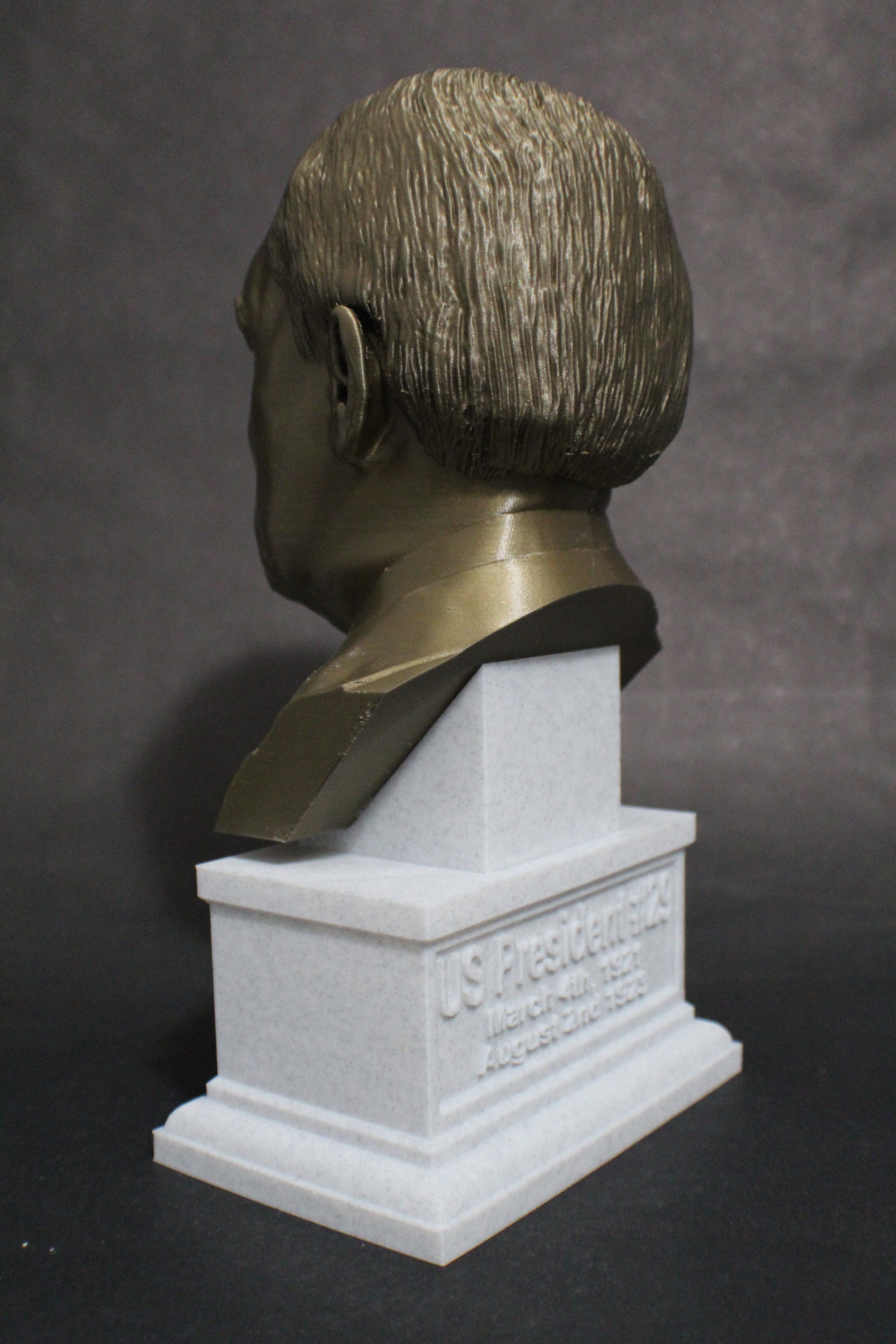 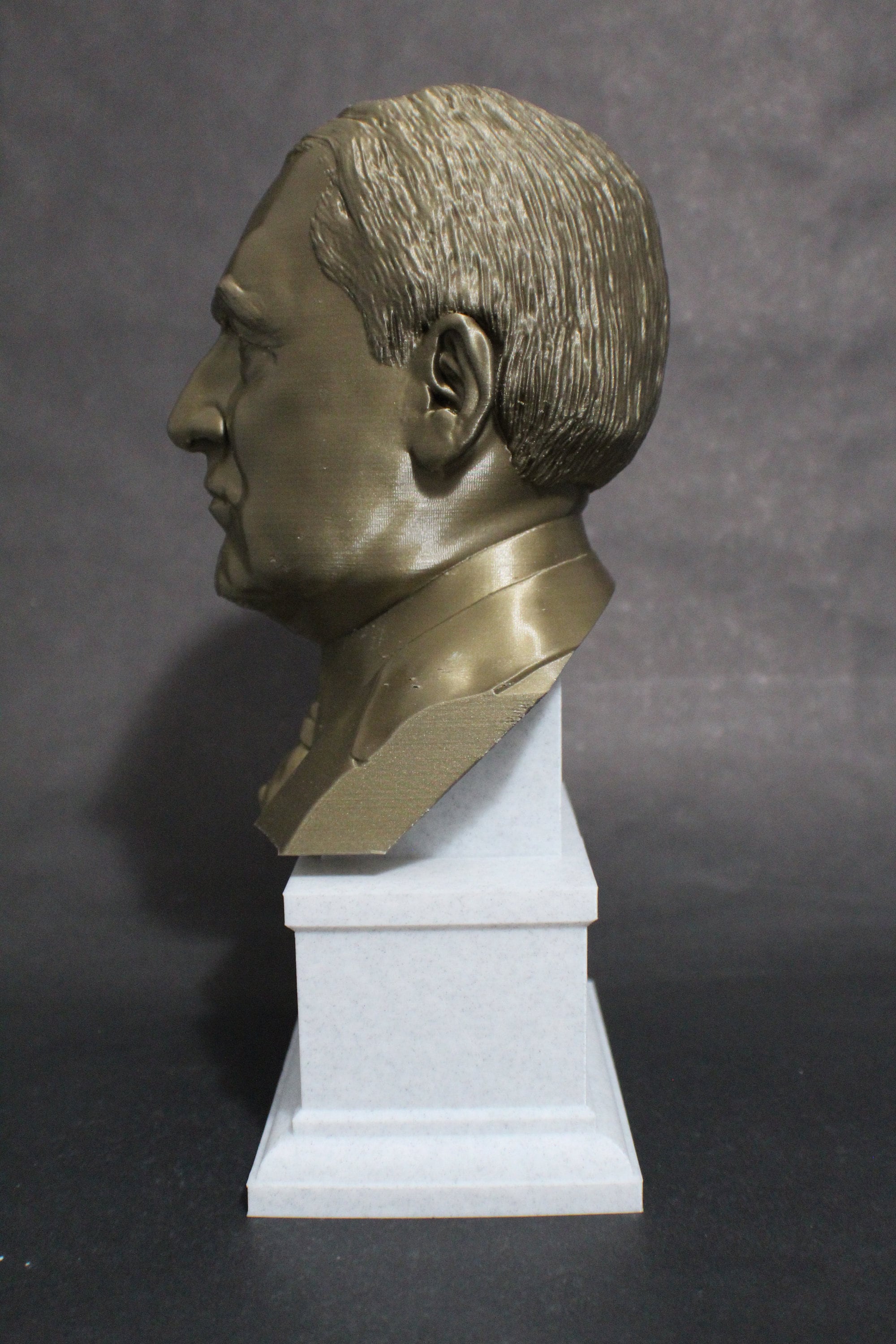 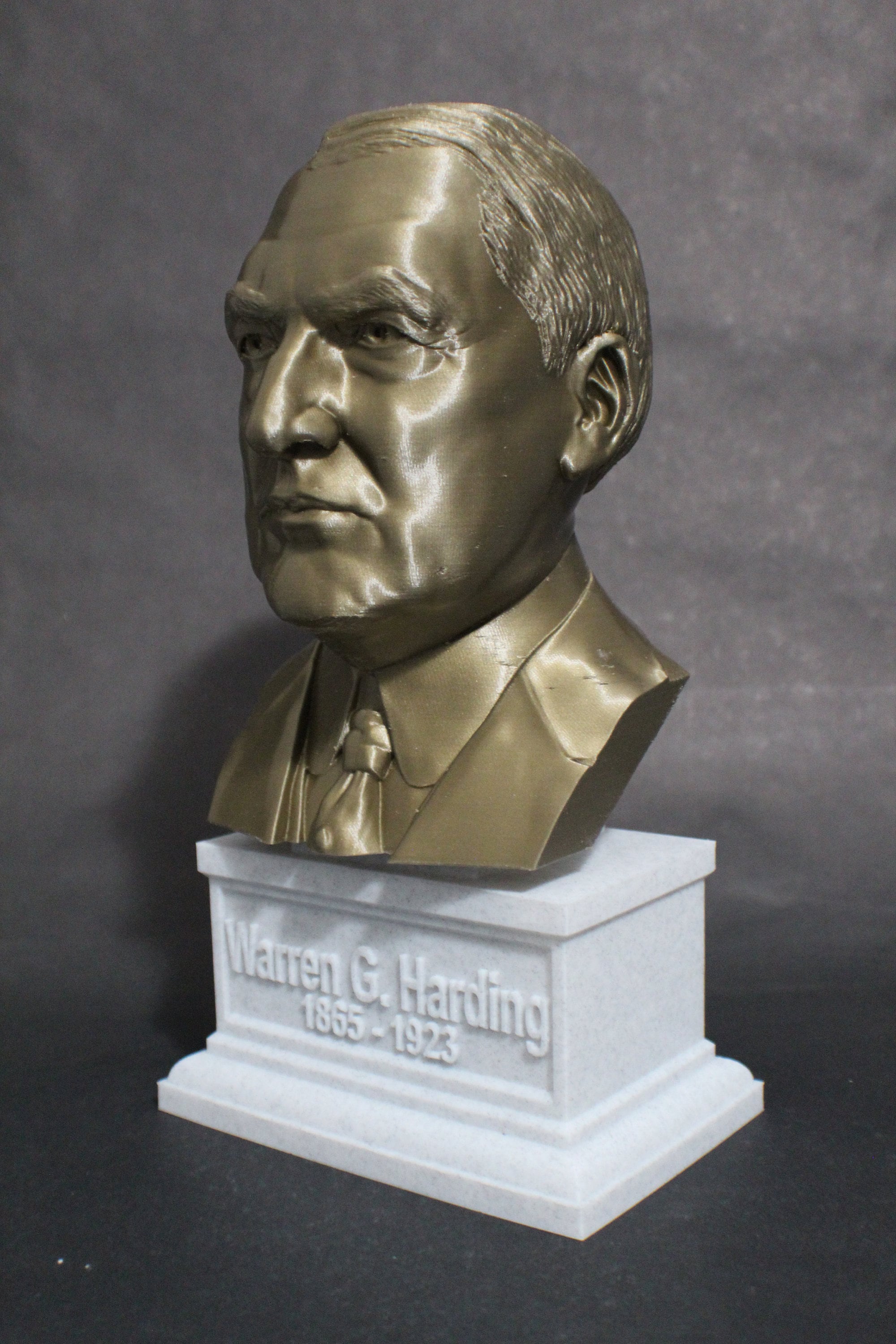 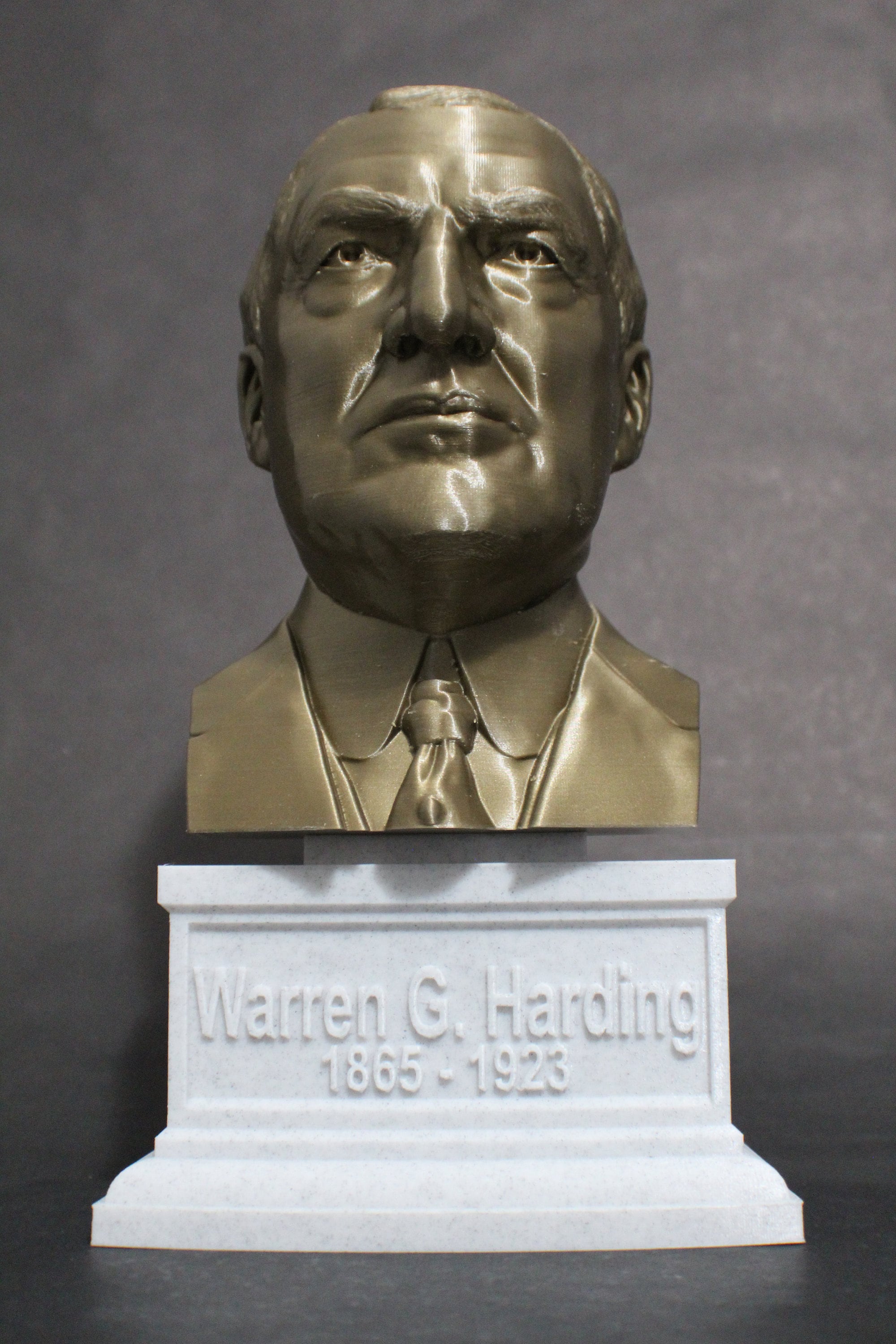 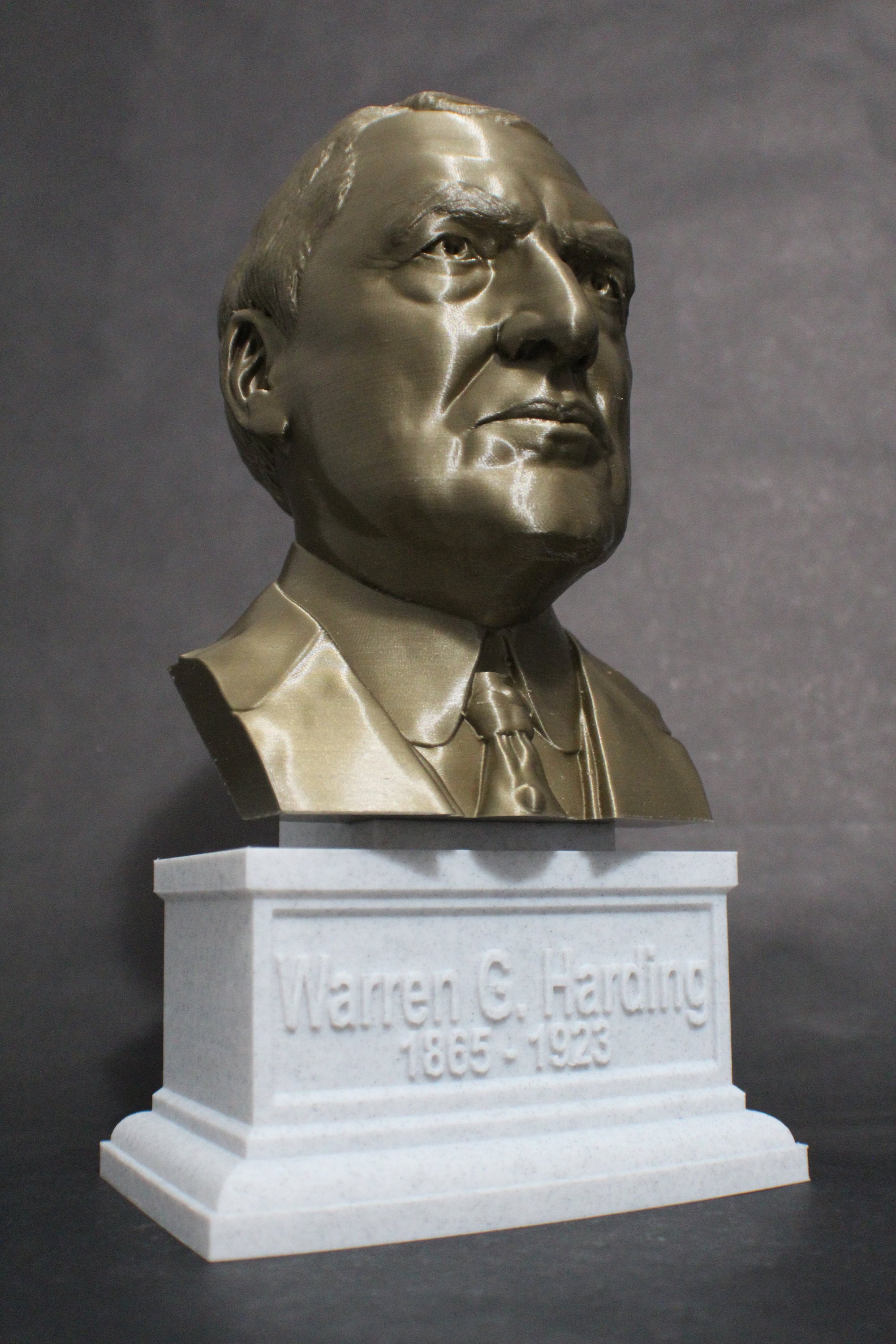 This 3D printed bust of Warren G. Harding, the twenty-ninth United States President. This one is printed in a bronze and marble PLA, giving it a realistic metal/stone look and a surprise whenever someone picks it up to discover it's actual weight. It is more durable than alabaster or plaster, and is washable with lukewarm soapy water for easy spring cleaning. It comes on a custom plinth that has his lifetime on the front, and his dates in office as president on the back.

Warren Gamaliel Harding (November 2, 1865 – August 2, 1923) was the 29th president of the United States from 1921 until his death in 1923. A member of the Republican Party, he was one of the most popular U.S. presidents to that point. After his death, a number of scandals—including Teapot Dome—came to light, as did his extramarital affair with Nan Britton; each eroded his popular regard. Harding is often rated as one of the worst presidents in historical rankings.

Harding lived in rural Ohio all his life, except when political service took him elsewhere. As a young man, he bought The Marion Star and built it into a successful newspaper. In 1899, he was elected to the Ohio State Senate; he spent four years there, then was elected lieutenant governor. He was defeated for governor in 1910, but was elected to the U.S. Senate in 1914. He ran for the Republican nomination for president in 1920, and he was considered a long shot until after the convention began. The leading candidates could not gain the needed majority, and the convention deadlocked. Harding's support gradually grew until he was nominated on the tenth ballot. He conducted a front porch campaign, remaining for the most part in Marion and allowing the people to come to him, and running on a theme of a return to normalcy of the pre-World War I period. He won in a landslide over Democrat James M. Cox and the then-imprisoned Socialist Party candidate Eugene Debs and became the first sitting senator to be elected president.

Harding appointed a number of well-regarded figures to his cabinet, including Andrew Mellon at Treasury, Herbert Hoover at the Department of Commerce, and Charles Evans Hughes at the State Department. A major foreign policy achievement came with the Washington Naval Conference of 1921–1922, in which the world's major naval powers agreed on a naval limitations program that lasted a decade. Harding released political prisoners who had been arrested for their opposition to World War I. His cabinet members Albert B. Fall (Interior Secretary) and Harry Daugherty (Attorney General) were each later tried for corruption in office; these and other scandals greatly damaged Harding's posthumous reputation. Harding died of a heart attack in San Francisco while on a western tour and was succeeded by Vice President Calvin Coolidge.