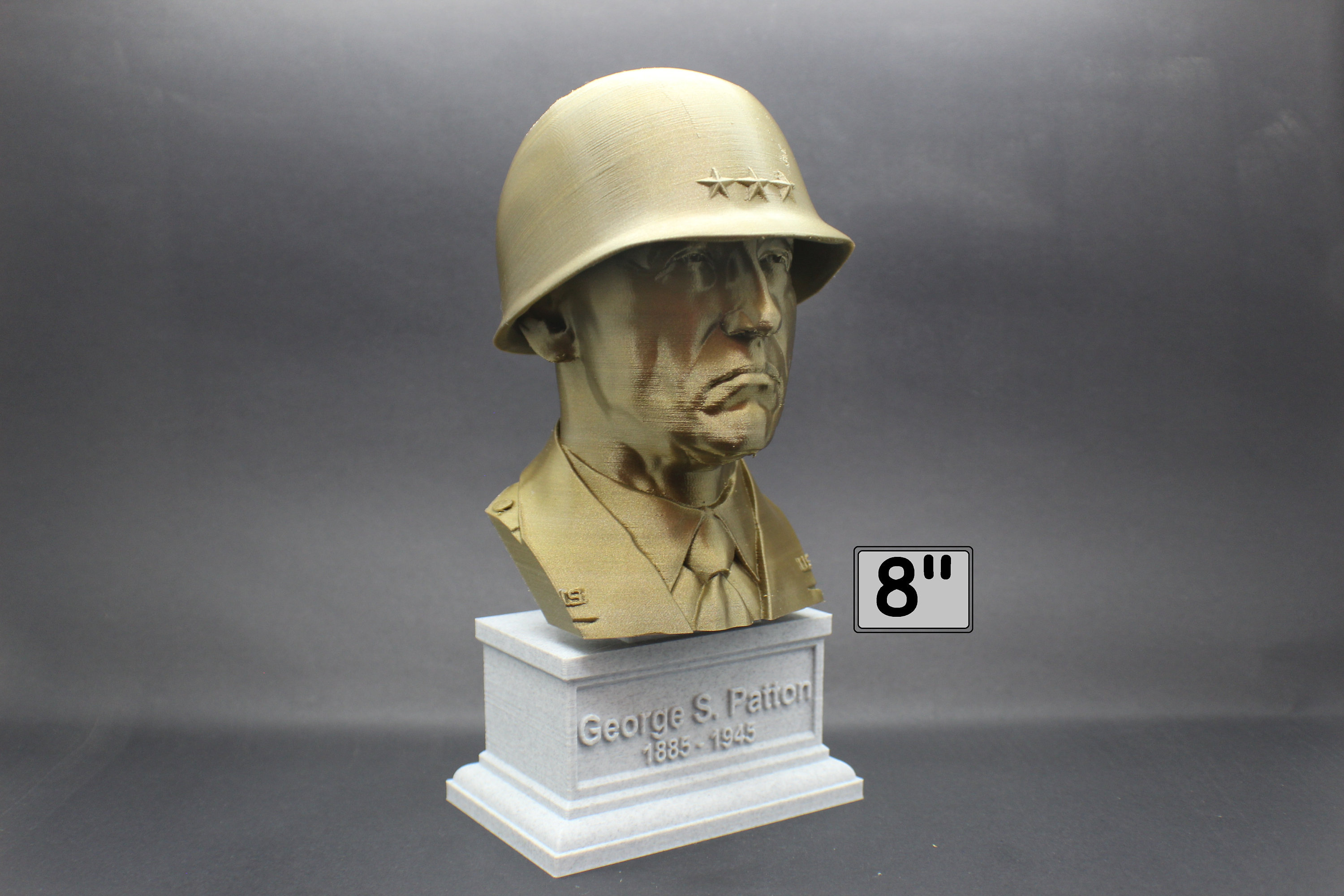 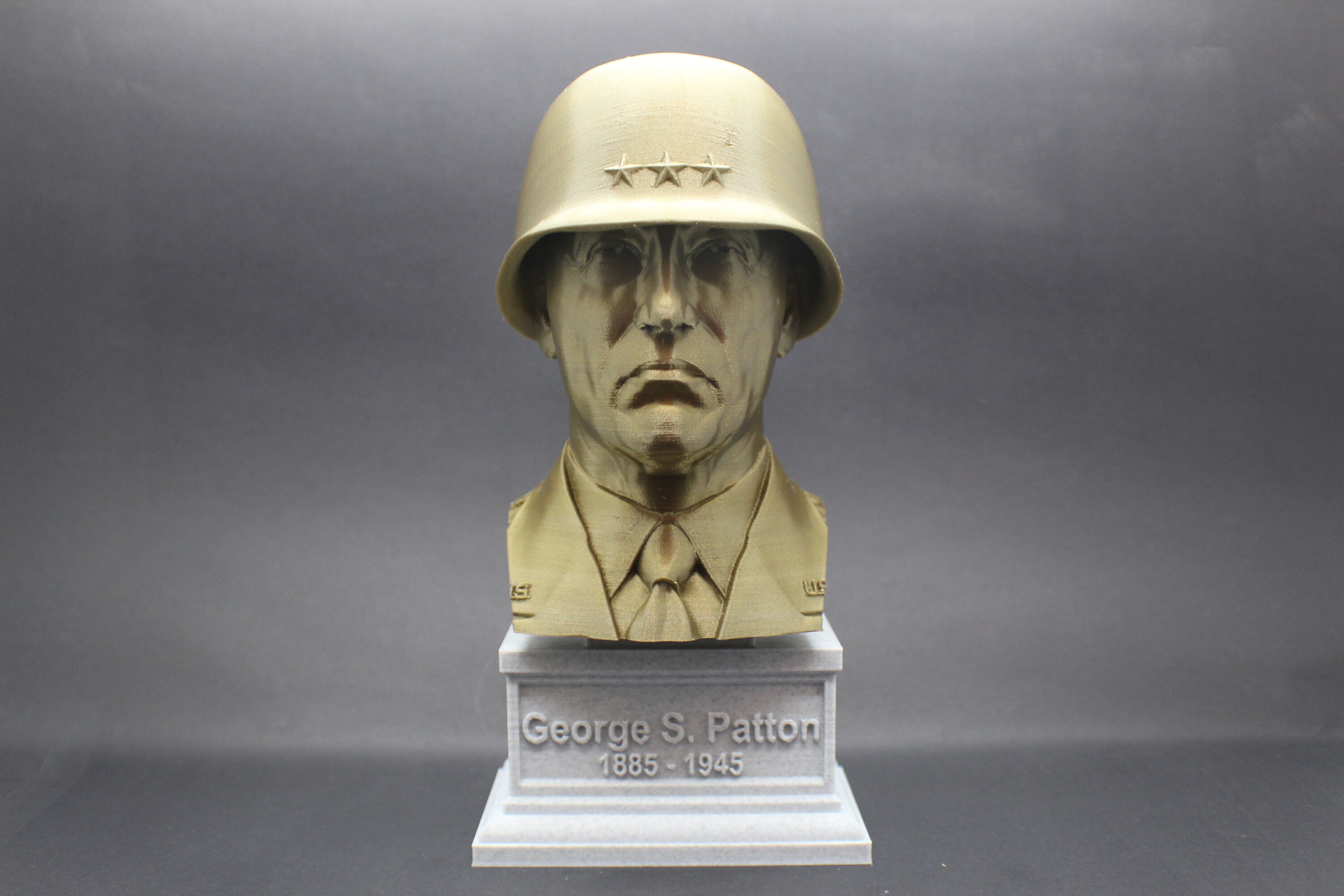 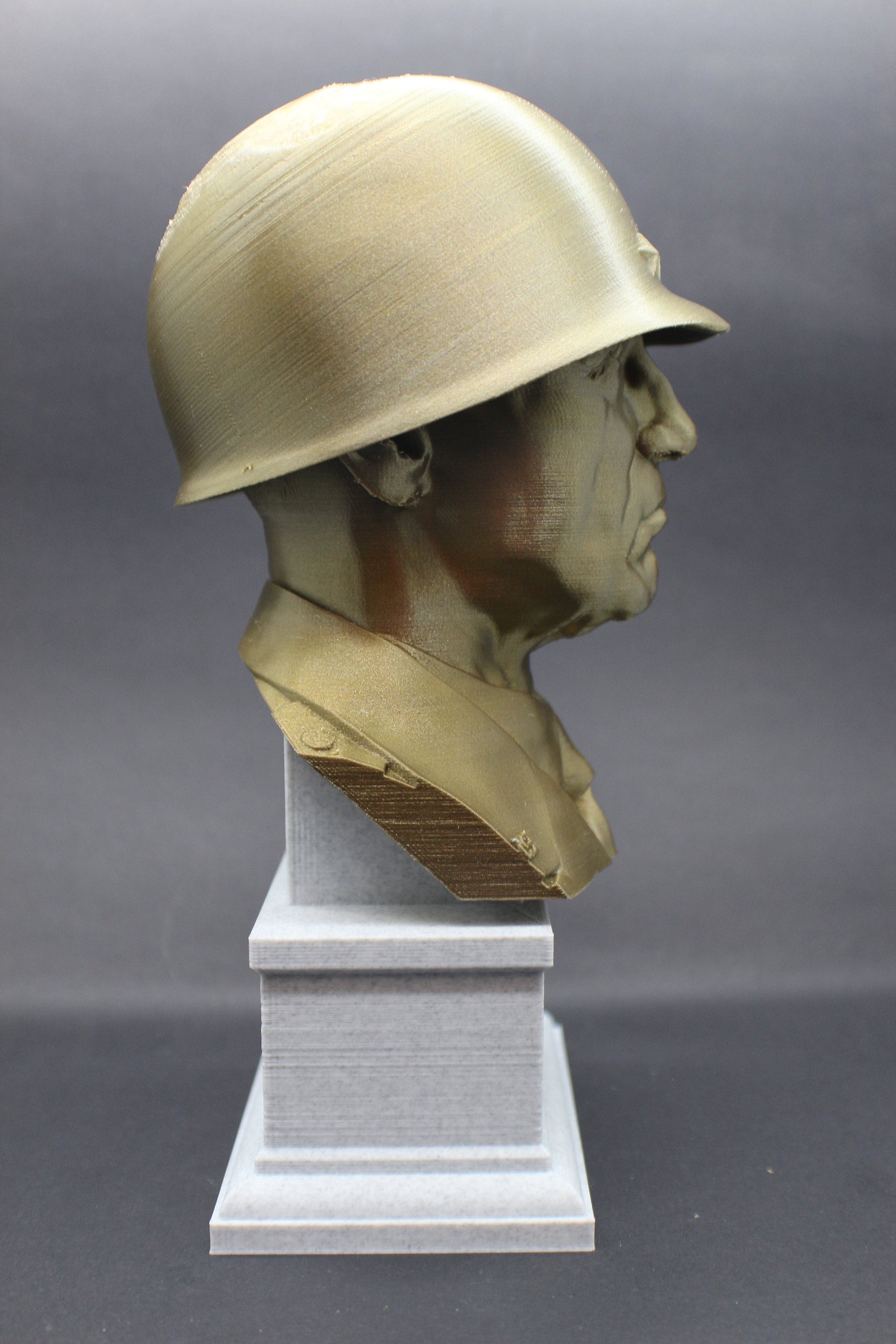 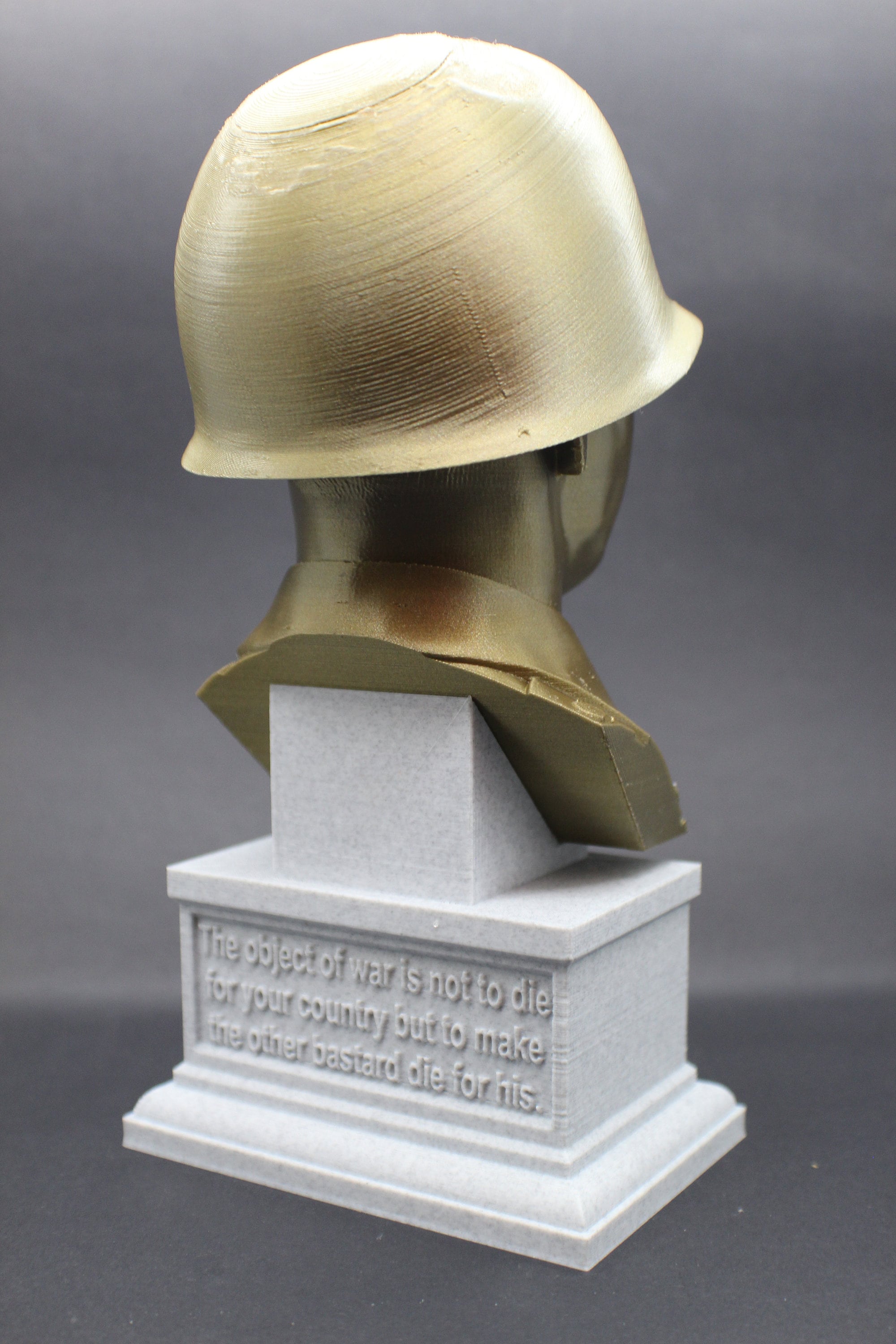 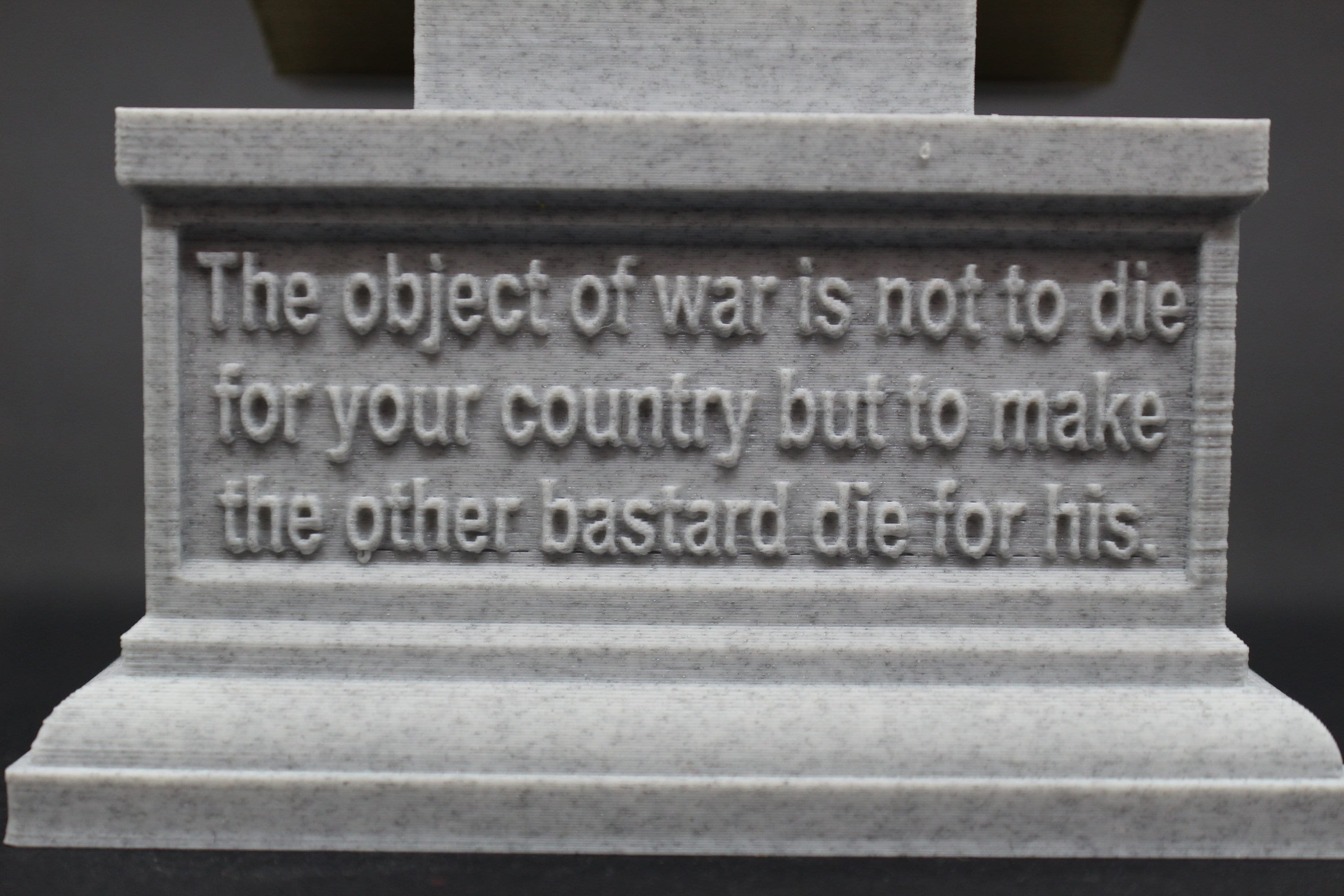 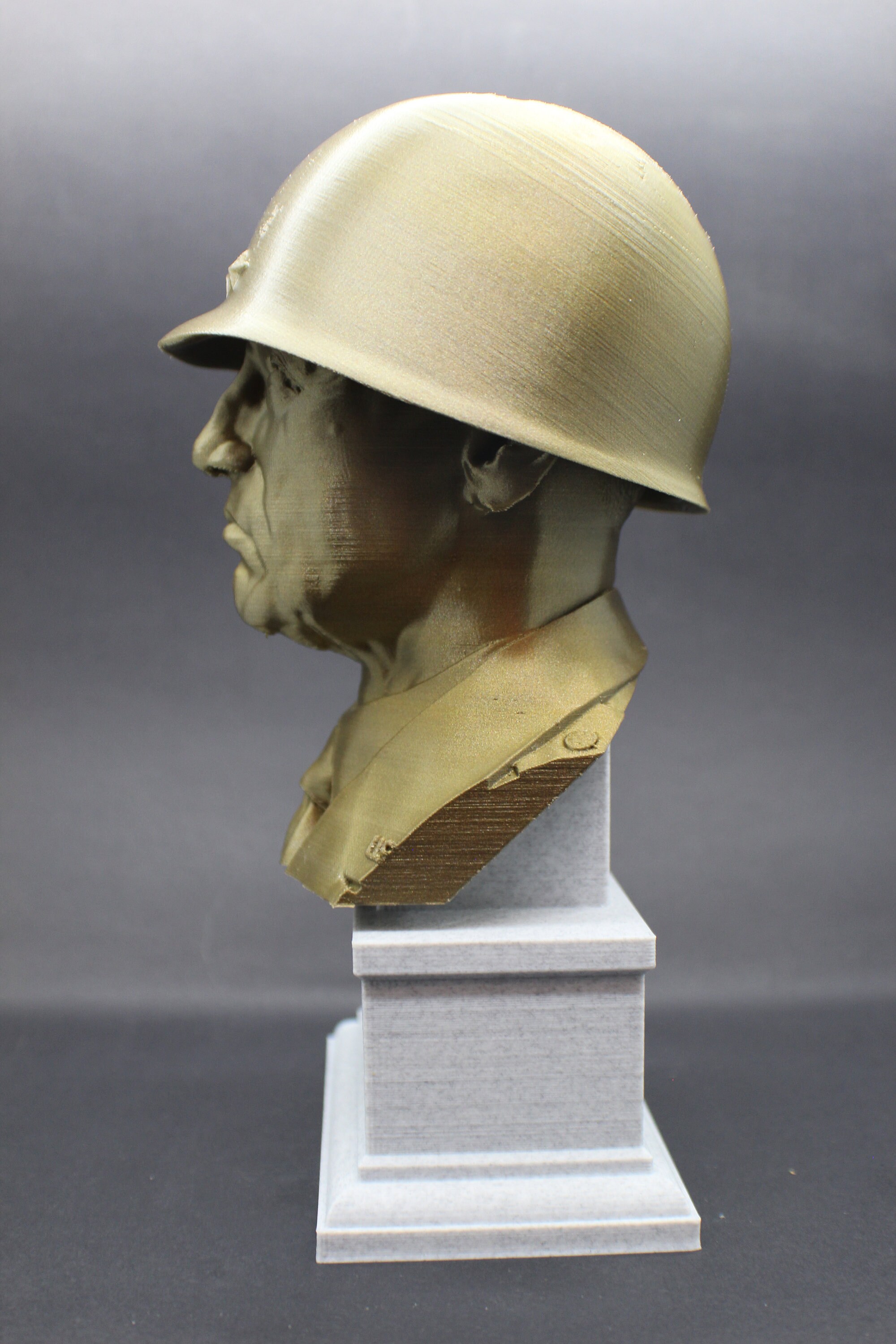 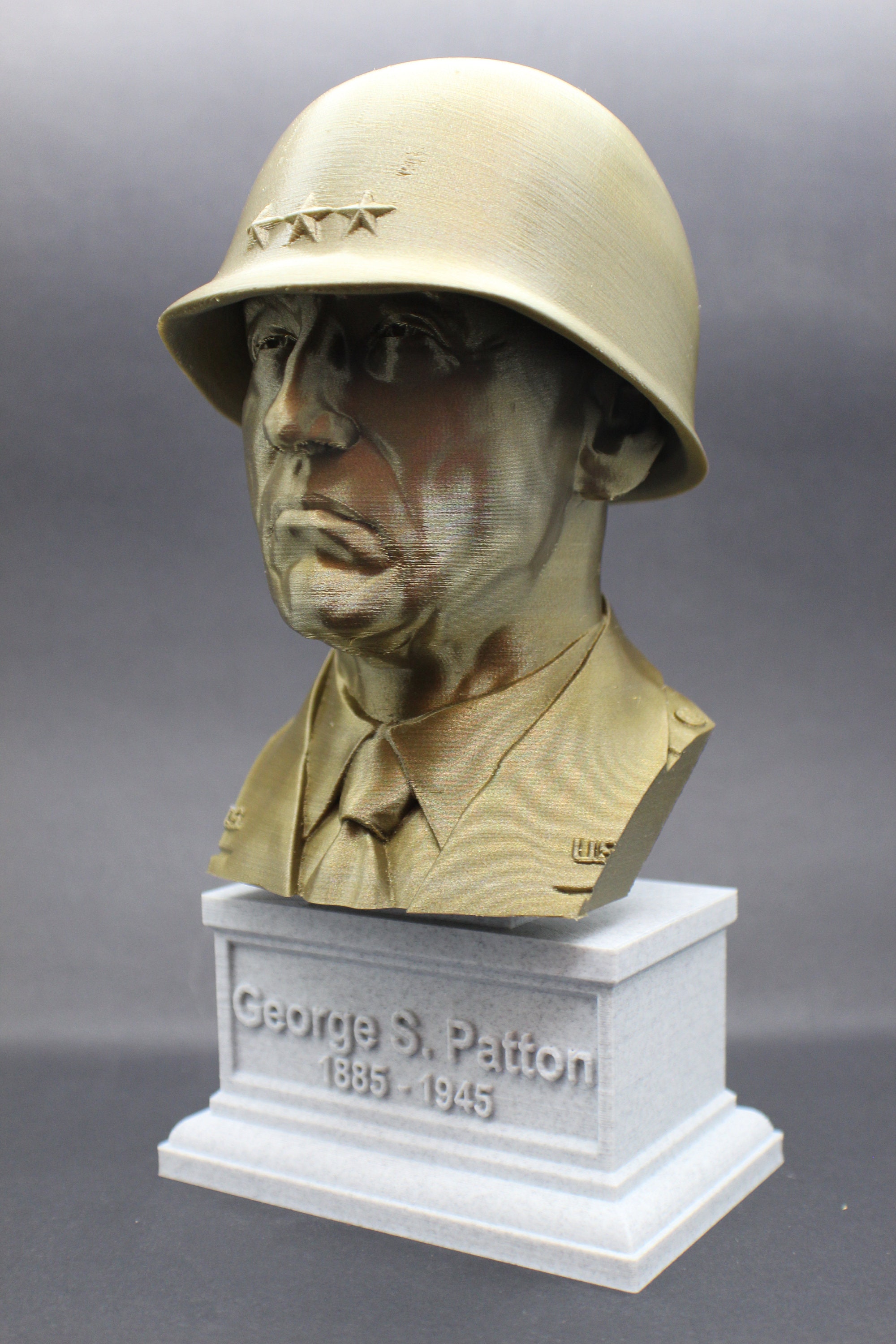 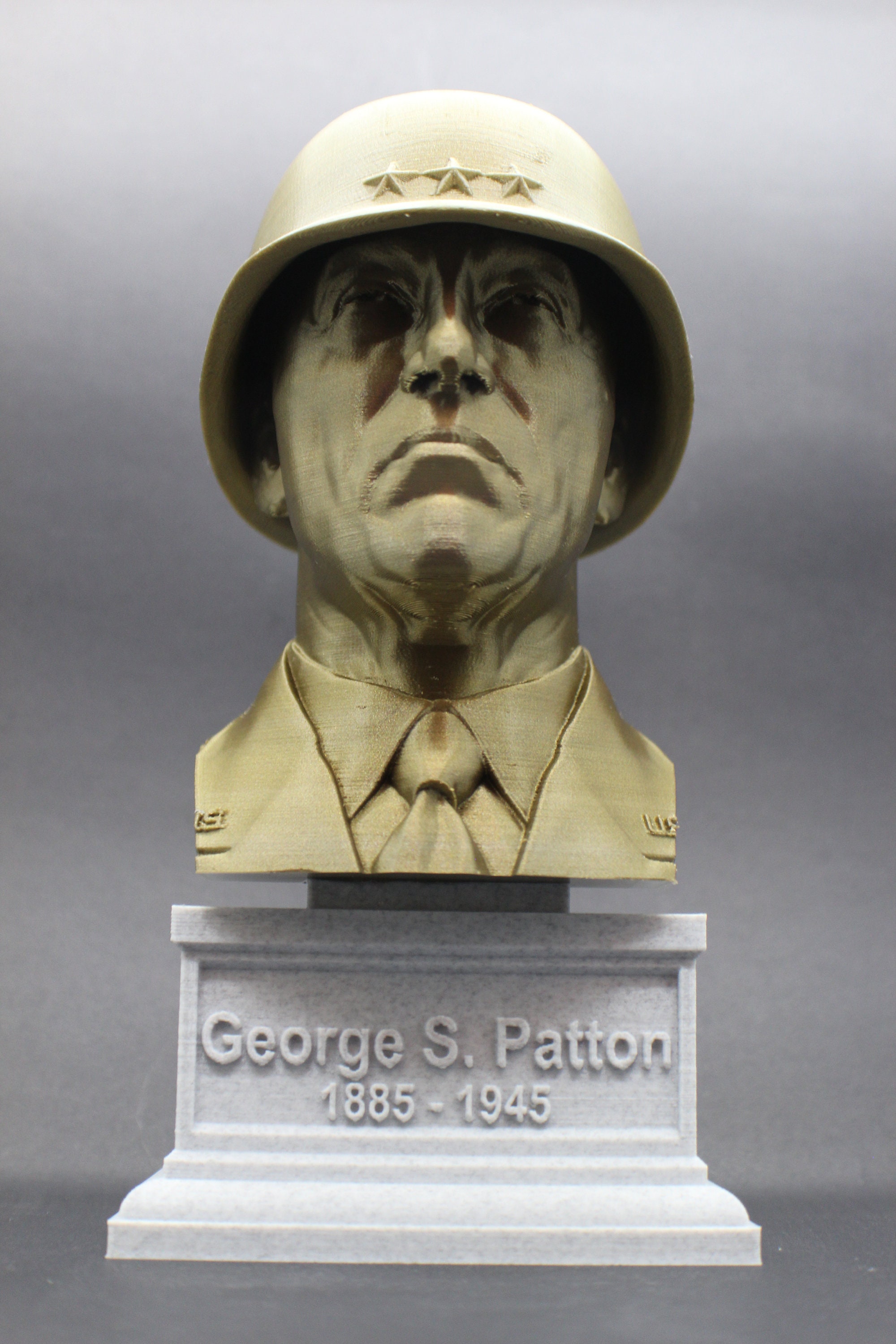 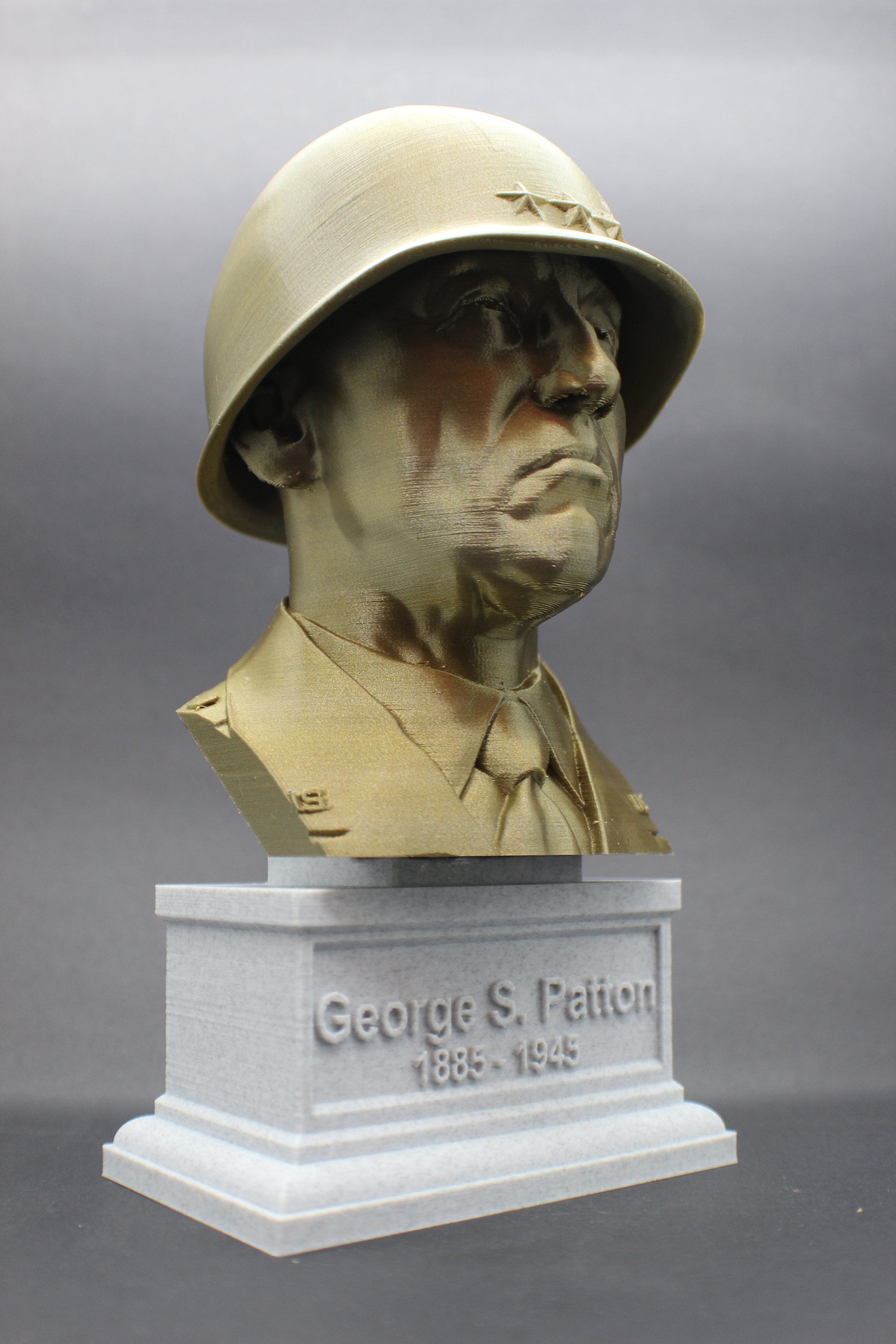 This is a 3D printed bust of George S. Patton Legendary US Army General. This one is printed in a marble and bronze PLA, giving it a realistic stone look and a surprise whenever someone picks it up to discover it's actual weight. It is more durable than alabaster or plaster, and is washable with lukewarm soapy water for easy spring cleaning. It comes on a custom plinth that has his lifetime on the front, and the quote:

"The object of war is not to die for your country but to make the other bastard die for his."

Quality note: The back of his helmet has minor dimples and marks due to the geometry of it and the technology I use to make it. I hid it in the back so that it is not in view from the front or oblique angles.

It stands 8 inches tall, about 3.5 inches wide, and 4 inches deep. If you'd like different information on the back or front, please put it in your comment when you check out. If you'd like a 12" version like my presidential busts for $63.99, please use the "request custom order" button.

Born in 1885 to a family whose members had served in the United States and Confederate States armies, Patton attended the Virginia Military Institute and the U.S. Military Academy at West Point. He studied fencing and designed the M1913 Cavalry Saber, more commonly known as the "Patton Saber", and competed in modern pentathlon in the 1912 Summer Olympics in Stockholm, Sweden.

Patton first saw combat during 1916's Pancho Villa Expedition, America's first military action using motor vehicles. He saw action in World War I as part of the new United States Tank Corps of the American Expeditionary Forces: he commanded the U.S. tank school in France, then led tanks into combat and was wounded near the end of the war. In the interwar period, Patton became a central figure in the development of the Army's armored warfare doctrine, serving in numerous staff positions throughout the country. At the American entry into World War II, he commanded the 2nd Armored Division.

Patton led U.S. troops into the Mediterranean theater with an invasion of Casablanca during Operation Torch in 1942, and soon established himself as an effective commander by rapidly rehabilitating the demoralized U.S. II Corps. He commanded the U.S. Seventh Army during the Allied invasion of Sicily, where he was the first Allied commander to reach Messina. There he was embroiled in controversy after he slapped two shell-shocked soldiers, and was temporarily removed from battlefield command. He then was assigned a key role in Operation Fortitude, the Allies' disinformation campaign for Operation Overlord. At the start of the Western Allied invasion of France, Patton was given command of the Third Army, which conducted a highly successful rapid armored drive across France. Under his decisive leadership, the Third Army took the lead in relieving beleaguered American troops at Bastogne during the Battle of the Bulge, after which his forces drove deep into Nazi Germany by the end of the war.

During the Allied occupation of Germany, Patton was named military governor of Bavaria, but was relieved for making aggressive statements towards the Soviet Union and trivializing denazification. He commanded the United States Fifteenth Army for slightly more than two months. Severely injured in an auto accident, he died in Germany twelve days later, on December 21, 1945.

Patton's colorful image, hard-driving personality and success as a commander were at times overshadowed by his controversial public statements. His philosophy of leading from the front, and his ability to inspire troops with attention-getting, vulgarity-ridden speeches, such as his famous address to the Third Army, was met favorably by his troops, but much less so by a sharply divided Allied high command. His emphasis on rapid and aggressive offensive action proved effective, and he was regarded highly by his opponents in the German High Command. An award-winning biographical film released in 1970, Patton, helped solidify his image as an American folk hero.