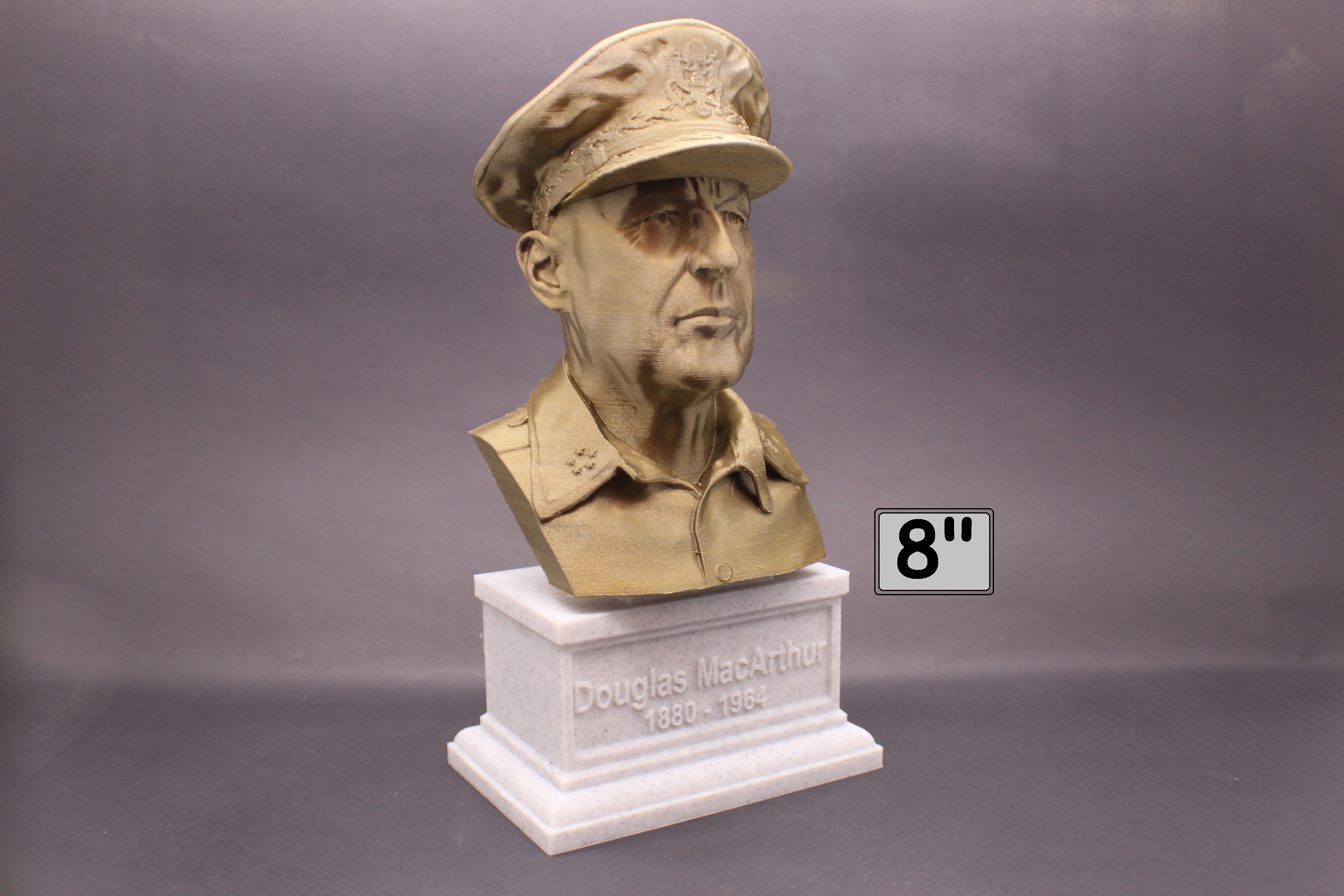 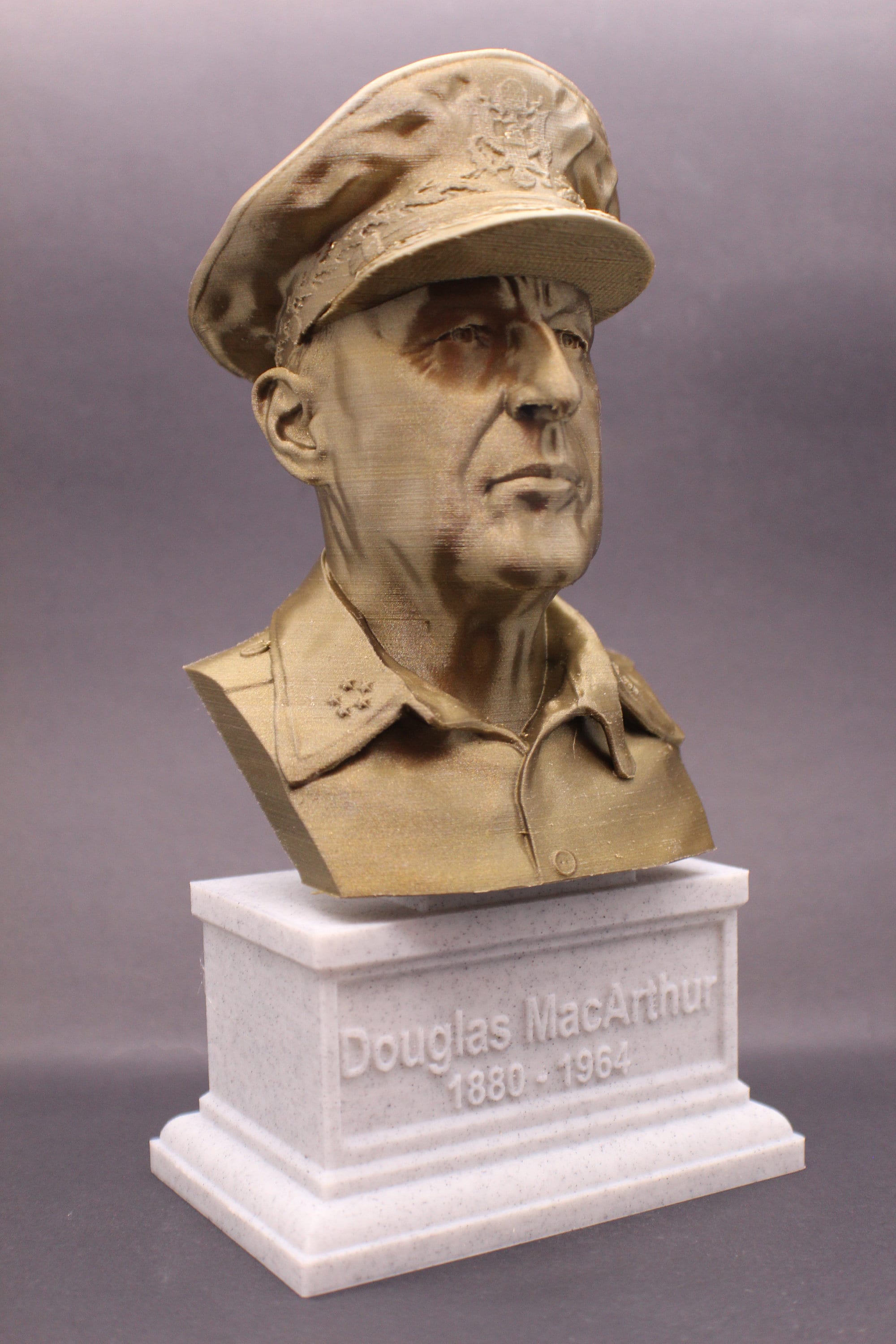 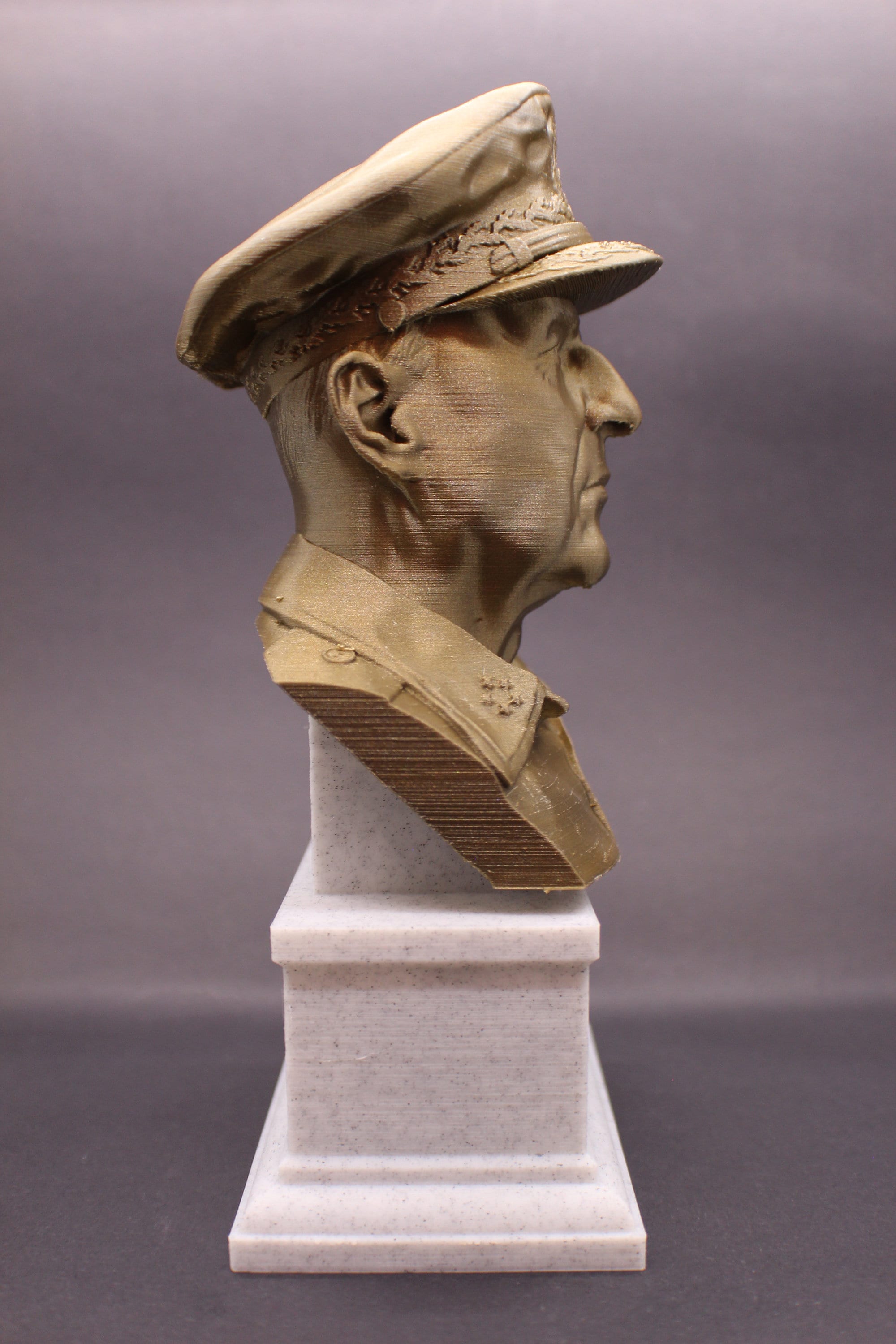 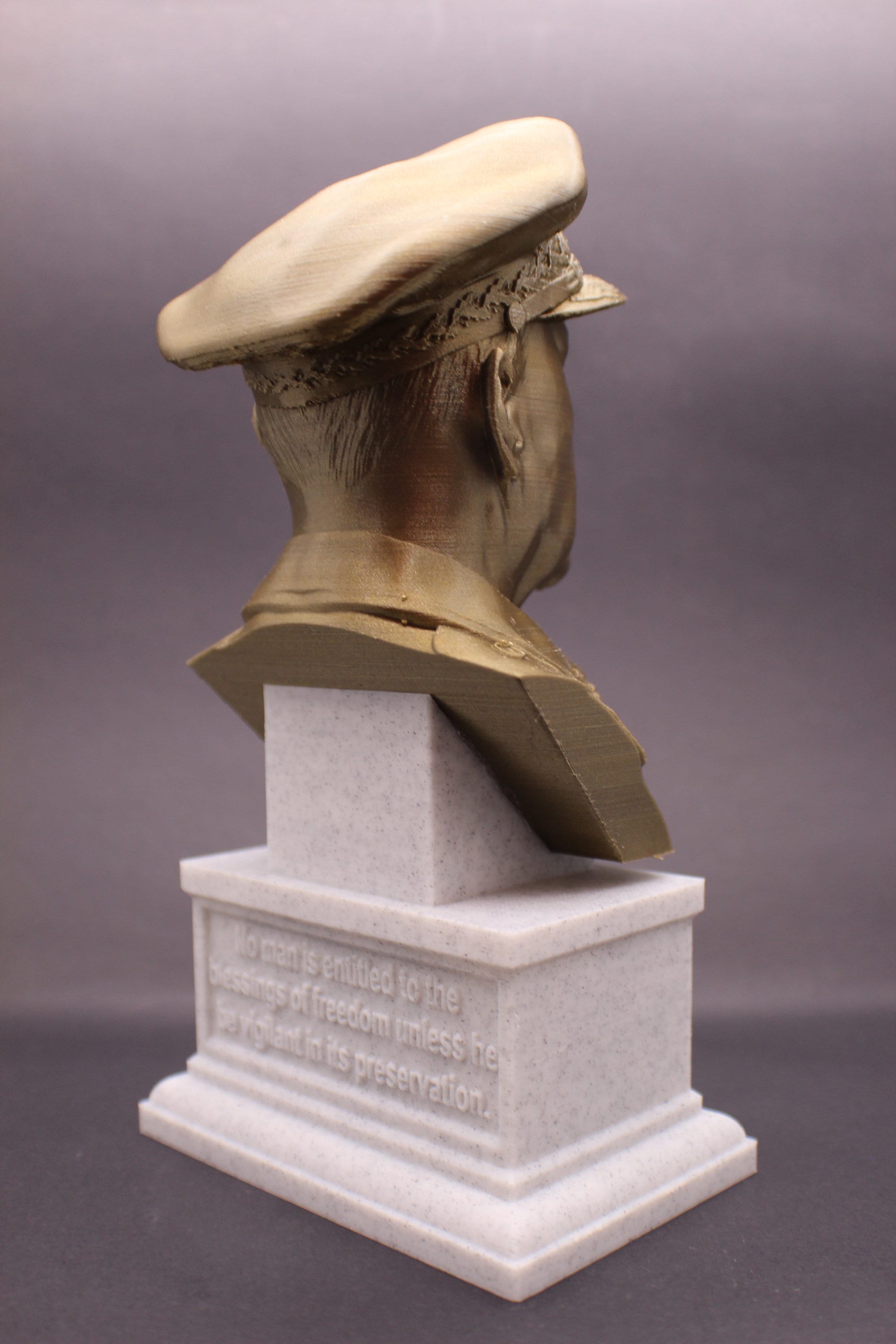 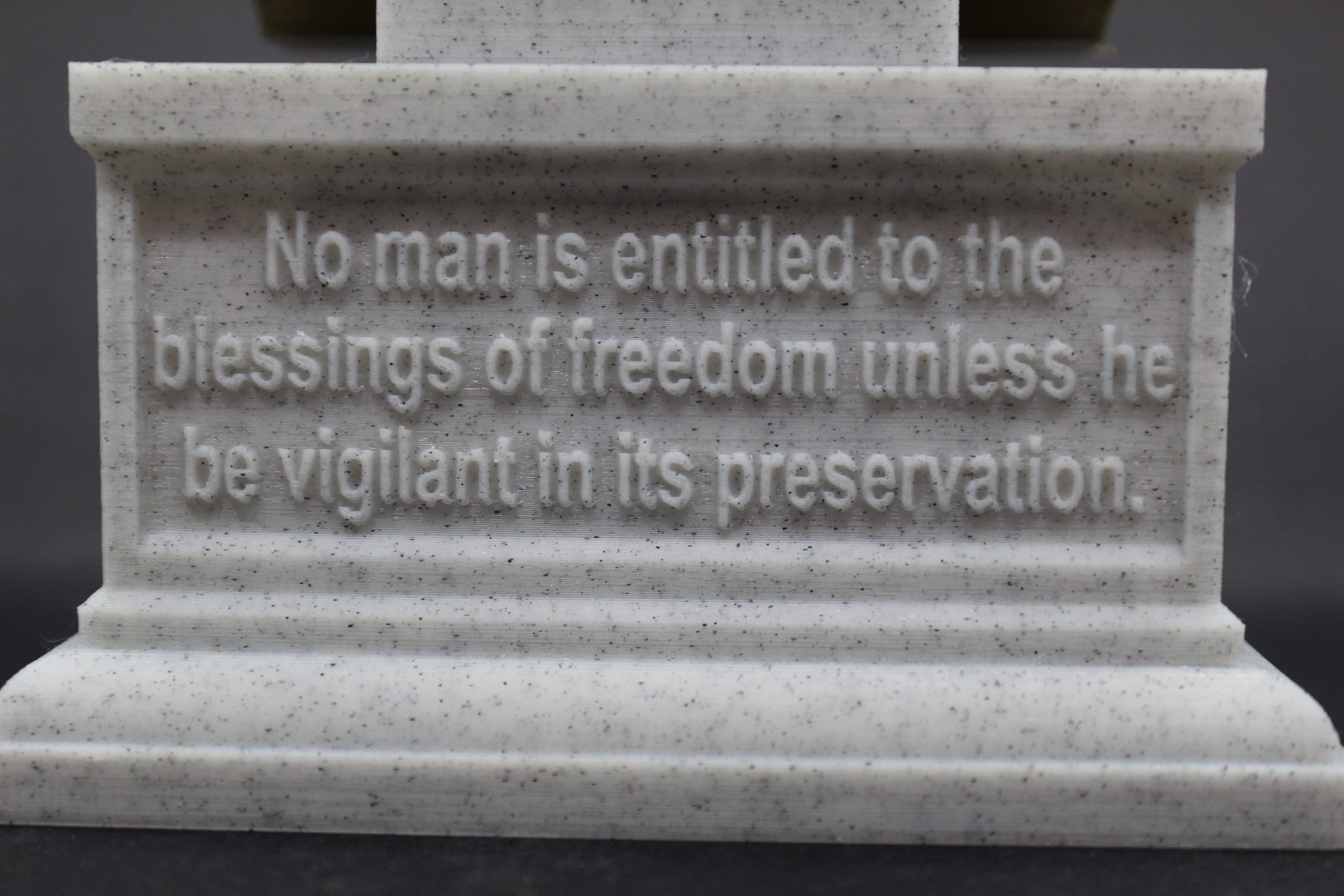 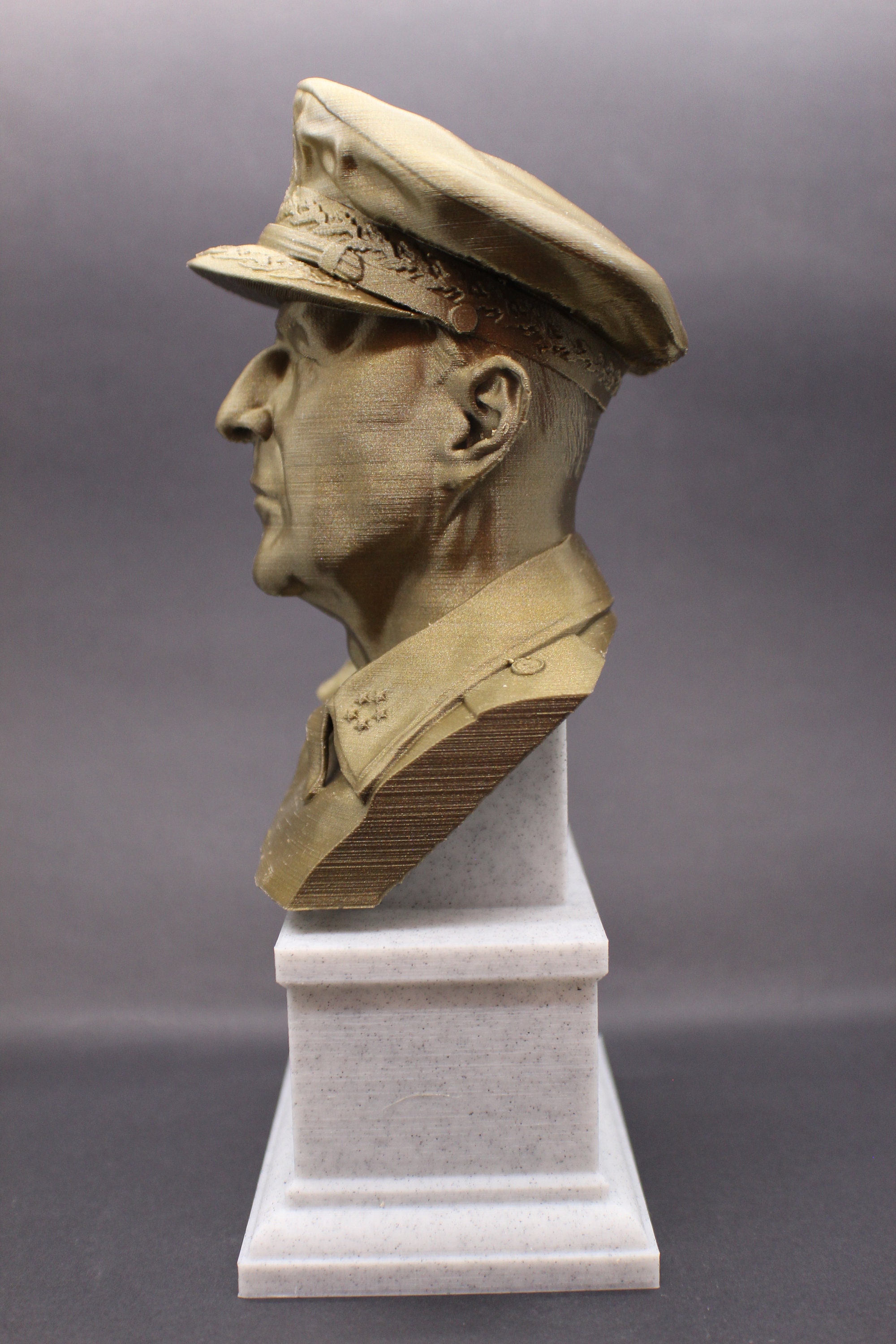 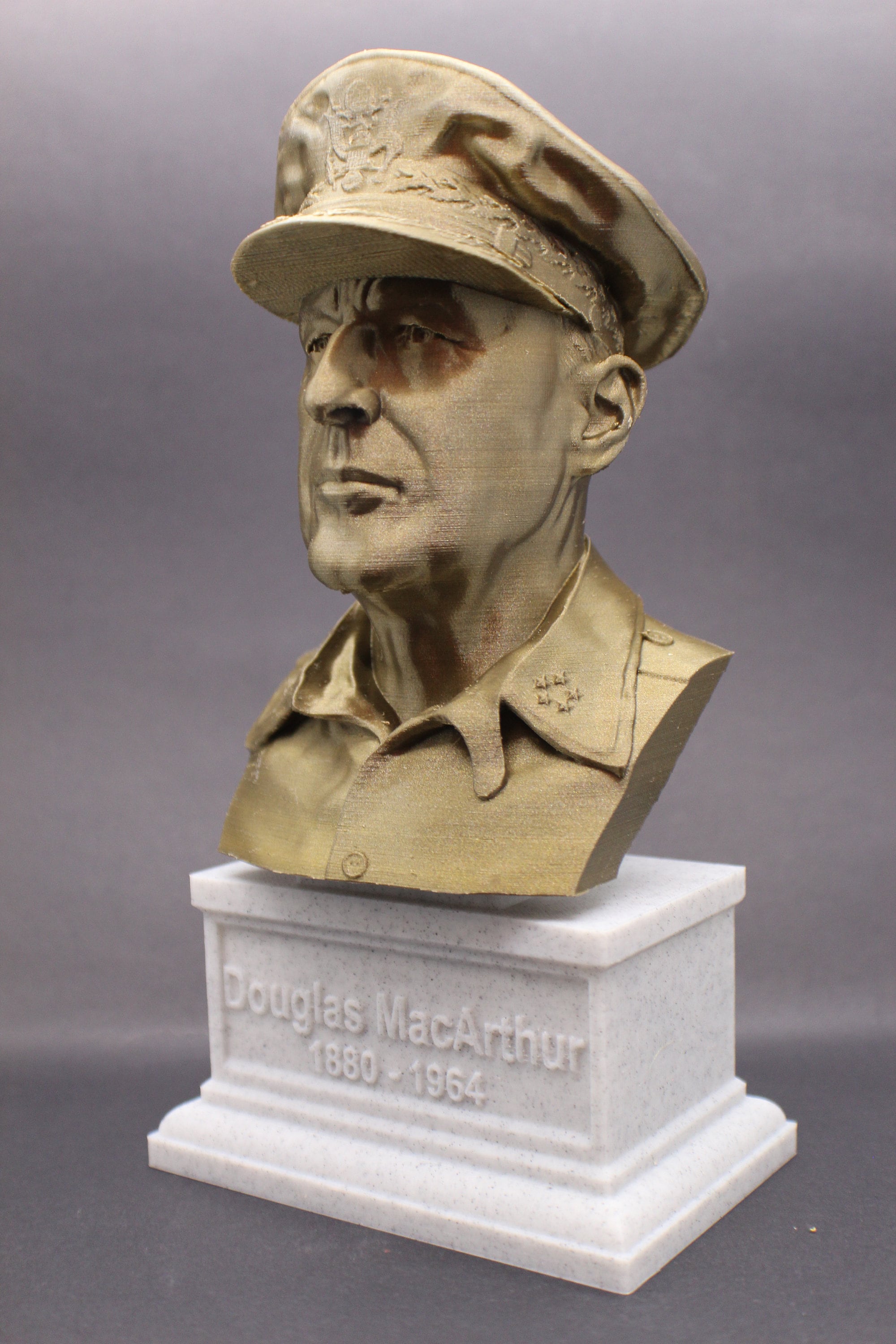 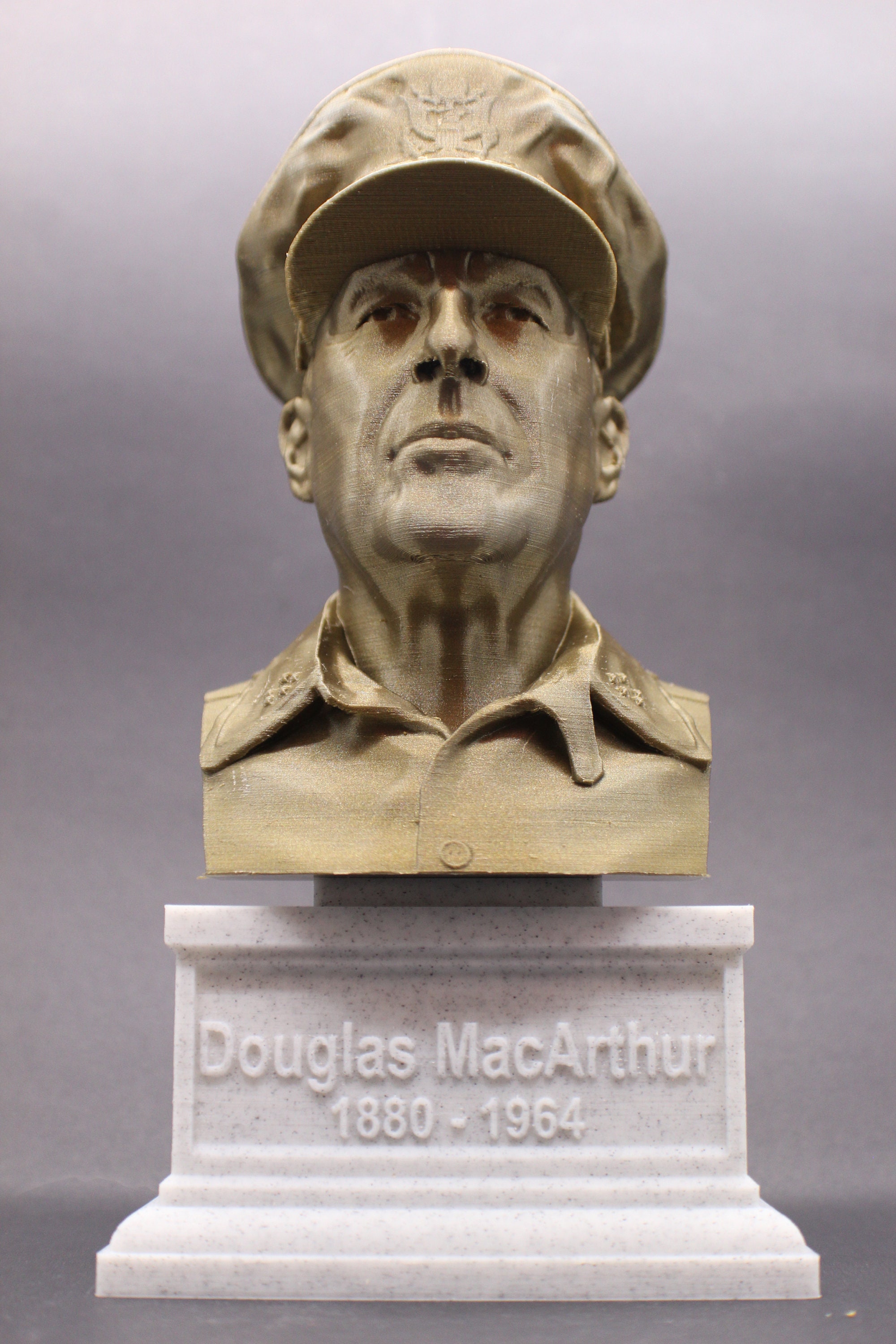 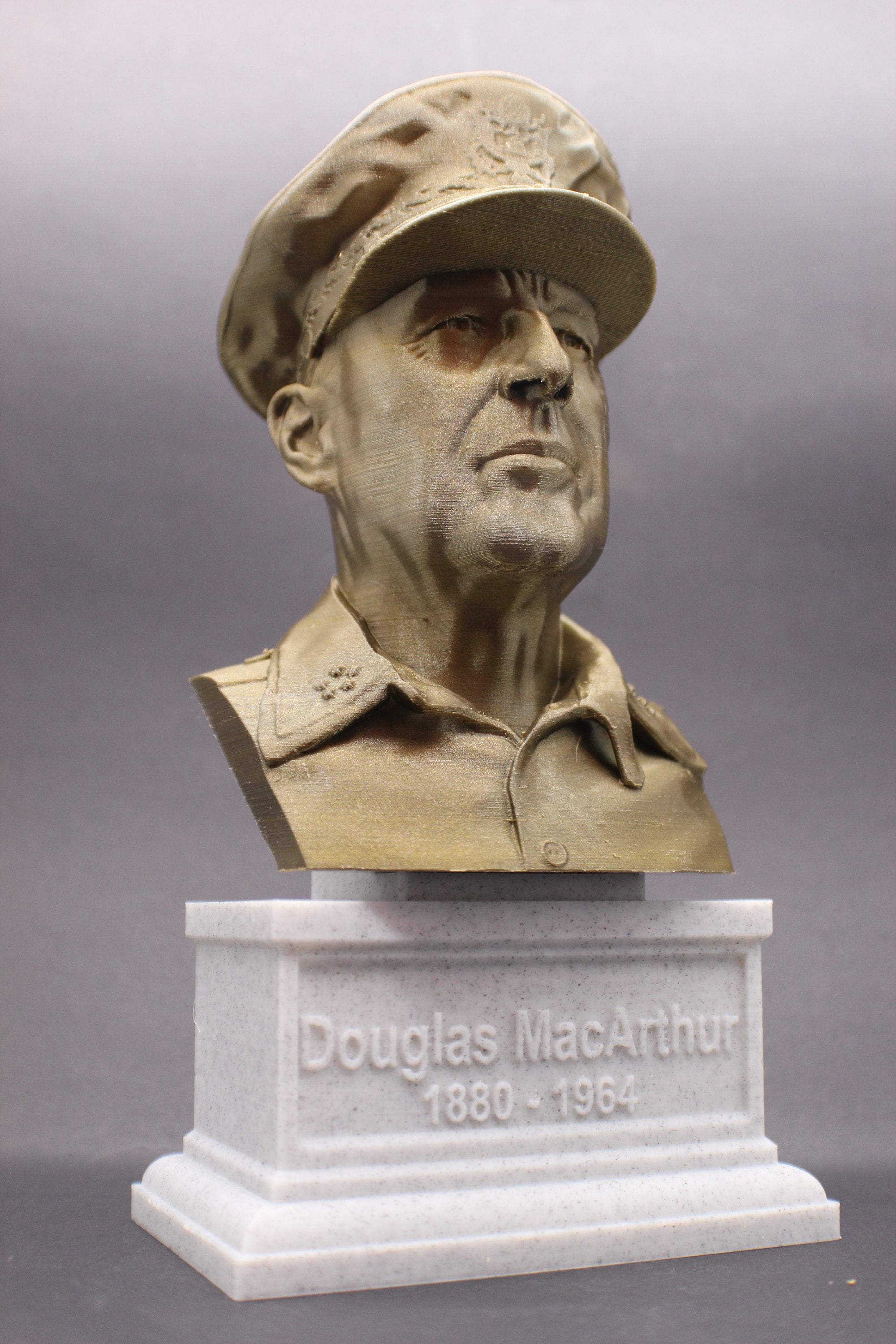 This is a 3D printed bust of Douglas MacAurthur Legendary US Army General. This one is printed in a marble and bronze PLA, giving it a realistic stone look and a surprise whenever someone picks it up to discover it's actual weight. It is more durable than alabaster or plaster, and is washable with lukewarm soapy water for easy spring cleaning. It comes on a custom plinth that has his lifetime on the front, and the quote:

It stands 8 inches tall, about 3.5 inches wide, and 4 inches deep. If you'd like different information on the back or front, please put it in your comment when you check out. If you'd like a 12" version like my presidential busts for $63.99, please use the "request custom order" button.

Raised in a military family in the American Old West, MacArthur was valedictorian at the West Texas Military Academy where he finished high school, and First Captain at the United States Military Academy at West Point, where he graduated top of the class of 1903. During the 1914 United States occupation of Veracruz, he conducted a reconnaissance mission, for which he was nominated for the Medal of Honor. In 1917, he was promoted from major to colonel and became chief of staff of the 42nd (Rainbow) Division. In the fighting on the Western Front during World War I, he rose to the rank of brigadier general, was again nominated for a Medal of Honor, and was awarded the Distinguished Service Cross twice and the Silver Star seven times.

From 1919 to 1922, MacArthur served as Superintendent of the U.S. Military Academy at West Point, where he attempted a series of reforms. His next assignment was in the Philippines, where in 1924 he was instrumental in quelling the Philippine Scout Mutiny. In 1925, he became the Army's youngest major general. He served on the court-martial of Brigadier General Billy Mitchell and was president of the American Olympic Committee during the 1928 Summer Olympics in Amsterdam. In 1930, he became Chief of Staff of the United States Army. As such, he was involved in the expulsion of the Bonus Army protesters from Washington, D.C. in 1932, and the establishment and organization of the Civilian Conservation Corps. He retired from the US Army in 1937 to become Military Advisor to the Commonwealth Government of the Philippines.

MacArthur was recalled to active duty in 1941 as commander of United States Army Forces in the Far East. A series of disasters followed, starting with the destruction of his air forces on 8 December 1941 and the Japanese invasion of the Philippines. MacArthur's forces were soon compelled to withdraw to Bataan, where they held out until May 1942. In March 1942, MacArthur, his family and his staff left nearby Corregidor Island in PT boats and escaped to Australia, where MacArthur became Supreme Commander, Southwest Pacific Area. Upon his arrival, MacArthur gave a speech in which he famously promised "I shall return" to the Philippines. After more than two years of fighting in the Pacific, he fulfilled that promise. For his defense of the Philippines, MacArthur was awarded the Medal of Honor. He officially accepted the surrender of Japan on 2 September 1945 aboard the USS Missouri, which was anchored in Tokyo Bay, and he oversaw the occupation of Japan from 1945 to 1951. As the effective ruler of Japan, he oversaw sweeping economic, political and social changes. He led the United Nations Command in the Korean War with initial success; however, the controversial invasion of North Korea provoked Chinese intervention, and a series of major defeats. MacArthur was contentiously removed from command by President Harry S. Truman on 11 April 1951. He later became chairman of the board of Remington Rand.